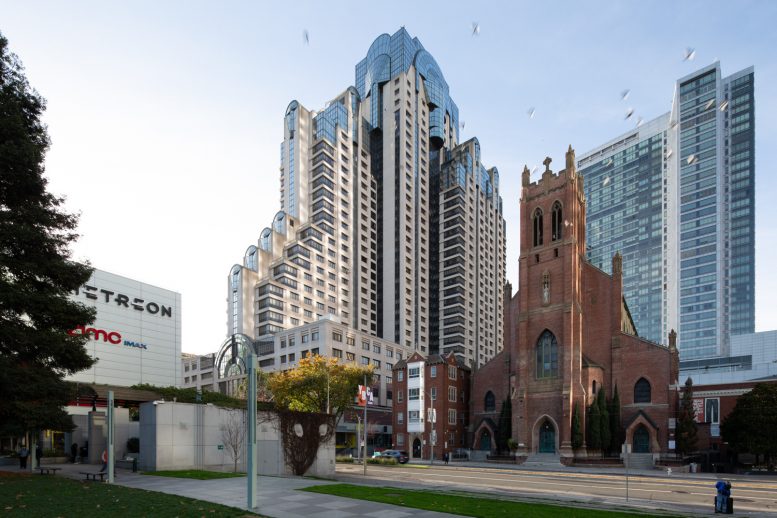 The Marriott Marquis at 55 Fourth Street in SoMa is the 47th tallest tower in SFYIMBY’s Countdown of the 52 tallest buildings planned or built in the Bay Area. This asymmetrical tower stands as the most prominent postmodernist skyscraper in the city and an enduring icon in the skyline. The hotel was completed in 1989 with a rooftop height of 436 feet. 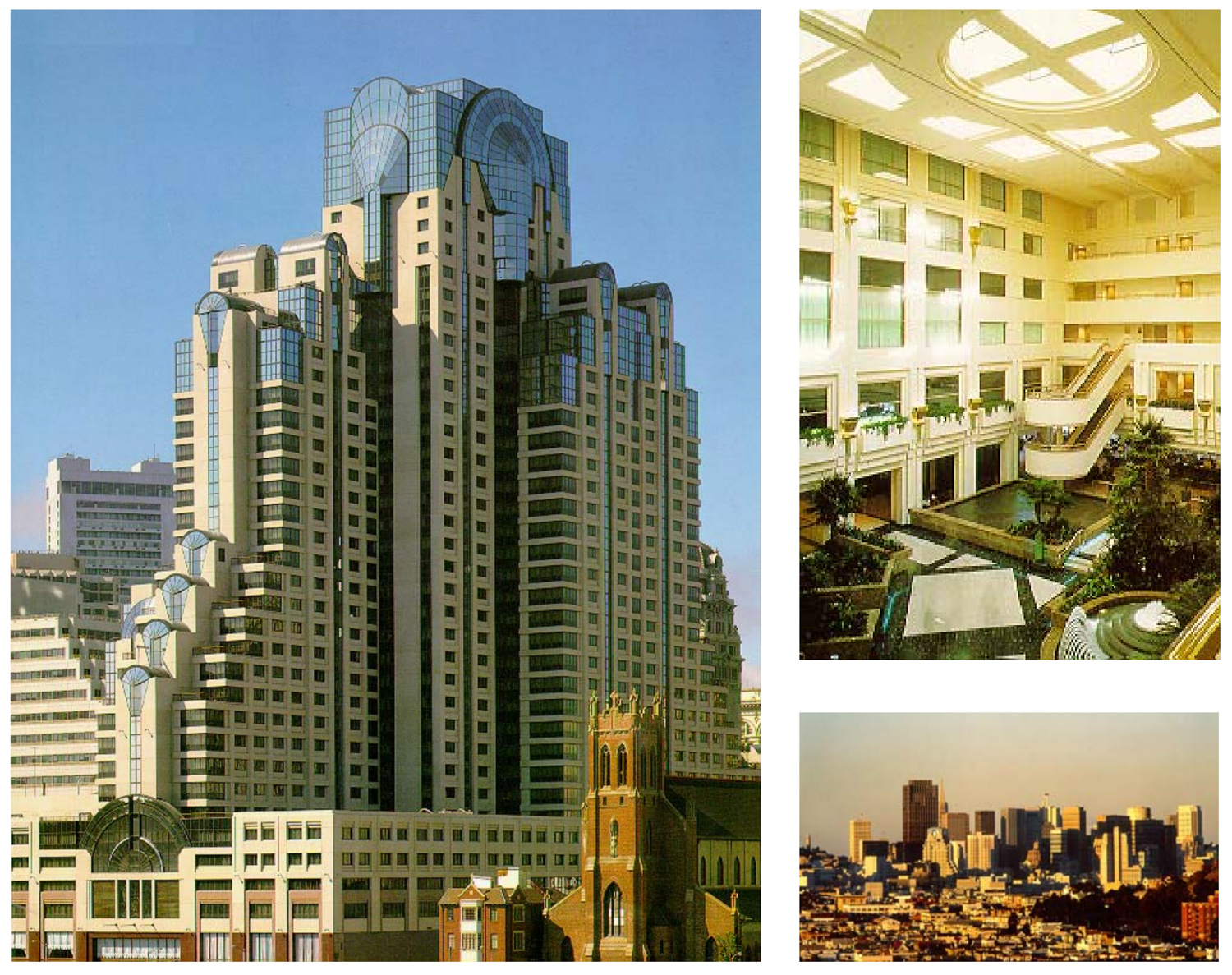 Marriott opened at 55 Fourth street on October 17th, 1989. The day has since become an unforgettable moment in the city’s history, not for the hotel but the tragic 6.9 magnitude Loma Prieta earthquake. After being the home of an adventurous coyote for a full year during construction, the new building was a haven for many displaced workers nearby in the immediate aftermath of the fatal tremors. The press praised the development for taking very little damage, with just one window broken. The building has long been the second tallest hotel in the city after 333 O’Farrell Street, though it is soon to be surpassed by the nearly-complete Four Seasons at 706 Mission Street. 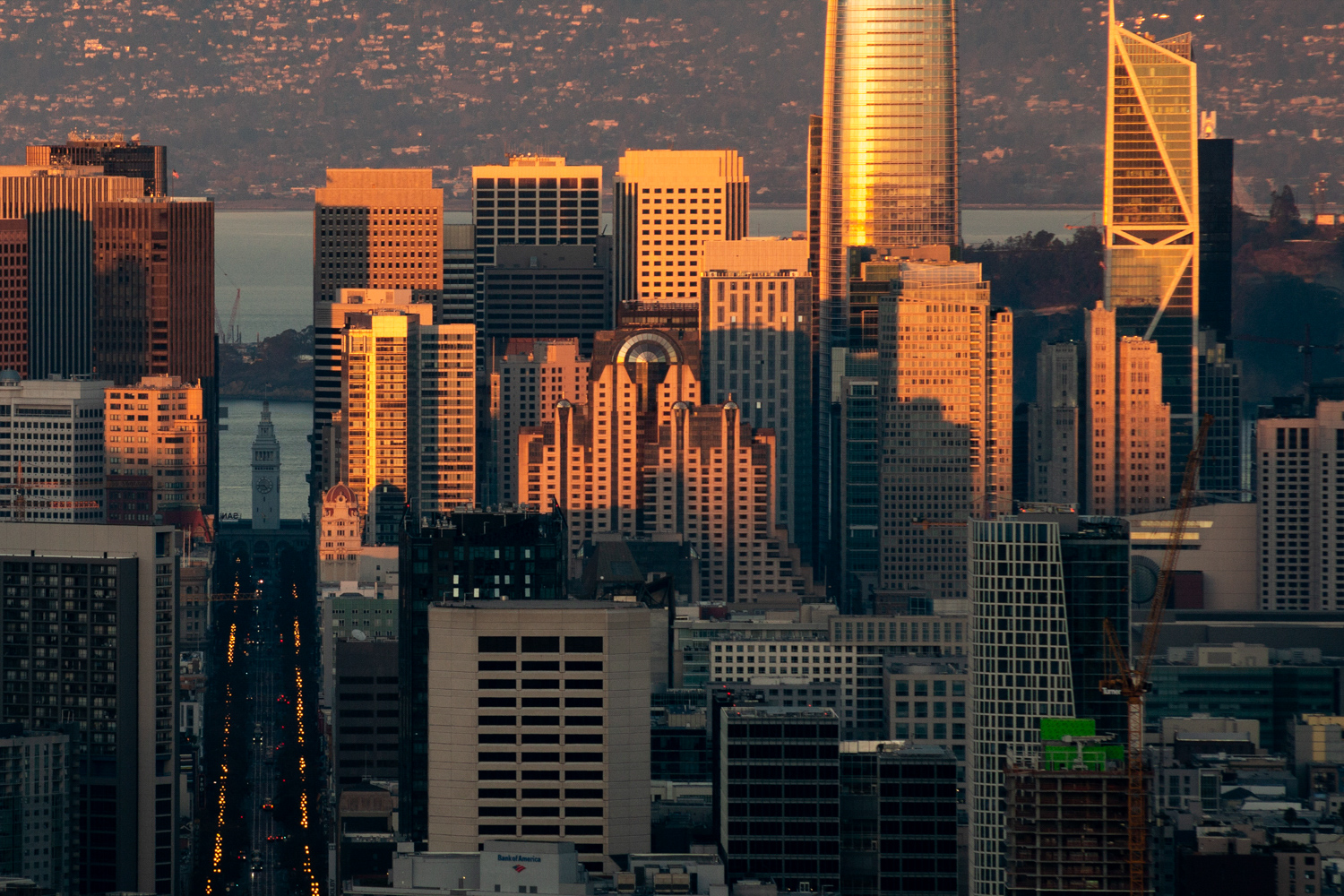 The 39-story hotel was the first of several buildings in the central 24-acre Yerba Buena Gardens redevelopment project. Guests in one of the 1,500 new hotel rooms will benefit from the health club and swimming pool between floors three and four. As well, there is a ballroom, meeting spaces, and a banquet kitchen in an underground location for large events. The structure has two restaurants, a lobby bar, and a cocktail lounge on the second floor for dining. Parking is provided across three basement floors. 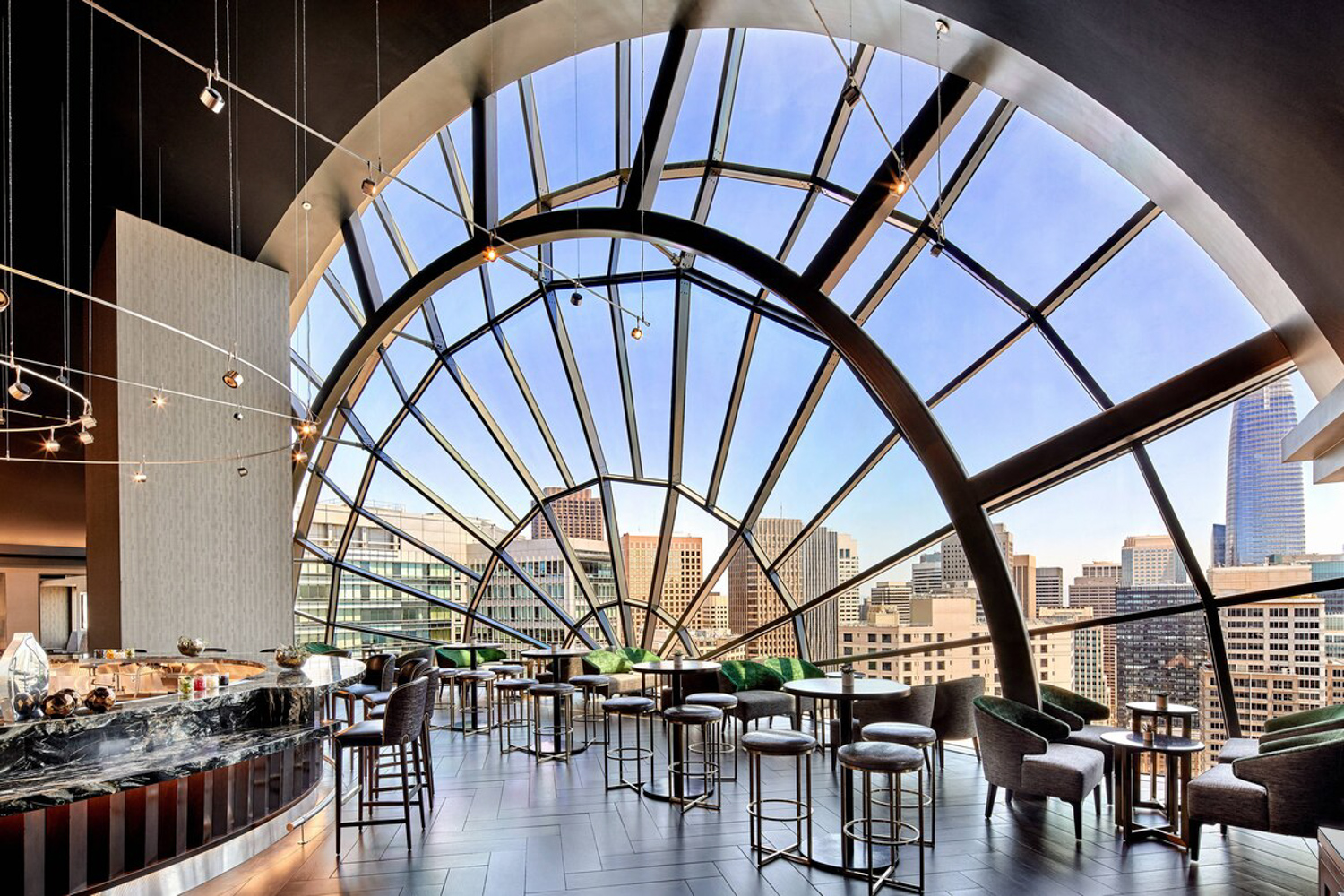 The skyview lounge at the Marriott Marquis at 55 Fourth Street, image via Marriott

There is a popular Skyview lounge on the building’s top level, with a restaurant and bar open to the public. On busy afternoons and evenings, patrons, such as myself, often participate in a game of musical chairs in hopes of scoring the few lucky seats immediately next to the arched windows, with views towards the Central Business District to the east and Twin Peaks to the west. 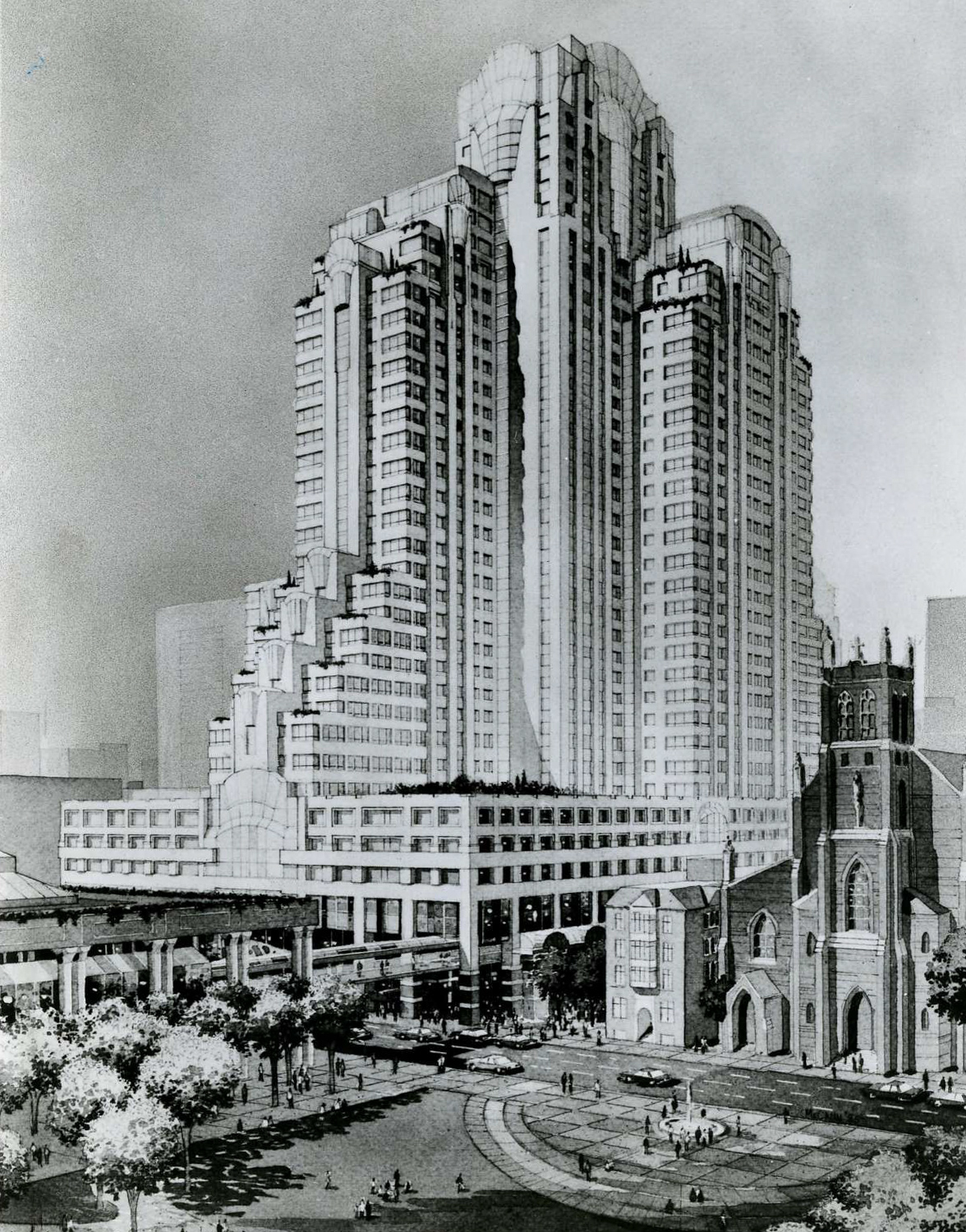 Artist conception of the Marriott Marquis at 55 Fourth Street from 1985, image via the San Francisco Chronicle

The late Anthony J. Lumsden is the design architect. Lumsden was working with Daniell, Mann, Johnson & Mendenhall, i.e., DMJM, which took control of Zeidler Partnership Architects’ project. The Southern California-based architect had a celebrated career working with Eero Saarinen, beside Cesar Pelli, and as the Principal for Design at DMJM for over a quarter-century. His most famous project is the Tillman Water Reclamation Plant, now abutting a Japanese garden in Los Angeles. 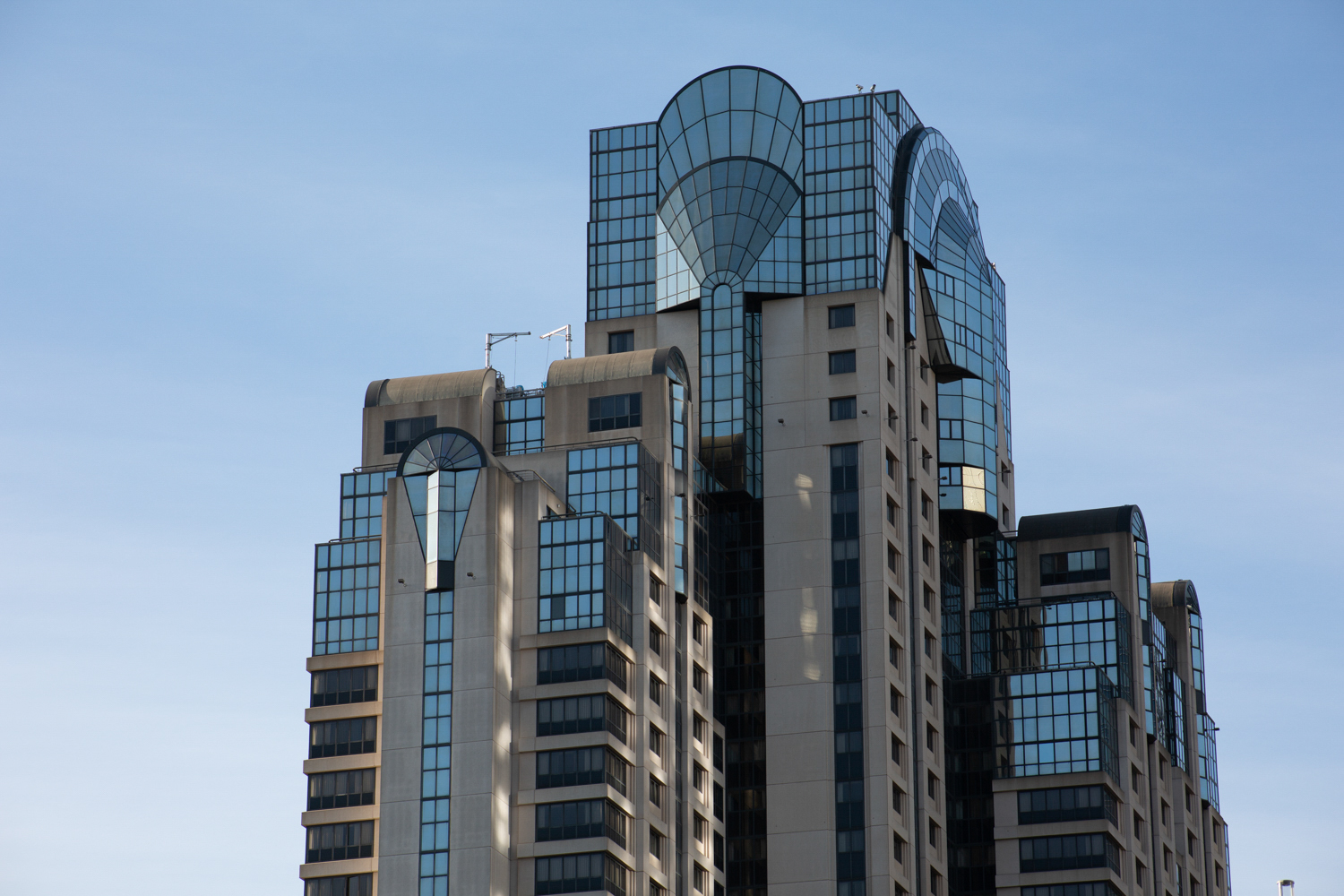 Lumsden’s work on the Marriott Marquis fell to the same criticism most skyline-altering skyscrapers do. It was immediately ridiculed, with many pointing out that the unique windows resemble a jukebox. The book San Francisco Architecture, published by the Chronicle books in 1992, stated that the tower “rivals the Transamerica pyramid as a city emblem and has succeeded it as the building people most love to hate.”

Regardless of how people thought of the tower in the 90s, it has become a defining piece of the urban fabric. Today, sentiments ranging from ambivalent to admiration. The ziggurat step profile and its dramatic arched windows inspired by Art Deco design are symbolic of the postmodernist movement and its rejection of modernism’s aesthetic limitations. The building captures an oddness and bold creativity. Like many buildings from the past, one struggles to imagine if they could pass a design review committee today. 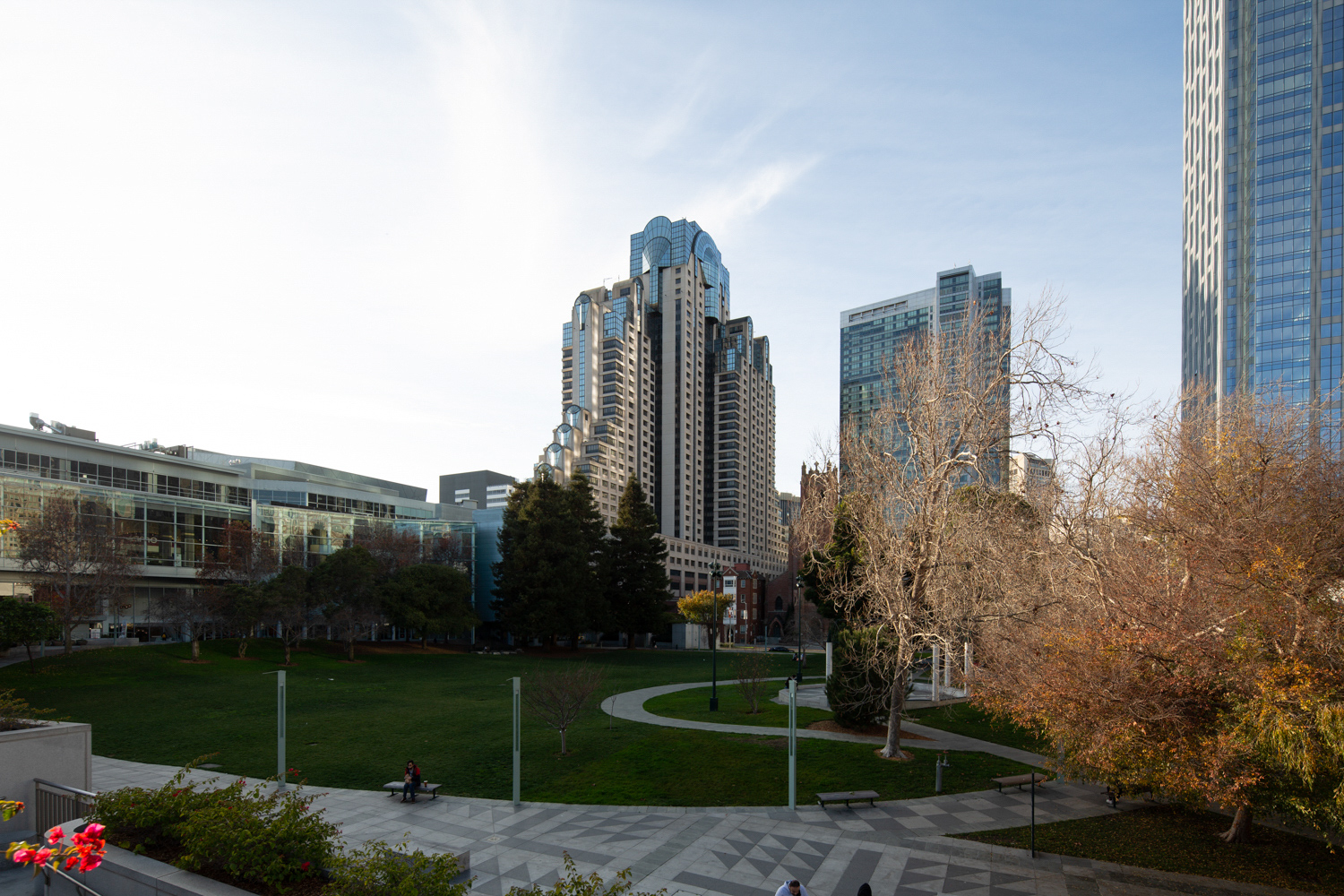 55 Fourth Street from across the Yerba Buena Gardens, image by Andrew Campbell Nelson

The building is not listed as a historic resource by the city’s Planning Department, though it is considered eligible to be in the National Register of Historic Places. Construction cost $126.9 million.