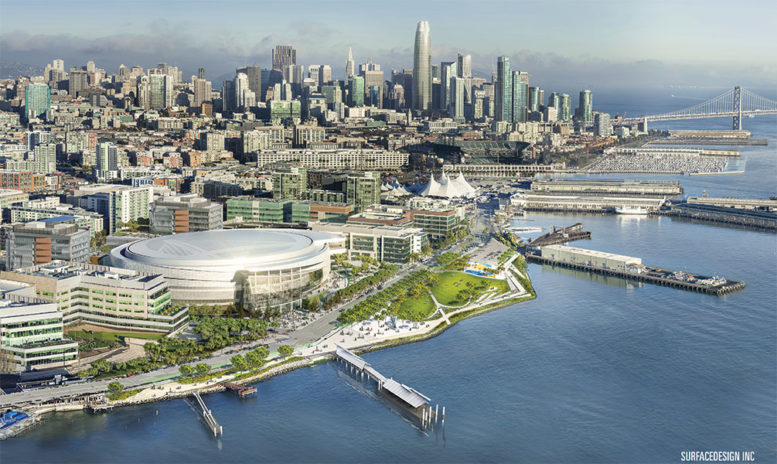 The city of San Francisco and its Mayor, London Breed, celebrated the groundbreaking of Bayfront Park in Mission Bay. The ceremony, held last week, announced the opening of a new park between Chase Center and San Francisco Bay.

The Bayfront Park project is managed by the Office of Community Investment and Infrastructure (OCII) and built by Mission Bay’s master developer, FOCIL-MB LLC.

Mayor Breed, Supervisor Matt Dorsey, the Golden State Warriors and other City and community leaders celebrated the start of construction for Bayfront Park, a planned 5.4-acre open space. When completed in fall 2023, the new park will add a vibrant waterfront destination to the growing Mission Bay neighborhood.

The park is expected to be the waterfront centerpiece of Mission Bay and will include open lawns, a section of the Bay Trail, and multiple plazas. The project will integrate with and improve access to adjacent open spaces: Agua Vista Park and Mariposa Bayfront Park to the south/southwest, and the previously completed portion of Bayfront Park to the north. To help reflect the site’s industrial heritage, the park has been awarded a large quantity of reclaimed steel from the old Bay Bridge to create shade structures and other site furnishings, and to use in other elements of the park.

Bayfront Park was contemplated as part of the Mission Bay South Redevelopment Plan, which was approved in 1998. Since then, Mission Bay has added almost 6,000 housing units, with 1,500 of them affordable. Mission Bay also includes 5.5 million square feet of commercial and retail space to date. Most notably, the new University of California San Francisco hospitals and medical centers, and Chase Center, the home of the NBA Champion Golden State Warriors. Almost 25 acres of new parks and open spaces serve Mission Bay residents and visitors.

Project construction is budgeted at $19.1 million. Bayfront Park is the latest in a series of new waterfront parks in various stages of development all along the San Francisco Waterfront. To the north, Tunnel Tops and Battery Bluffs have both recently opened in the Presidio, along with Francisco Park which opened a few months ago near Ghirardelli Square. South of Bayfront Park, Crane Cove Park recently opened, and new parks and open space are being developed, including India Basin Shoreline Park, a future 10-acre open space on the Southeastern Waterfront.