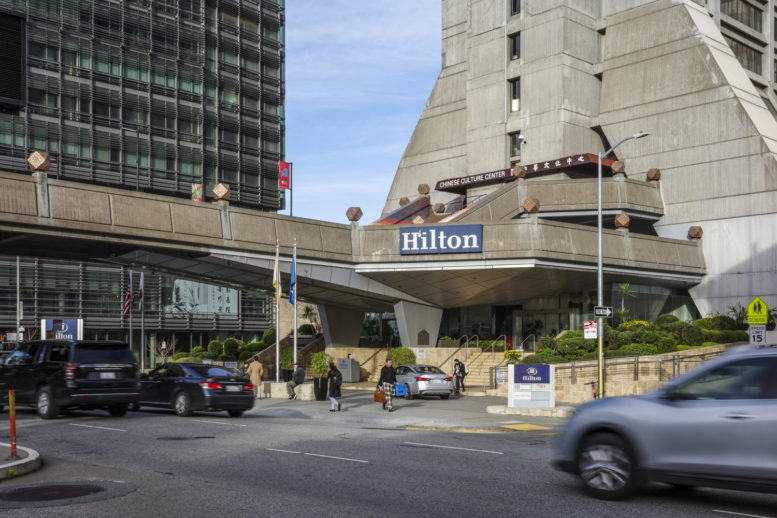 New illustrations have been revealed and permits filed for the redesigned porte-cochère entrance for the Hilton hotel at 750 Kearny Street, located on the border of Chinatown and the Financial District in San Francisco. The exterior will be renovated once crews remove the Kearny Street pedestrian bridge. Demolition is expected to start later this year with the start of the $66 million Portsmouth Square improvement project. 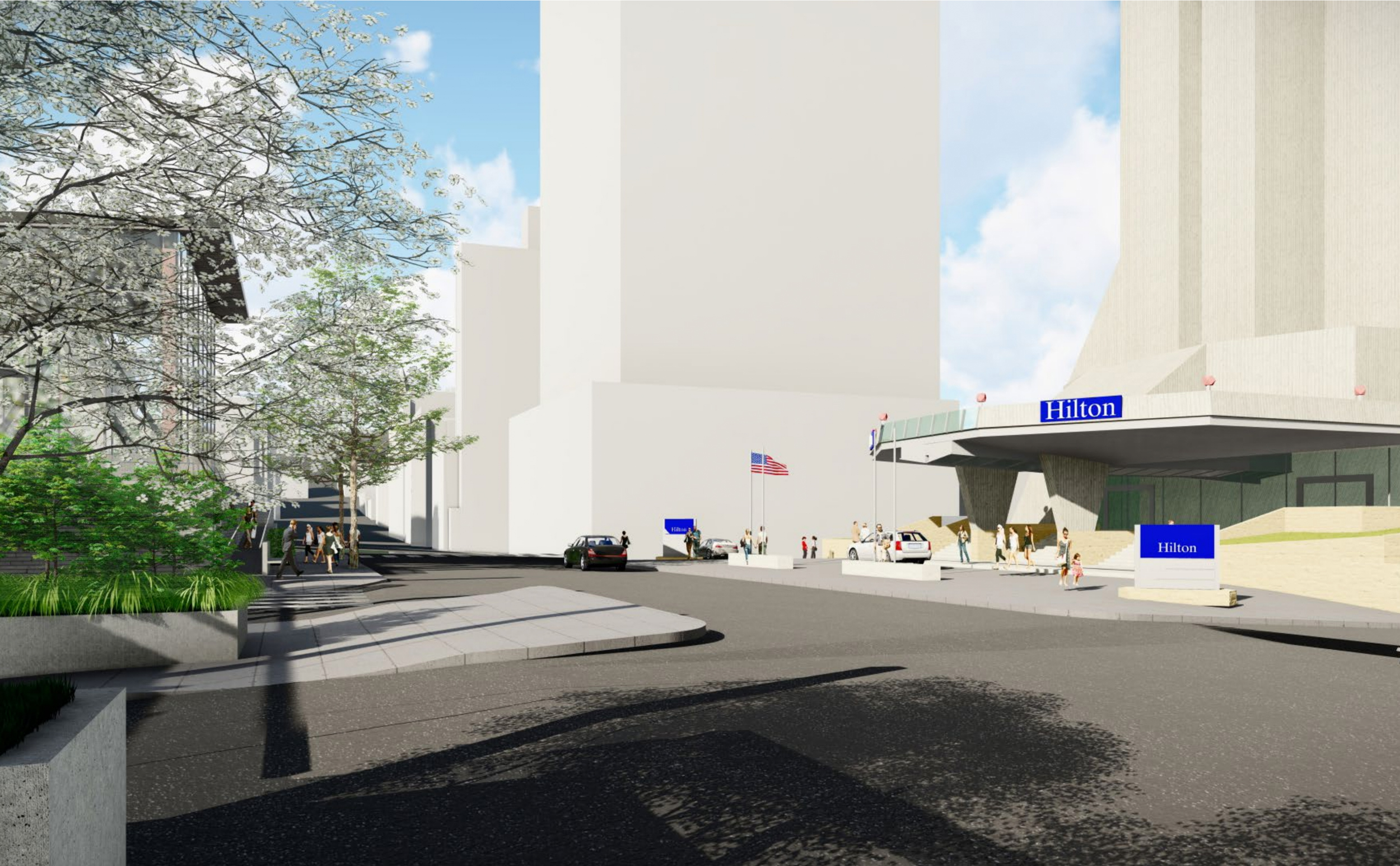 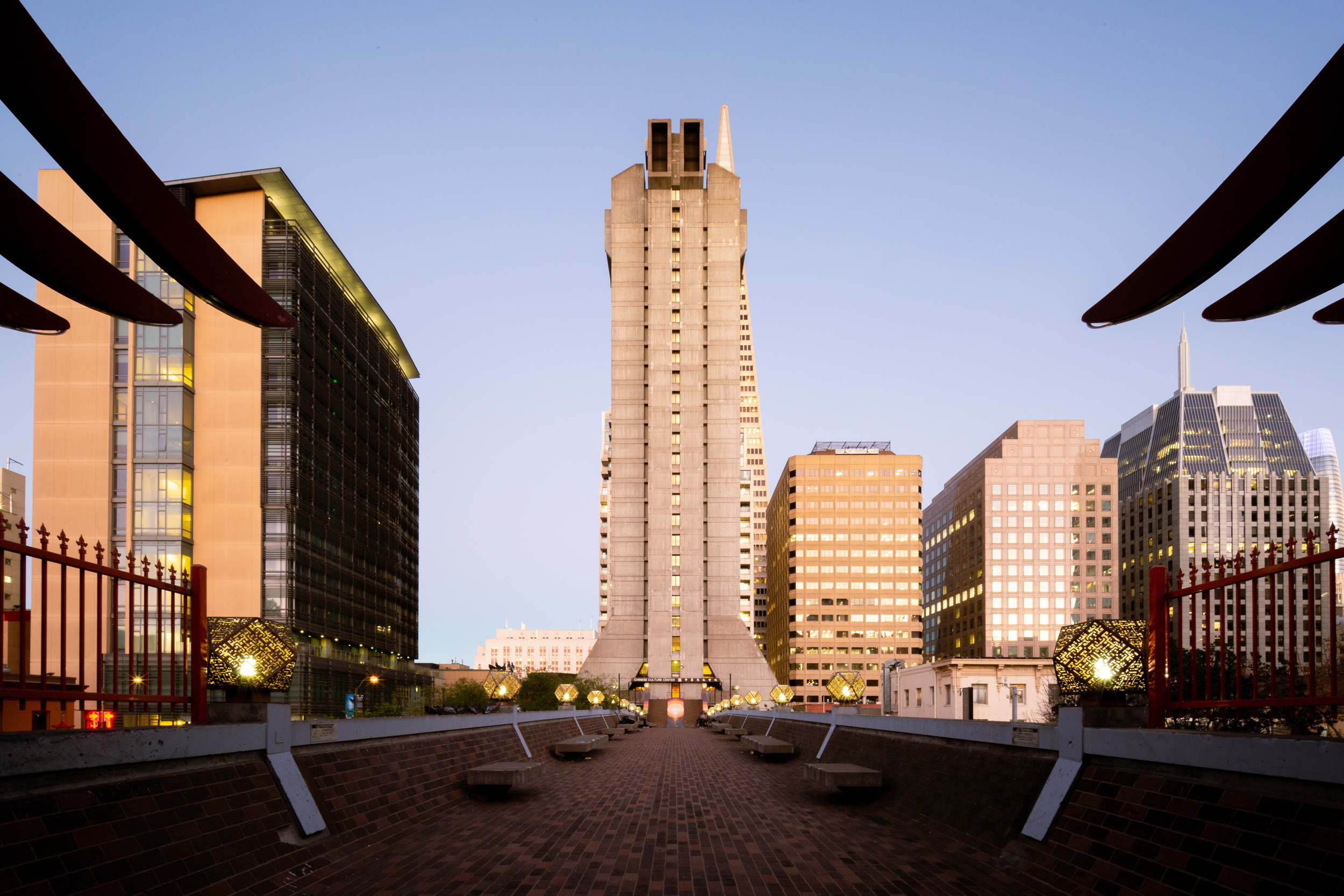 The second and third floors of the hotel includes the roughly 20,000-square-foot Chinese Cultural Center, which opened in 1973. The pedestrian bridge connecting the center with Portsmouth Square was designed to be accessible for the neighborhood. While the bridge has been identified as eligible for listing in the California Register for its association with significant events and architectural significance, public sentiment remains adamant. Its removal will likely be celebrated as demolishing a little-used eye sore. 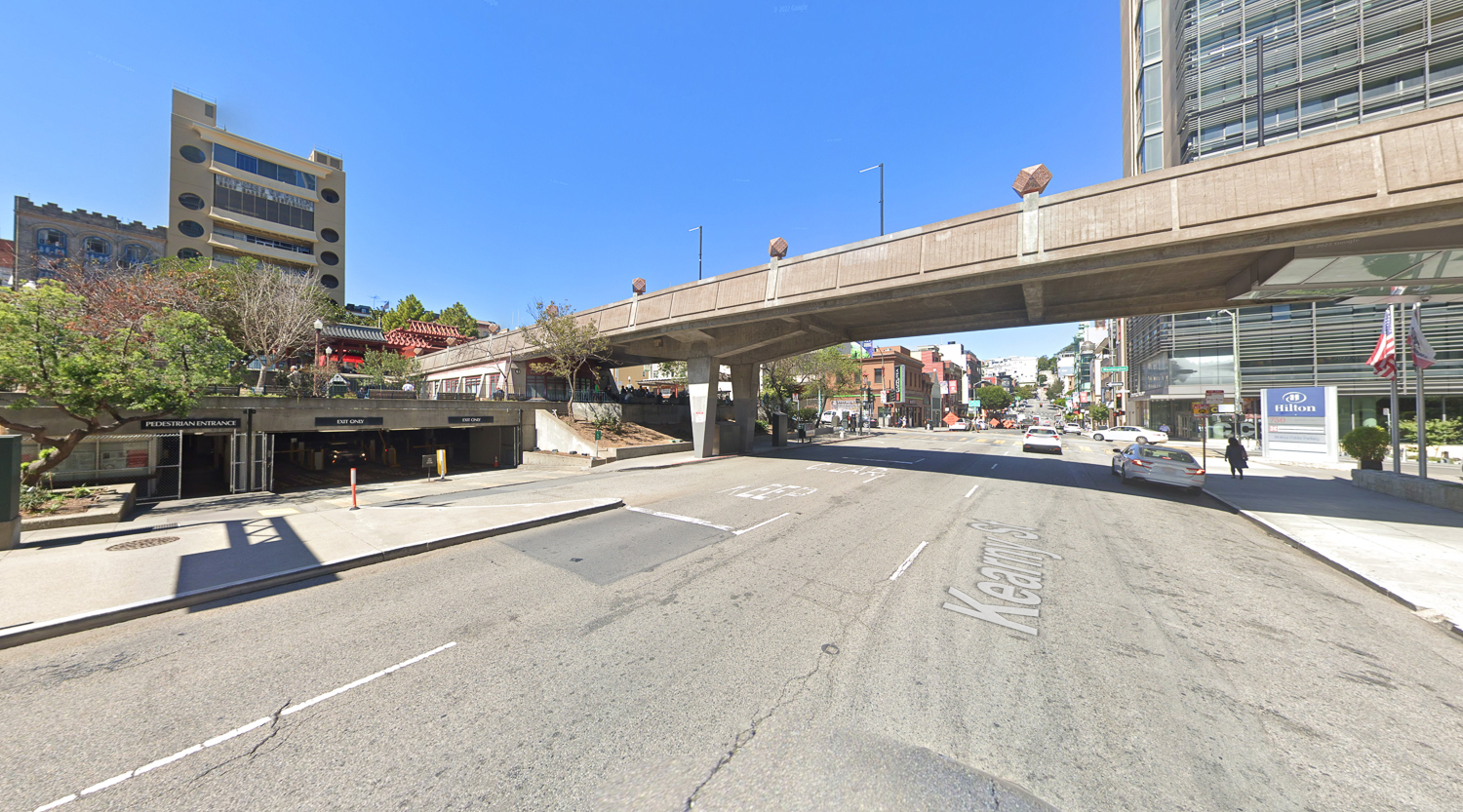 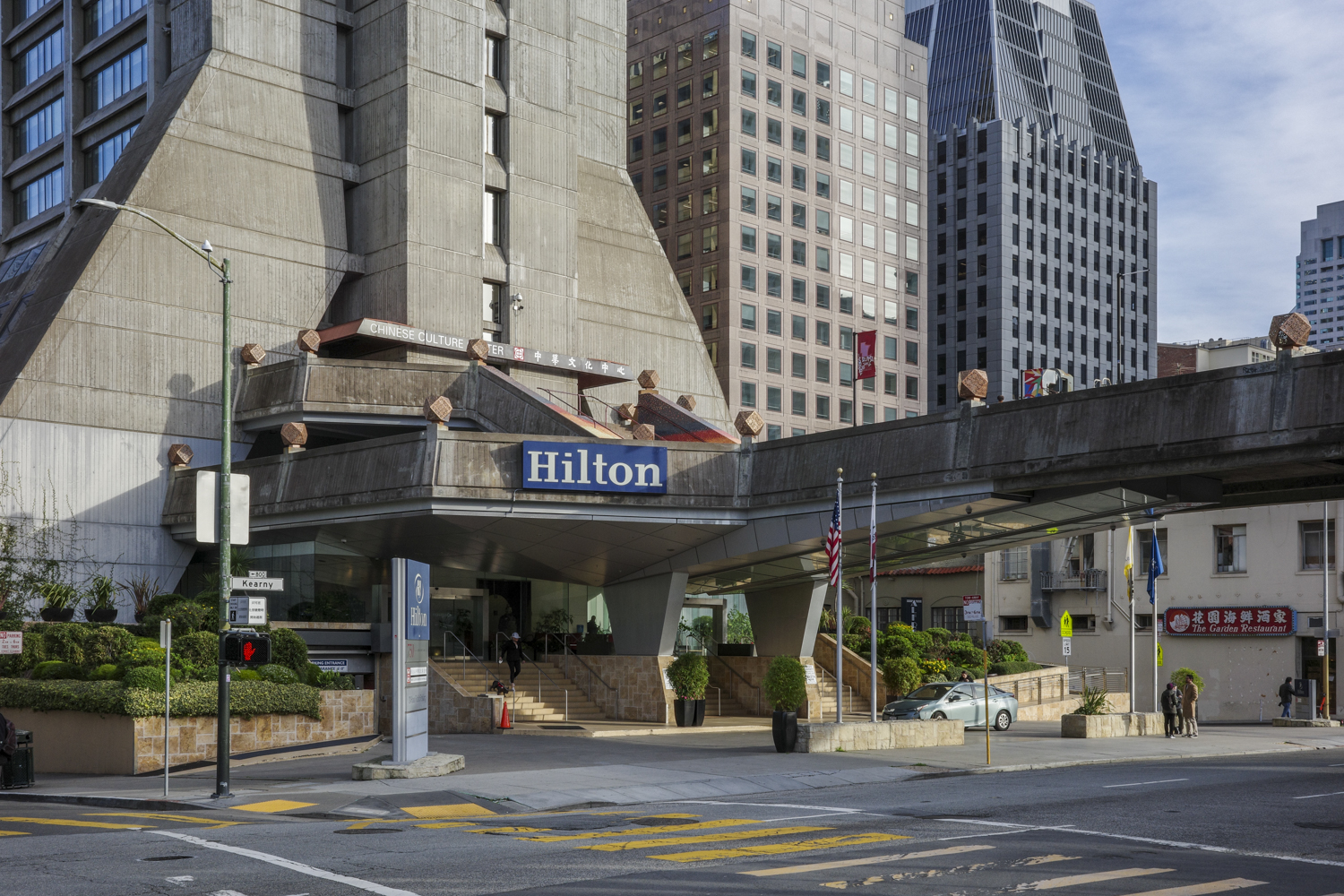 The bridge is 28 feet wide and 210 feet long, built with reinforced concrete supported by cross beams and a pair of bents on opposing sides of Kearny Street. The following passage comes from the historic resource review in the Portsmouth Square Draft Environmental Impact Report, page 2-10:

“The pedestrian bridge was built in 1971, concurrent with construction of the hotel building and designed in collaboration by architect Clement Chen and Chen Chi-kwan, an architect from Taiwan. At the time of his selection, Chen Chi-kwan was internationally recognized for his contribution to architecture, having previously studied under Walter Gropius at Harvard, taught at the Massachusetts Institute of Technology, and collaborated with I. M. Pei.”

The new hotel port-cochére, as illustrated in the Draft EIR, retains a portion of the bridge as a terrace overlooking Kearny Street, with six of the distinct cuboctahedron light fixtures along the railing. The new permits filed have also suggested analyzing the addition of two egress staircases on the exterior of 750 Kearny Street, which will involve an EIR Addendum. 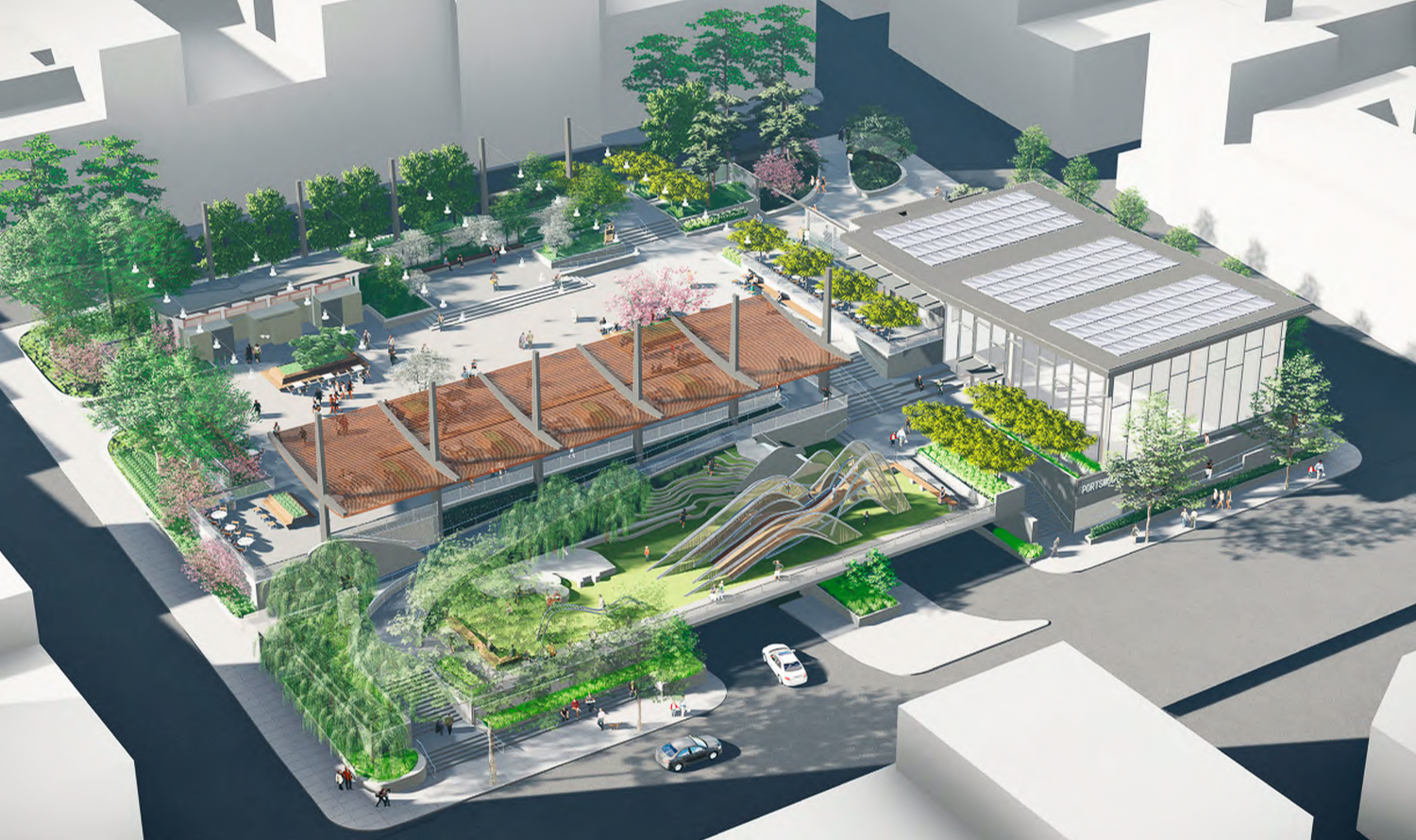 A representative for the city’s Recreation and Parks Department told the Chronicle last year that construction on Portsmouth Square is expected to start by late 2023. Staging and equipment movement is expected to last two months, followed by the demolition of the pedestrian bridge and removal of existing recreational and landscaping features. For more information about the Portsmouth Square renovations, see our previous reporting here.