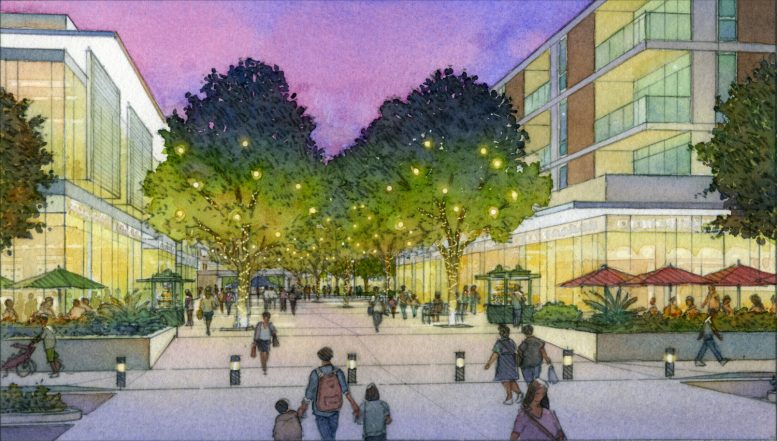 The East Bay Times has reported that the San Ramon City Council unanimously approved the CityWalk development for Bishop Ranch. The project has the potential to be a catalyst for a new direction in suburban San Ramon. Thanks to city approval, Sunset Development Company is set to build 4,500 new apartment units and a mixed-use neighborhood that encourages foot traffic, bicycle use, and public transit. Most impressively, no residential neighborhoods were displaced. The adaptive reuse of parking land will transform one percent of the city’s area to house ten percent of its population. 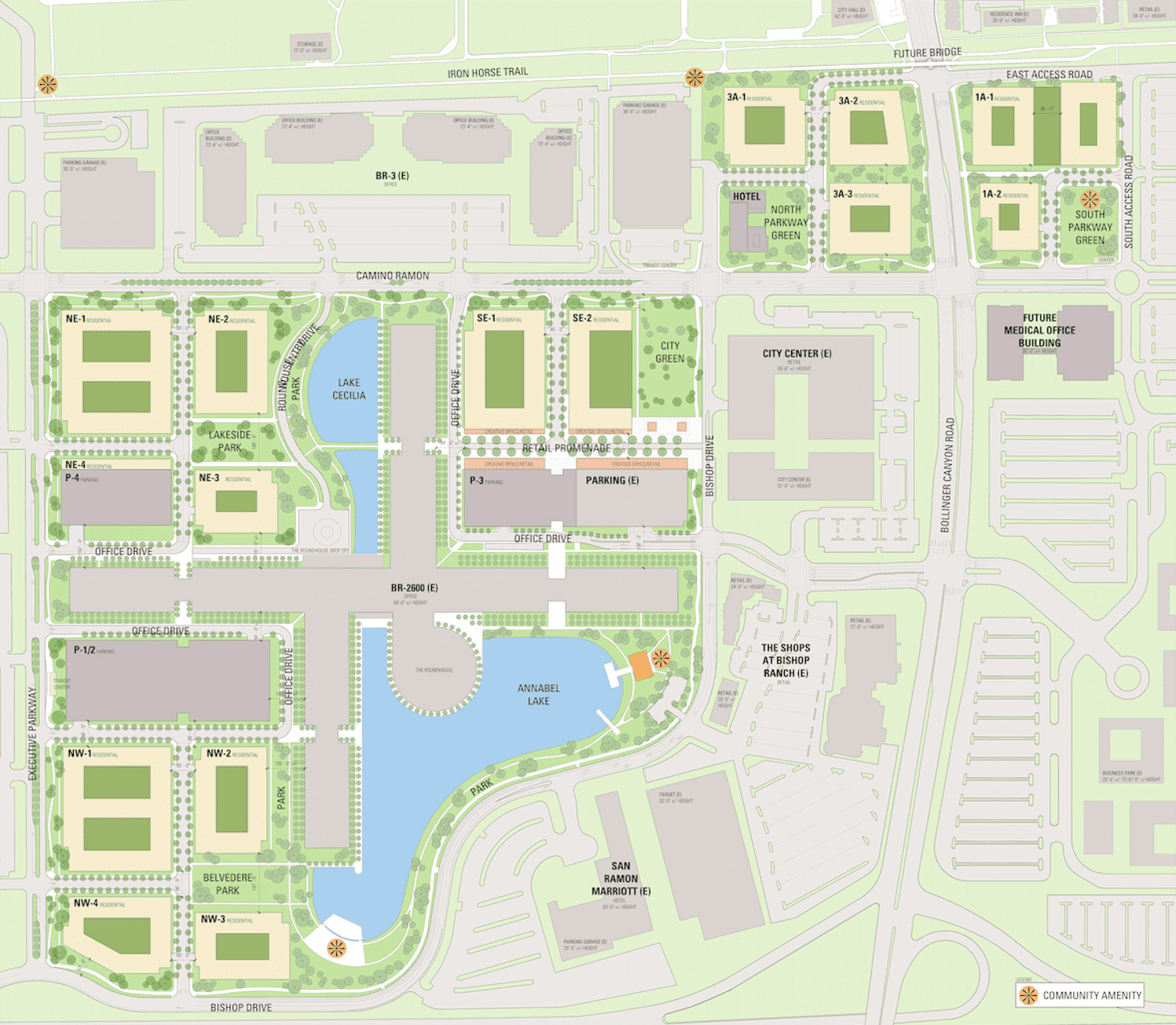 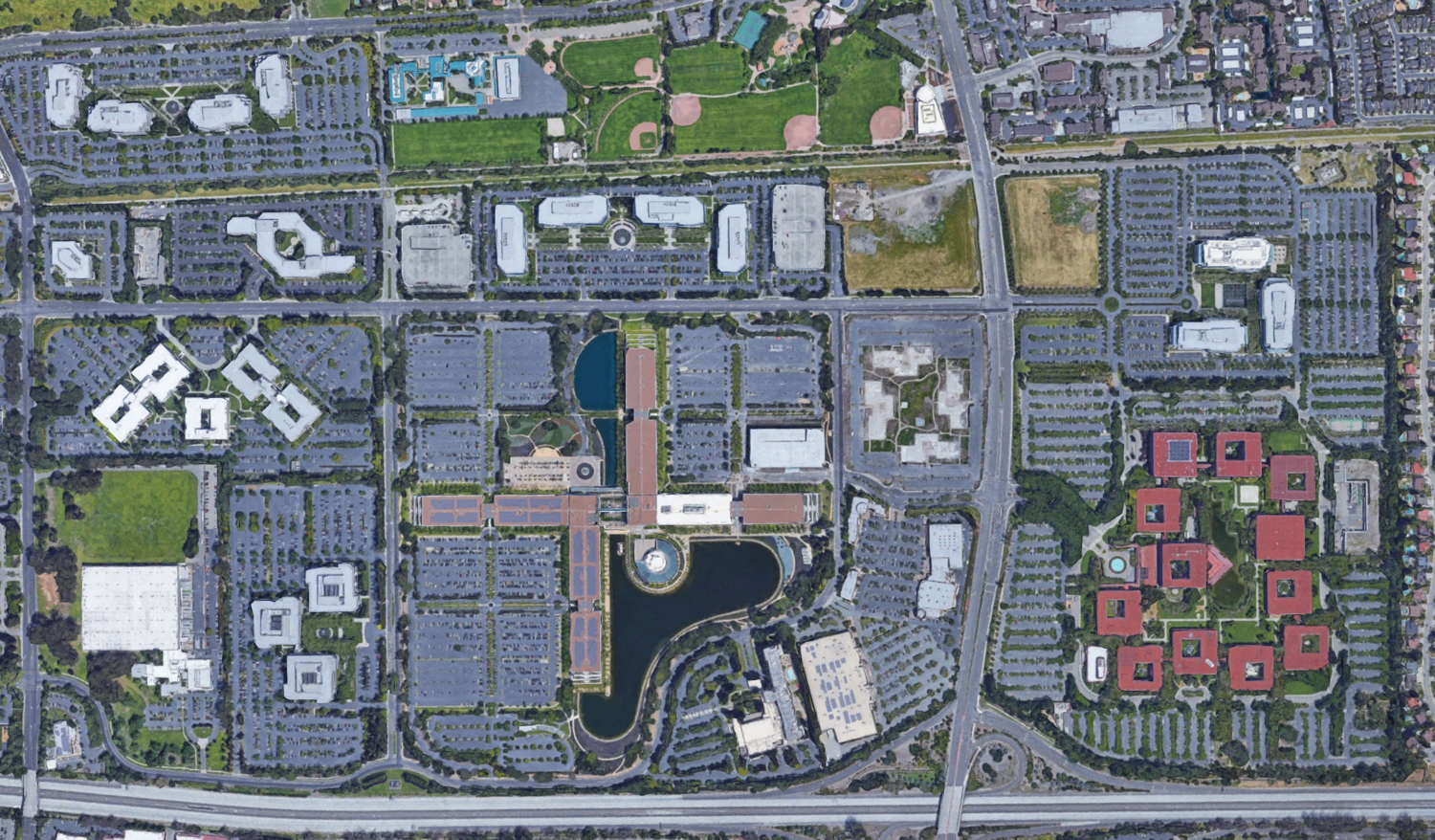 Sunset Development Company is in charge of the project. The family-led firm started in Livermore in 1951 and established Bishop Ranch in 1978.

CityWalk’s master plan proposes to add just half the population of Windemere using 17 times less space, 135 acres compared to 2,300 acres. 675 out of the 4,500 units will be affordable for low and very-low-income residents. 5% of all units will be studios, 45% will be one-bedroom, 43% will contain two bedrooms, and 7% will have three bedrooms.

Beyond housing, the new developments include a diversity of mixed uses. This included 169 hotel rooms, 170,000 square feet retail space, 166,000 square feet commercial space. The new streets will be shaded by trees, helping encourage pedestrian use. One of the central destinations for residents could very well be the City Center, Bishop Ranch. This is a 300,000 square foot retail hub designed by the acclaimed Renzo Piano Building Workshop in collaboration with BAR ARchitects, and opened in 2018. Construction will bring 166,000 square feet of new commercial space, as well as 170,000 square feet of new retail. Residential areas will have roads set back and lined with shaded by trees to promote walking through the district.

Many of the development’s green amenities will be open to the public, as most urban parks are. Also planned for the public, a redesigned Annabel lake, an extension to the Iron Horse Trail, and a 1,500-seat amphitheater.

Like most other towns across the Bay Area, high demand for housing in San Ramon has pushed average home values sky-high, up to $1.29 million according to Zillow. However, the city is no stranger to large development. The Windemere suburban project increased the city’s population by over 30% between 2009 and 2010. Following that, the town expanded its road network to handle increased congestion and has left concerns that remain to this day.

The recent suburban expansion in San Ramon has made residents wary about the risk that new housing has on adding to congestion. The developers are planning to mitigate potential congestion by making public transit and bicycle use a viable option for residents. The planned public transit hubs will connect future residents with existing mass-transit.

The East Bay Times quoted the city mayor Bill Clarkson during the council meeting as saying, “if this project helps to reinforce San Ramon having great jobs and being a magnet for companies of good-paying jobs, it will maintain the quality of life in San Ramon.”

Sunset Development Company is planning to begin construction by next year, with the first buildings done as early as 2023. The district will be expanded piece by piece to provide the opportunity to engage with community dynamics.

Be the first to comment on "CityWalk Master Plan Approved for Bishop Ranch by City Council, San Ramon"