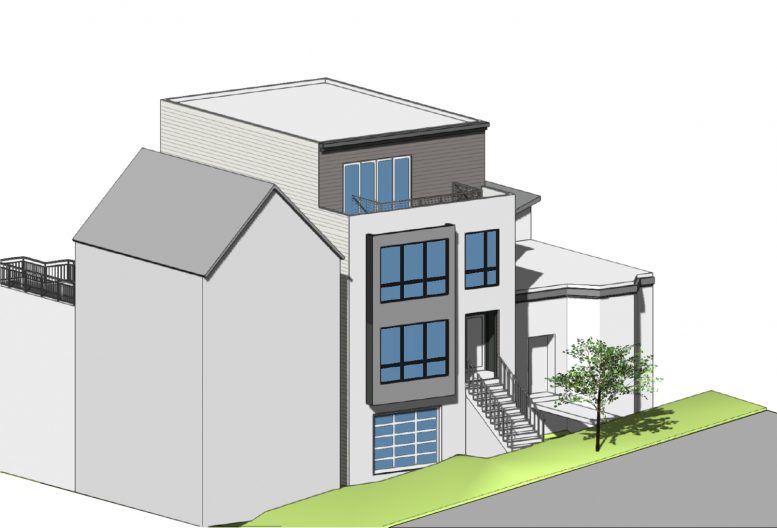 New building permits have been filed for a four-story residential building at 611 Rhode Island Street, on Potrero Hill, San Francisco. The 37-foot structure would yield 4,120 square feet, of which 3,515 square feet is for residential use. BMW Properties LLC, unrelated to the German manufacturing company, is listed as the property owner.

SIA Consulting filed the application for the proposal. The firm specializes in helping established developers and first-time homeowners to navigate the process of approval and construction. Draft illustrations reveal the proposed structure for 611 Rhode Island will not stand out significantly along with the street profile. A stoop brings residents from the street to the second level. The front facade is also donning a new bay window for continuity of San Francisco’s architectural vernacular. The fourth level will be set back six and a half feet to lower the building profile and allow for a private balcony.

Both units have three beds and three baths, outdoor balcony areas, and outdoor balconies. Unit one, on floors one and two, will be slightly smaller than unit two. The lower level will have 1,700 square feet versus 1,800 square feet. However, this may be considered made up, given its access to the two-car two-bicycle garage.

Permits have also been filed for the demolition of the existing two-story single-family building. An estimated completion date has not been announced, though construction is expected to cost developers $850,000. The property last sold on March 20th of this year for $1.3 million. The city assesses the existing site’s value to be just $36,000.

Be the first to comment on "Permits Filed for 611 Rhode Island Street, Potrero Hill, San Francisco"