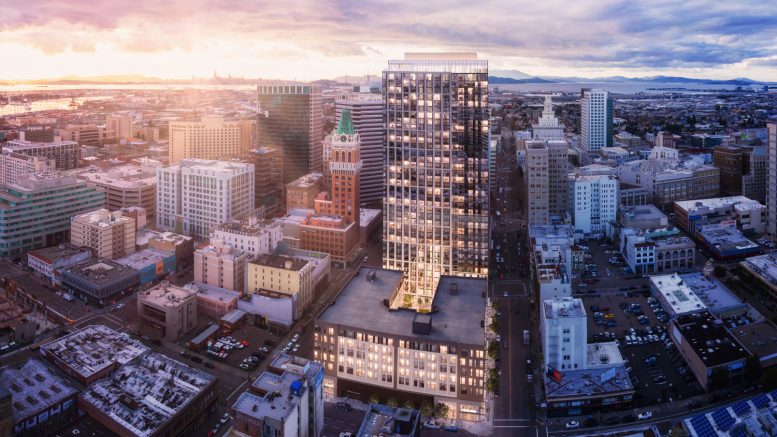 The Atlas at 385 14th Street, architecture by SCB

The tallest residential tower in Downtown Oakland has passed the 50-percent leased milestone. Atlas is a recently-opened 40-story mixed-use tower with 633 rental units rising at 385 14th Street in the heart of the city, just a block from the 12th Street BART station. Carmel Partners is the developer with Greystar managing leasing. 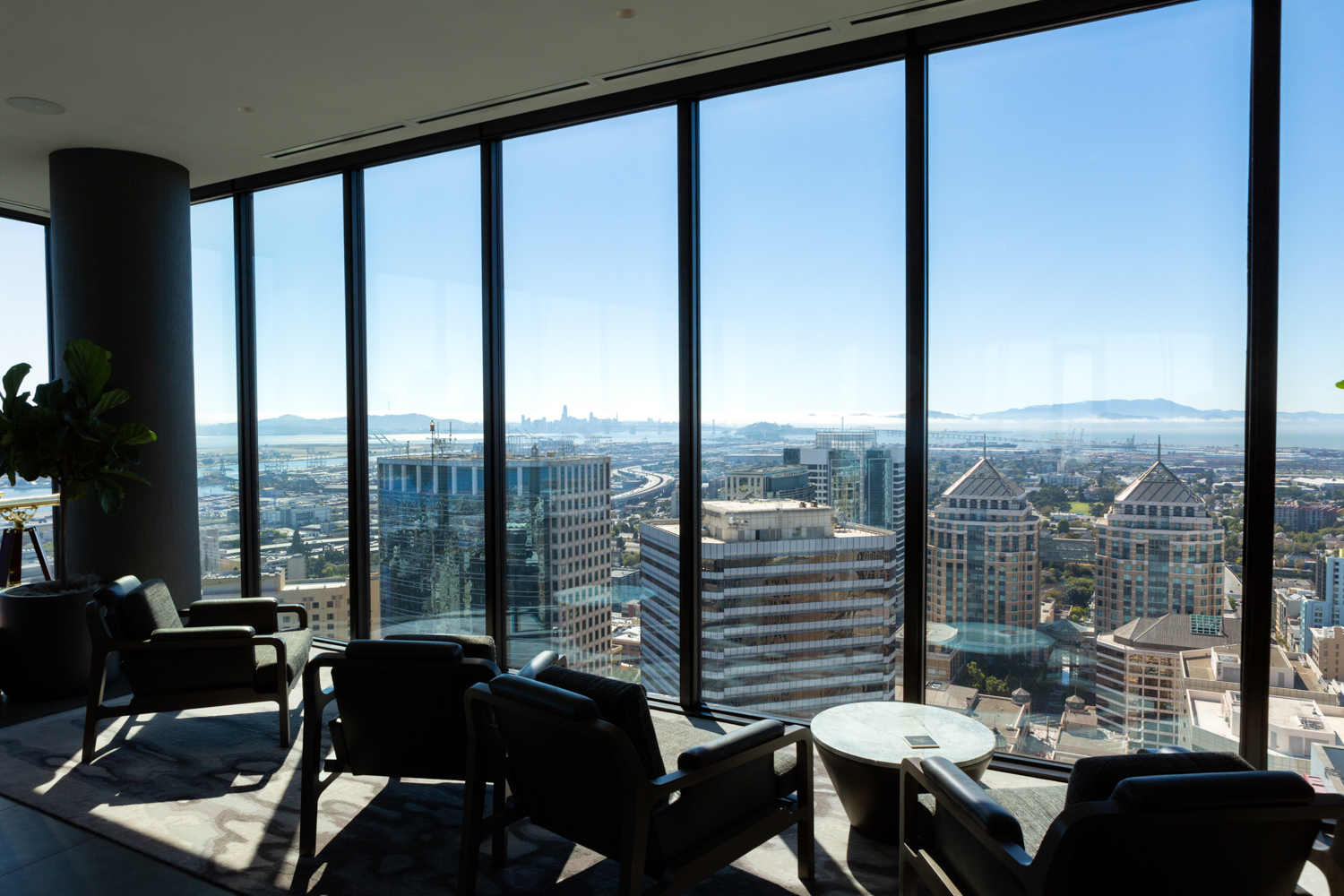 Sunset Lounge in the Atlas at 385 14th Street, image by Andrew Campbell Nelson 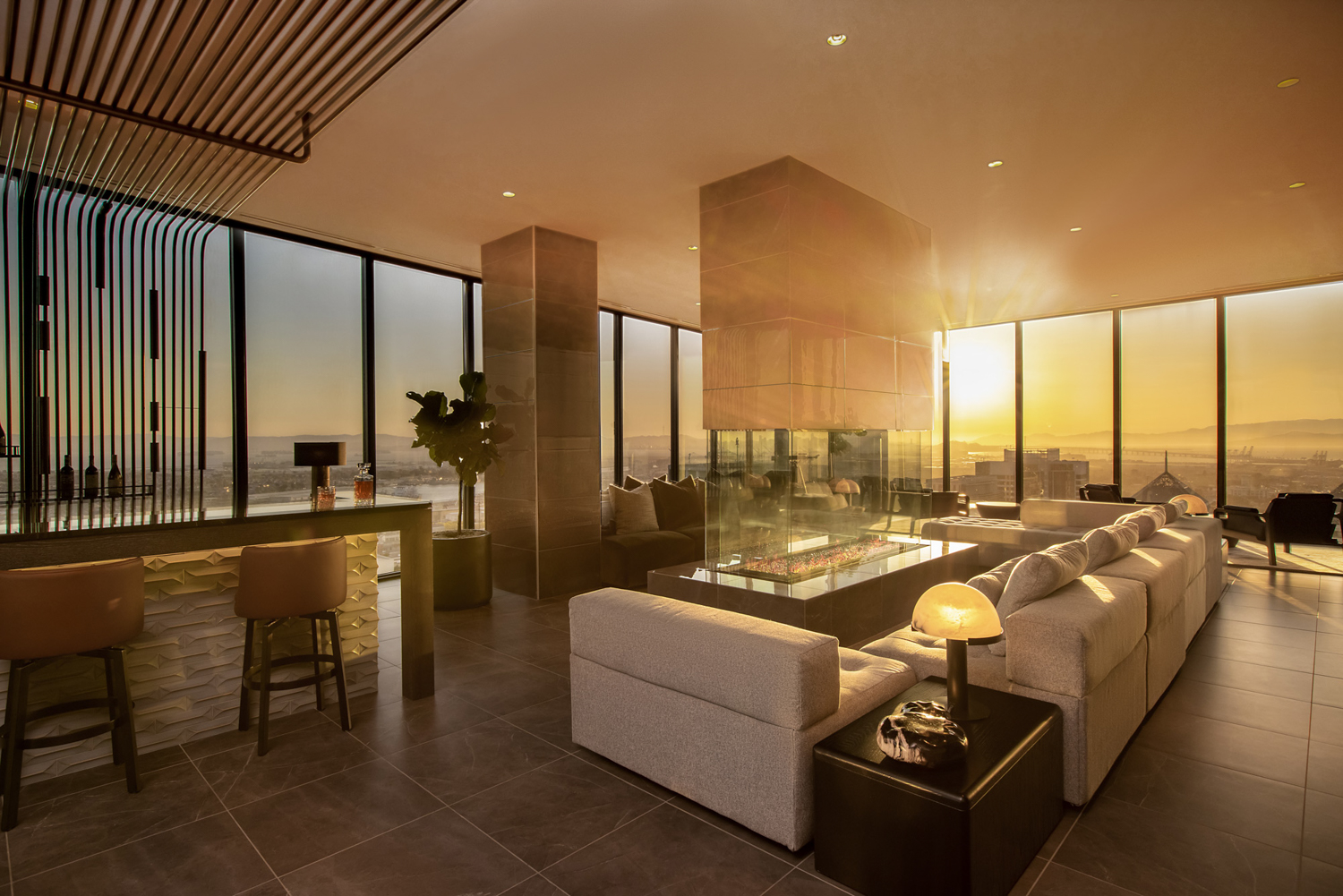 Sunset Lounge during golden hour in the Atlas at 385 14th Street, architecture by SCB 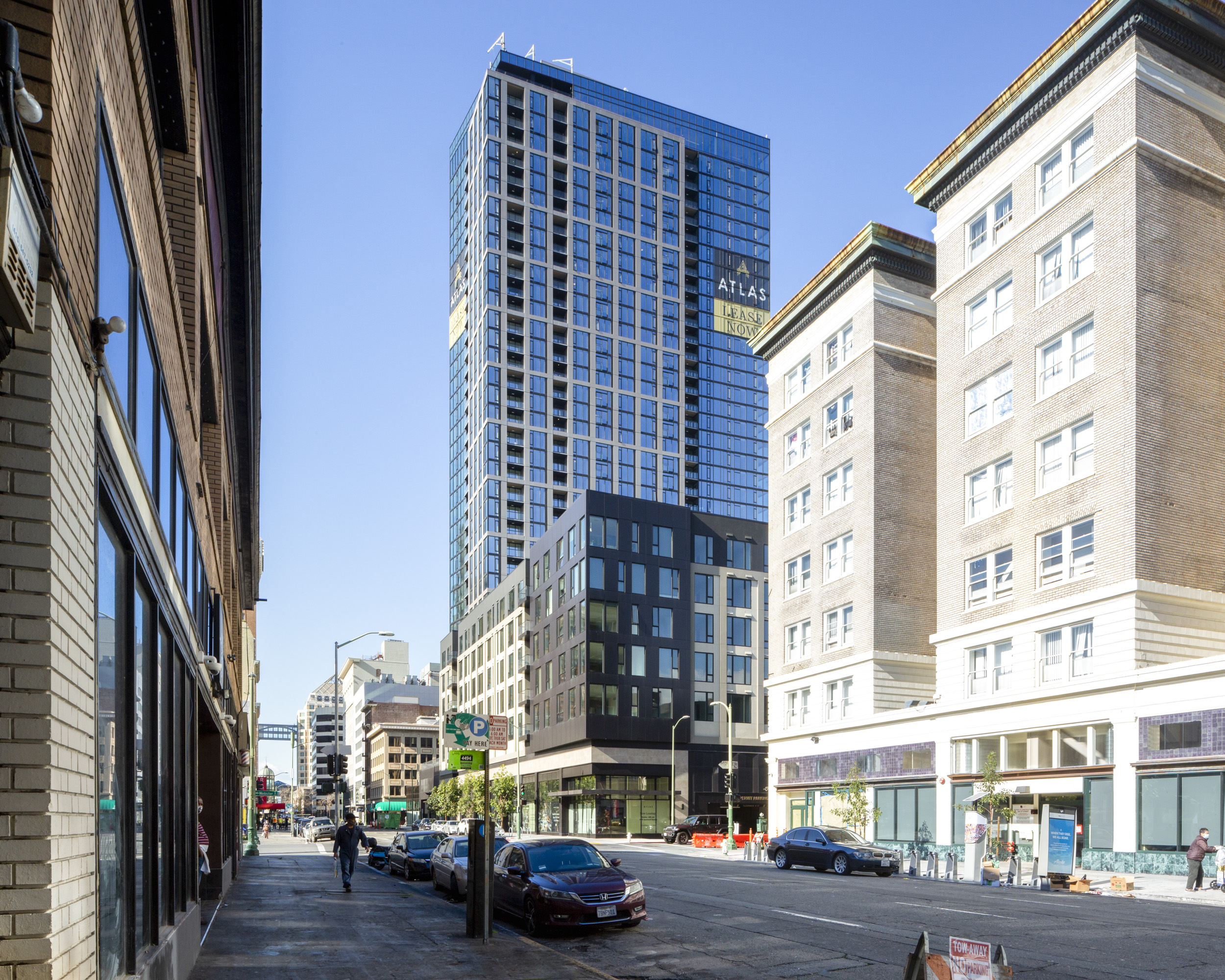 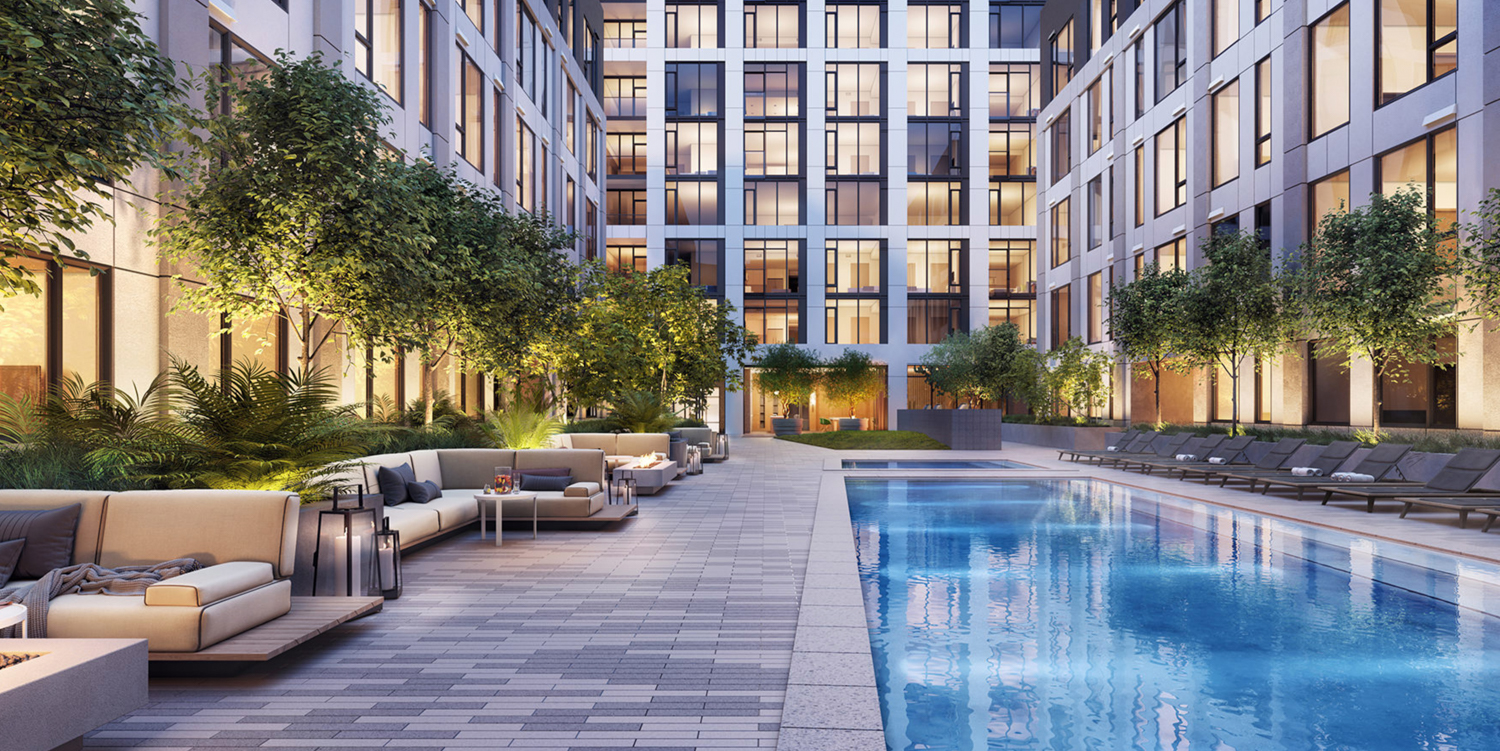 Just one year after opening, the project is now over half leased. During our visit, it was clear that new residents were making good use of the amenities. These offerings center around the 13,000 square foot inner-block terrace, nestled between the podium and tower buildings. Swimmers were enjoying the pool. The co-working lounge was quietly buzzing with the pitter-patter of laptop keyboards. 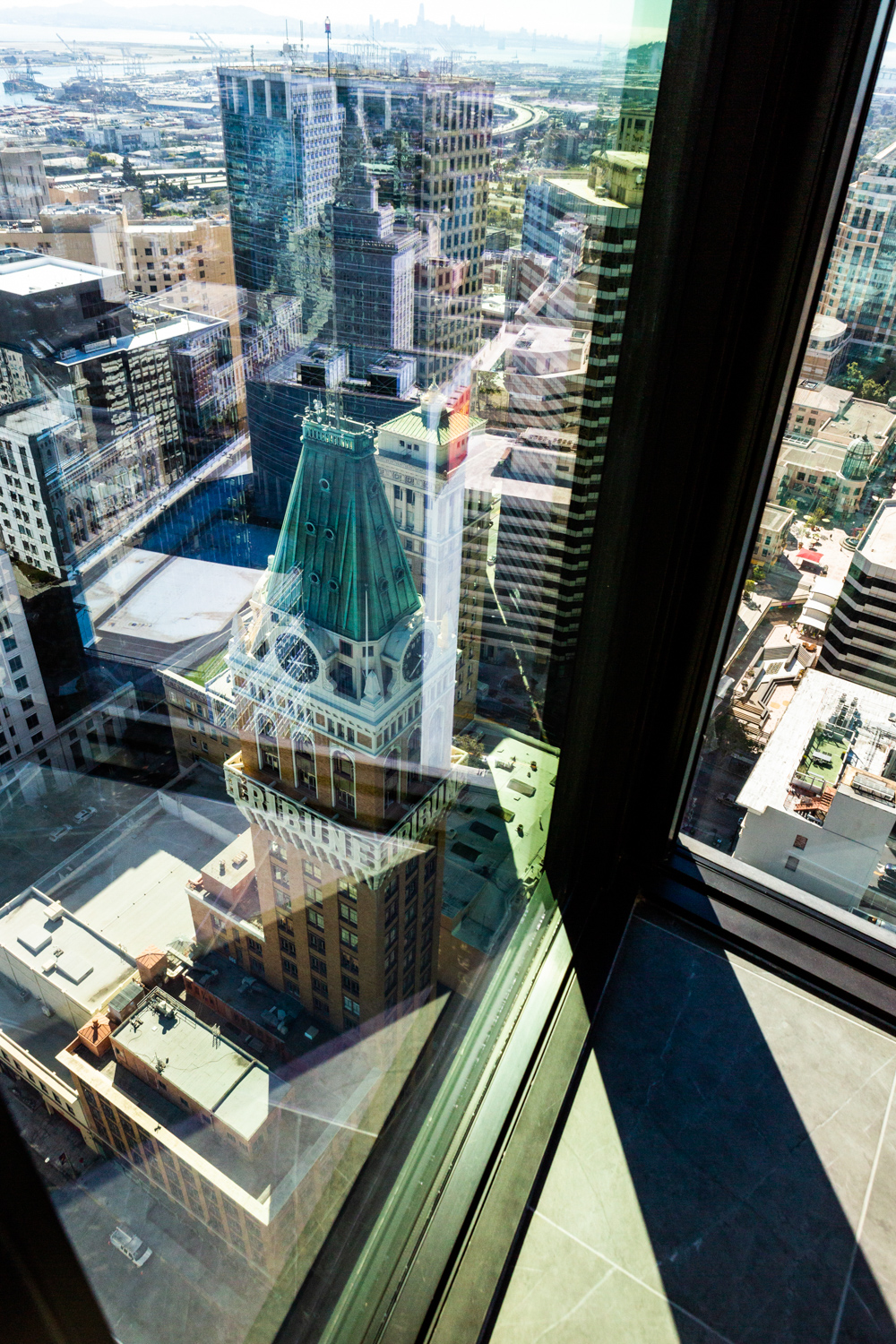 Further amenities can be found at the top of the tower, including an expansive lounge and open-air deck. Residents working out in the 4,000 square foot fitness center were accompanied by a panoramic view from San Francisco and Berkeley to Lake Merritt. Just about the only amenity space that was not occupied during our mid-afternoon visit was the multi-room private dining space illuminated by a curtainwall window facing the Bay. 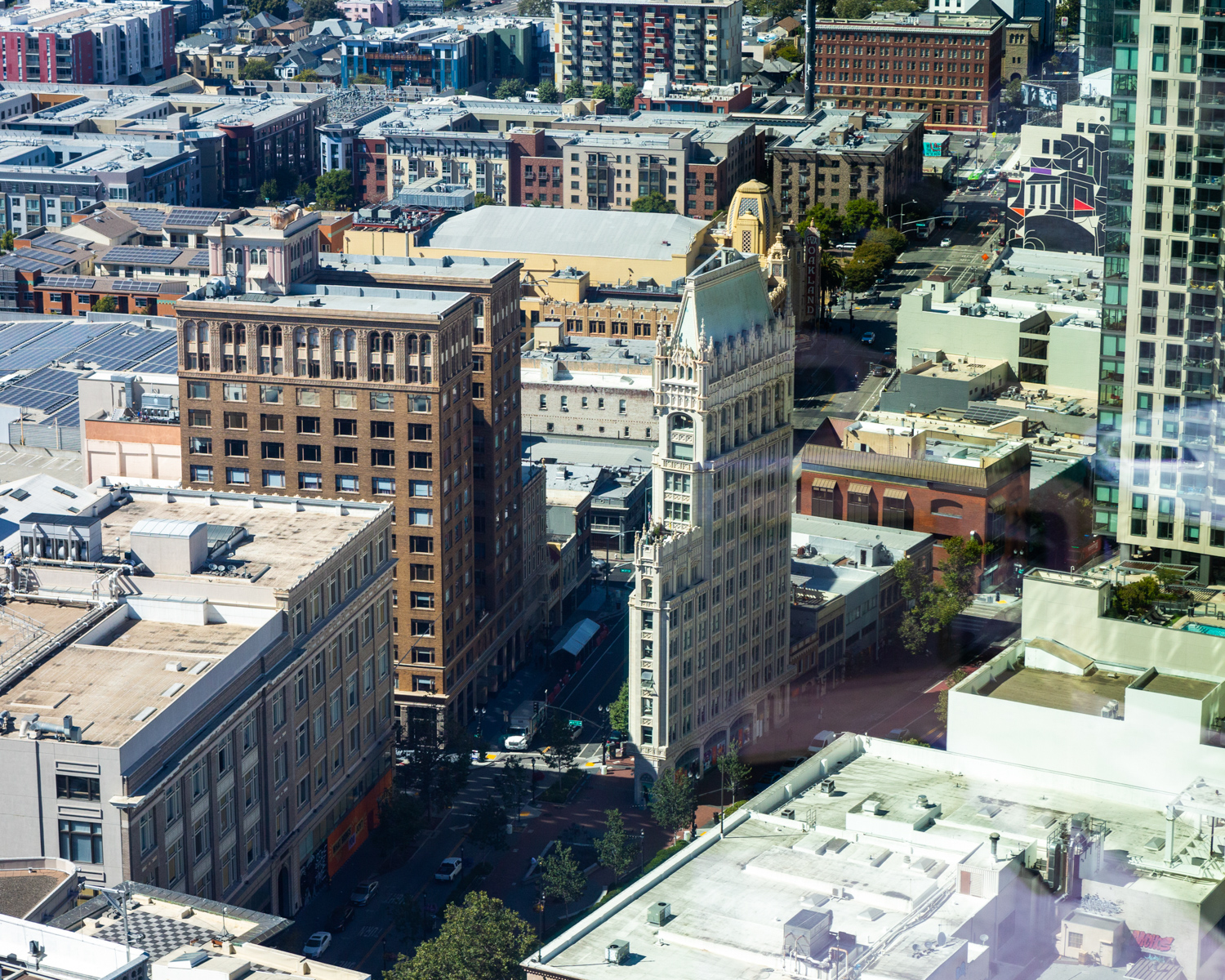 The Cathedral Building at 1615 Broadway in Downtown Oakland, seen from the Atlas at 385 14th Street, image by Andrew Campbell Nelson

Other entertainment amenities include the fire pits, outdoor barbeque, pizza oven, game room, and media lounge. Pet owners also benefit from the on-site dog run. Service amenities offered for residents include home cleaning, laundry, and move-in assistance. For the penthouse residents, their units will receive complimentary bi-weekly home cleanings and invitations to monthly happy hour at the Sunset Lounge and weekly brunch in the private lounge. 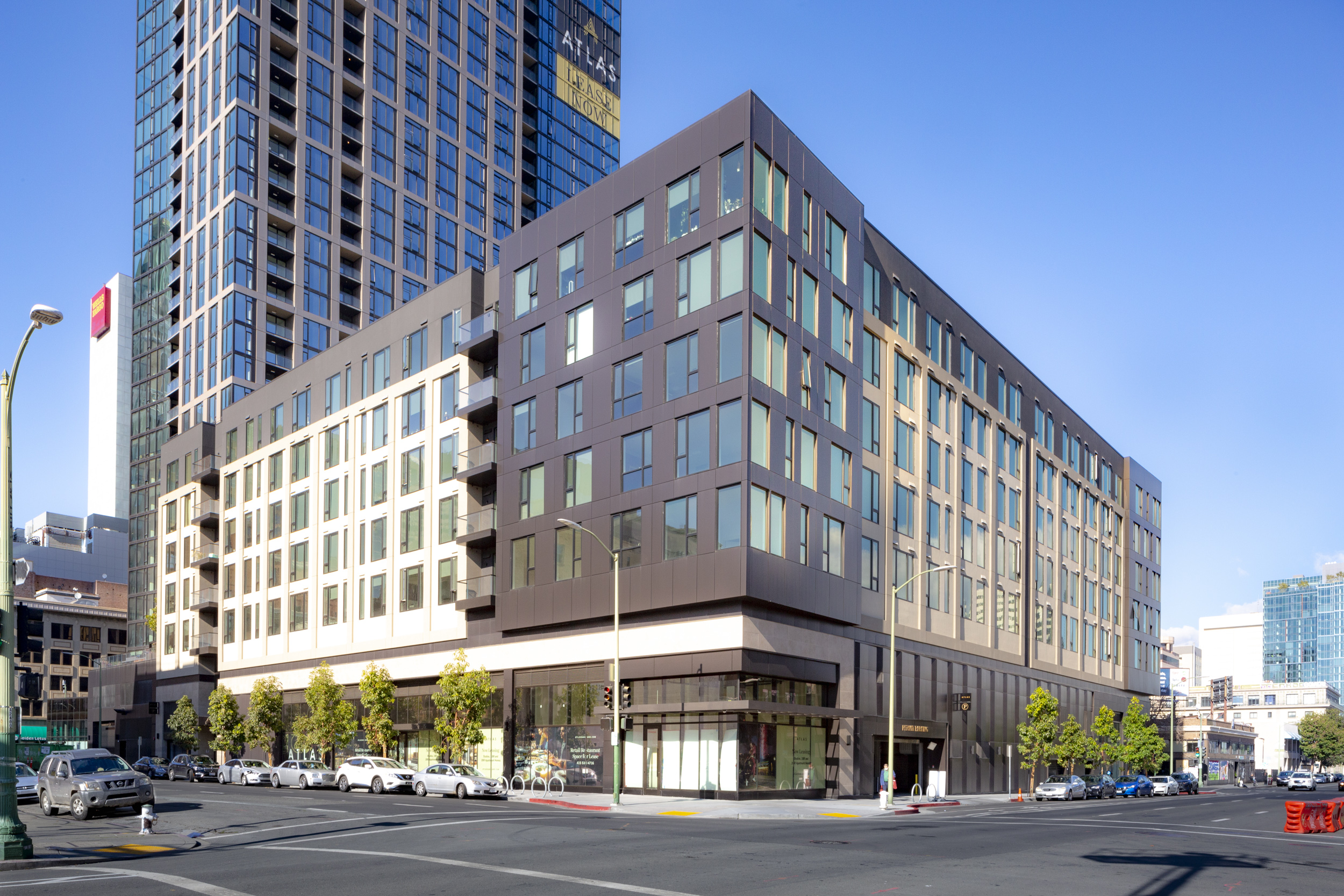 Solomon Cordwell Buenz, or SCB, is responsible for the design. The studio has been responsible for several other skyscrapers in the Bay Area. In San Francisco, the firm oversaw the two towers on Rincon Hill, and are working on the proposed towers at 30 Van Ness, 469 Stevenson,  and 395 3rd Street. In Oakland, SCB is behind the recently covered 2359 Harrison Street, the Lake Merritt BART development, and 1900 Broadway where foundation work is in progress. For Atlas, the tower facade features a mix of solid material with curtainwall glass. In contrast, the podium building is clad with panels. 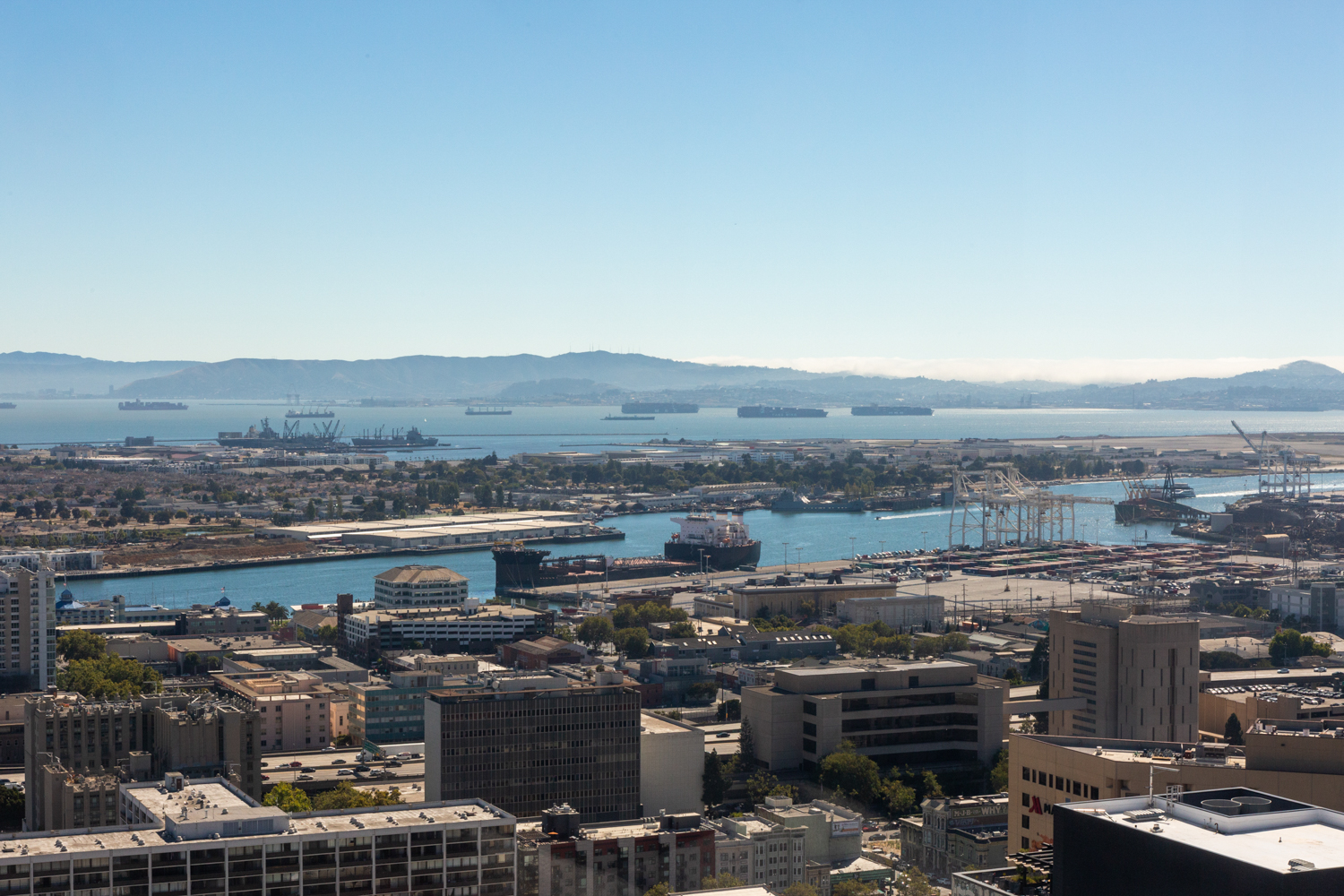 The Port Of Oakland, where the Oakland A’s proposed stadium could rise if the team commits to the project, view from the Atlas at 385 14th Street, image by Andrew Campbell Nelson 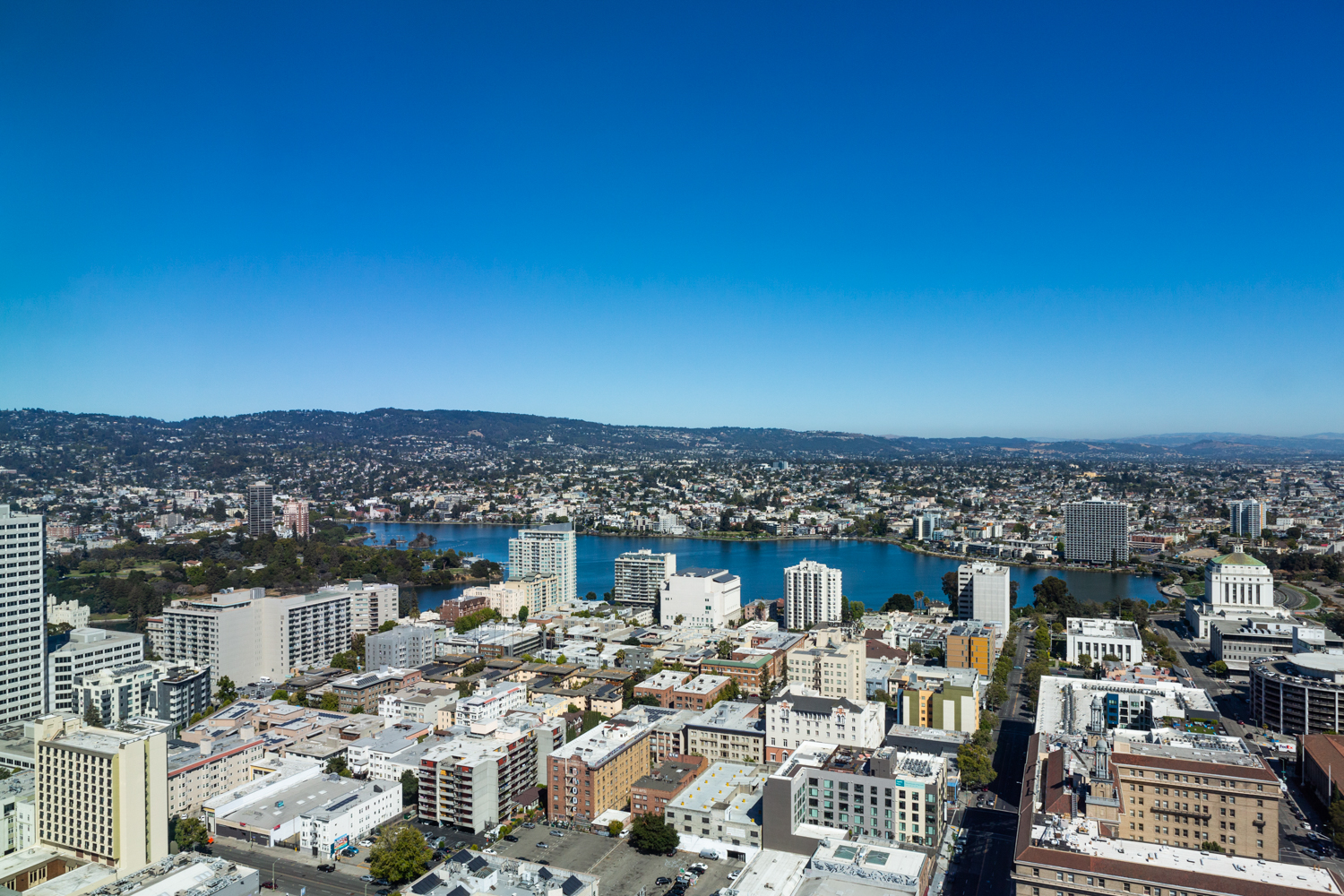 Lake Merritt from the Atlas at 385 14th Street, image by Andrew Campbell Nelson

Rising 400 feet tall, the tower’s pinnacle is just shy of Ordway Building, which currently maintains the title of the tallest building in Oakland at 404 feet tall. A recently proposed office block at 415 20th Street could usurp Ordway with a 622-foot high rooftop. 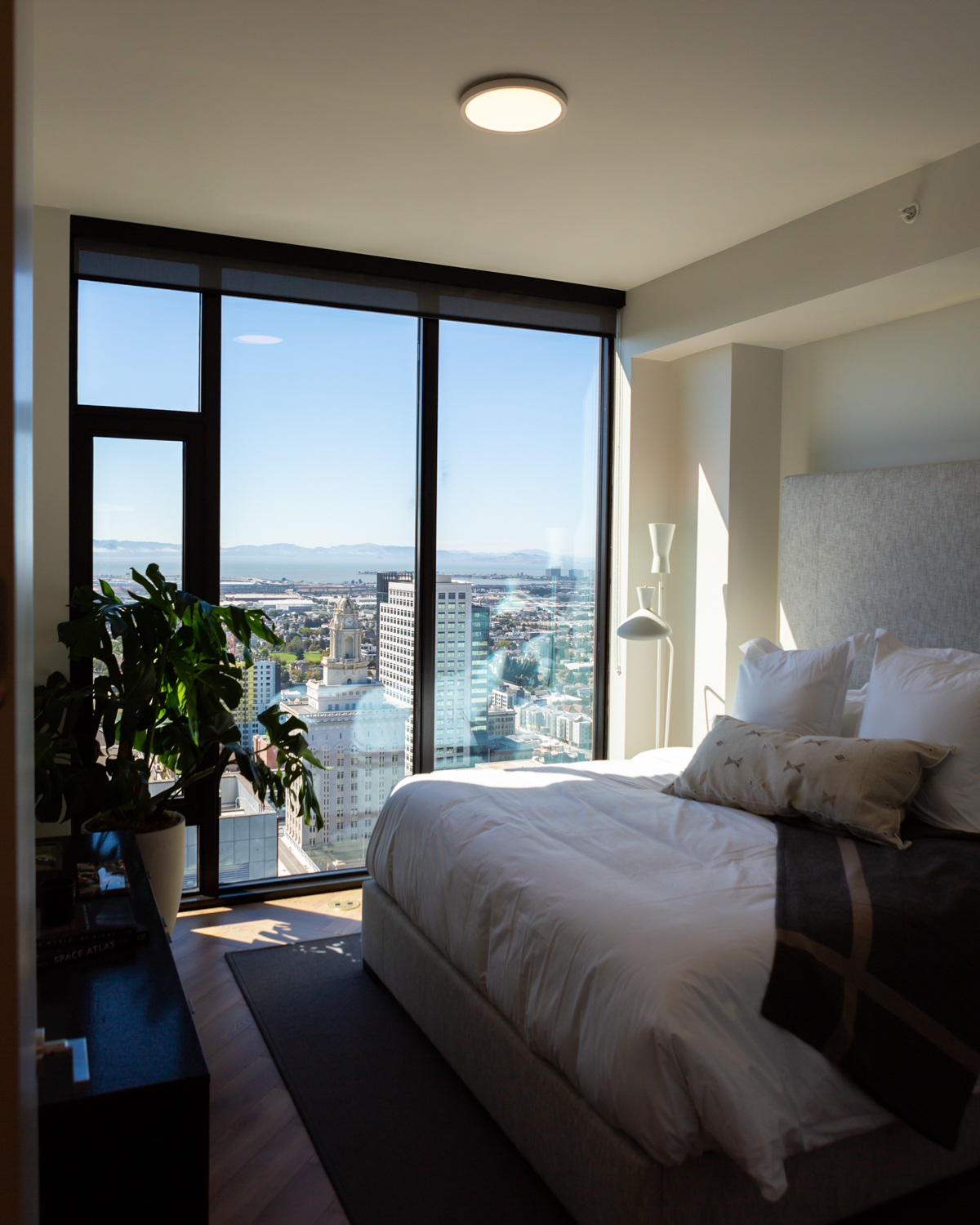 Bedroom view from the 39th floor in the Atlas at 385 14th Street, image by Andrew Campbell Nelson 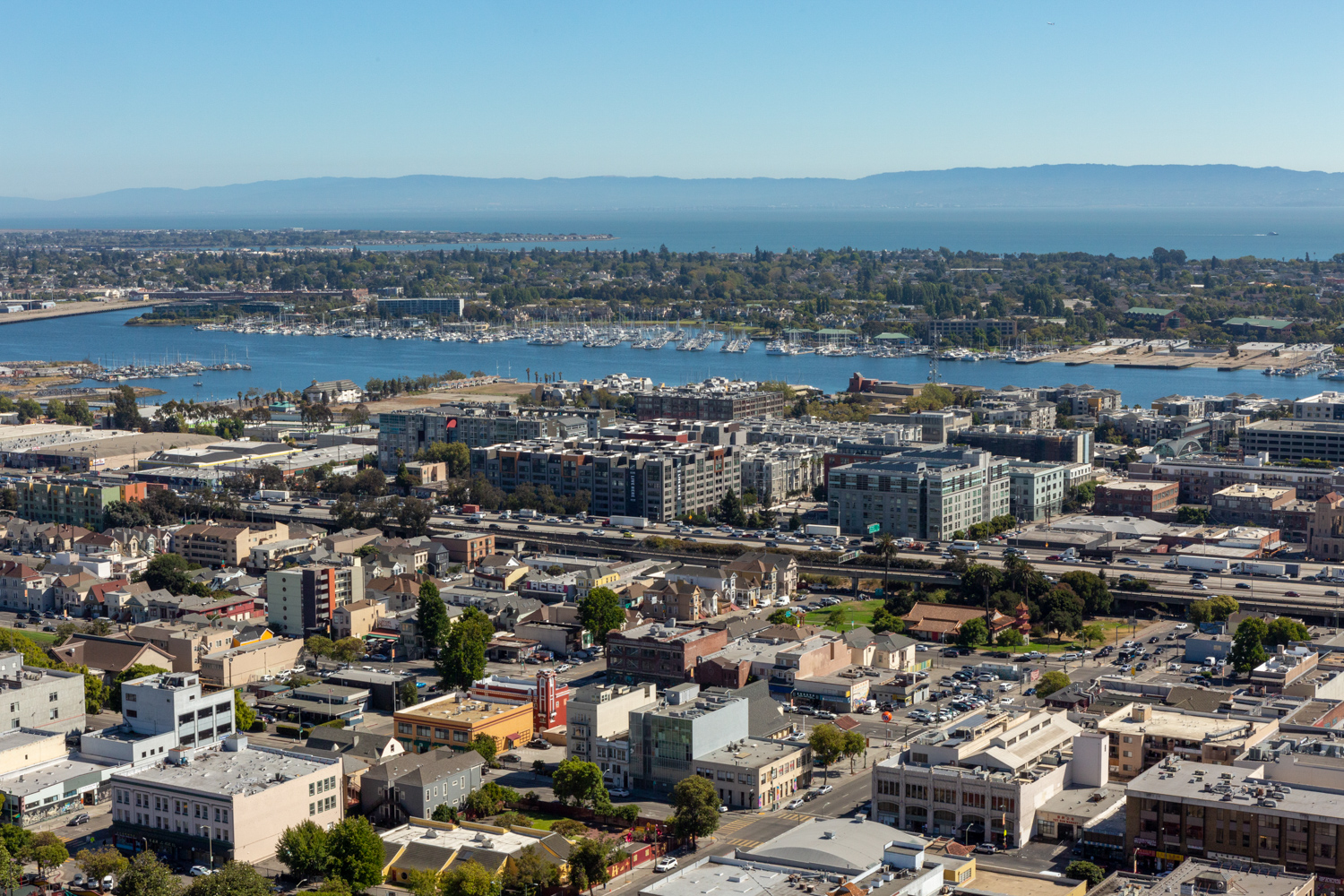 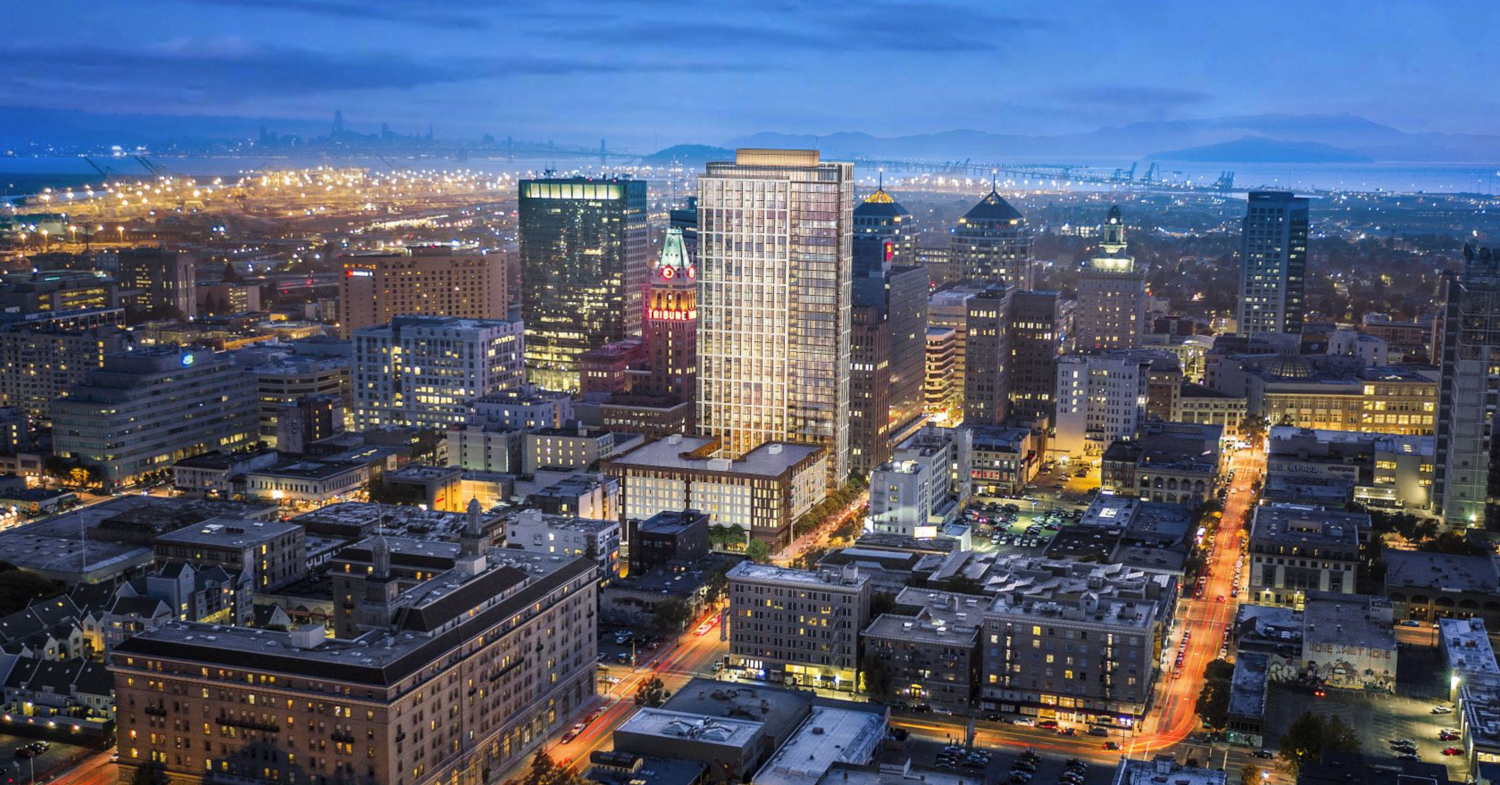 “Renters today can’t get enough of Atlas’s incredible views and unparalleled service offerings,” wrote Tony Gallo of Greystar. He went on to share, “Traffic and interest in the project were high when we launched leasing a year ago and have only continued to increase since. We’re seeing that Atlas is signing leases at a pace that is 30% over the competitors week-over-week.”

Unit prices range from $2,808 per month for a studio to $8,279 for a top-floor two-bedroom residence. For more information about Atlas, visit the building website here.