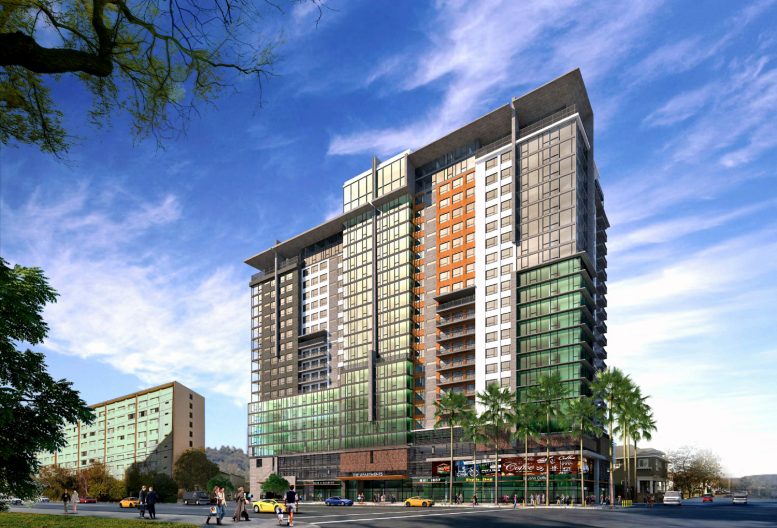 Spartan heights, the proposed twenty-three story dormitory tower at 100 North 4th Street in Downtown San Jose is making its way through the city government. This month, the city moved to rezone the site as part of the downtown primary commercial district. The developers, Republic Urban, are hoping to capture housing demand from the nearby San Jose State University. 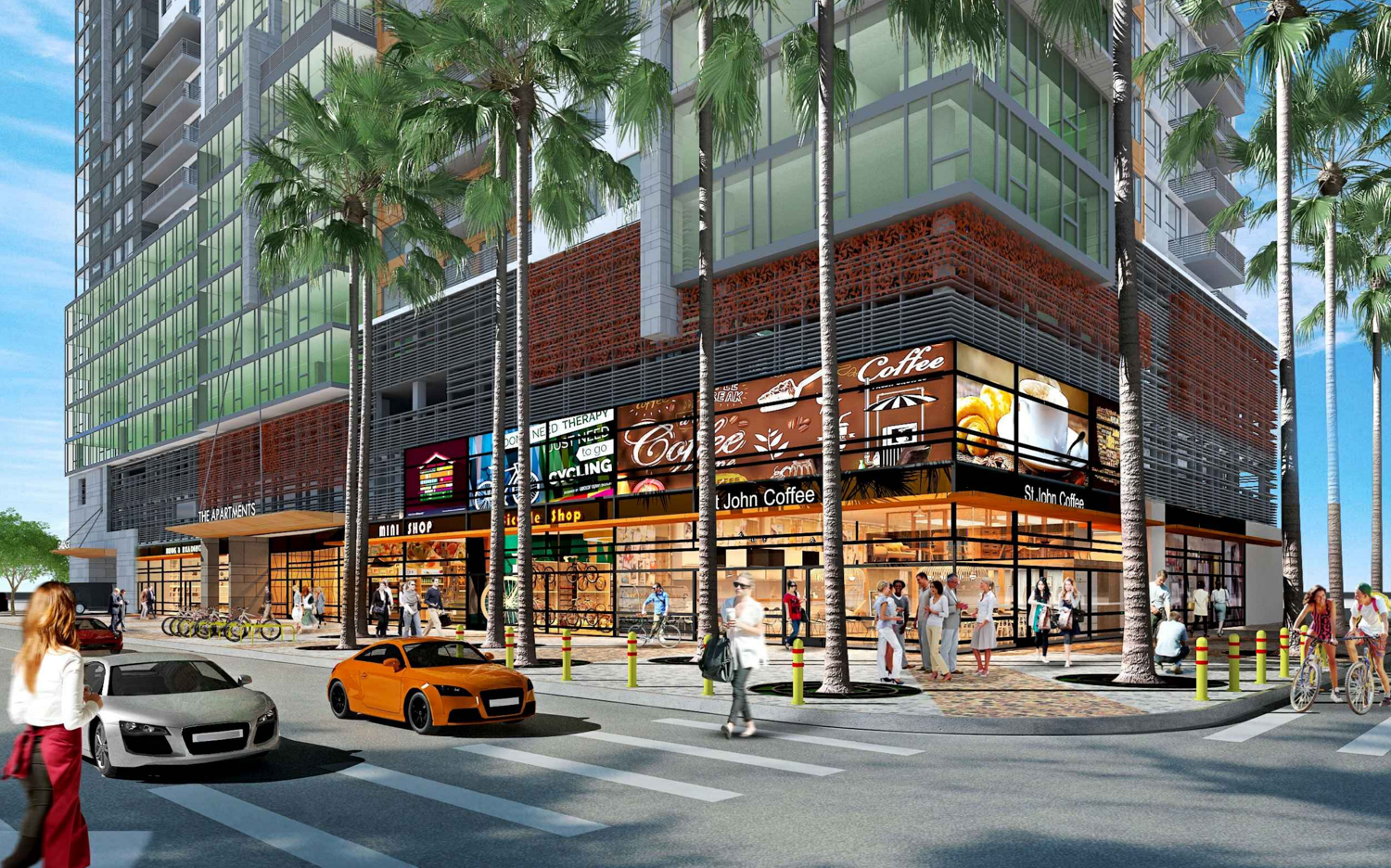 The 250-foot tower will yield 650,000 total square feet. Of the 298 dwelling units, 135 will be two-bedroom, 95 will be three-bedroom, and 68 will be four-bedroom. With shared bedrooms for students, the building is expected to bring 1,424 total beds for students. The ground floor will contain over 8,000 square feet to rent for retail and a 4,200 square foot student lounge. The project includes 406 parking spots for bicycles and 287 parking spots for vehicles across roughly 100,000 square feet. The future BART station in Downtown San Jose will also be just a few blocks away. 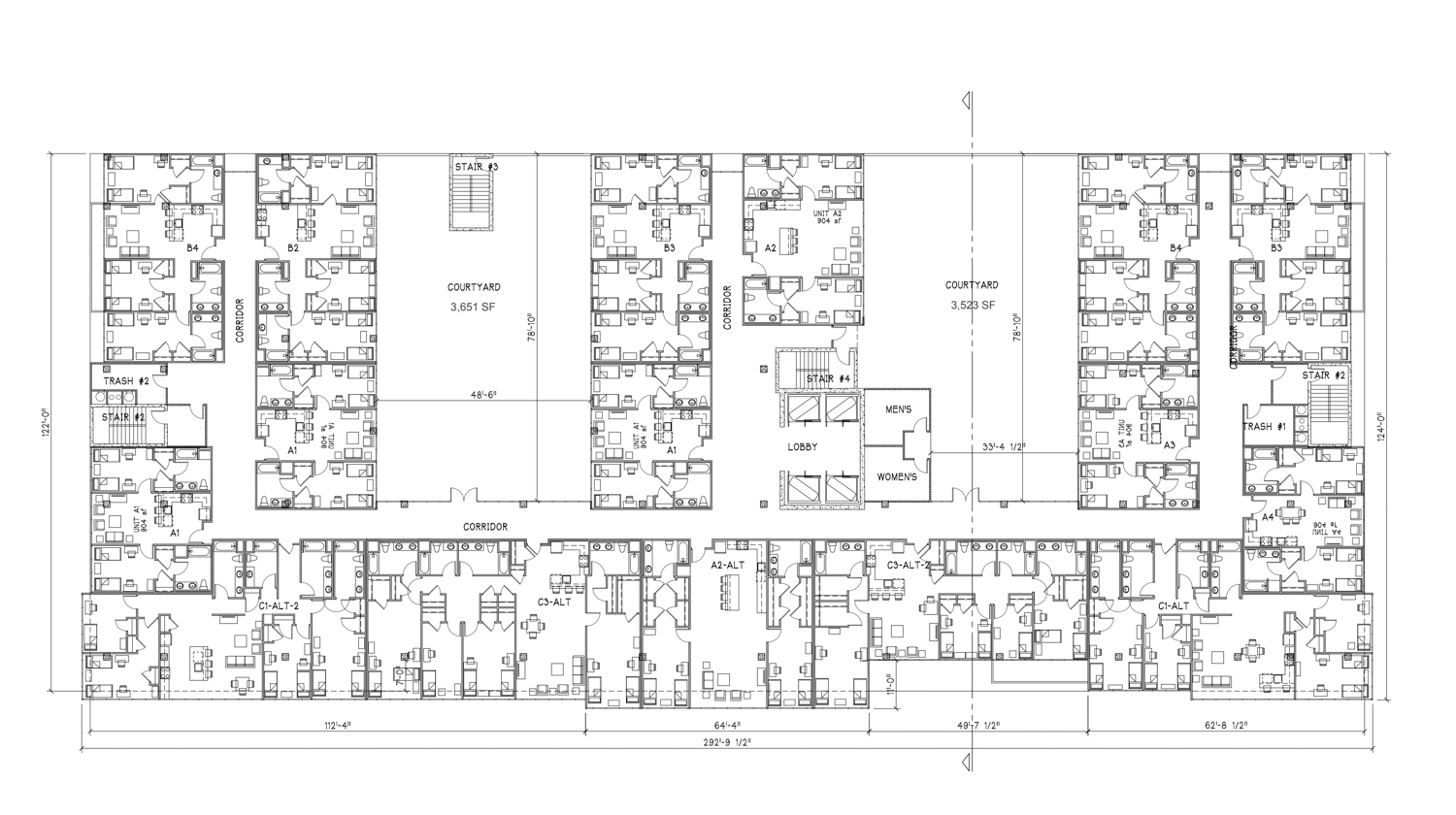 The tower’s E-shaped footprint allows for two shared terraces on the fifth floor. Both will yield roughly 3,500 square feet. One of these community spaces will feature terraced seating, landscaping, and a fire pit. The other will offer a small pool, jacuzzi, and a pool-side lounge area. Isaacson, Wood, and Associates are responsible for the landscaping.

When interviewed about the prospect of the tower, land acquisition director at Republic Urban, Konstantin Voronin, told Mercury News, “when Google, Adobe and others expand downtown, those workers will likely displace the students now in multi-family housing.” He went on to say, “Spartan Heights will be designated for San Jose State student housing.” 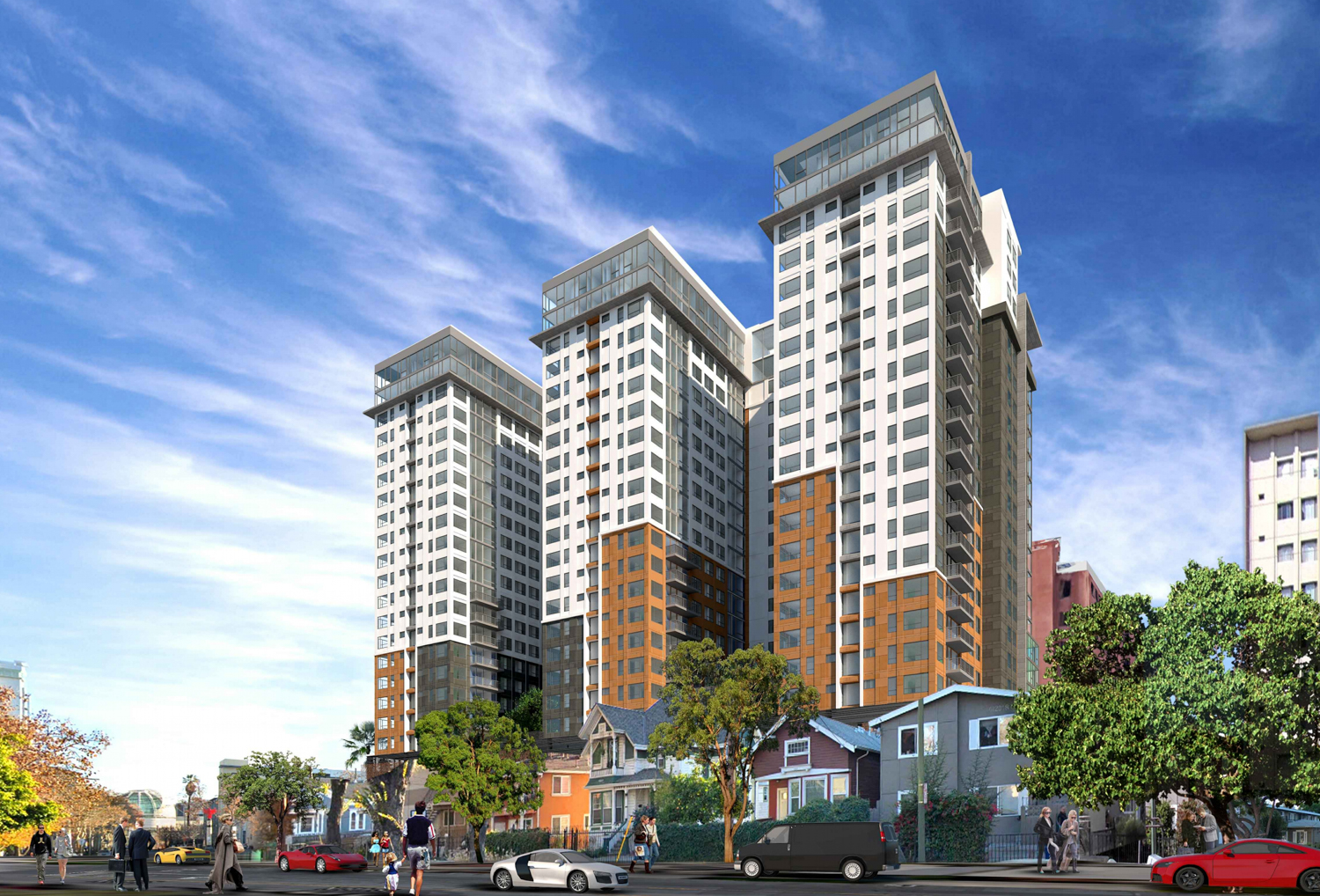 Future students attending SJSU will have a comfortable ten-minute walk, or rushed seven minutes, from the proposed site to their campus. For those interested in visiting their neighboring college campus, Santa Clara University campus is not quite walking distance but is just twenty minutes away by bus. 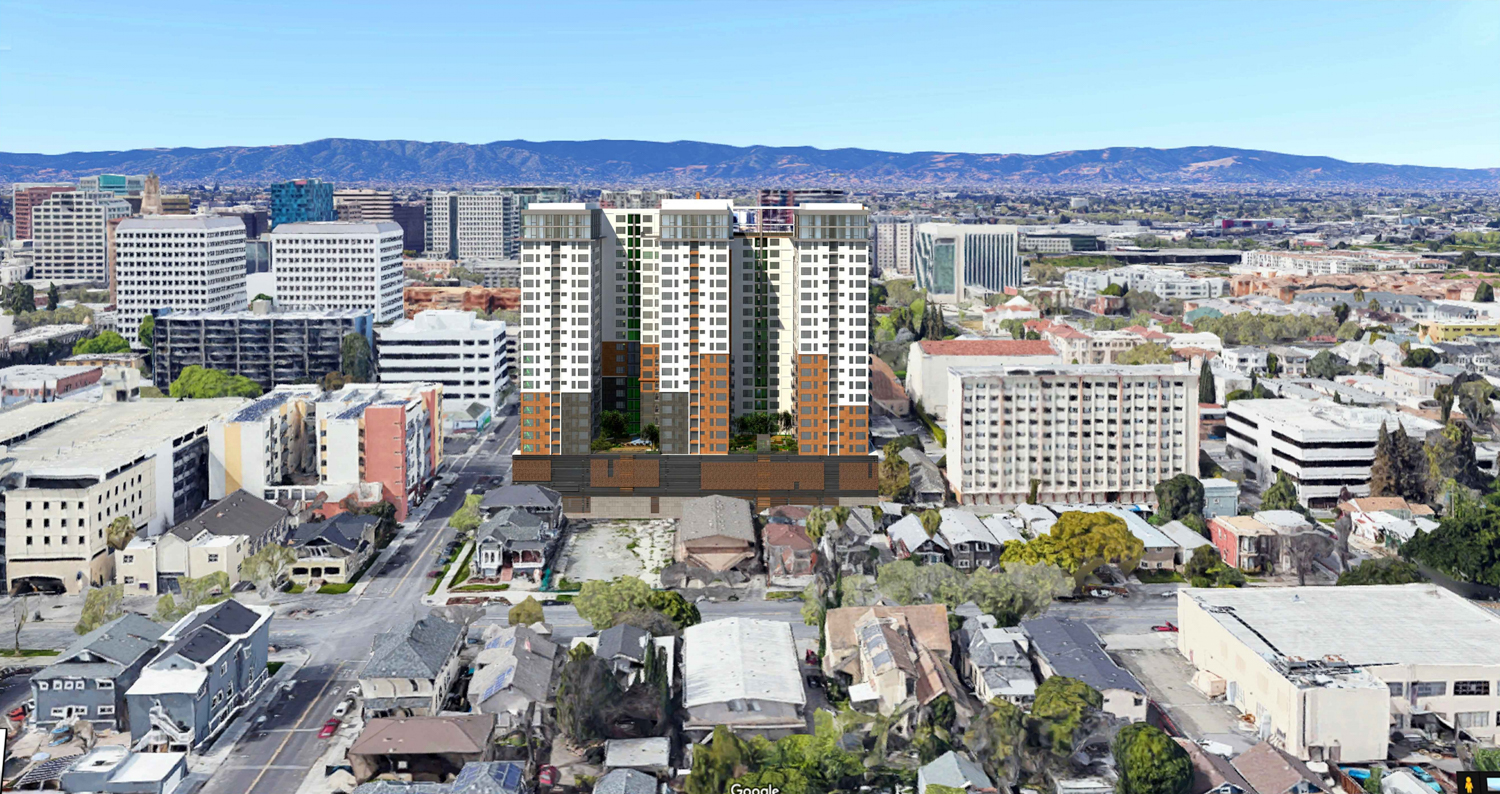 Brent Lee is the Saratoga-based investor behind the project, and LPMD Architects are responsible for the design. The tower’s blend of curtain wall glass and panels will make it a notable addition to the skyline, particularly with the concrete awning at the top of the building. It almost appears to be six buildings mashed together, as if to make up for San Jose’s low-rise profile. 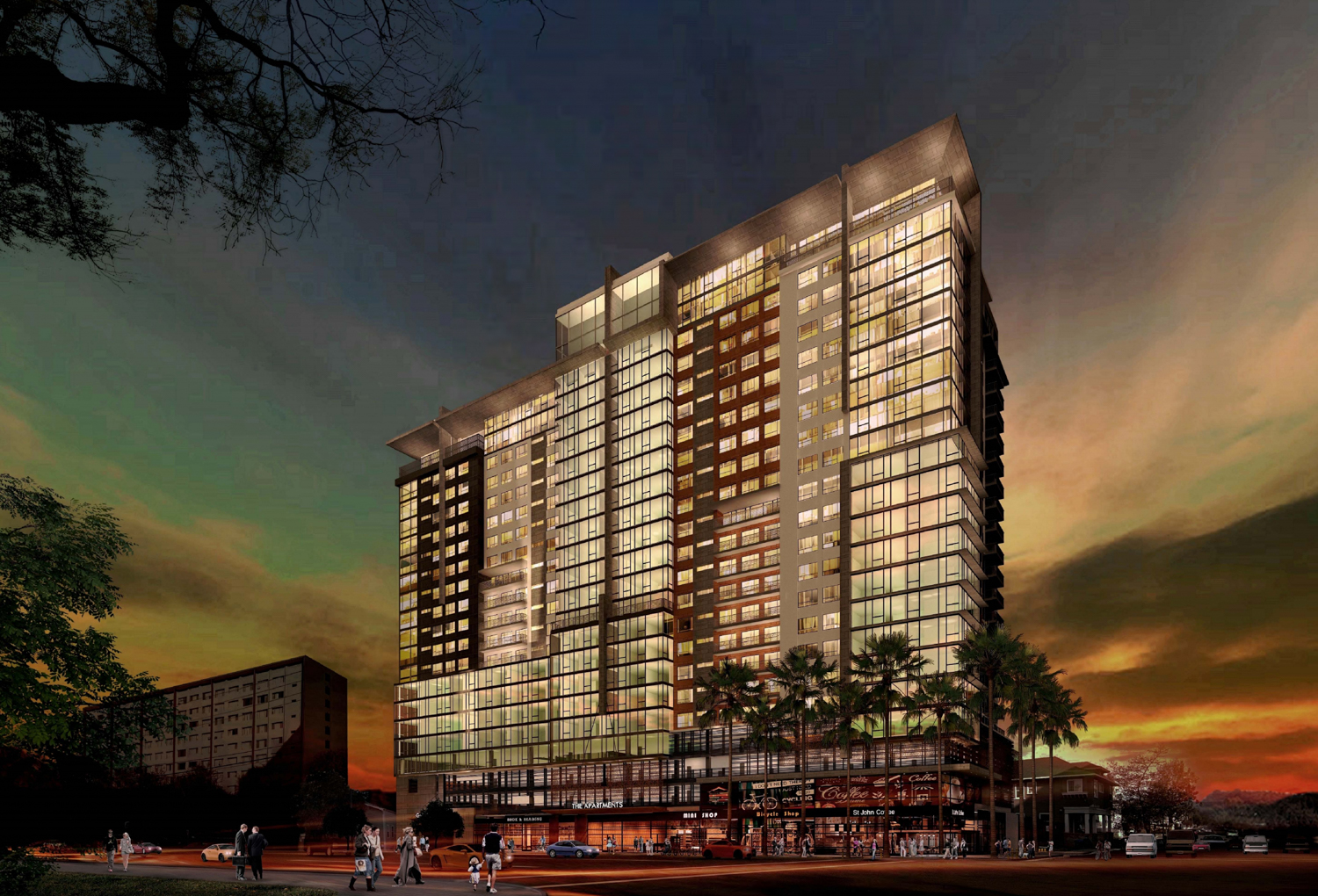 Spartan Heights as seen from across East Saint Johns and North 5th Street at dusk, design by LPMD Architects

The dormitory tower is slated to be built one block from MIRO, the city’s current tallest structure.

The project will require the demolition of roughly 2,200 square feet of existing buildings. Once fully approved, construction can be expected to last approximately three years.

Be the first to comment on "New Renderings for SJSU’s Spartan Heights at 100 North 4th Street, Downtown San Jose"