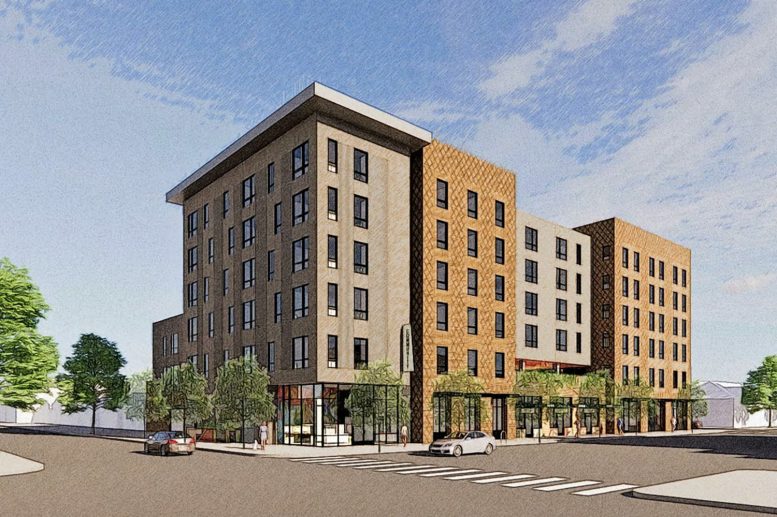 Development permits have been filed, and renderings revealed, for a new mixed-use building at 2700 International Boulevard in Fruitvale, Oakland. The 72-foot structure will yield 100,385 square feet, of which 57,298 square feet will be dedicated to the 75 apartments on-site, all of which are to be sold as affordable housing. The Bay-Area based Unity Council is responsible for the development. 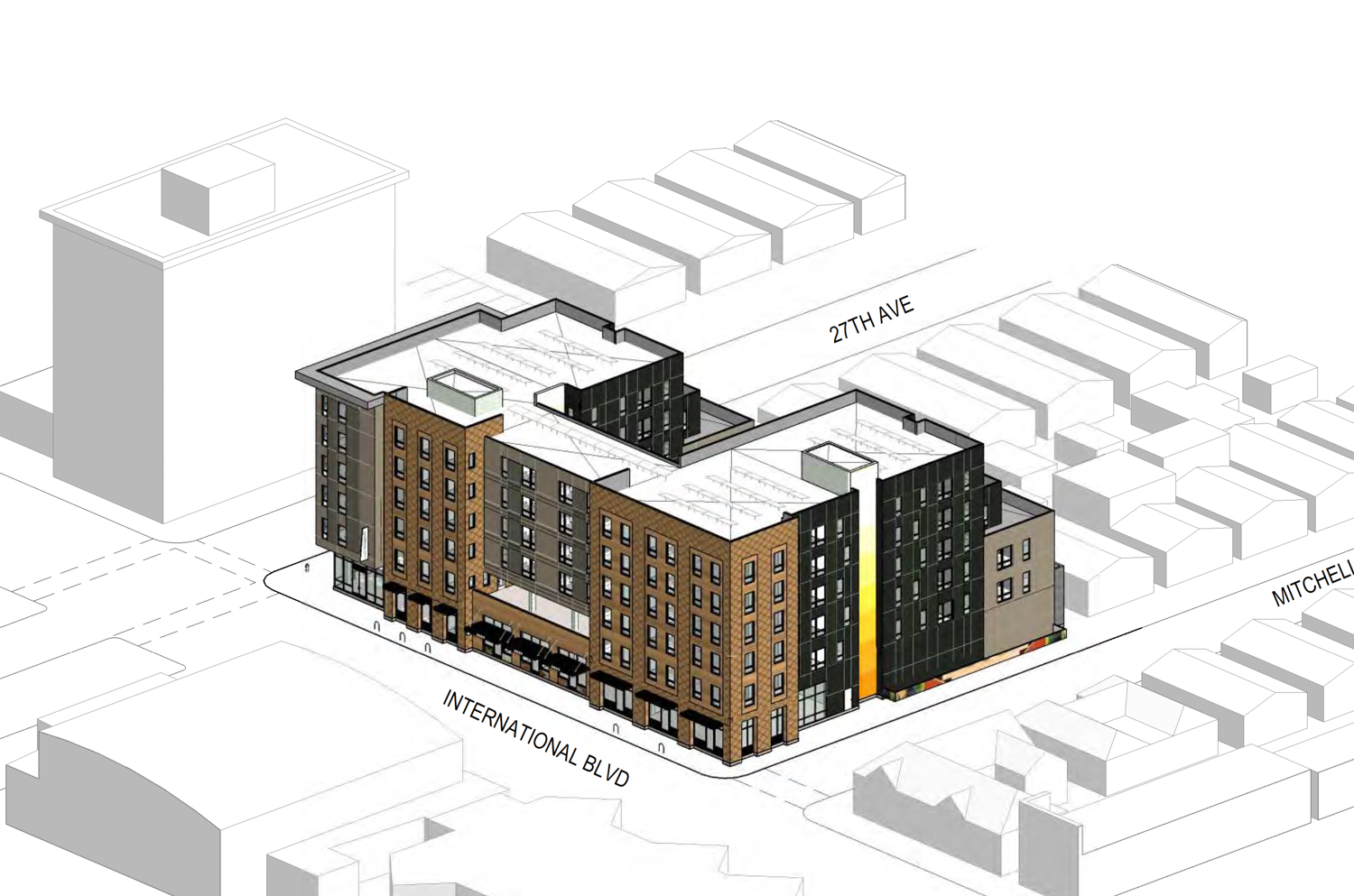 Pyatk Architects are responsible for the design. The lion’s share of the facade will be clad with a tumbleweed-color brick with a crosshatch pattern and stucco. Cement plaster will be used in portions of the skin as well, though the most eye-catching feature will be a vertical laminate rain screen panel, dyed in a gradient, represented as either going from red and yellow to white. 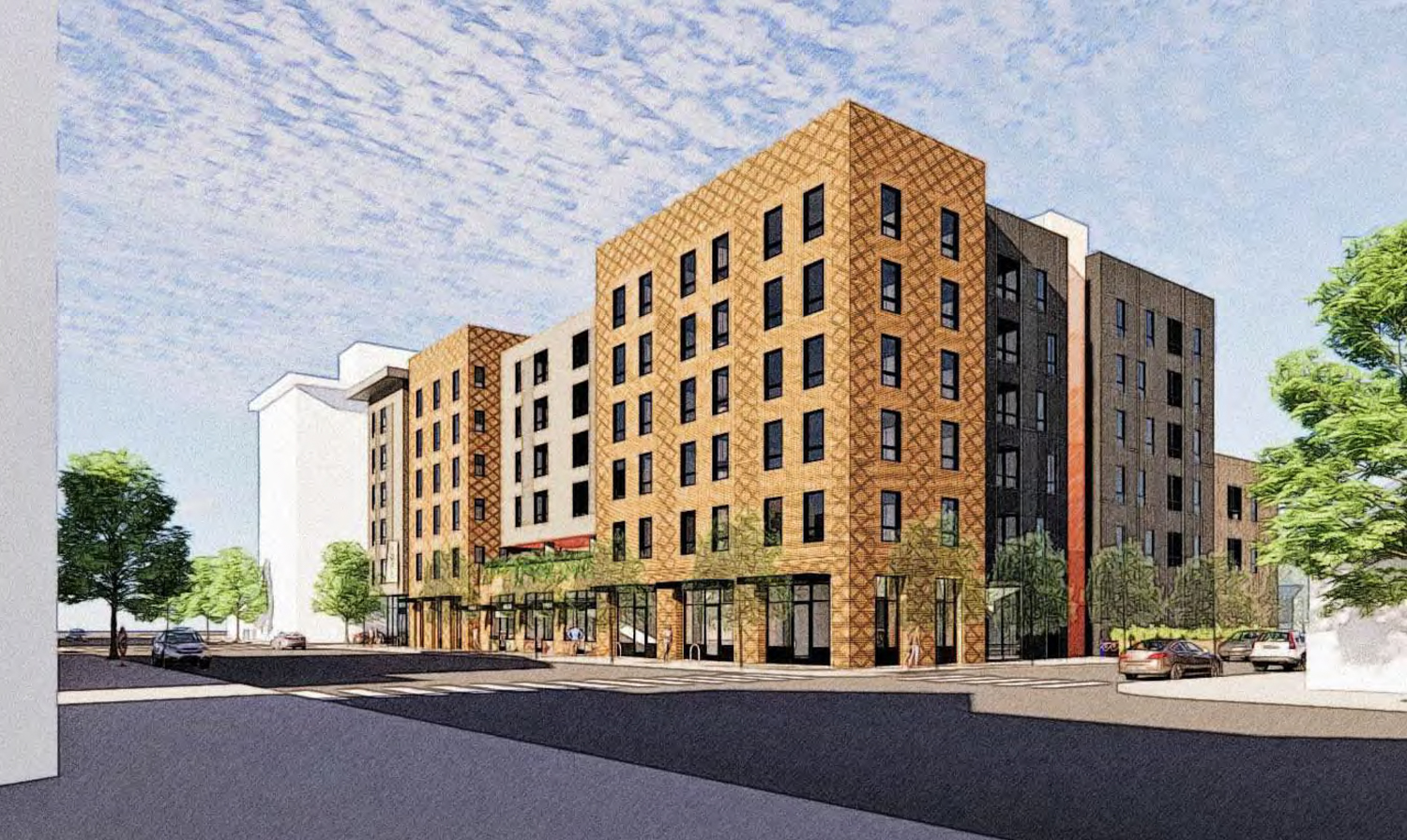 The apartments will be centered around a shared sixty-foot-wide courtyard on the second level, on top of the podium of commercial, parking, and service facilities. A California Buck-Eye tree will serve as the focal point for the shared space. Landscape design is by the Cliff Lowe Associates. Surrounding the communal area will be community rooms, the laundry space, an elevator lobby, and thirteen of the units. The residential accommodations will vary in size, with 35 one-bedroom, 21 two-bedroom, and 19 three-bedroom units. 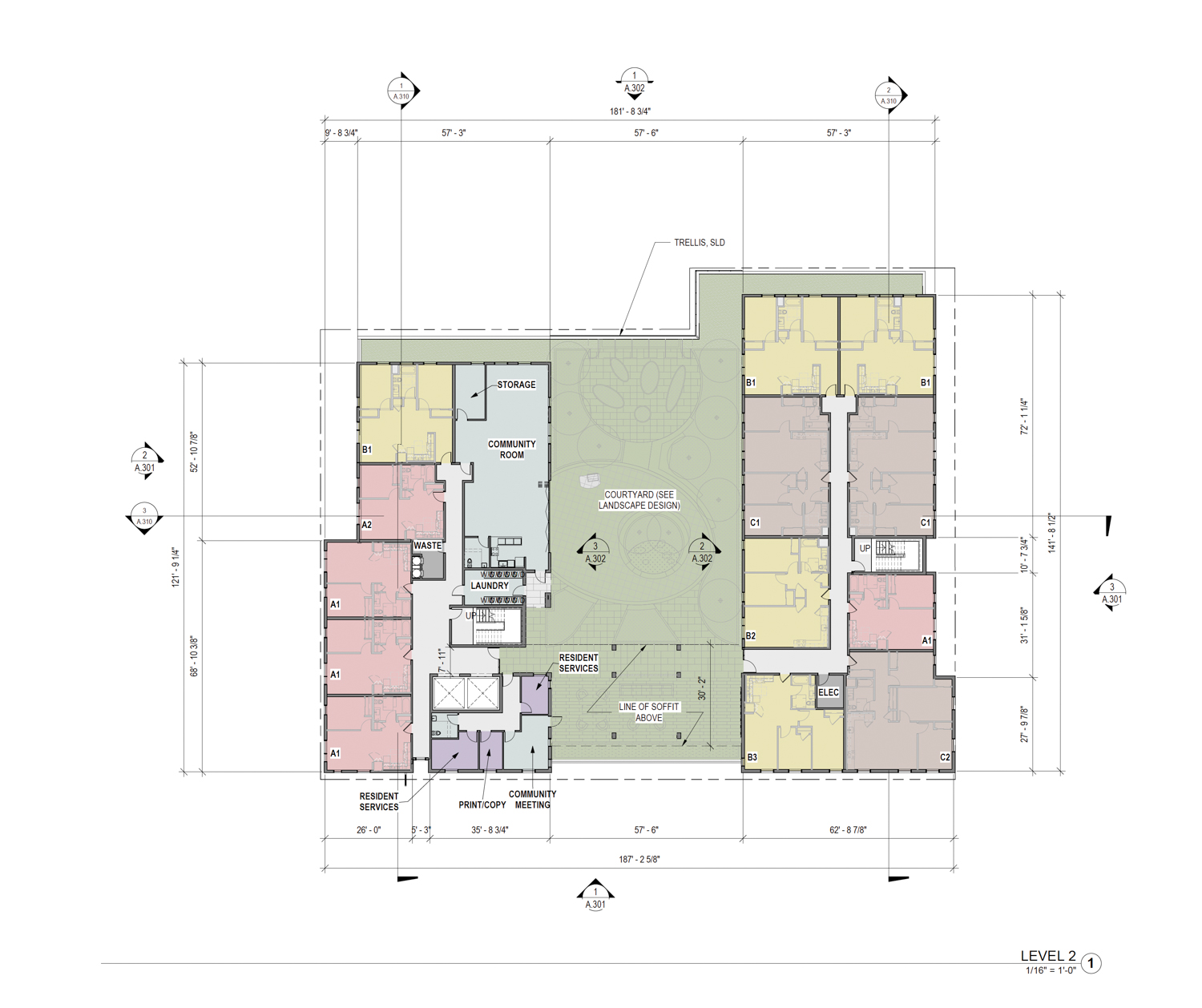 The development will require removing two existing buildings, a three-story and a two-story commercial building, one with a single unit. The remaining portion of the parcel is occupied by surface parking. The added structure will produce 56 parking spaces across 12,500 square feet, with 7,000 square feet for ground-floor retail, 3,000 square feet of amenities, and 1,372 square feet for an office space. 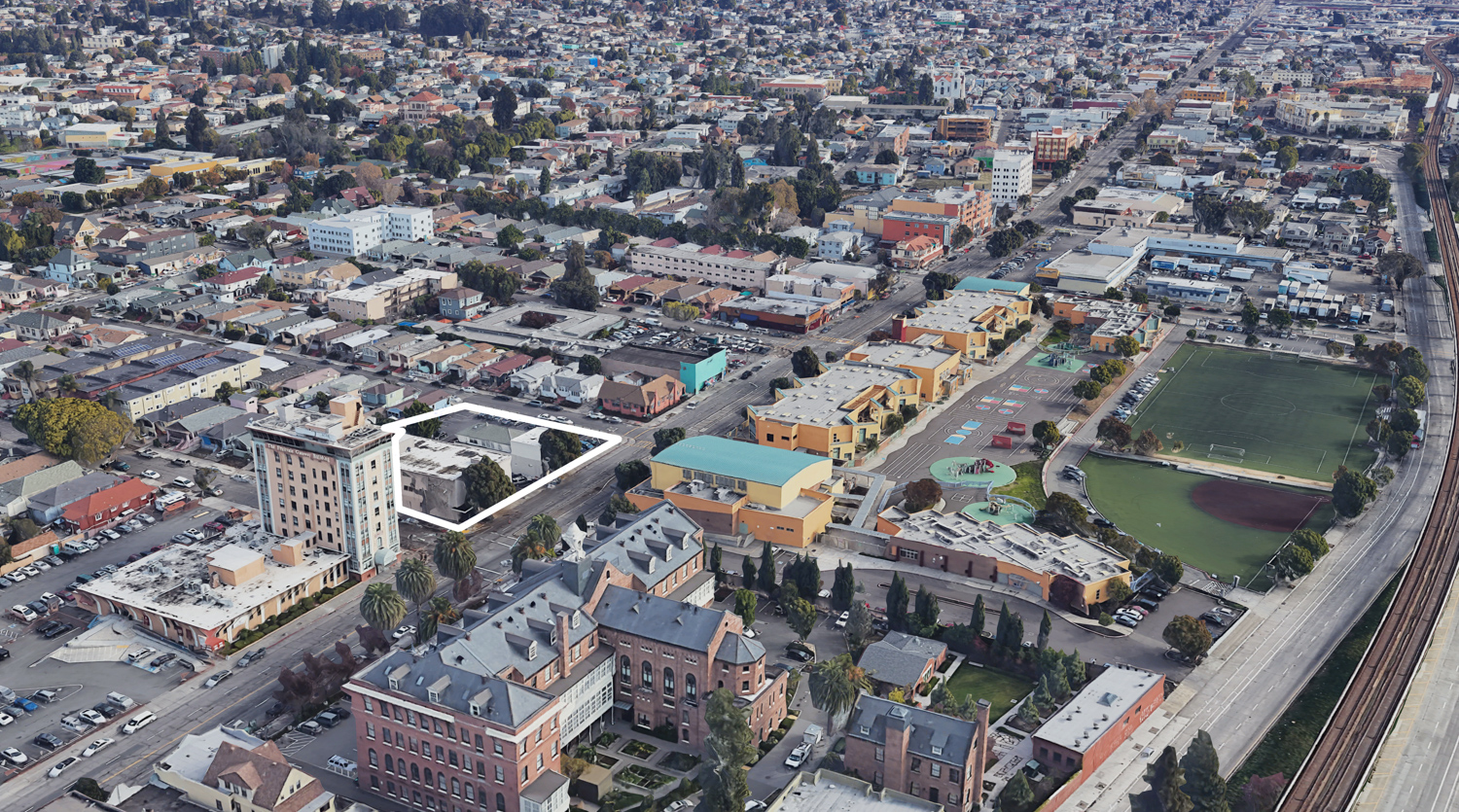 The site is less than fifteen minutes away from the Fruitvale BART Station by foot, with copious amounts of retail in the surrounding vicinity. 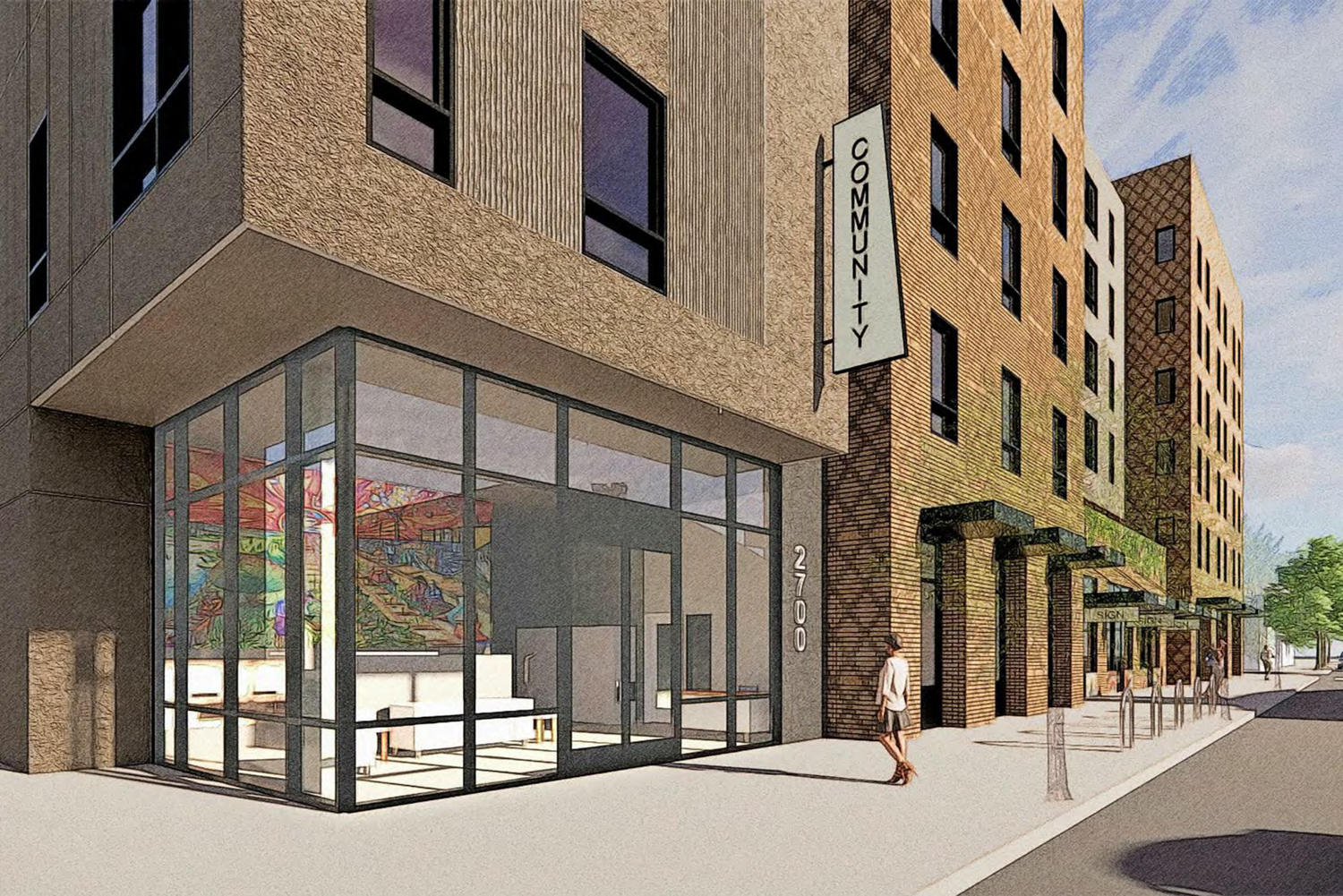 Be the first to comment on "Renderings Revealed for 2700 International Boulevard, Fruitvale, Oakland"