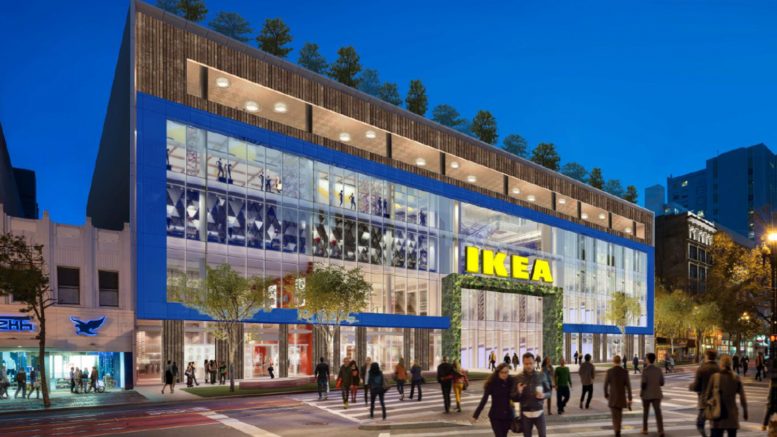 One of the first stories covered by SFYIMBY was the announcement that IKEA’s parent company, Ingka Centres, purchased 945 Market Street in SoMa for over a quarter billion dollars. Now, the property owners has filed a request for a project review meeting with the City of San Francisco. The application reveals new detail on the most significant real estate development in the Bay Area expected for 2021.

The application shows the Swedish furniture store will take up 89,750 square feet, nearly a quarter the size of a typical 350,000 square feet IKEA. To compensate for the size and location, the store will use space-efficient strategies to keep the store viable for an urban carless consumer base. The proposal will become the company’s second downtown location, after an IKEA in London’s Kings Mall.

In September of this year, the building, also known as 6×6, was sold to Ingka Centres by the joint venture held between Alexandria Real Estate Equities and TMG Partners. The final price was $260 million.

At the meeting, Ingka Center is requesting the city approve amendments to the building Master Sign Program and minor exterior alterations along the entrances and storefronts. As previously reported, the project has the vocal support of Mayor London Breed, giving the developers political capital to improve the odds of fast approval and expedited construction. IKEA expects to open its doors to the city in 2021.

Be the first to comment on "New Details Revealed for IKEA at 945 Market Street SoMa, San Francisco"