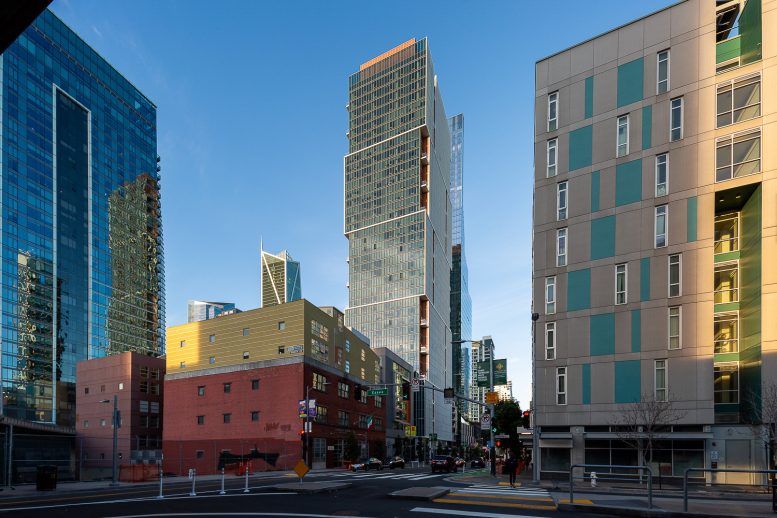 The 440-foot tower at 500 Folsom Street is tied with two other structures as the 43rd tallest building in the Bay Area, located in SoMa, San Francisco. 500 Folsom Street, also known as Transbay Block 9, was between 2016 and 2019 to contribute housing and retail. The project was developed by the Real Estate Investment Trust Essex, TMG Partners, and BRIDGE Housing. 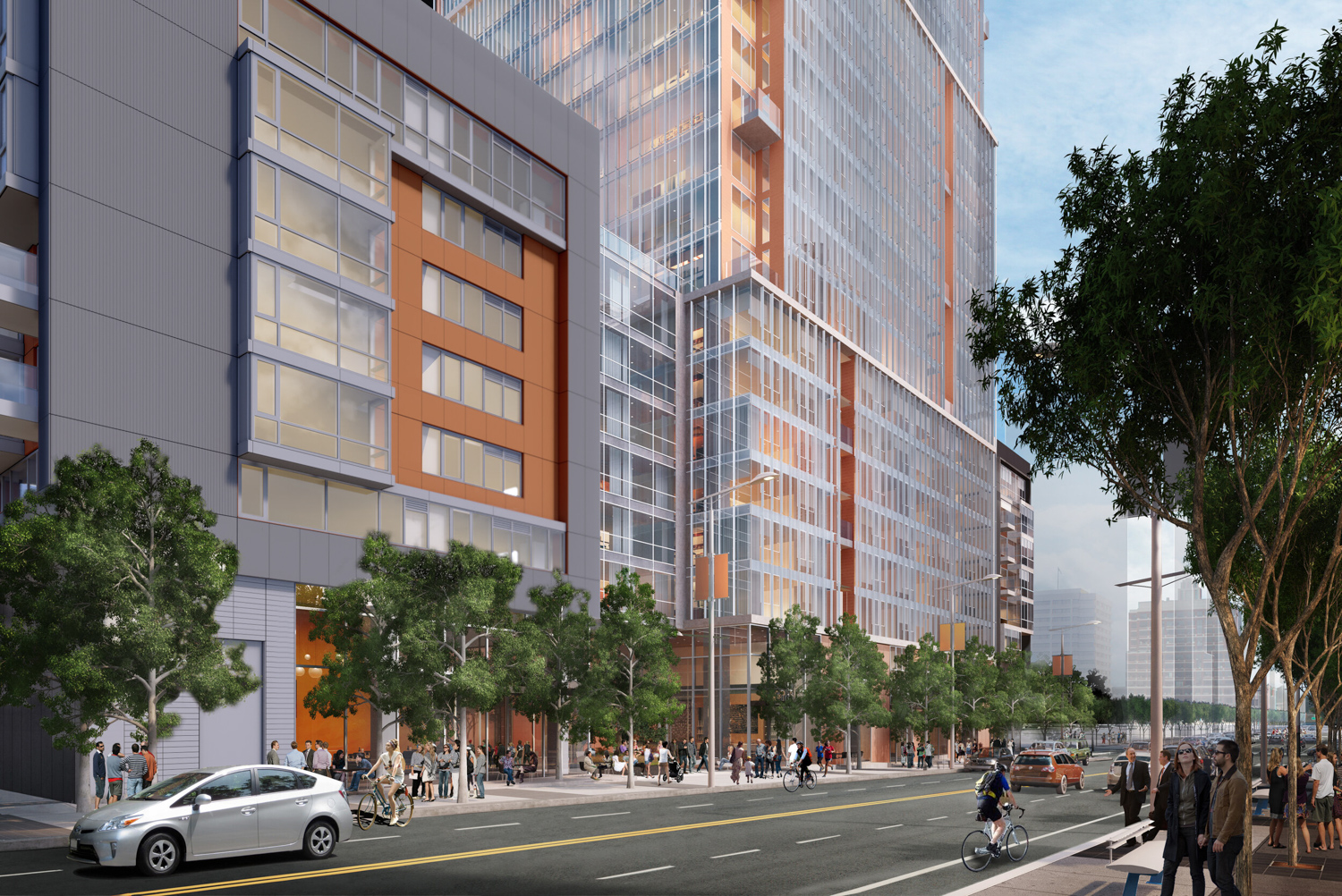 The 42-story project sits on a 31,560 square foot parcel, creating 524,000 square feet with 3,730 square feet for four retail spots. The development adds 545 units to the Bay Area housing market, of which 109 are designated for low-income housing to buyers earning 50% of the Area Median Income (AMI). The low-income housing will be spread across the bottom half of the tower and the nine-story podium that covers most of the lot. Section 8 housing vouchers and other valid rental assistance programs can be used for the property. Parking is included below grade for 289 vehicles. 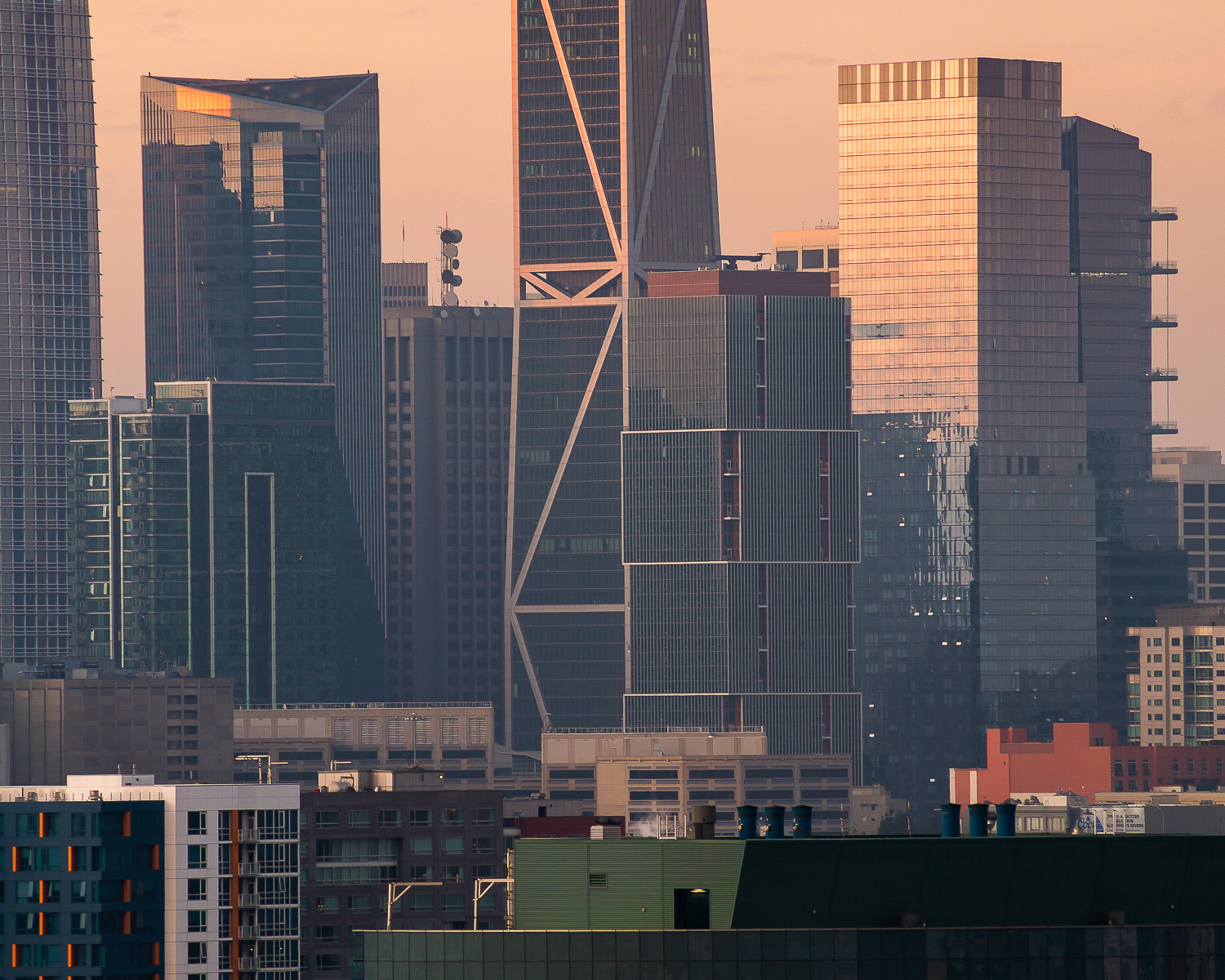 500 Folsom Street in the skyline, image by Andrew Campbell Nelson

The residences range in size from studios to two-bedroom units and three + bedroom penthouse units. The largest unit spreads across 1,366 square feet. Monthly rental prices range from under three thousand dollars to over seven thousand dollars. Each unit will feature high-end appliances and gourmet kitchen space, while select housing has private balcony access. Curated amenities are focused on social and wellness benefits, with a few terraces facing the Bay or Twin Peaks with a community garden area and barbecue grills. Other amenities include a yoga studio, fitness center, pet spa, and Peloton bikes. Management is located onsite. 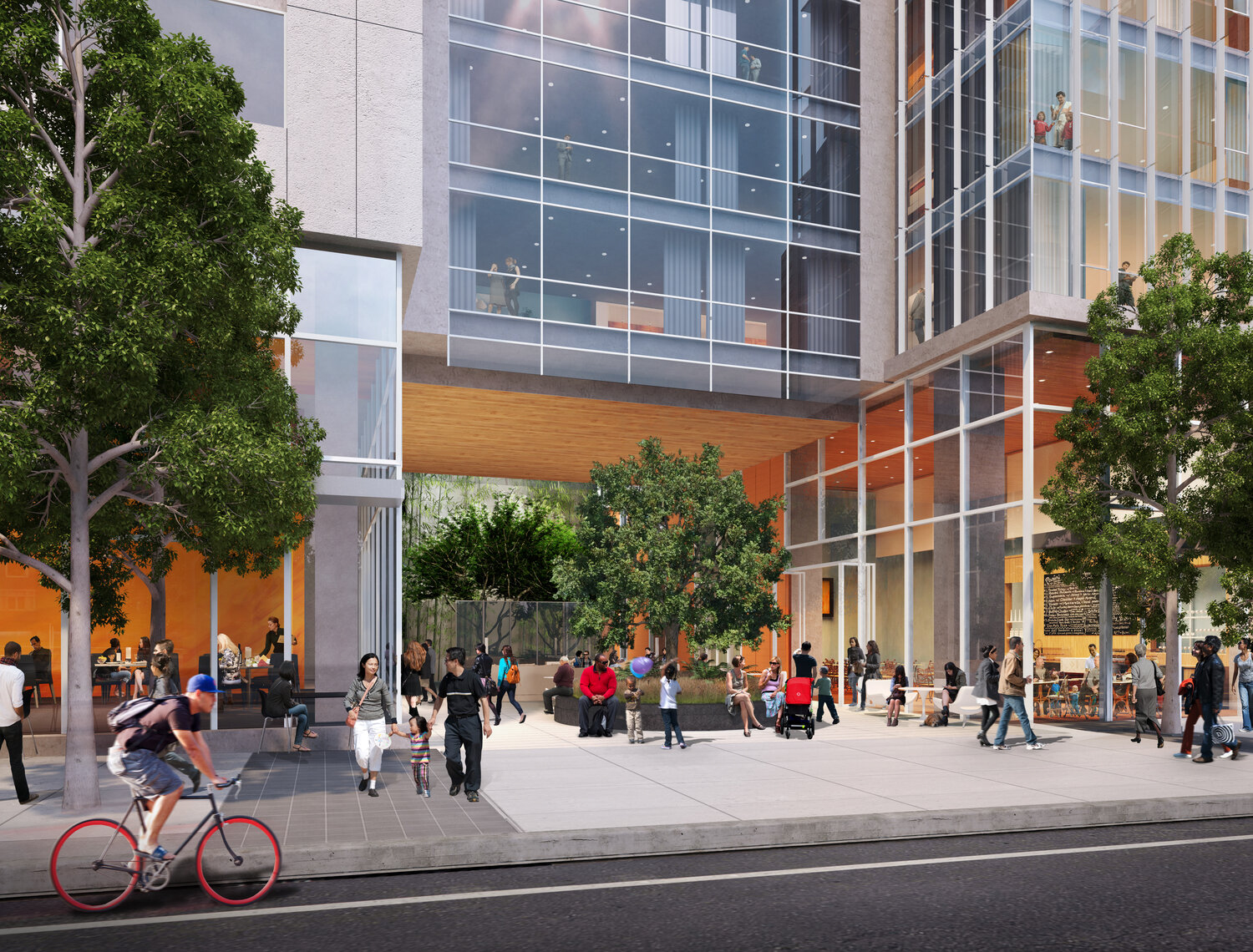 Skidmore, Owings & Merrill, i.e., SOM, is responsible for the tower design, while Fougeron Architecture is the base podium architect. SOM writes of the project, “The building’s stacked composition echoes the scale of the neighborhood, strengthened by a series of alternating vertical spaces punctuated by red terracotta and residential balconies. Two mid-rise podiums, designed by Fougeron Architecture, anchor the tower and form an outdoor paseo that creates a link from Folsom to Clementina Street and Oscar Park beyond.” 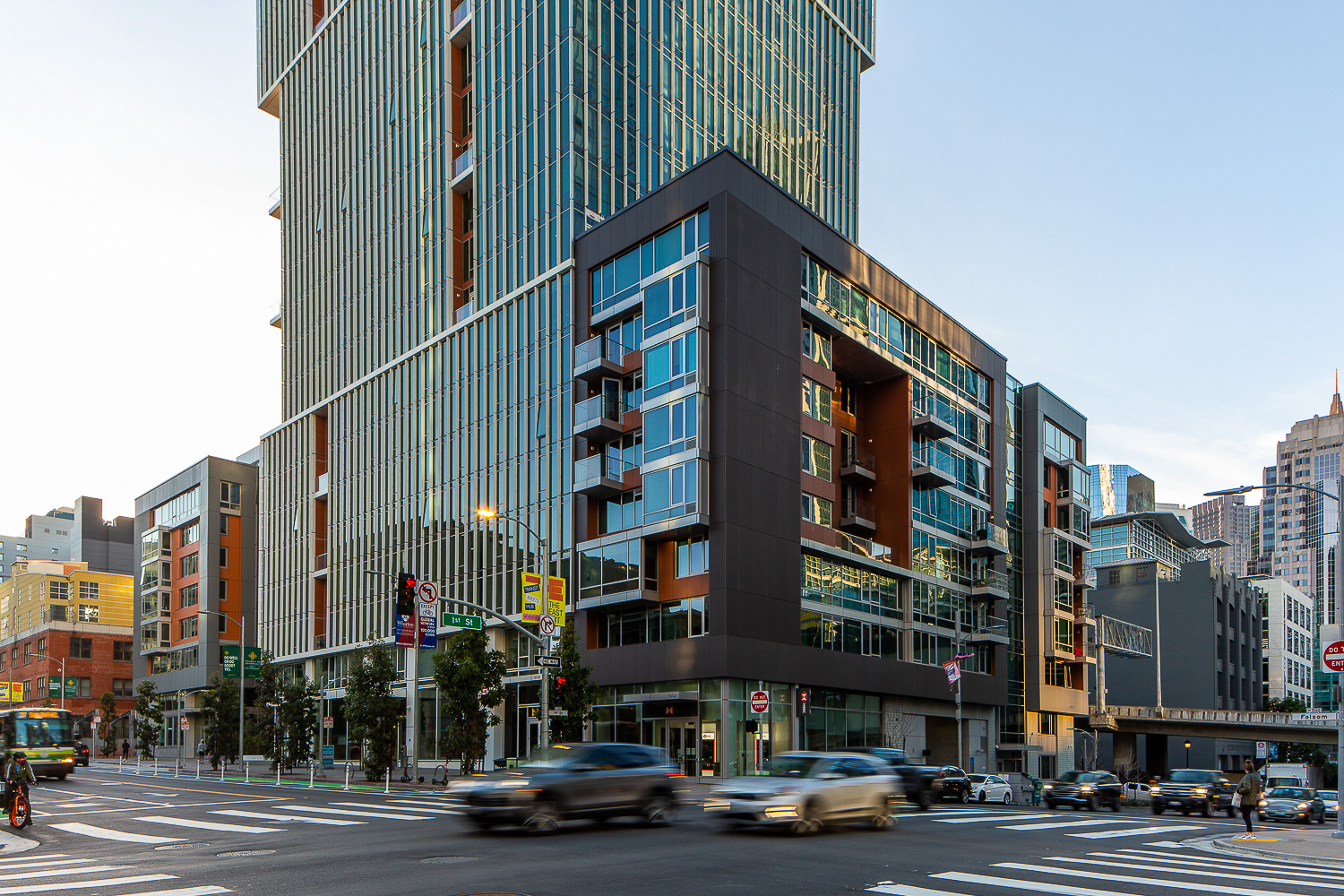 The skyline-defining Transbay Block developments running along Folsom Street have opened a share of retail spaces, ranging from a grocery store to restaurants and cafes. Residents at 500 Folsom are a block from the Transbay Terminal and four blocks from the Montgomery Street BART Station. A popular destination for evening recreation is the nearby Rincon Park and waterfront promenade opposite the Embarcadero, less than ten minutes away on foot. 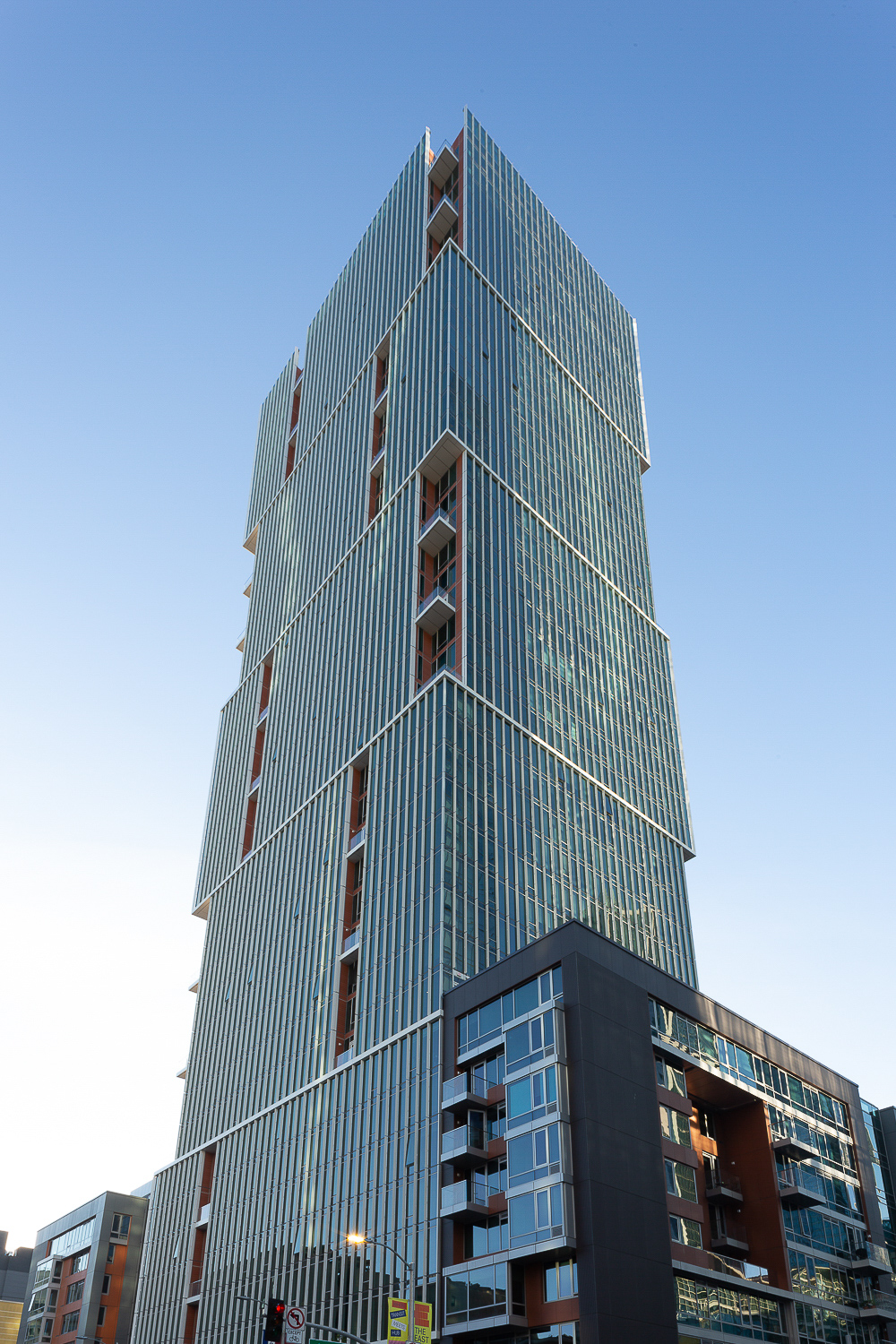 500 Folsom Street viewed from below, image by Andrew Campbell Nelson

TMG and Essex purchased the site for $43.6 million, and building permits filed in 2015 show that development cost $189.8 million. The structure received LEED certification.