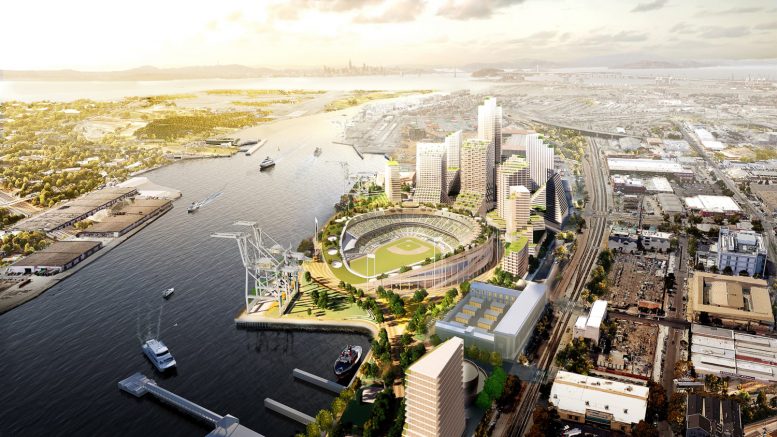 The Oakland Ball Park with the San Francisco skyline on the horizon, rendering by BKF Engineers

Recently published documents by the City of Oakland show that the Oakland Waterfront Ballpark District project could see two 600-foot towers beside the 35,000-person ballpark. If fabricated today, they would be the tallest skyscrapers in California outside of San Francisco and Los Angeles. Hines’ 622-foot proposal for Oakland at 415 20th Street is the only proposal that would be taller. The Oakland A’s are the project developer and sponsor, operating through the Oakland Athletics Investment Group LLC. 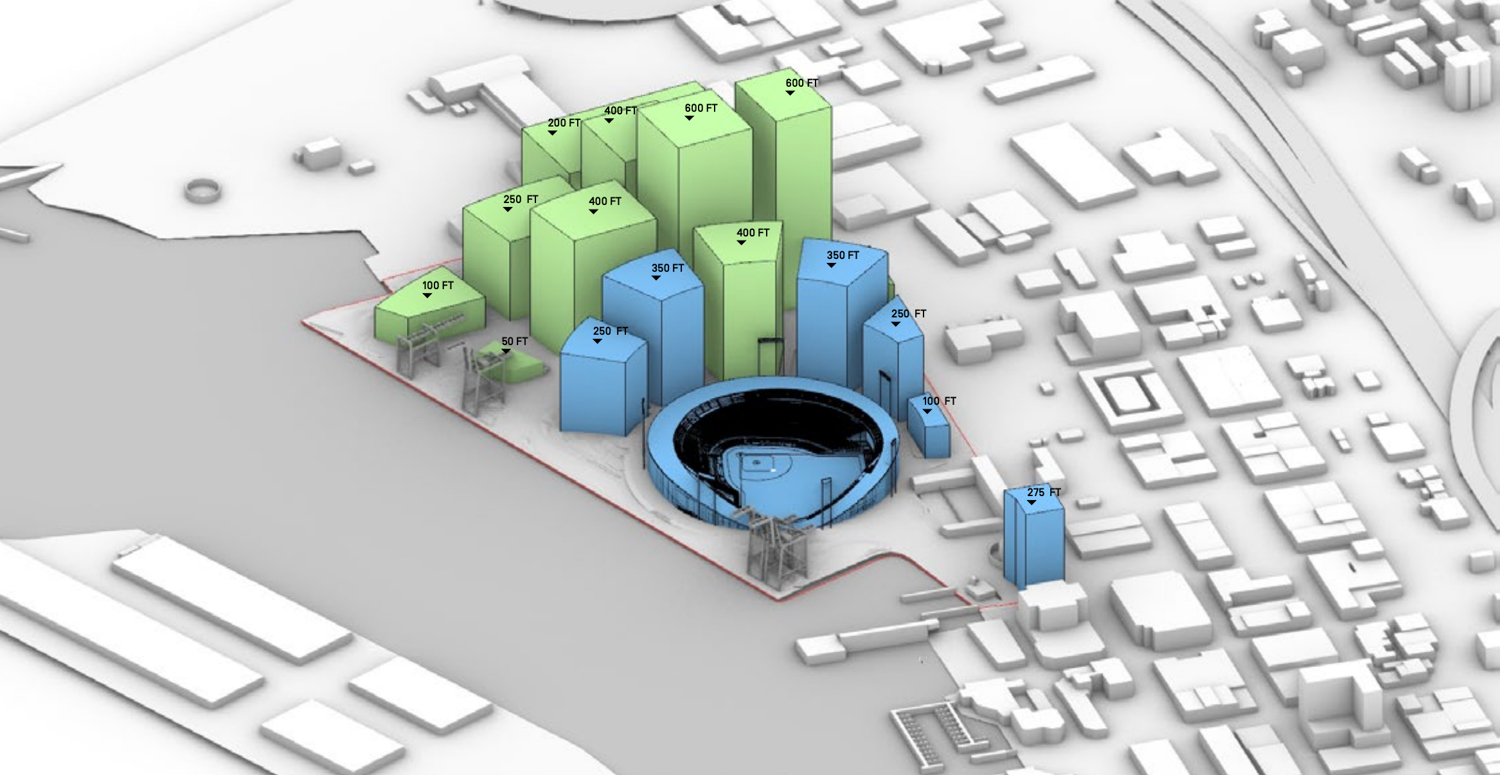 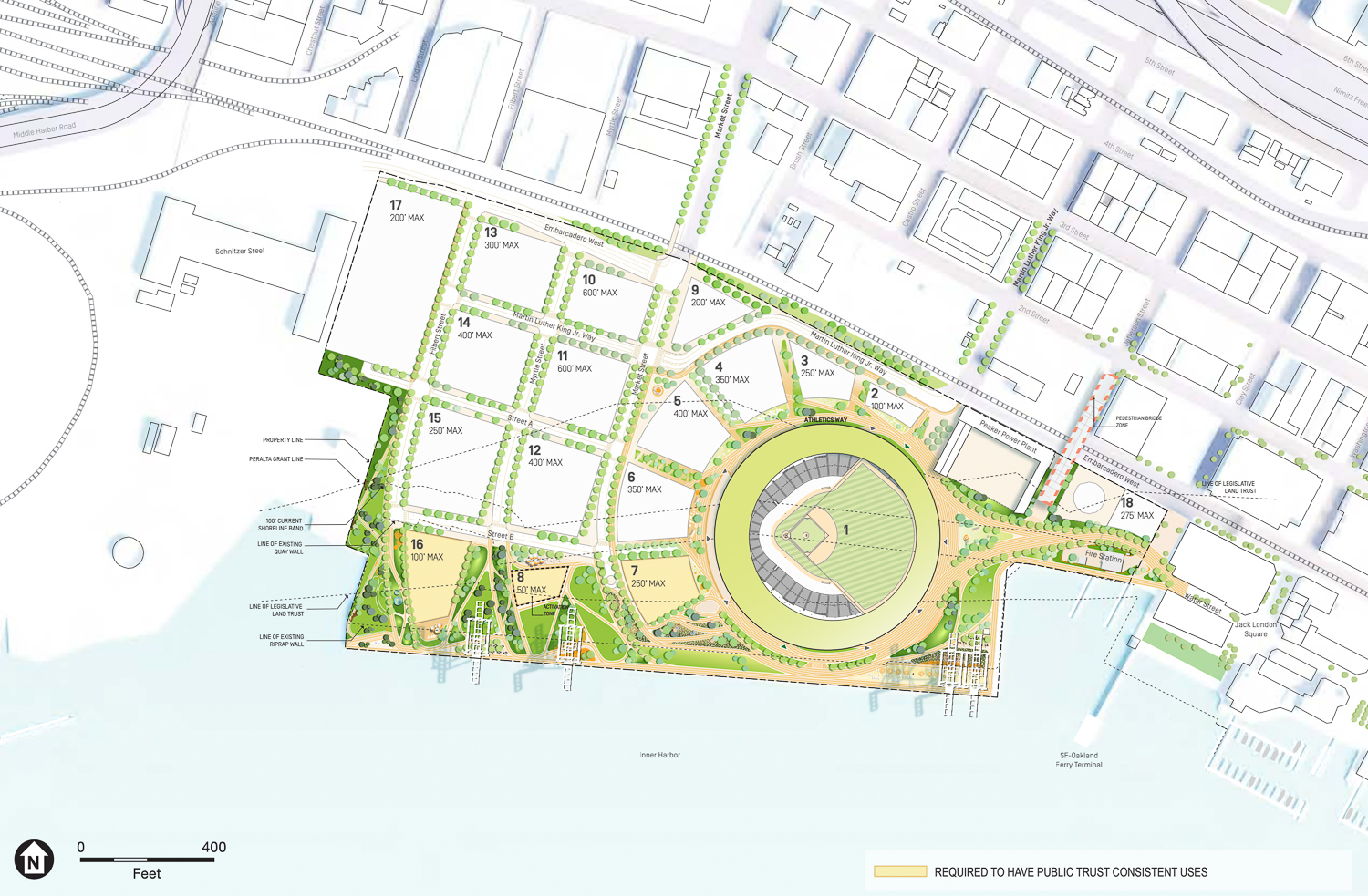 The newly released EIR draft states that groundbreaking could be as early as 2022. Phase one of construction can be done following twenty-four months, leaving the Oakland A’s ready to start playing at the new location soon after. Developers could reach full buildout as early as seven years after groundbreaking in 2029; however, this schedule depends on market conditions, financing, or unforeseen delays. The EIR notes this timeline is a conservative estimate. 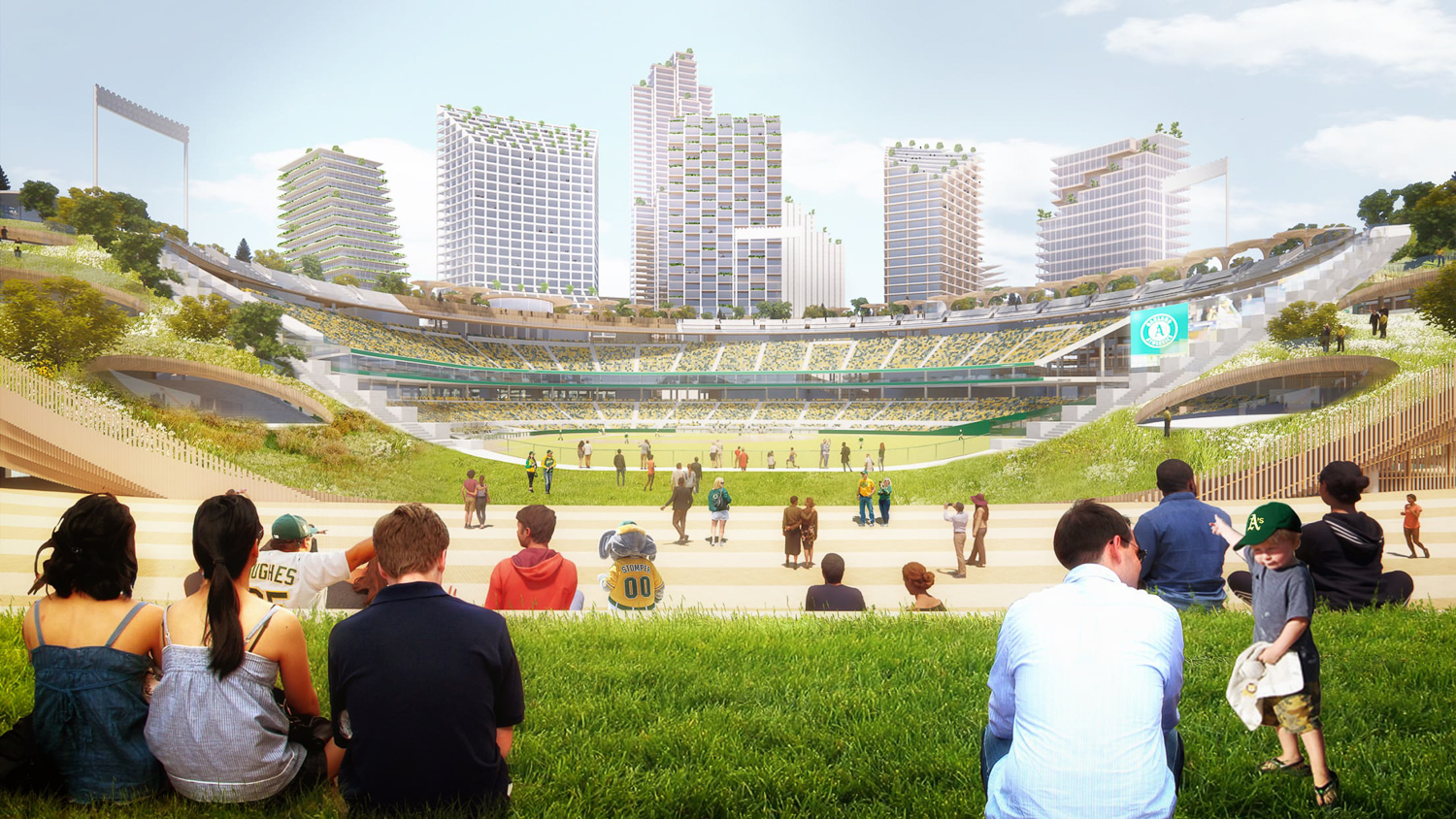 The master plan aims to provide a compact mixed-use hub just west of the Jack London District and twenty minutes away from the 12th Street BART station by foot. That’s under ten minutes for cyclists. The district could include 3,000 new residential units, 270,000 square feet for retail, 50,000 square feet for an indoor performance venue with a capacity for 3,500 people, and 280,000 square feet for a hotel with 400 guest rooms and conference facilities. The accommodation for an eye-watering 8,900 vehicles is spread across the eighteen parcels. 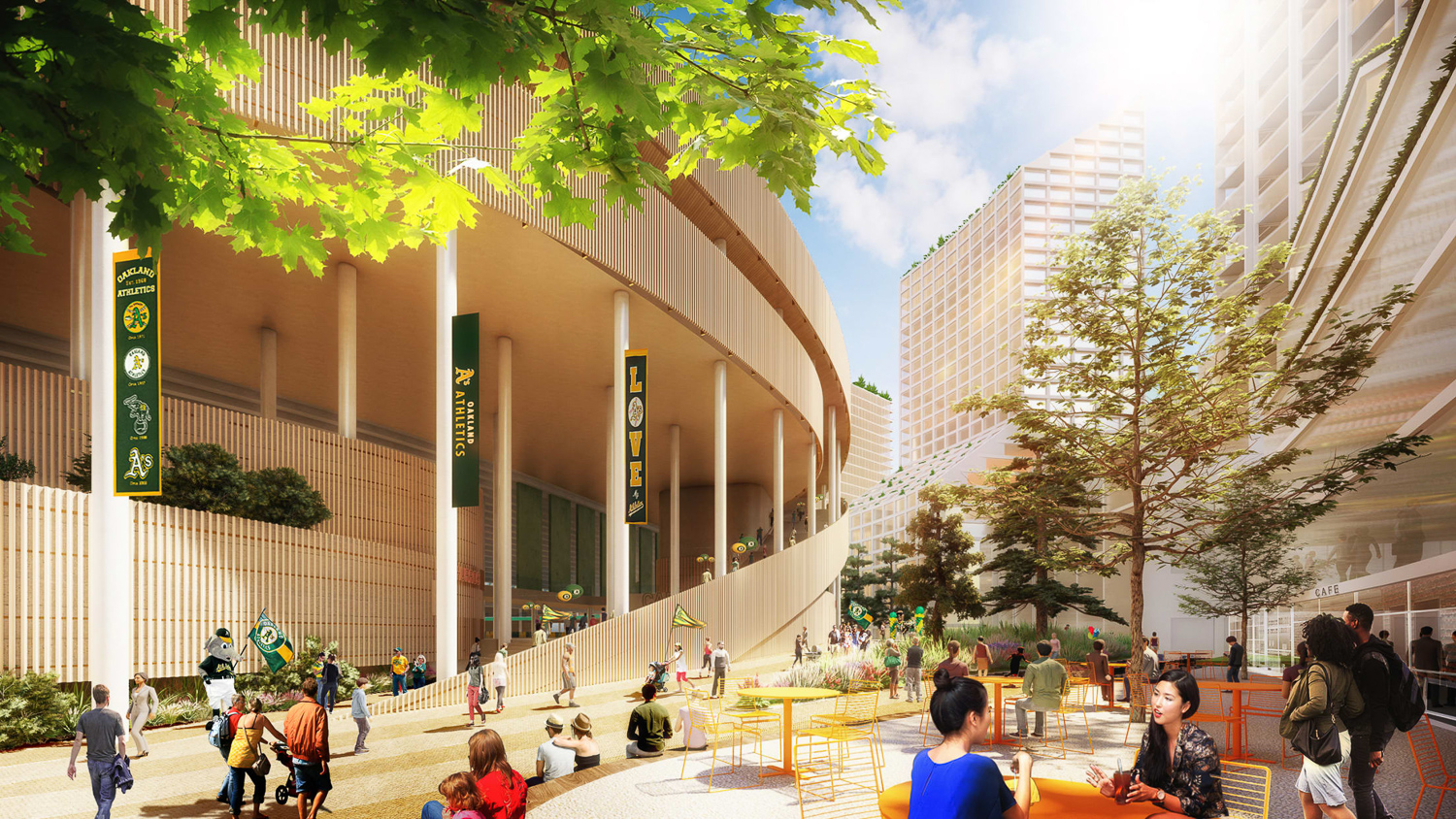 The 1.5 million square feet for offices will be flexible in design and may be used for commercial use, general administration and professional tenants, or even life sciences and research institutions. New civic amenities will further escalate the district’s intended magnetic appeal to host the general public. The buildings are surrounded by 18.3 acres of privately owned public open space. 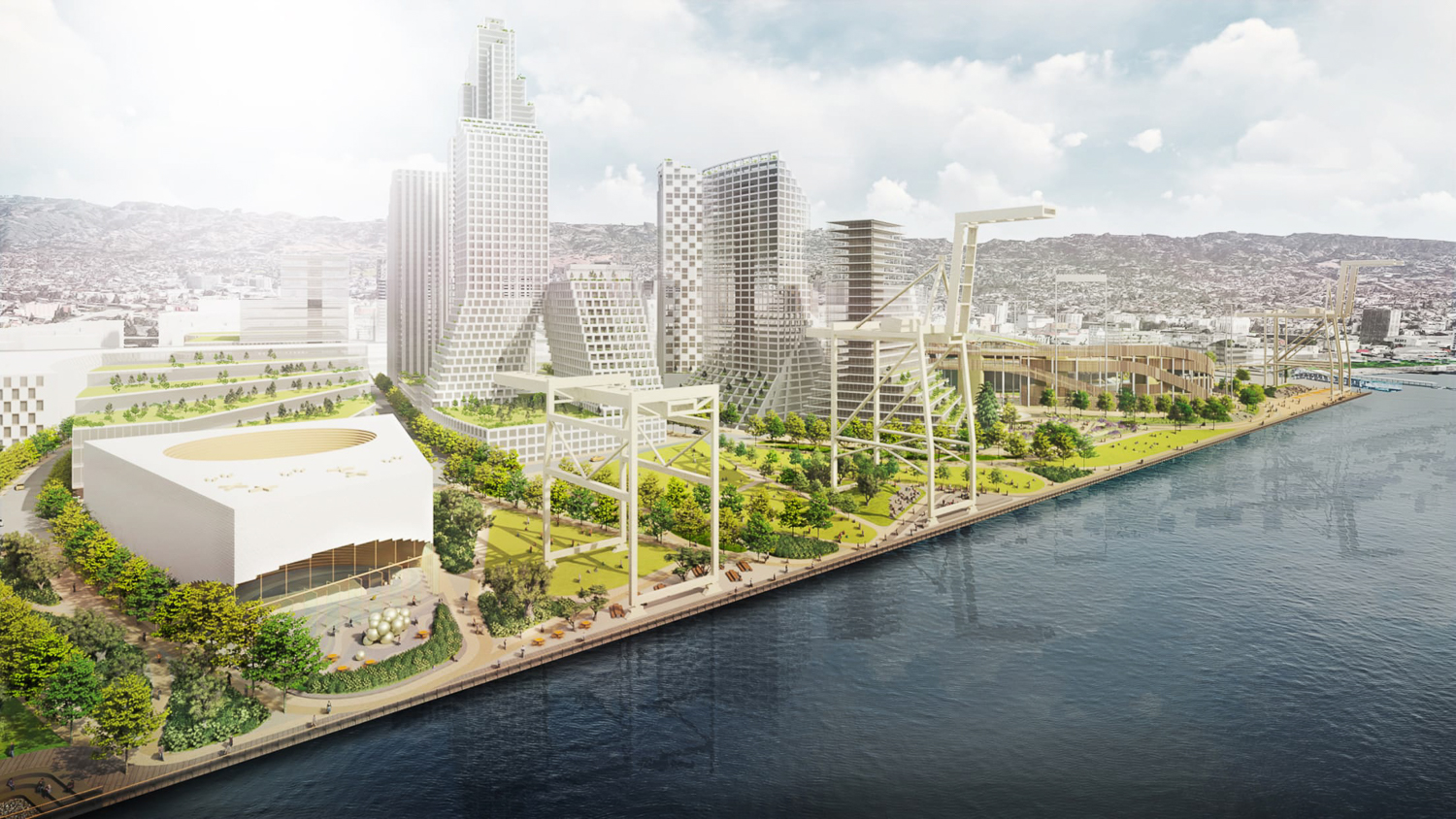 The design team includes the high-profile Bjarke Ingels Group, the prolific team at Gensler, and the landscape architect experts at James Corner Field Operations. Gensler will be the executive architect of the ball park, while Field Operations is working with BIG on both masterplanning and landscape architecture.  While BIG’s design for the stadium is highly detailed, the surrounding towers appear to be in a late conceptual stage. These concepts show BIG’s trademark approach for bold angles that treat giant towers like toy blocks. One small point of interest to highlight for our readers is that Building 3 has a striking resemblance to BIG’s The Spiral in Hudson Yards, New York. 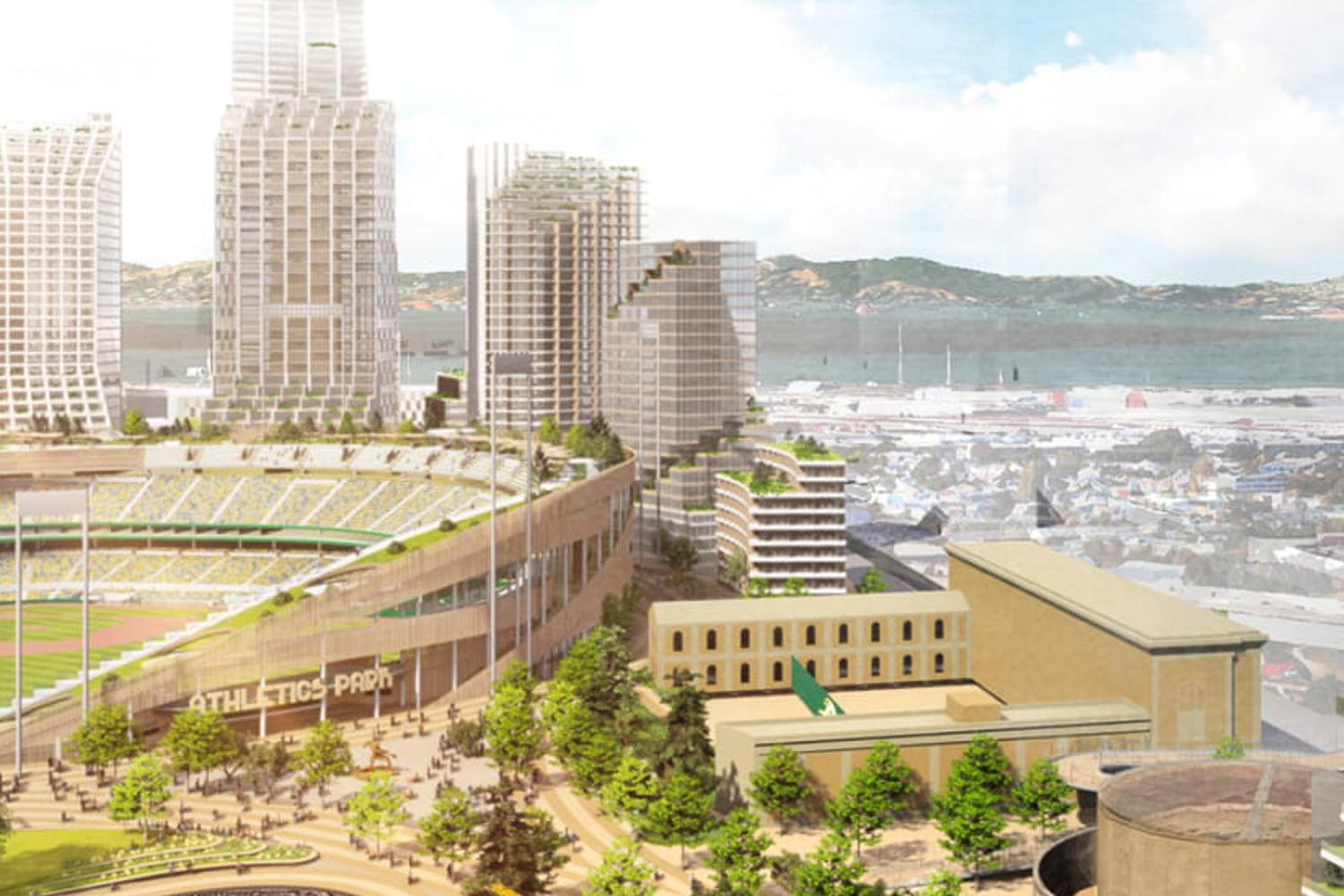 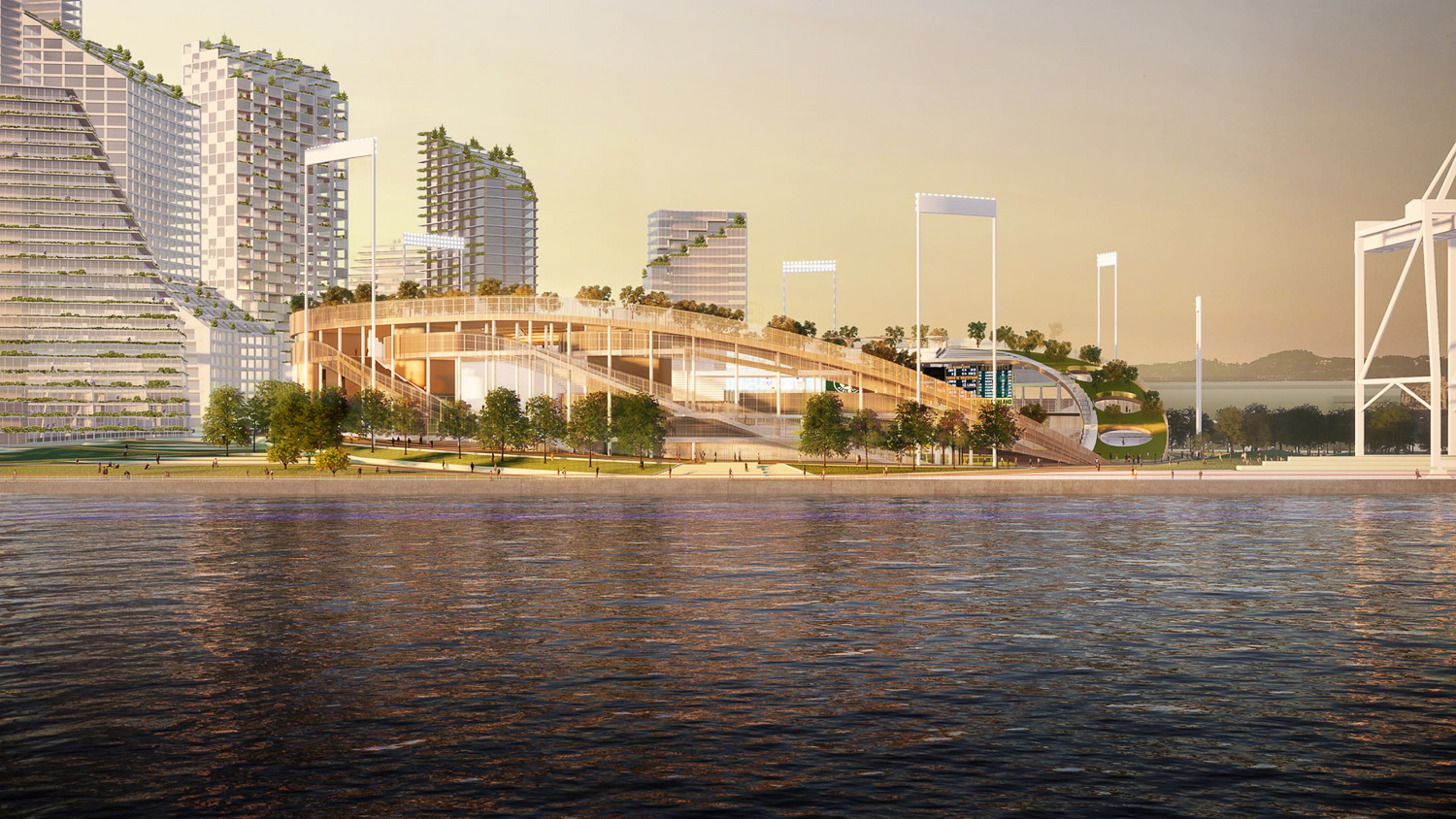 Two project variants have been included in the draft report. One is a mixed-use addition to the Peaker Power Plant station. Developers have said they could replace the jet fuel electric turbines with battery storage to make the new building possible while retaining the existing structure. 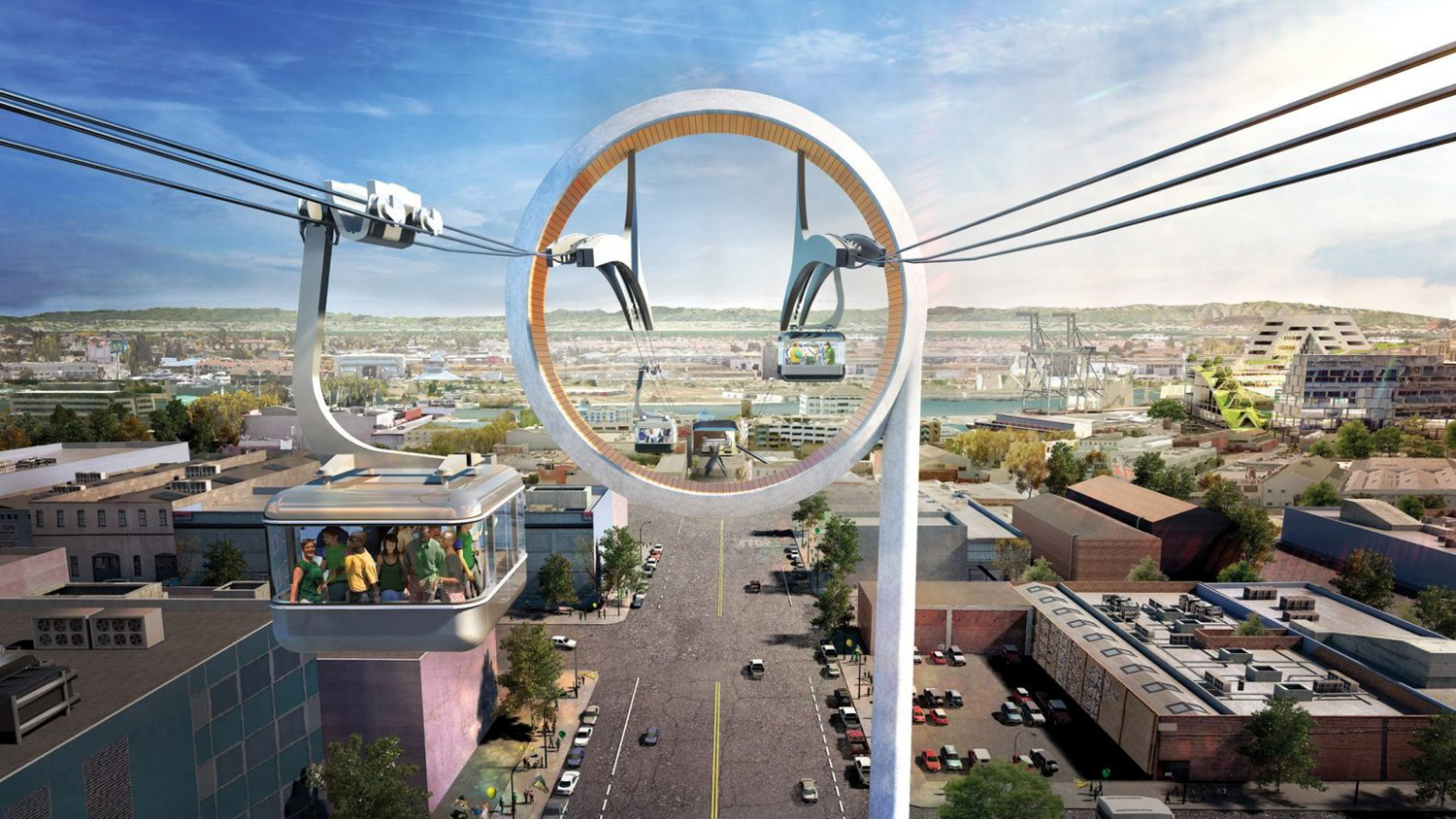 The second variant is for a gondola to connect 10th and Washington Streets by the downtown Oakland Marriott to Water and Washington Streets. The Gondola would carry passengers half a mile through the city. Both options may or may not be built depending on “cost, feasibility, and other factors.” 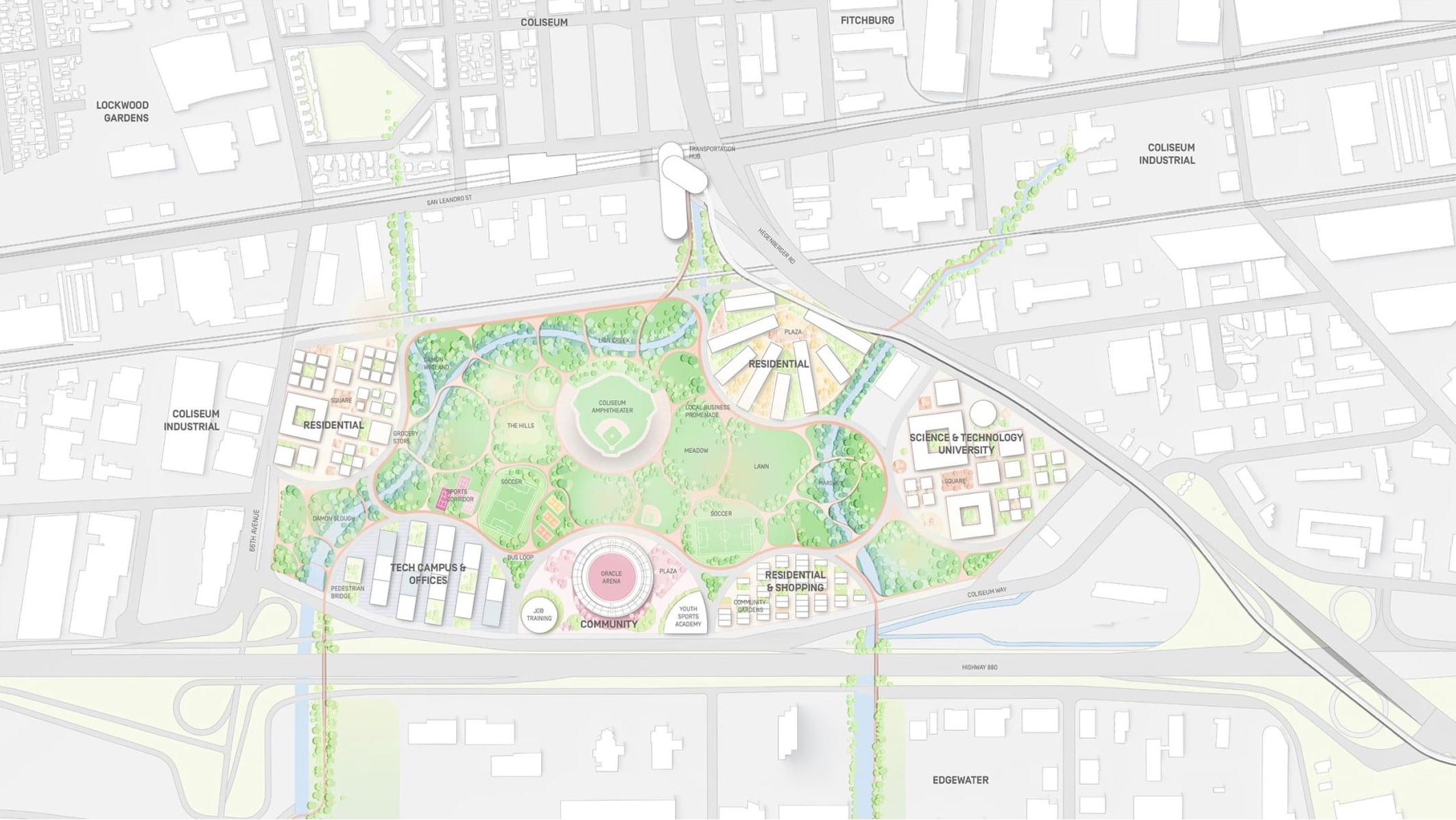 Illustrated plans for the existing Oakland Coliseum site via MLB

The new stadium will replace the Oakland A’s current home field at RingCentral Coliseum, located in the probably soon-to-be-rebranded Coliseum Industrial neighborhood. The team will be able to move in by the end of phase one. 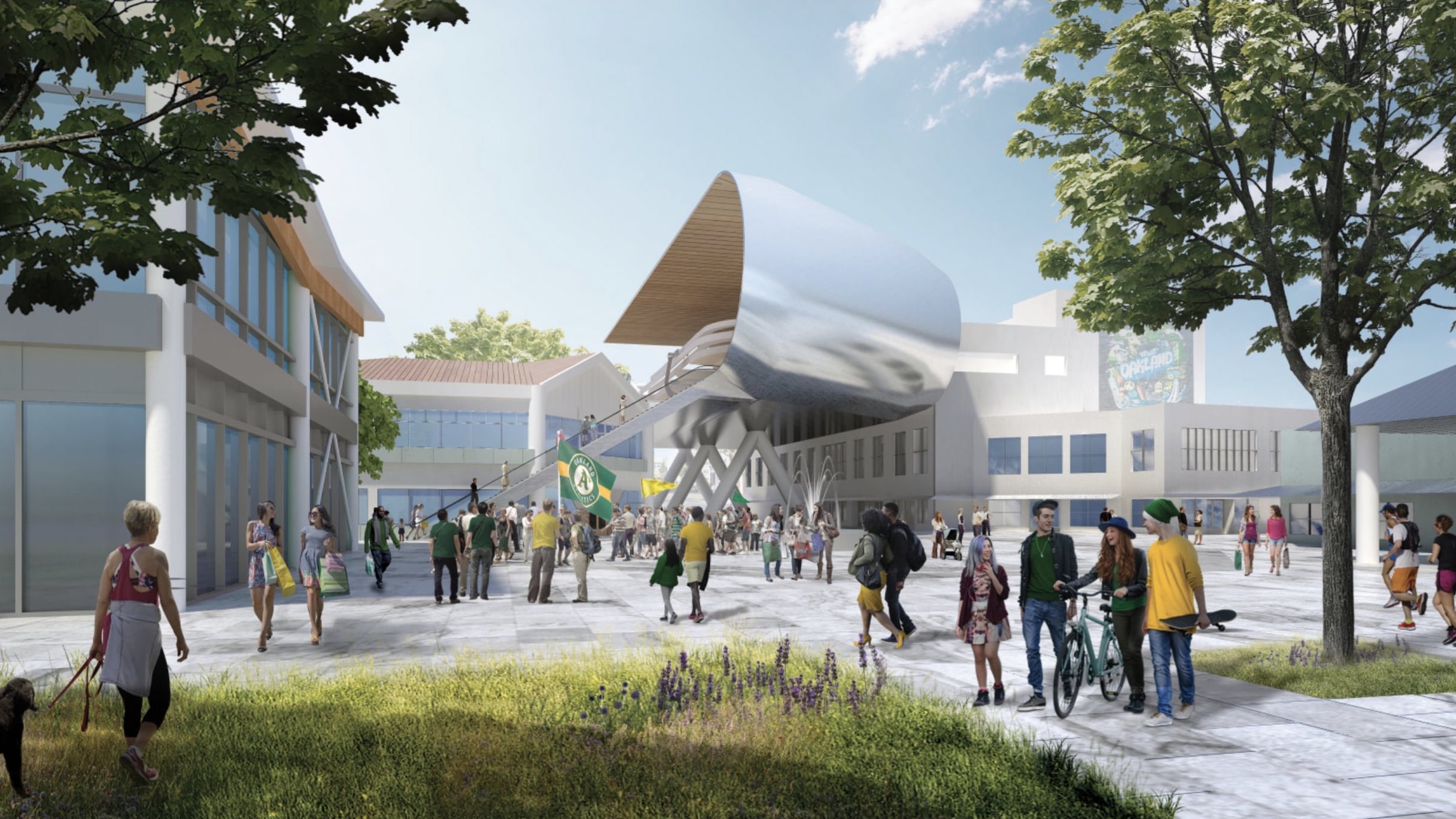 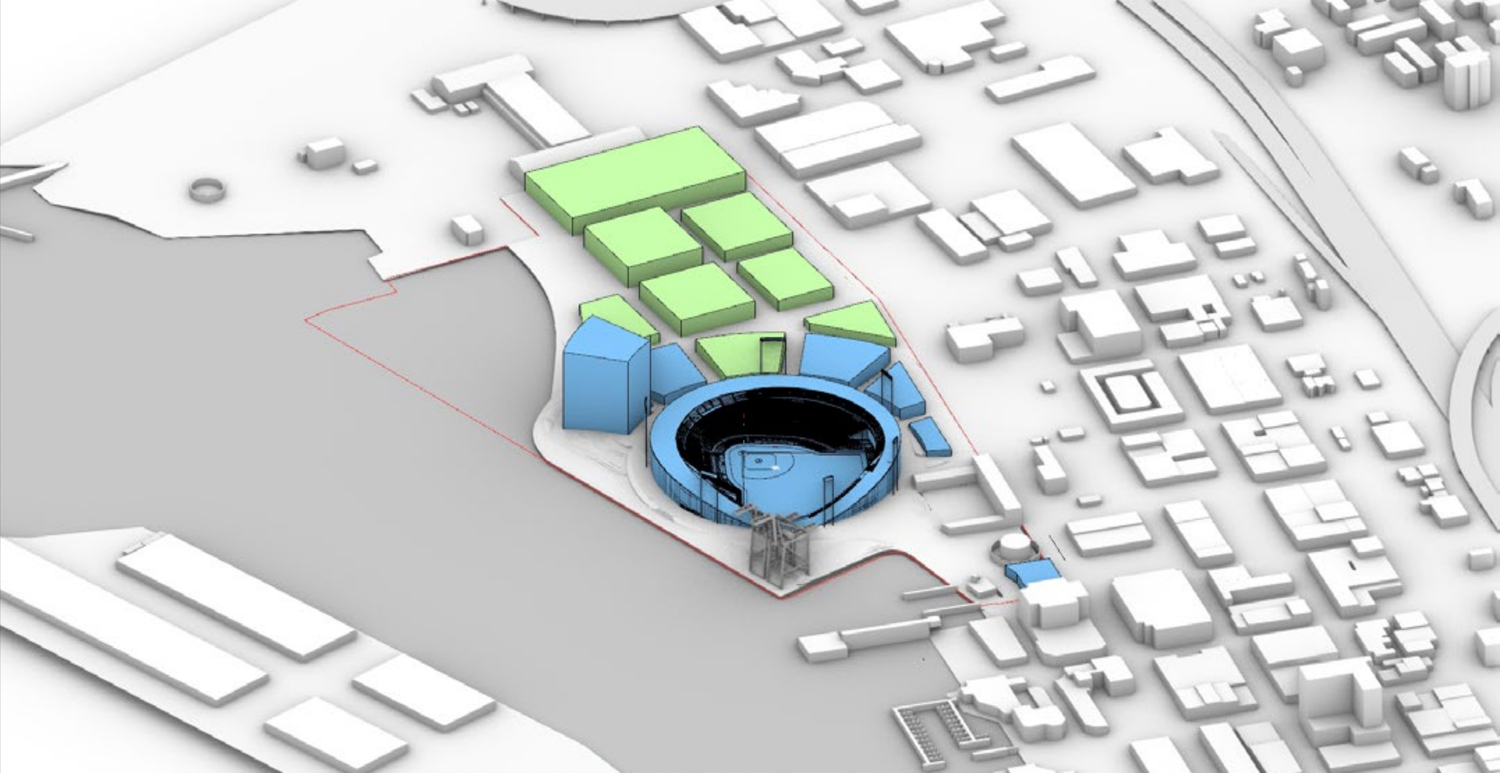 The EIR, i.e., Environmental Impact Report, does show a reduced project alternative. In the reduced option, the site would not see any skyscrapers built. Reductions would include pushing the 3,000-apartment draft to just 700 apartments with less than a quarter of the office and retail space. This reduced alternative does not change the size of the ballpark, performance venue, and open space. EIRs do not provide recommendations for approval or denial. 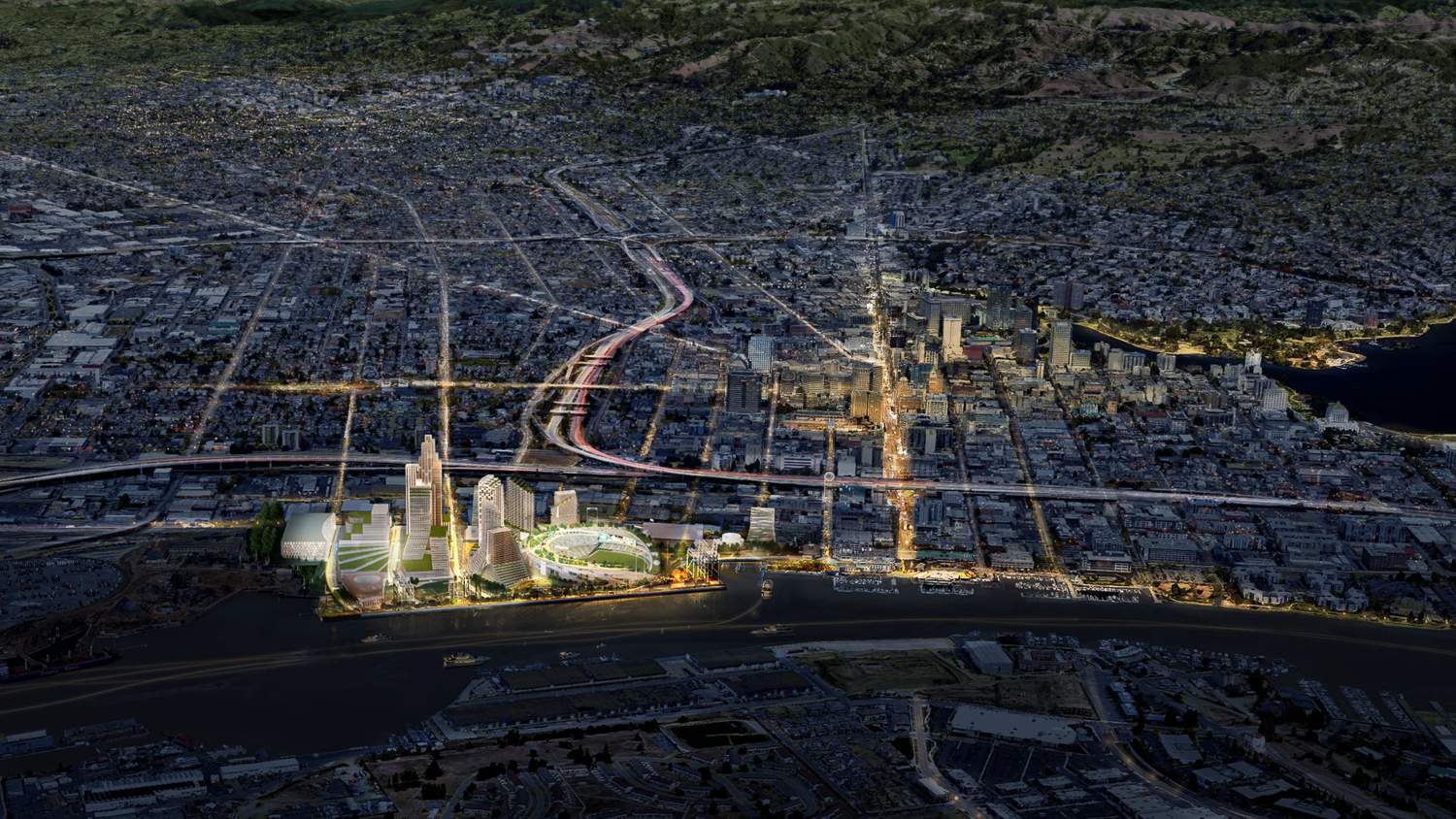 The Oakland Ball Park along the Oakland evening skyline, rendering by BKF Engineers

CORRECTION: The article has been updated to clarify that Field Operations is the landscape architect, and responsible for the master planning with BIG. Gensler is the executive architect for the ballpark.