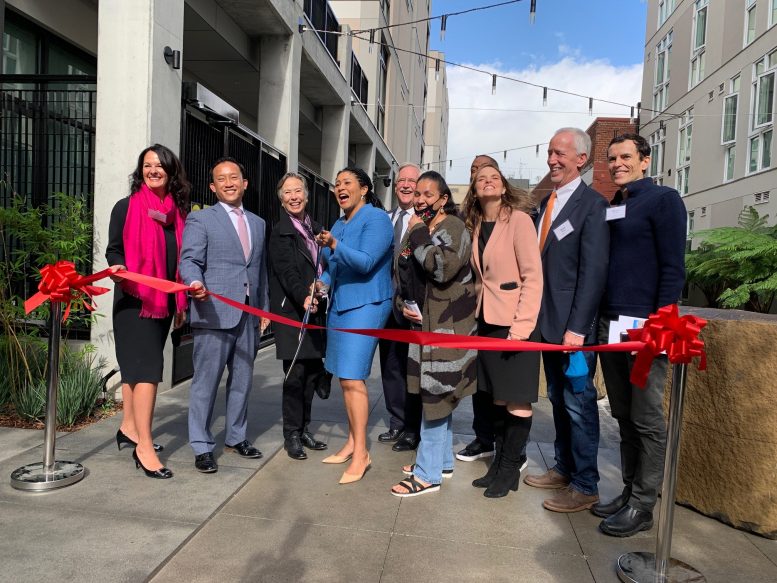 BRIDGE Housing and The John Stewart Company are the project developers. Leddy Maytum Stacy is responsible for the design concepts, and Cahill Contractors is also on the project team.

The new apartments at Broadway Cove are available to households with incomes ranging between 30-120% of the area’s median income. Broadway Cove is a six-story building that includes studios, one-bedroom, two-bedroom, and three-bedroom apartments. 735 Davis is a six-story building featuring studios and one-bedroom apartments. Over 30 of the family units are supported by project-based Section 8 vouchers and will house residents of the HOPE SF Potrero public housing site who have accepted the opportunity to relocate, while City-sponsored subsidy programs support 28 of the senior apartments located at 735 Davis.

Before the development of affordable housing, 88 Broadway served as a surface parking lot owned by the Port of San Francisco on a parcel that was formerly occupied by the Embarcadero Freeway. 735 Davis is a former San Francisco Public Works parking lot transferred to the Mayor’s Office of Housing and Community Development (MOHCD) through the City’s surplus land ordinance to make developable sites available for affordable housing on public lands.

Of the 129 units available through the affordable housing lottery, 51 homes are available to applicants with the Neighborhood Resident Housing Preference. The two developments collectively feature approximately 10,500 square feet of retail/commercial space targeted to neighborhood-serving uses, including a 55-slot mixed-income childcare center operated by the YMCA of San Francisco. There is also a 9,500 square-foot mid-block public walkway publicly accessible between the two sites, with landscaping and seating.

In October 2018, Mayor Breed announced a $1.5 million investment to ensure 735 Davis would be affordable to very low-income seniors through the Senior Operating Subsidy (SOS) program. The funding cuts rents in half for thirteen senior housing units, lowering the monthly rent for a one-bedroom apartment from $1,538 to $769. Additionally, fifteen units are supported by the Local Operating Subsidy Program (LOSP), part of Mayor Breed’s Homelessness Recovery Plan.

Major financing for Broadway Cove and 735 Davis includes a $50 million investment for building construction from MOHCD that enabled the $140 million (combined) projects to move forward. In addition to the City’s investment, Bank of America, the California Tax Credit Allocation Committee, and Barings Multifamily Capital LLC contributed to 88 Broadway, while the Federal Home Loan Bank of San Francisco contributed to 735 Davis.

Be the first to comment on "Broadway Cove and 735 Davis Celebrate Their Grand Opening In Embarcadero, San Francisco"