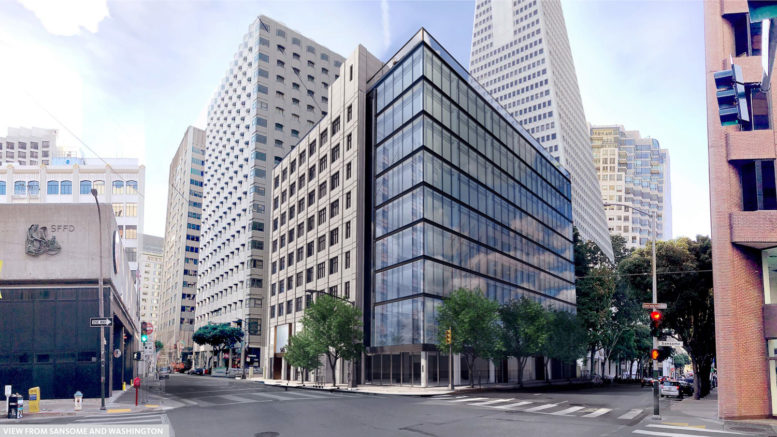 545 Sansome Street from Sansome and Washington, rendering by Gensler

Plans to expand the commercial office building at 545 Sansome Street in San Francisco’s Financial District that were first filed in early 2020 are still under review, with updates in late 2021. The application, started under the previous owner, Aegon, has continued after the $650 million bundle-sale of the property with 505 Sansome Street and the Transamerica Pyramid in February of 2020 to New York-based SHVO. This week, the developer enflamed tensions in the city by announcing it would not renew the lease for Sai’s Vietnamese Restaurant, which has operated from the property for 37 years. Now, SHVO promises to assist in searching for a new permanent home for Sai’s while city officials look to provide more stability for the family business. 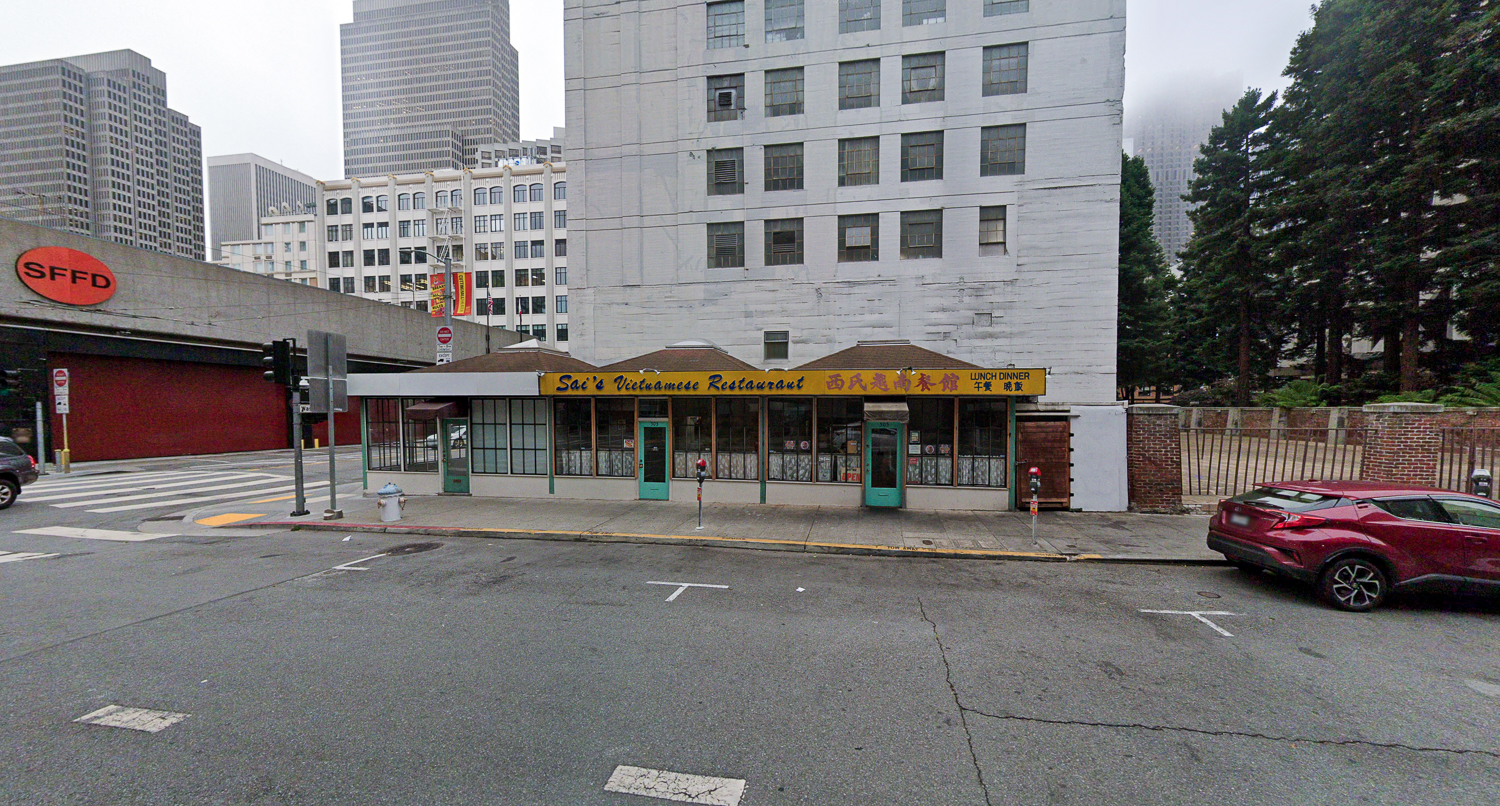 The news of possibly losing Sai’s Vietnamese Restaurant is part of a larger national trend for cities struggling to retain locally owned businesses, escalated over the last two years. Sai’s had been at the same location in 505 Washington Street since 1985. The property owner informed the family owners that the lease would not be renewed and was set to end on the last day of February.

KRON4 first reported the story on January 30th, then on January 31st by SFGATE. The restaurant owner, Inmy Chi, told SFGATE that the SHVO had in fact asked Chi about renewing the lease in early January. By the end of the month, SHVO informed the restaurant that they would not renew the lease at the end of the month. As Chi told SFGATE, “on Jan. 25, they answered and said they wanted us to leave. I still have to process this. I think it unethical.”

The issue has since been resolved, in part from an agreement between San Francisco Supervisor Aaron Peskin and the property owner’s lawyer. KTVU reported on Wednesday that Peskin told Chi, “he was able to work out a deal with the property owner’s lawyer so Chi will be able to operate her restaurant here until she finds a new location and that management will help her re-locate.

Speaking with the San Francisco Business Journal, a spokesperson for the property owner shared the following statement:

“We have been in touch with the family’s representatives to let them know that the restaurant can continue to operate while we provide resources to help find a new permanent space… We regret the miscommunication that occurred and remain committed to helping ensure a seamless transition.”

Once Sai’s Vietnamese Restaurant can move into a new location, plans will proceed for the development of 545 Sansome Street, which will include the demolition of the existing restaurant building, demolition of the adjacent below-grade garage at 517 Washington Street, and the adaptive reuse of the 1930-built office building at 545 Sansome Street, adding 49,999 square feet of new office space. 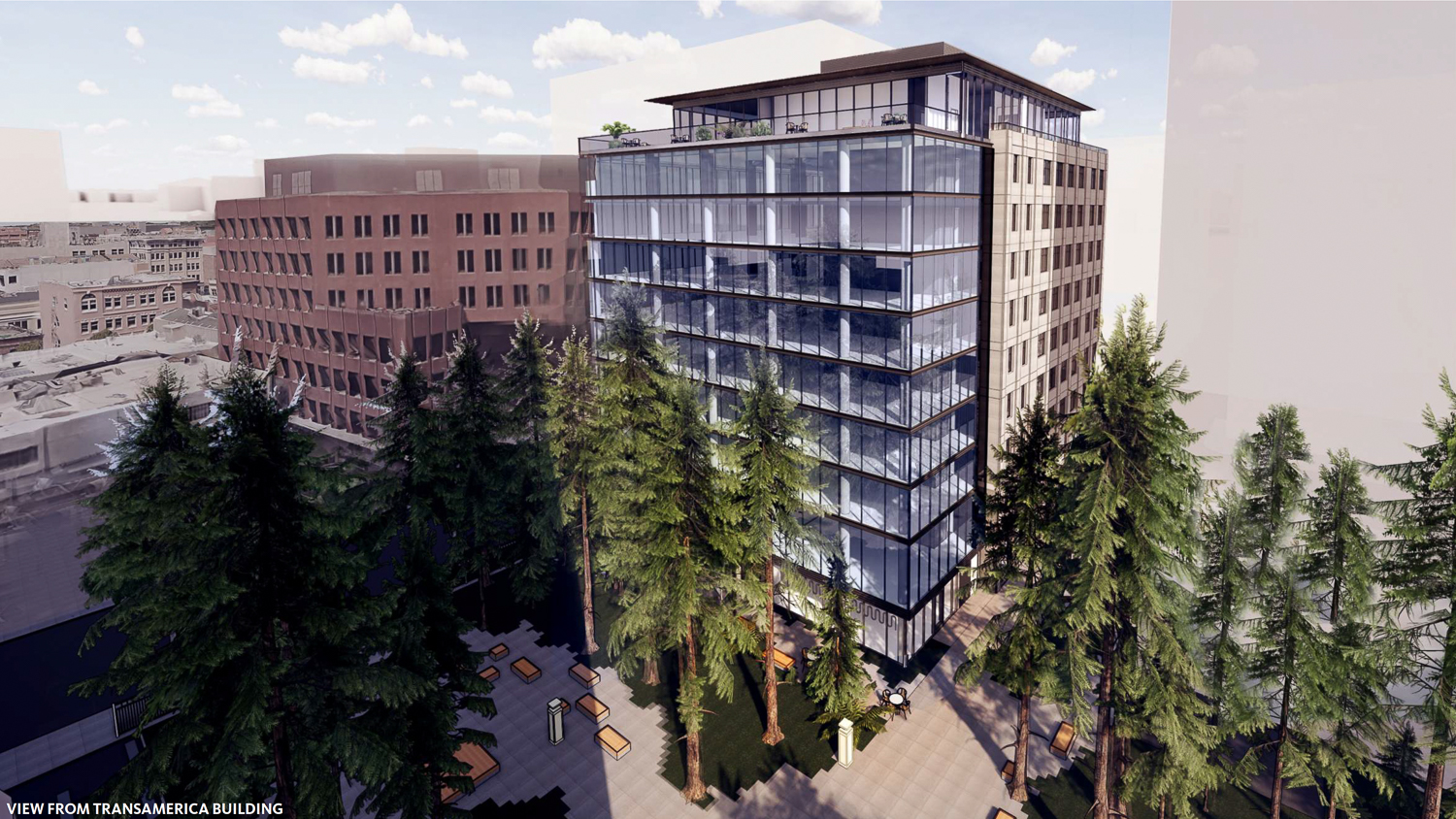 If built as proposed by AEGON, the building will expand horizontally, increasing the floor area from 55,759 square feet to 105,758 square feet. The new space will coincide with seismic upgrades and modernization to the nine-story structure. An extension to the Transamerica Pyramid’s Redwood Park would fulfill the development’s POPOS requirements.

Gensler is responsible for the design, which contrasts the 1930s-era masonry with curtainwall glass and metal panels. The extension will wrap around the north and west facades set back three feet from the masonry wall. 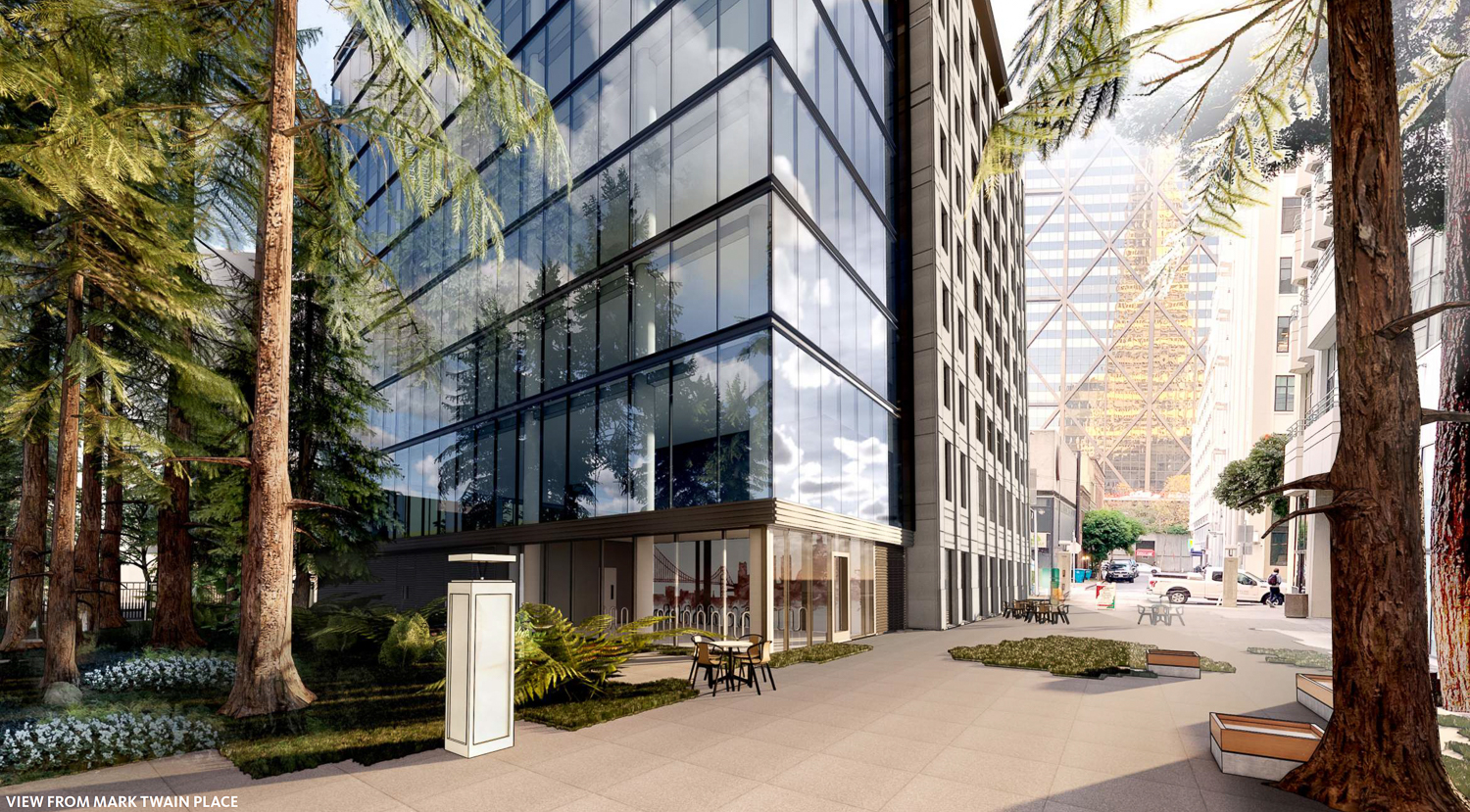 545 Sansome Street extension to the Redwood Park, rendering by Gensler 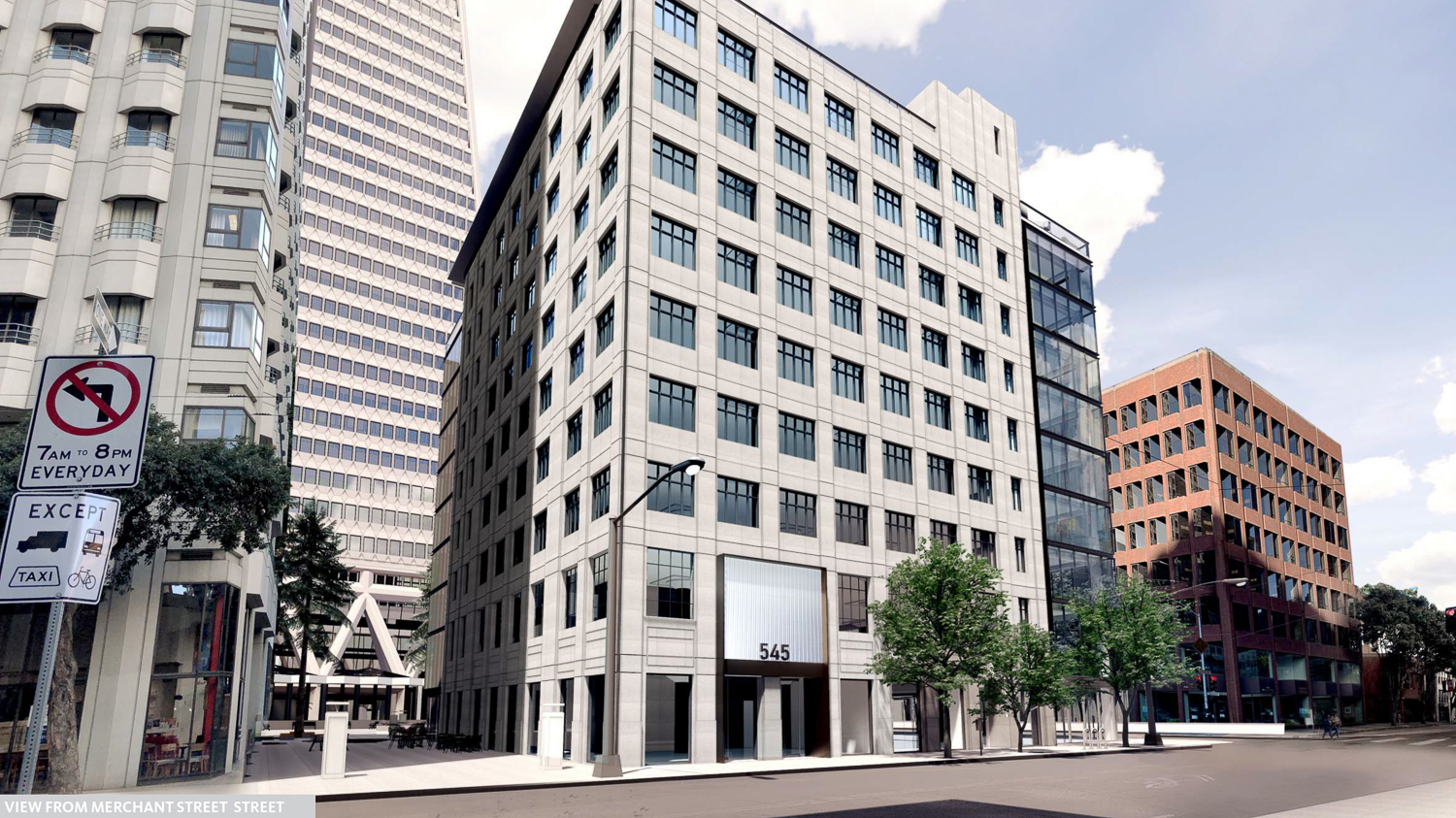 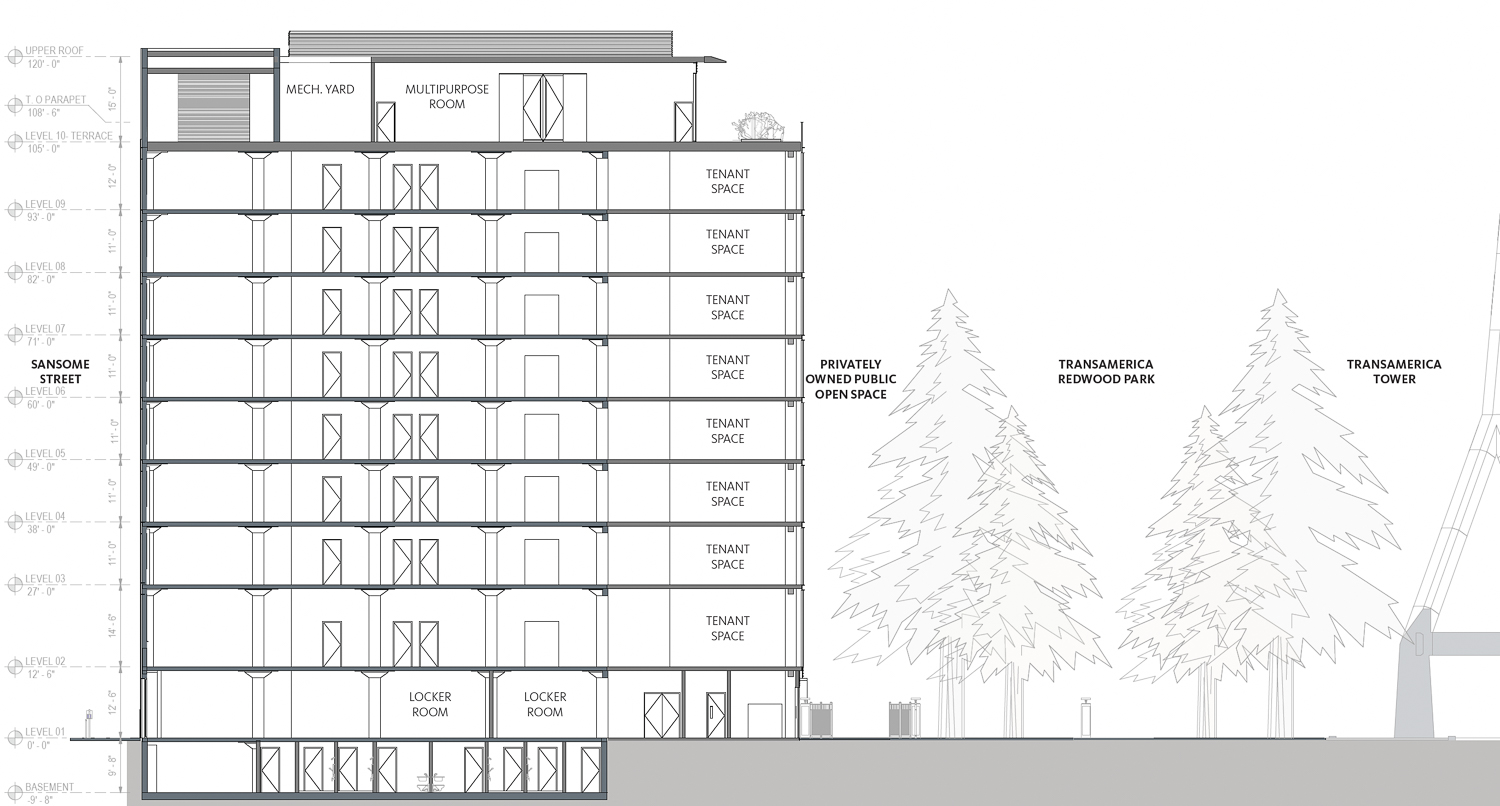 Researching the history of the site, another lesser-known application surfaced. AEGON had previously considered building a 390-foot tall residential tower on the site. First proposed in 2002, the structure would rise 38 stories with 248 homes, 6,700 square feet for retail, and 69,520 square feet for a four-story underground garage with a capacity for 230 vehicles. The plan includes a poorly-scanned design published in 2007 by Heller Manus Architects for a twisting project, rising from a square floor plan and transitioning into circular floor plates. 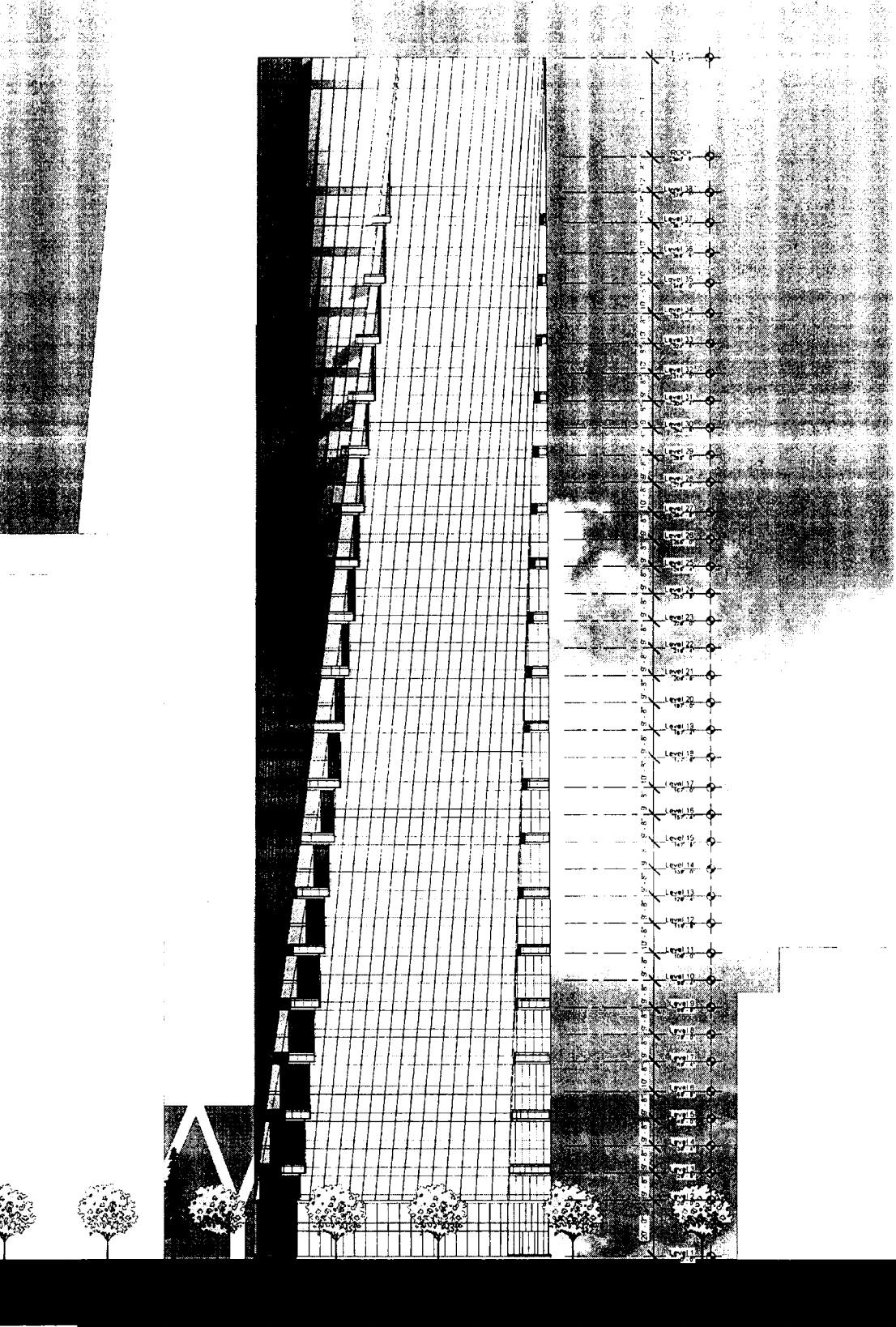 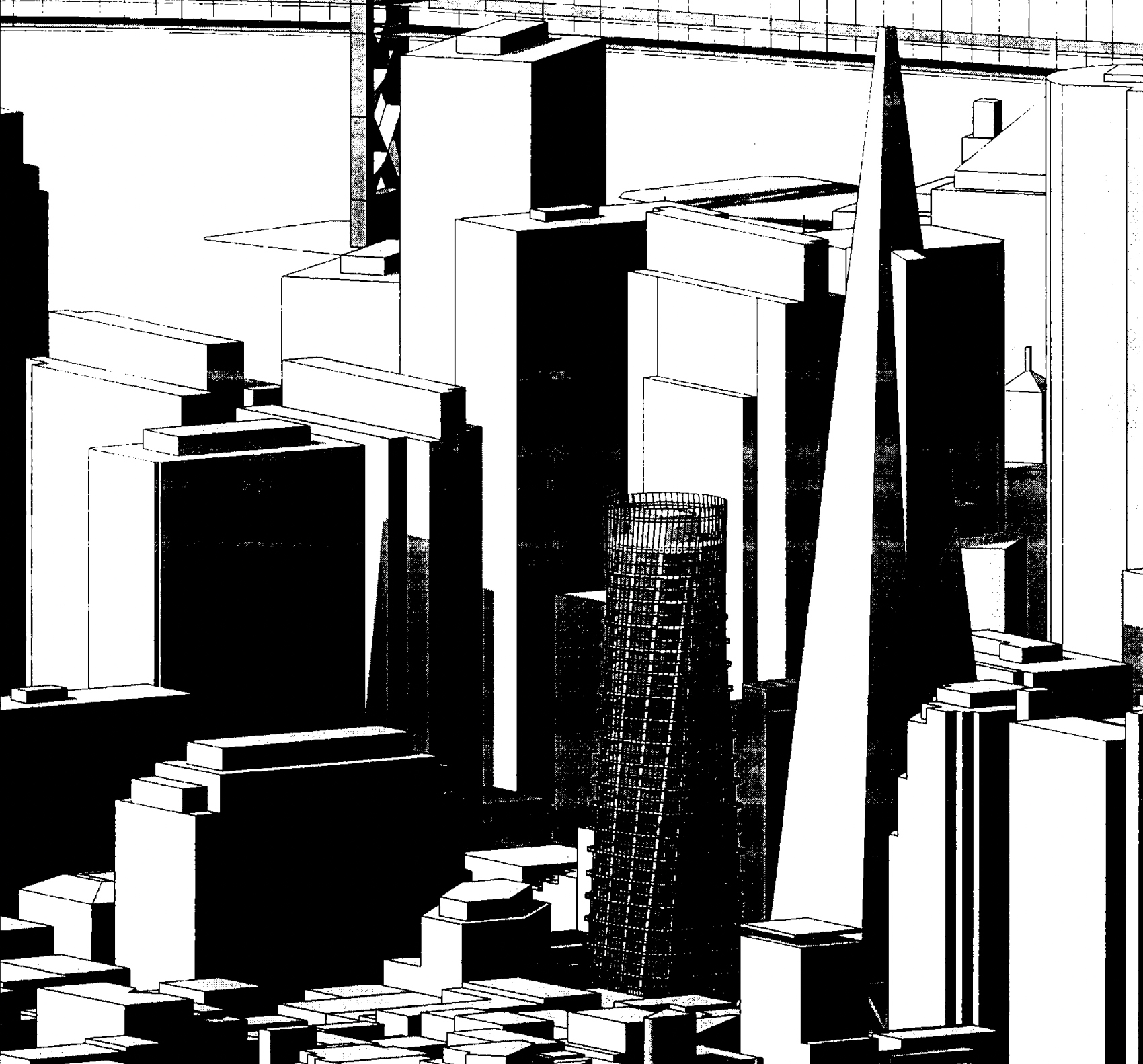 545 Sansome is across the street from 530 Sansome Street, a fire station where Related Companies plans to build a 19-story tower designed by Skidmore, Owings & Merrill.

City records show the building was sold in October of 2020 for $37 million. The sale, as previously stated, was part of the larger $650 million deal. SHVO partnered with Deutsche Bank and Bayerische Versorgungskammer for the investment. According to a project application, the proposed expansion will cost at least $27 million.