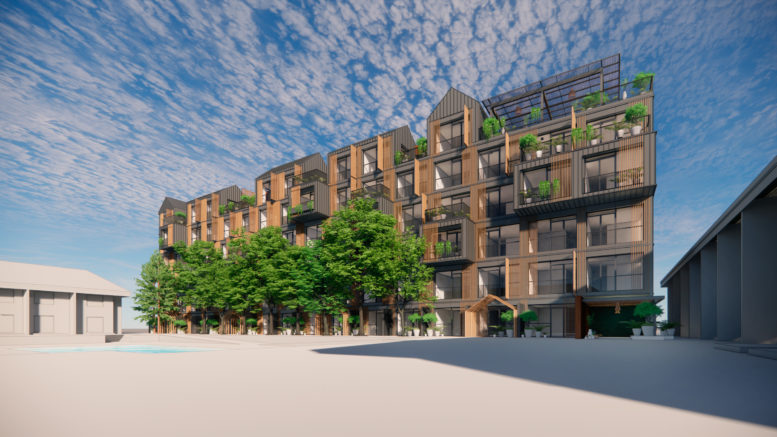 FullStack Modular has announced that they have been tapped to construct the Treehouse Hotel in Sunnyvale, Santa Clara County. Plans are expected to start soon, with the production of modules starting in February of next year. Recently, the Founder and President of FullStack Modular, Roger Krulak, sat down with YIMBY to discuss the building process.

The six-story hotel will yield around 86,000 square feet with 143 guest rooms. The project will fit within the Treehouse brand launched by Starwood Capital in June of 2019, with an emphasis on hotel guests looking for eco-focused design. The project will build on the existing Hotel Mathilda property. Crews have already started renovating the existing buildings, starting with interior and facade removal. Steinberg Hart is responsible for the design, placing the tower on what is currently surface parking.

“The FullStack Modular system is one of the most complete volumetric modular systems anywhere,” said Andy Nuessle, president of Synergy Modular. “From the facade, hallways, and elevator shafts to the stairwells and hotel room finishes, the hotel is 100% modular from the foundation to the rooftop.”

Completion of the Treehouse modular addition and renovation of the existing property is expected by late 2023 or early 2024. 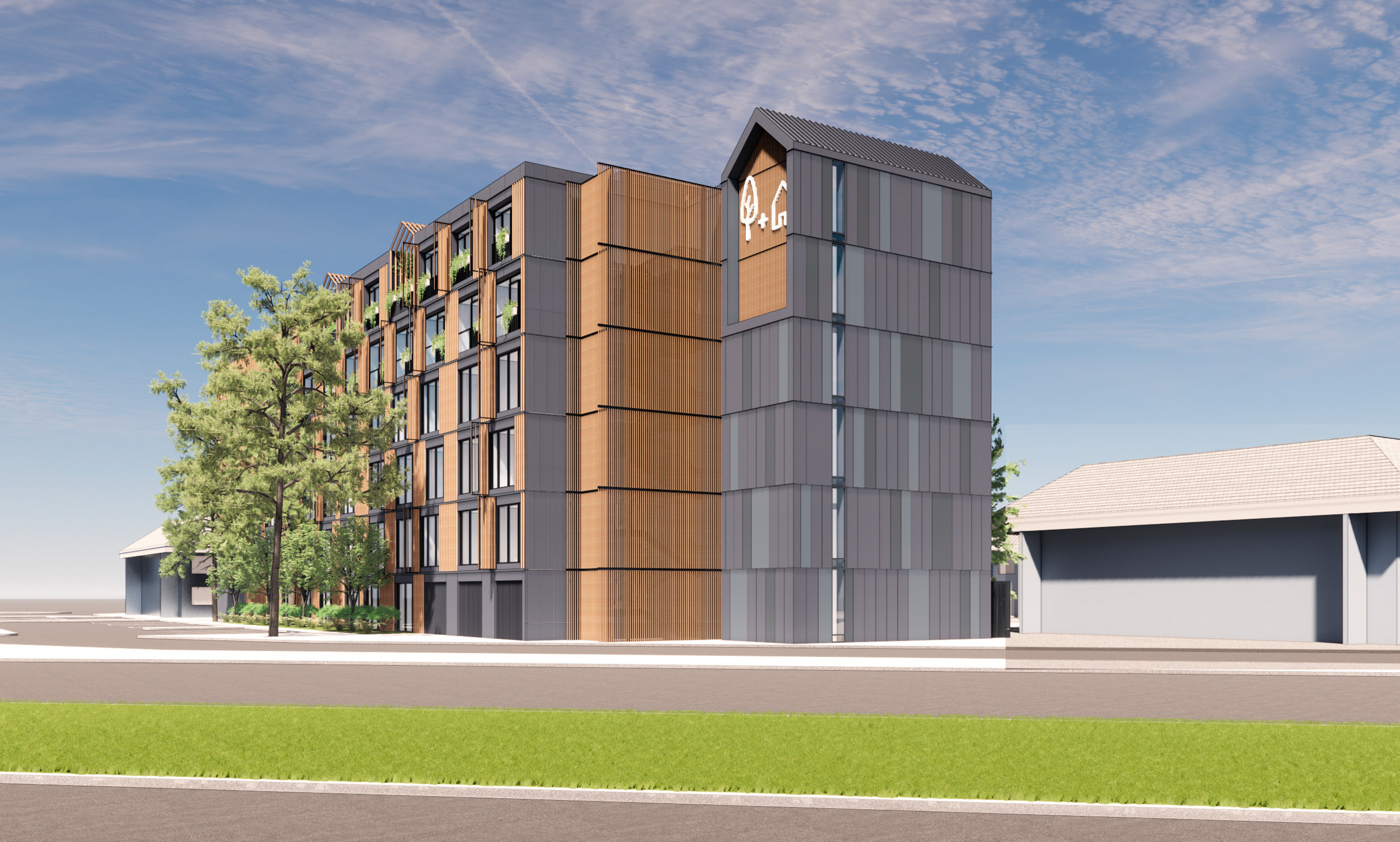 Treehouse Hotel view from the street, rendering by Steinberg Hart

FullStack Modular is a New York-based developer responsible for finishing the Brooklyn tower at 461 Dean Street, once the tallest modular tower in the world. The remaining text from the article is from our interview with Krulak.

Do you feel people are more receptive to modular construction in the current economic climate?

I don’t think there’s any question. It is growing exponentially, the question is at what order of magnitude. The question is, is it going to be ten times more than last year, fifty times, or a hundred times? There is finally a lot of traction. Driving that is with interest rates at 7-9%, saving 30-40% of [construction] time is a huge value proposition. With all of the safety regulations that are coming out in both California and New York etc., building safely has a huge value proposition. And neighborhood disruption. Nobody really wants concrete pouring going on for years next to your house. If you can just come in and stack a building, no scaffolding, and they’re your neighbors in a couple of weeks, that is a huge value proposition.

What are the advantages of modular construction?

It’s higher quality, it’s faster, and it’s completely cost-effective. It’s not always cheaper, but it’s definitely cost-effective. With FullStack solution, the facade comes on, modules are 85% finished in the factory… Everything but the foundation, roof, the elevator, and the finishing of all those connection points, that’s the advantage. 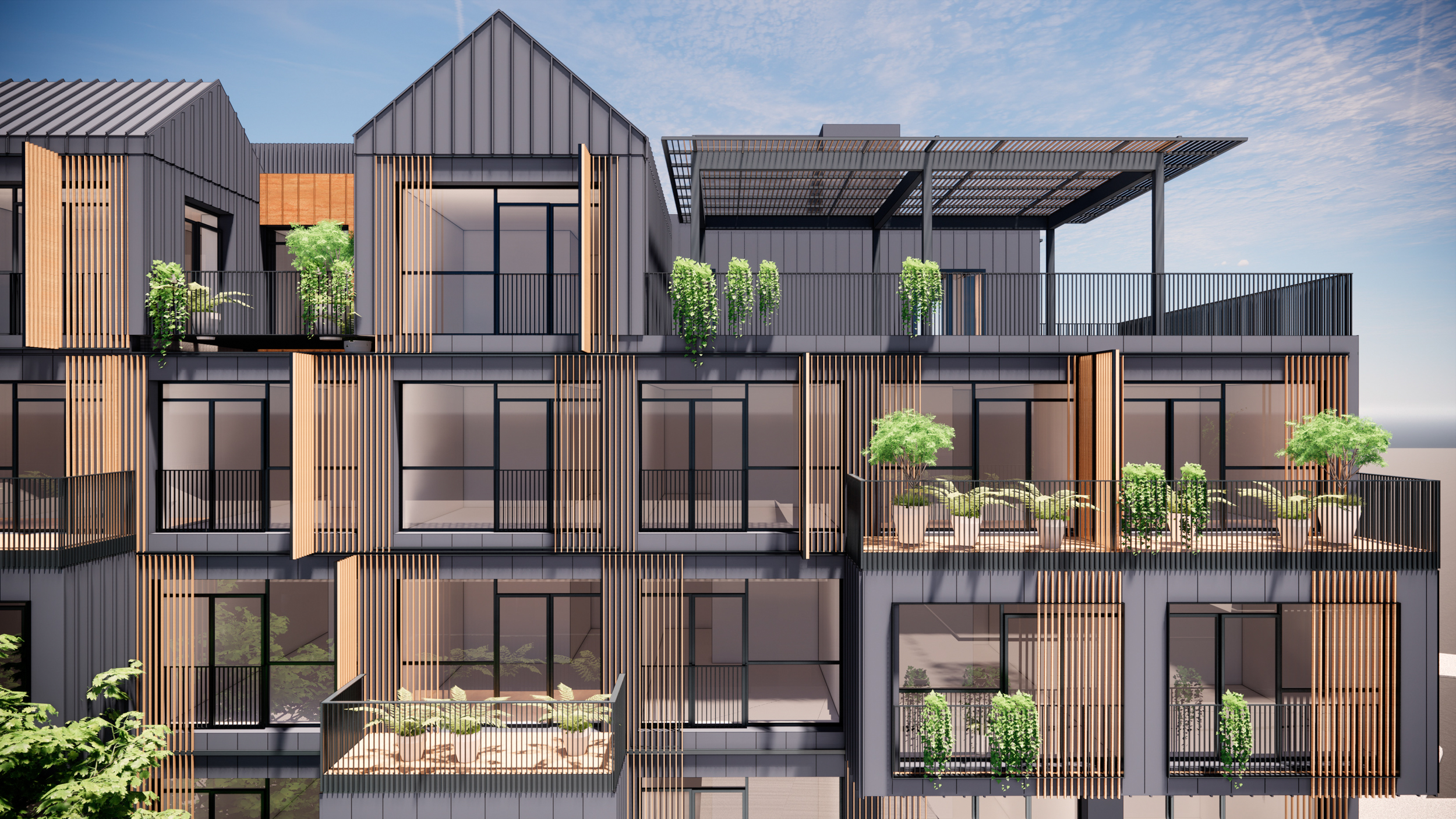 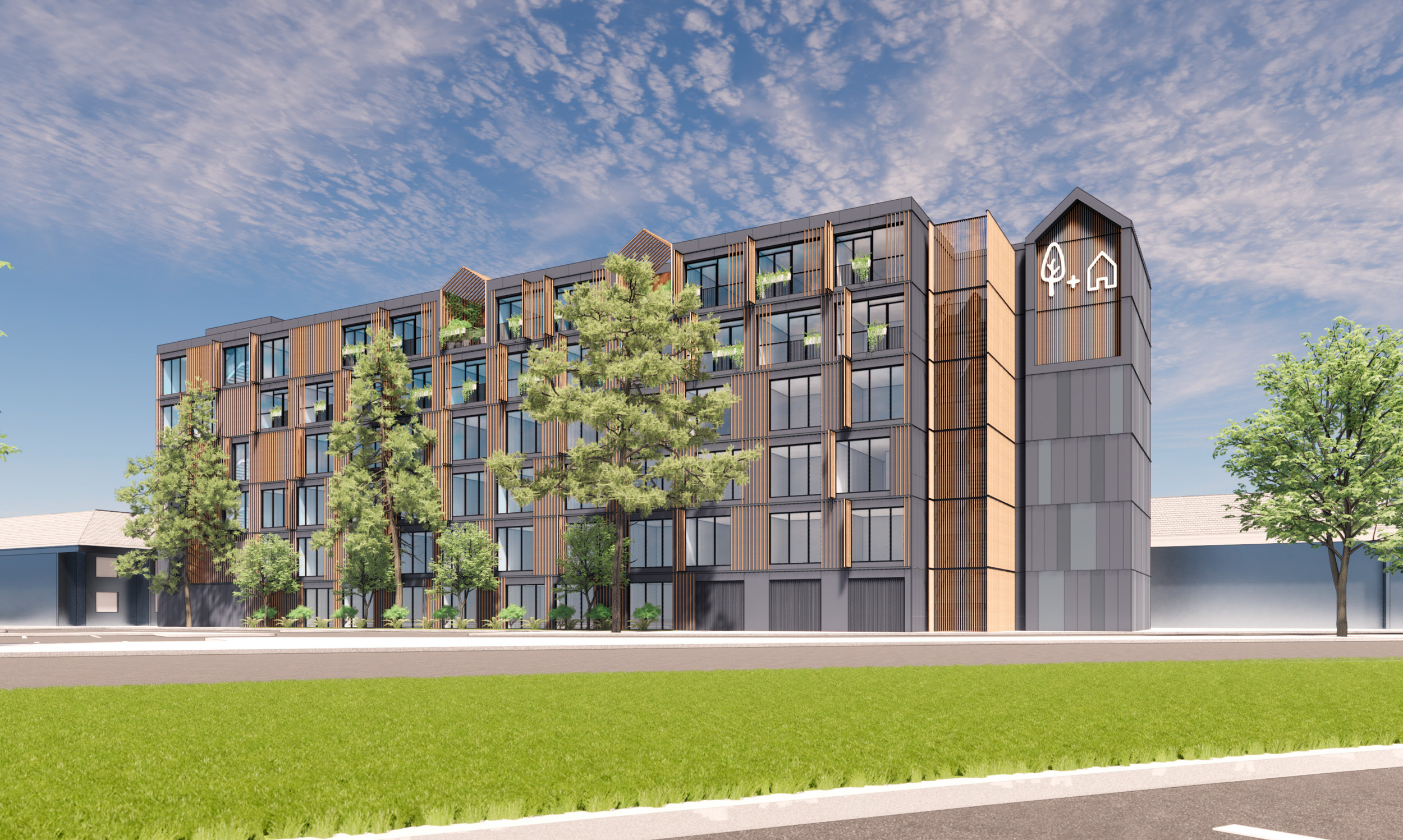 What are the limits of Modular Construction for housing?

The parameters are that you want to keep the module size, which is hopefully a portion of the unit size under 14 feet and between 25 to 32 feet deep. FullStack can stack up in a non-seismic area like New York, 65 stories, and in California, 30 stories or greater.

How has the property location shaped this hotel?

Could you describe the construction process?

We just need something to sit on. All we need is a platform, and then everything from that point forward is a mod or a component of the mod. On-site, you’re just bolting things together, and the facade is already installed, and it carries all of the seismic requirements as part of the system. All of the structural, mechanical, and electrical is distributed, so you’re literally just connecting pieces… and then you put a roof on and drop in an elevator. 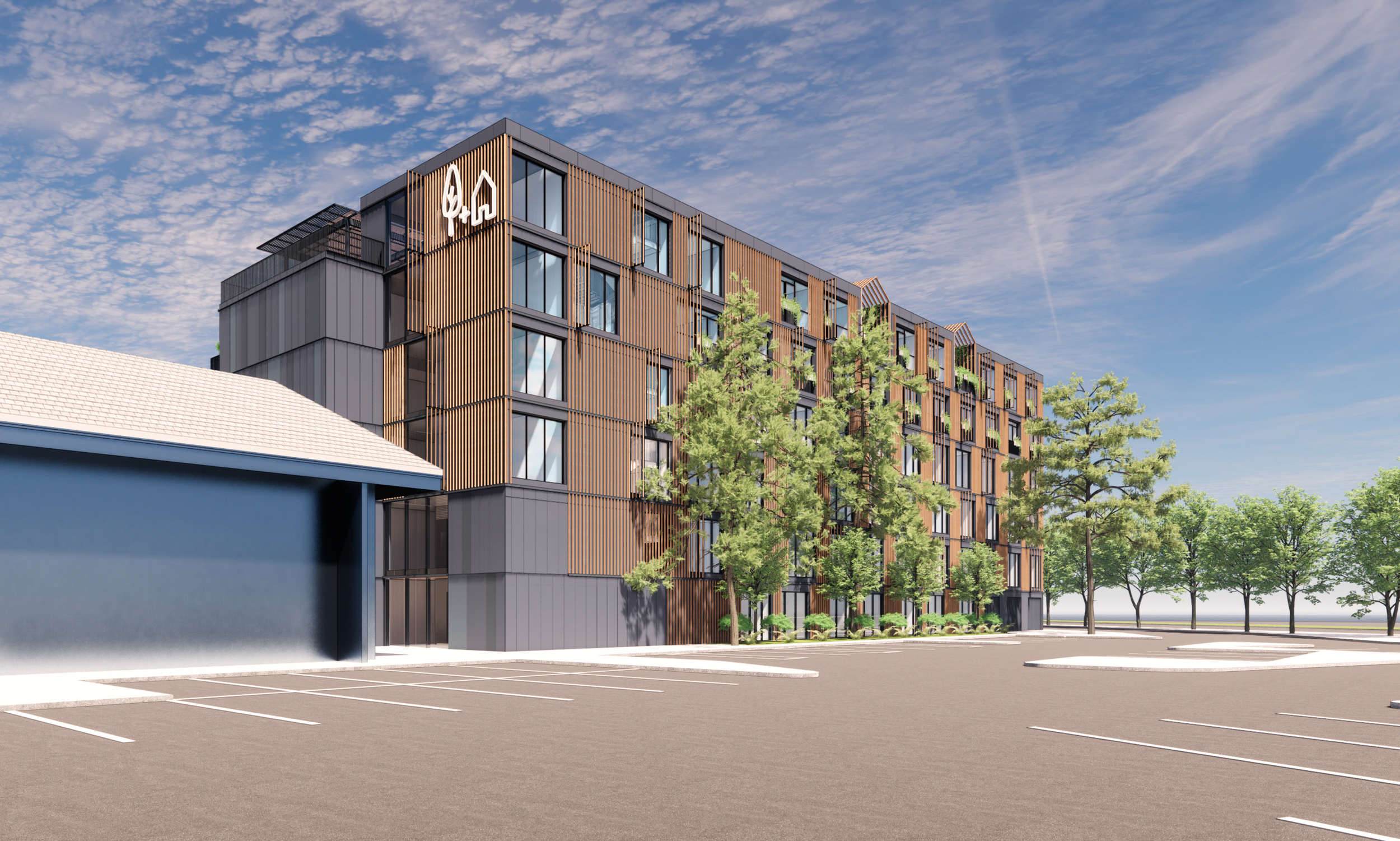 Yes. We have two factories, but for Sunnyvale, we’re building them in Portland, Oregon.

Once the modules are delivered on-site, how long will it take to complete the project?

Less than two months, probably. And this will be our first of many projects coming out of the Portland factory. This is also our first project on the West Coast.

We’re working with a developer on ten projects in Berkeley right now, and there are a whole bunch of others coming.

What are some of the common misconceptions about modular construction?

How does the carbon footprint compare with traditional construction methods?

Our carbon footprint is significantly less. We have almost no waste. Obviously, where we’re sourcing is important. There is a tight envelope with heating and air distribution systems. We are made out of reshaped steel which is, compared to concrete, significantly less. 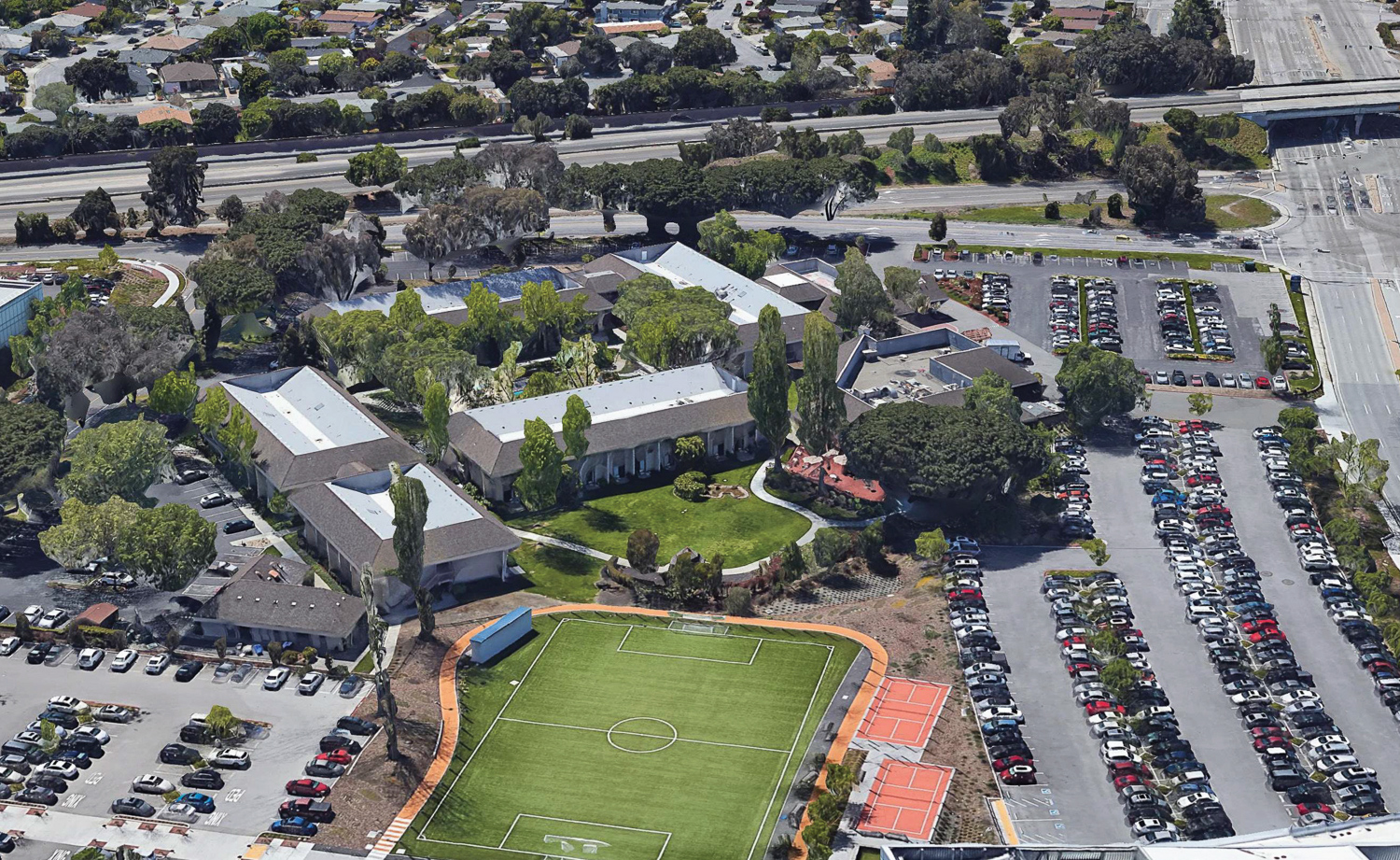