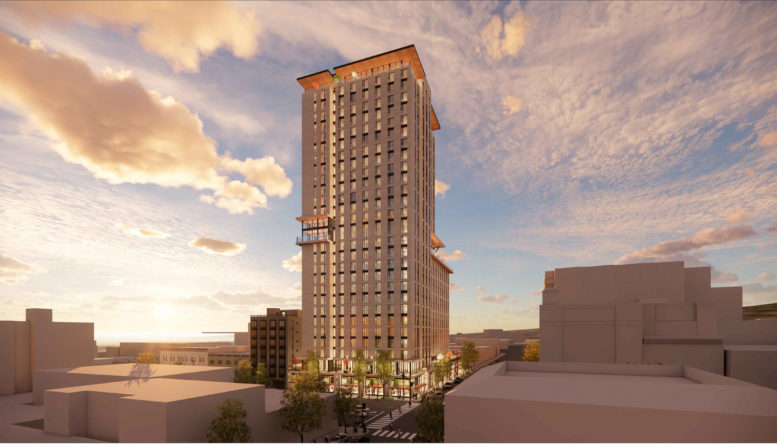 NX Ventures President & Founder Nathan George, has told YIMBY that the firm is “pushing full steam ahead on this site as a priority within our pipeline.” NX Ventures has proposed various transit-oriented projects across the city in collaboration with Trachtenberg Architects. 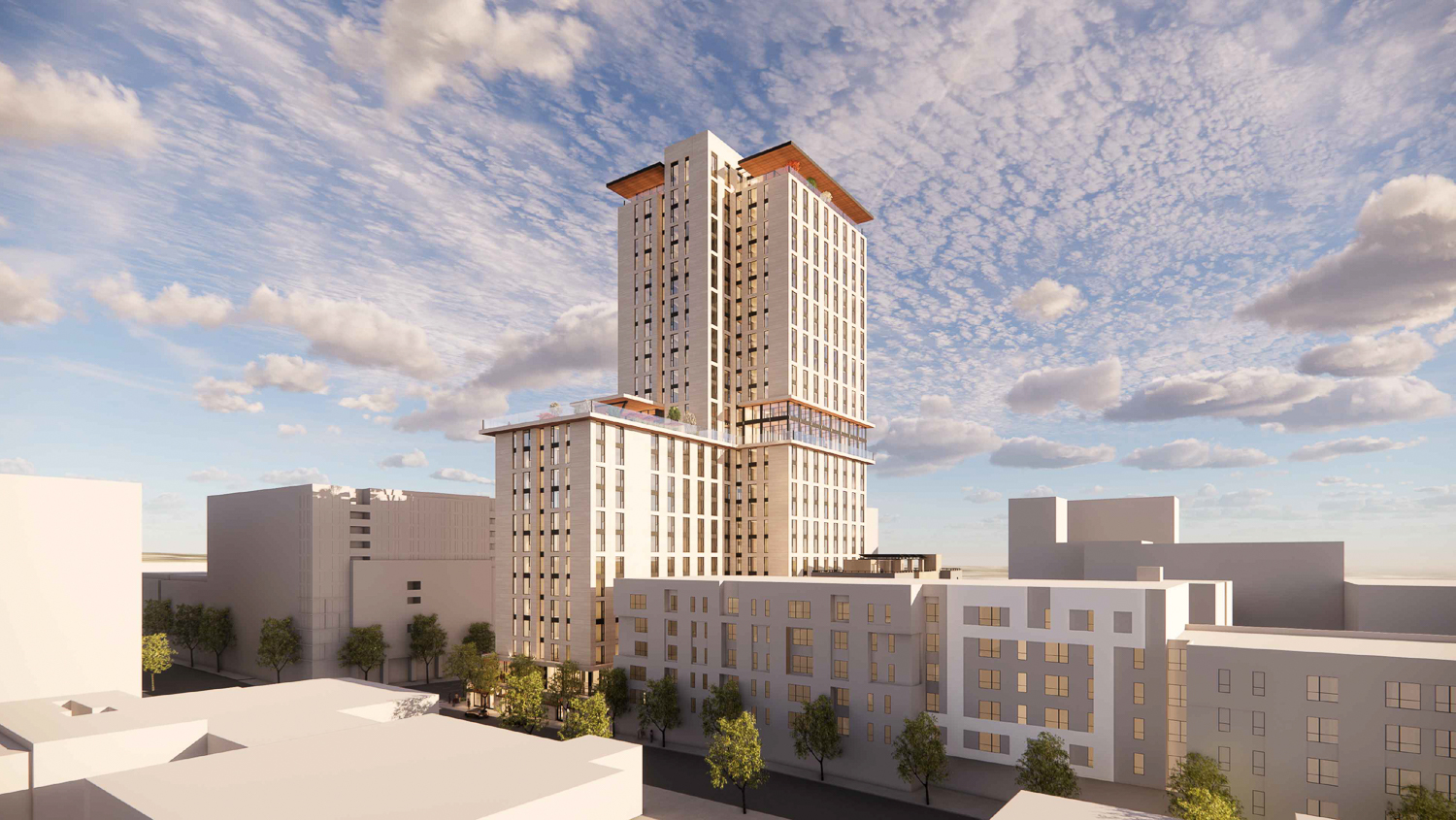 If built as proposed, 1998 Shattuck Avenue will become the tallest structure in Berkeley, even surpassing the 307-foot Sather Tower Campanile as the city’s tallest structure. The current tallest building in Berkeley is the 1971-built Chase Building, with a rooftop height of 186 feet. The next tallest is the 176-foot Wells Fargo Building from 1926, followed by the recently completed 168-foot Residence Inn By Marriott.

Two other proposals in the city’s pipeline are contending to be the tallest building in Berkeley: the recently-increased proposal for a 284-foot tower at 2128 Oxford Street and the 268-foot tall plans for 2190 Shattuck Avenue. The three proposals each occupy the only remaining tall building lots in the city’s current zoning map. 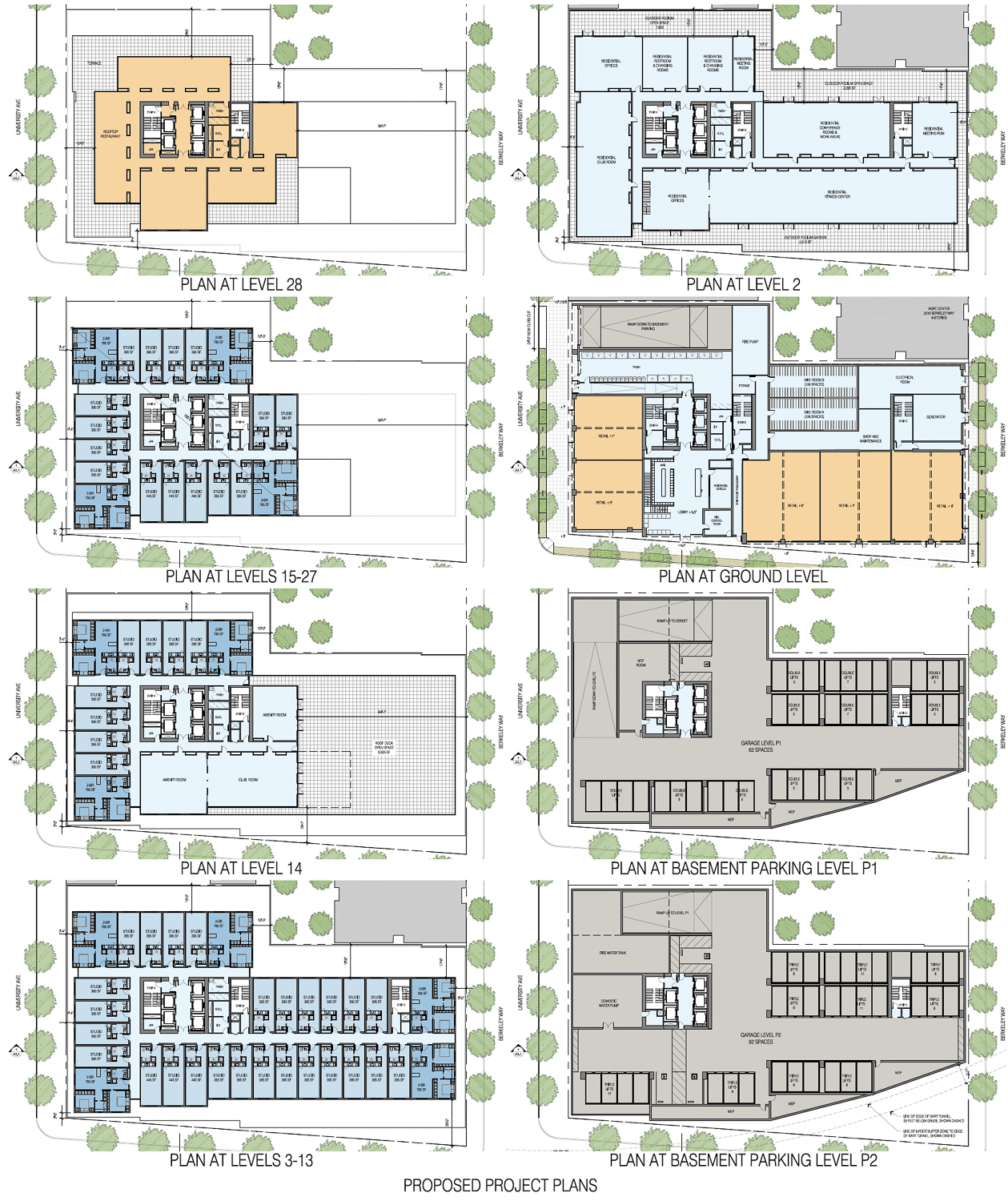 George emphasized that, for the new plans, “the biggest change is that we are in contract for the two additional parcels… That gives us additional density, so the restaurant is taller with a nice wrap-around deck and plenty of room for everything” With the expanded plans, 1998 Shattuck will extend across the site from University Avenue to Berkeley Way. Garage access will be featured along University, with five retail spaces extending from University across Shattuck. The flexible retail space could allow for as many as ten retail tenants.

The 317-foot tall structure will yield about 412,400 square feet with 396,030 square feet for housing and 16,370 square feet for commercial space, split between ground level and the rooftop. The project uses the State Density Bonus program, exceeding base zoning by 50%. Of the 599 units proposed, 60 will be deed restricted as affordable housing for prospective tenants earning less than half of the Area Median Income. Current plans include parking for 154 cars and 256 bicycles, though further access is expected on the ratio to meet future tenant and retail needs.

The increased proposal for 1998 Shattuck now includes two additional residential floors, a double-height ground level, and 14-floor ceilings for the amenity spaces on floors two and 14, thus raising the rooftop by 40 feet. Speaking on the phone with YIMBY, George disclosed that the firm is considering opening the amenities at 1998 Shattuck as a club-accessible space for a program open to residents at other NX Venture projects across Berkeley. 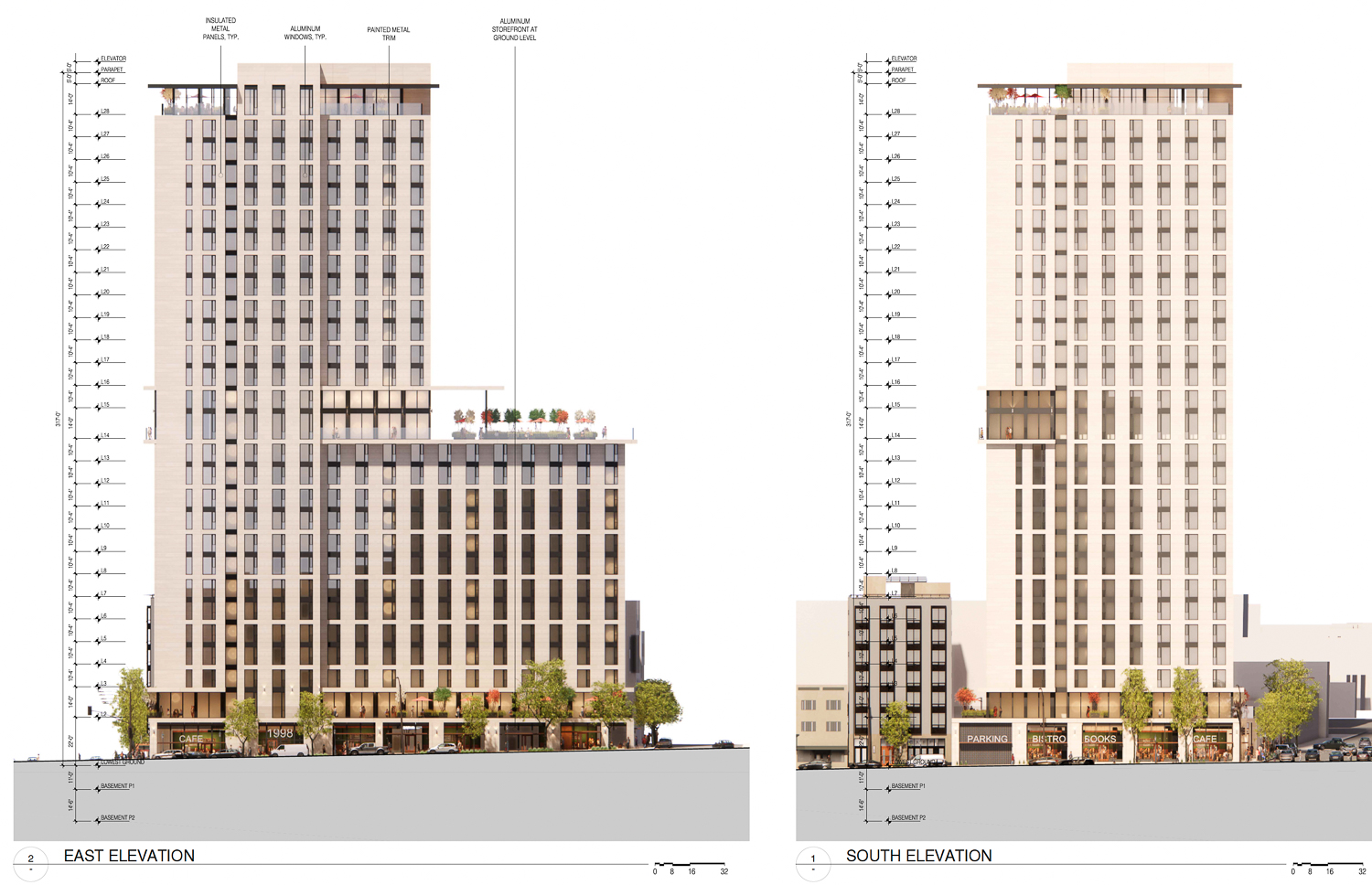 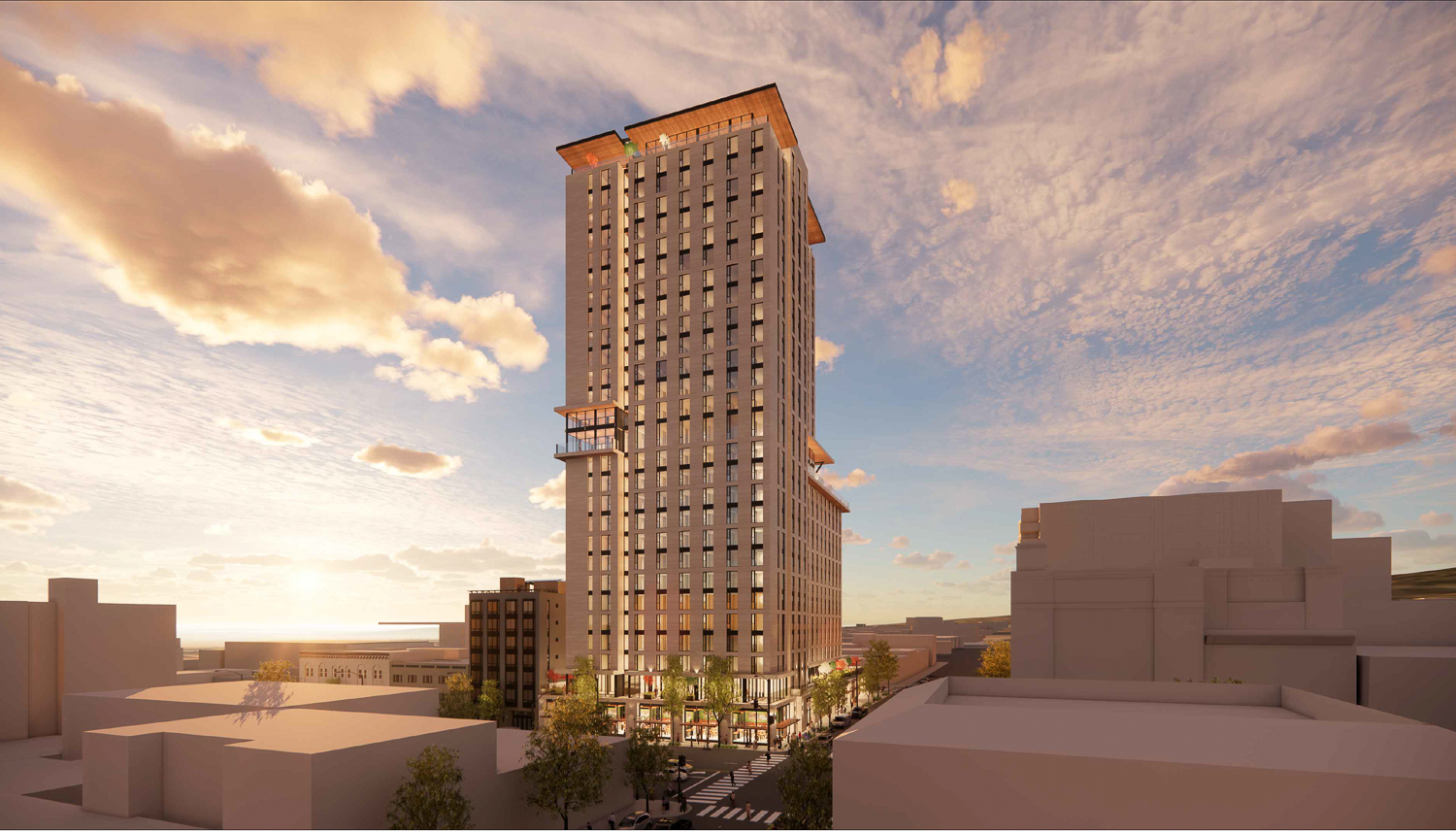 A rooftop restaurant will cap the tower with panoramic views across the East Bay. George explained that “we’re thinking of the restaurant as being a destination place for bringing people from all over the East Bay.” Basement parking will be included for restaurant customers and staff. By creating a regional attraction, NX Ventures hopes to have “spillover effects for the rest of Downtown,” attracting more visitors and increasing the block’s foot traffic and economic activity.

Future residents will be just a block away from the Downtown Berkeley BART Station and one block from UC Berkeley. While George sees it as inevitable that some college students will look at the apartments, the project is expected to appeal mainly to young professionals in the region. George said, “we see this as a destination location for people who want to work in Oakland and San Francisco and live in Berkeley.”

Trachtenberg Architects is responsible for the design. Renderings show the building wrapped with an off-white metal cladding punctuated by floor-to-ceiling windows. The covered outdoor decks will create focal points on the 14th floor and rooftop. Along the base, the retail will be wrapped with double-height curtain wall glass. 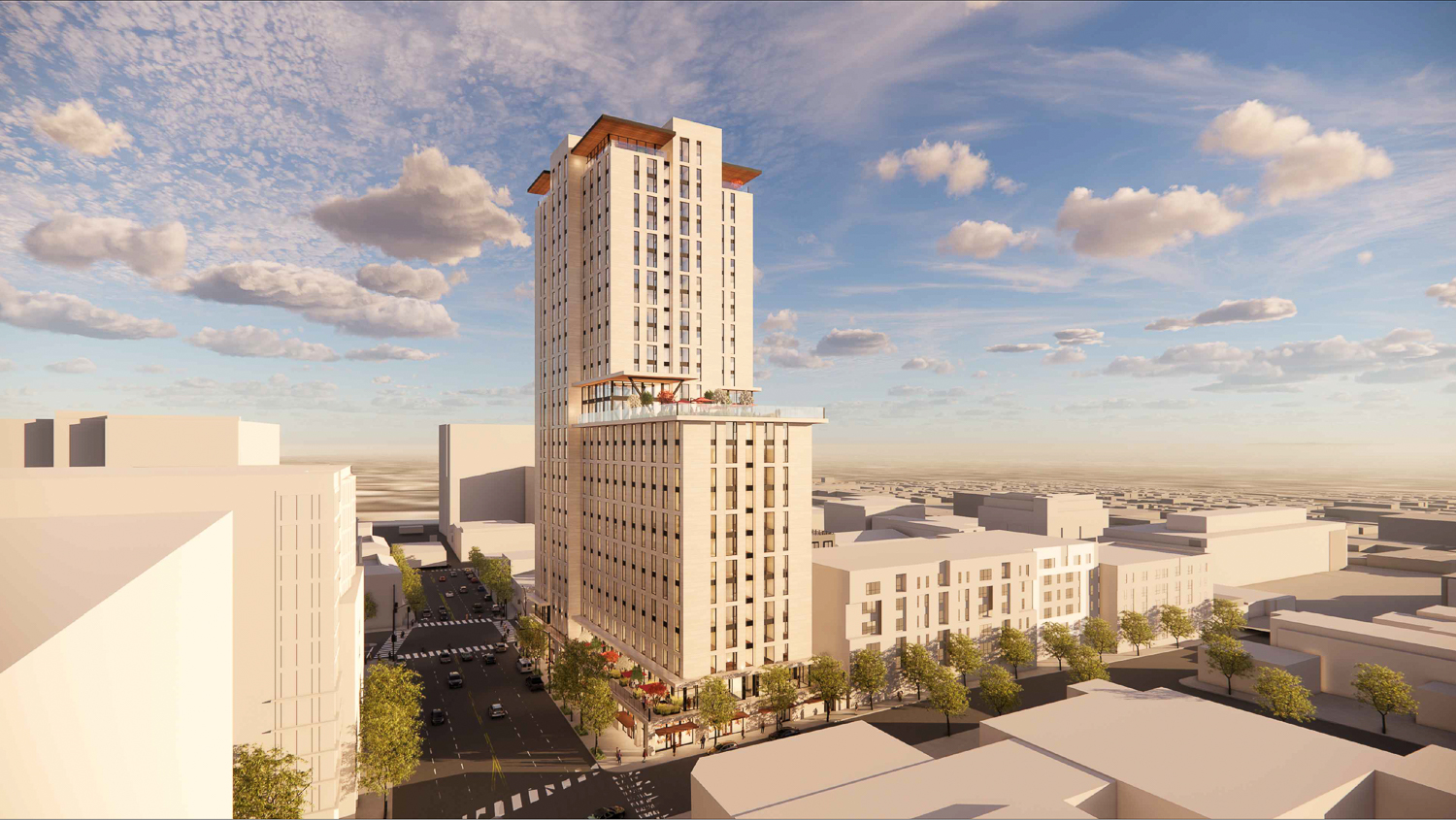 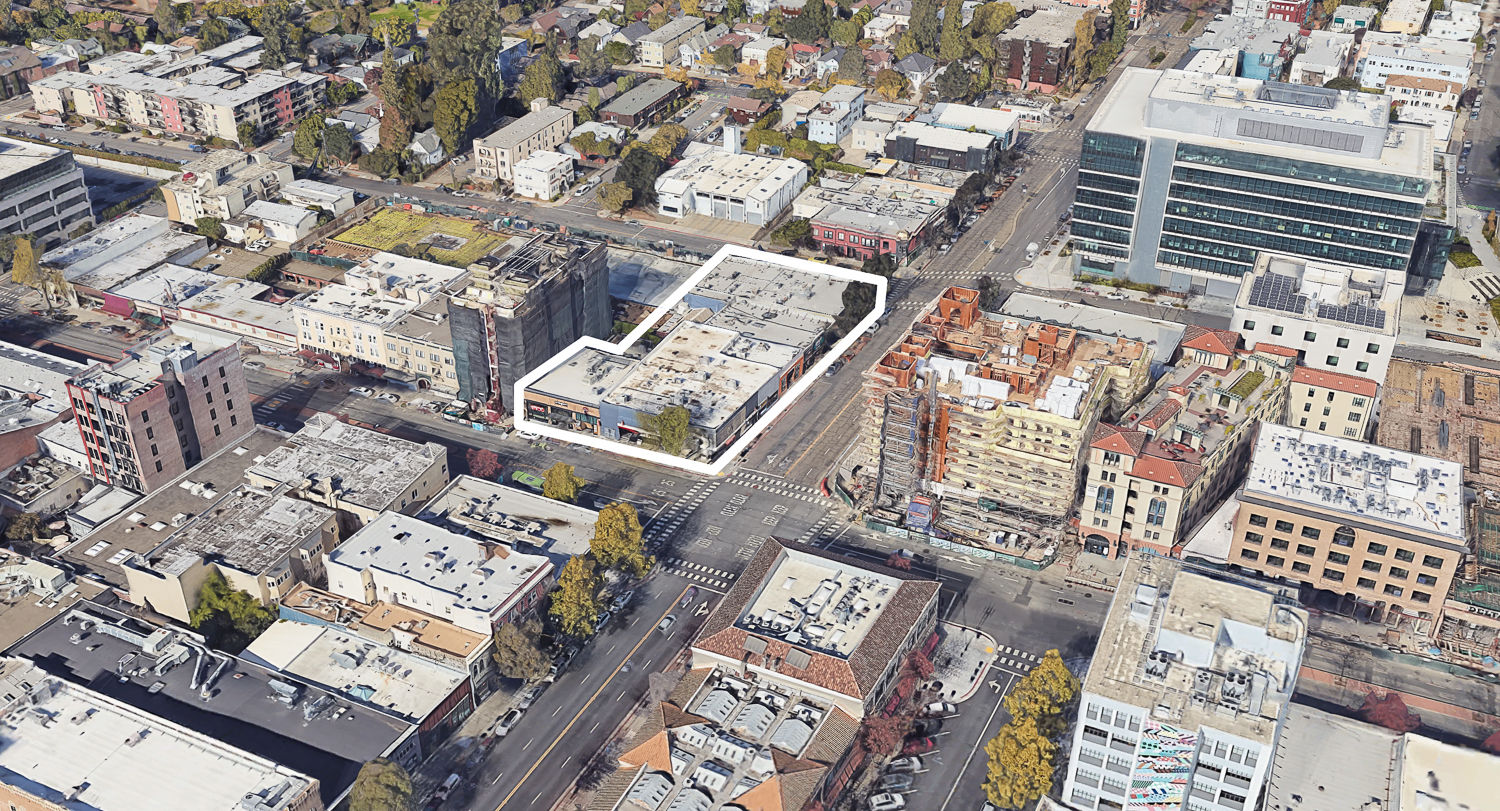 The adjacent properties by 1998 Shattuck have seen plenty of development recently. Construction has finished for the affordable housing project at 2012 Berkeley Way and the 205-unit Modera Berkeley project. YIMBY has also documented the construction progress for the six-story 2067 University Avenue project.

An estimated cost and timeline for construction have not yet been established.