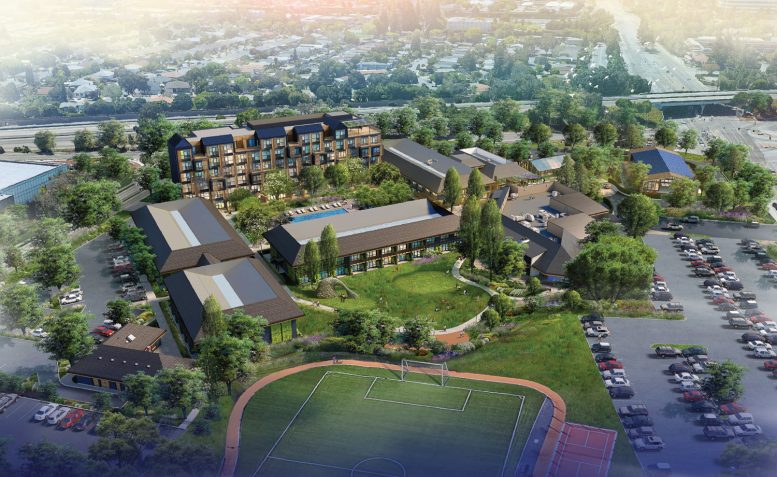 New renderings have been revealed alongside a reduction in size for hotel rooms in the Treehouse at 1100 North Mathilda Avenue in Sunnyvale, Santa Clara County. The special development permit request will reduce the 358 guest rooms to 254. The development will refurbish around half a dozen existing structures and build a new six-story hotel, courtyard pool, greenhouse, and community room. Starwood Capital Group is responsible for the application, while Sheraton Hotel is the property owner.

The 75-foot tall building will yield 187,260 square feet, including a 10,000 square foot restaurant with a capacity for 297 seats. The development is surrounded by on-site surface parking for 206 vehicles and 34 bicycles. The rest of the site is spruced up with 71,400 square feet of landscaping and 38,180 square feet of pathways and patios.

SB Architects is responsible for the design. The project is clad with a myriad of materials, though primarily with colored standing seam metal panels, shingles, aluminum fins, and wood panels.

An estimated construction schedule has not yet been released, and a construction cost has not been shared. The development is near the salt ponds of the Bay, twelve minutes from the Sunnyvale Caltrain station by the Rapid 523 bus. The hotel will open up in an area of predominantly offices, including those for Google and Lockheed.

Be the first to comment on "Renderings Revealed for Treehouse Proposal at 1100 North Mathilda Avenue, Sunnyvale, Santa Clara County"