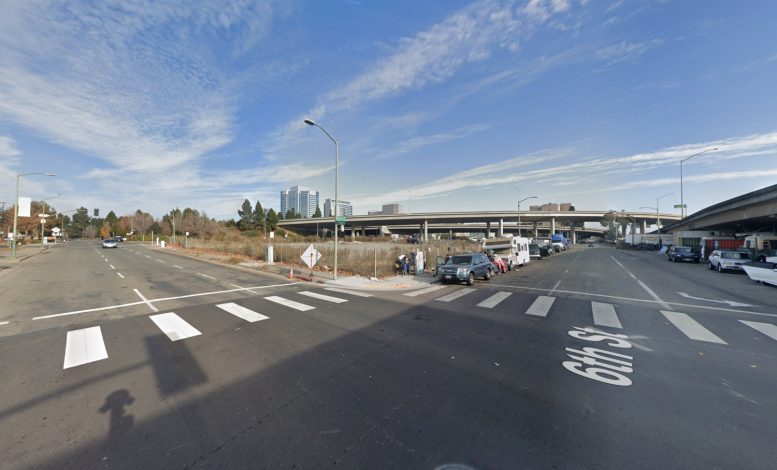 Pre-application permits have been filed for a 24-story residential tower at 600 Castro Street in the corner of West Oakland. The parcel is nearby the planned Oakland Ballpark site and would overlook the fork between Interstate 880 and Interstate 980, two freeways that divide West Oakland from downtown, and the waterfront. Wise Investments Enterprise is listed as the project owner.

The 275-foot building would add between four hundred and five hundred new units to the Oakland housing market. The dense urban proposal could be a significant help addressing the Bay Area’s housing shortage if approved. Especially because the 57,960 square foot property at 600 Castro Street is currently vacant.

Residents would find themselves just over a ten-minute walk away from the 12th Street BART station, with close proximity to Jefferson Square Park and Lafayette Square.

The Howard Terminal is less than ten minutes away on foot, where the city has been working on a master plan that would create as many as 3,000 new housing units, retail, 1.5 million square feet of offices, and landscaped open space around the future home stadium for the Oakland As.

However, the future of the full-fledged neighborhood development has been shaken following the recent announcement from the baseball team that they will start to consider other cities after losing patience with the city’s prolonged planning process.

The application was filed in January and is still under review. Further information about the development has not yet been released.

Be the first to comment on "Pre-Application Filed for 24-Story Tower at 600 Castro Street, West Oakland"