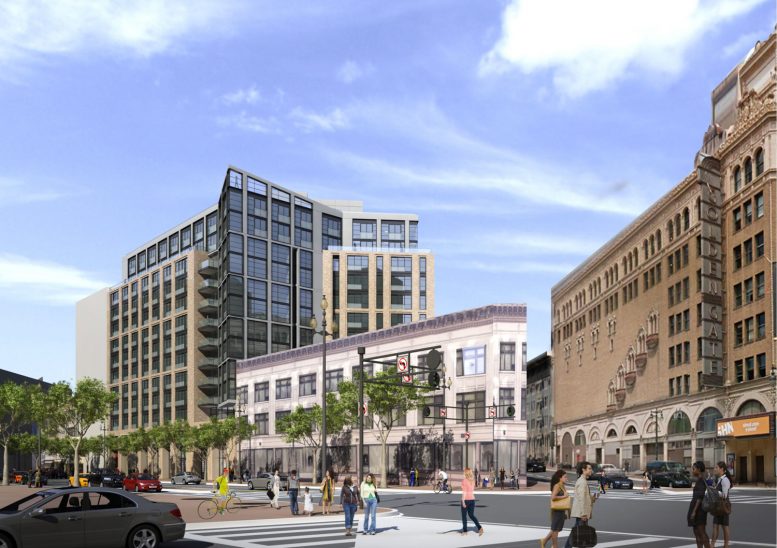 A new apartment building overlooking Market Street is nearing the opening point. Crews have begun dismantling the crane for 1028 Market Street in the southeast corner of San Francisco’s Tenderloin neighborhood. The project will produce affordable and market-rate housing blocks away from two BART Stations. The Olympic Residential Group and Tidewater Capital are responsible for the development. 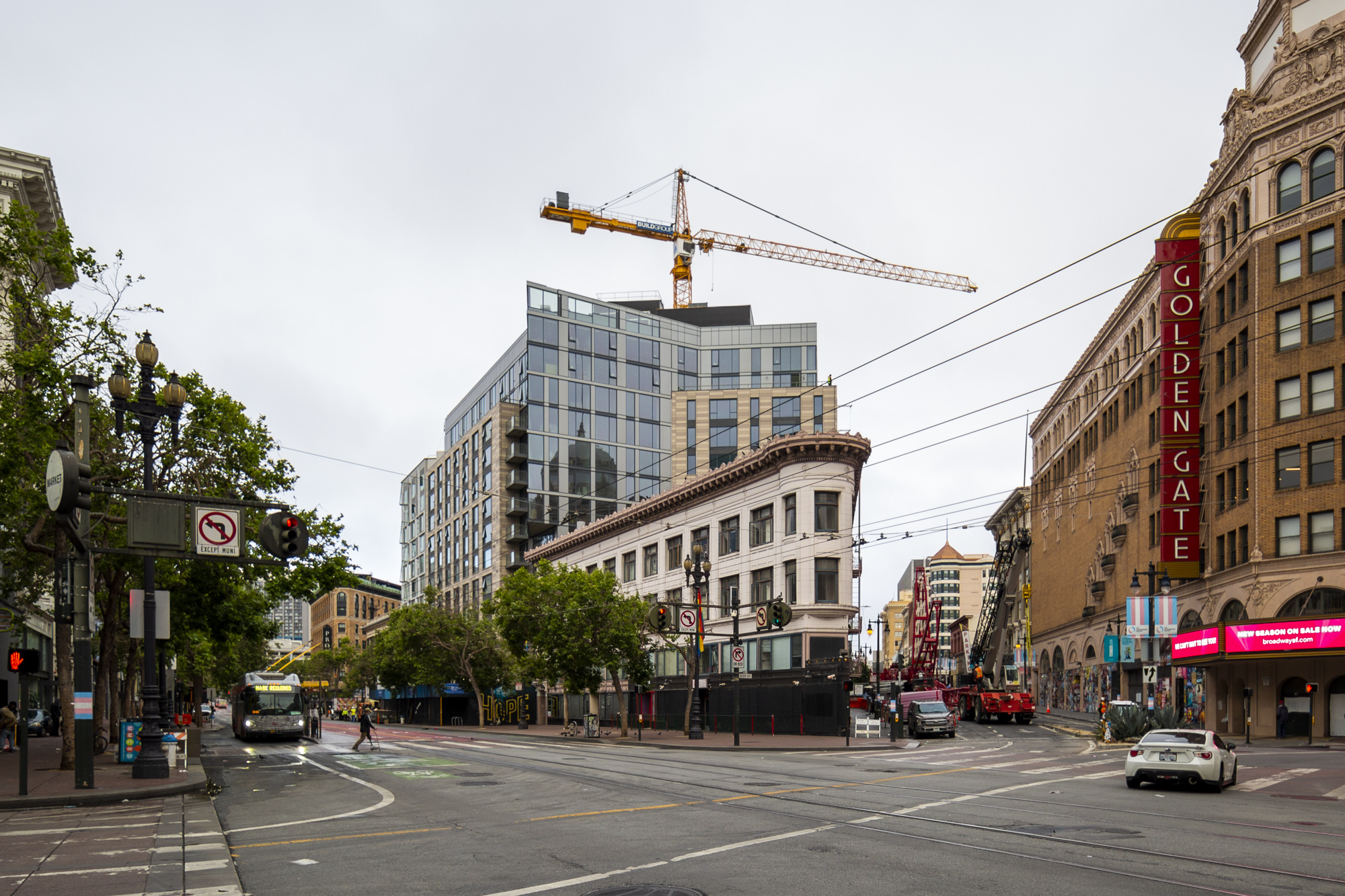 A recent site visit shows a mobile crane visiting the site to assist in the disassembly of the construction crane. SFYIMBY has since confirmed that the process of crane removal has begun. 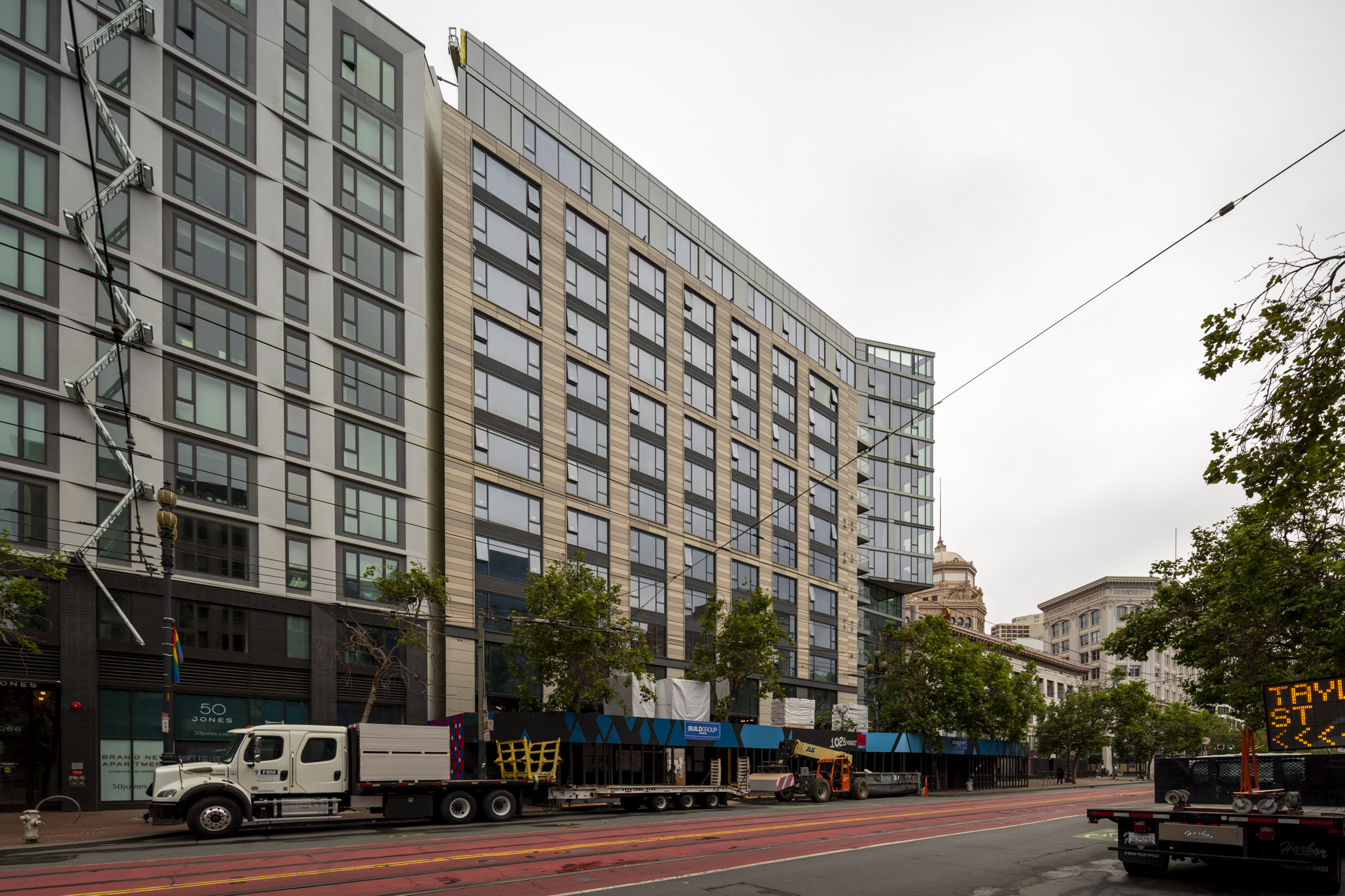 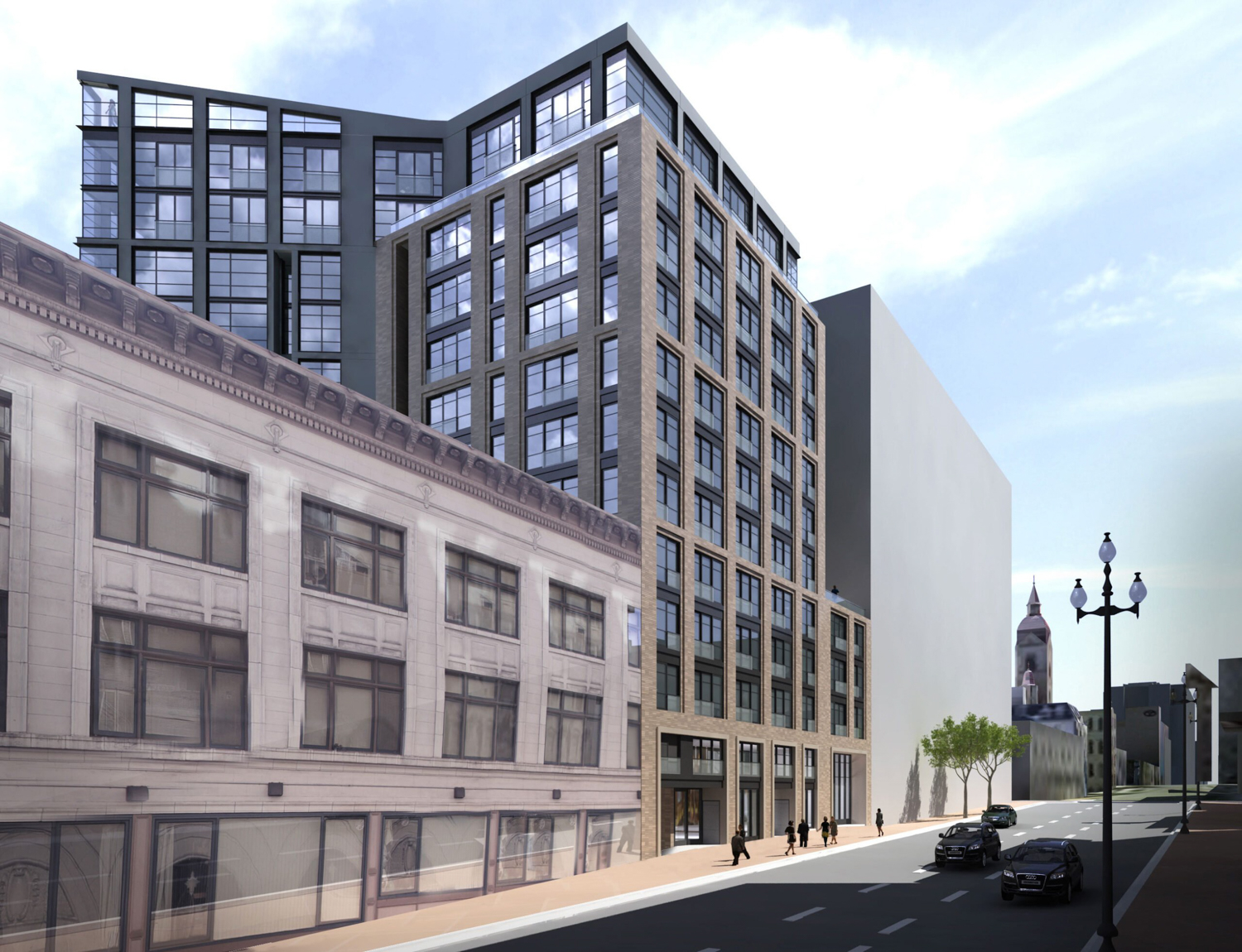 Solomon Cordwell Buenz is responsible for the design, with RHAA Landscape Architects collaborating for the open and landscaped areas. The asymmetrical and contemporary design appears to be bursting from its parcel, with a curtainwall focal point facing toward Market and Golden Gate Avenue. 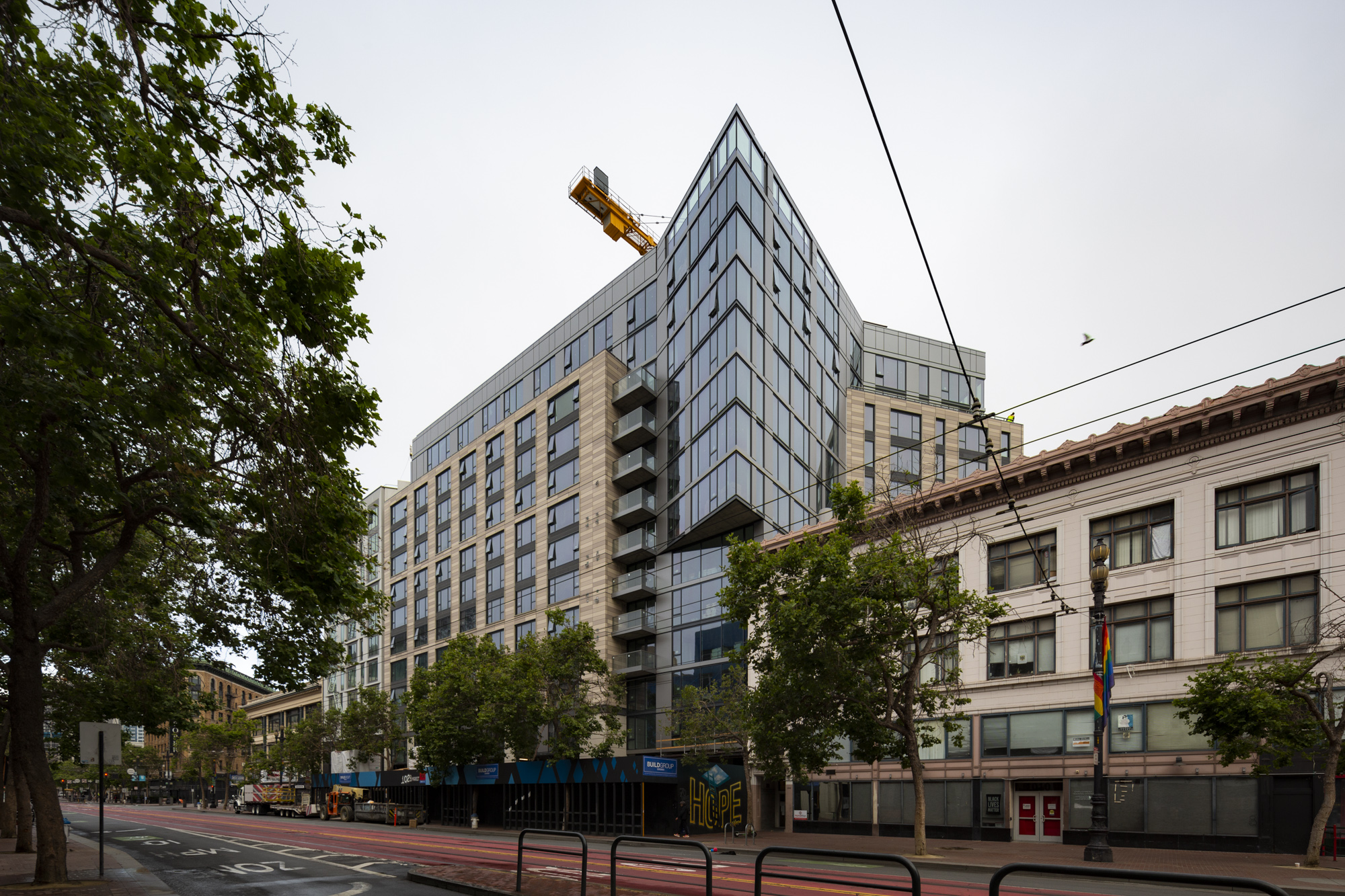 The project was almost derailed by an environmental impact report from 2016 that held in high regard the history of the previous structure at 1028 Market Street. The 1907-era building was home to the Hollywood Billiard. Within the EIR, the city wrote, “While the building does not exhibit a distinguishable architectural style in its present state, the building once had ‘restrained Renaissance/Baroque ornamentation.’” The ornamental features were already absent at the time of publishing the EIR. 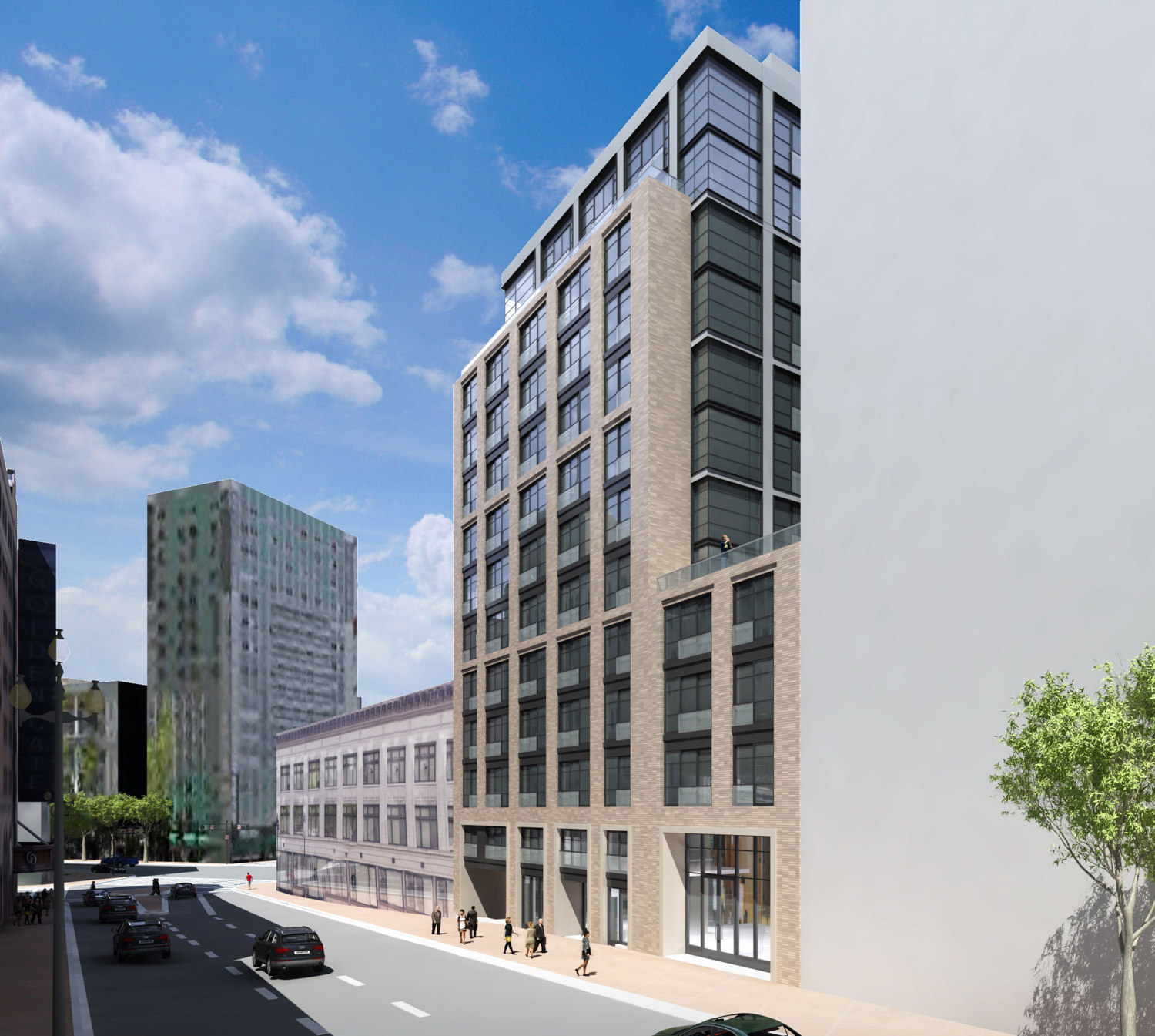 The building is a block away from Serif SF and the 6×6 Mall, both part of previous SFYIMBY coverage. Both the Powell Street and Civic Center are nearby, approximately one and two blocks away, respectively.

The property sold in 2019 for $10.1 million, with construction expected to cost $60 million. The building is expected to be finished in the Fall of 2021.

Be the first to comment on "Crane Dismantling Starts for 1028 Market Street, Tenderloin, San Francisco"