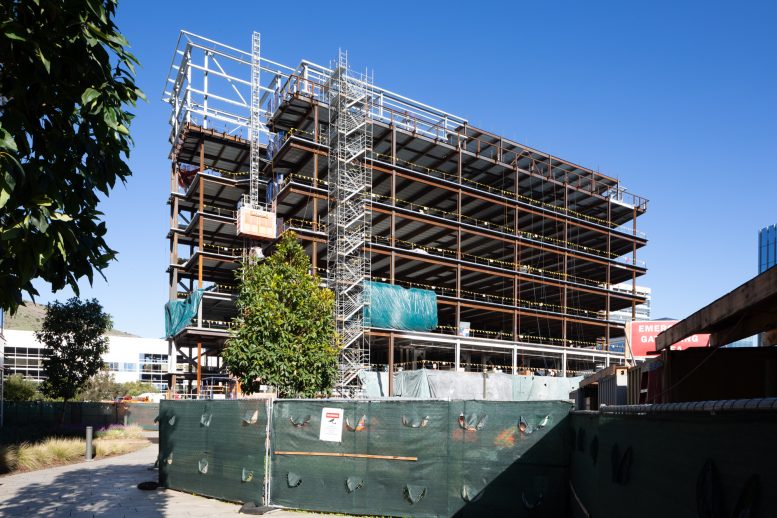 Construction has topped out for the new R&D office building at 751 Gateway Boulevard in South San Francisco. The project has replaced a large surface parking lot in the city center, expanding the Gateway Campus owned by Alexandria Real Estate Equities and Boston Properties. The development is a joint venture between the two developers. 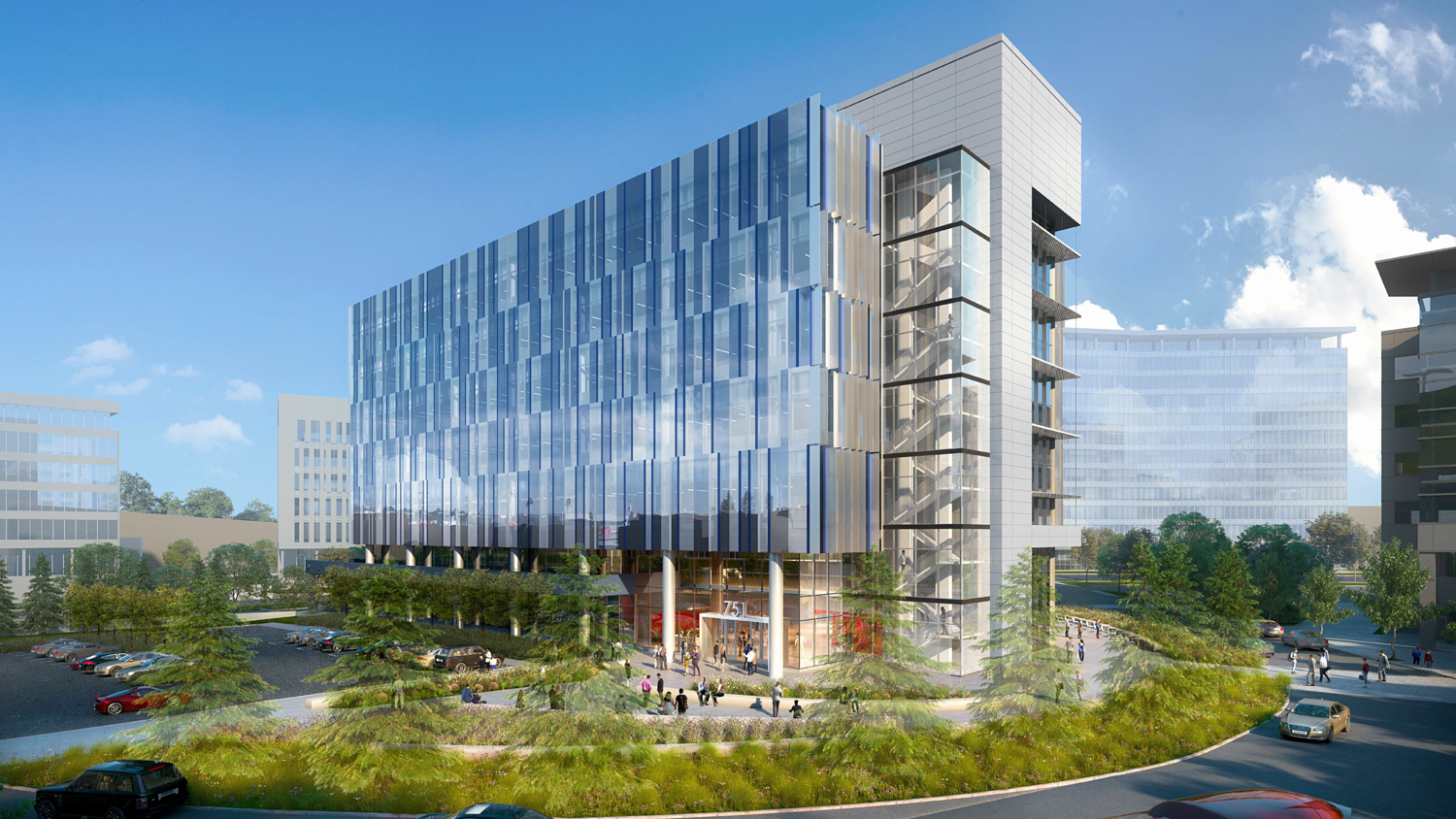 The 148-foot project will cover just under a fifth of the 320,460 square foot lot, creating 208,800 square feet of floor area. The building will have just seven levels, with an average ceiling height of 20 feet. Parking will be included for 418 vehicles. A surface parking lot immediately beside 751 Gateway will have 42 spots. The project was limited by city zoning, requiring a maximum floor area ratio (FAR) of 1.25. 751 Gateway has an FAR of 1.18. 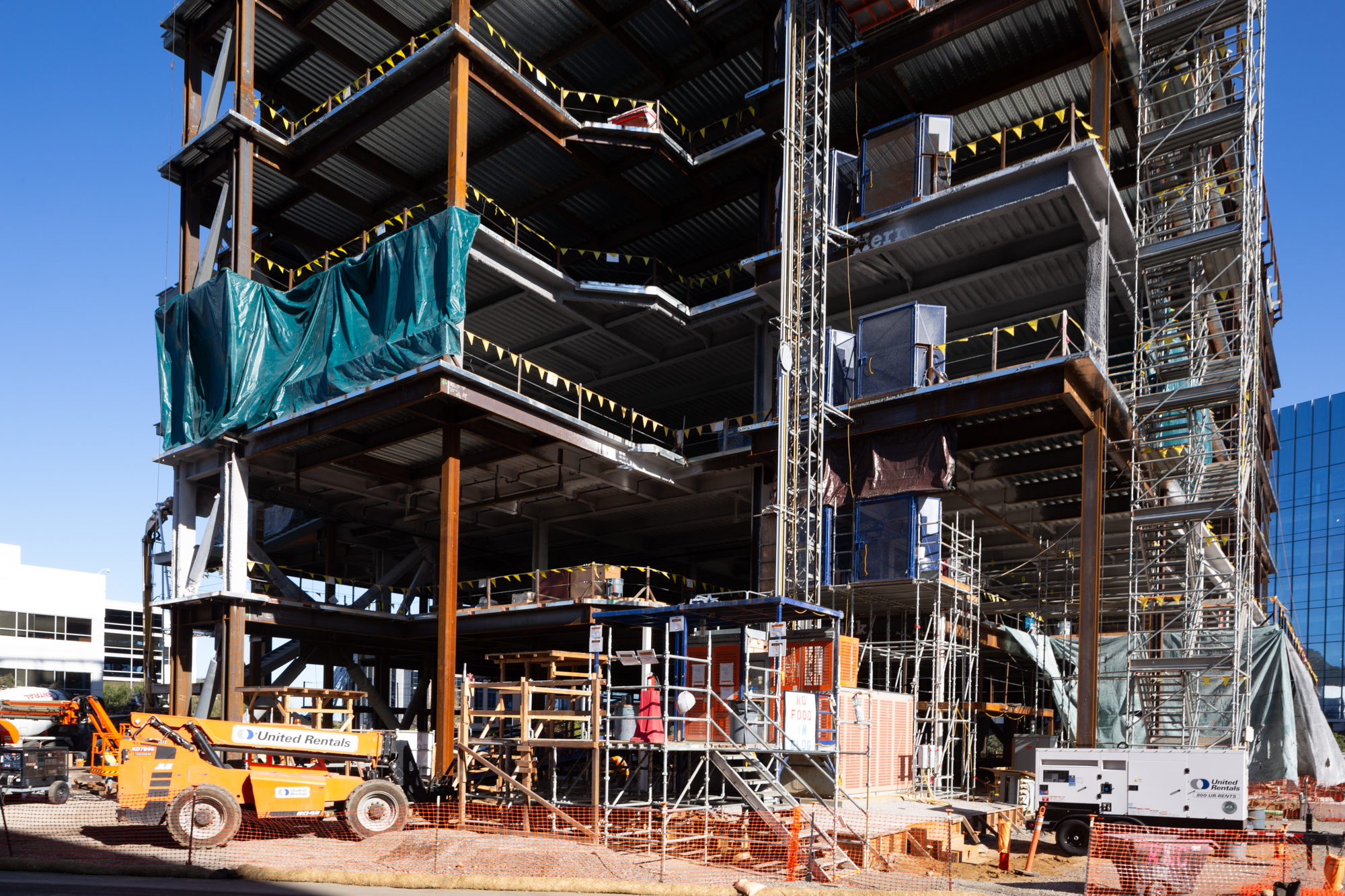 RMW Architecture is responsible for the design. The facade design will be simple, wrapping the large steel frame with a curtain wall improved with glass fins and a pixelated rain effect. The lobby will rise two floors, clad with a light sandstone hue with room to exhibit art.

DPR Construction is the project contractor, BKF Engineer is the civil engineer, Nishkian Menninger is the structural engineer, and Berkeley-based Mantle Landscape Architecture is responsible for the landscape. 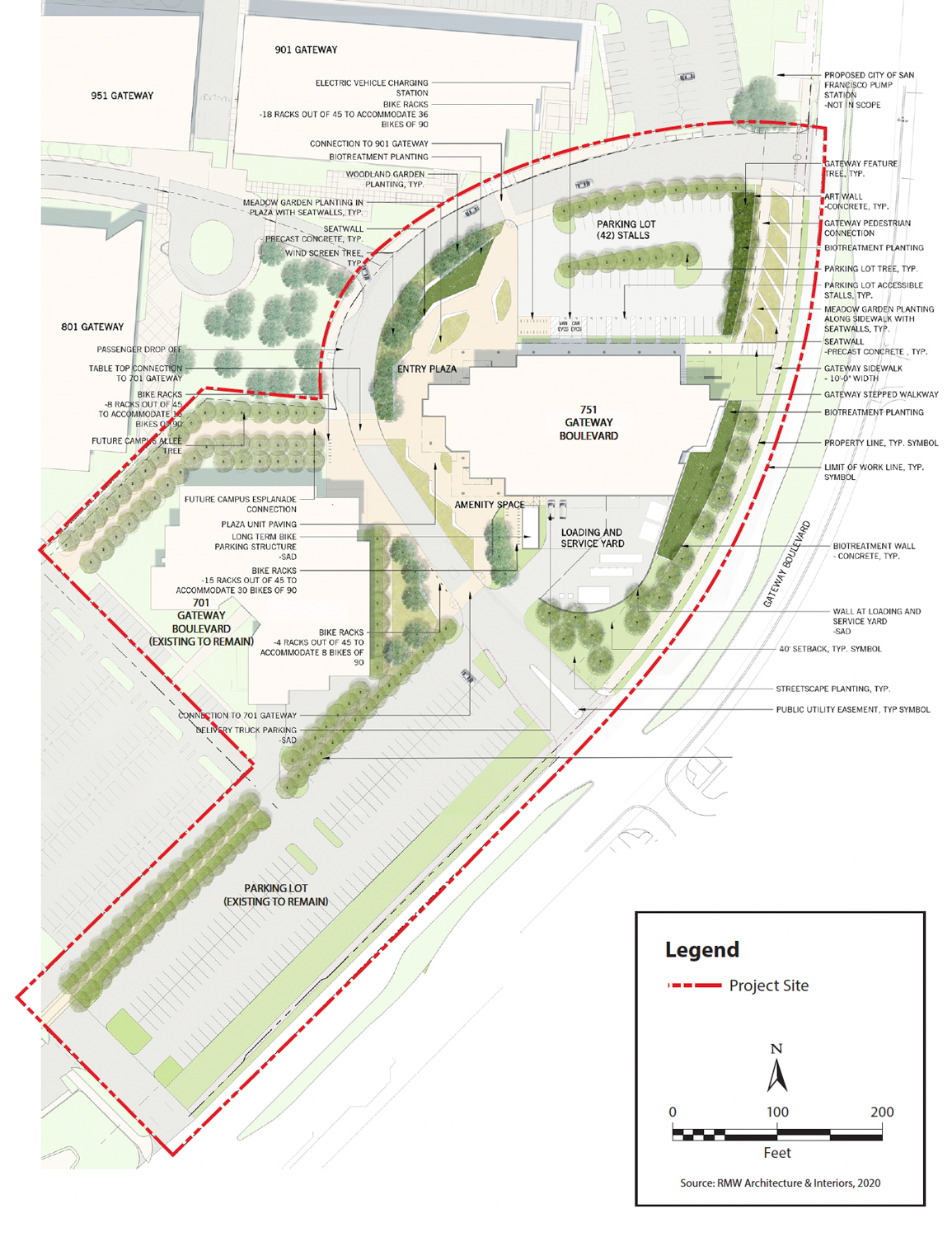 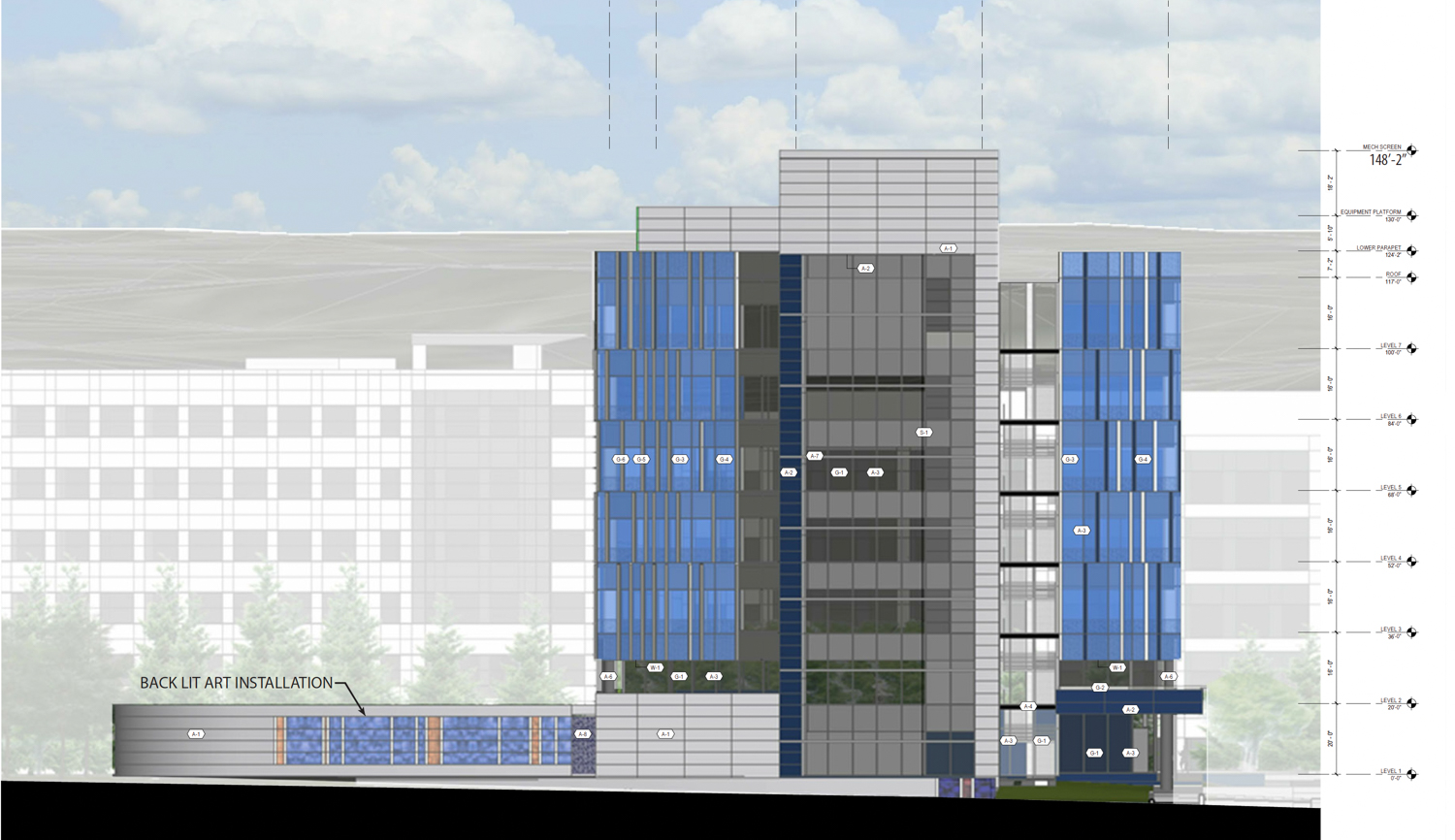 The property is to be wrapped with landscaping. Meadow garden planning will face the sidewalk. Trees will line the relatively small parking lot, and the outdoor amenity space will connect with a landscaped entry plaza to offer open-air seating.

Boston Properties and Alexandria Real Estate Equities entered the joint venture in January of 2020. The two firms have unified the campus with eight existing structures and a sea of surface parking in South San Francisco, with ownership of the 1.1 million square feet for life sciences split evenly between the two firms. The venture also promised the new construction of 640,000 square feet for the campus. 751 Gateway Boulevard will contribute a third of that new space.

“South San Francisco is one of the largest life sciences and biotechnology centers in the world and we are excited to jointly own and develop a state-of-the-art campus in one of the Bay Area’s best locations,” said Owen Thomas, CEO of Boston Properties. 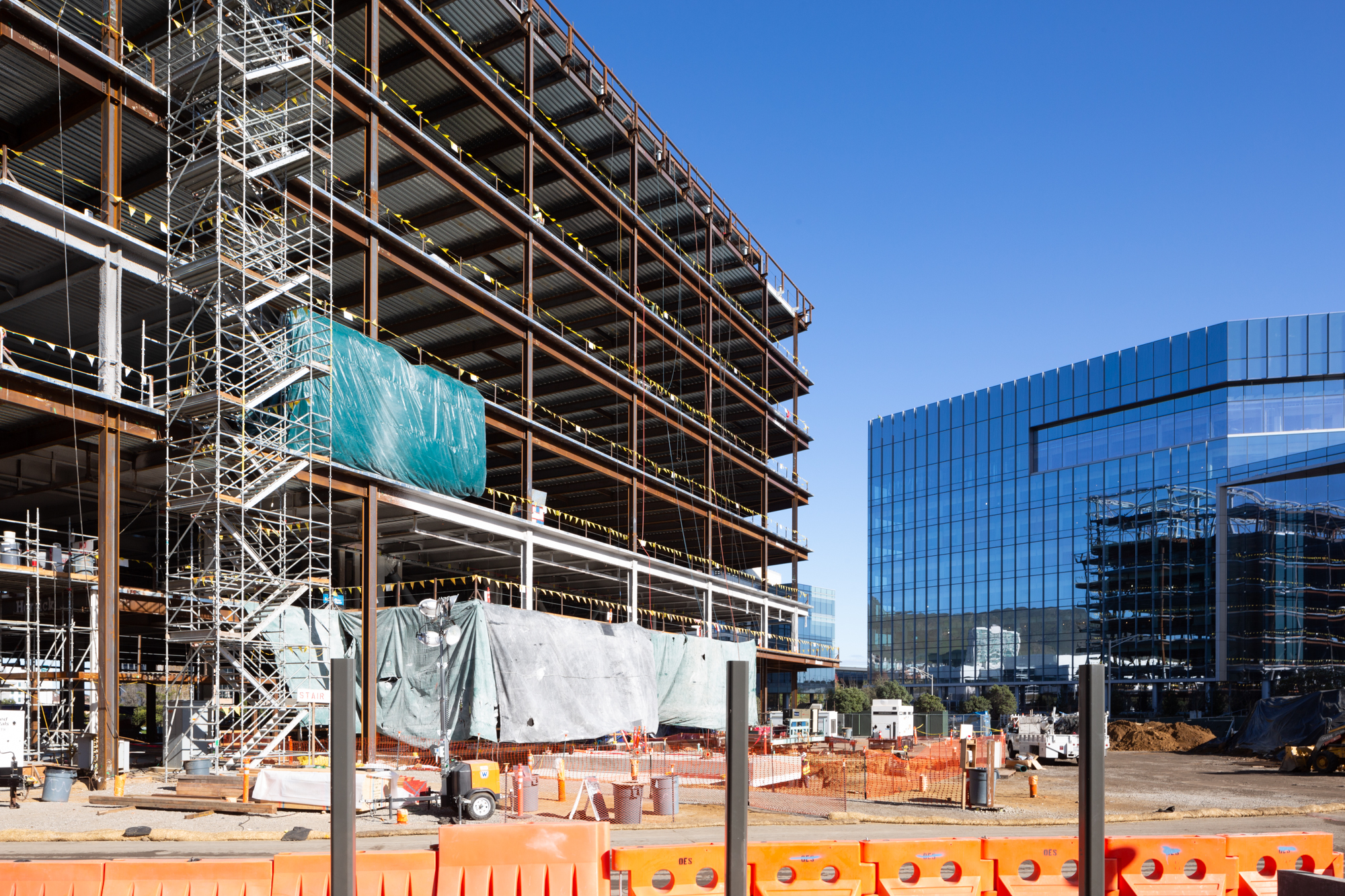 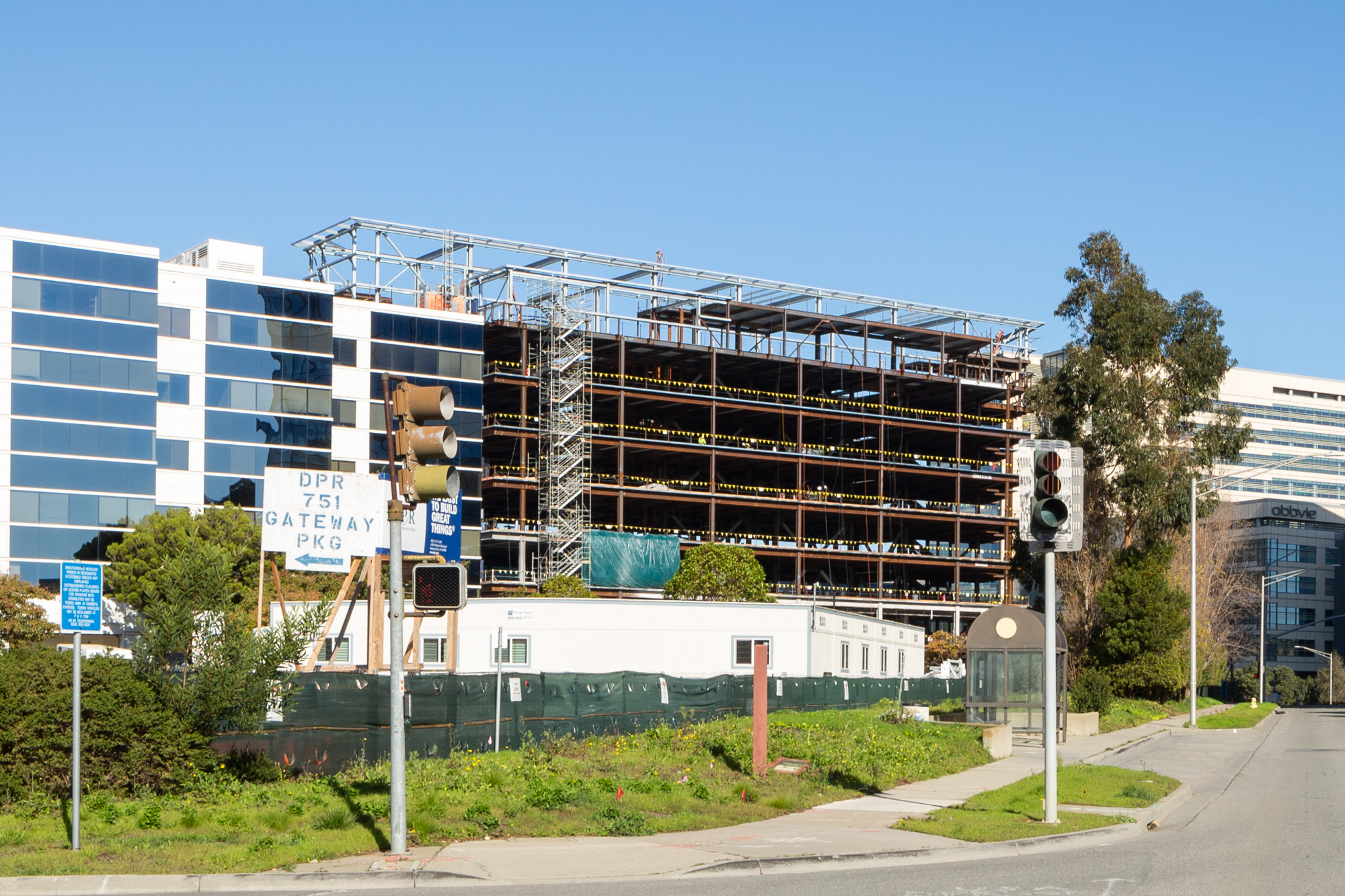 Before construction, the Gateway campus included 3,457 parking stalls across 1.08 million square feet, split between surface parking and a large garage structure. The new building has replaced a 376-car lot with 42 parking spots and greenery. Once 751 Gateway is complete, the campus will contain 3,099 parking spaces, still a sizable quantity. 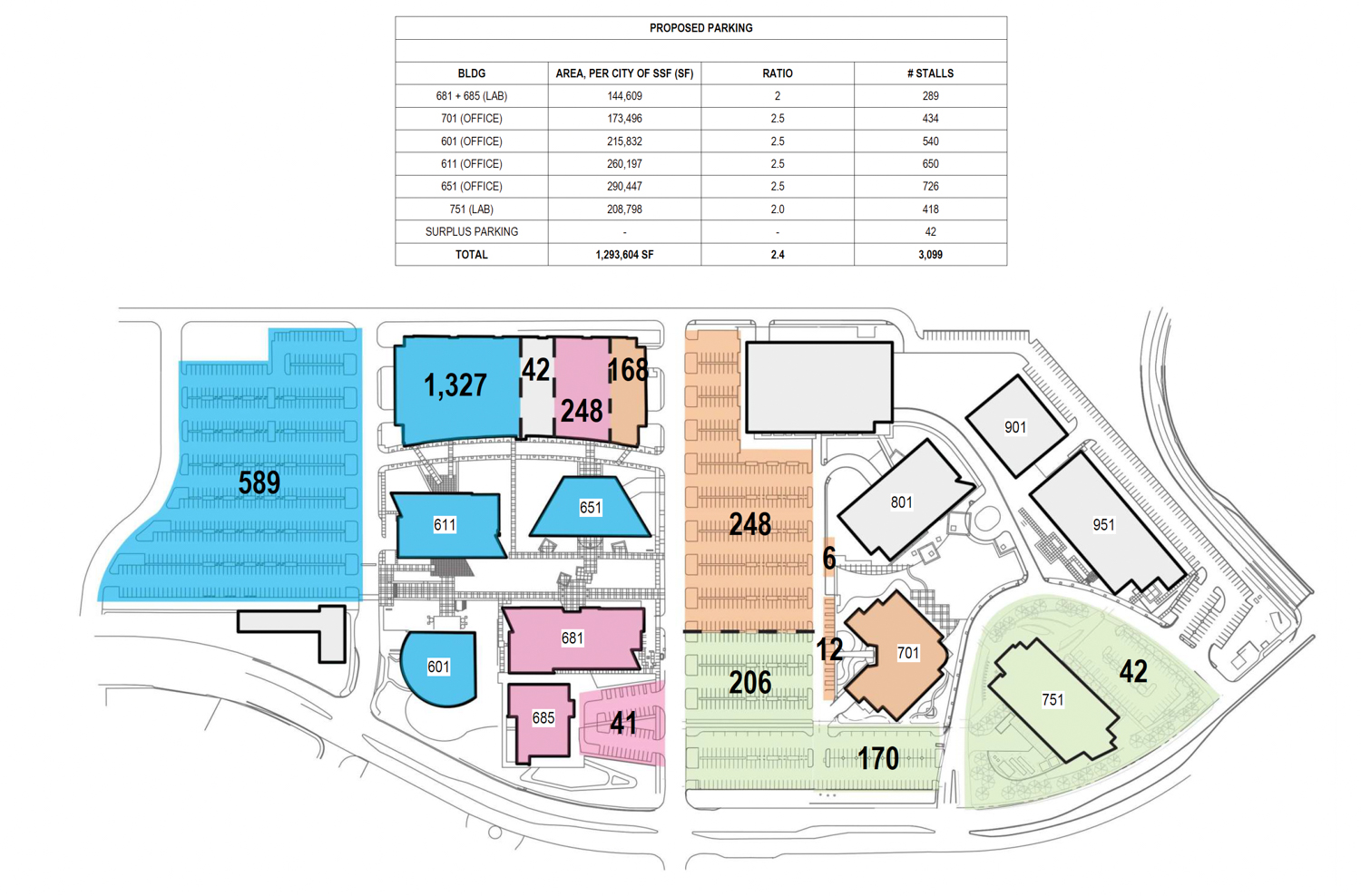 Completion of 751 Gateway Boulevard is expected in 2023.

The Gateway Campus is across from the Gateway of Pacific campus, owned by BioMed Realty, a Blackstone portfolio company. Construction is currently underway on a significant expansion by BioMed, to be covered by SFYIMBY soon.

Be the first to comment on "Construction Tops Out for 751 Gateway Boulevard, South San Francisco"