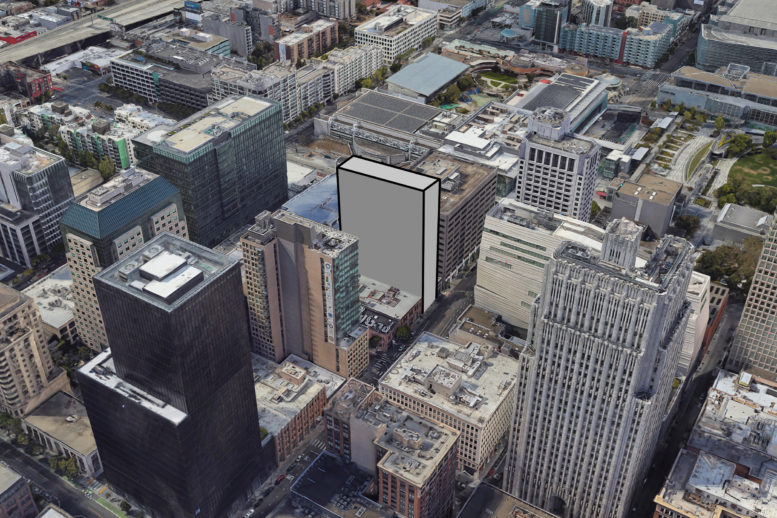 New plans have been revealed for a mixed-income residential tower to rise at 661-667 Howard Street in SoMa, San Francisco. The news comes as Reuben, Junius & Rose, a prominent real estate law firm, submitted a Request for Zoning Administrator Determination to the San Francisco Planning Department. A project developer has not been revealed.

The development would include Transferable Development Rights from 657 Howard Street, a two-story brick building completed in 1922. In the project application, the law firm compares the potential tower built next to 657 Howard and the recently-completed 47-story tower at 706 Mission street, which involved the historic renovation of the Aaronson Building.

In concluding the letter, the law firm writes that “the [State Density Bonus Program] requires its provisions to be interpreted liberally in favor of producing the maximum number of total housing units. The reasonable interpretations discussed above would do just that, creating a mixed-income housing project in a transit-rich setting.”

The property is currently zoned with a height limit of 250 feet tall. However, waivers from the State Density Bonus and accumulated development rights may allow the project to rise even higher from the narrow lot overlooking SFMOMA. Future residents would be in the thick of the city within walking distance of Salesforce Park, Yerba Buena Gardens, several MUNI bus lines, and BART.

Be the first to comment on "Possible Residential Tower Considered for 661-667 Howard Street, SoMa, San Francisco"