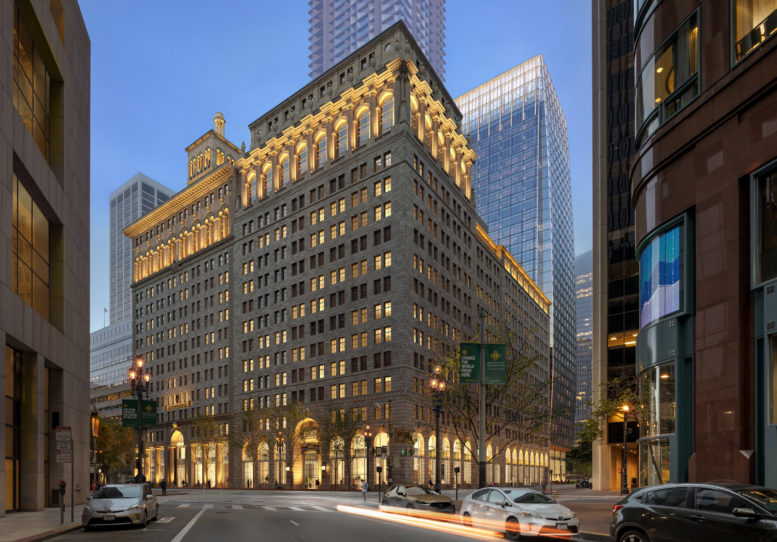 New renderings have been revealed for 200 Mission Street and the Historic Market Complex, the office components for the City Grove, formerly the Atlas campus, in SoMa, San Francisco. The master plan, led by Hines and which features the second supertall proposed for the city, will breathe new life into the three buildings.

The plans for both projects reflect how the same architecture firm, Pickard Chilton, connects with the past today. 200 Mission Street will reimagine a half-century-old skyscraper with a new bulging glass skin, while the Historic Market Complex will be a pristine restoration of towers both about a century old. 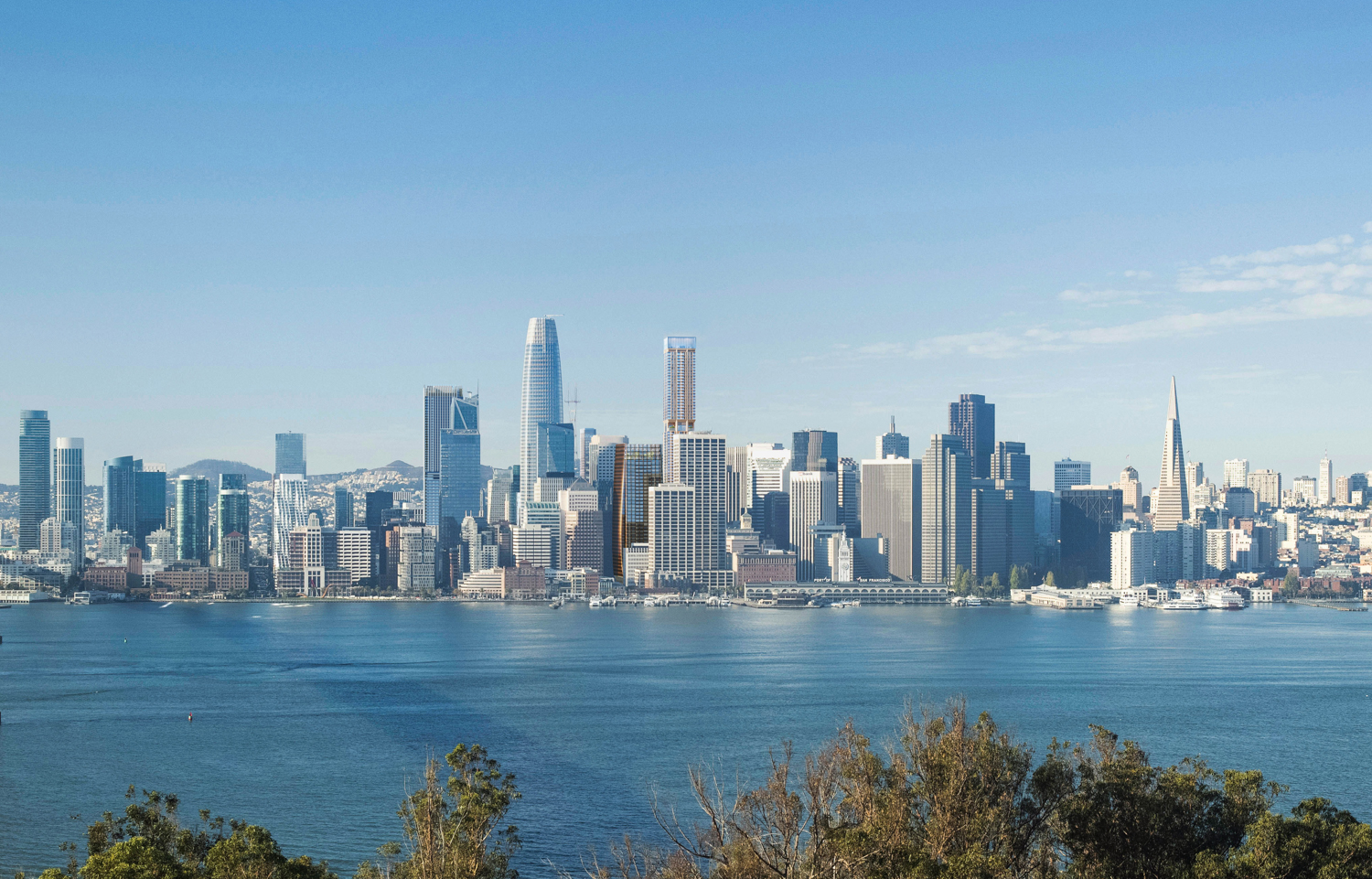 50 Main Street and the City Grove in the San Francisco skyline, design by Foster + Partners 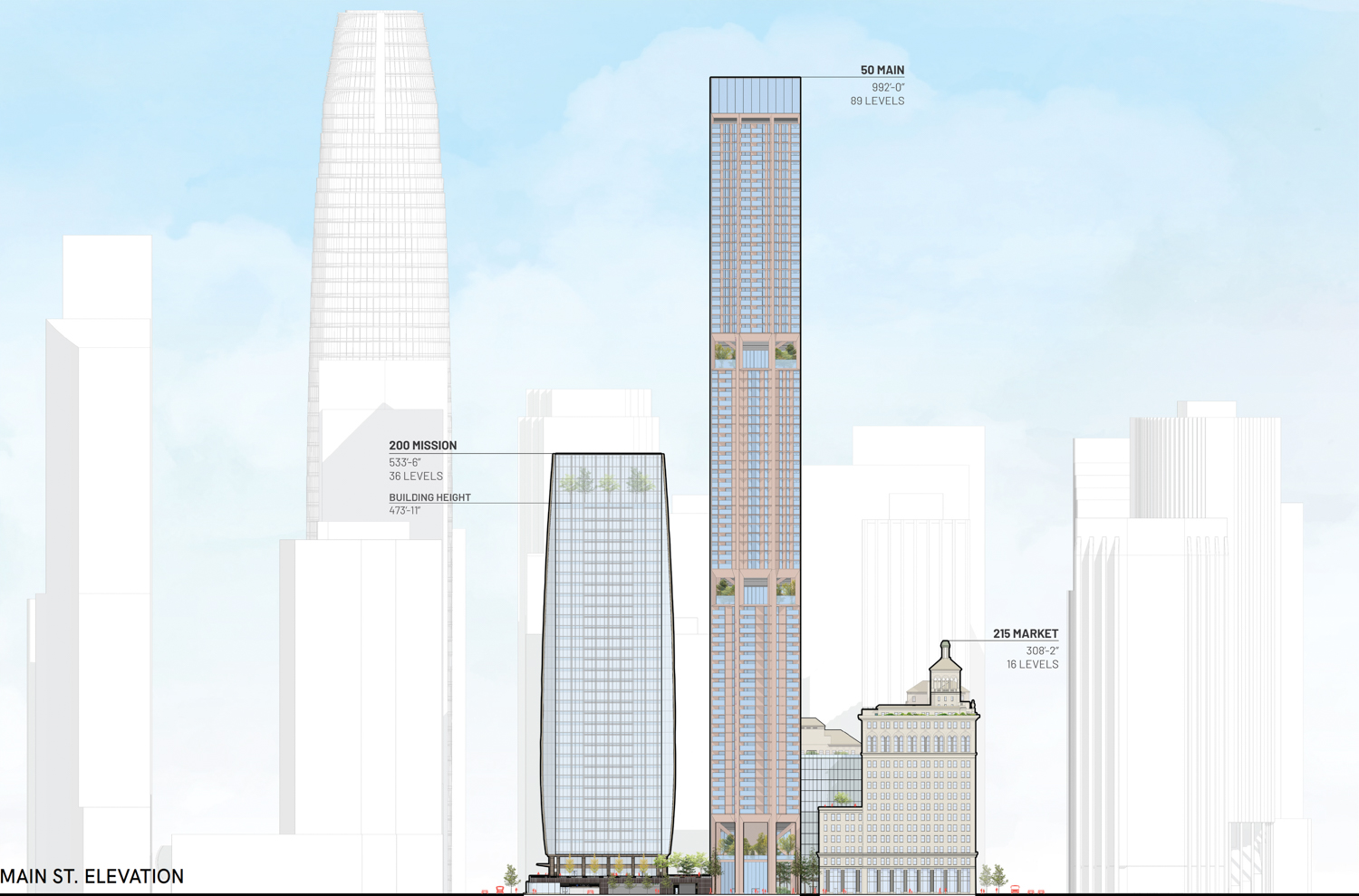 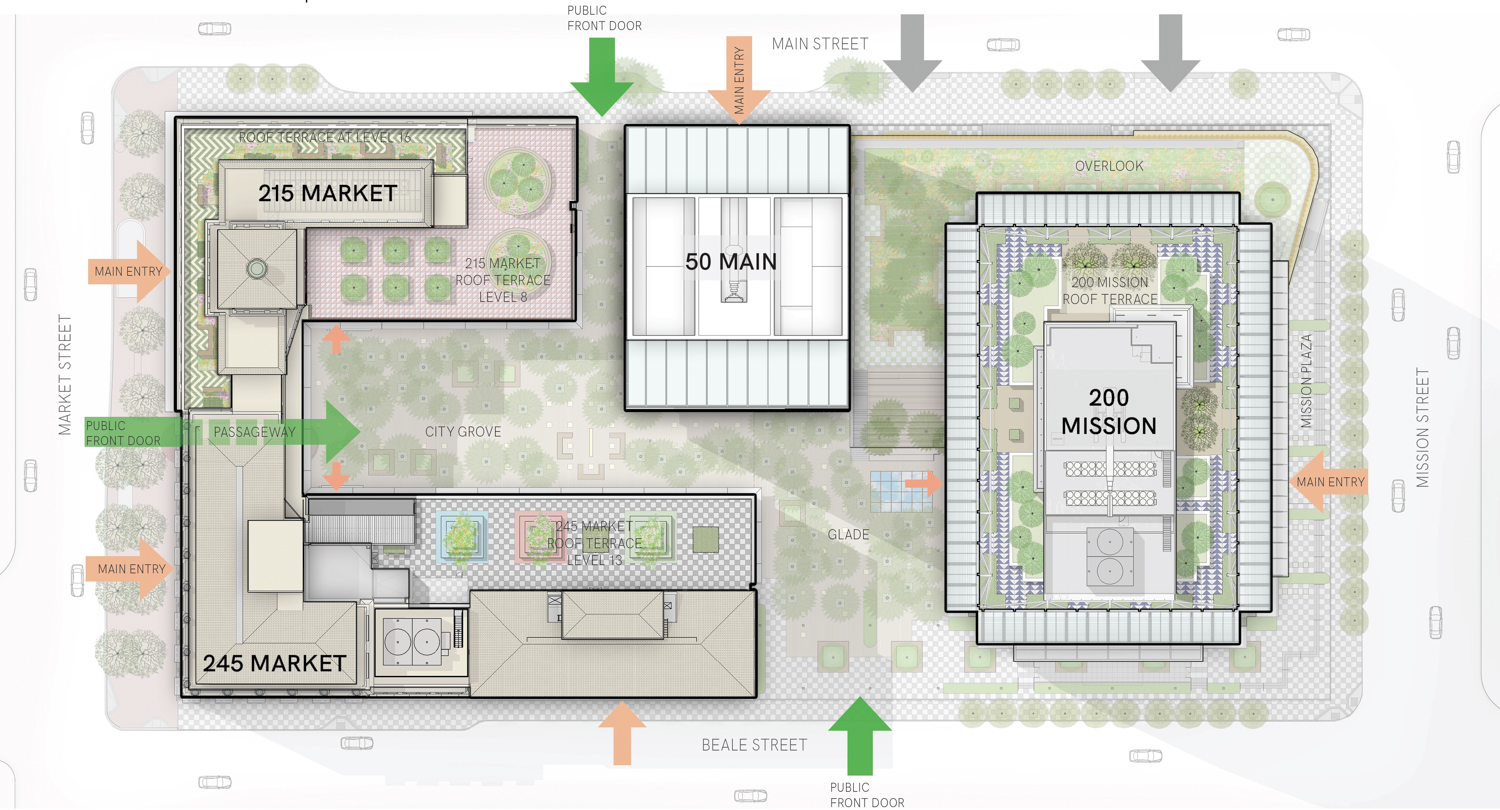 The City Grove masterplan splits the 3.5-acre campus into four key components. This includes the alterations on 77 Beale Street, to be readdressed as 200 Mission Street, renovations of the Historic Market Complex, creating a 1.25-acre public park, and the 89-story supertall tower at 50 Main Street.

The new details and renderings about City Grove Block are so substantial that we are splitting our coverage between two articles. This article focuses on 200 Mission Street and the Historic Market Complex, while our lead story covers 50 Main Street and the public park. 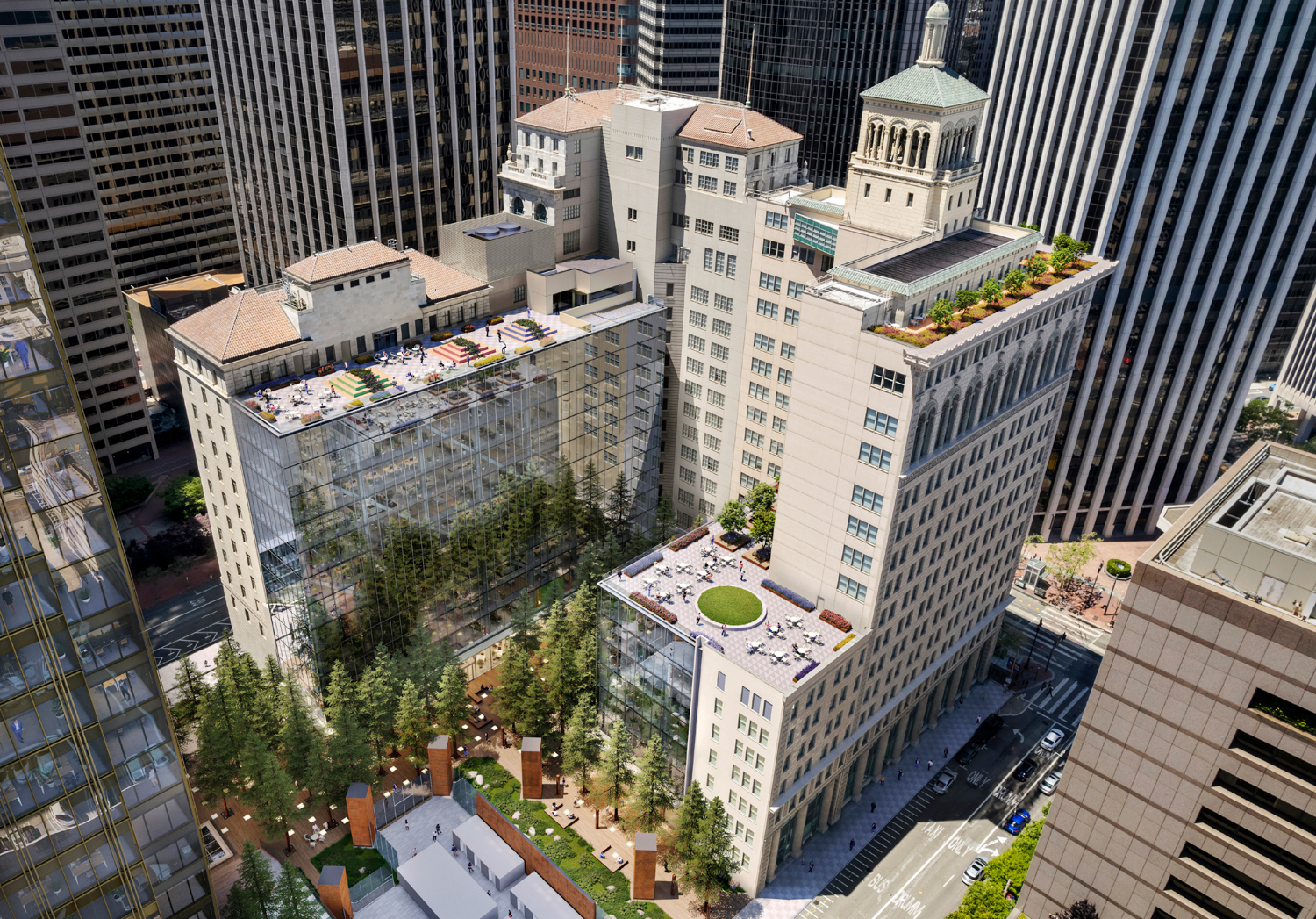 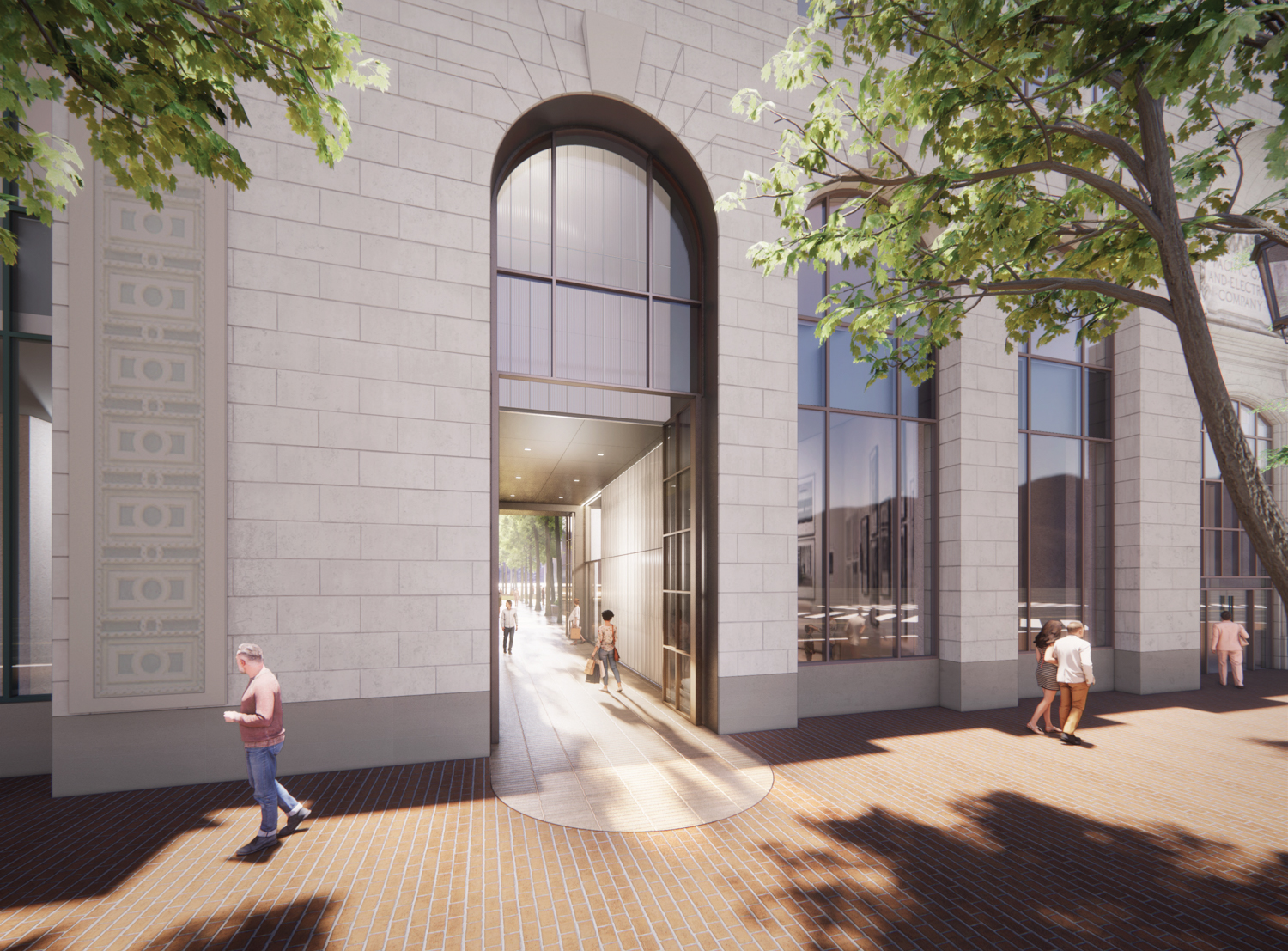 The best new renderings for the offices are for the Historic Market Complex. Aerial views and street views show how the street-facing exterior will be repaired to retain its unique character, and the former courtyard will be restored to its original function with modern design. With some office structures demolished, the floor area will be redistributed vertically in glass-clad extensions facing the City Grove.

The 259-foot tall offices offer 620,000 square feet, with plans to have 569,600 square feet for offices and 33,160 square feet for retail. There will be three lobbies, with two main entrances along Market Street within the historic portals and one along Beale Street for 245 Market.

Pickard Chilton writes that the design “deliberately maintains the presence of the historical complex on all street frontages… Existing facades along Main, Market, and Beale Street will be repaired and restored per the Secretary of the Interior’s Standards.”

The proposal will merge the Matson Building at 215 Market Street and the PG&E Building at 245 Market Street, both Category 1 historic buildings. The team aims to achieve LEED Gold Certification. Potential air porches, a later addition to the design scheme, would be introduced on each floor. Open-air terraces will be included on floors 8, 13, and 16, offering employees a reprieve with views of the surrounding skyscrapers like One California Street. 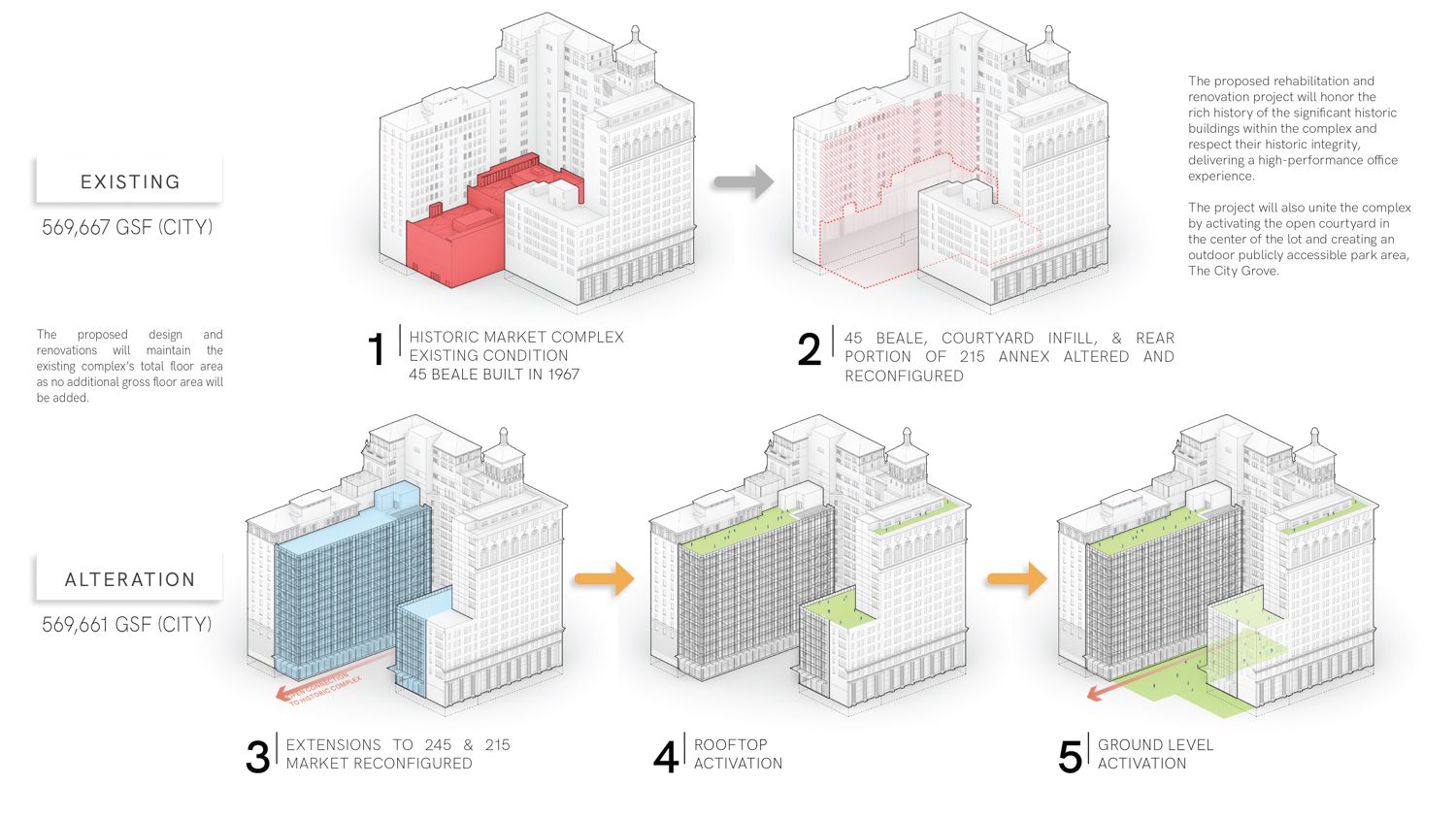 Demolition will be required for the 45 Beale mid-block addition from 1967. In its place, a new curtain-wall design will provide employees with unobstructed views of The City Grove and 50 Main Street. The glass additions are positioned “with the objective of avoiding loss of character-defining historic materials and features.”

The application goes on to write that the “proposed design restores the original relationship shared among the historic office buildings constructed in the 1920s and their annexes built between 1947 and 1948, reopening the courtyard space.” Retail shops will face the City Grove, further activating the public plaza.

An arched passageway will connect Market Street pedestrians to the City Grove public open space. The paseo within the PG&E Building will have large glass doors open during the day and close in the evenings. 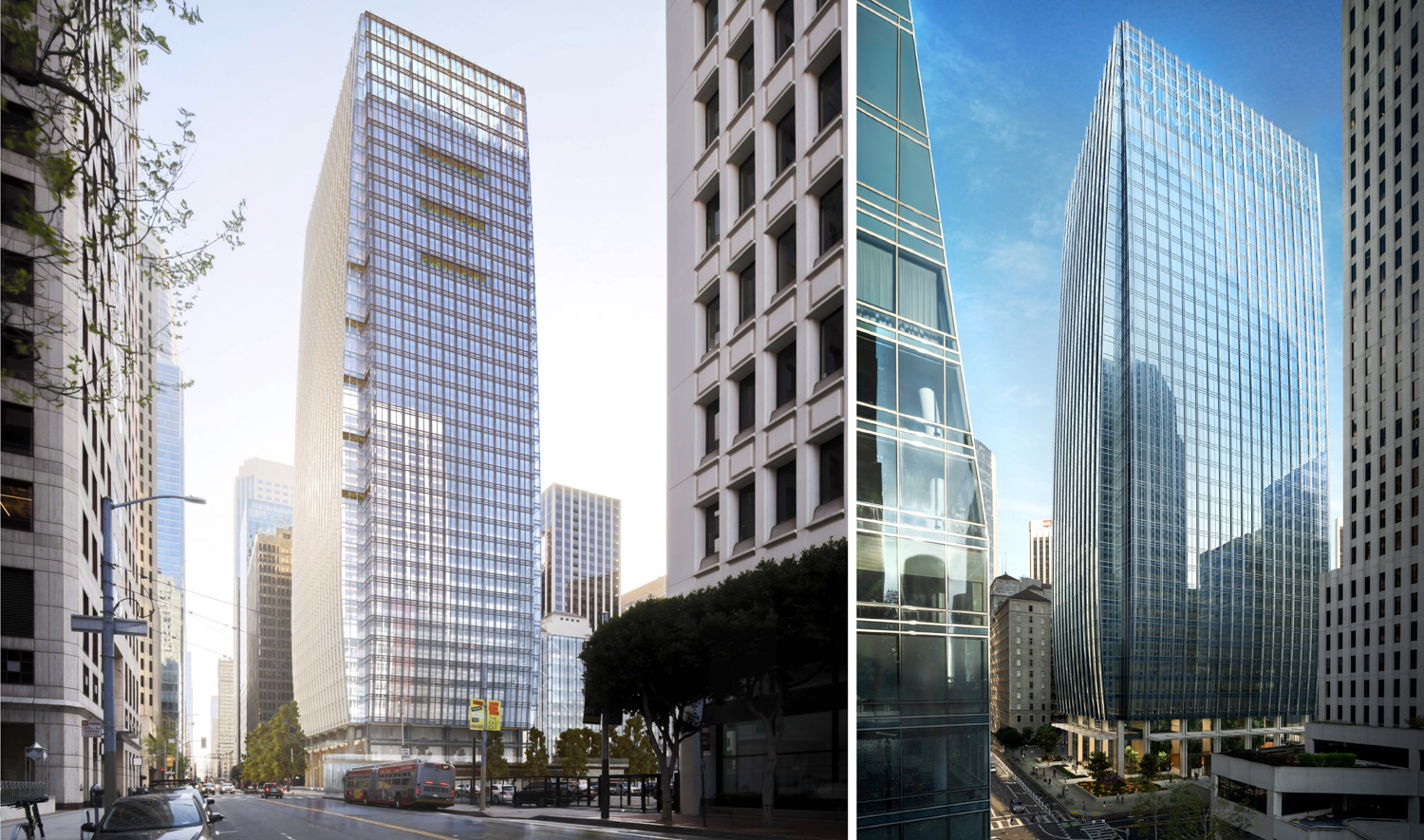 200 Mission Street will be among the most dramatic reskinning projects in San Francisco’s history in terms of visual and physical changes in contrast with jobs like 100 Van Ness and 633 Folsom Street. The existing mid-century headquarters for PG&E is the design of Hertzka and Knowles, a prominent local studio founded in the 1930s. The building was opened in 1971.

Once reshaped, the 533-foot tall tower will yield around 1.08 million square feet, with 1.05 million square feet of office space, 5,000 square feet for ground-level retail, and 24,590 square feet for the 107-car garage. The adaptive reuse will increase the floor count from 35 to 36. Recent plans have revealed that the tower may be punctuated with hidden air porches with sliding glass windows that can open up to provide fresh airflow through the offices.

The streetscape of 200 Mission will feature a public entrance to the City Grove, amphitheater Seating, outdoor dining, and a mission Plaza. Access along Mission Street will open up into the Bike Hub facility. Above the Hub will be the Overlook, an expansive new public open space providing the public and employees alike with an open space for lounging and relaxation. 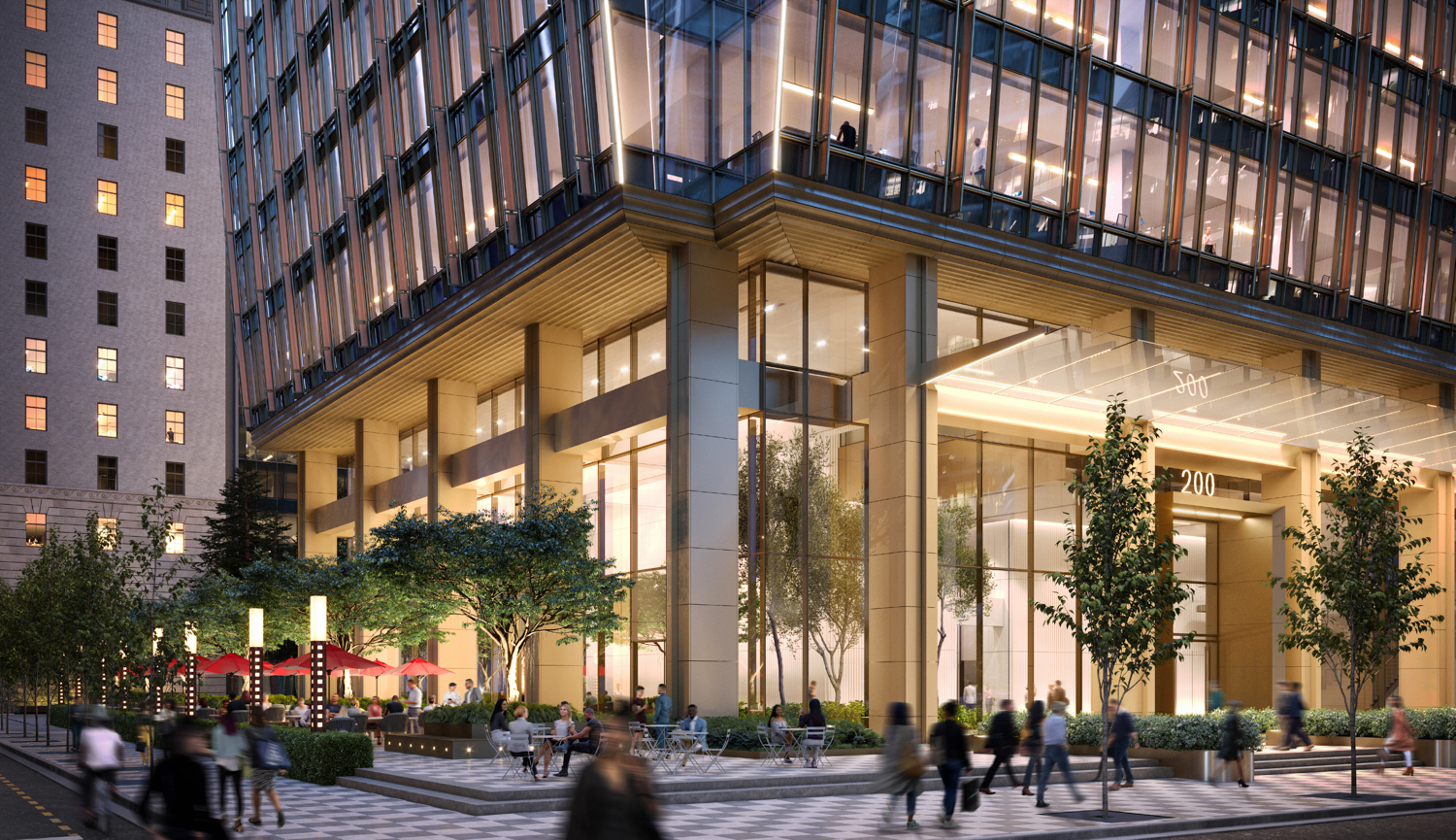 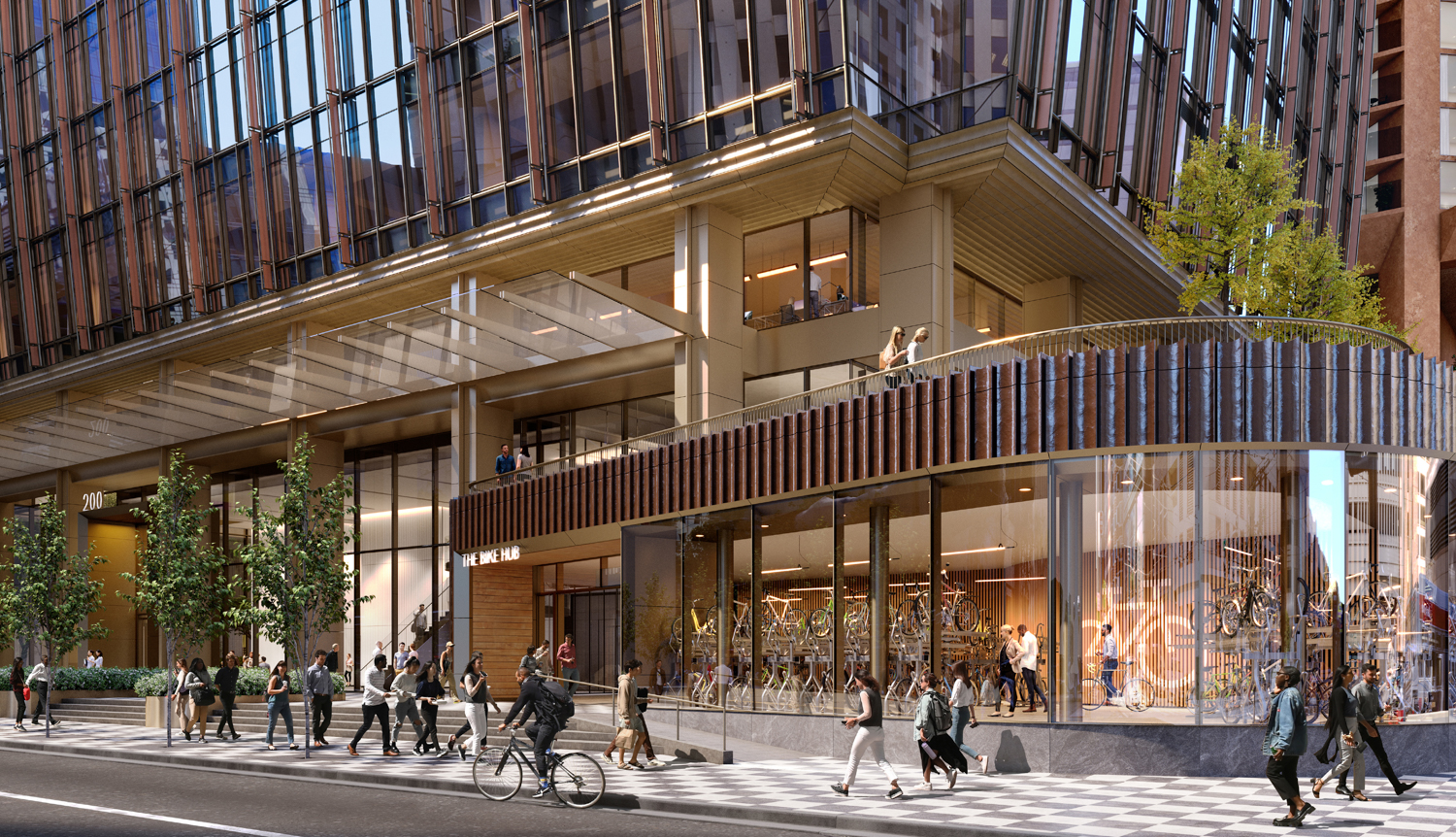 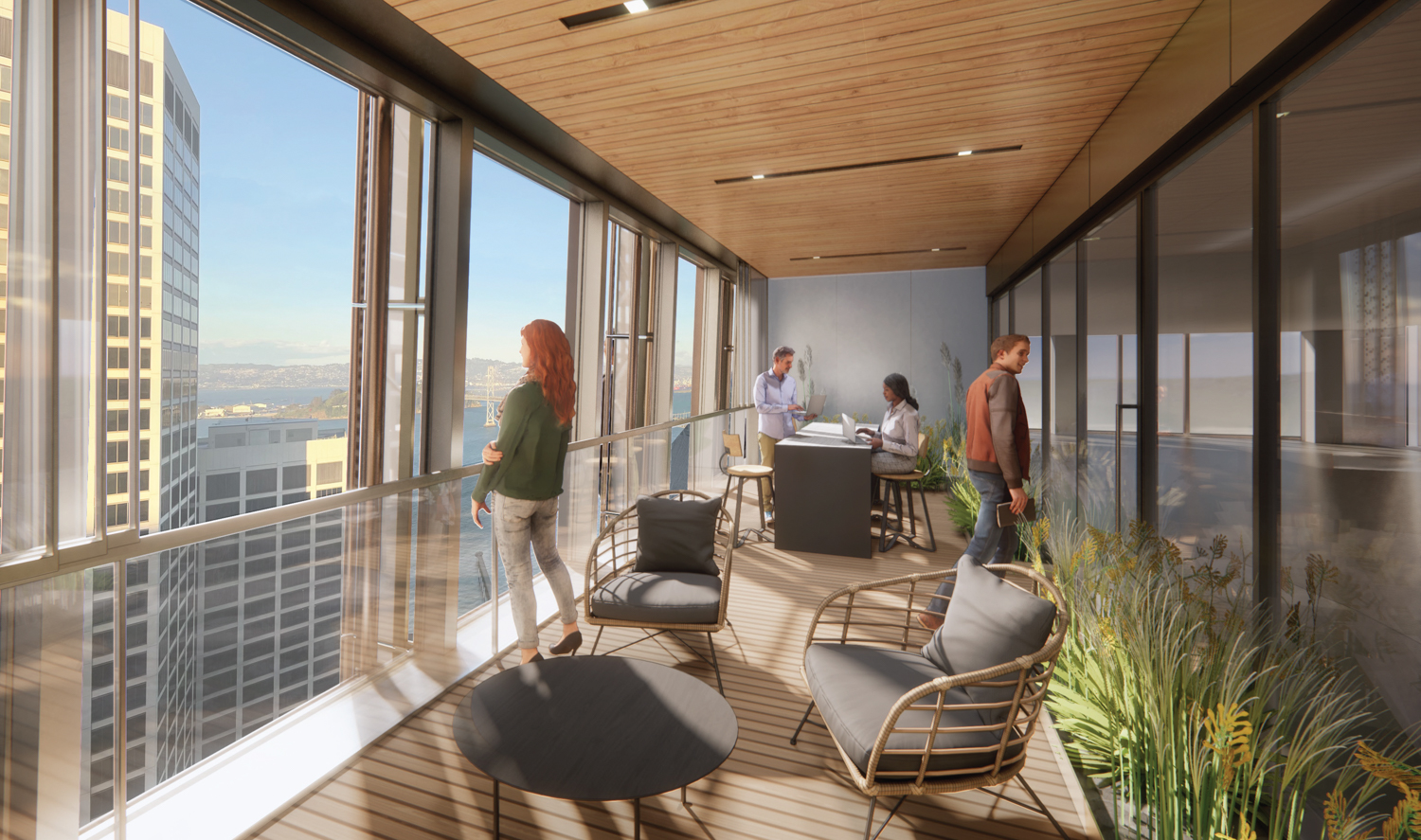 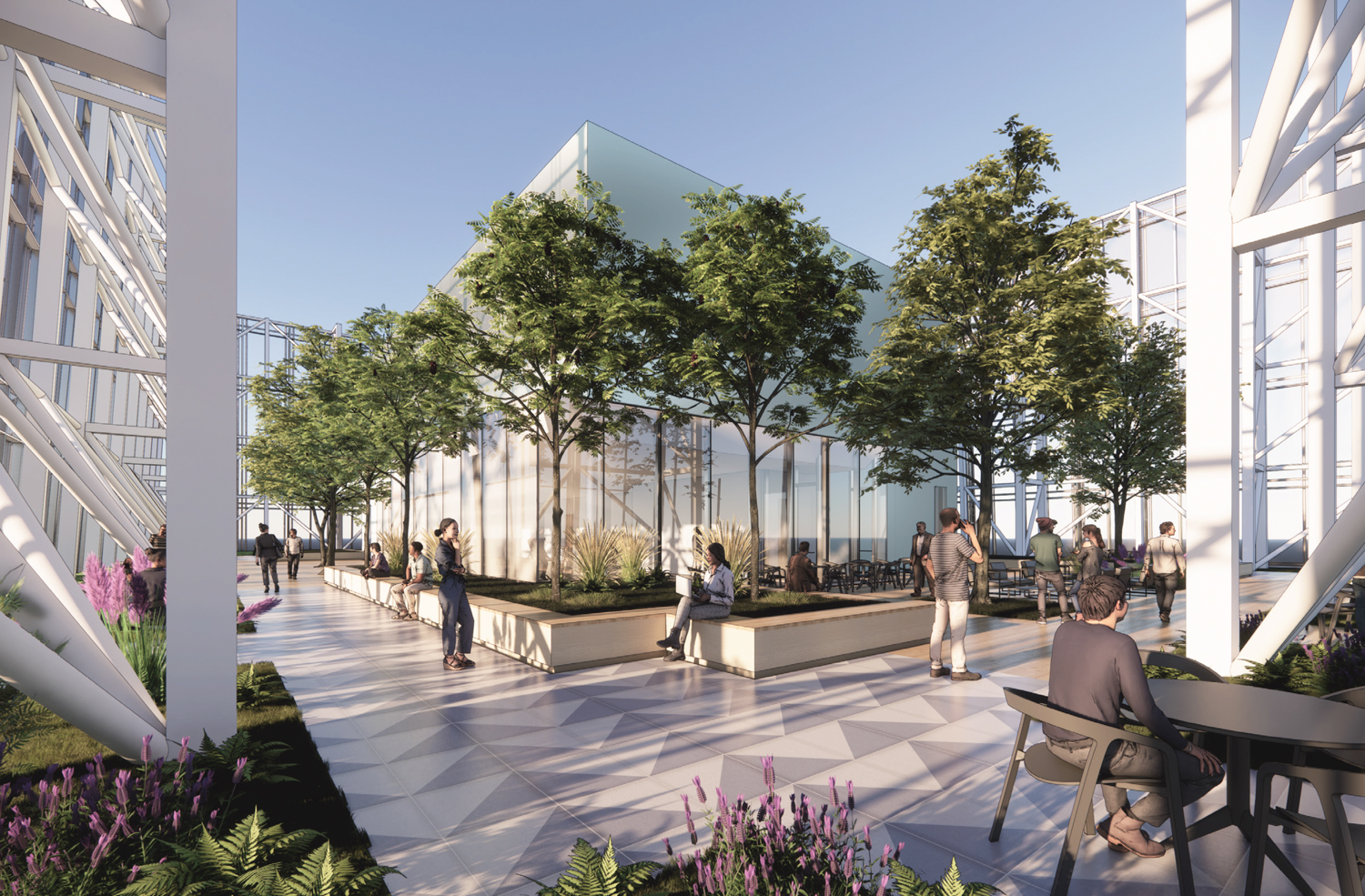 Kendall/Heaton Associates is the architect of record, with Berkeley-based PWP as the Landscape Architect. Magnusson Klemencic Associates is responsible for civil and structural engineering, Meyers+ is consulting for MEP engineering, and Persohn/Hahn Associates will be the vertical transportation consultant.

The new planning documents come less than a month after New Building and Demolition permits were filed for 50 Main Street. The new building permit estimates construction at around $180 million, a ministerial step. This preliminary figure does not include all development costs, as it will likely cost almost one billion dollars to complete. Next, the project will be submitted for review by the San Francisco Planning Commission for an informational review in the public meeting next Thursday, October 6th.

We are writing this story on Thursday, September 29th. City staff informed us that the meeting agenda will be published by the city this afternoon, Friday, September 30th.