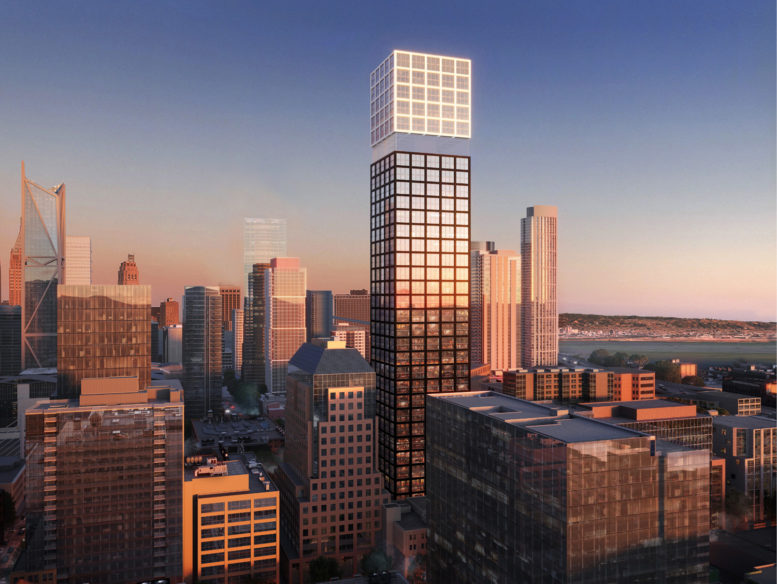 New detailed renderings have been revealed for the residential skyscraper at 620 Folsom Street in SoMa, San Francisco. The 62-story plans also disclose a significant increase in height and two hundred more homes than initially proposed. Designed by Arquitectonica, the crowning five-story feature will be what we at YIMBY have already labeled “The Cube.”

Align Real Estate is responsible for the application. The prolific firm is involved with many substantial projects across the Bay Area, including Chorus, MIRO, Prism, and Santa Clara Agrihood. 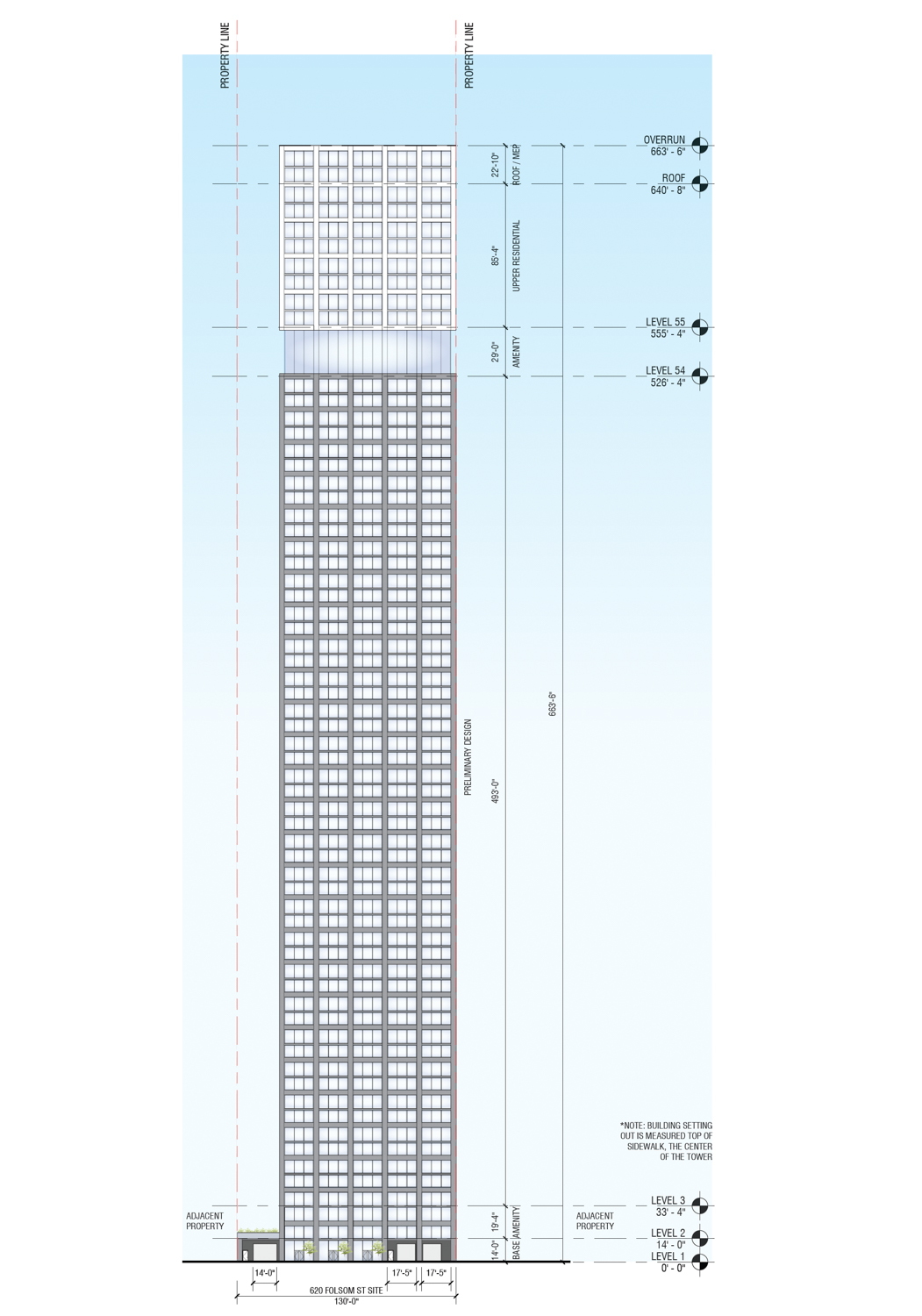 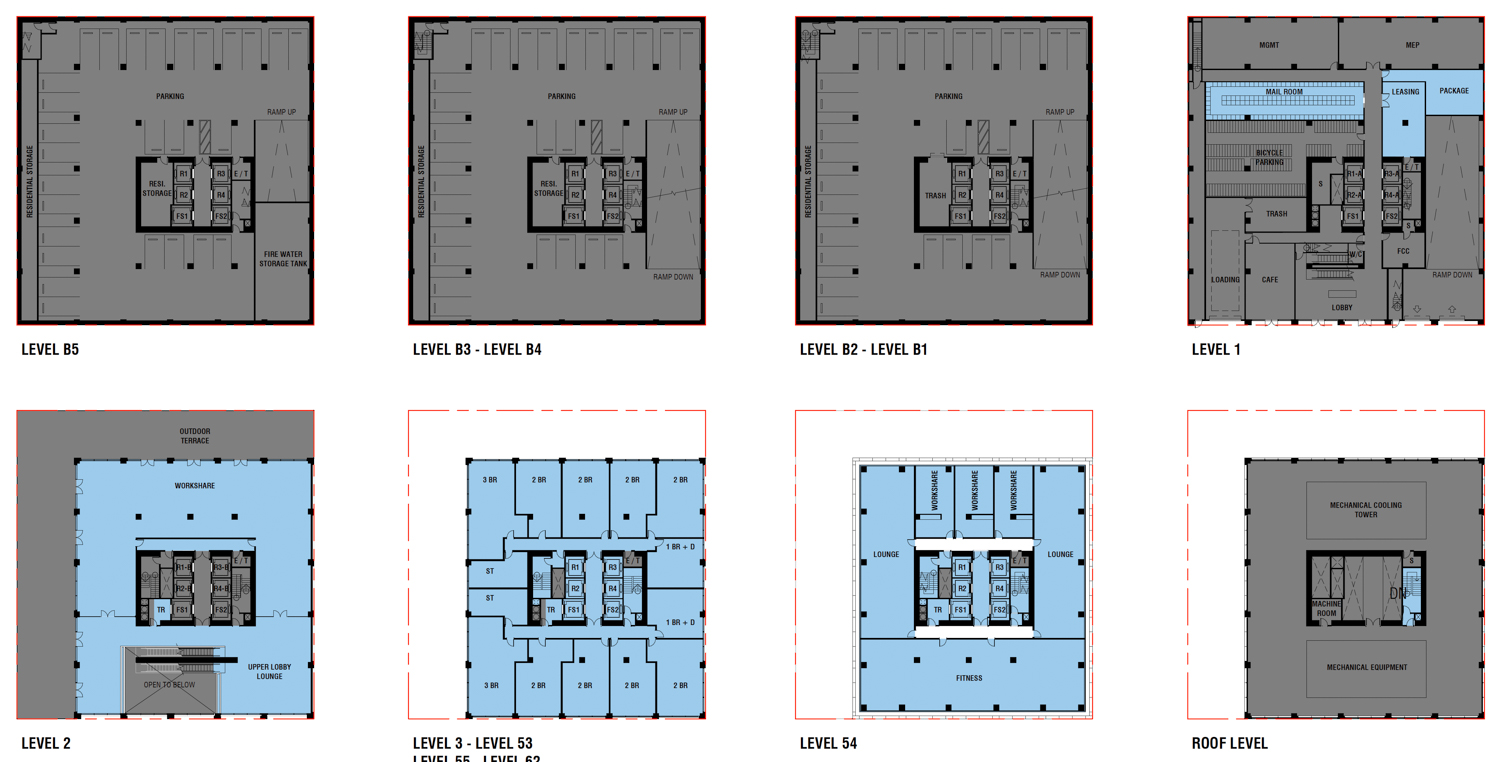 The 640-foot tall structure will yield 696,200 square feet with 674,250 square feet for housing, 5,740 square feet of common open space, and 87,750 square feet for the 133-car garage in five below-grade floors, well below city code recommendations, in a move that will promote public transit infrastructure and reduce traffic. There will be additional parking for 324 bicycles.

Arquitectonica is the project architect. The following statement comes from the studio’s entitlement application: “hovering above SOMA like a subtle glowing lantern, the building’s cubic form reflects a design that is both unique and expressive of its time, but also complementary to its historic Bay context.”

The facade will be clad with high-quality materials, including transparent and framed structural elements. The gridded exterior will rise from the base with dark grey material up to the 54th floor. The 54th-floor communal amenity deck will be wrapped with a 29-foot curtain wall skin. The amenity space will feature a fitness center, lounges, and workshare rooms. Above that, seven floors and the mechanical overrun will be wrapped with white panels. 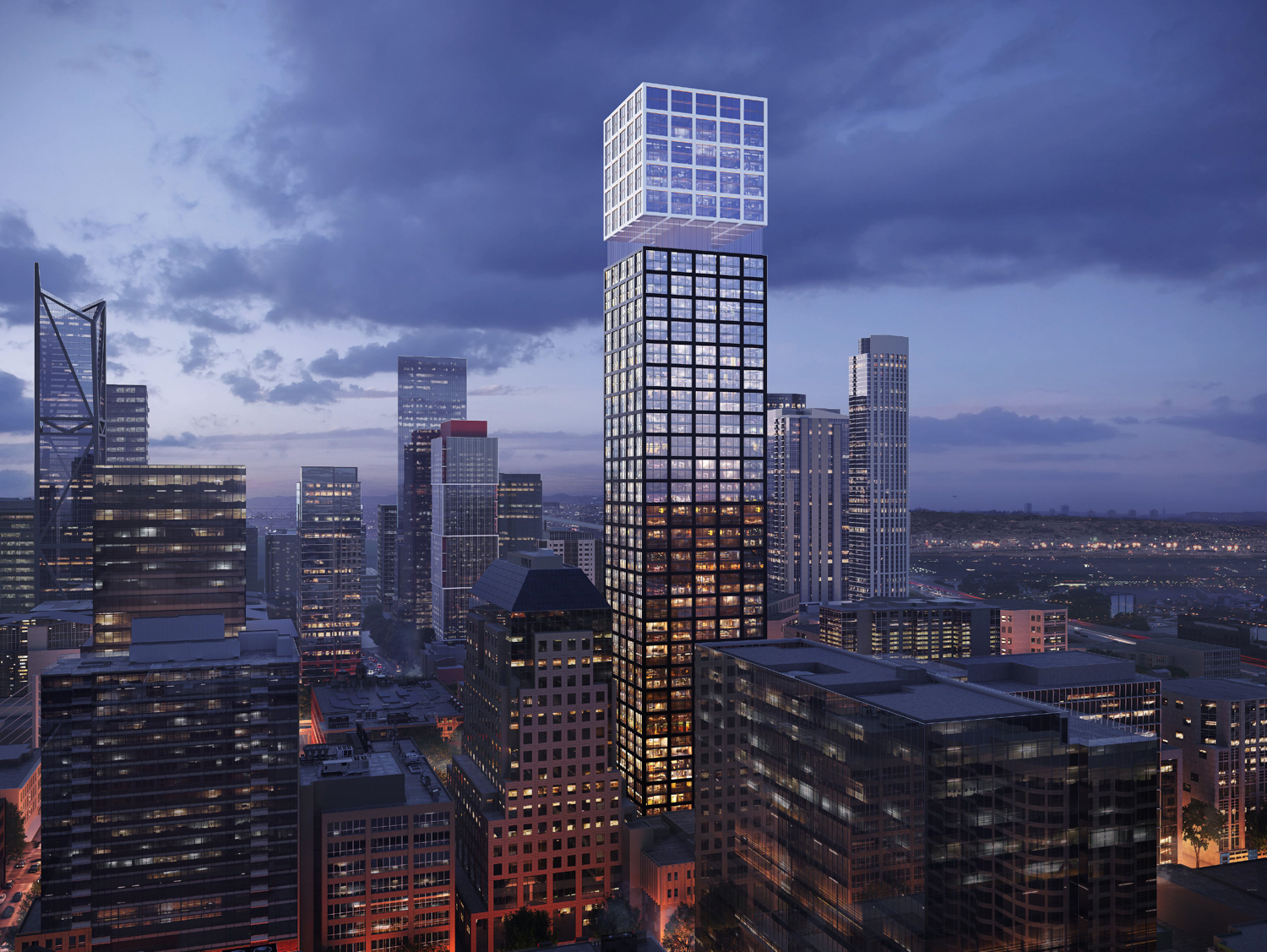 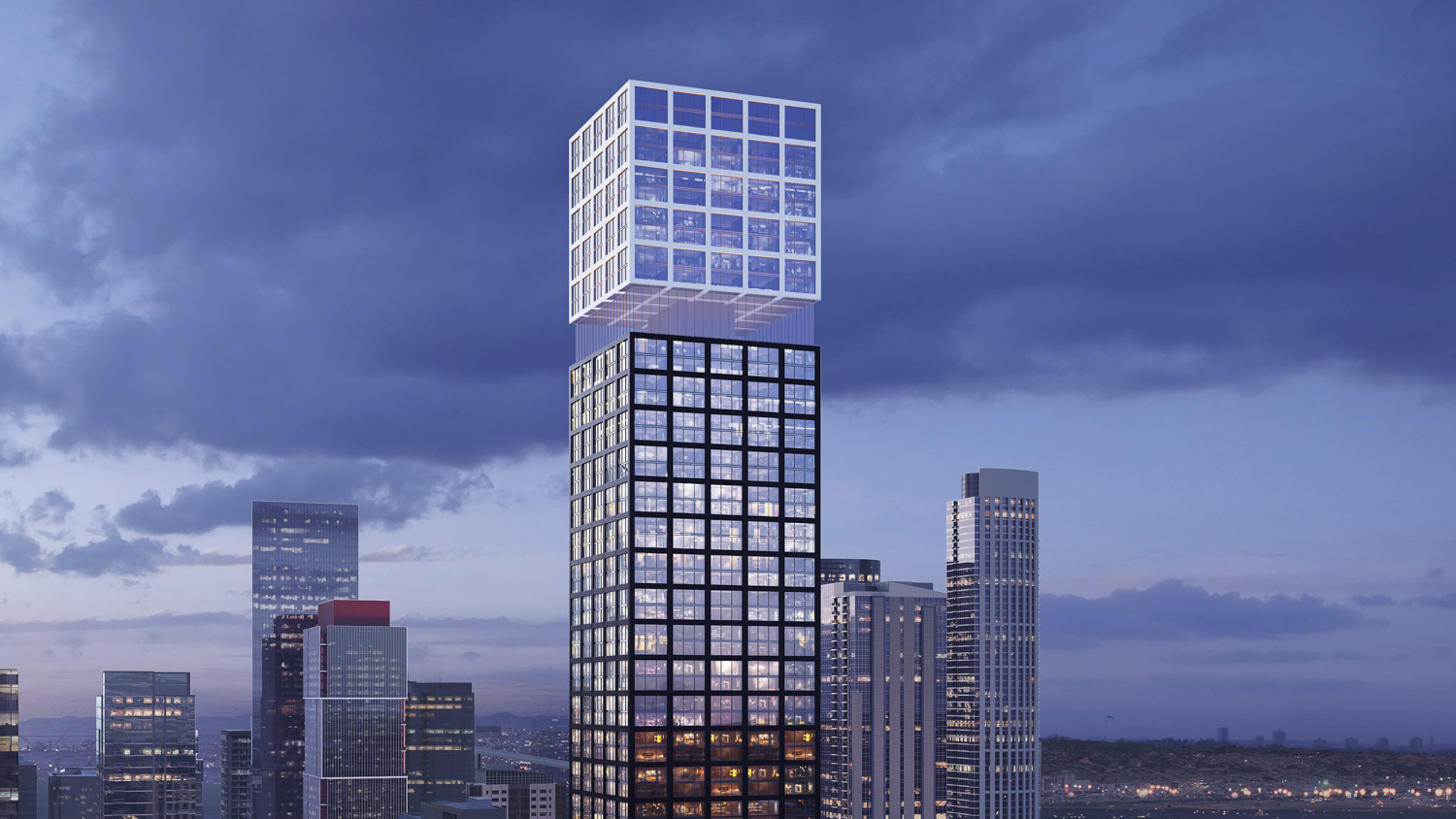 Close-up of The Cube on 620 Folsom Street, rendering by Arquitectonica 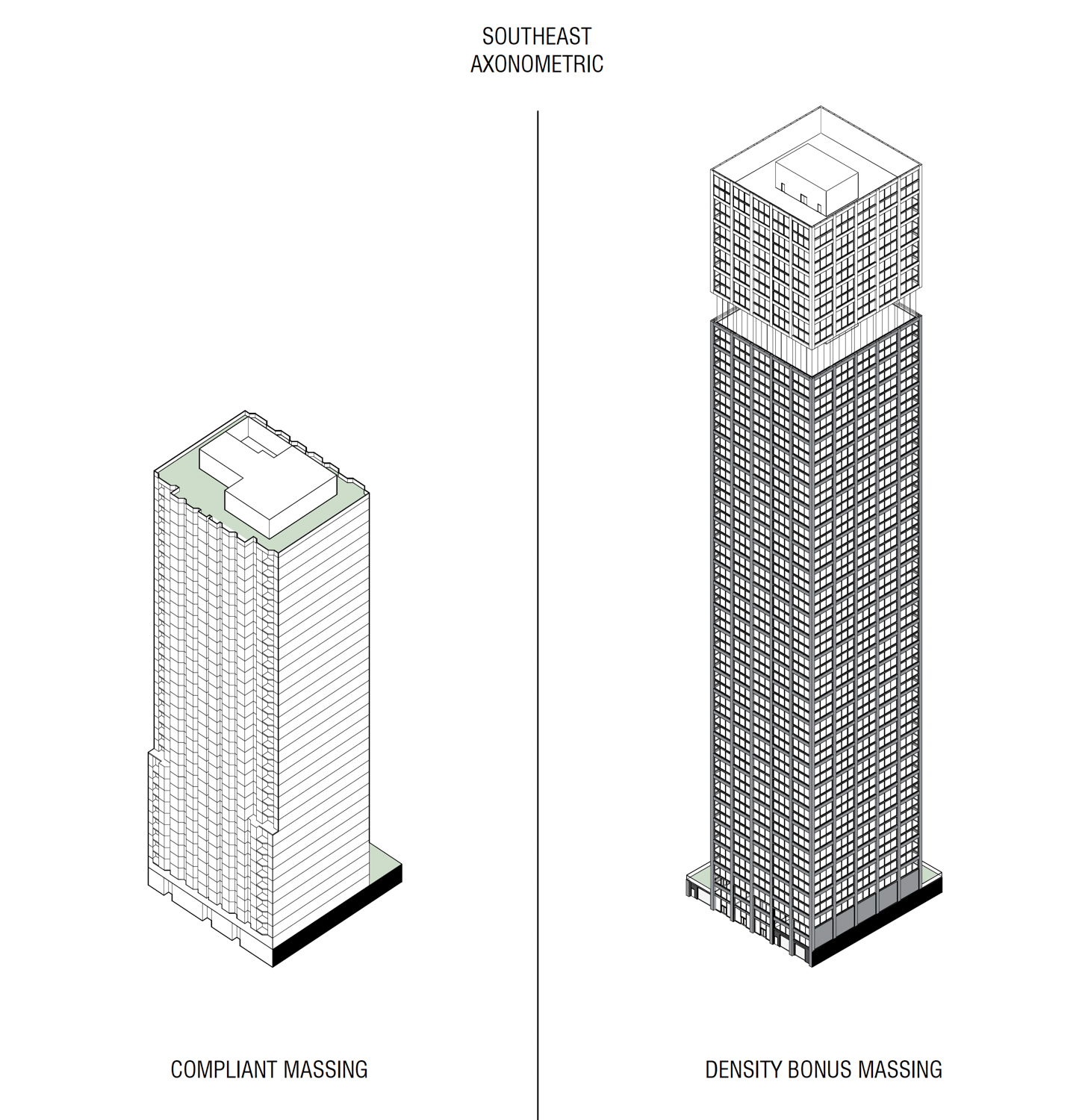 620 Folsom Street base massing compared with the Density Bonus proposal, rendering by Arquitectonica

One of the achievements that the firm’s Los Angeles studio highlights for the grid-pattern tower are that “by locating vertical circulation services in its core, the slender tower achieves pure articulation that enhances resident living spaces and configurations while providing panoramic views of the Bay.”

The project is not the first building nor the first tower designed by the Florida-based Arquitectonica in San Francisco. The firm served as the design architect for Infinity 1 luxury condominiums, which opened in 2008 and was Number 51 on SF YIMBY’s Tallest Buildings Of Bay Area 2021 countdown. Other projects include Linea, Trinity Place, and the SOMA Mission Bay Hotel. The studio is also involved with Related Santa Clara, 25 Mason Street, and 282 South Market Street in Downtown San Jose.

The ground floor will include a cafe, lobby, bicycle parking, and mail room. The sidewalk will be improved with 16 short-term bicycle racks, trees, and planters. Curb cuts will be introduced to access the loading bay and residential parking lot.

The proposal makes use of the State Density Bonus program to increase residential capacity by 50% and gain waivers for certain planning requirements. The applicant also aims to benefit from Senate Bill 330 to expedite the process. 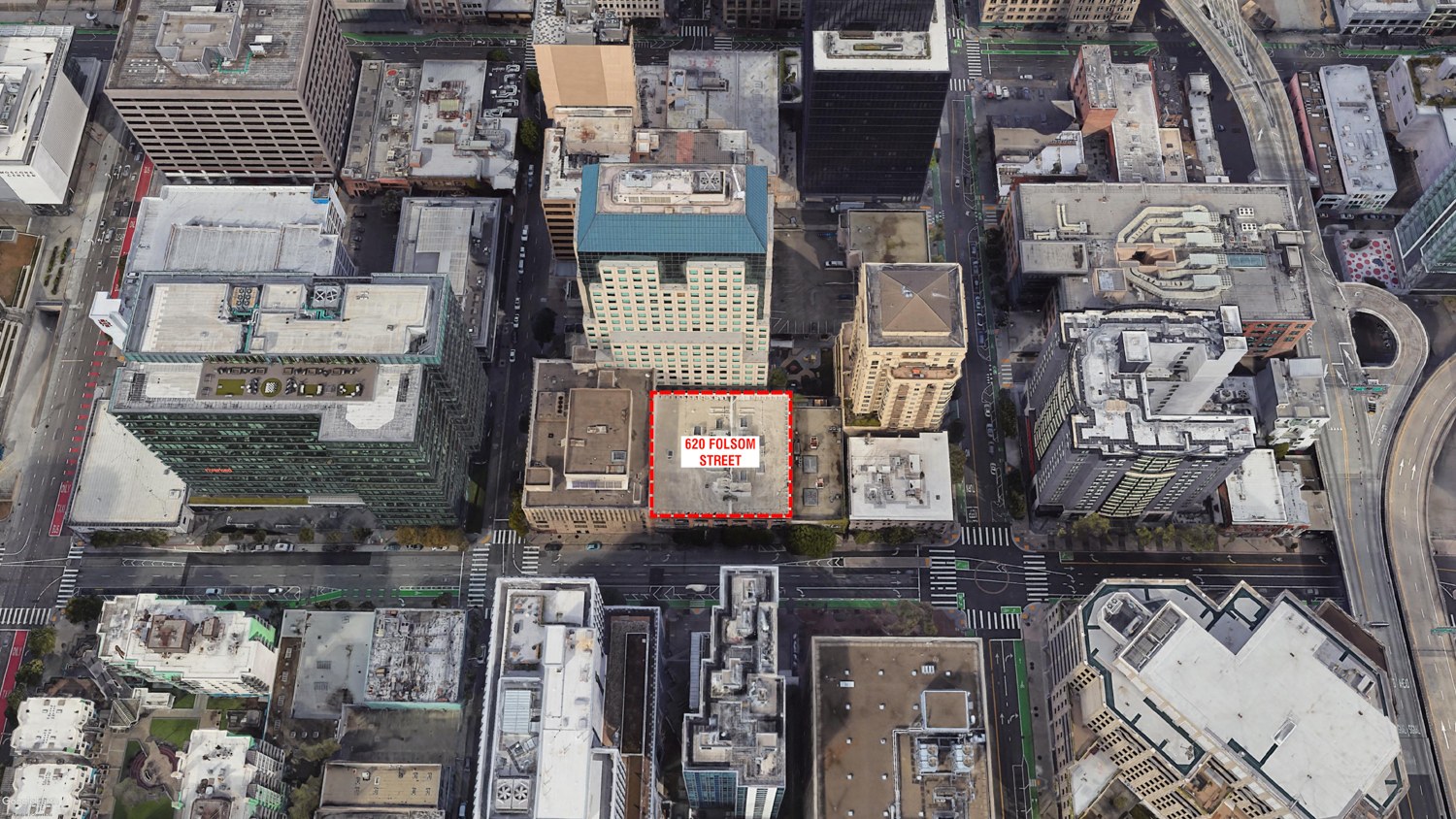 As proposed, the 640-foot tall structure would be the 10th or 11th tallest addition to the Bay Area, assuming construction of 550 Howard Street and 50 Main Street, and while uncertainty remains around the plans for the Oceanwide Center.

The project is located adjacent to the SOM-designed proposed for Holland Partner Group at 95 Hawthorne Street. Residents will be in a dense retail and transit-rich neighborhood. The Transbay Transit Center is a five-minute walk, and Montgomery Street BART station is under ten minutes away. A few bus stations will assist movement in all four cardinal directions from the plot, and the Caltrain station just under a mile south will allow residents to commute through San Mateo County to San Jose.

The planning application estimated construction would last around 36 months from groundbreaking to completion. The construction job is expected to cost at least a quarter of a billion dollars, an estimated figure not inclusive of all development costs. Demolition will be required for the existing three-story office building, clearing the 0.4-acre site.

11 Comments on "Renderings Revealed, Increased Height, and “The Cube” at 620 Folsom Street in SoMa, San Francisco"