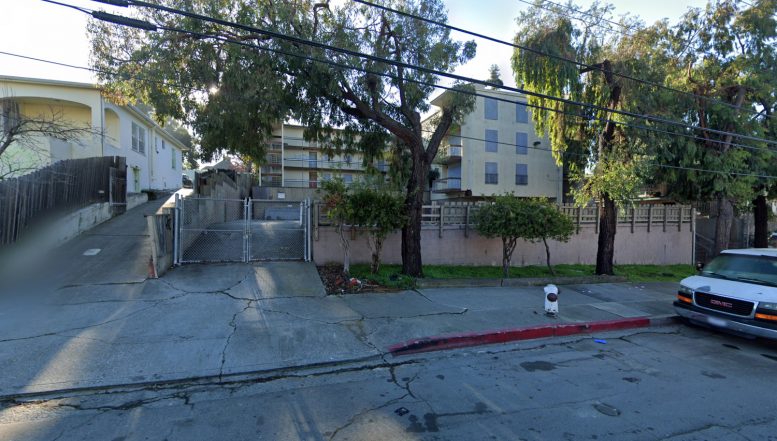 Demolition permits have been filed for a fifteen-unit former public housing building at 2530 9th Avenue, which has been in disuse since 2005 in Bella Vista, Oakland. While future construction plans do not exist yet, the Oakland Housing Authority confirmed with SFYIMBY that new affordable housing is highly anticipated. The application was filed by the California Affordable Housing Initiative, also known as CAHI.

Conceptual illustrations exist from prior development plans on 2530 9th Avenue. Gutierrez Associates have published a five-story multi-unit complex with an on-site parking garage. The firm describes the draft as maximizing the site, offering amenities, and integrating contemporary design.

Reached for comment, the Oakland Housing Authority’s Assistant Director of Communications, Greer McVay, confirmed with SFYIMBY on CAHI’s behalf that they anticipate the property will host future development, though the details have not been finalized. The following two passages will relay what is shared with SFYIMBY.

McVay: “For several years, a local nonprofit developer and a community land trust worked in partnership to assemble financing to rehabilitate the existing buildings. The rehabilitation was determined to not be feasible because they were unable to assemble the necessary funding due to the condition of the buildings. CAHI intends to demolish the buildings and redevelop the site, possibly with a nonprofit developer partner, in consultation with neighbors and community stakeholders.

“CAHI does anticipate that new affordable housing will be developed on the site and will seek community input on the design and programming for future development. An architect has not yet been engaged because CAHI may ultimately select a nonprofit developer who would then contract with the architect.”

A timeline for construction is not established yet.

The address is nearby the Friends of Bella Vista Park and Elementary School. Residents will be five minutes from Lake Merritt and ten minutes from the Lake Merritt BART Station by bicycle. Also nearby, the 3,100-unit Brooklyn Basin multi-structure mega-development currently under construction.

Be the first to comment on "Demolition Permits Filed for the Vacated 2530 9th Avenue, Bella Vista, Oakland"