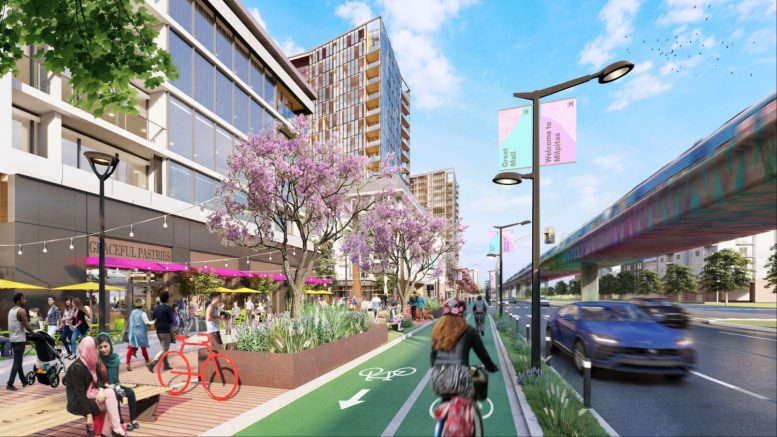 Great Mall Parkway view, rendering via the City of Milpitas

The City of Milpitas is encouraging the public to comment on a new draft plan to rezone portions of the city, the Milpitas Metro Specific Plan. MMSP would establish five new districts around the city’s BART Station, which opened in June of 2020. Full build-out could produce roughly seven thousand apartments, two and a half million square feet of office space, light industrial space, retail, and hotels to be built by 2040. 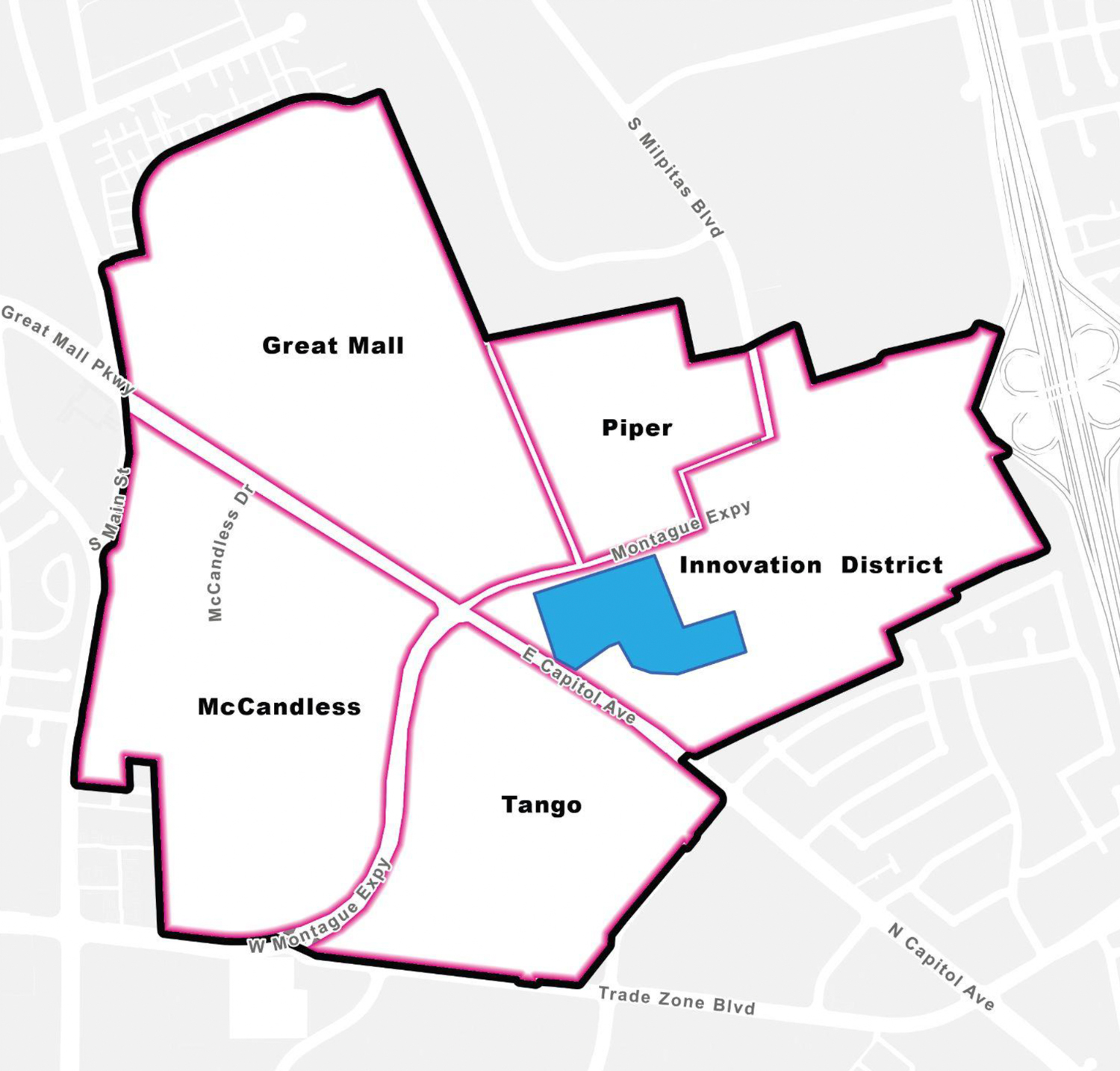 The goal of the specific plan is to establish mixed-use neighborhoods around the Santa Clara County city’s new public transit. The planning process started in March of 2020 and is expected to be adopted by the City Council in the Spring of next year.

The Five Districts for rezoning include the Great Mall, Innovation District, Piper, Tango, and McCandless.

The most impactful district is expected to be the Great Mall, which could see 3,500 dwellings, 500,000 square feet of office space, 250,000 square feet of retail, and a 350-room hotel on-site. Two options include developing only surface parking lots or redeveloping surface parking and a portion of the existing mall. The Great Mall redevelopment concept can be compared to Brookfield’s $2 billion proposal for Stonestown Mall in San Francisco. 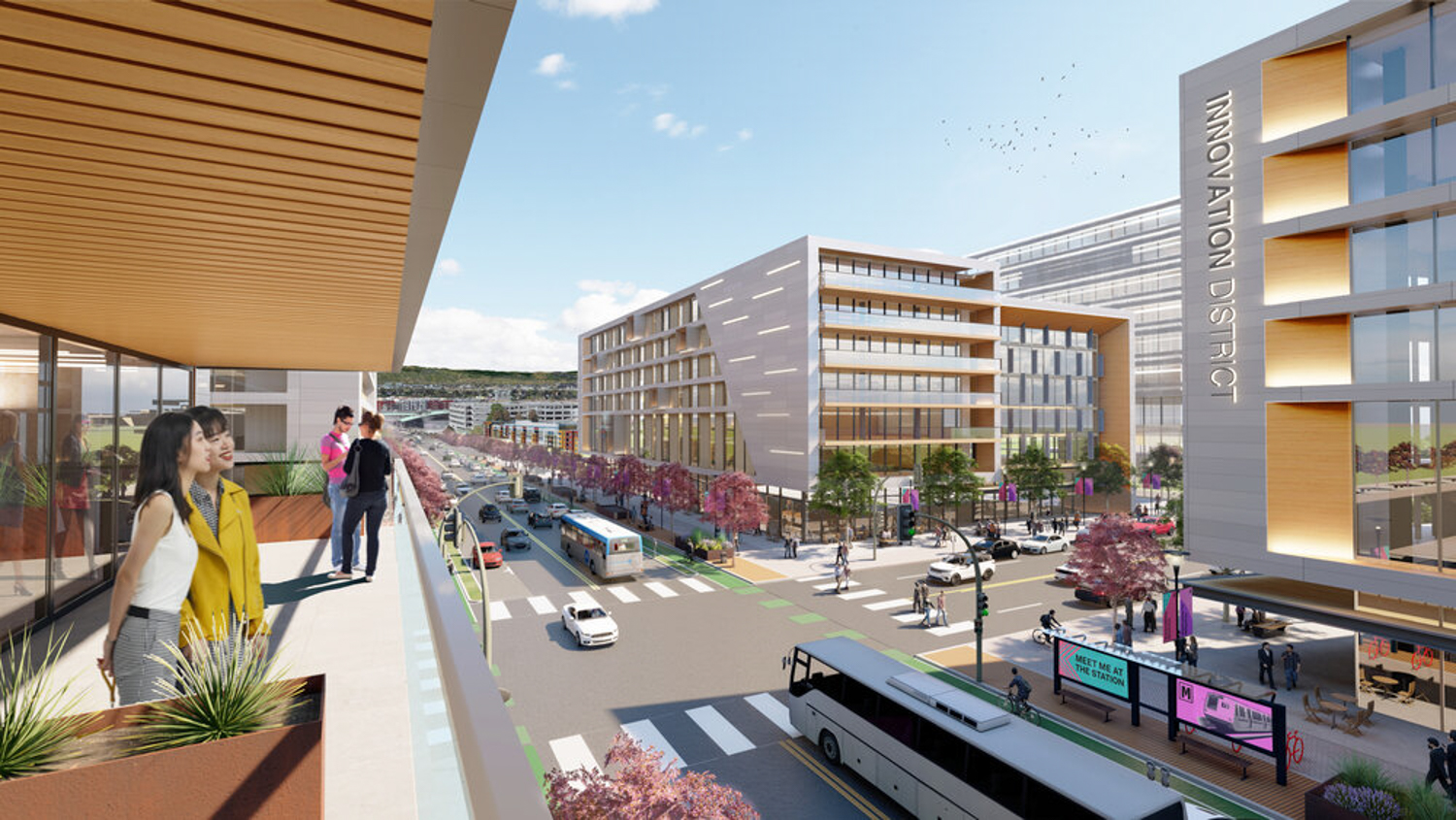 Innovation District, rendering via the City of Milpitas

The Innovation District would focus on the commercial development at Montague Expressway and South Milpitas Boulevard. The district could see 1,000 new apartments, 1.8 million square feet of office space, 500,000 square feet of light industrial use, 40,000 square feet of ground-level retail, and another 350-room hotel. 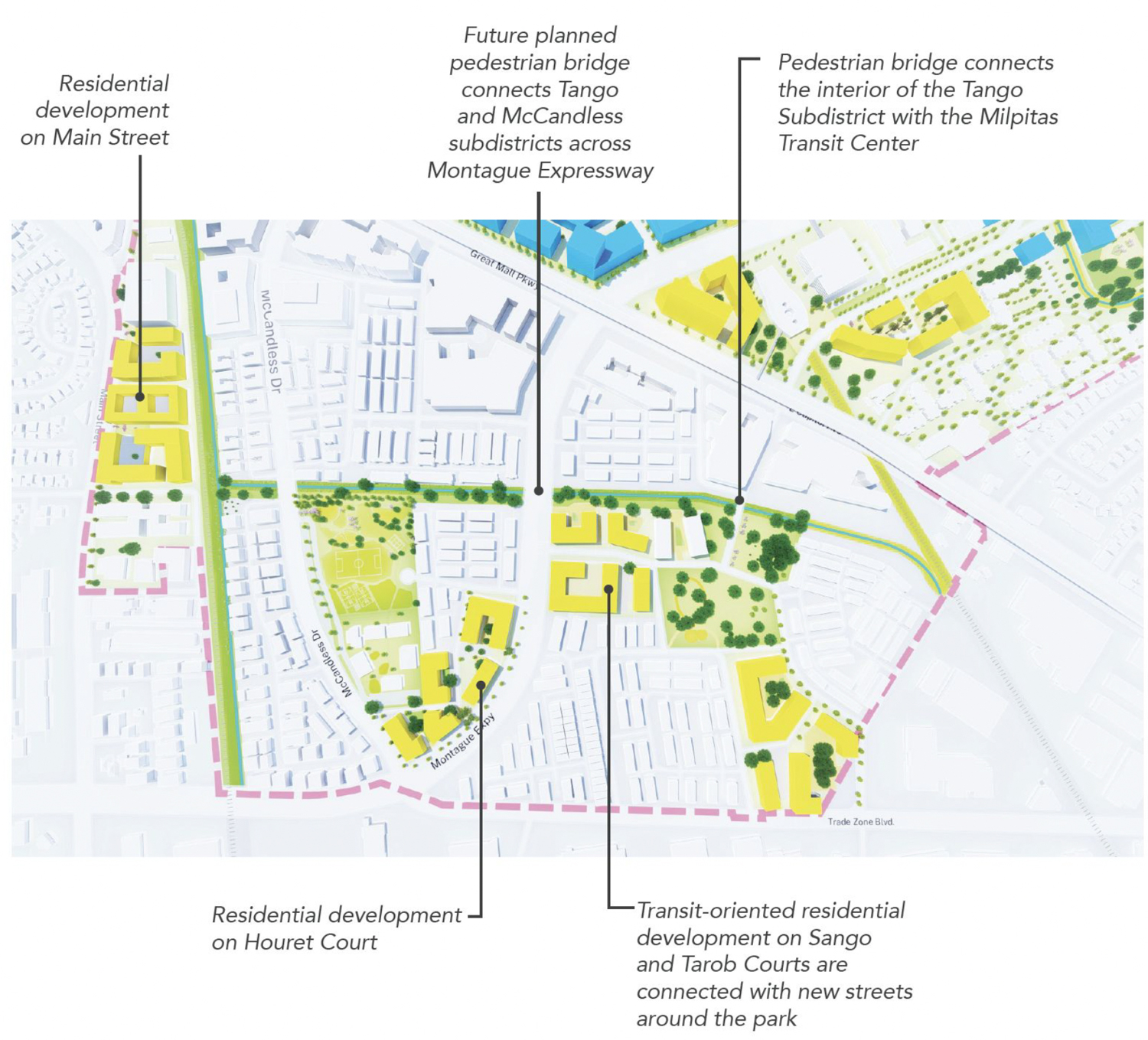 Milpitas Metro Specific Plan site map for McCandless and Tango, illustration via the City of Milpitas 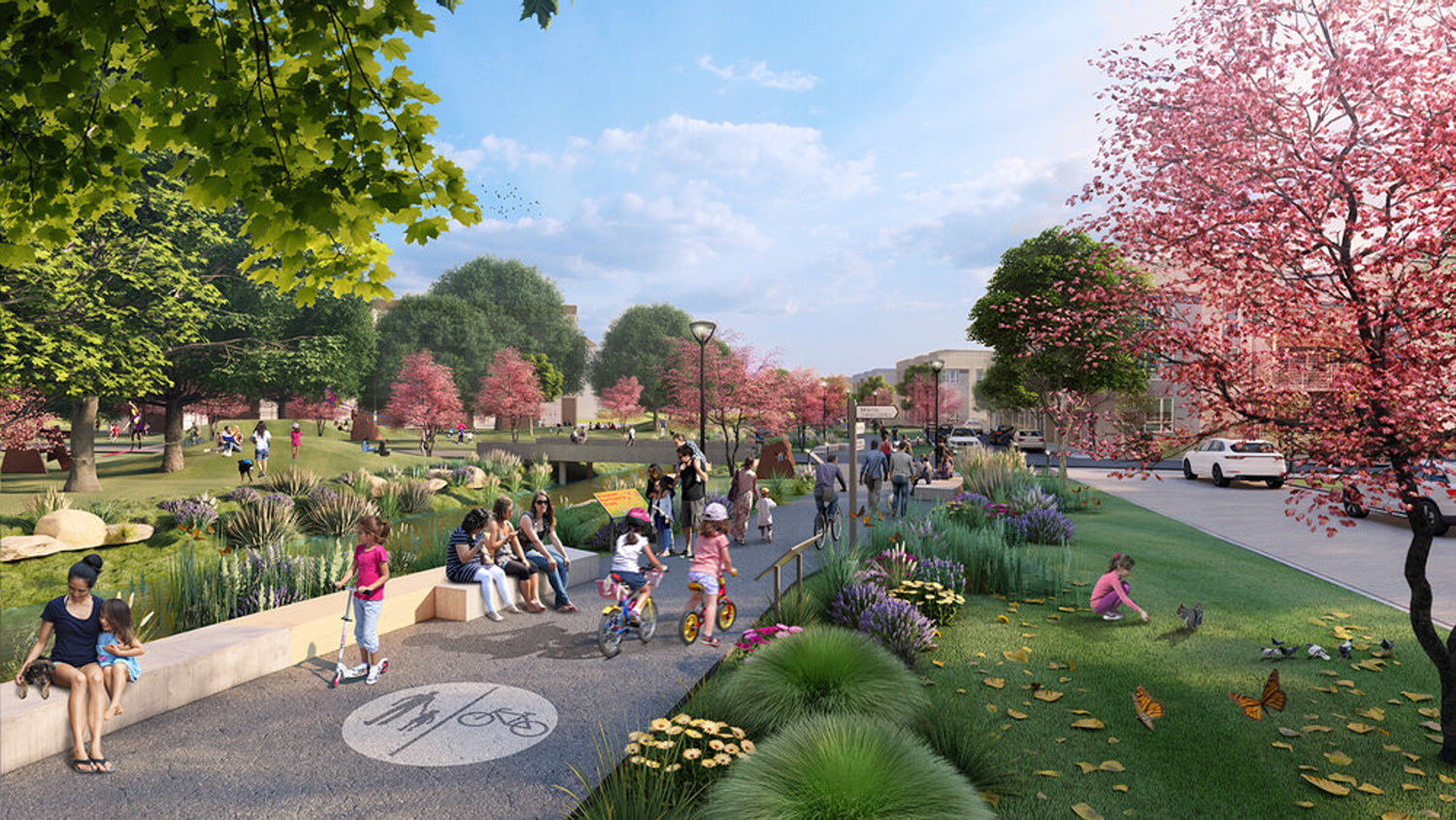 MMSP comes in the shadow of the Association of Bay Area Governments, suggesting that the predominantly suburban town needs to approve 6,713 new homes by 2031. As reported by Grace Hase for the Milpitas Beat, the city has been lagging behind state-mandated housing goals mandated by the Regional Housing Needs Assessment, i.e., RHNA. Of the 6,713 homes, 2,655 units must be reserved as affordable housing. 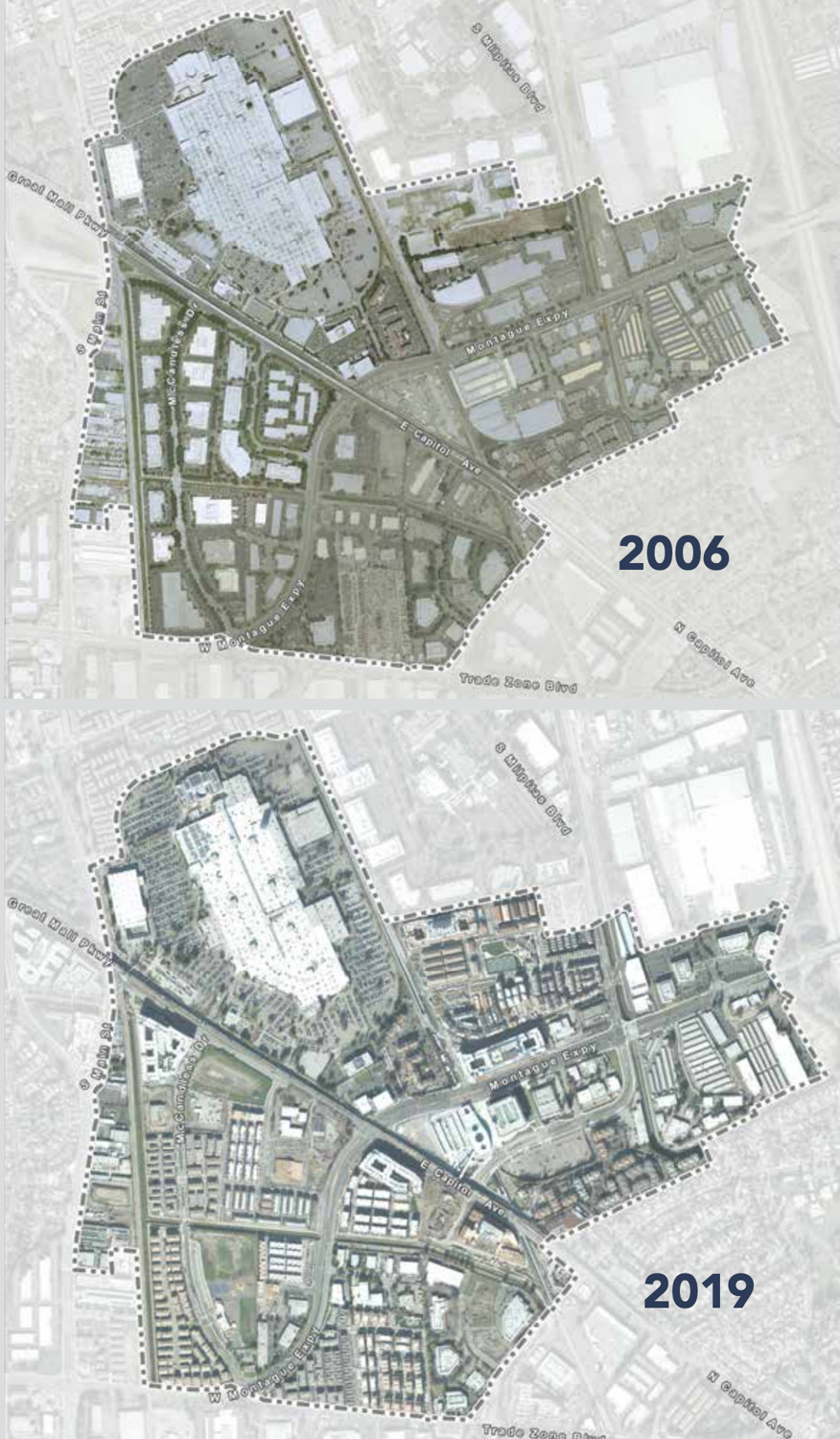 Milpitas Metro area comparison between 2006 and 2019 of construction progress, image via the City of Milpitas using Google Earth imagery

The city has had past success with building market-rate housing but has lagged in affordable housing production. The existing Transit Area Specific Plan, formed in 2008, has seen 6,955 units entitled by 2017, along with an admittedly disappointing 186,500 square feet of retail and 10,630 square feet of office space.

The city mayor, Rich Tran, shared with The Beat, “I understand where they’re coming from and the need for housing in California, but I think there’s a lot of challenges to approving that number of housing units,” he said. “I think that comes down to real estate developers and whether they want to develop housing.” 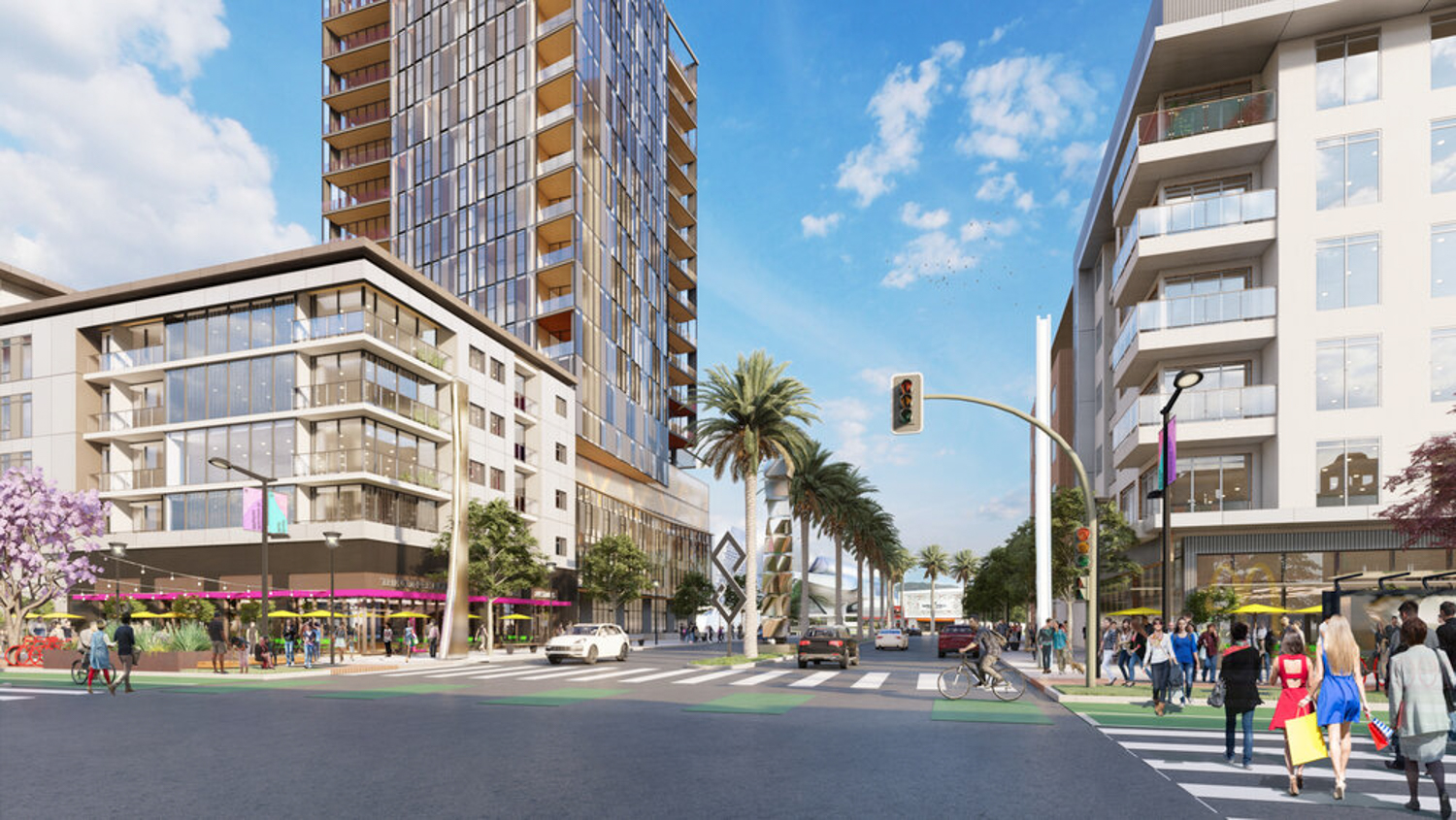 Great Mall intersection, rendering via the City of Milpitas

The city will hold a live meeting with the public via Zoom on Monday, October 25th, between 6 and 8 PM. After that, the draft MMSP will be open for public comment until November 8th. For information about the MMSP or how to participate in the meeting, see the Milpitas Metro website here.

Be the first to comment on "Milpitas Considering Zoning for 7,000 Apartments in Transit-Oriented Plan"