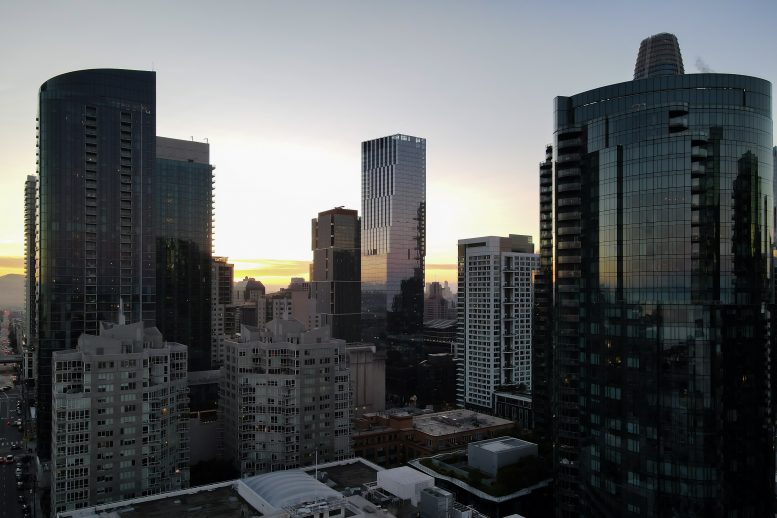 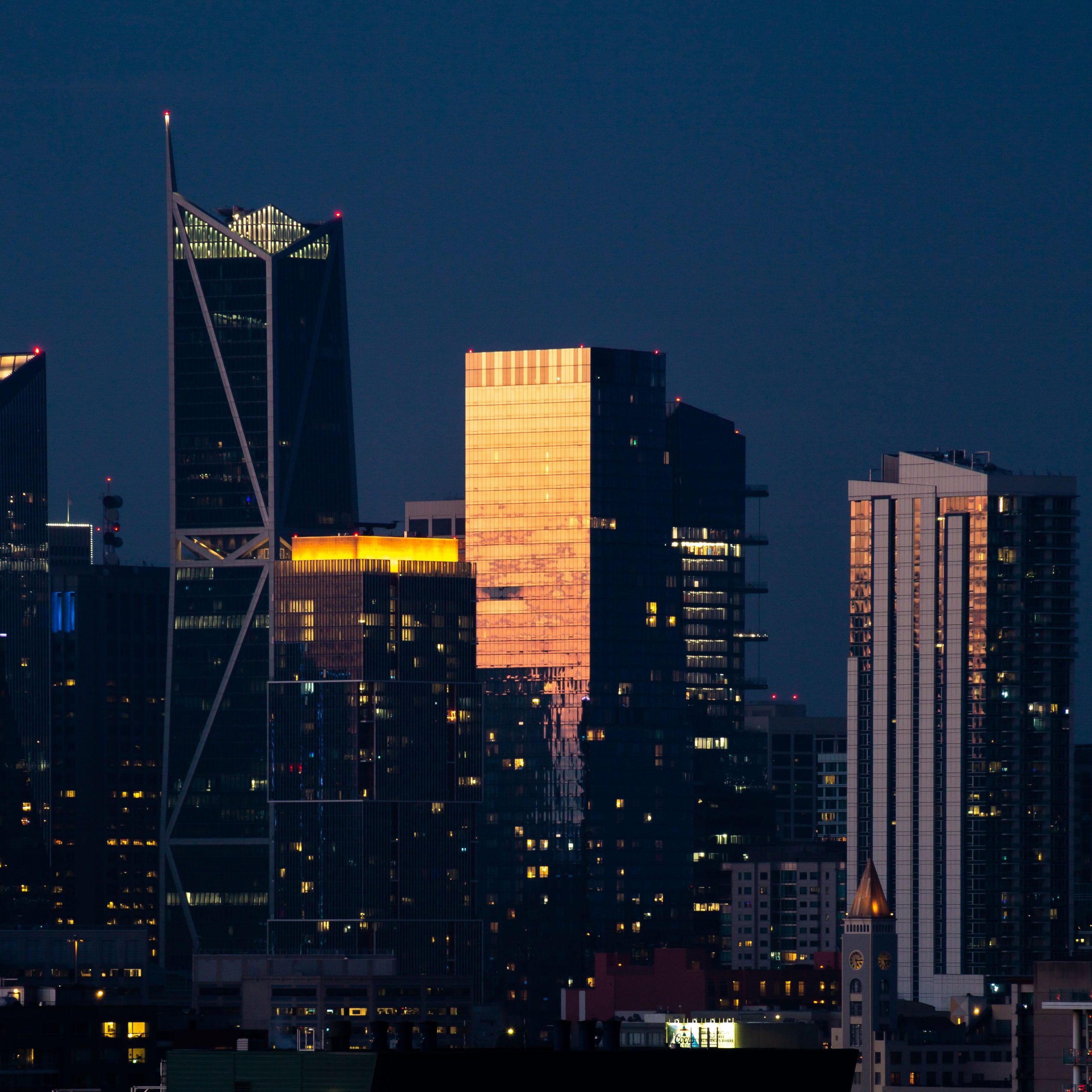 The Avery at sunset, image by Andrew Campbell Nelson 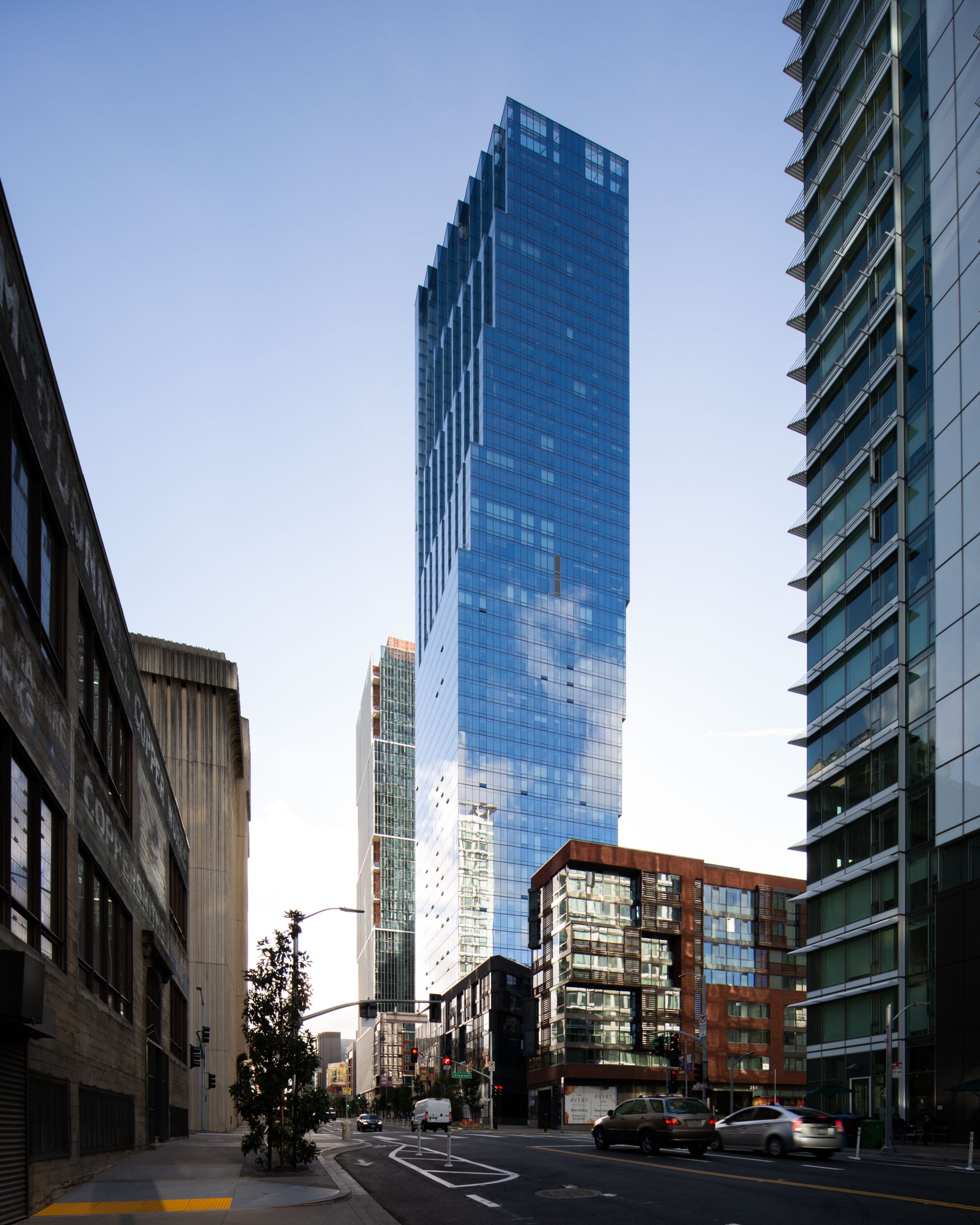 The 56-story building contains 906,470 square feet to produce 548 residential units across 732,500 square feet and 17,000 square feet of community-focused retail. A diagonal ground-level paseo named Avery Lane divides the podium and tower with public open space. There is a total of 18,250 square feet of ground-floor open space and 11,290 square feet of terraces, including a rooftop view. Parking is included for 196 bicycles and 218 vehicles across 111,293 square feet. 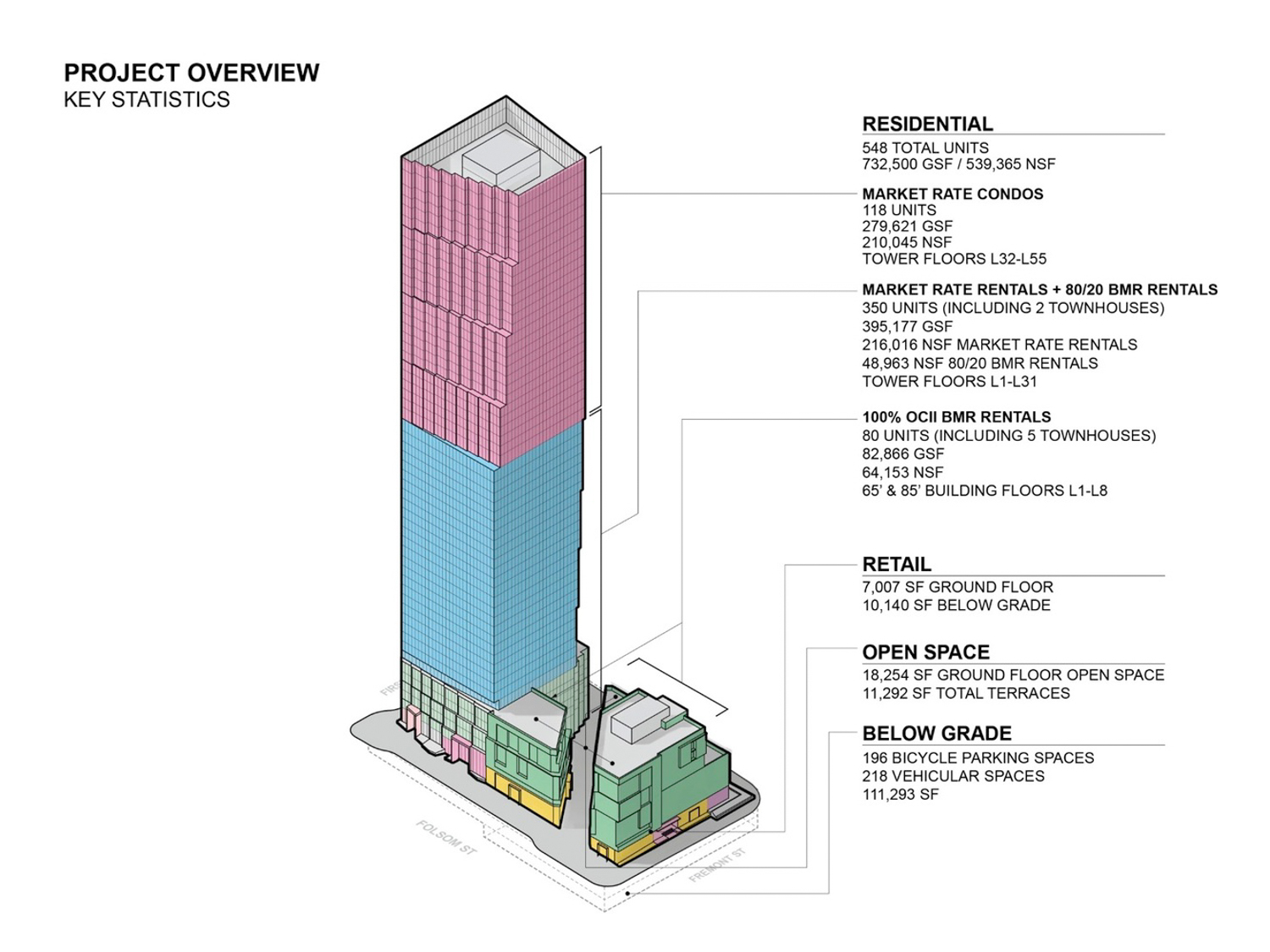 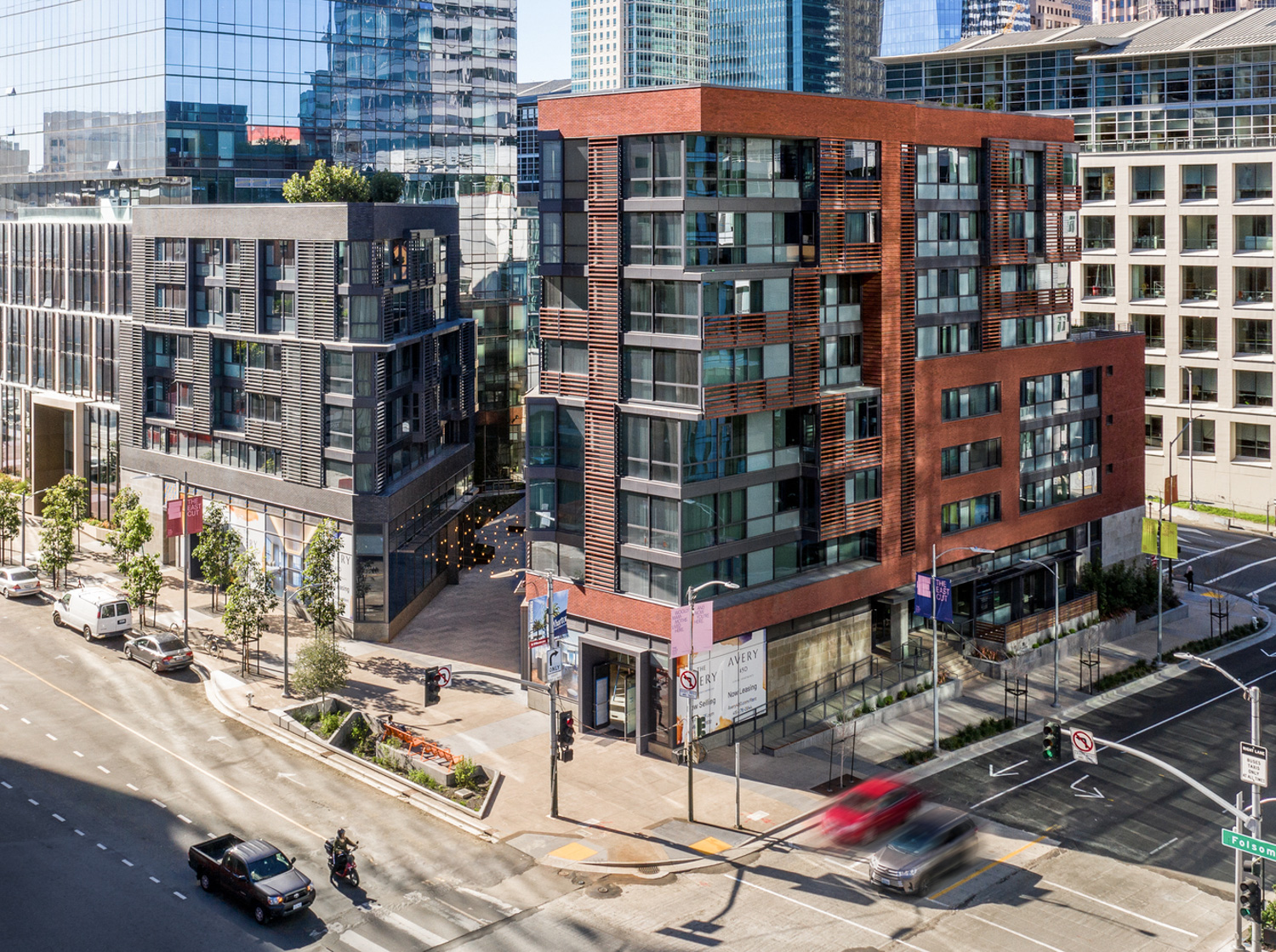 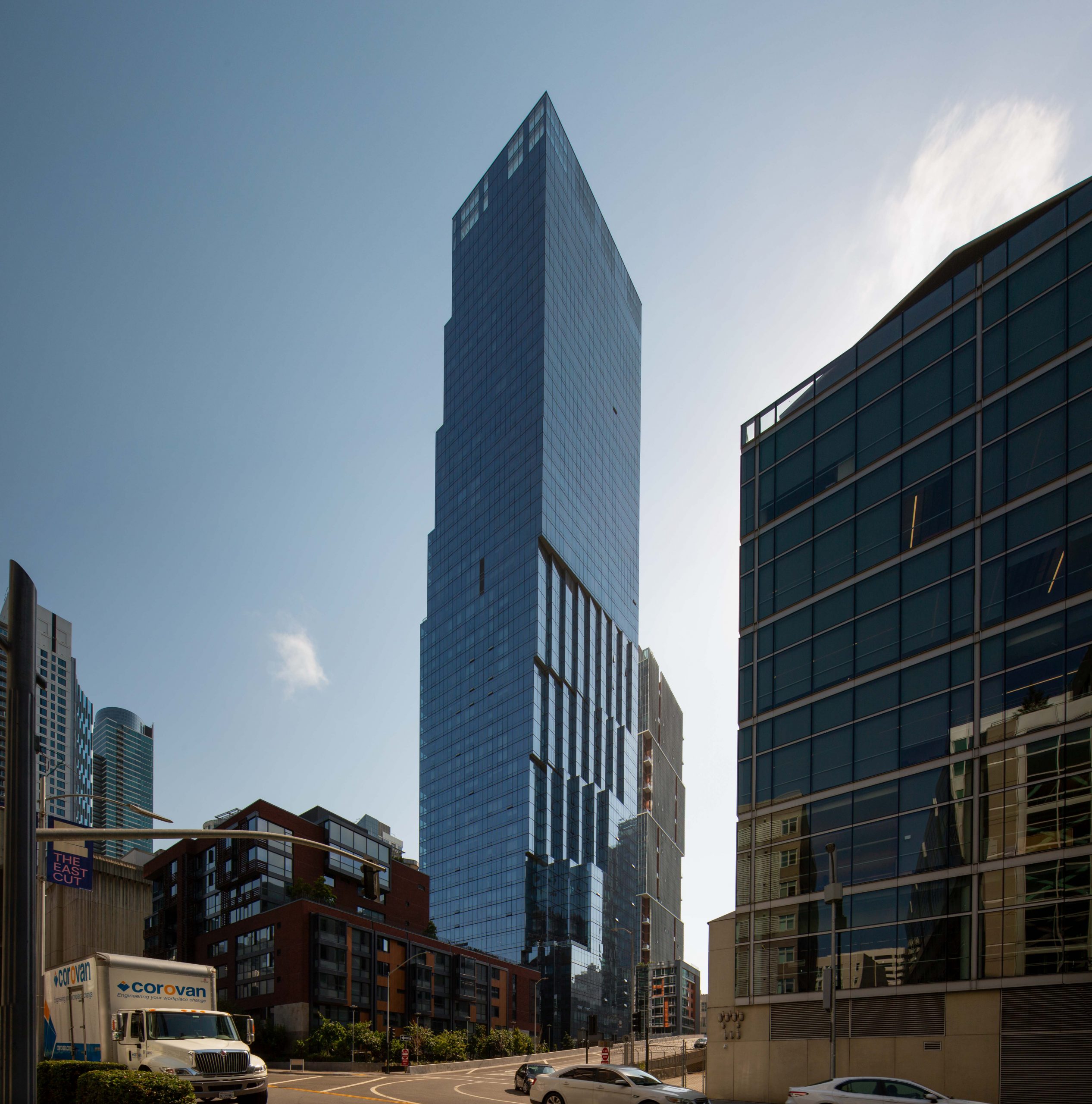 The Avery seen from Fremont Street and I 80 Freeway exist, image by Andrew Campbell Nelson 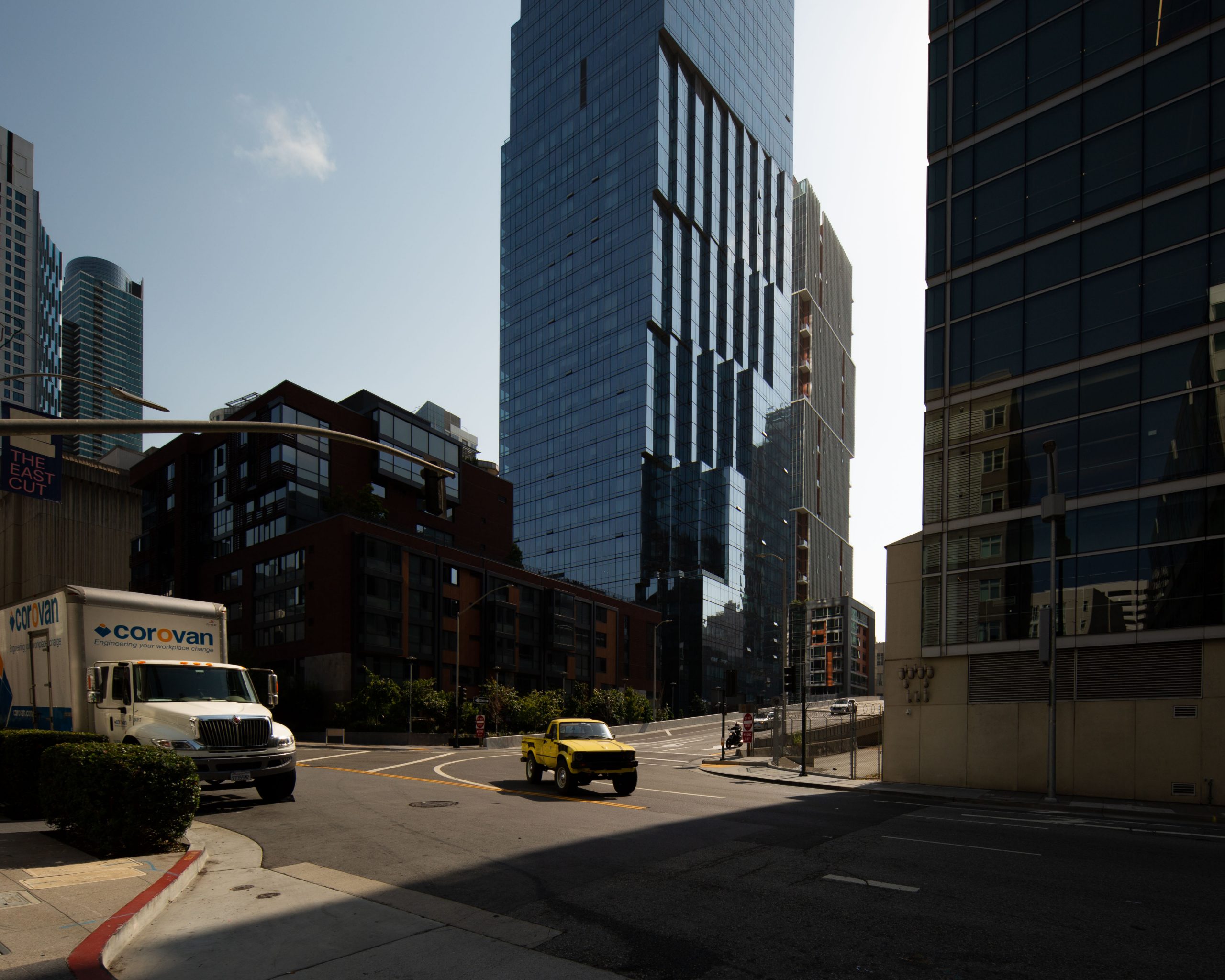 The Avery podium seen from Fremont Street and I 80 Freeway exist, image by Andrew Campbell Nelson

The diagonal paseo, Avery Lane, serves as the design impetus for the sculpted tower. The tapered facade provides a bounty of corner-window views for the apartments and condominiums. As OMA writes, “at the 33rd Floor, above the datum established by adjacent buildings, the south face of the building is sculpted to mirror the stepped façade at the north. As on the north face, the tapering façade on the south is expressed as a series of steps or crenellations.” 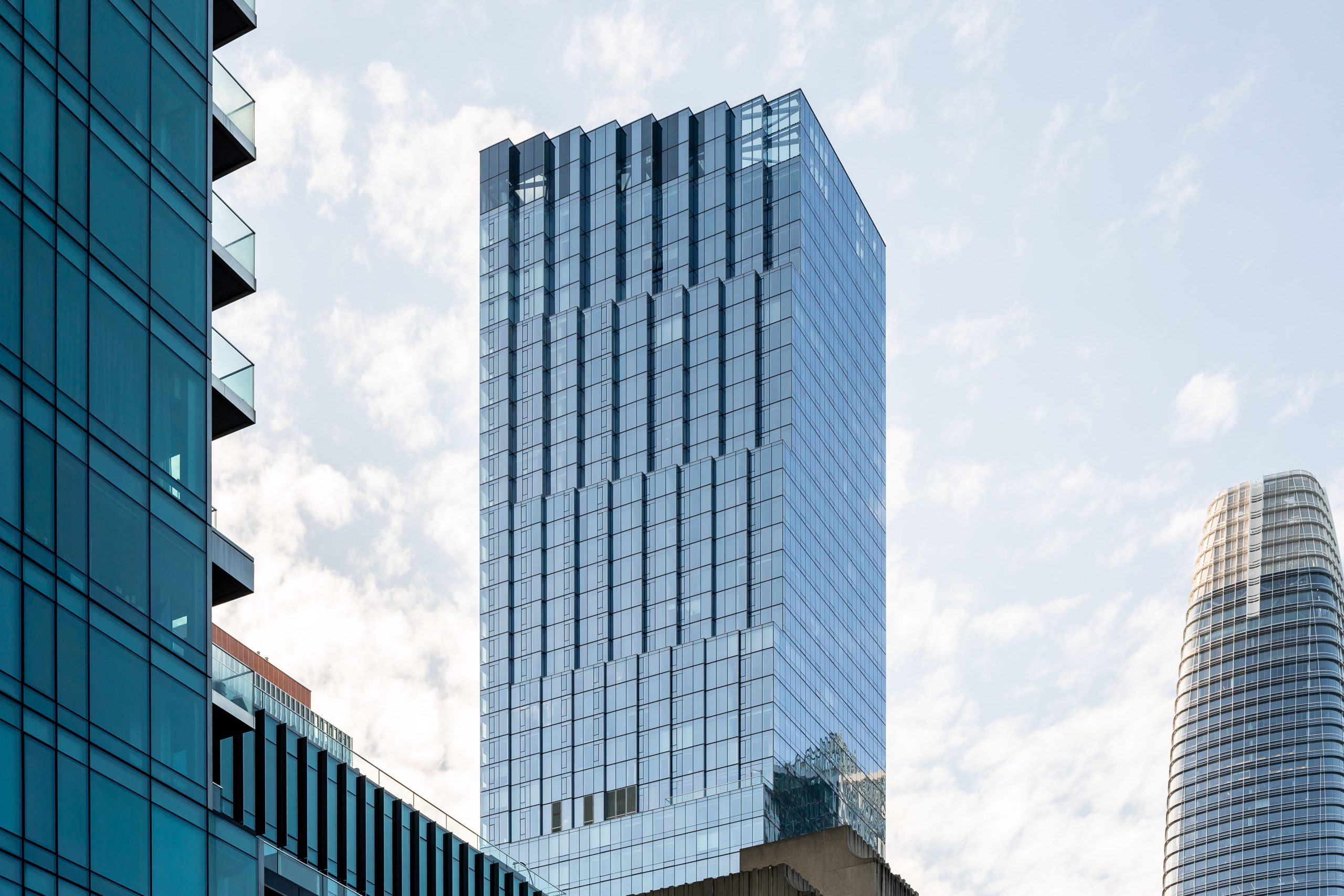 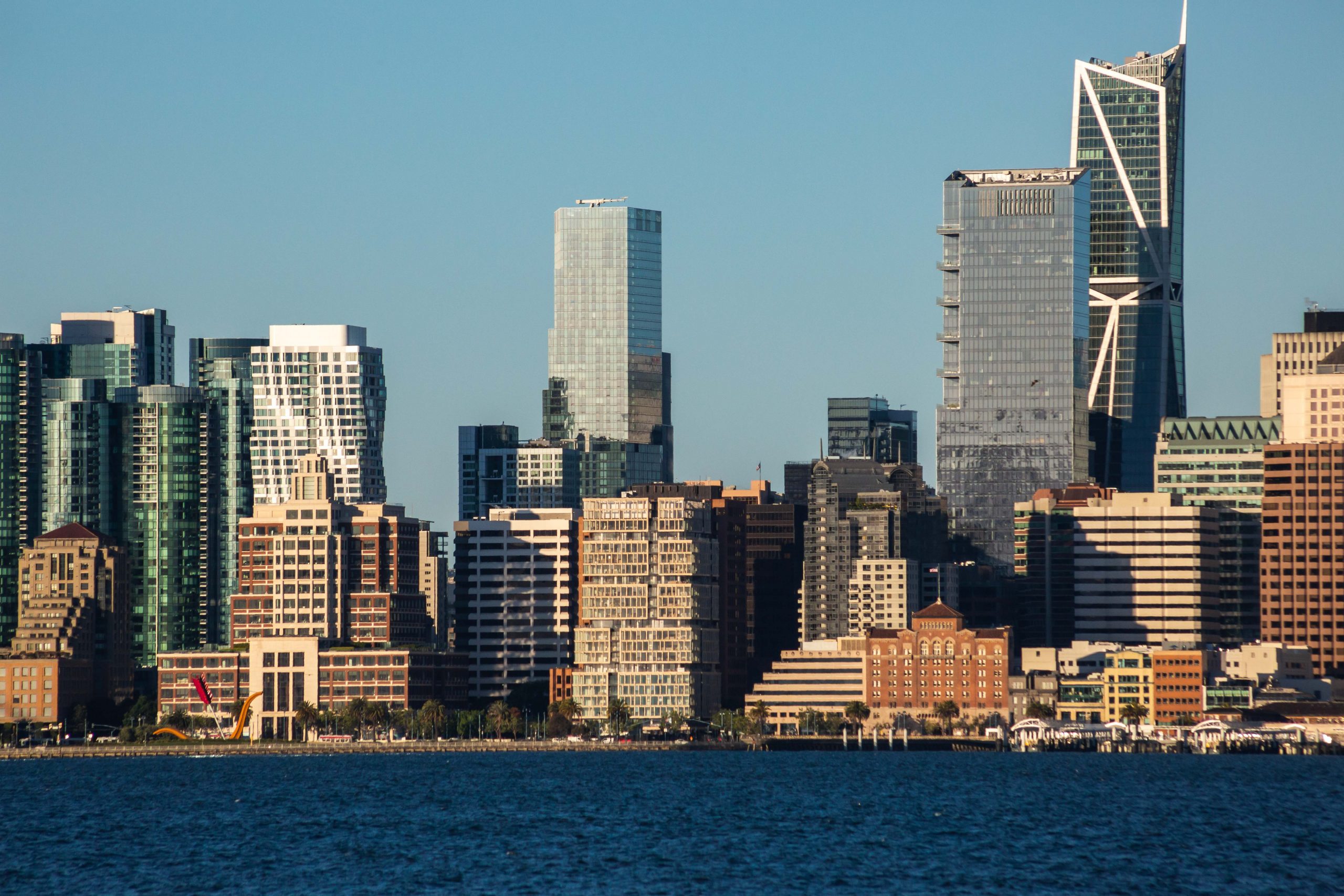 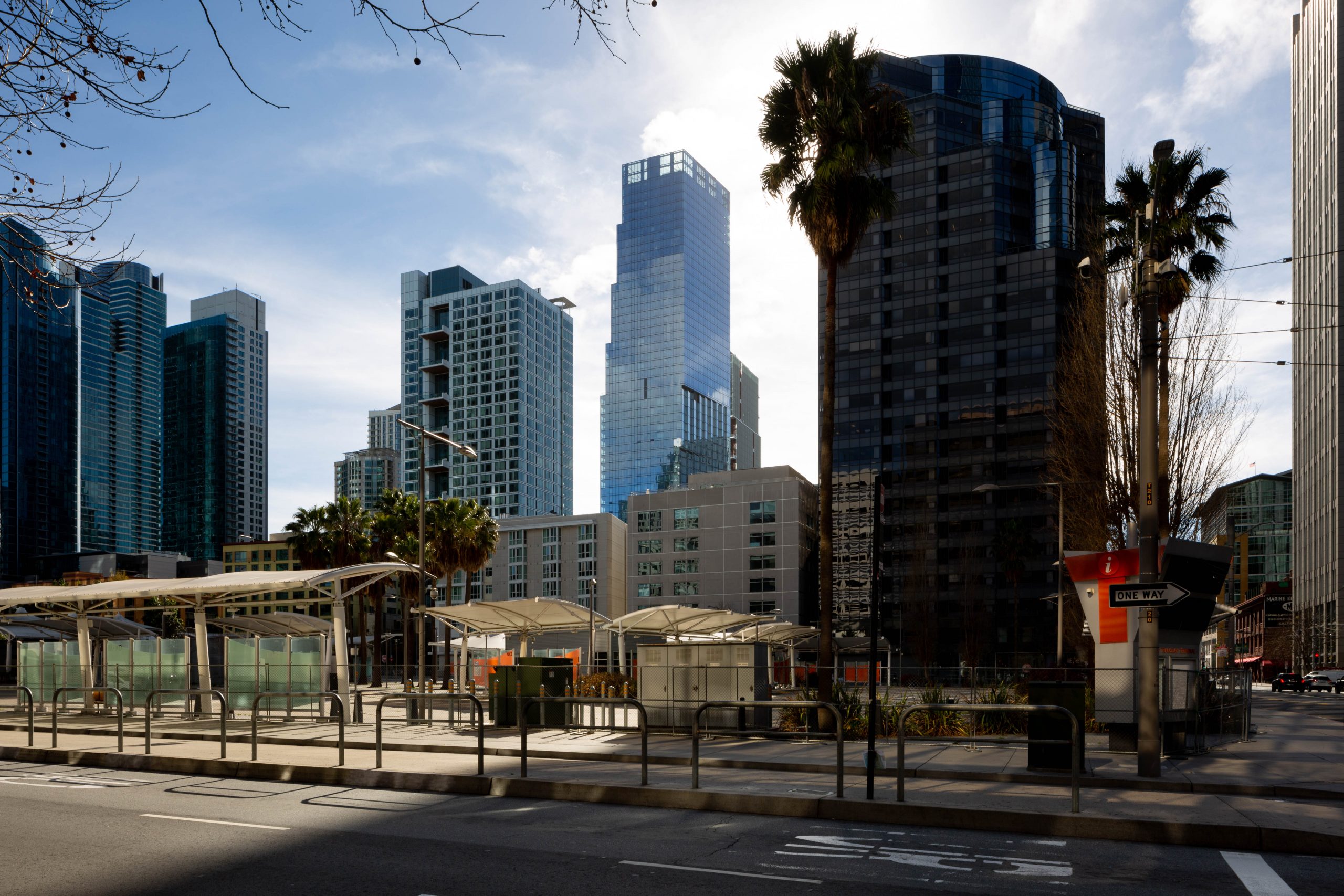 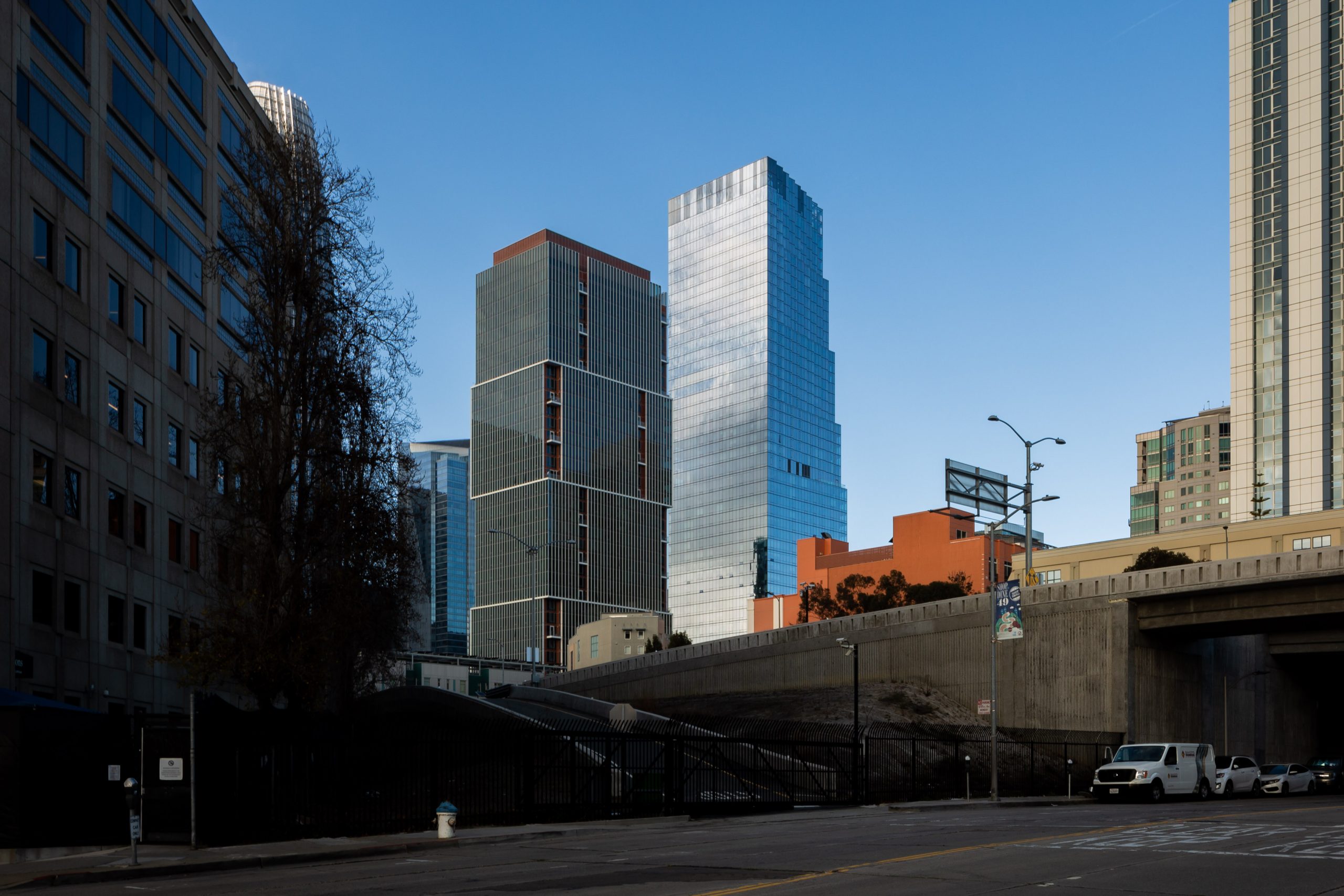 The Avery seen from Harrison and 2nd Street, with 500 Folsom Street in view, image by Andrew Campbell Nelson

Webcor Builders is responsible for the construction as the contractor. HKS is the architect of record, CMG and Cliff Lowe Associates were the landscape architects, and Clodagh Design was the interior designer. Jay Jeffers focused on the half-floor penthouse interiors. The building is LEED Gold Certified. 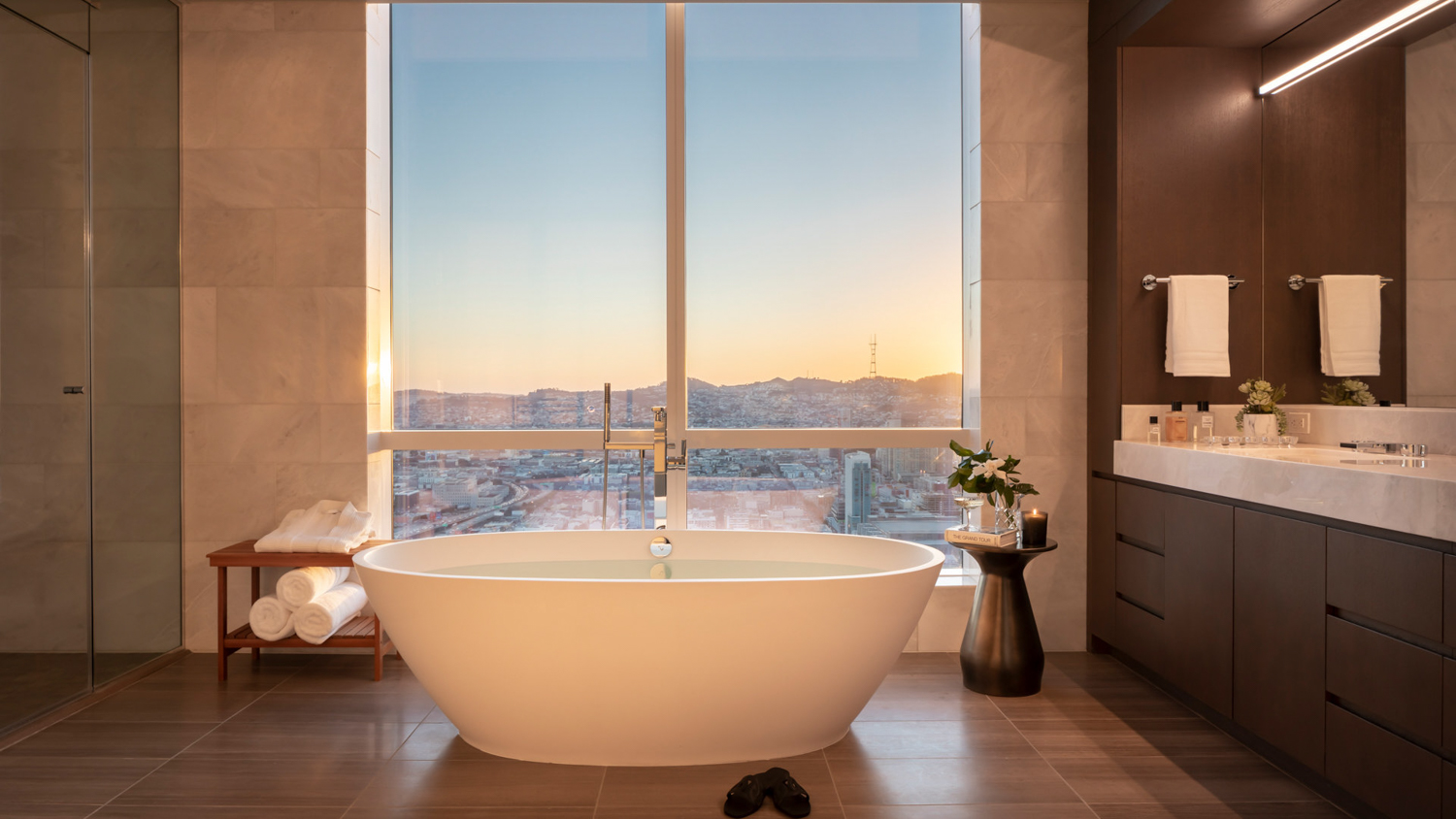 The building is located between Fremont to First Street and Folsom to Howard Street. Along with the MUNI bus lines running along Folsom Street outside the Avery, residents can find transit at the Transbay Transit Center just over a block away and BART ten minutes away along Market Street. 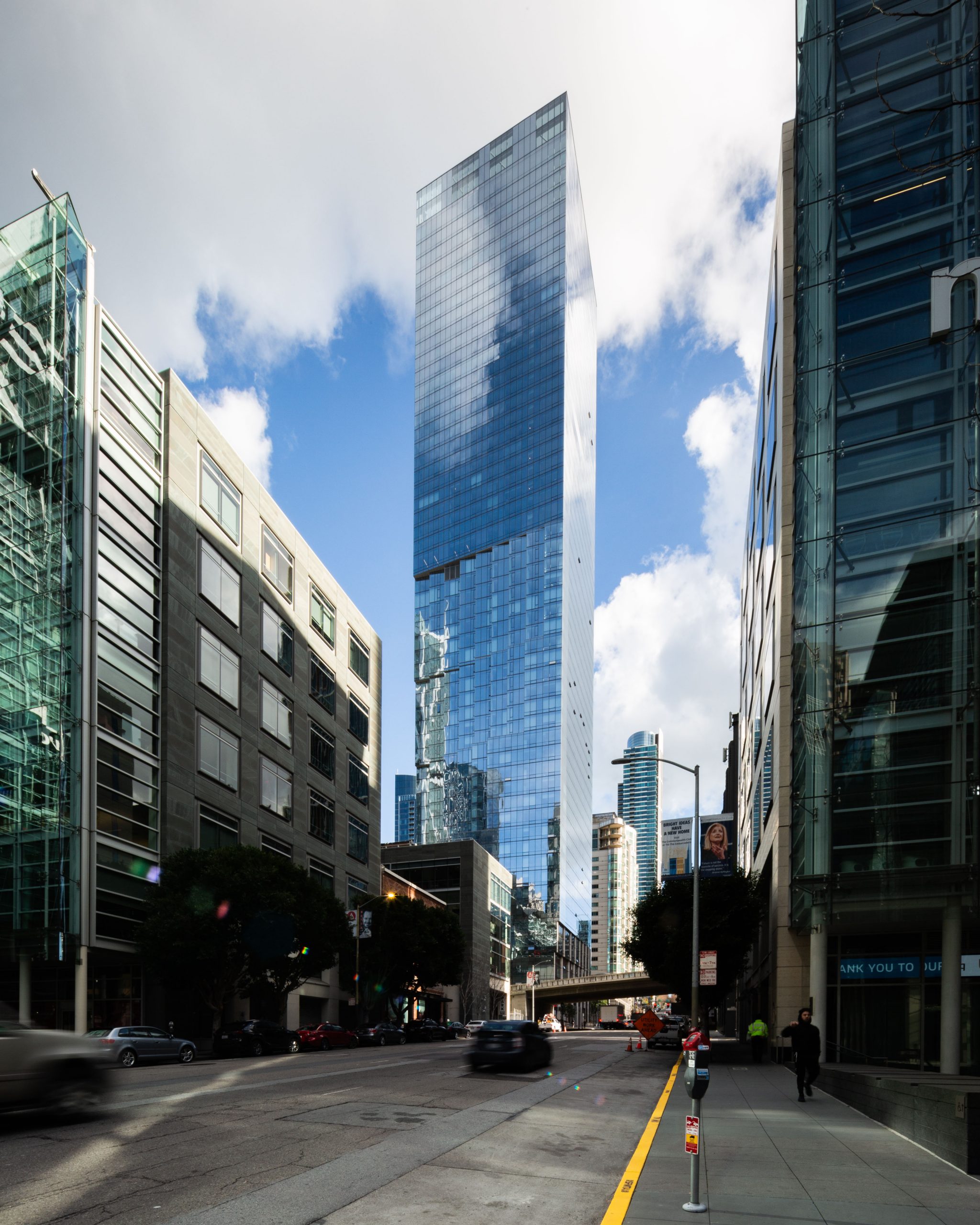 The Avery seen from Howard and 1st Street, image by Andrew Campbell Nelson

Related California was the project developer and remains the building manager. According to the building permits filed in 2015, construction was estimated to cost around $220 million, with later reporting in mid-2018 suggesting construction would cost over $303 million.