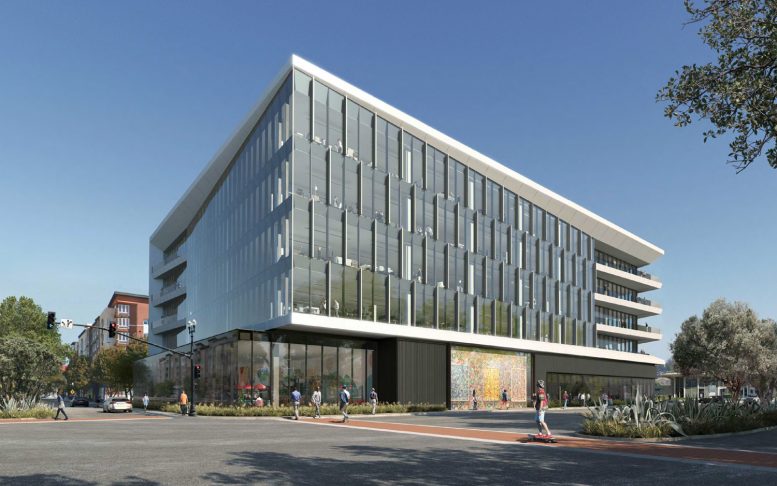 New high-resolution renderings have been revealed for the proposed six-story office building at 300 South Mathilda Avenue in Sunnyvale. The project is part of the city-altering CityLine Sunnyvale development that is bringing housing, offices, retail, and a new public park to Santa Clara County’s second most populous city. The project is being led by STC Venture LLC, a joint venture with Hunter Properties and Sares Regis Group. 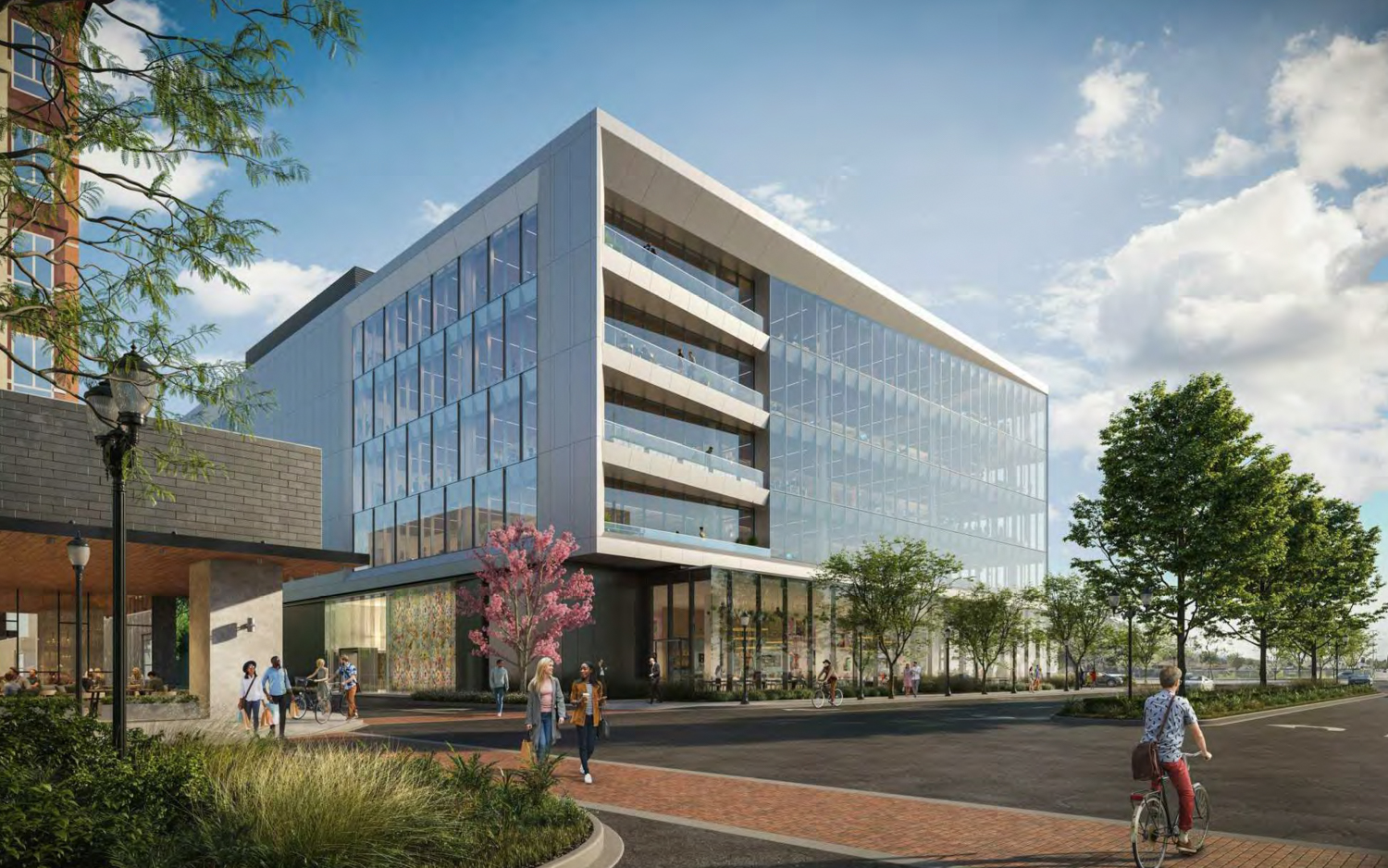 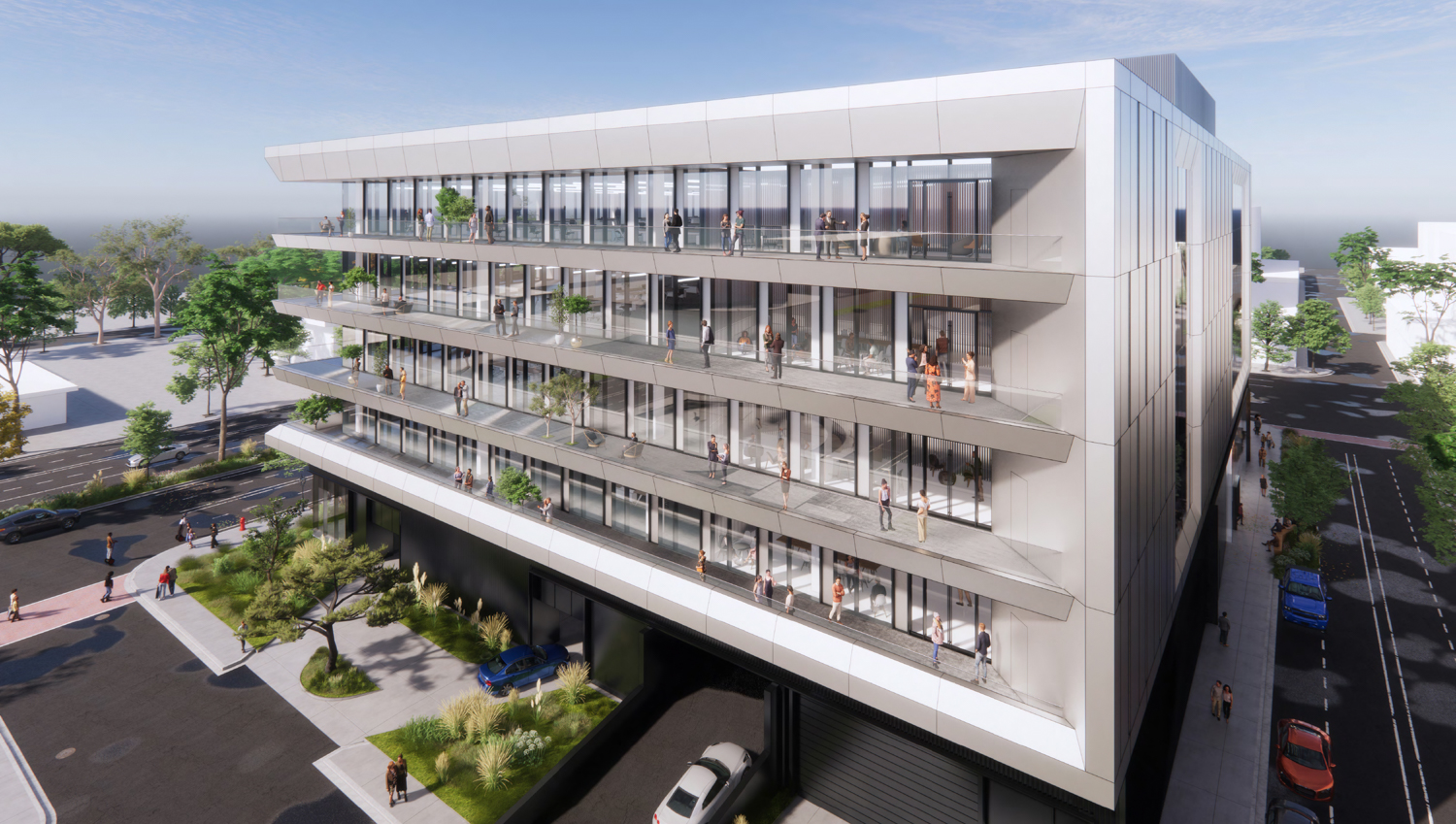 Aerial perspective of the balconies on Cityline Sunnyvale Building B at 300 South Mathilda Avenue, design by Gensler

Gensler is responsible for the design, a modernist design with an aesthetic variation. The curtain wall system will be given texture with vertical metal. The project will also include a wall of public art. Silver painted metal frames the curtainwall, tapering toward a focal point at the corner of South Mathilda and West McKinley. Meanwhile, the exterior on the corner of Mathilda and Booker Avenue comprises wrap-around decks with glass railing. 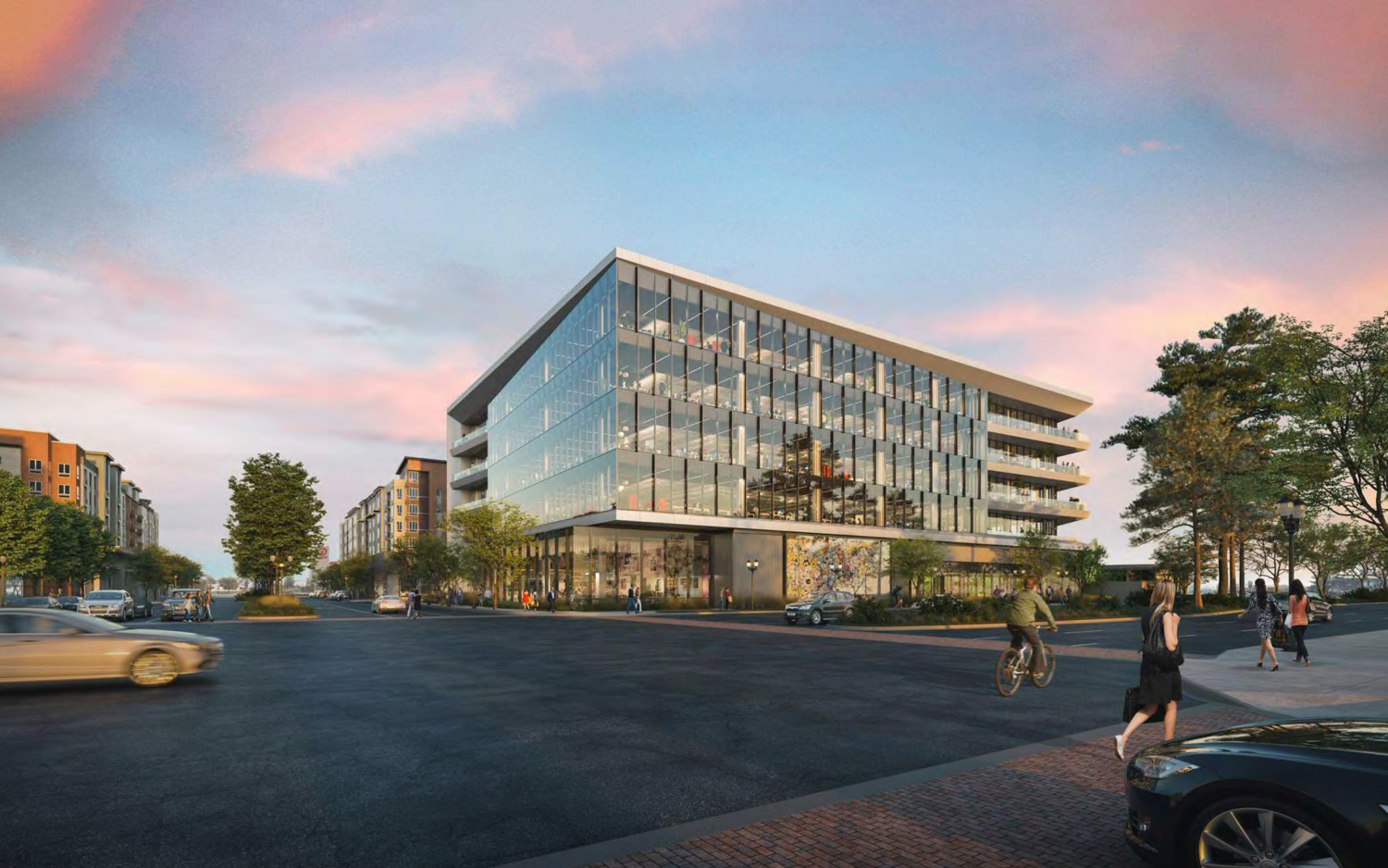 Civil engineering is by BKF Engineers, and landscape architecture is by The Guzzardo Partnership. 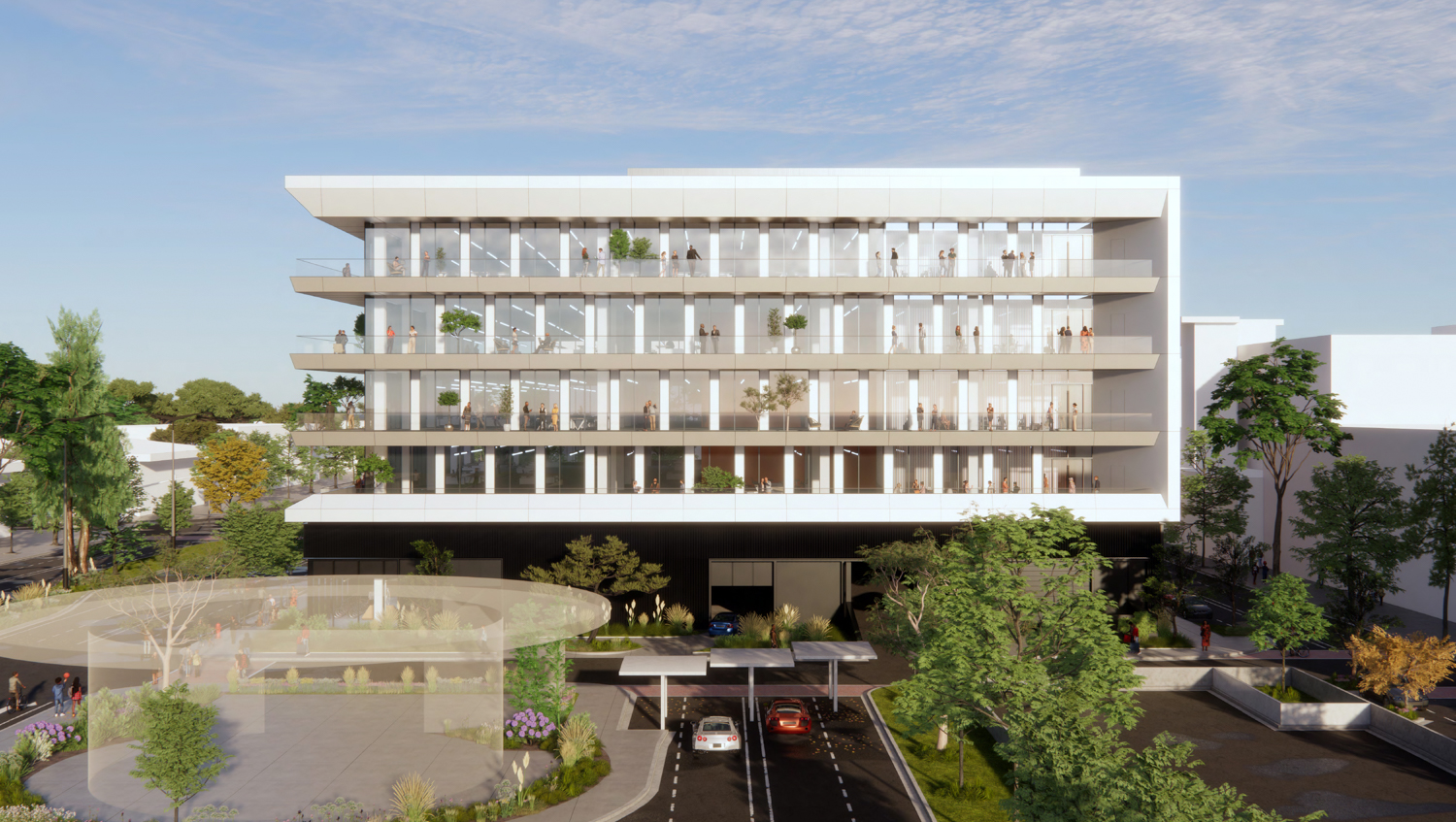 CityLine Sunnyvale is poised to reshape six blocks along Murphy and McKinley Avenue to finish at full build-out with 792 apartments, affordable housing, offices, 133,000 square feet of retail, and an acre of public open space. Of the 792 units, 88 will be priced as below-market housing. Construction has already been finished on The Flats, a 198-unit apartment building. CityLine will center around Redwood Park, a new public plaza built by STC Venture. 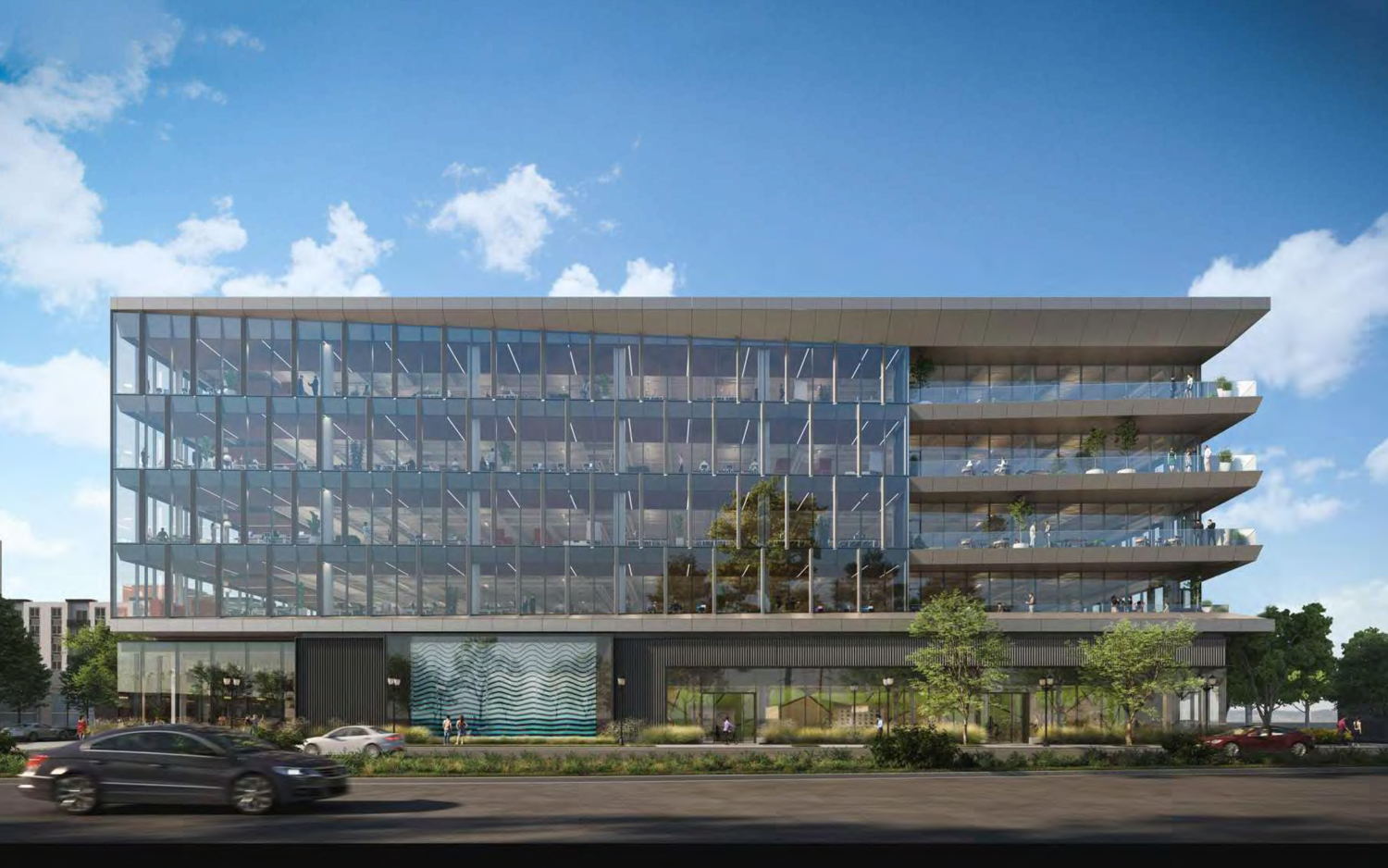 Vertical elevation with public art mural in view for Cityline Sunnyvale Building B at 300 South Mathilda Avenue, design by Gensler

Office employees will be on the south edge of the city center, nine minutes away from the Sunnyvale Caltrain station, passing VTA bus stations. CityLine is also a five-minute drive from the future Intuitive Offices complex designed by Foster + Partners, recently covered by SFYIMBY.

Be the first to comment on "Rendering Revealed for 300 South Mathilda Avenue, Office Component of CityLine Sunnyvale"