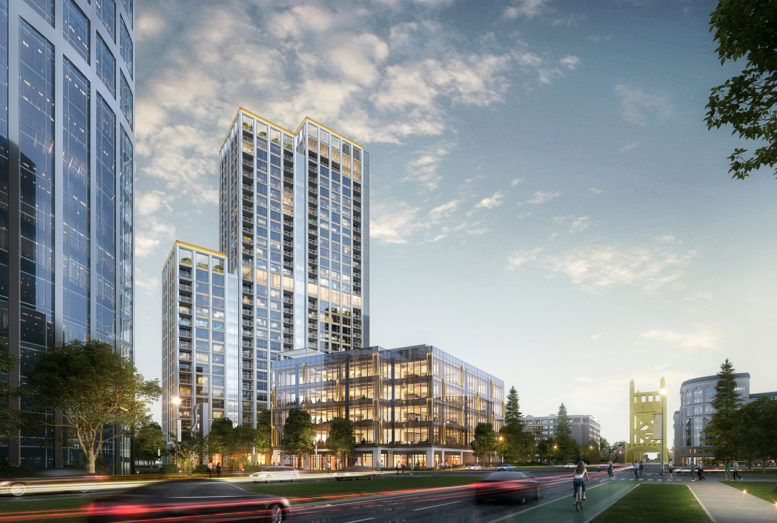 New renderings have been published for Lot X, a proposed mixed-use development with a residential skyscraper component at 201 N Street in downtown Sacramento. If built, the 32-story structure would be the tallest residential skyscraper in the State Capitol. Beyond housing, Lot X would create an open plaza overlooked by townhomes, a five-story office building, and a seven-story garage. Southern Land Company is responsible for the application. 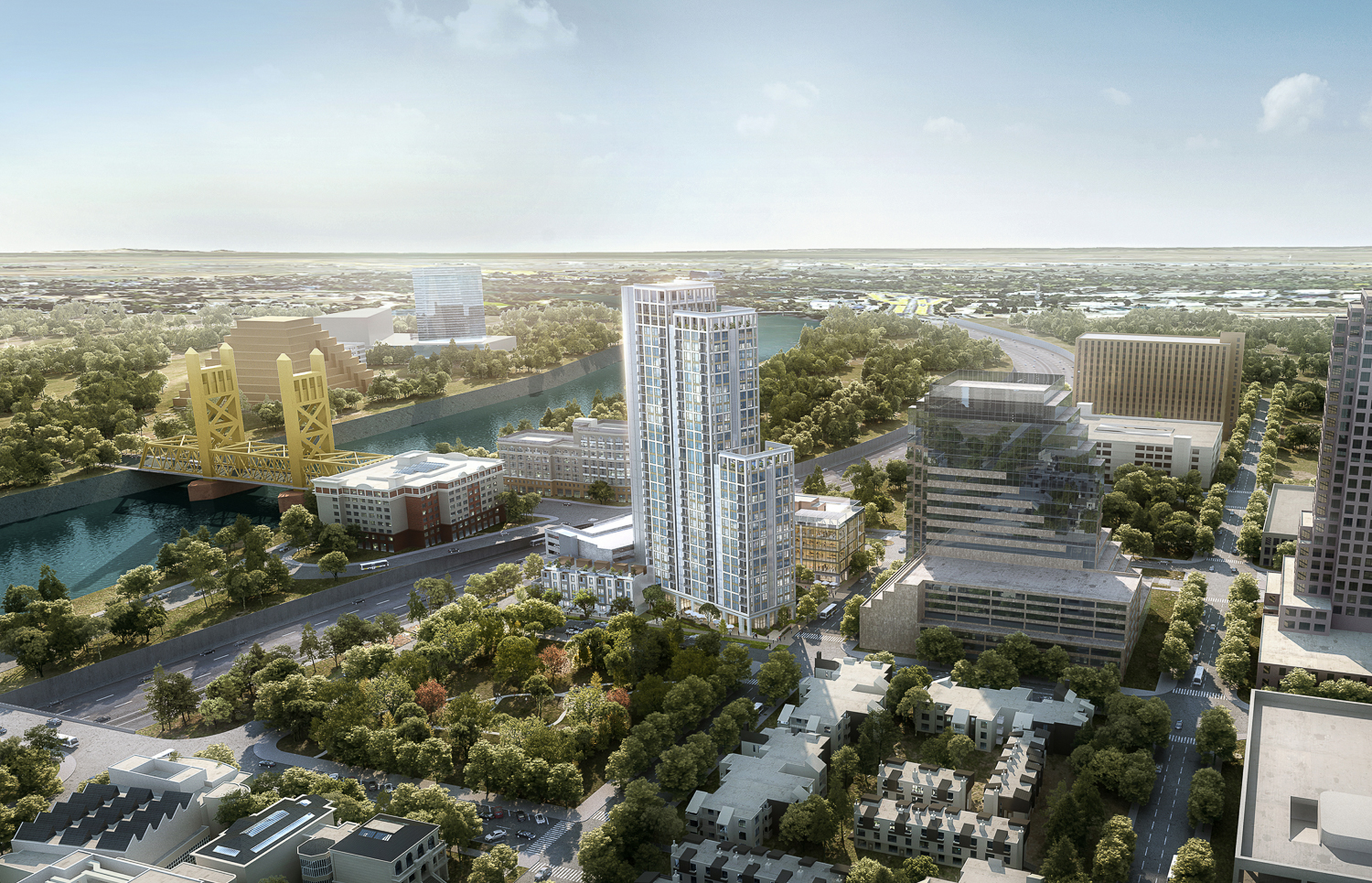 Of the 248 proposed units, there will be 46 studios, 130 one-bedrooms, 63 two-bedrooms, four three-bedrooms, and five five-story three-bedroom townhomes. The average unit will span 1,008 square feet. 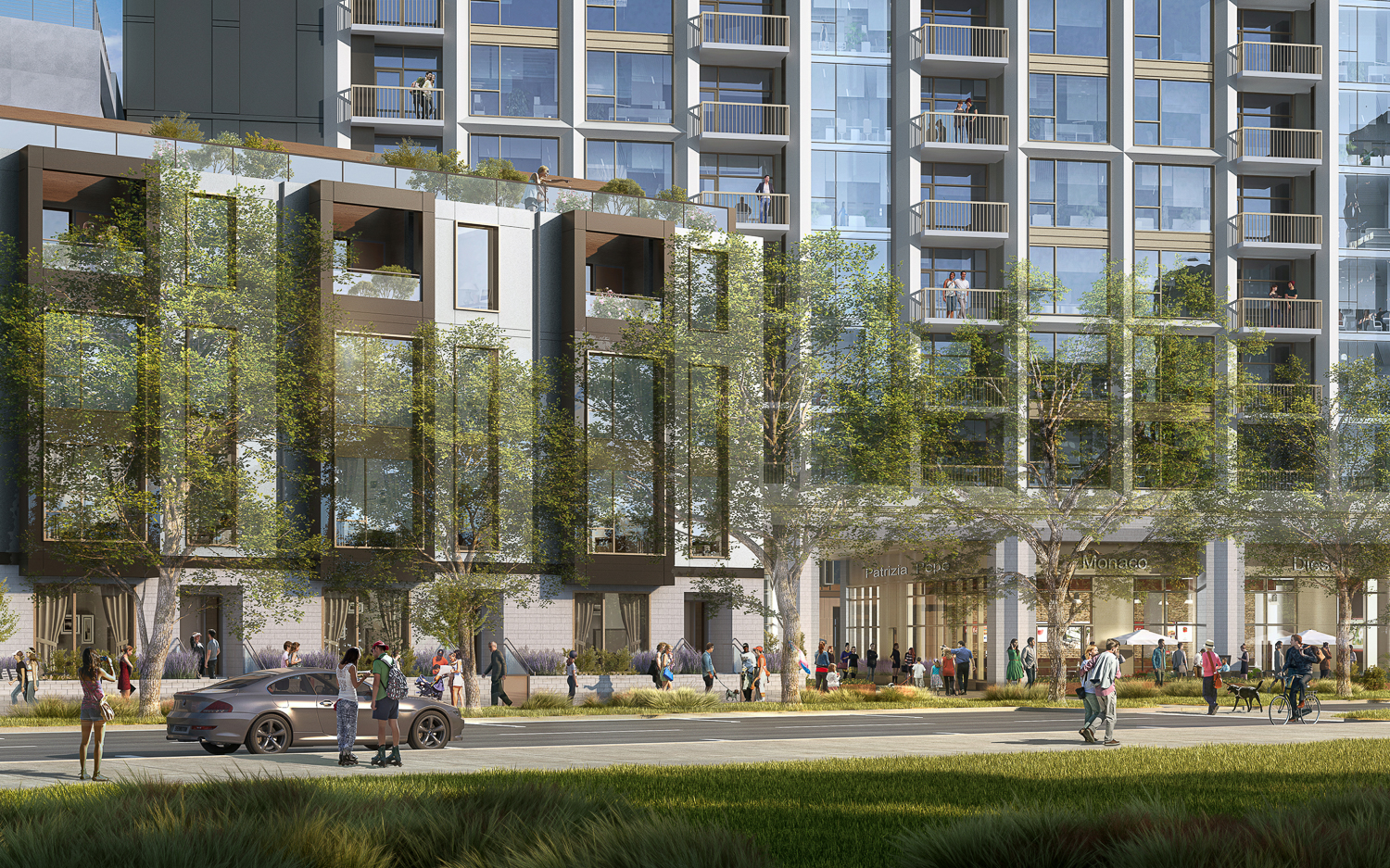 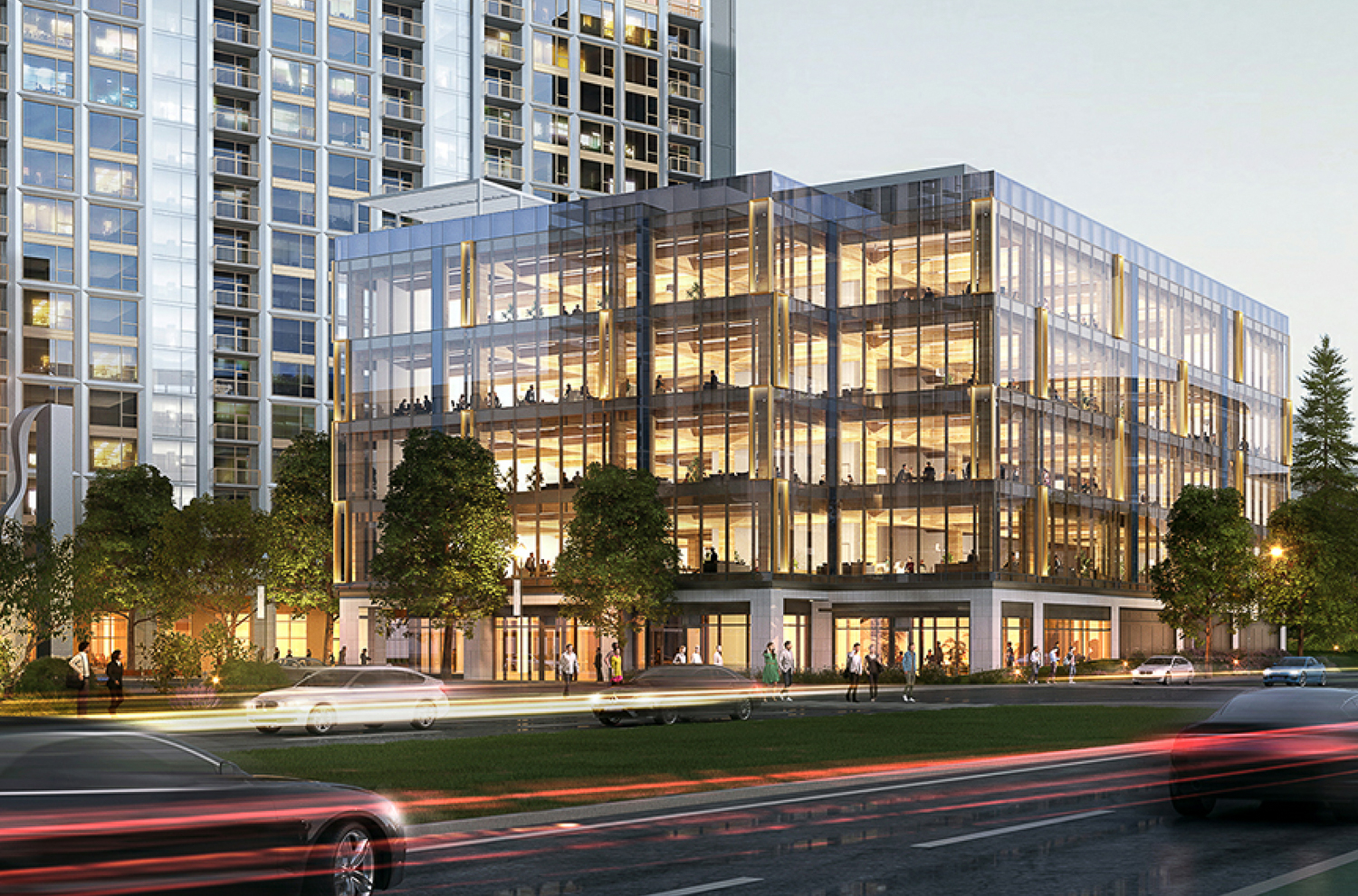 Solomon Cordwell Buenz is the project architect. The exterior is clad with floor-to-ceiling windows framed by thick white mullions. The matte linen white metal panels complement the base with thin-set stone and light champagne metal panels. The design itself is set back from N Street in three massings, giving drivers over the iconic yellow brick the most dramatic vertical view of the project height, while residents south of the building will see an articulated form deemphasizing its scale.

As the firm writes, the overall massing is “highlighted by a triptych composition that expresses three slender volumes stepping down eastword. Comprised of a palette of understated yet high quality materials, the tower details emphasize an aesthetic of elegance and timelessness.”

The following text is from the project narrative. It helps describe the project’s architectural intent and how it will connect with the neighborhood:

“The design breaks down the scale of the project by weaving the redesigned Crocker park into its own fabric with a series of landscaped outdoor spaces. A pedestrian paseo passes through the tower, physically and visually connecting the park to the site’s own central courtyard. Abundant outdoor seating and dining terraces will extend the limits of the park’s influence to create additional opportunities to enjoy the Sacramento weather… On N Street, a series of townhomes will create an intimiately scaled tree-lined streetfront promoting pedestrian interaction in a vibrant setting.” 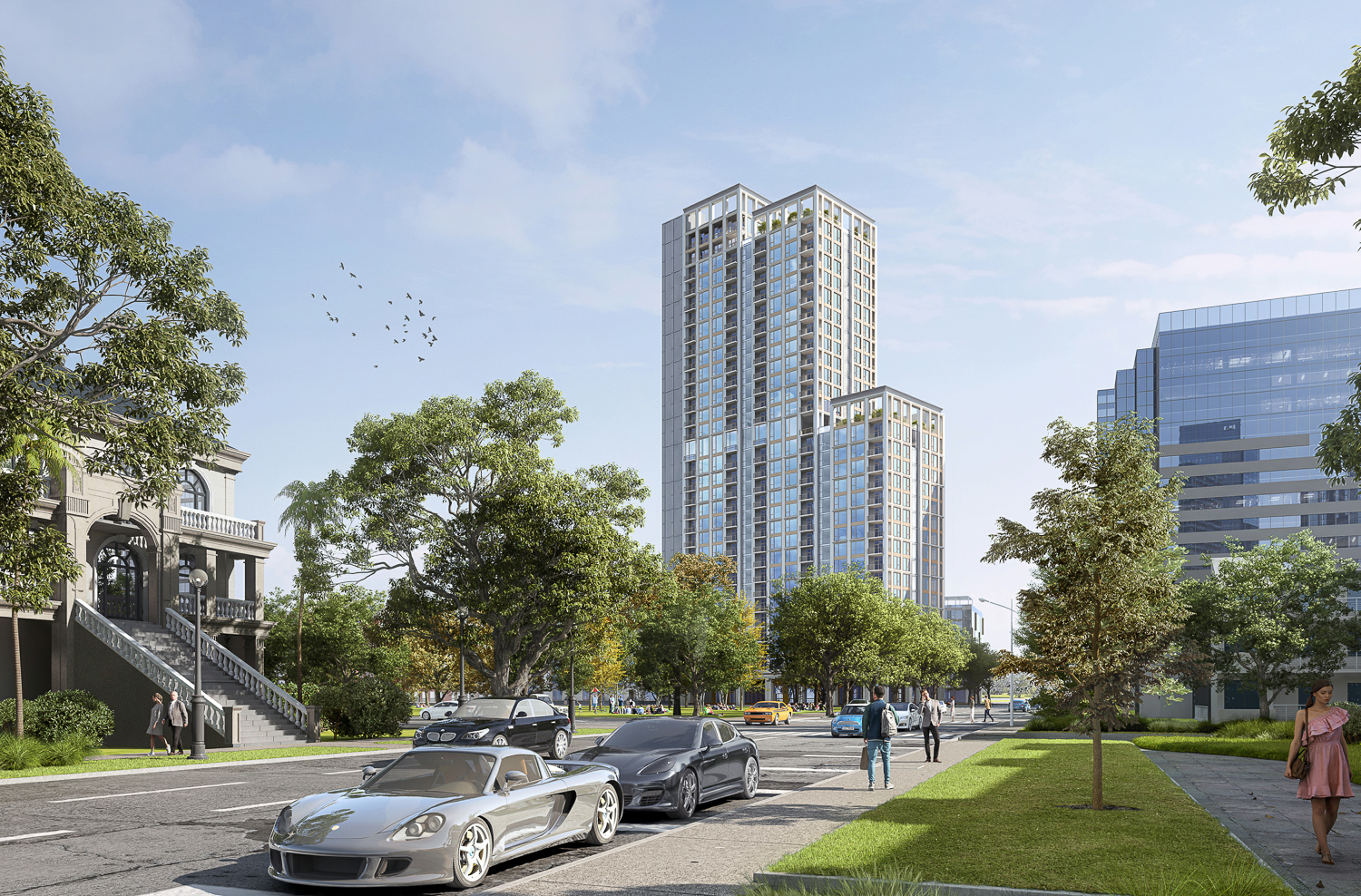 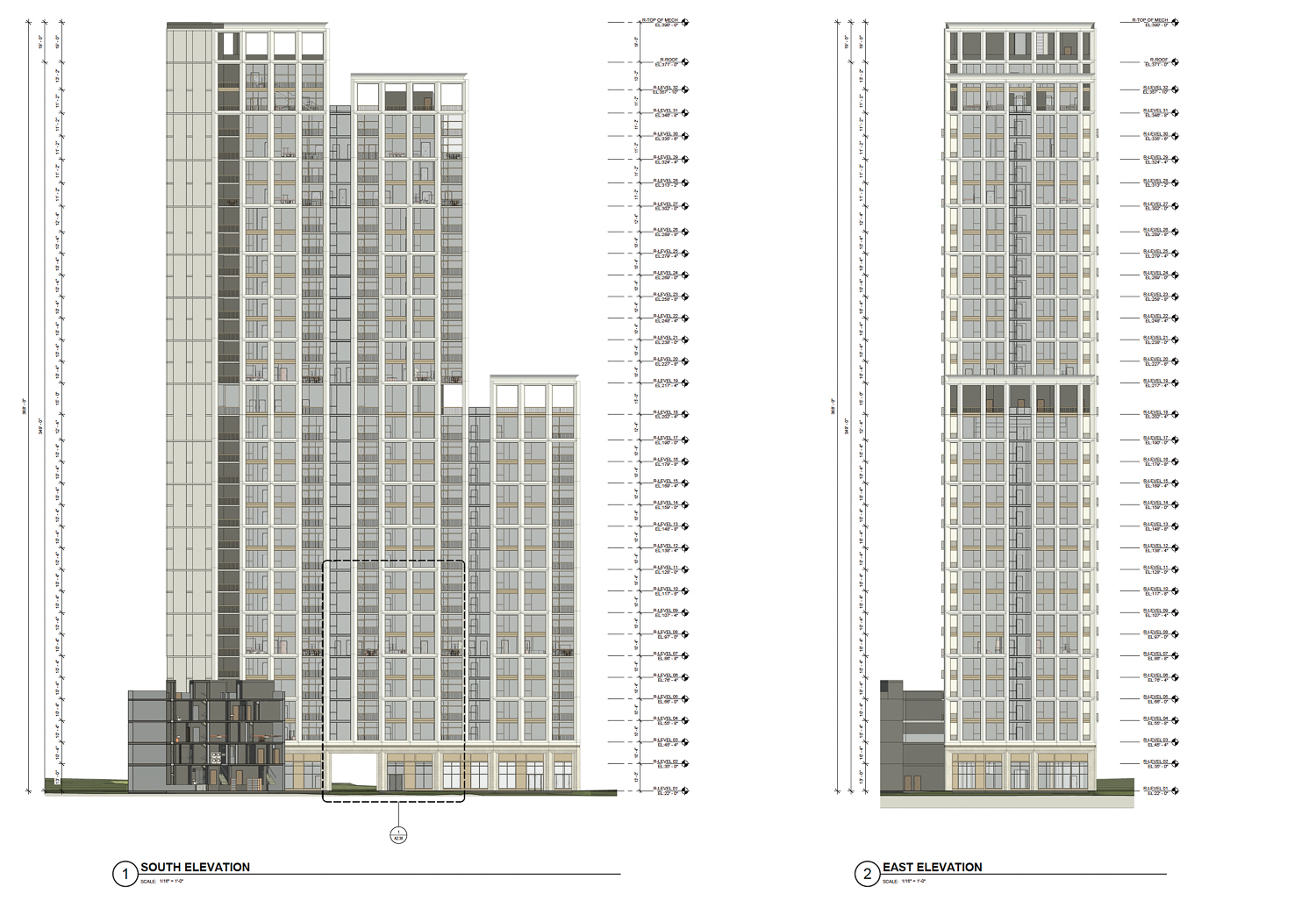 Though the development is poised to reshape a highly visible property in the city, it creates less than a quarter of the maximum allowed units that it is zoned for. Current zoning allows the property to build 1,071 units with 450 units per acre and a maximum building area of 1.55 million square feet. A height limit is not established.

BKF Engineers is responsible for civil engineering, while DeSimone Consulting and DCI Engineer are the project structural engineers. Atlas Lab Inc is the landscape architect, which will involve a significant amount of public open space and a paseo splitting the residential lobby from retail under the residential tower. 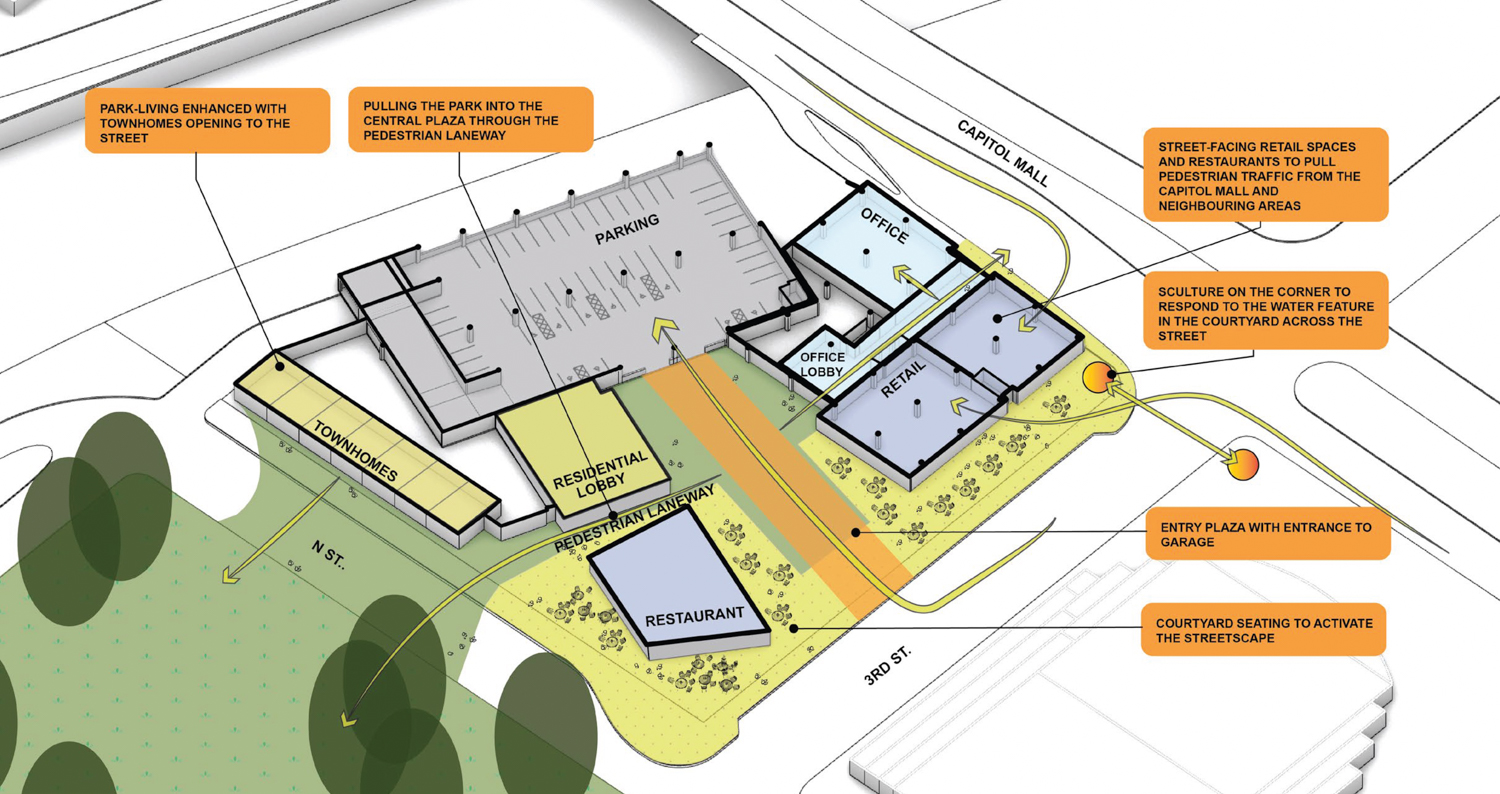 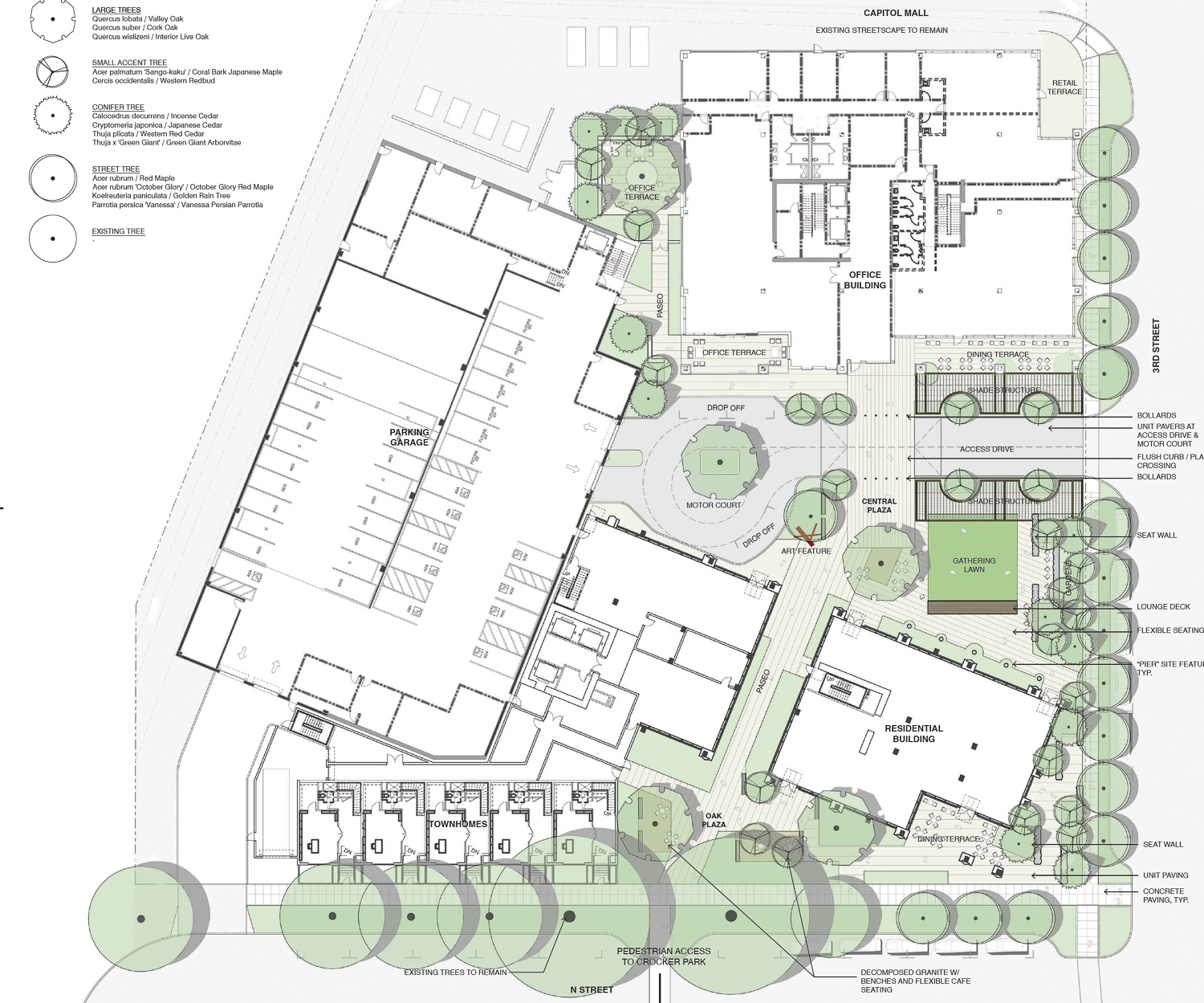 The 2.58-acre Lot X property is currently undeveloped. It is bound by N Street, 3rd Street, the Capital Mall Parkway, and I-5. The property had been addressed as 210 N Street in its initial application. It is now being addressed as 201 N Street. The construction job is estimated to cost $153 million, a figure not inclusive of the full development cost. 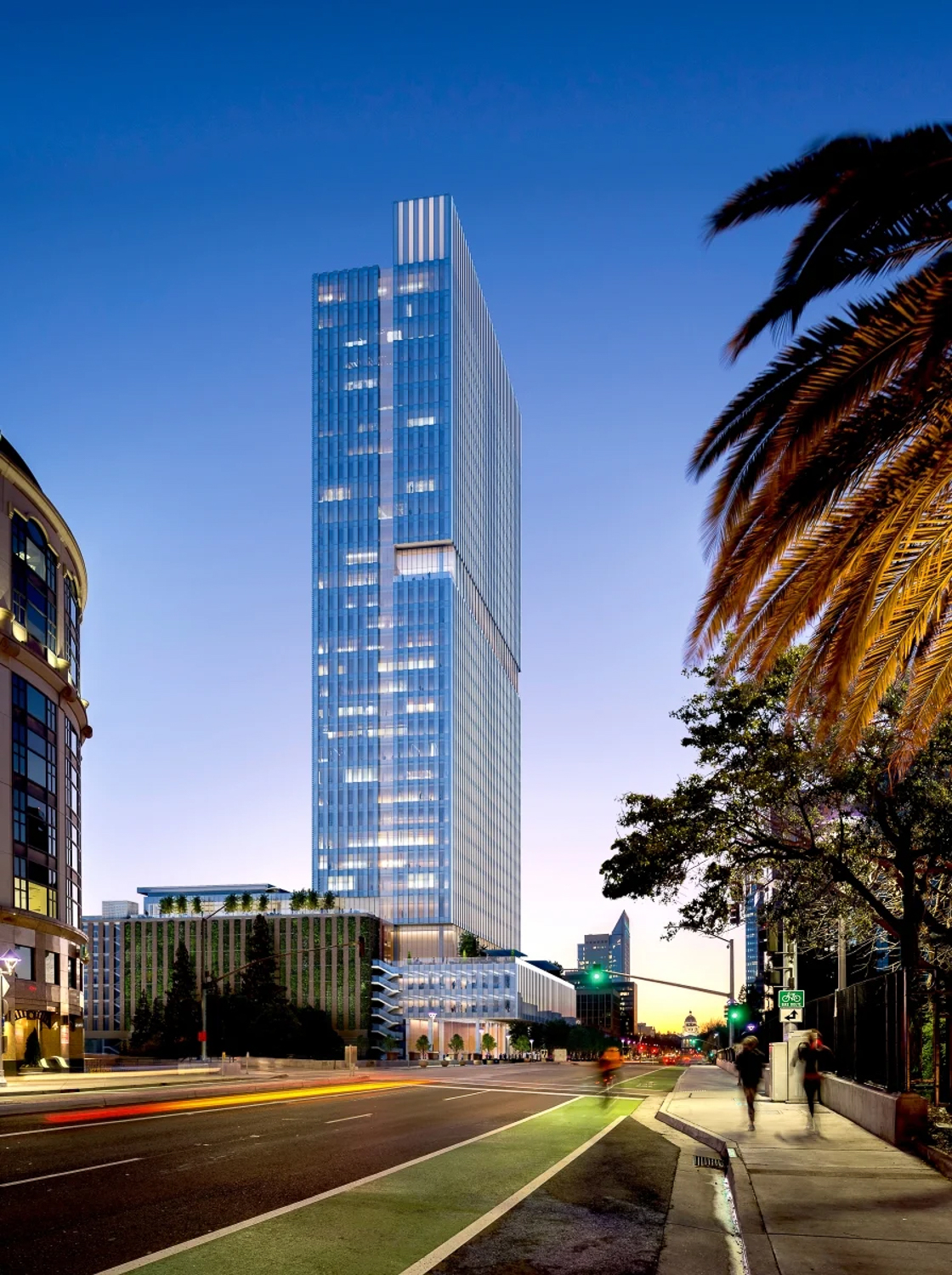 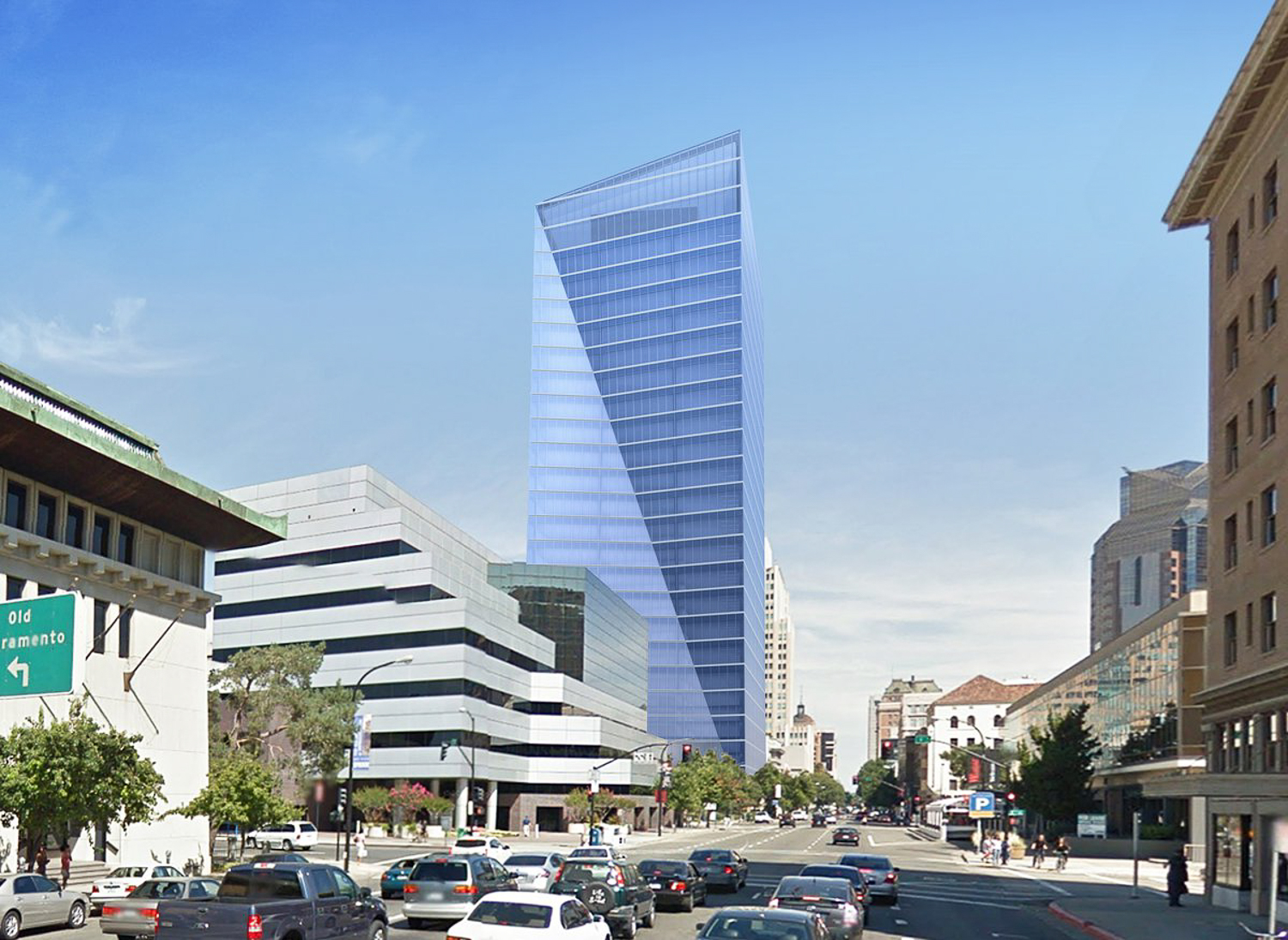 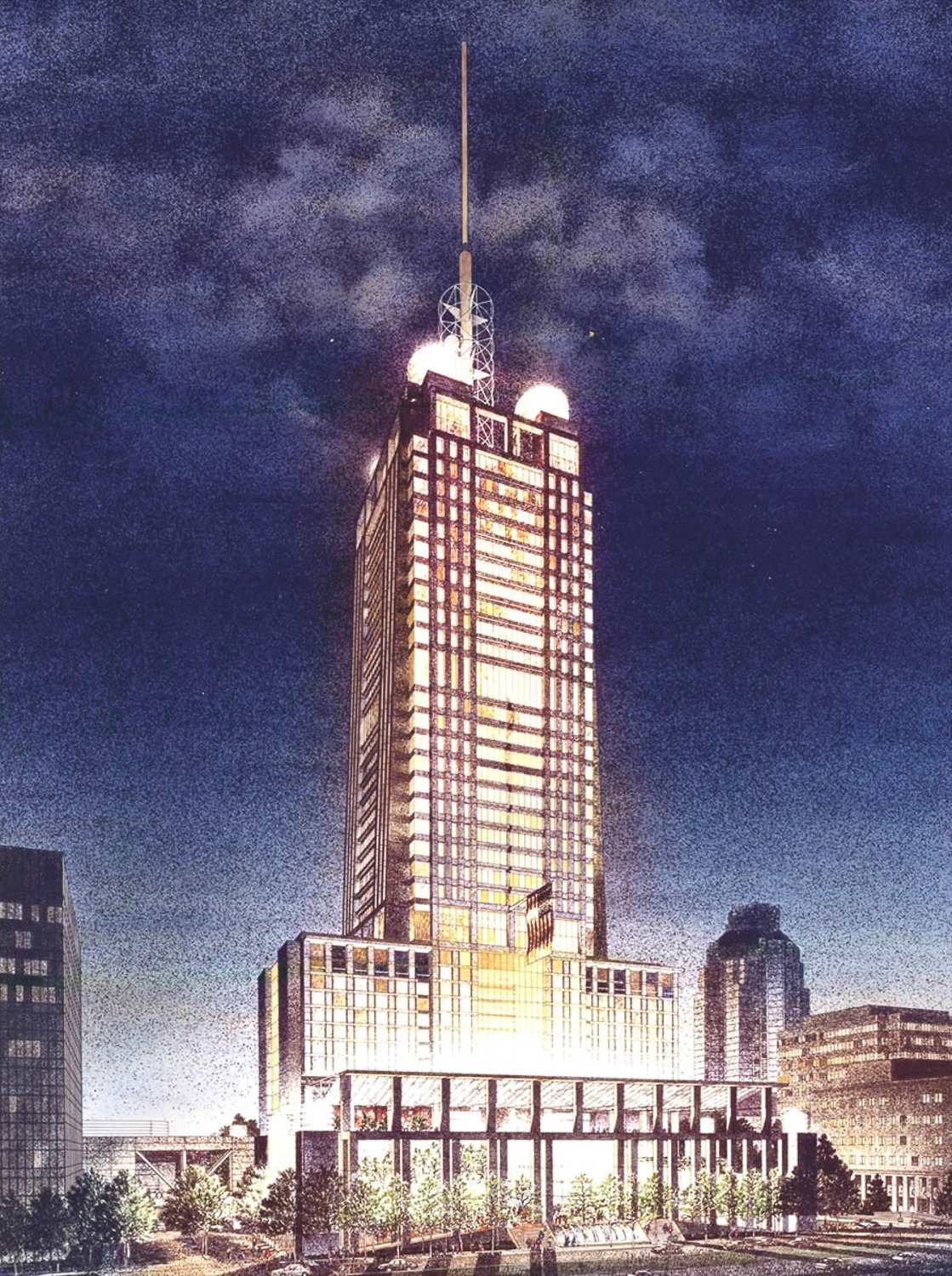 1989-era proposed for 6th and Capitol with offices and a 300-key hotel, design by Skidmore Owings & Merrill via Sactown Mag 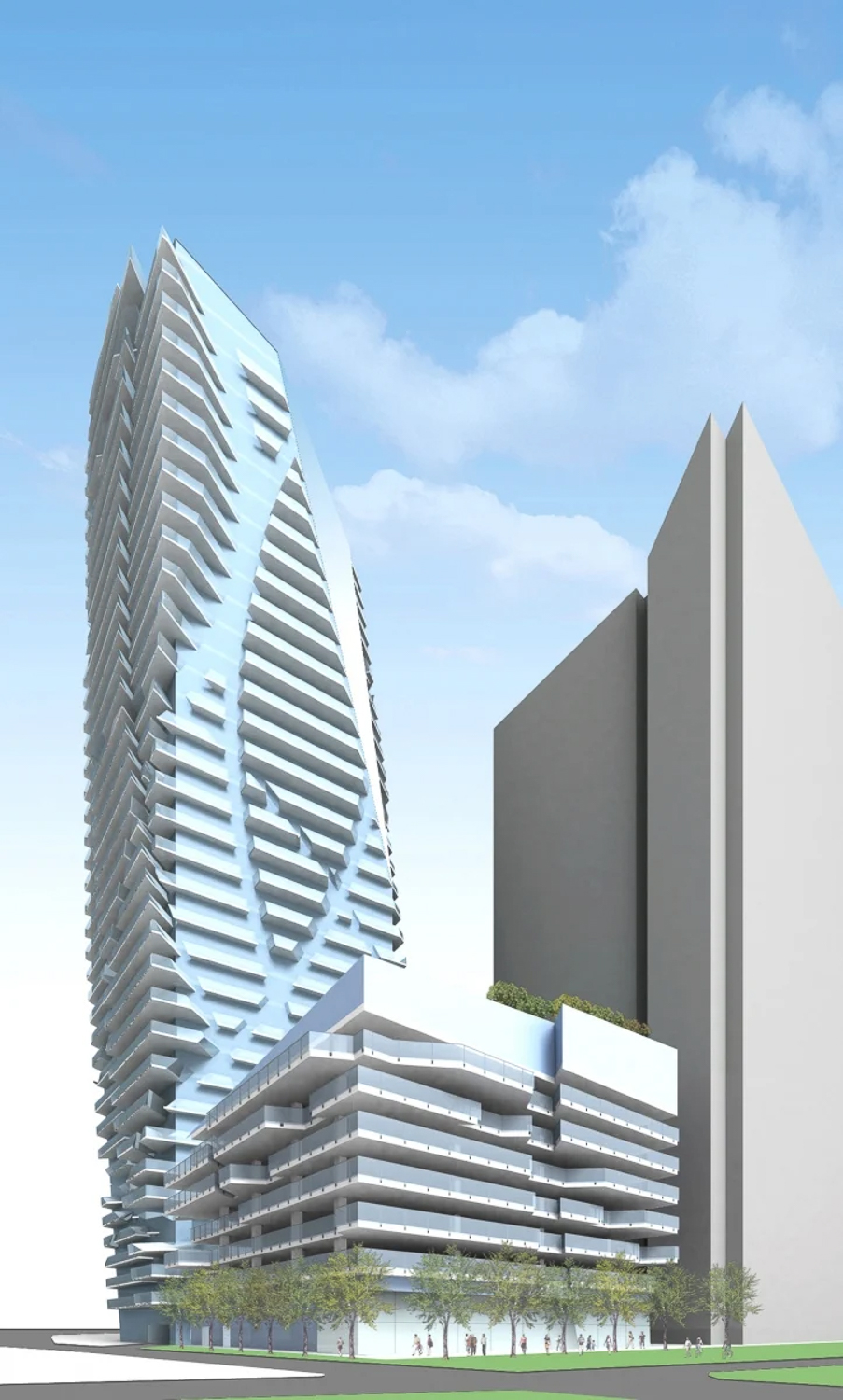 Lot X is not, however, the tallest proposal to come for the State capitol. The most recent tallest proposal was by CIM for Tower 301 in 2018. The 33-story glassy SOM-designed office building would have soared 128 feet above the current tallest building to a 557-foot pinnacle.

The tallest recent residential proposal in Sacramento was the 2007-era 450-foot Metropolitan Tower. Also, ahead of Lot X, construction may still start on 420-foot residential towers in future phases of Sacramento Commons. Construction is currently underway for the mid-rise component of the over one thousand-unit masterplan. Vanir Development Co proposed Vanir Tower to be a 400-foot mixed-use building with a 250-key hotel and 50 condominiums, designed by Pei Cobb Freed and Partners.

Looking further into the past, some notable unbuilt Sacramento plans include Aura, a 39-floor residential building for 601 Capital Mall designed by Daniel Libeskind in the early 2000s. In 1989, SOM proposed another office highrise, a 36-story project for the 6th and Capitol with 300 hotels, offices, and a rooftop observation deck.

The 423-foot tall Wells Fargo Center office building is currently the tallest in the city. The HOK-designed high rise is located just two blocks away from the proposed site of Lot X. 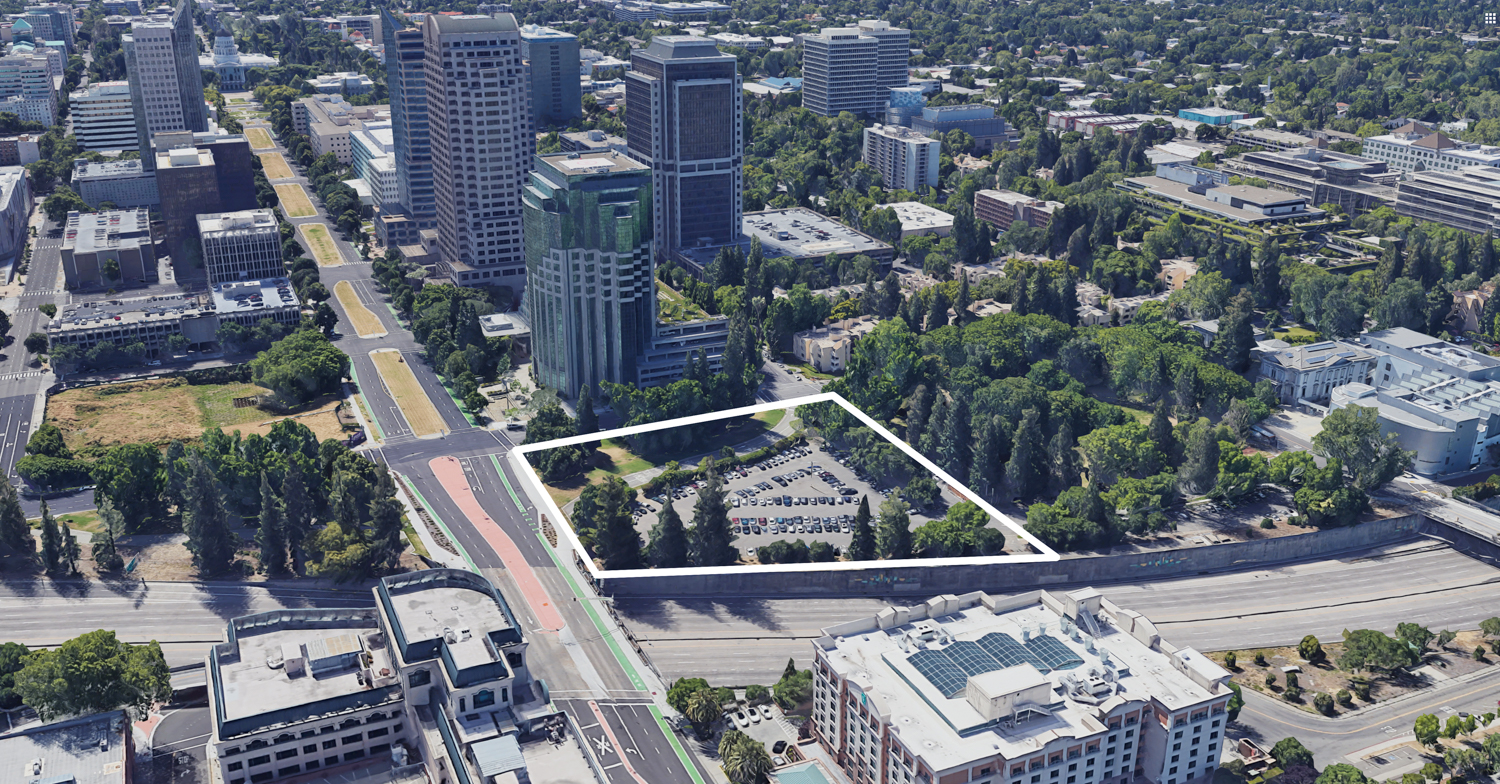 With so many unbuilt proposed for the Sacramento skyline, many are skeptical that the new proposal will join the city’s pack of 19 buildings over 200 feet high. Whether it is built will be a test of larger economic tides, as well as how effective new state laws are at streamlining the approval process for new construction.

Conversion of Victorian Office to Housing at 1022 G Street, Sacramento