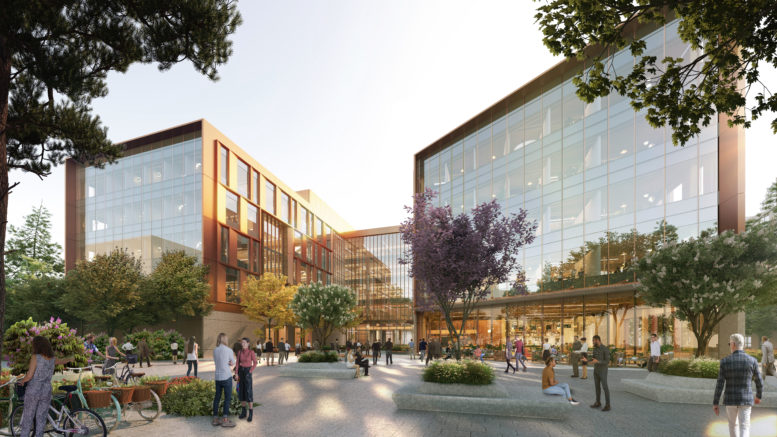 Construction has topped out for San Mateo County Office Building 3, the newest county government building in Redwood City. The project has been designed by Skidmore Owings & Merrill to be the nation’s first civic building made of mass timber and be net-zero energy. The building is expected to open next year.

The county leaders approached the headquarter as an important symbolic addition to the region’s built environment. It has been planned to engage with the public, provide efficient and transparent governance, and be uniquely sustainable and energy-efficient. By using cross-laminated mass timber, COB3 will achieve an 85 percent reduction in structural embodied carbon. Compared to a conventional building of its size, COB3 will save around 610 Megawatts and over half a million gallons of water. 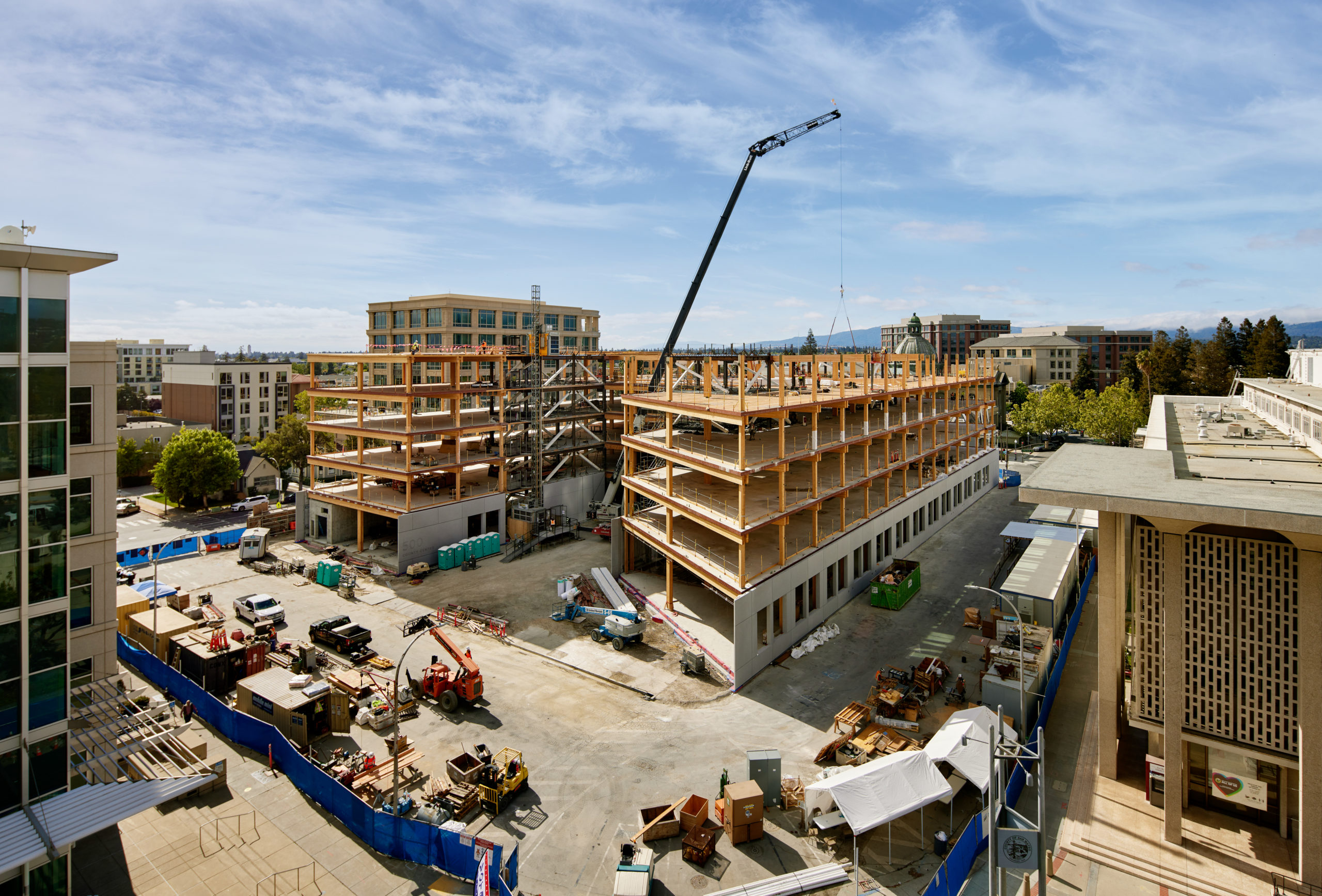 What informed the project’s exterior design of large windows and metal on top of a stone base? What are the façade materials and primary decorative elements going to be?

The building façade was first and foremost designed to be high-performing, balancing solar heat gain with access to views and natural illumination. This was critical to allow the building to meet its net-zero energy goals. The east and west façades, which are more exposed to solar heat gain during the morning and afternoon, are therefore treated with vertical openings accompanied by vertical sunshades. The north and south façades are shaded with horizontal projections on the south, and are both more transparent, featuring larger planes of glass that open front towards the north and south entries and public plazas. 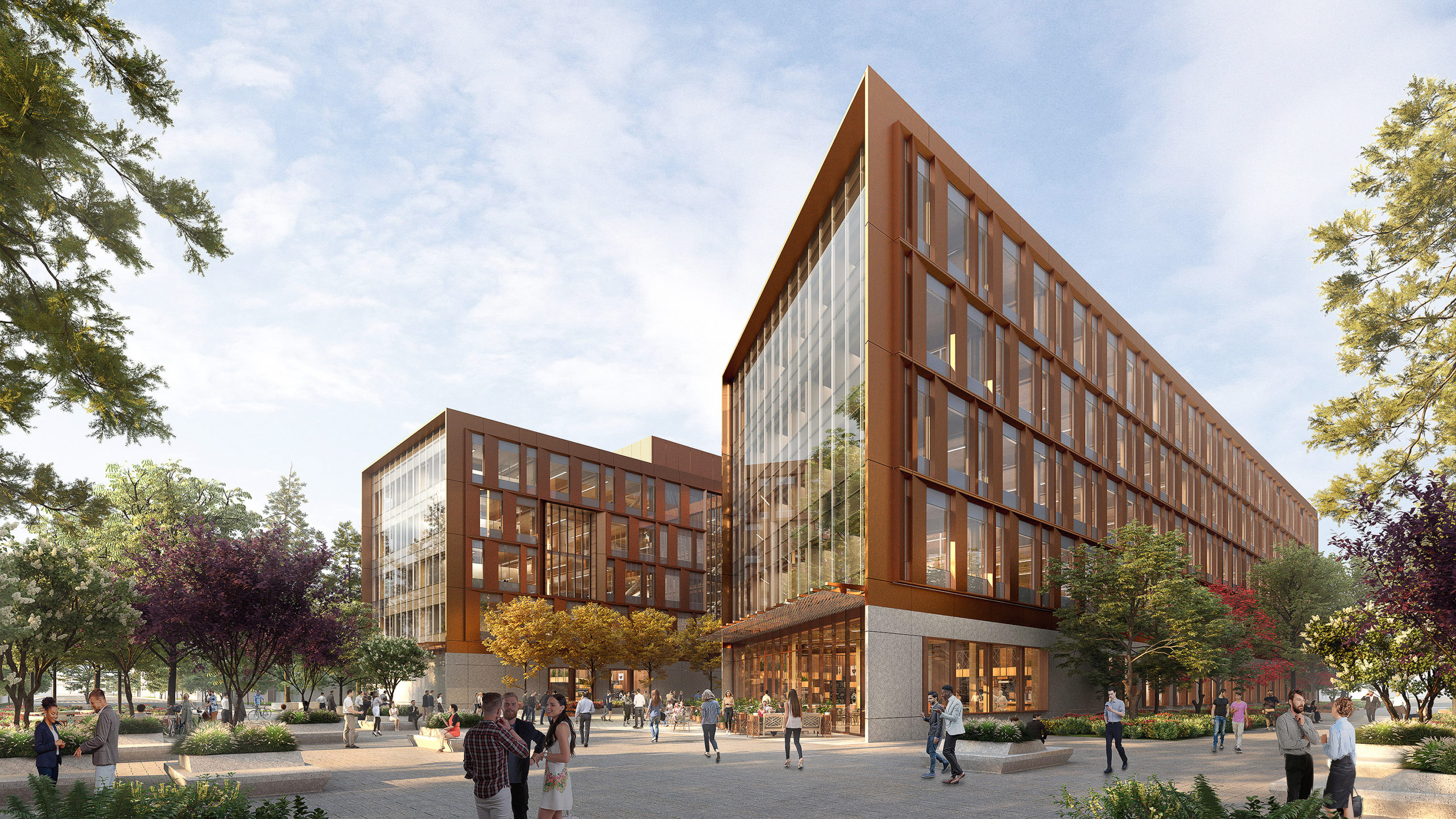 The ground level, housing the public and civic functions of the building, is articulated with precast concrete panels, evocative of the Sierra White granite which is often used for civic buildings in the area. This gives the building the proper gravitas and solidity at this civic-public level. The upper levels are a unitized curtain wall system clad in a copper-colored anodized aluminum, which is a beautiful warm-toned material, endowed with natural tone variation that compliments the natural wood finish of the inside. The color recalls some of the older brick buildings in Redwood City and provides a contrast with its immediate neighbors, which generally feature a light stucco exterior.

Can you describe the project’s programming?

The building configuration features a north and south public plaza linked by a welcoming and transparent building lobby. This design creates a connection between the downtown Redwood City Theater District towards the south and the San Mateo County buildings towards the north. At the ground level, the building houses the main public functions, including the Board of Supervisors Chamber and a generous public lobby, which will serve as a pre-function space for the Chamber, as well as a gallery space and event space. The ground level also features a multi-purpose room, training facilities, café and staff gym. The upper levels house office space for several county departments. The central area at each floor is configured with shared break areas, conference rooms, and informal working areas contributing to the quality and diversity of the workspace. 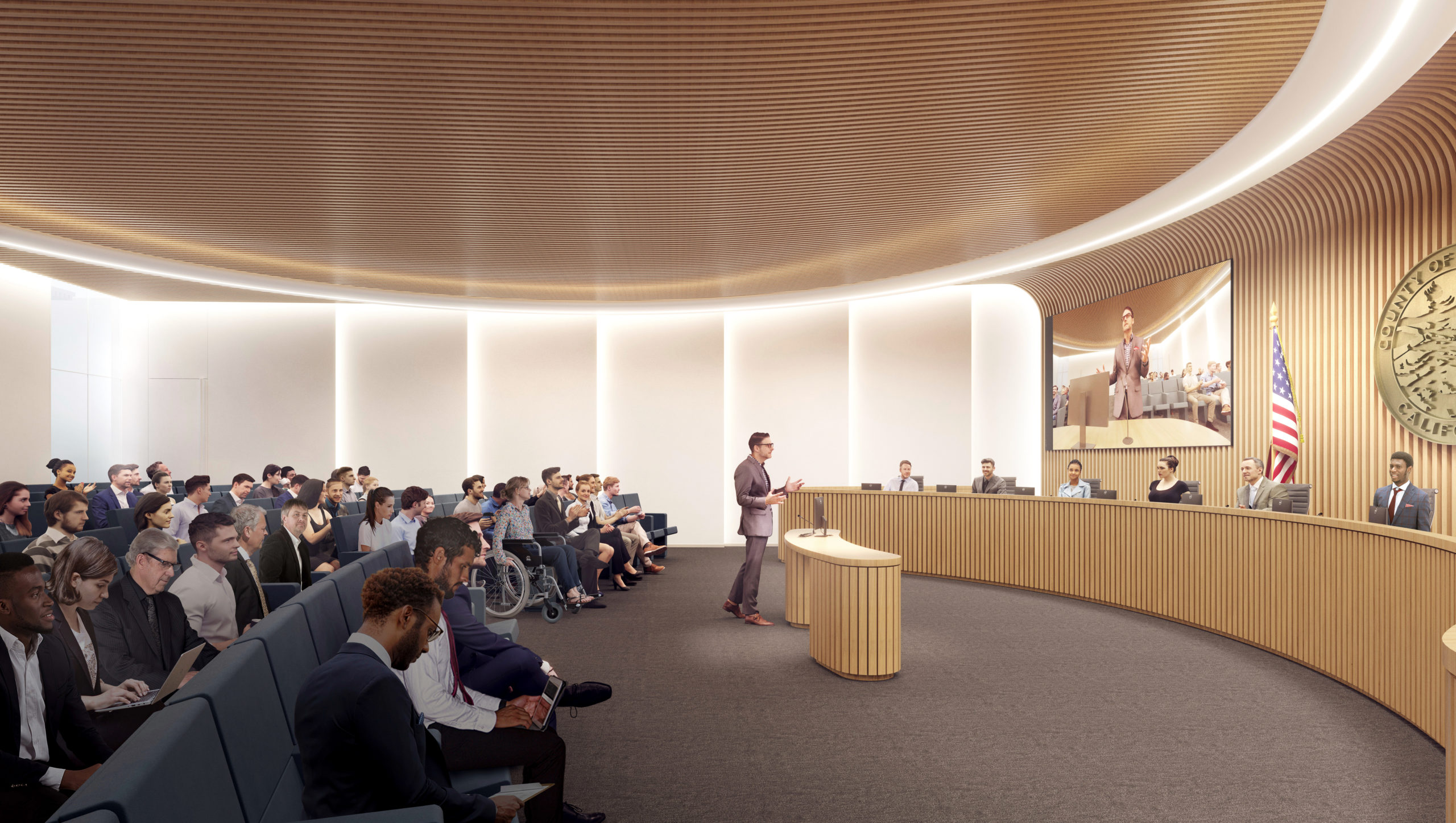 For the public, what will this building offer? How will they be able to engage with COB3, the two courtyards, and the interiors?

The design of COB3 creates a natural public link between the northside campus and the downtown Theater District. The north side café provides a public destination within the heart of campus. The two public plazas will provide gathering space during events in the Board of Supervisors Chamber, and other activities, including receptions and public events. The outdoor public spaces are linked and complement the public lobby – also designed for indoor gatherings, events, and exhibitions. This large ‘multipurpose space’ to the south is intended to encourage regular public programming. 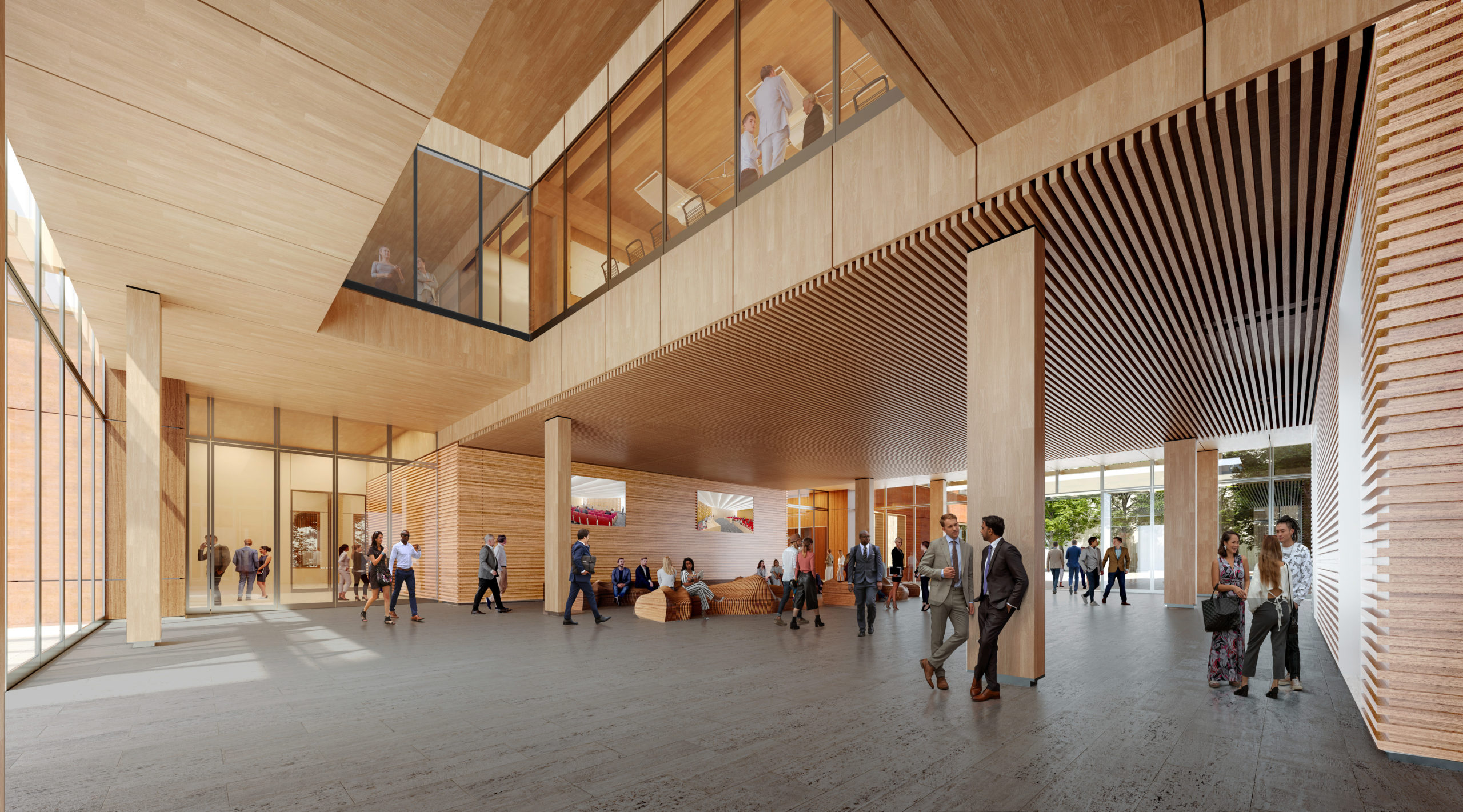 Is there any element of this project in particular that you look forward to seeing when it’s finished?

It will be wonderful to see the building and surrounding areas come to life and be used by the community. It’s been really exciting to be a part of such an ambitious project led by a local government who is taking firm steps to address the challenges of climate change through smart design. 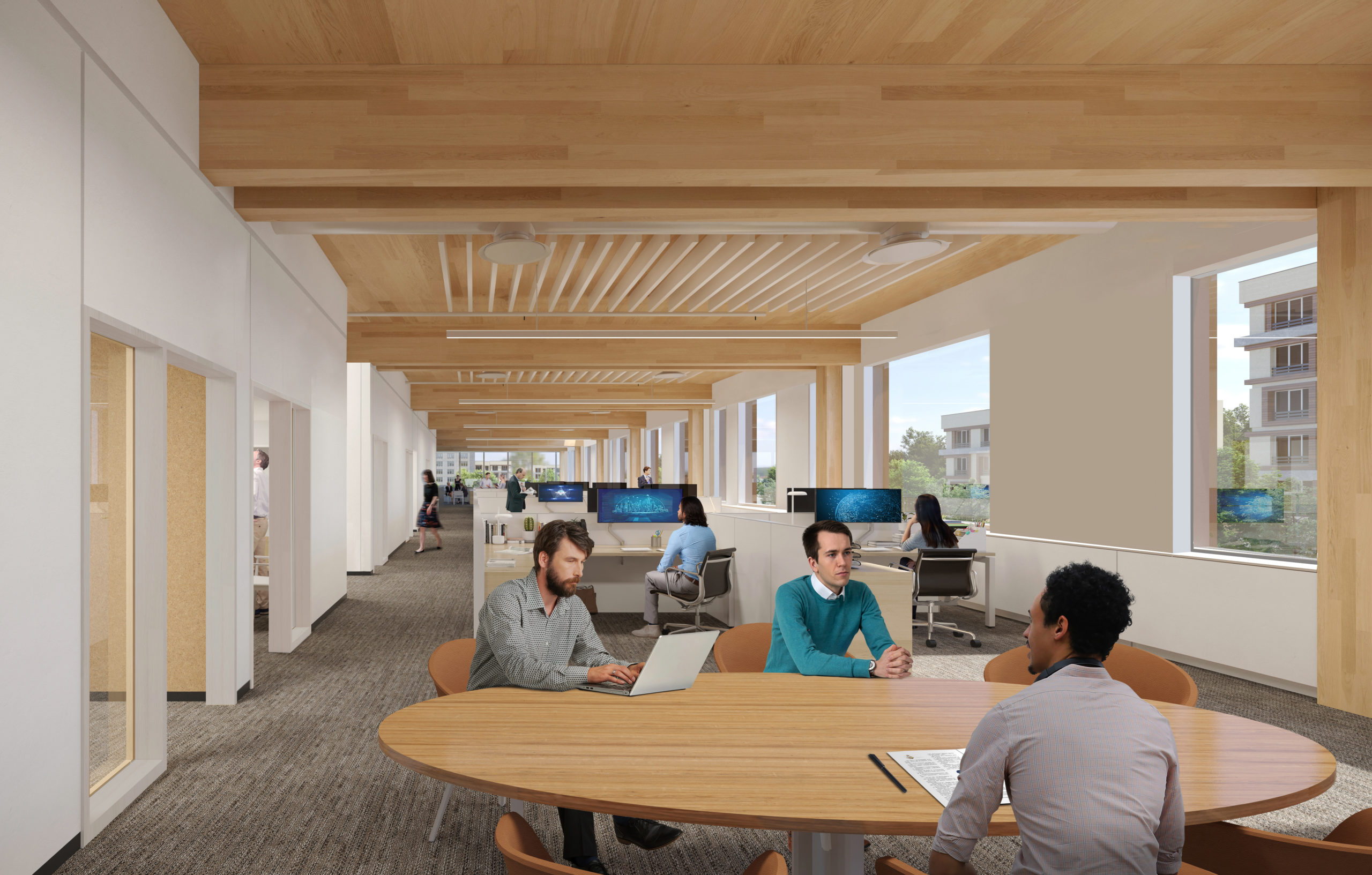 How will COB3 achieve a net-zero energy footprint?

At its inception, the design team focused on passive design strategies to reduce the operational energy usage in the building. We calculated the predicted energy needs of the building type, and were able to reduce that number to approximately 75% of CBECS baseline. With narrow floor plates, we are able to balance daylighting and solar heat gain to lower the lighting power density. This also enabled us to configure the floorplates to allow natural ventilation for night cooling, to reduce loads. 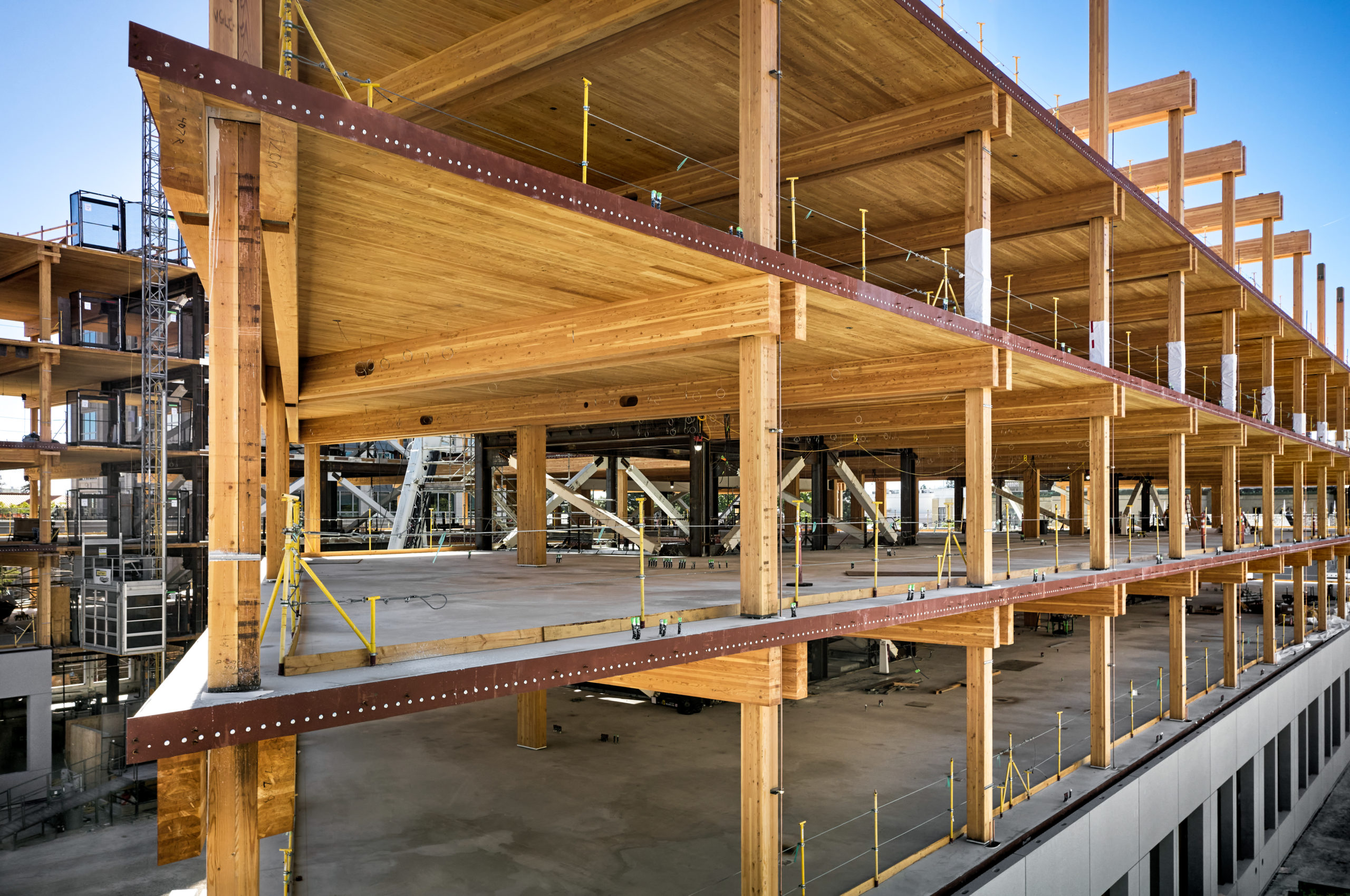 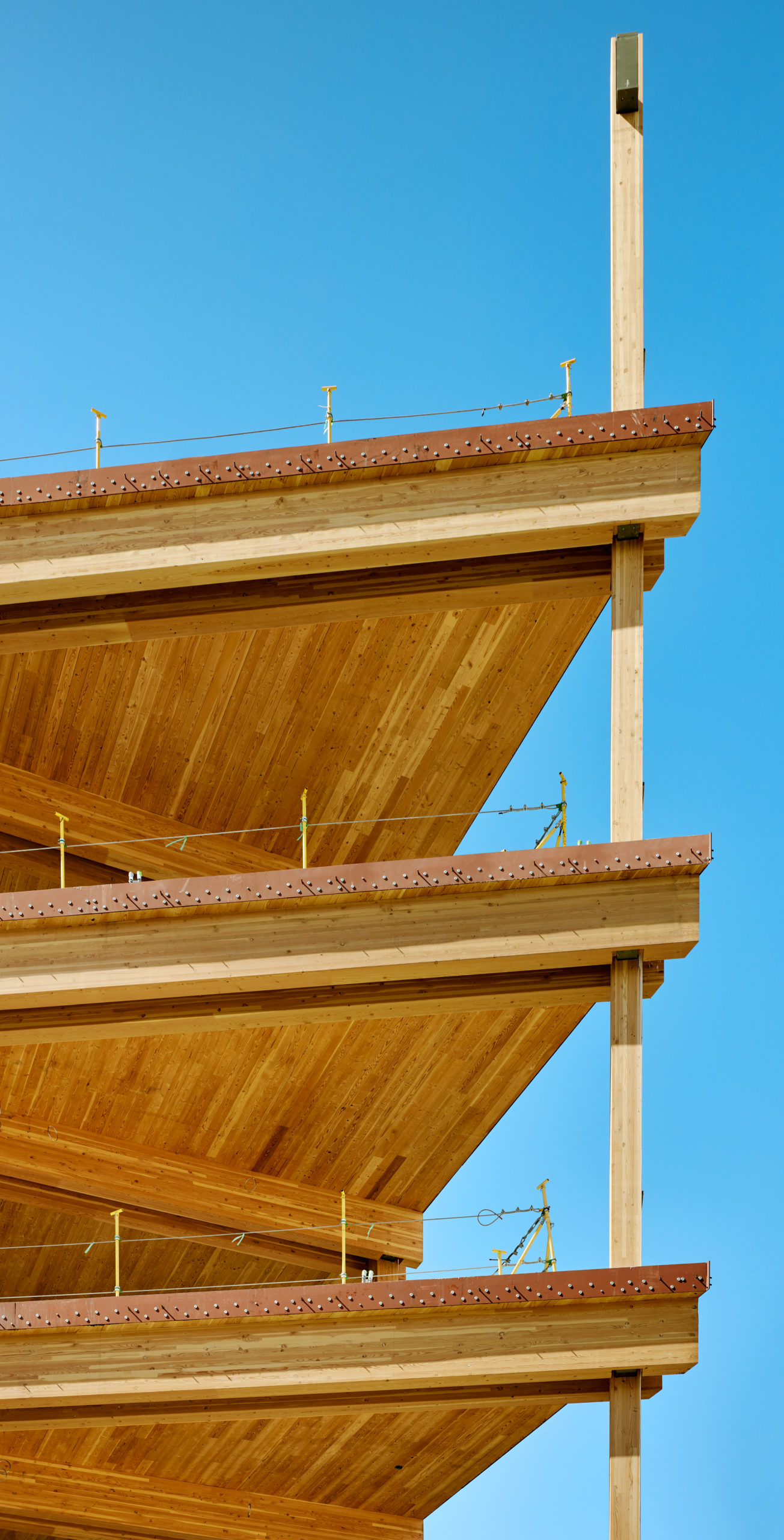 The design optimized the active systems, tailoring the mechanical equipment to its use, leveraging efficient hydronic fan coil units at the perimeter and VAV air distribution at the interior core spaces. The interior design strategically places the engineering systems within centrally located cores to minimize distribution distances for most effective services. The exterior windows have automated window shades that reduce solar heat gain and reduce glare.

Once the design loads were reduced, the energy required to operate the building was offset by on-site renewable energy generated by photovoltaics on the project’s roof and the roof of the nearby parking garage, making it a net-zero operational energy building. In addition to being net-zero operational energy, the project has reduced its embodied carbon by 70% primarily by using advanced structural technologies, including Cross Laminated Timber slabs, with Glued Laminated Timber beams and columns. 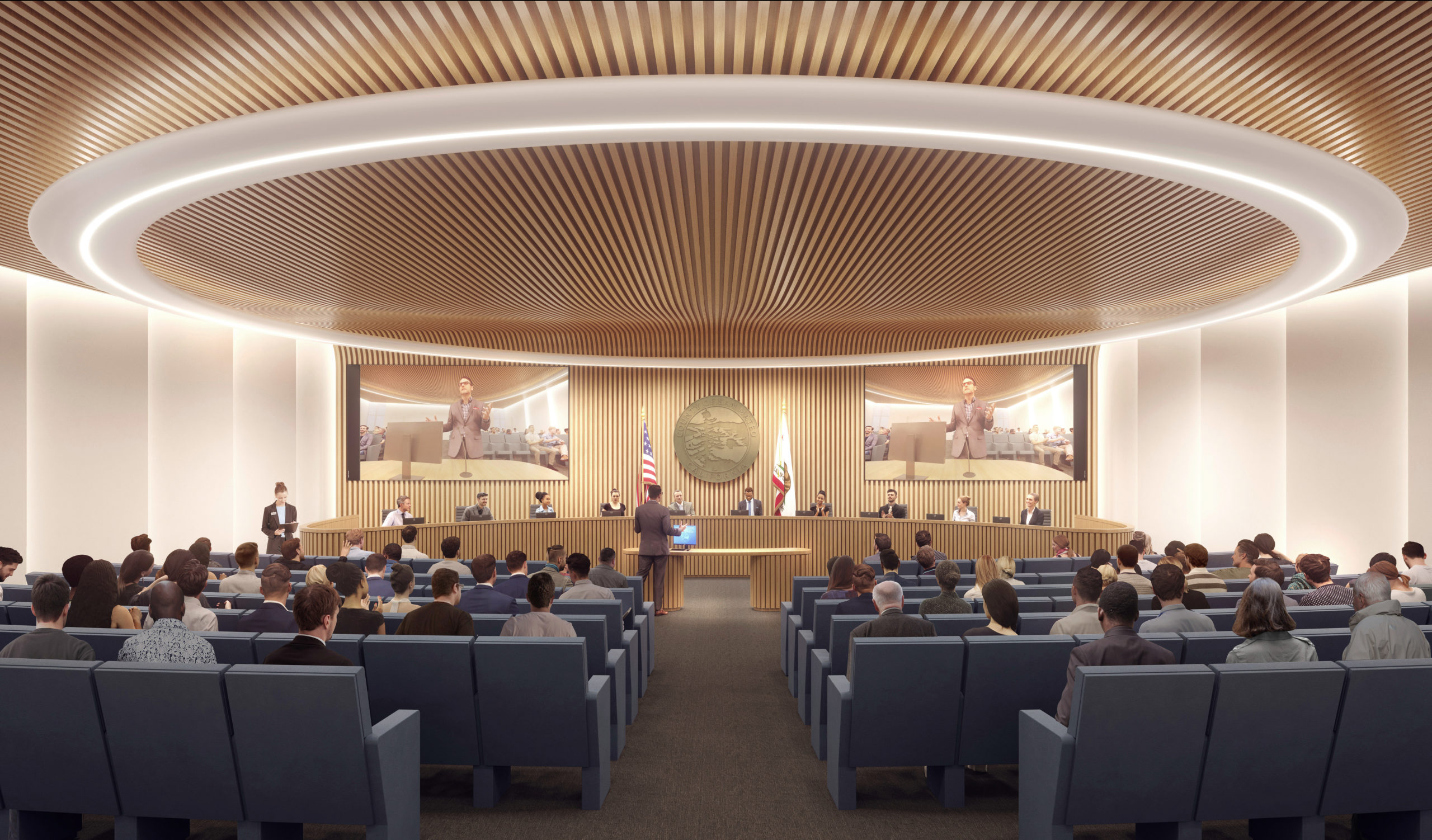 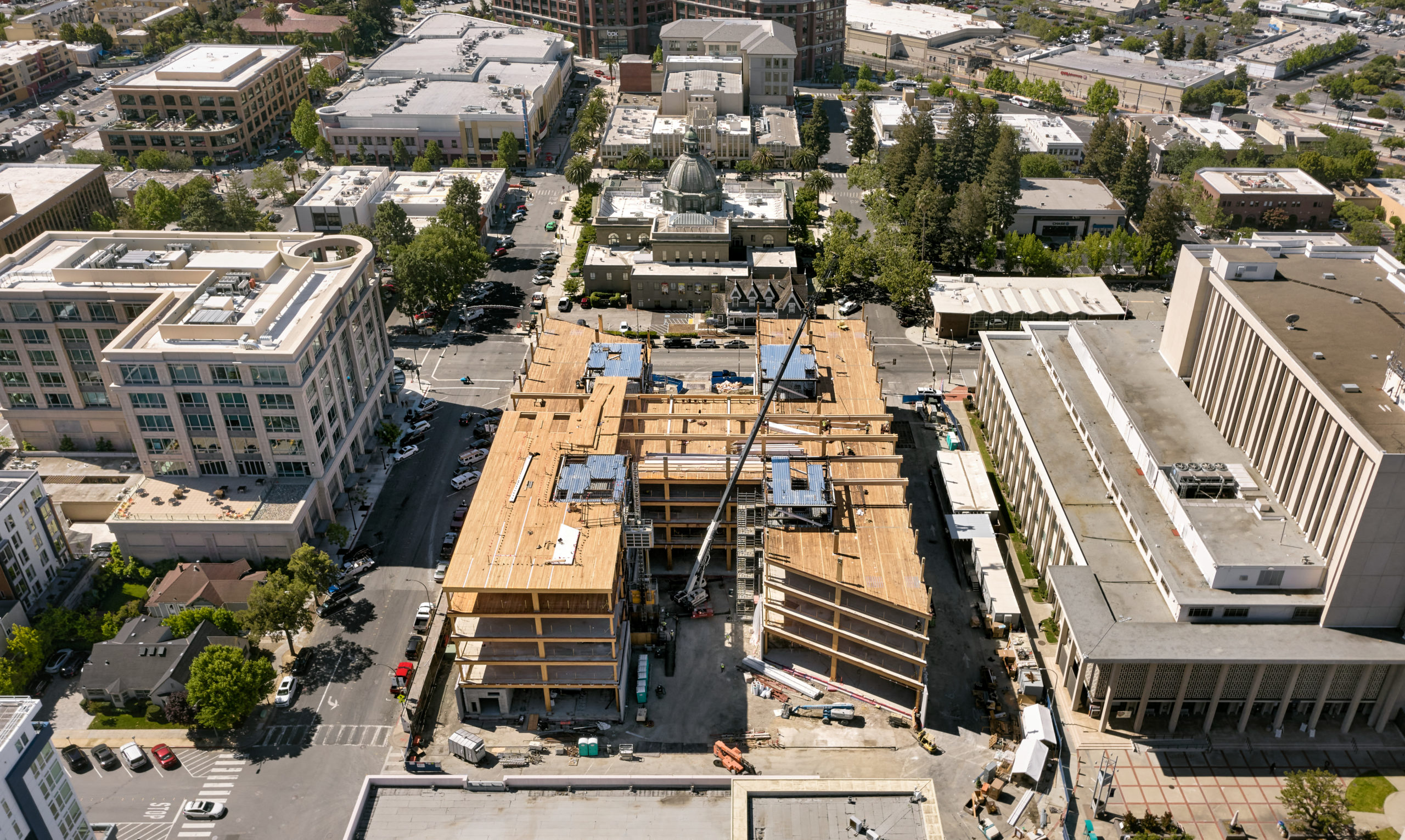 Planning for COB3 started at the beginning of last decade, though the last two years have dramatically shifted how county leaders approached the project, with a greater focus on sustainability, public health, and new public open space.

Construction is expected to cost around $182 million. The project aims to achieve LEED Platinum certification. Truebeck is the general contractor, MEYERS+ is the MEP engineer of record, and SOM is the structural engineer of record.

Demolition for the project started in 2019, which included the demolition of 500 County Center and the moving of the Lathrop House, a historic house built in 1863. The historic building was moved in 1905 to 627 Hamilton Street. It now resides across the street at 701 Hamilton Street.

Concrete pouring for COB3 finished in December of last year, 2021. With topping out happening now, the building appears set to open up next year, as scheduled. Once complete, the offices will be able to have around five to six hundred employees on-site.