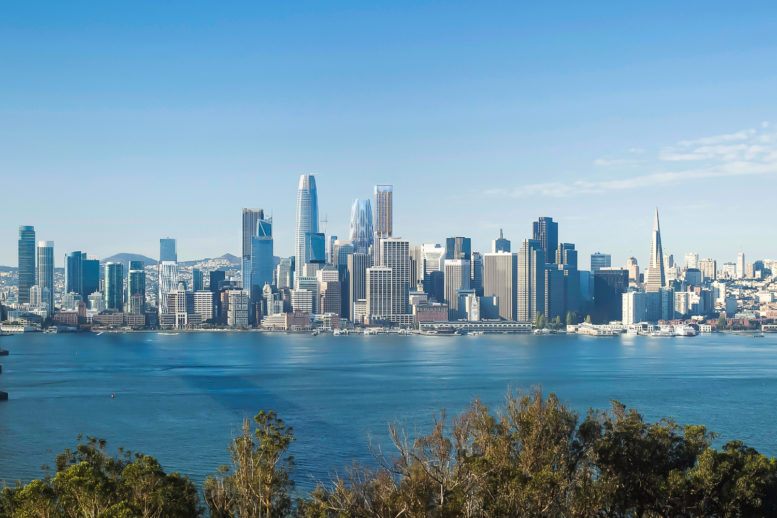 The proposed 50 Main Street tower has shrunk by 74 feet. Hines has published new plans for the city’s potential second-tallest skyscraper, following San Francisco Planning Department recommendations. The updated plans show that 50 Main Street is now proposed to rise 992 feet tall, which does still retain its position as the city’s second-tallest building. Along with this revelation, the documents provide new insight into the Atlas Block campus. Foster + Partners is the architect for 50 Main Street. 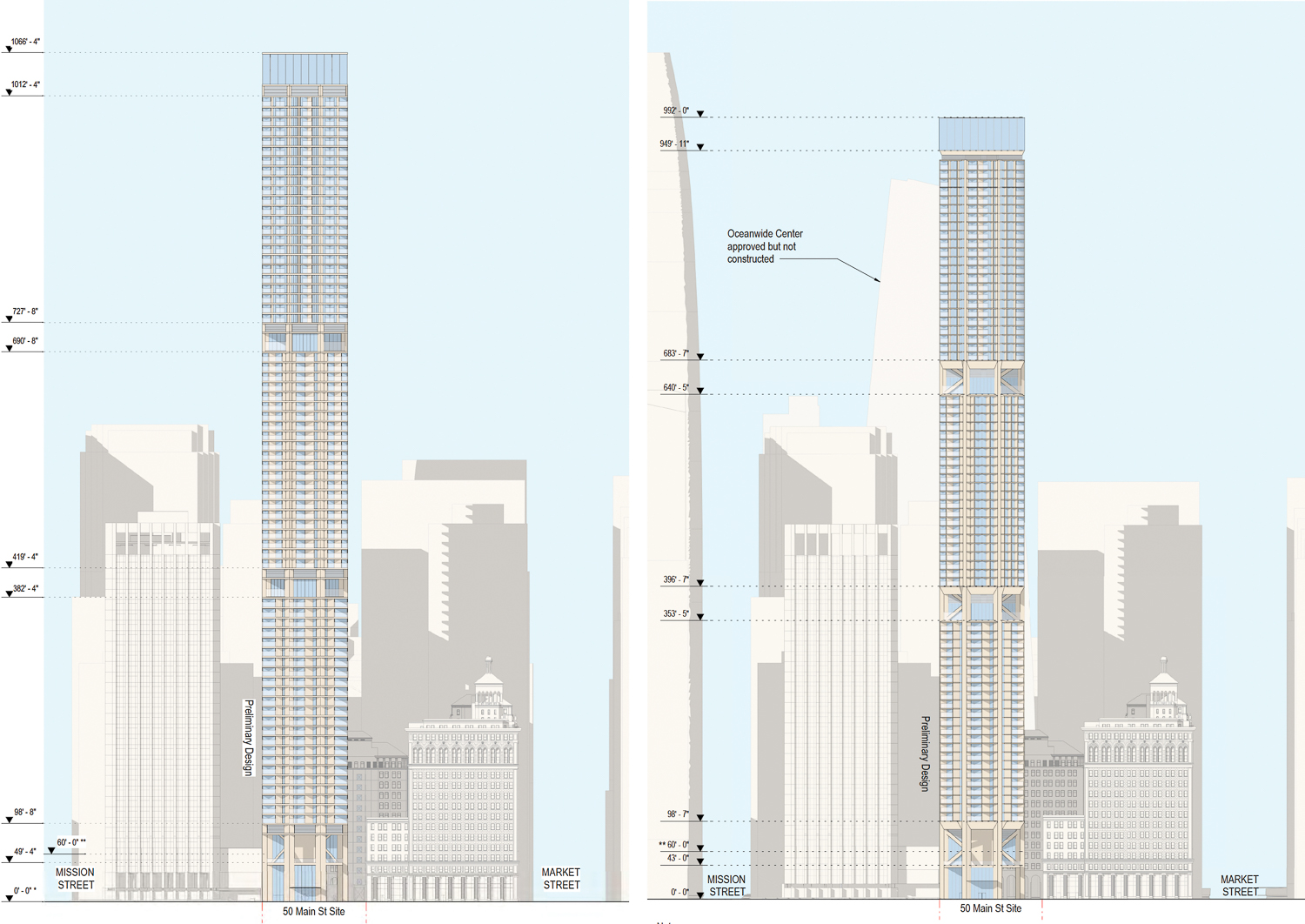 Side-by-side comparison of the first and second plans for 50 Main Street, facade elevation view from along Main Street, elevations by Foster + Partners

In mid-April, the city’s Planning Department published a letter providing staffing comments on the proposal for Atlas Block, formerly the headquarters of the troubled state utility company, Pacific Gas and Electric. The following provides a detailed look at what the city recommended change for the plans, and how the new planning application by Hines addresses the letter’s notes and concerns.

It was no surprise when the city rebuffed the proposed 1,066-foot rooftop height for 50 Main. The original height for 50 Main would have come within four feet of the city’s tallest skyscraper, the Salesforce Tower. In the letter, the city planners wrote that the initial plan “conflicts with the city’s goal of establishing a balanced skyline as seen from key public viewpoints within the city and region.” 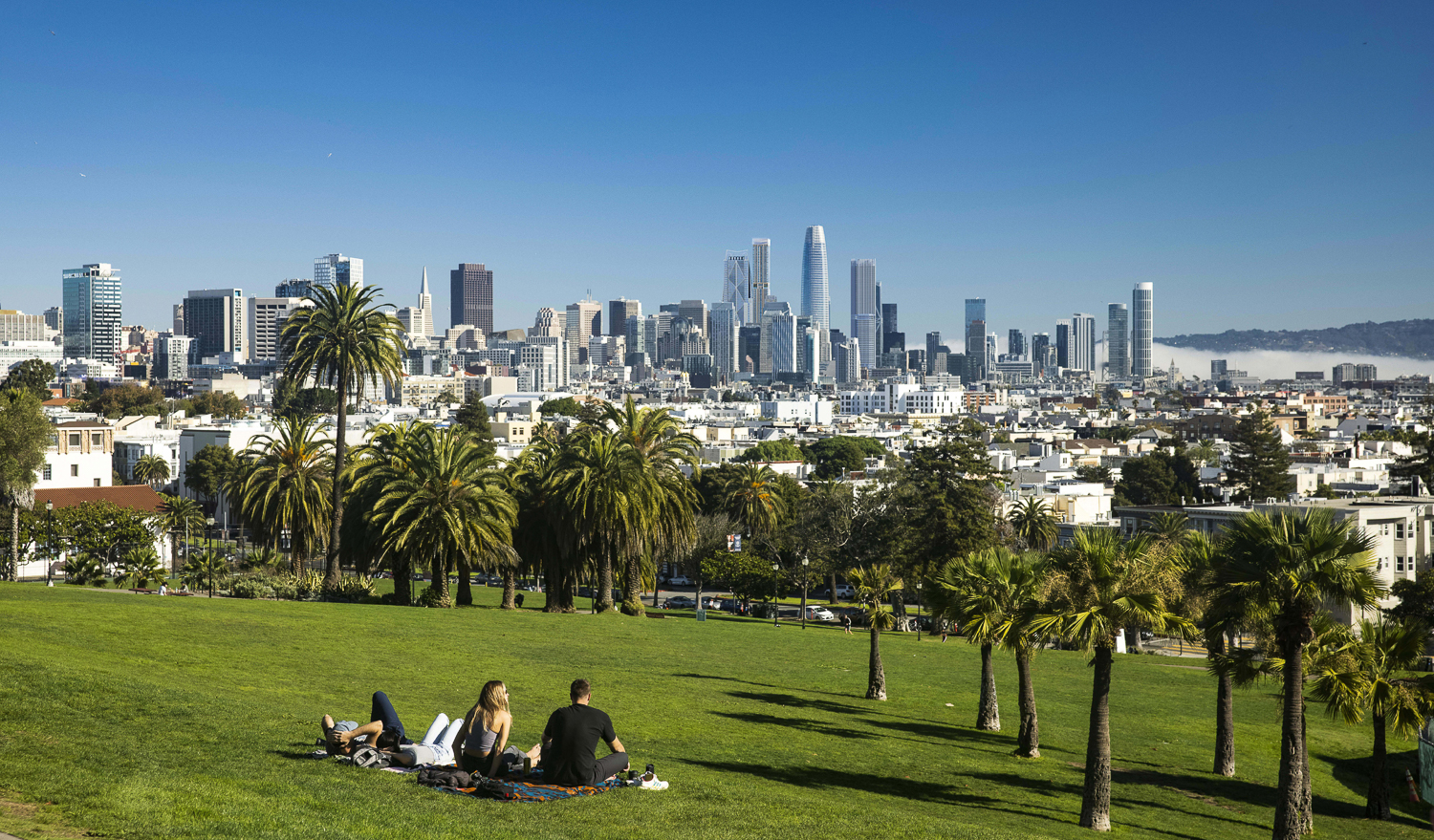 Hines appears to have followed this direction, lowering the overall height to 992 feet while retaining the 808 originally proposed units. The project will still be classified as a supertall skyscraper, which must be at least 984 feet or 300 meters tall.

The 89-story building will yield 1.29 million square feet, with 996,600 square feet for residential use and 145,180 square feet for the 338-car garage. The site will feature 808 homes with 225 studios, 379 one-bedrooms, 200 two-bedrooms, and four penthouse three-bedrooms. Of the units, 20.5% will be designated as affordable housing. That equates to roughly 166 units. Amenity space will be spread across the building with ground-floor open space, two forty-foot high terraces on the tower, and the rooftop lounge. 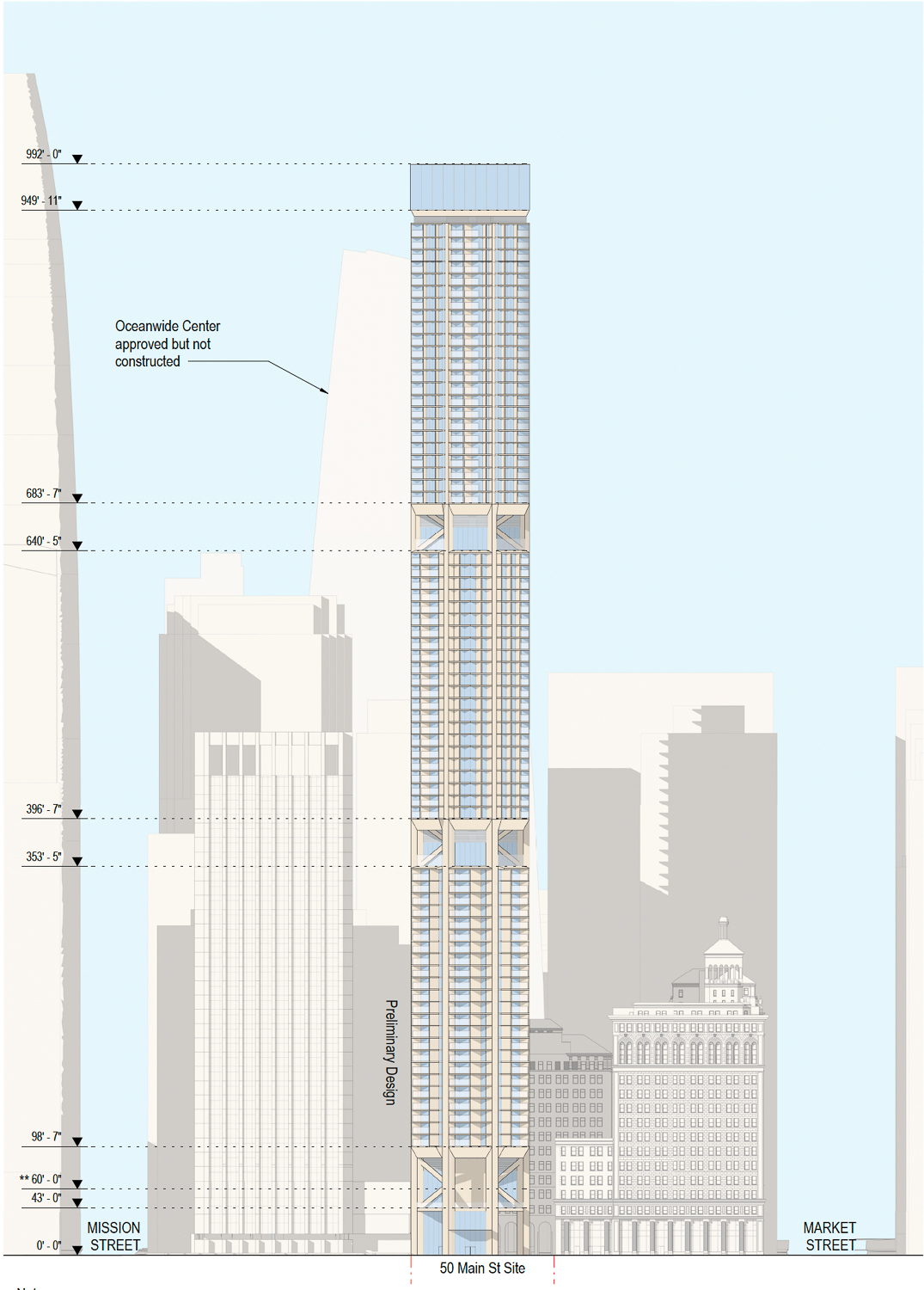 The design by Foster + Partners aims to integrate several best practices of sustainable architecture. Once complete, the building will be all-electric, reducing fossil fuel dependence and greenhouse gas emissions. Units will provide glazed and solid elements to provide thermal shading, with natural ventilation to minimize energy use for interior climate control. The structural and exterior materials will be of high quality. For the pedestrian, the tower expresses a vision for integrating cities with nature with a lifted base to make room for a grove of redwood trees. 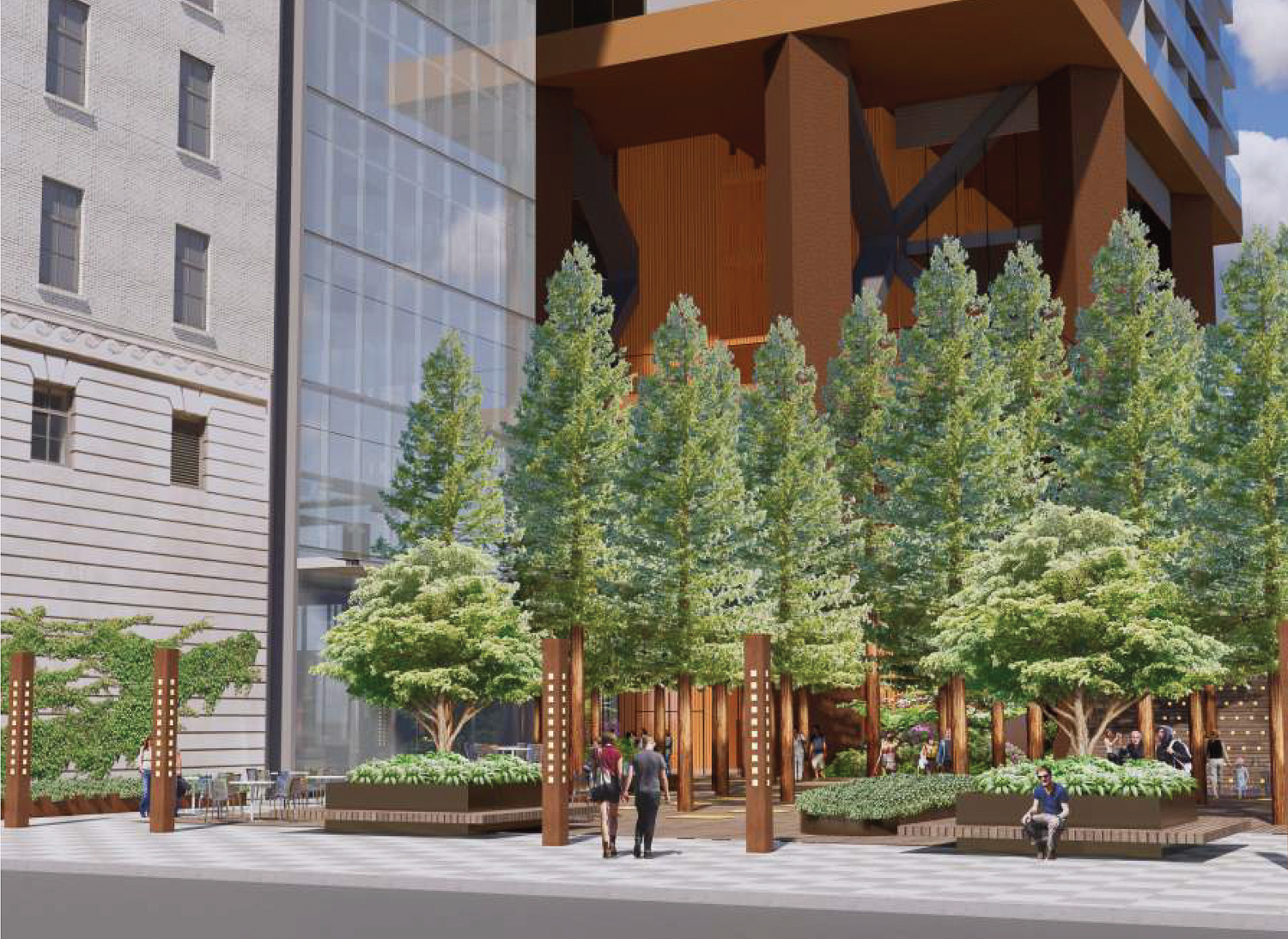 The staff provided two further comments on the residential supertall. One was that the base project did not comply with the city’s planning code. As staff writes, “At this time, it does not appear that the 50 Main Street base project strictly conforms to all requirements of the Planning Code. The bonus calculation allowed under the State Density Bonus must be based on demonstrated fully-code compliant project that does not require any variances or discretionary exceptions from the standards in the planning code.” In particular, it did not comply with rear yard requirements. The base project rises 400 feet tall with 462 units across 677,000 square feet. 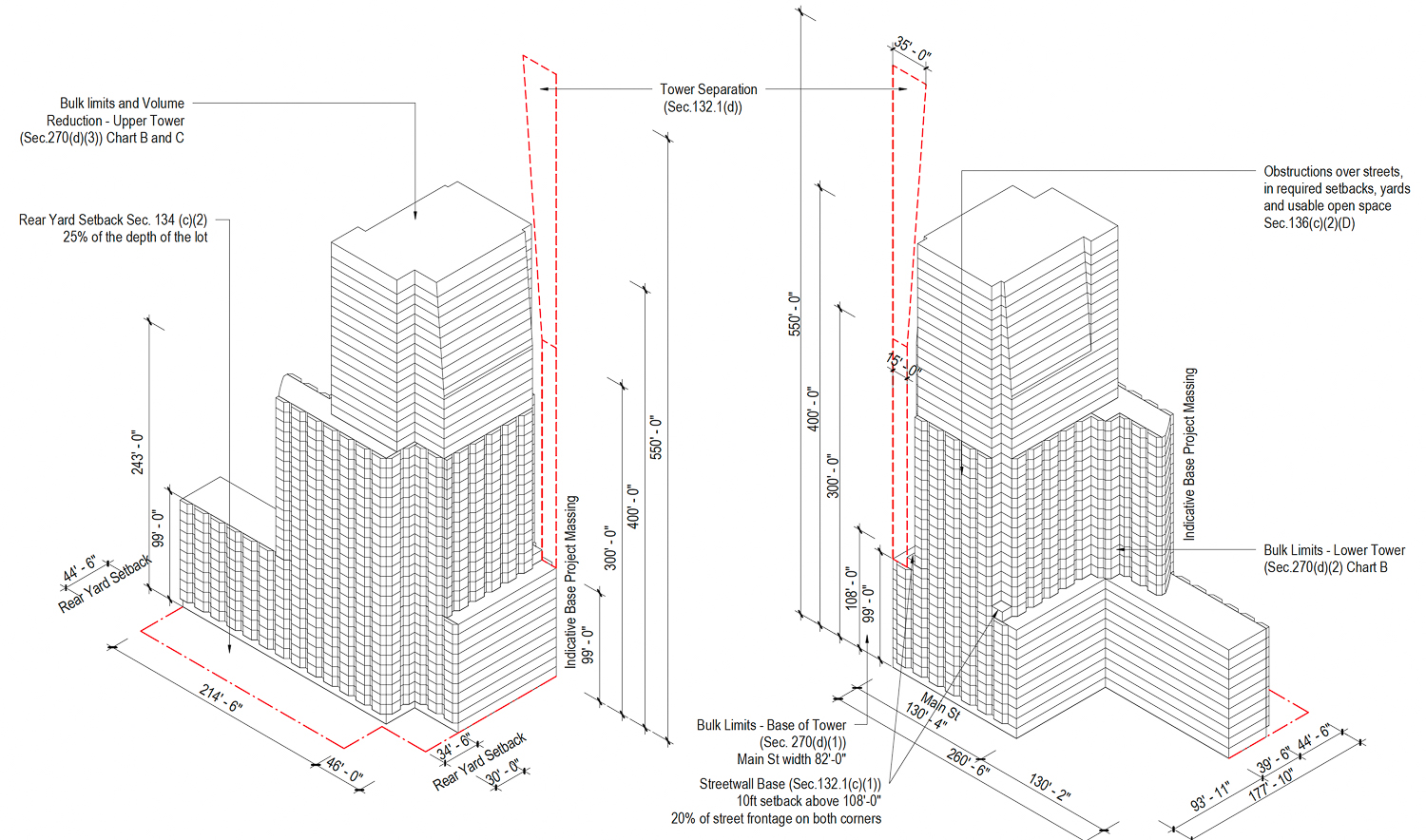 50 Main Street updated design for the base project, illustration by Foster + Partners

The final comment for 50 Main Street was a request for two renderings that illustrated the skinny skyscraper beside two approved projects, Oceanwide Center and 550 Howard Street. These new renderings show the residential tower looming over the 910-foot tall Oceanwide. The construction site, which features one of the most highly anticipated design​​s by Foster + Partners in collaboration with Heller Manus Architects, remains stalled at ground level with no foreseeable future for construction.

Regarding 77 Beale Street, to be readdressed as 200 Mission, staff suggested that the project team expand the ground floor activation to pedestrians and rearticulate the necessity of the exterior modifications. The letter writes that “…the proposed redesign would require a bulk exception the department may not support, as well as a Planning Code amendment for the architectural crown feature.” 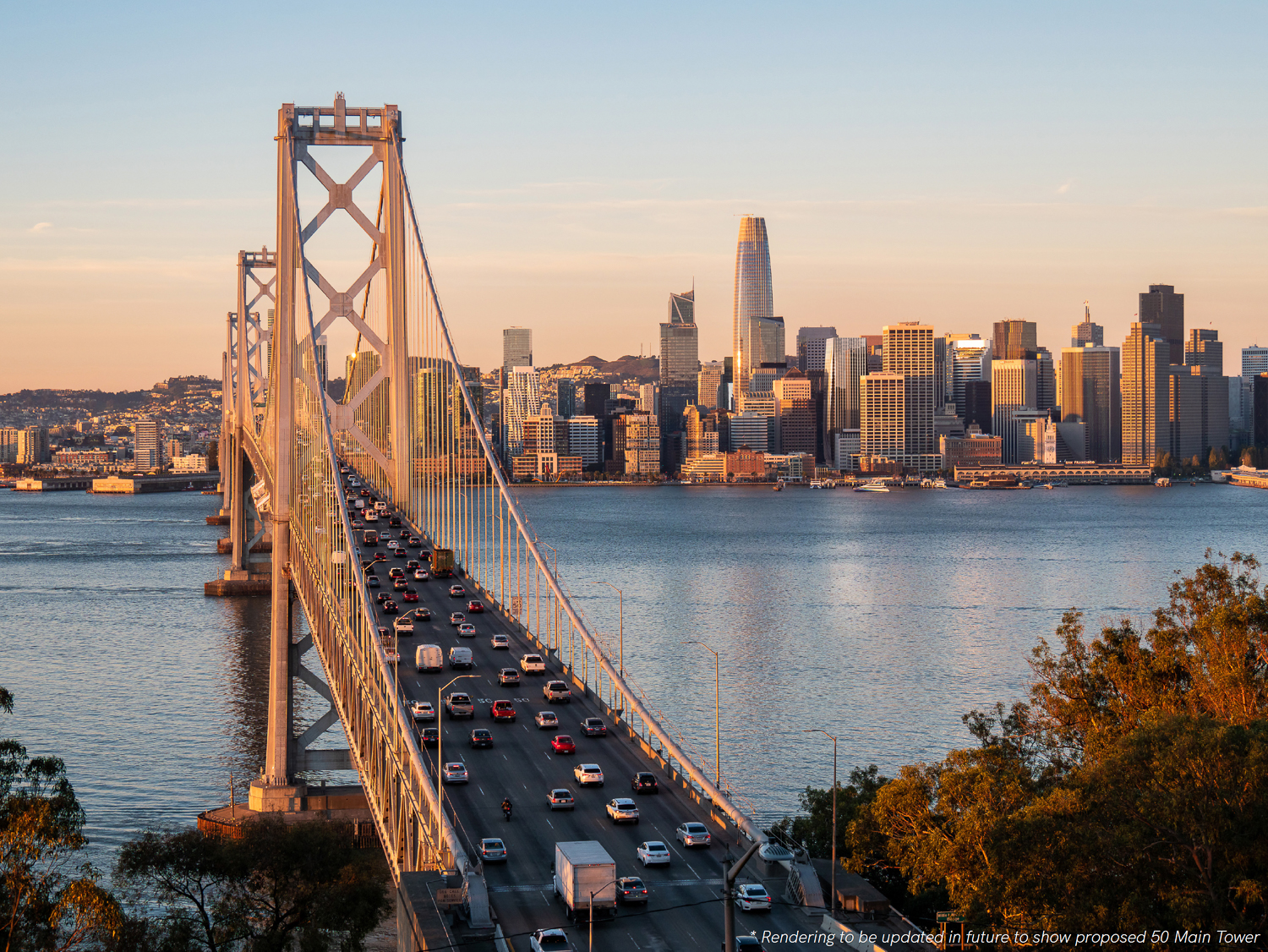 As for the ground level connections, the letter expresses that “the Department does not support the location of retail above the ground floor at 77 Beale, nor the raised parking/terrace portion of the ground floor primarily fronting along Main Street.” 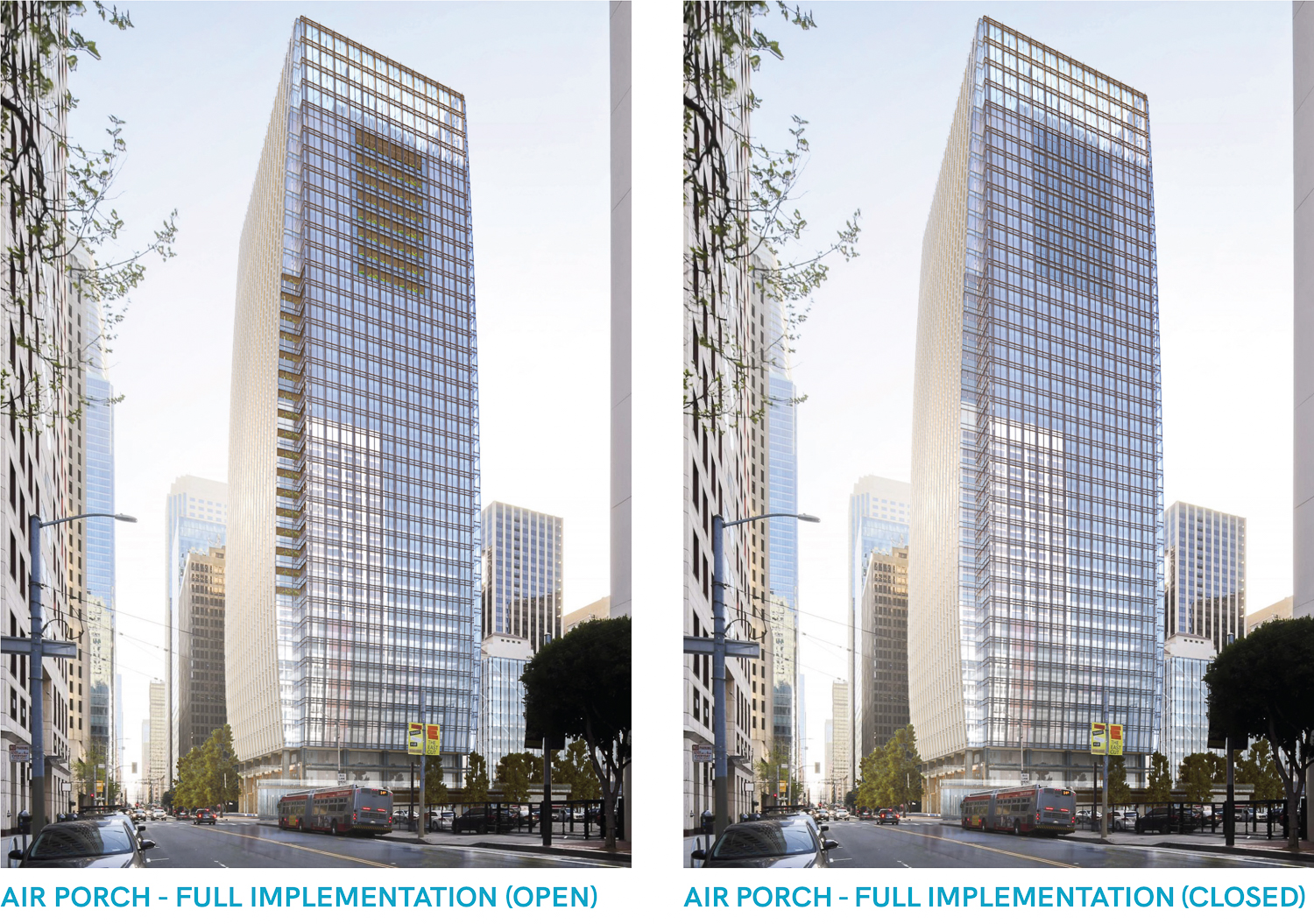 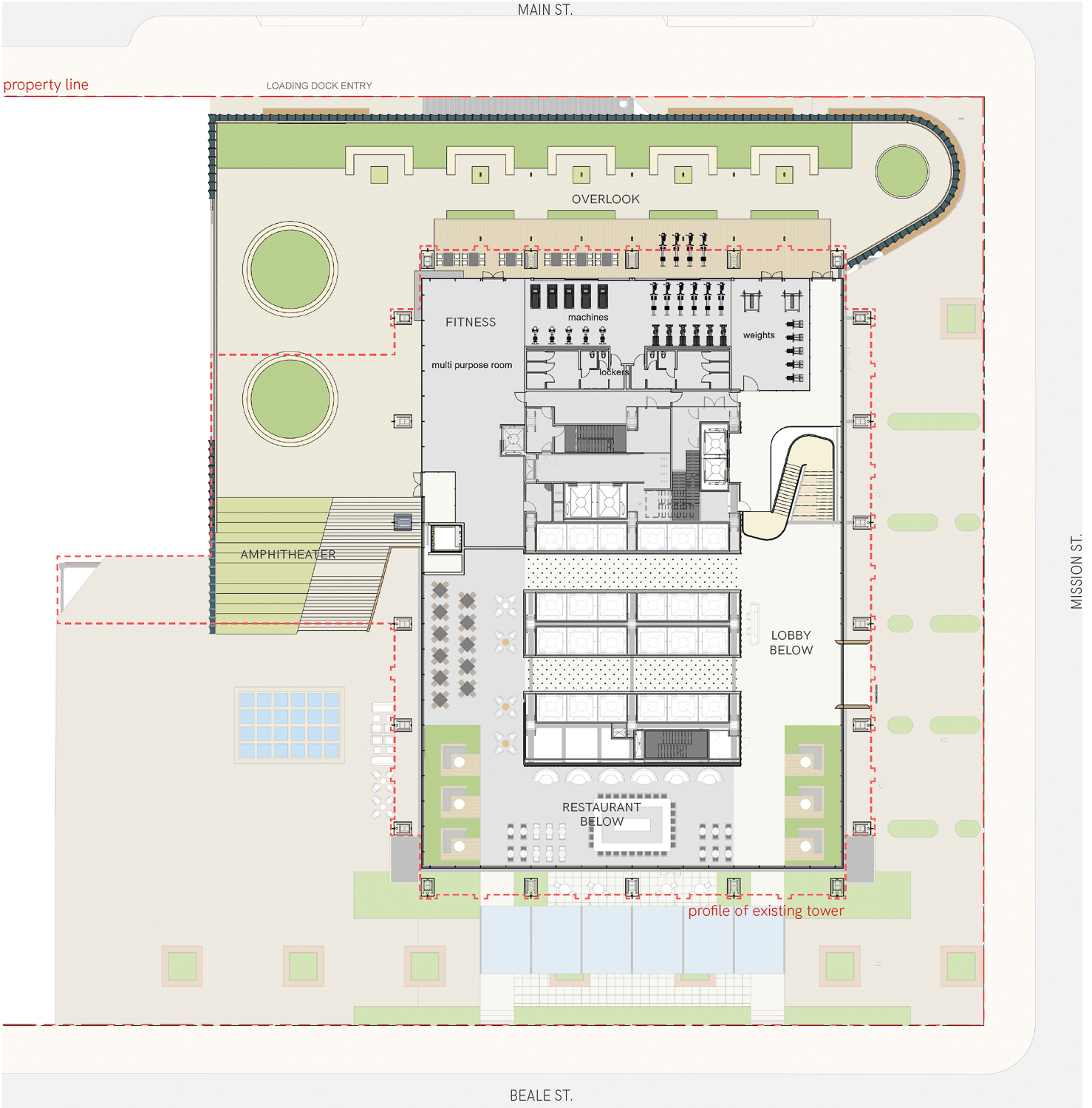 Hines responded to the planning department’s inquires about the necessity of an exterior reskinning within the building’s design narrative, writing that the “modern high-performance MEP systems, glass coatings, and passive solar shading devices will dramatically improve the efficiency of the building and reduce its carbon footprint. Increased access to natural light, views, fresh air, and flexible interior and exterior work areas will benefit the health, quality of life, and efficiency of future tenants.”

Pickard Chilton, architect for 200 Mission and the Market Street Buildings, describes that their proposed reskinning will be “a glistening crystalline skin wrapping in an unexpected and sculptural form, will be an iconic moment in the city’s skyline and a welcoming beacon within the heart of the city. At the top of the tower a ‘Sky Garden’ with mature trees and planting behind a sculptural architectural crown is proposed.” 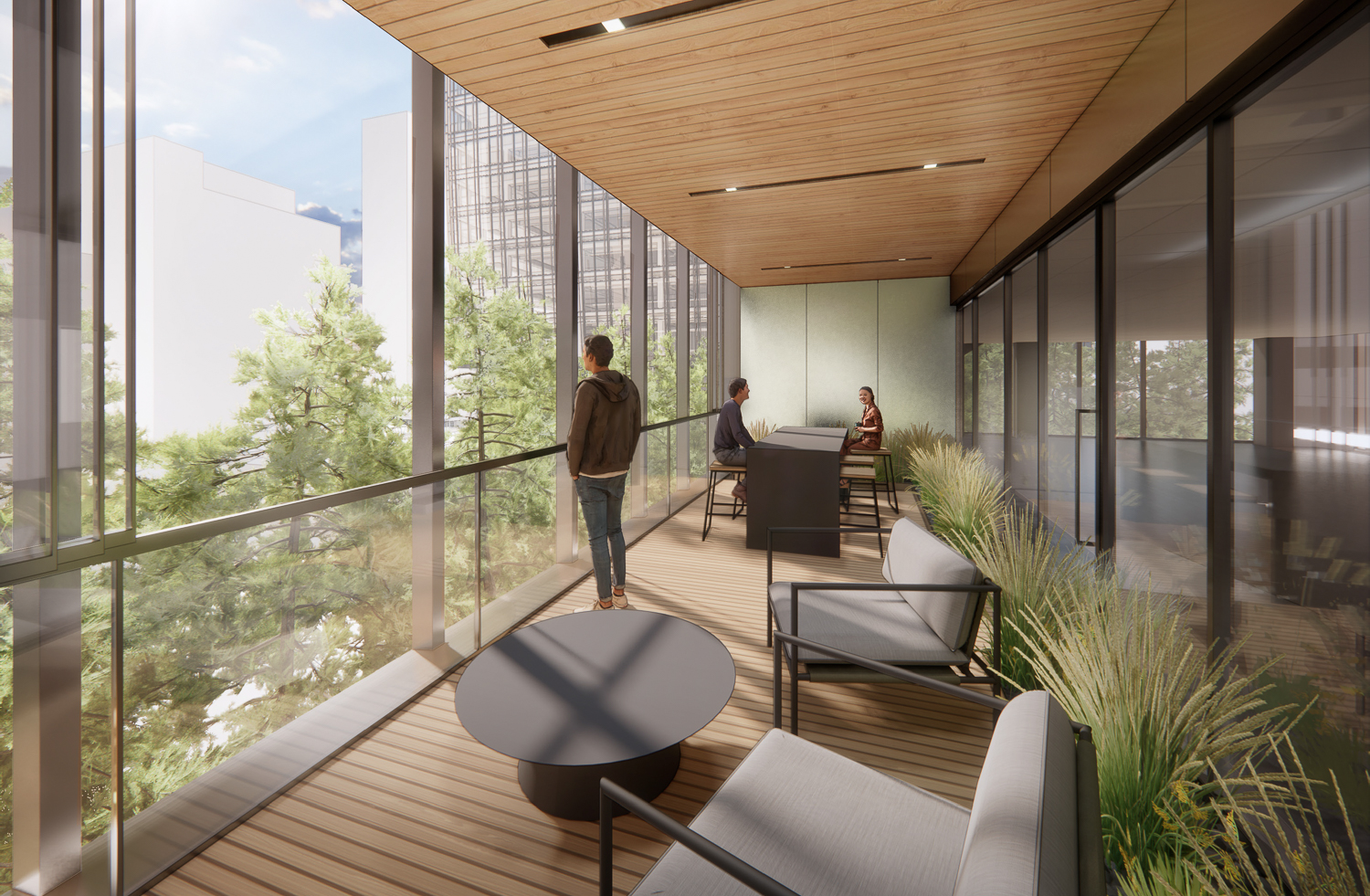 Air porches are newly proposed design elements proposed by Pickard Chilton for both 200 Mission and the Historic Complex. The air porches will create a sheltered space with operable windows to access the open air with improved views of the city while minimizing the impact of the decks on the exterior facade.

The staff provided additional clarity and recommendations for the Market Street Buildings at 215-245 Market Street. The historic structures will largely be preserved but for some new additions. The staff expressed that the additions could better relate to the historic building by “possibly.. increased solidity and other changes to the fenestration, incorporation of masonry cladding (even if not as a primary material), coloration, and/or other approaches.” 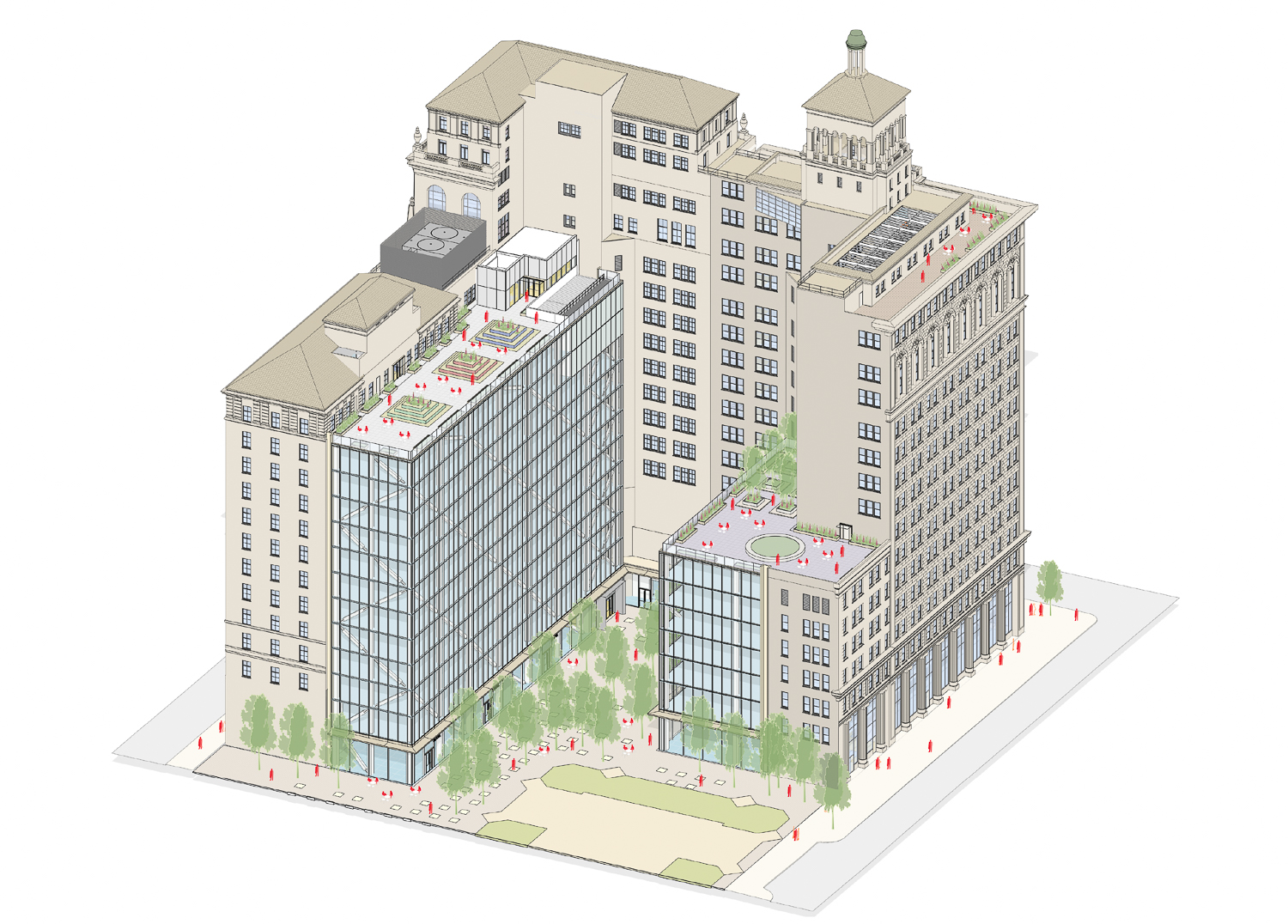 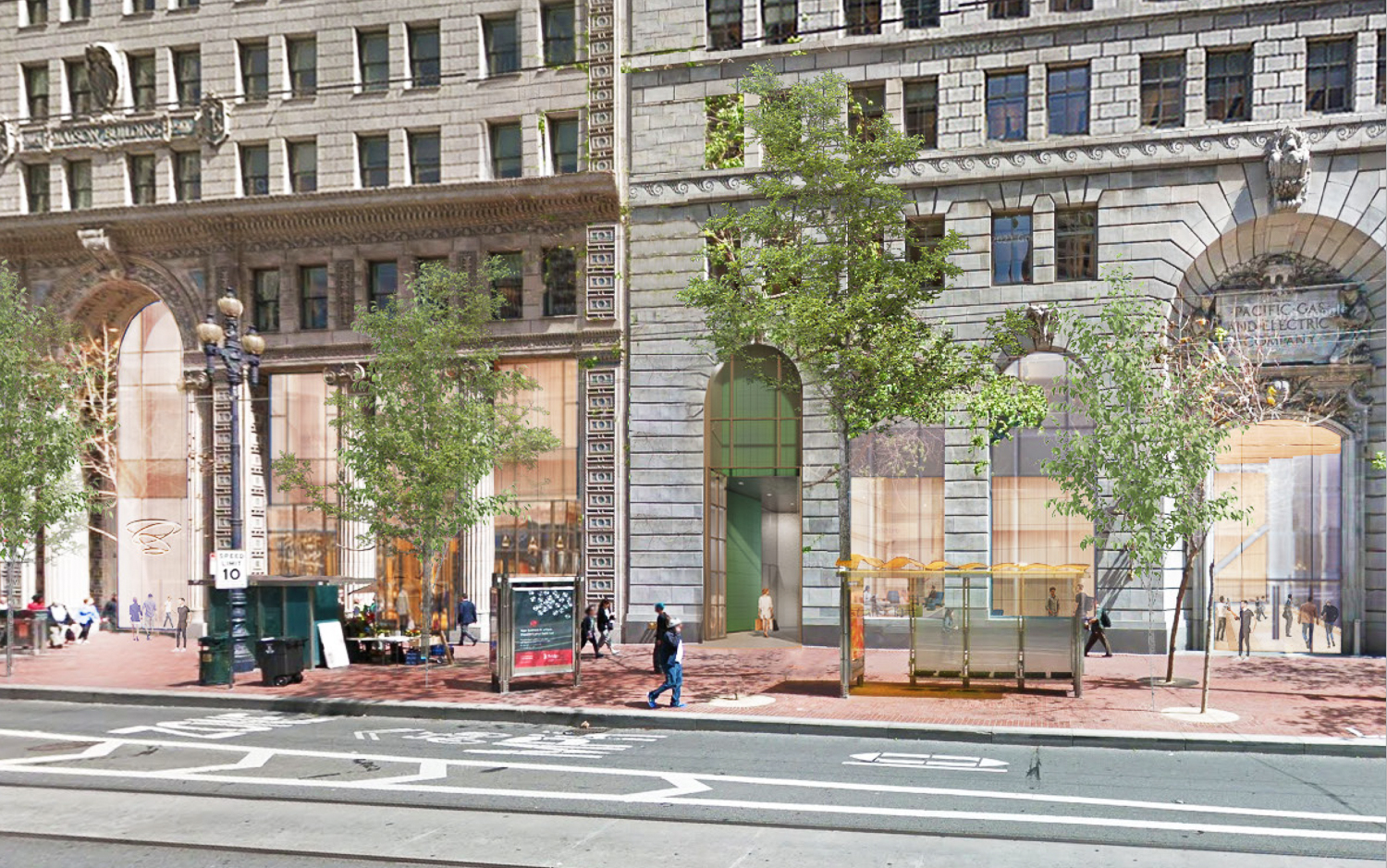 The letter explains that the overall proposal is a single project, and thus all will be reviewed by the Historic Preservation Commission.” As for the historic resource review from CEQA, the reskinning of 77 Beale would be presented as demolition of the historic resource, even though it is not a structural demolition.

Atlas Block is 3.5 acres bound by Market Street, Mission street, Main Street, and Beale Street. The site is close to the city’s busiest BART Stations along with Muni buses and light rail with “the opportunity to impact ever-increasing numbers of the city’s residents who walk and cycle through this neighborhood,” according to the project team.

The City Park will be 1.25 acres of open space accessible from every side of the block. A publicly accessible passage will go through the middle of the Historic Complex’s Market Street frontage directly into the Redwood Grove. Glowing light fixtures will be mounted on the ground, illuminating the area shaded by the surrounding buildings and tree canopy. The elevated green amphitheater along 200 Mission will connect to The Overlook, adding a new dimension to the public realm. 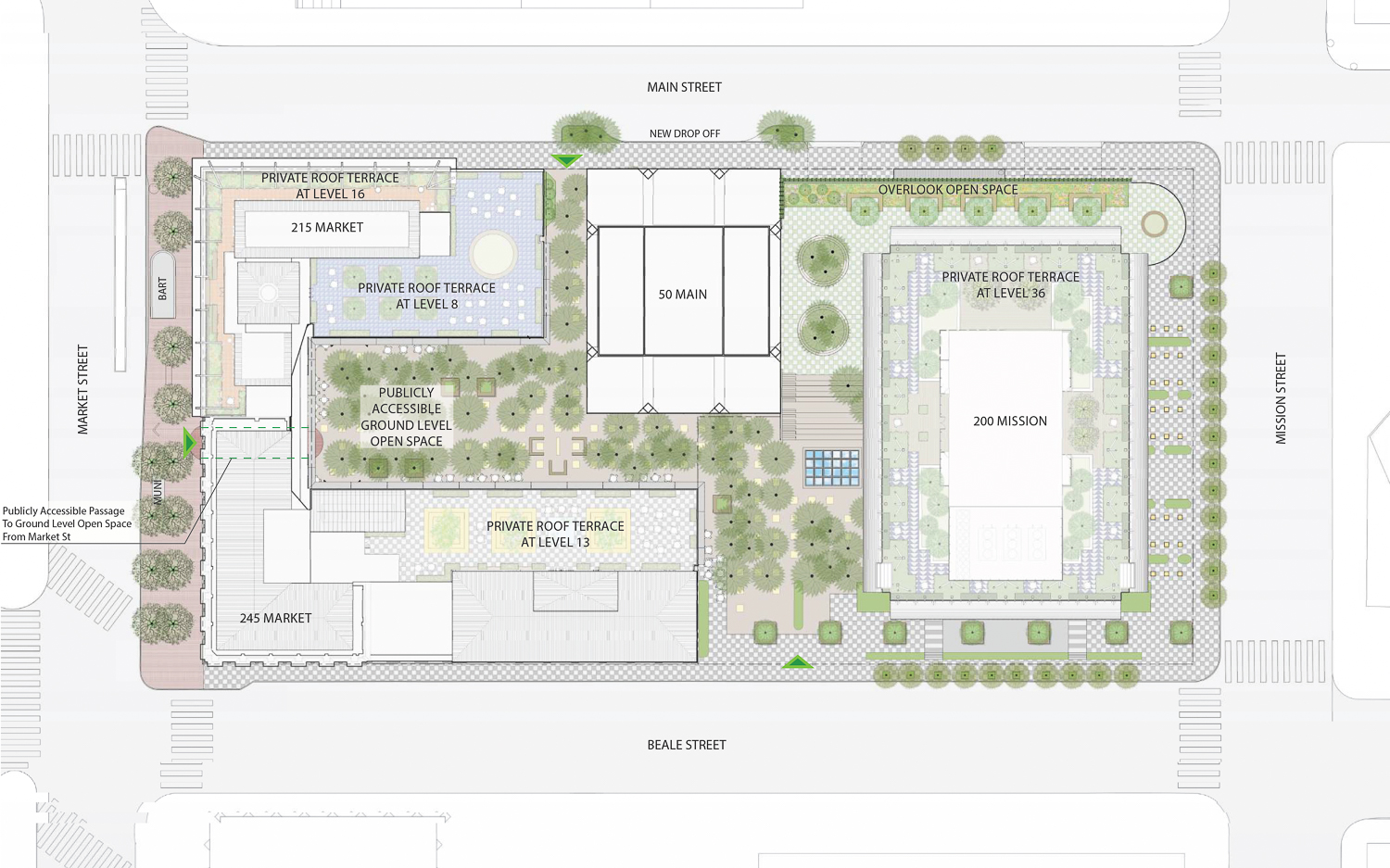 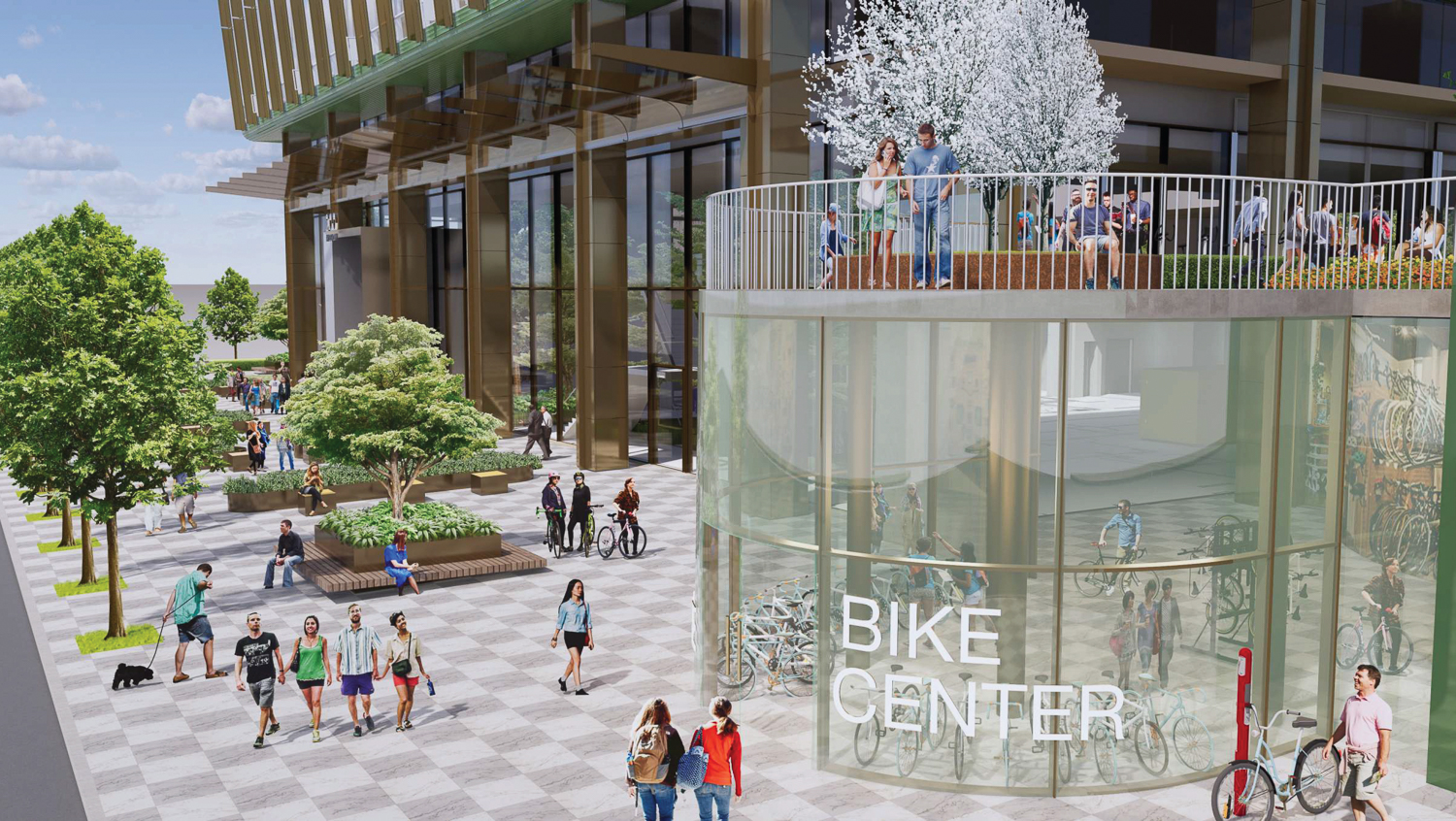 Atlas Block looking west at the corner of Main and Mission, illustration by PWP Landscape Architecture 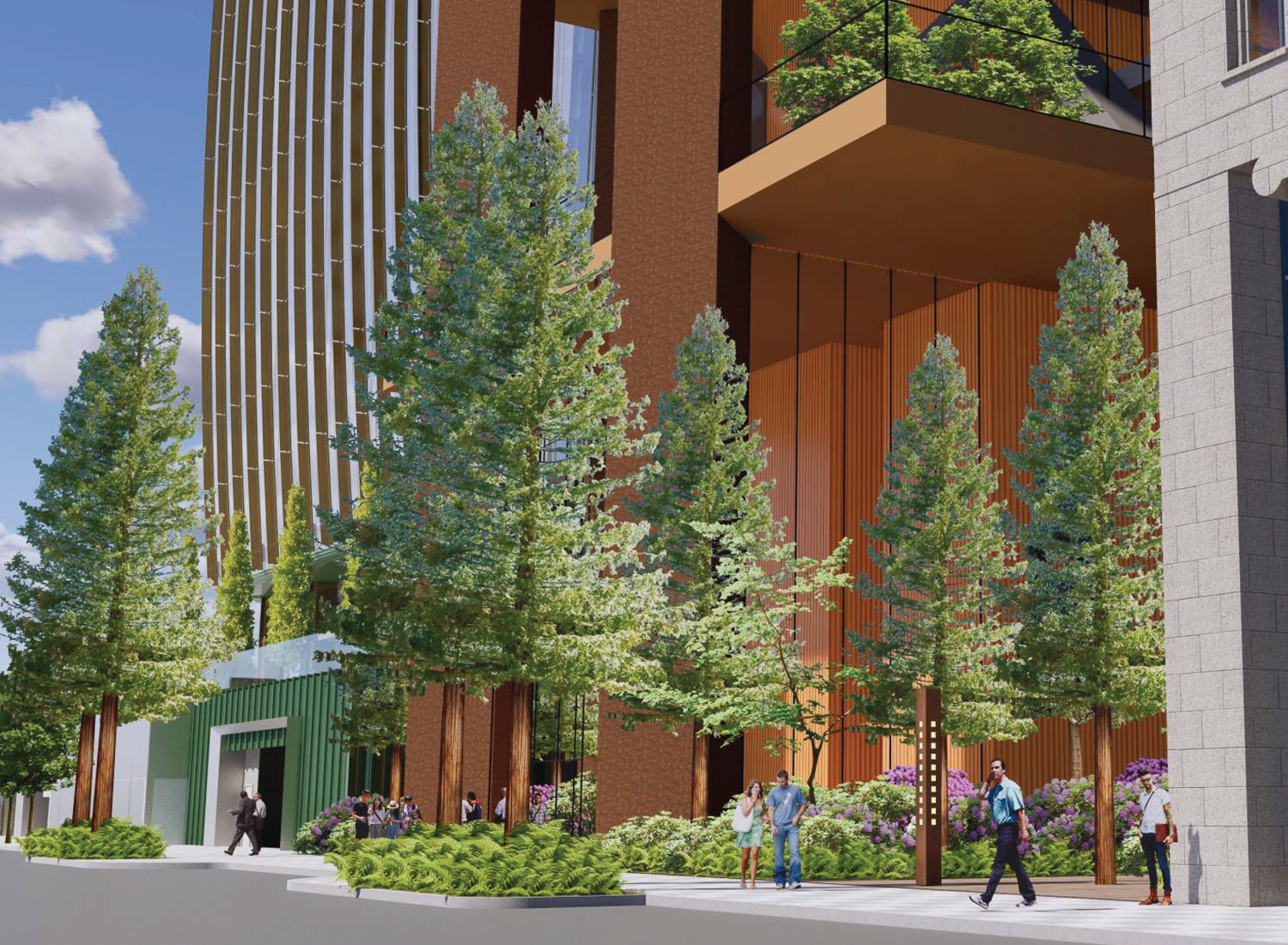 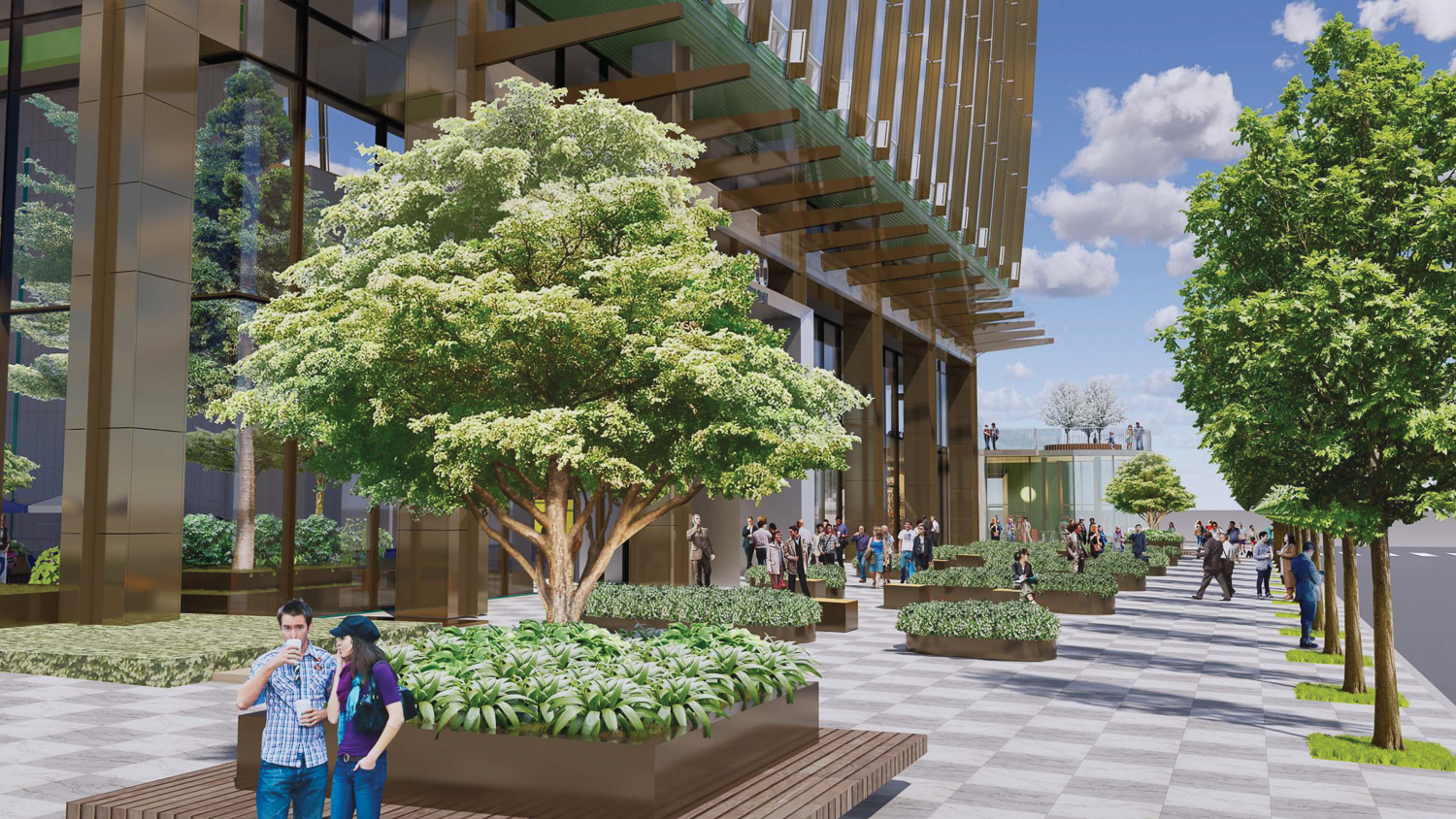 Atlas Block looking east at the corner of Beale and Mission, illustration by PWP Landscape Architecture 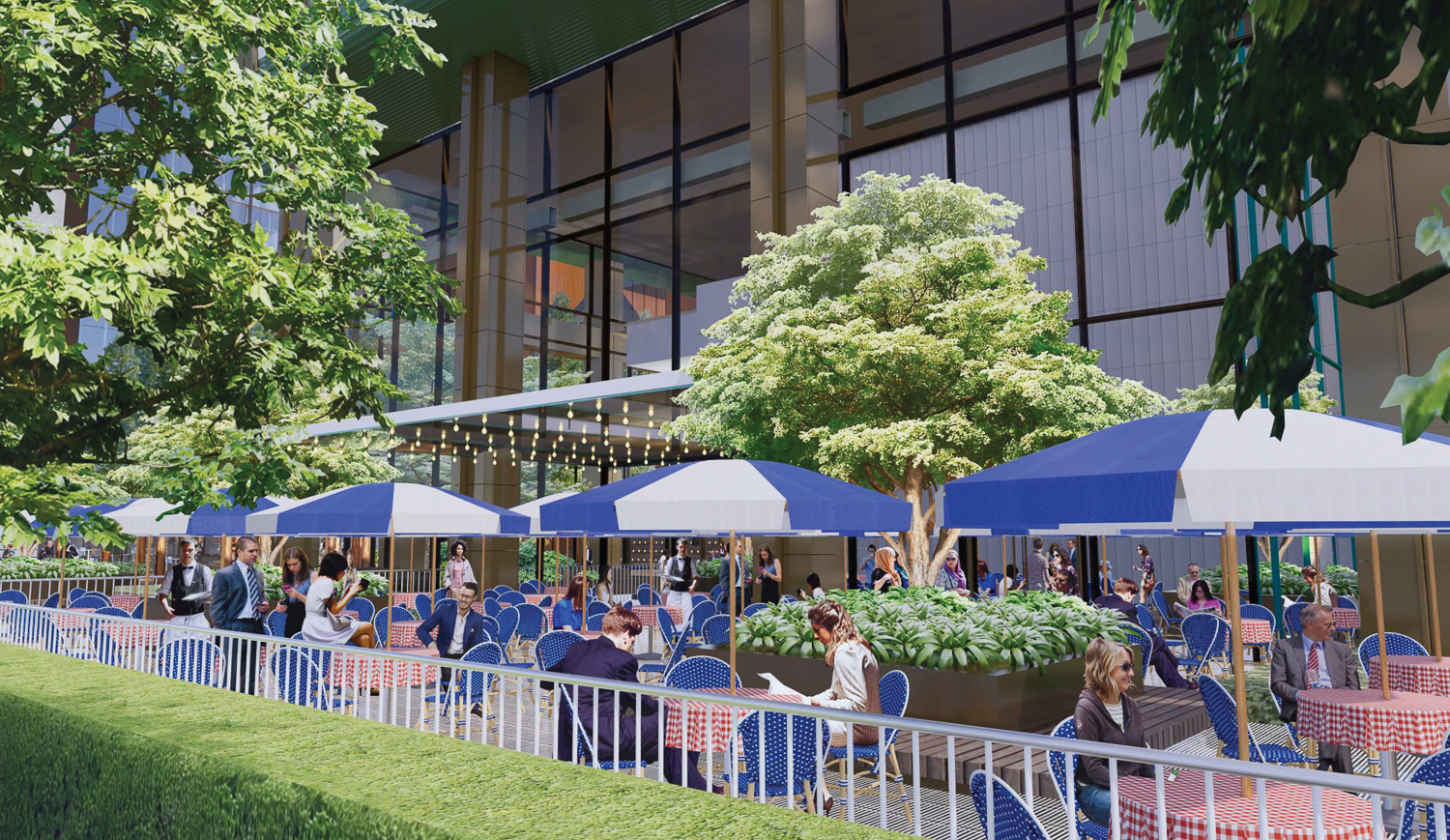 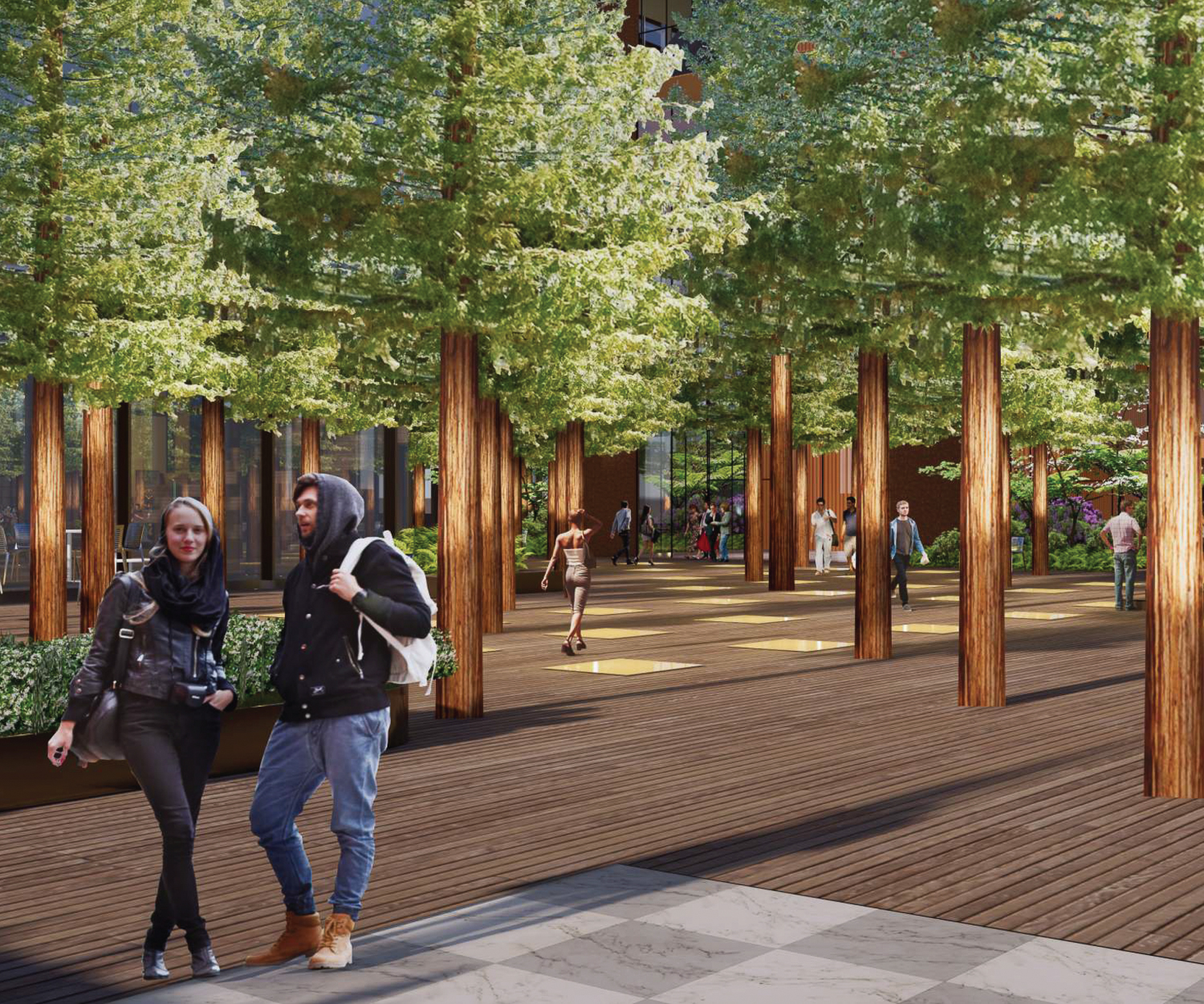 While the plans filed by Hines respond to the city’s recommendations and requests, they will again be reviewed by the planning department for scrutiny. 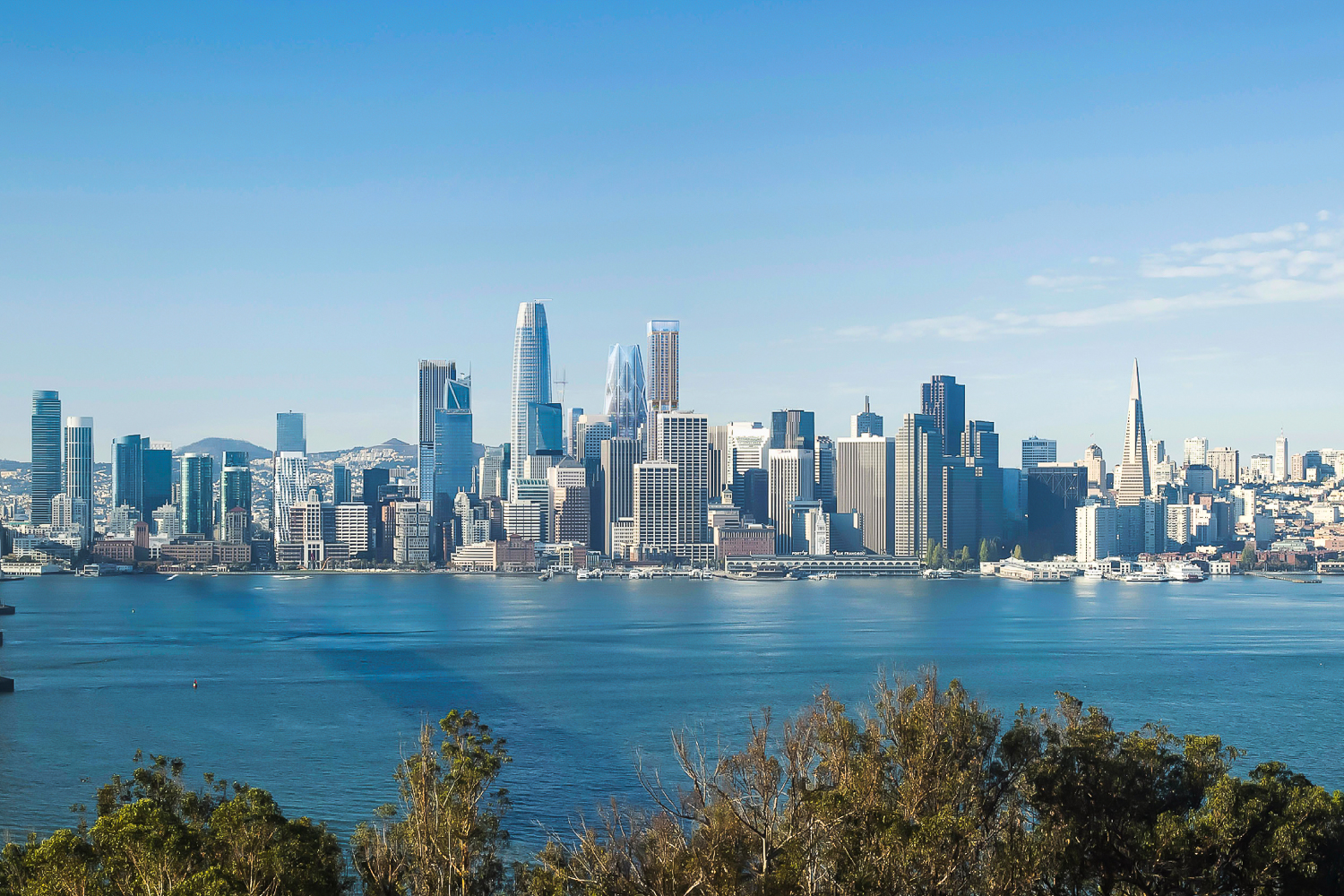 Hines is responsible for the project as the sponsor. Foster + Partners is the design architect for 50 Main, with Pickard Chilton in charge of 200 Mission and the Historic Complex. PWP Landscape Architecture, a Berkeley-based firm, is responsible for designing the public open space and landscaping. Kendall Heaton Associates is acting as the architect of record, and Magnusson Klemencic Associates is the lead structural engineer.

Construction is expected to last four years, with the estimated development cost not yet established. If approval and funding can be achieved smoothly, Atlas could open as early as 2027.