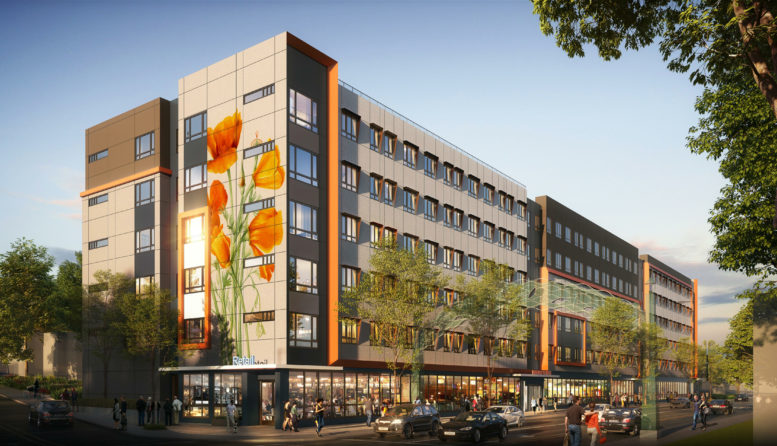 New renderings have been revealed for the six-story residential development at 7300 MacArthur Boulevard in Eastmont, Oakland. The project will replace the vacant parcel with roughly 200 units, including 20 affordable units. RMG Housing, a Los Angeles-based developer, is responsible for the application.

BDE Architecture is responsible for the design. The podium-style project will feature an articulated facade with three massings along MacArthur, defined by distinct colors and setbacks. A public mural will be included along the building’s 73rd Avenue face, designed by a local artist. In renderings, the illustration of a California Poppy is used as a placeholder to illustrate how a mural may look. 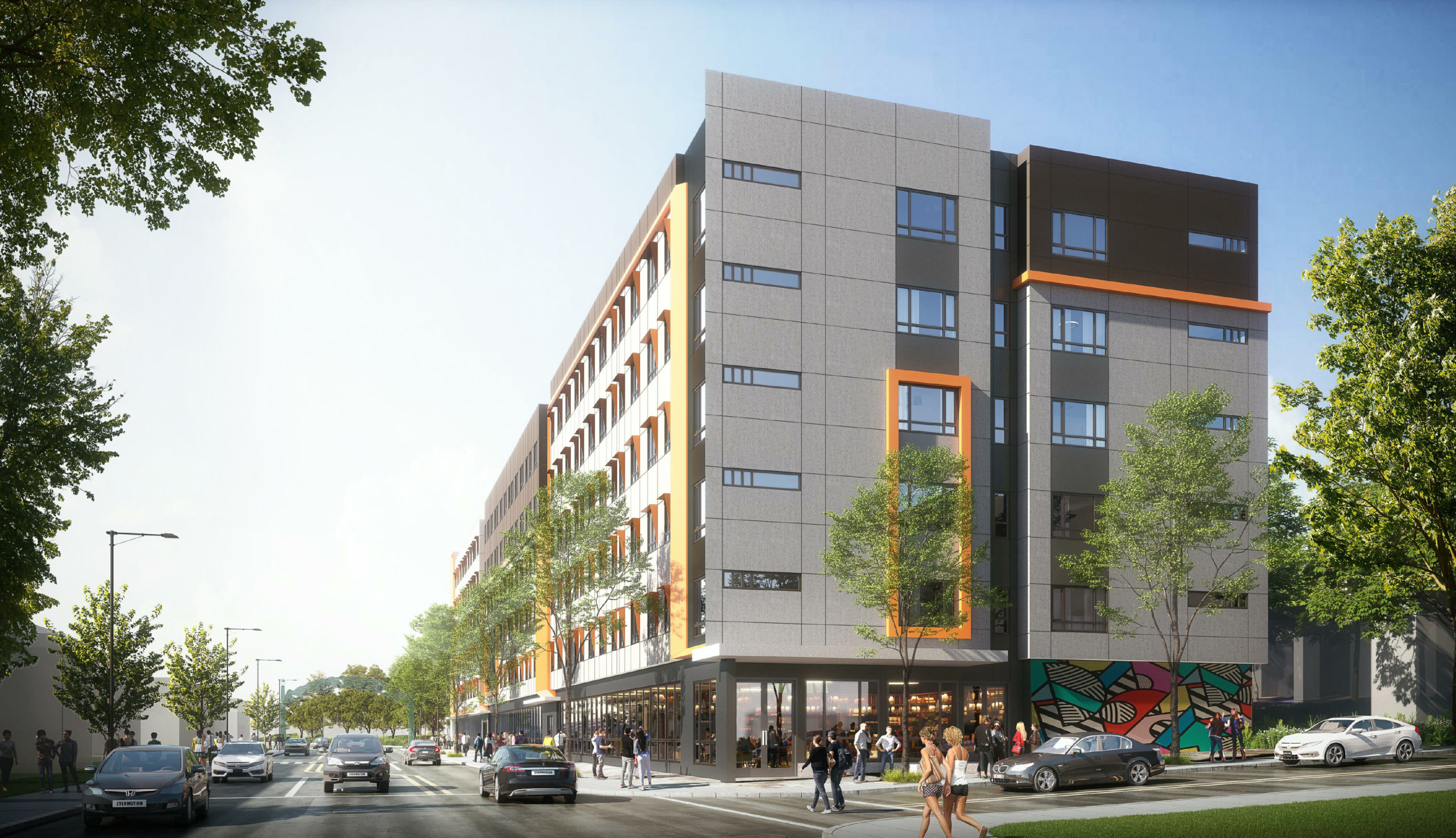 Facade materials will include cement plaster, concrete, and metal panels.

The 72-foot tall structure will yield 141,930 square feet, excluding the parking area. Of that space, 108,160 square feet will be rentable housing space and 2,950 square feet for retail. The remaining floor area will be for amenities, circulation, or mechanical functions. Parking will be included for 91 cars and 60 bicycles with some surface parking and a ground-level garage. 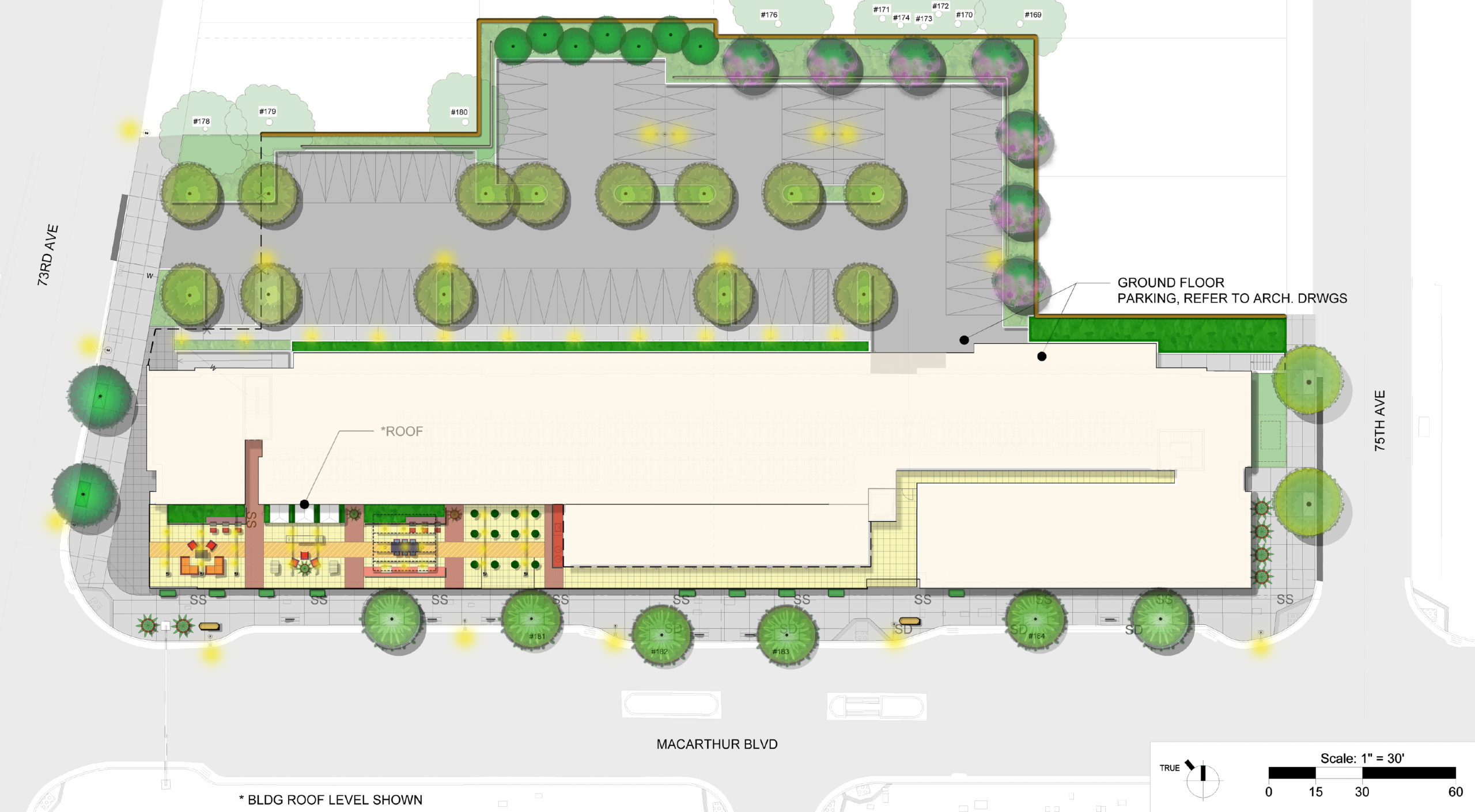 Unit sizes will vary with 15 studios, 165 one-bedroom units, and 20 two-bedroom units. Of the 20 affordable homes, two will be for low-income households earning roughly 80 percent of the Area Median Income, or AMI, and 18 will be for very-low-income households earning around 50 percent AMI. According to the density bonus application, “all 20 affordable units will house special needs individuals…”

Residential amenities will include the community room, fitness center, and a roof deck with views of the Caballo Hills.

The six-story building will cover less than half of the 1.27-acre parcel. Landscaping will cover around 0.2 acres, with design by the Guzzardo Partnership. KPFF is the civil engineer.

An estimated construction cost and timeline have not been established.