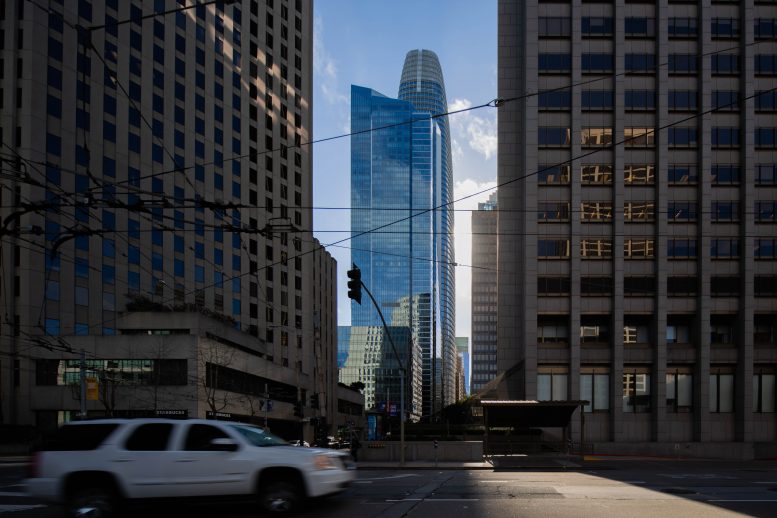 Millennium Tower from Main Street and Mission Street, with the 11-story addition visible infront of the 58-story tower, 77 Beale is on the right of the image, image by Andrew Campbell Nelson

The eighth tallest skyscraper in the Bay Area planned or built is the Millennium Tower, a 645-foot tall residential building at 301 Mission Street in SoMa, San Francisco. Developed by Millennium Partners, the project was built between 2005 and 2009 opened as the tallest residential tower west of Chicago. Since 2016, the building has garnered international news for both tilting and sinking. 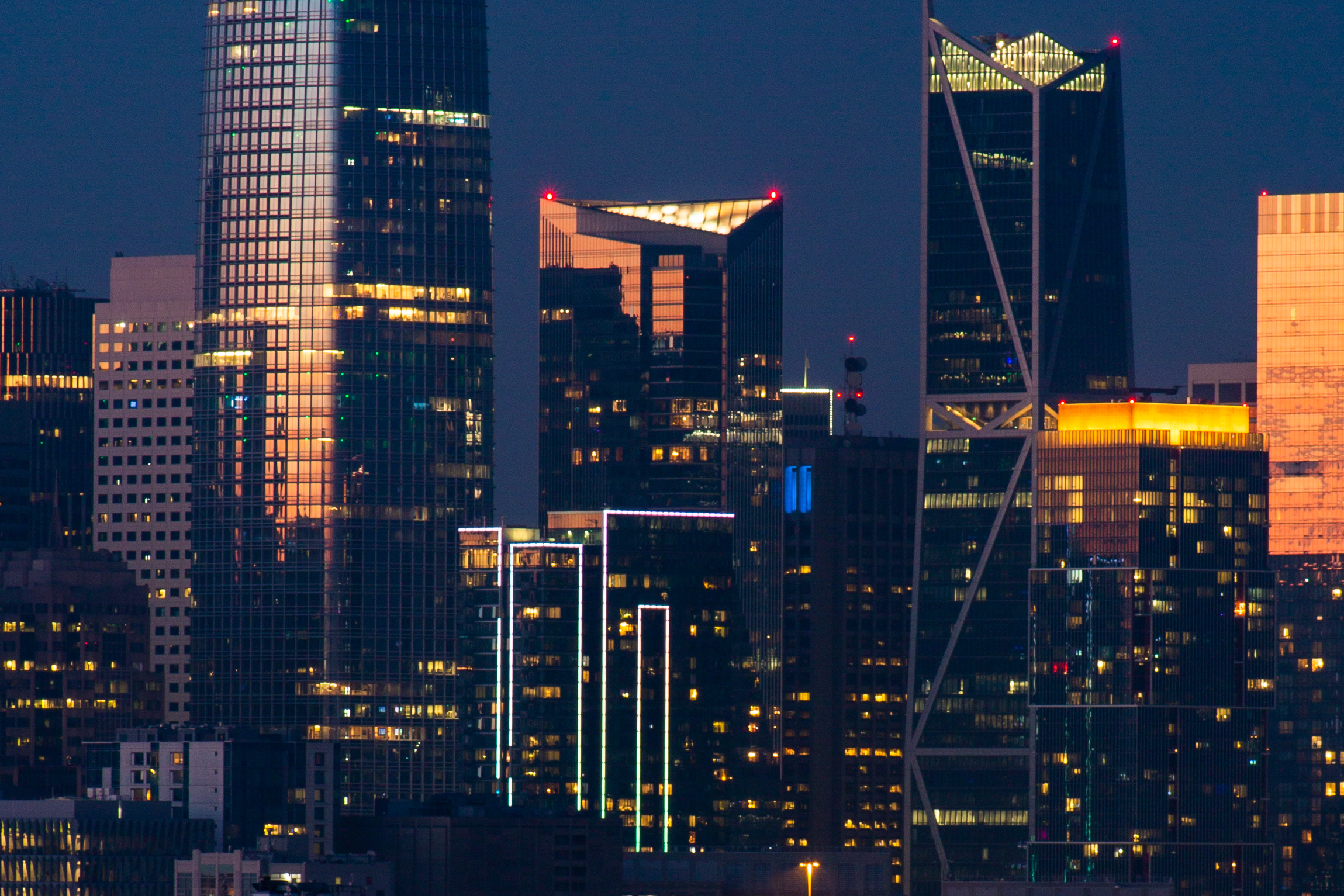 Millennium Tower at sunset between the Salesforce Tower and 181 Fremont Street, image by Andrew Campbell Nelson

The Millennium Tower is currently the sixth tallest skyscraper in the San Francisco skyline.

The property was completed in April of 2009 at an estimated cost of $600 million. By 2013, the project was fully sold, making three-quarters of a billion dollars. The $13 million penthouse sale in 2016 was the most expensive condominium sale in San Francisco since 2011. In 2011, the St. Regis penthouse sold for $28 million. Millennium Tower’s penthouse spans 5,500 square feet with two bedrooms and panoramic views of the city. 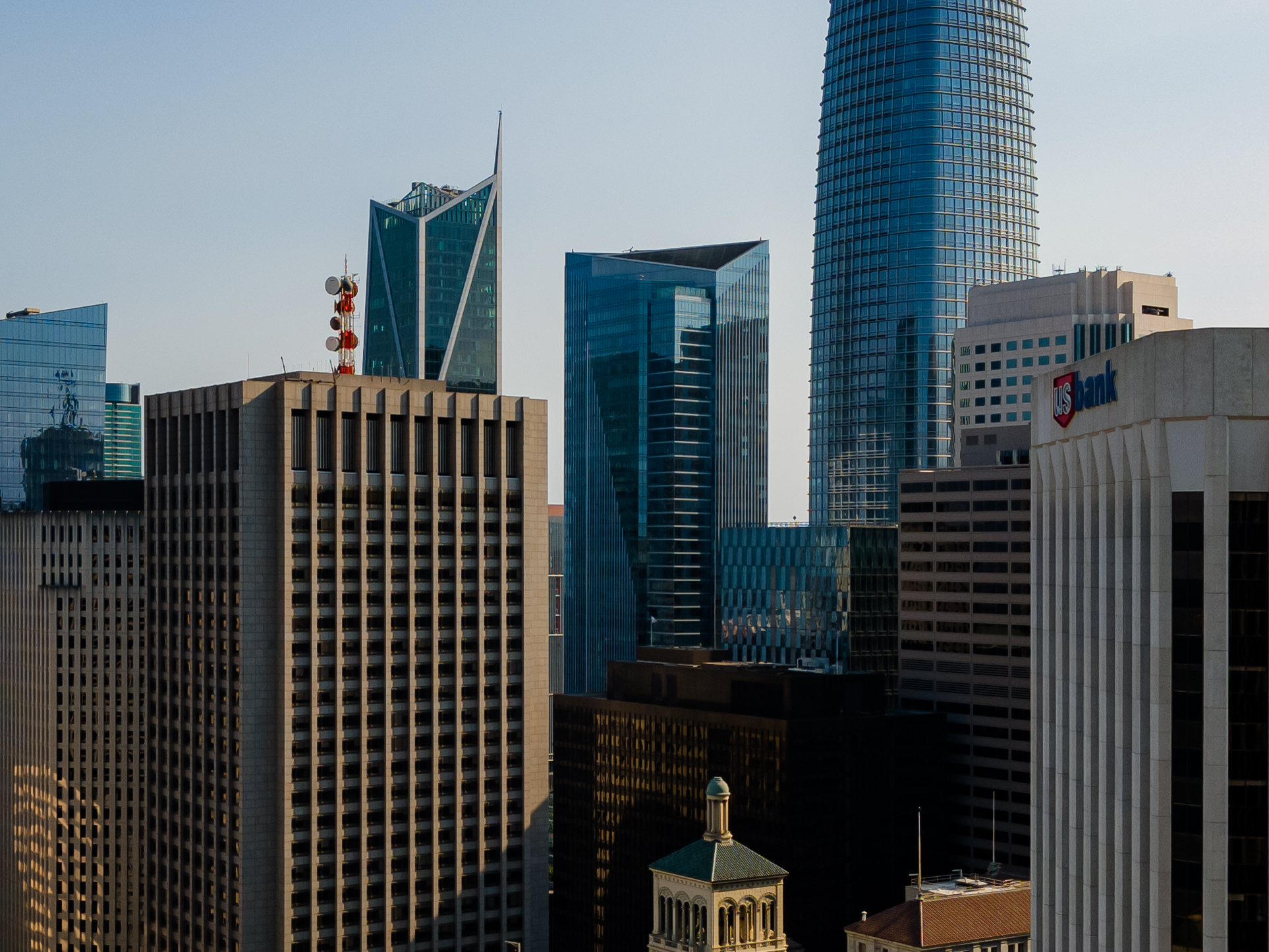 The 58-story skyscraper contains 1.15 million square feet with 21,500 square feet of on-site amenities, 8,000 square feet of ground-floor retail, and a five-floor parking garage with a capacity for 340 vehicles. The development includes the central tower, a shorter 125-foot tall building, and the two-story glass atrium. A total of 419 residences are on-site, with 53 in the smaller tower. 12 elevator lifts service the property. 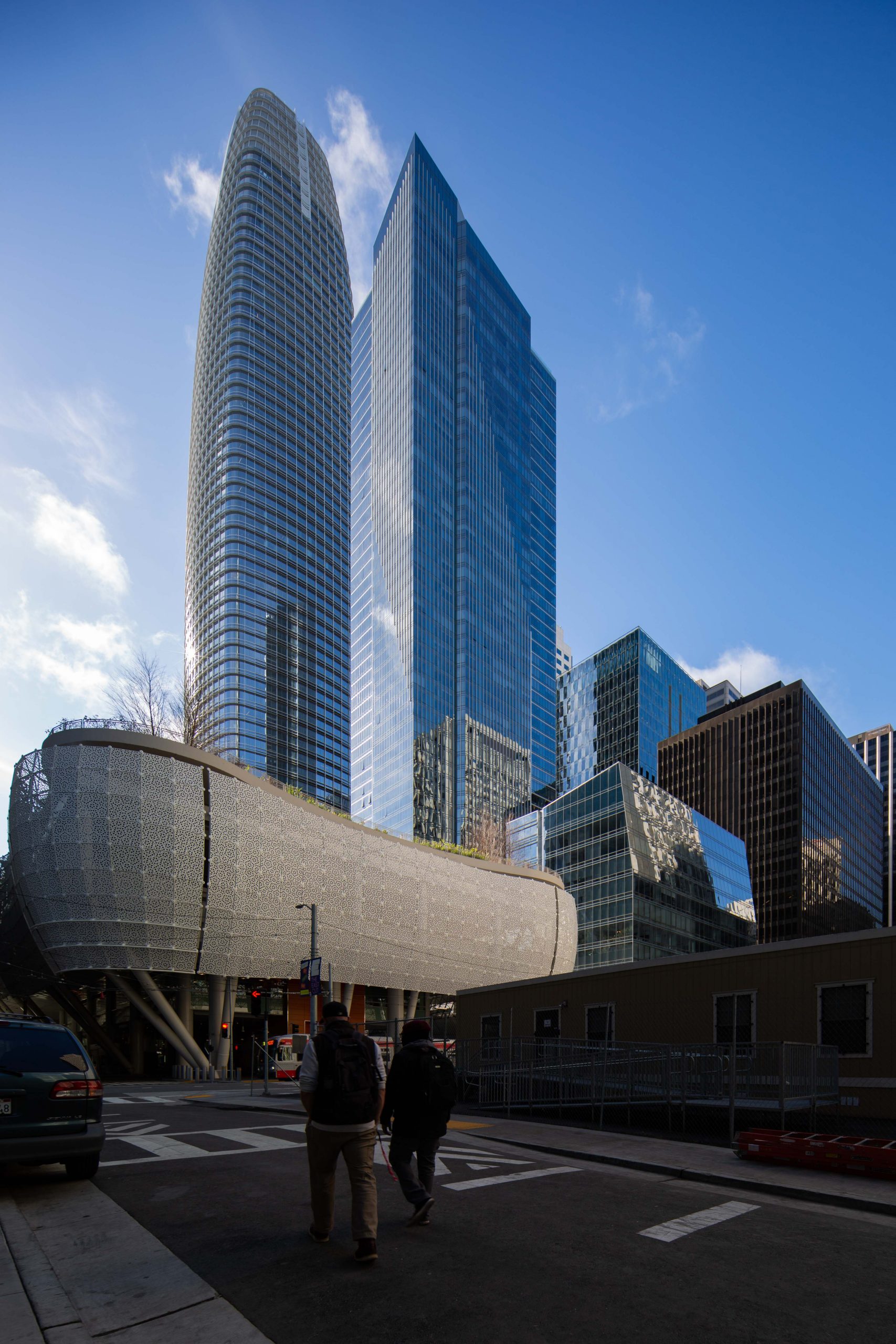 Millennium Tower as seen from across Beale Street, image by Andrew Campbell Nelson

Handel Architects is responsible for the architectural design. The project is a crystalline modernist design wrapped with curtainwall glass accented by vertical metal fins and a metal panel-clad base. The project emphasizes its slim proportions, elevating the city’s skyline with a humble design.

Webcor Builders was the project’s main contractor, and DeSimone Consulting Engineers was the structural engineer. 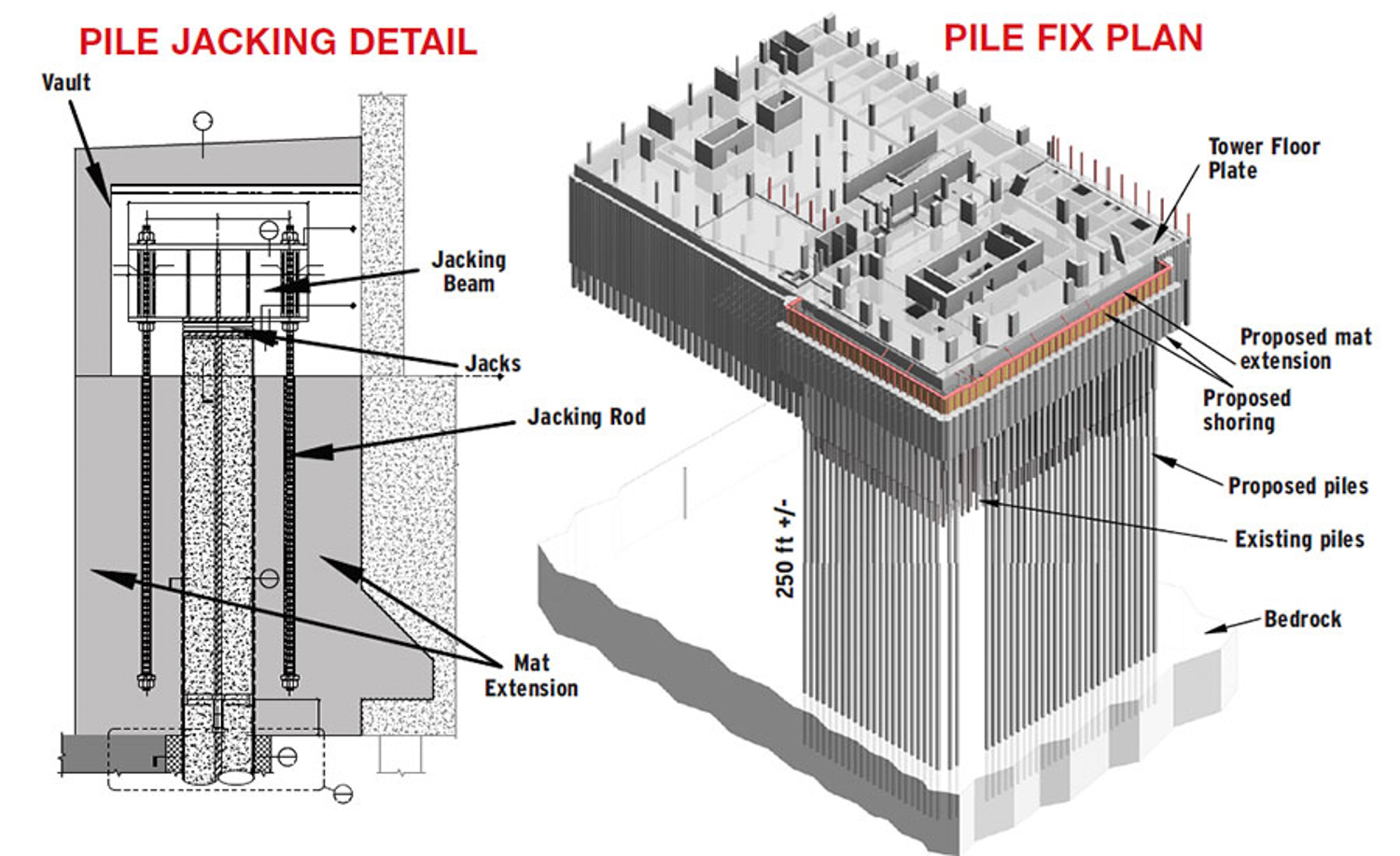 Unfortunately, Millennium Tower’s leaning has increased anxiety about the future of high-rise construction in San Francisco among the general public. The situation was sited by those opening the recently-rejected development at 469 Stevenson Street. 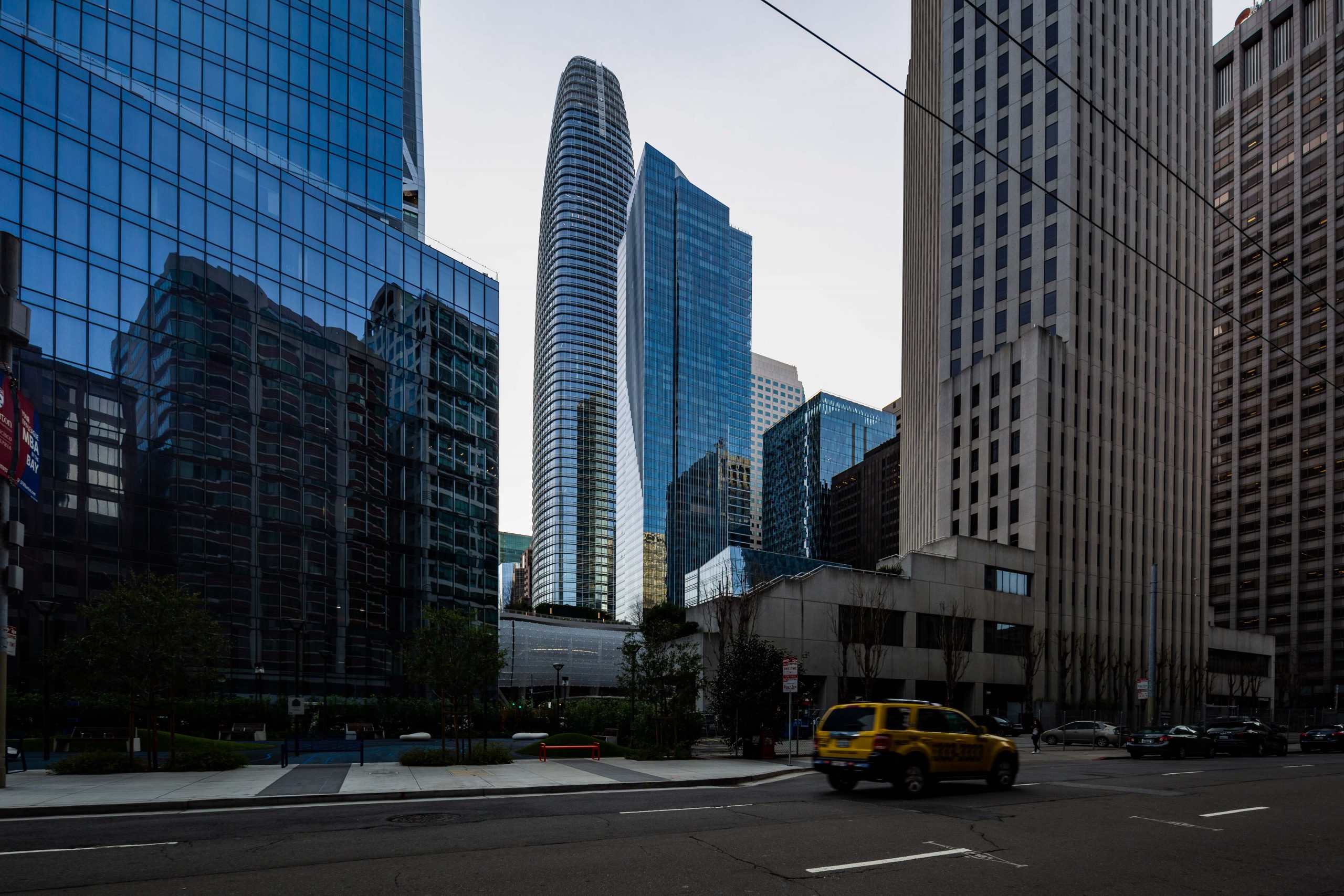 The project has continued to sink while crews work on a $100 million fix, adding 52 piles extending roughly 270 feet down to bedrock. Once complete, engineers hope the new piles will stop future leaning, and even correct the project’s current tilt. Work stopped just before Labor Day after new leaning had been measured. As of late October, crews have resumed the additional foundation work.

Legal battles remain between residents and the developer. An exact reason for the tilting has not been established. Developers have blamed eroding soil from the construction of the nearby Transbay transit center as the reason Millennium Tower’s foundation has been disturbed.