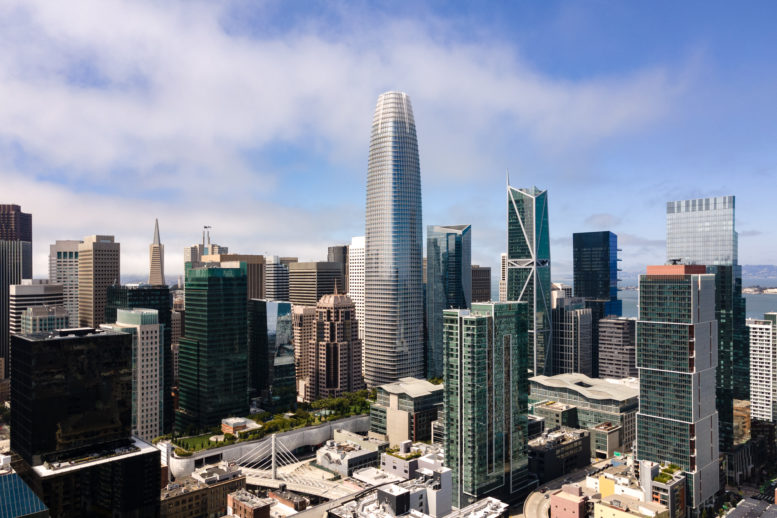 Rising 1,070 feet tall, the Salesforce Tower is the tallest building in the Bay Area, the 17th tallest in the United States, and the 91st tallest in the world. The distinctive glass-wrapped tower has been designed by one of the preeminent architects in the world, Pelli Clarke Pelli. Unsurprisingly, it remains a divisive contribution to the San Francisco skyline.

The tower is located at 415 Mission Street in SoMa, between First Street, Fremont Street, and Howard Street. 415 Mission is part of the San Francisco Transbay development, including the Transbay Transit Center and the 5.4-acre Salesforce Park roof garden. 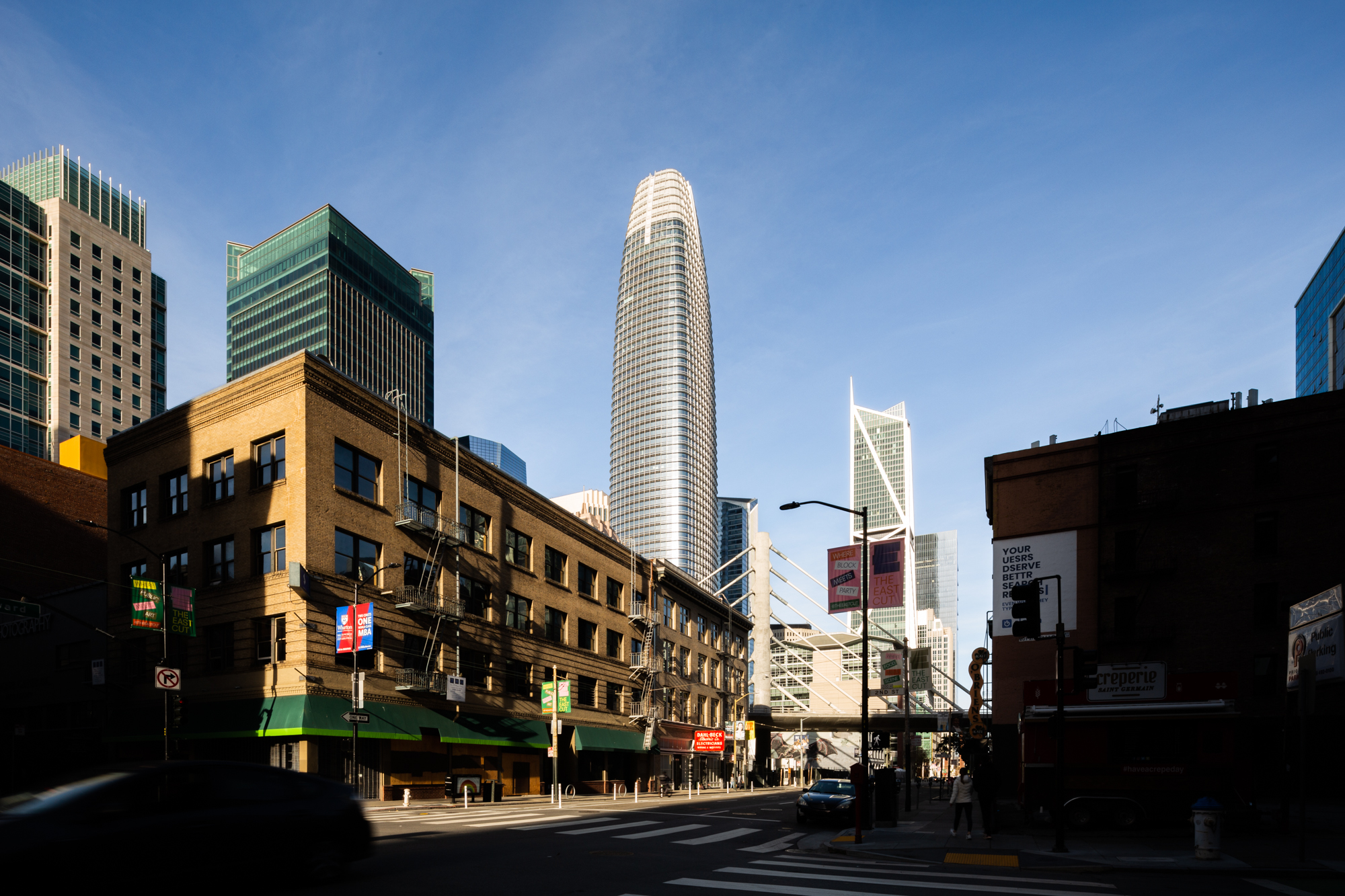 Today’s story is the last addition for our weekly series on SFYIMBY to count down the 52 tallest towers in the Bay Area built or planned as of January 2021.

The existence of the Salesforce Tower is only possible because of the Transit Center District Plan, imagined by the San Francisco Redevelopment Agency, the San Francisco Planning Department, and Skidmore Owings & Merrill. The planning spanned 40 acres and a dozen city blocks, with the promise to establish a thriving extension of the city’s urban environment. 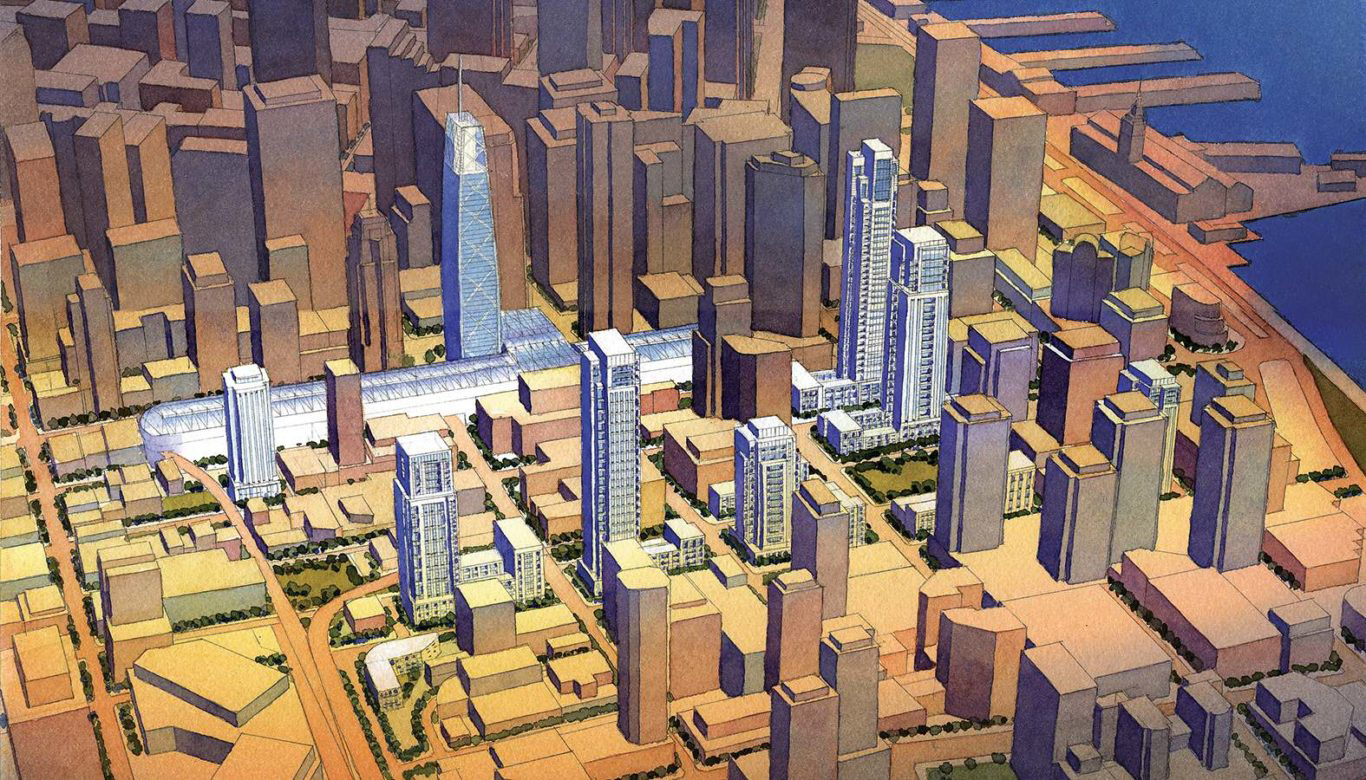 The following is an excerpt published by SOM, describing the process of working on the Transbay Design for Development plan:

Informed by public planning processes, the Design for Development plan established frameworks for land use, circulation and parking, streetscapes and open space, and vertical development. It has served to provide consistency in urban design while allowing for architectural creativity, balance density with access to sunlight and open space, incorporate significant pedestrian-friendly public improvements, and activate ground-floor space.

It has also required that 35 percent of the new residences built be affordable housing. Development controls and design guidelines were created to support the community’s vision of Transbay as a distinctly livable, economically diverse, and environmentally sustainable urban neighborhood. 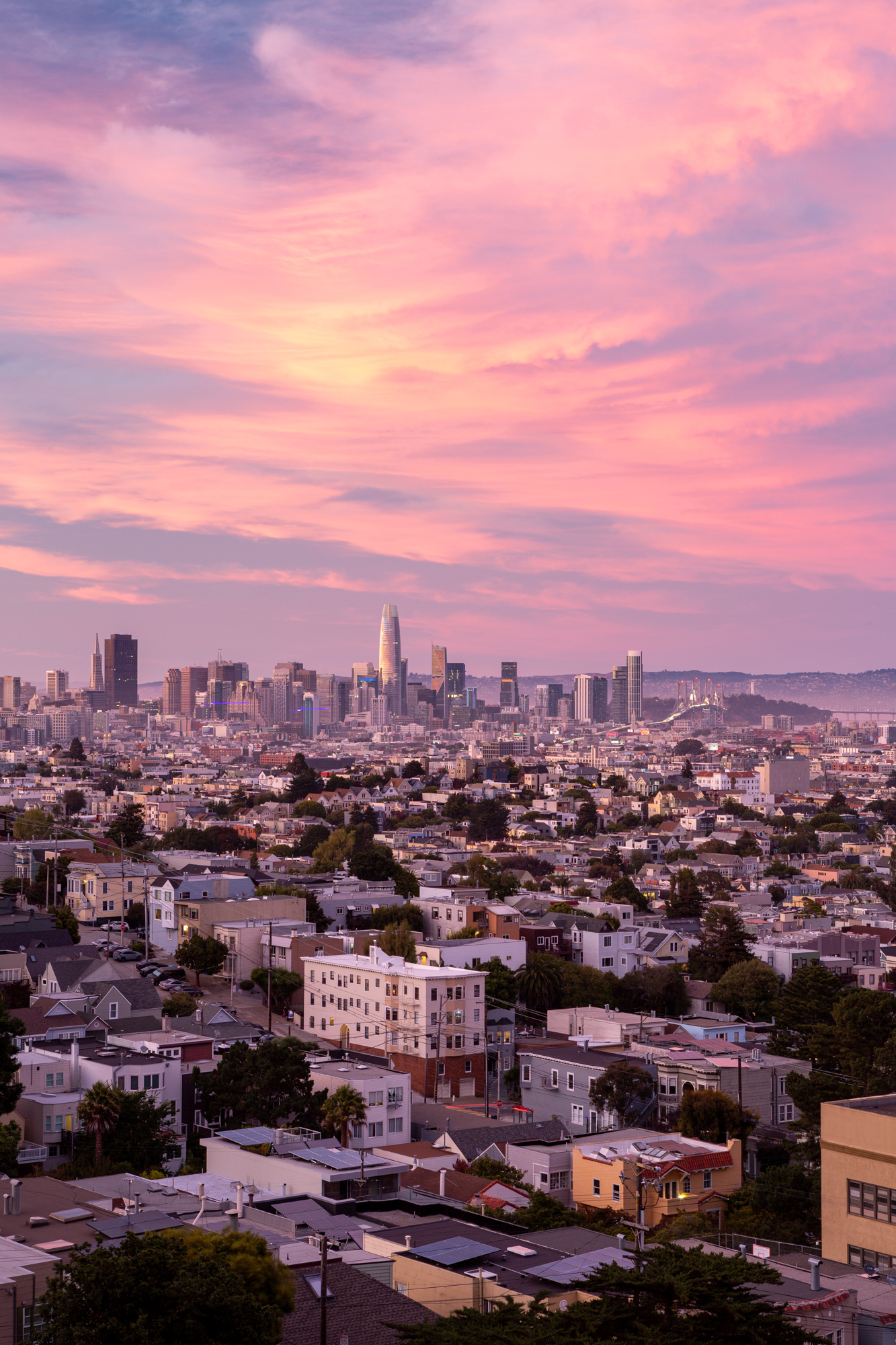 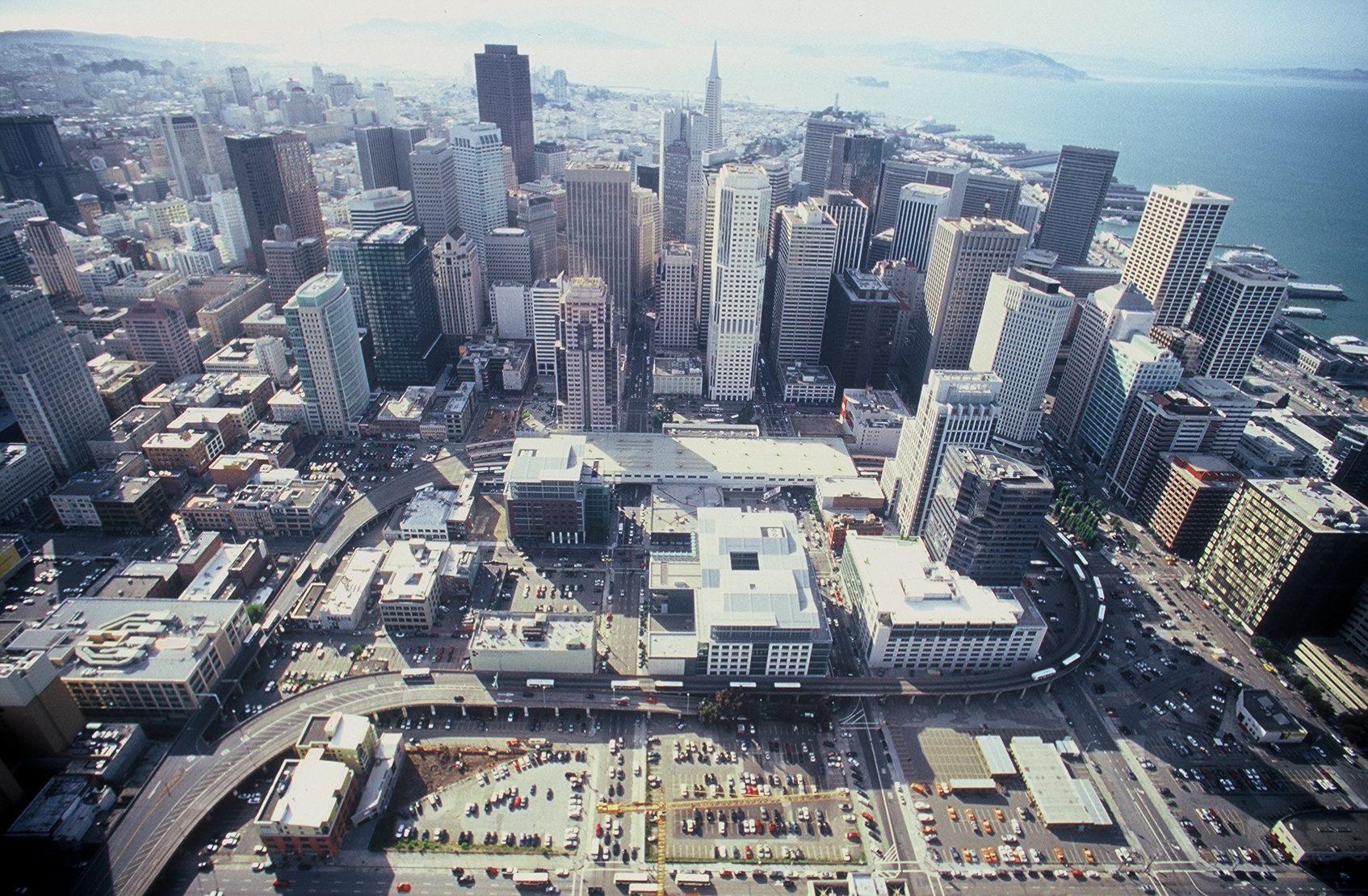 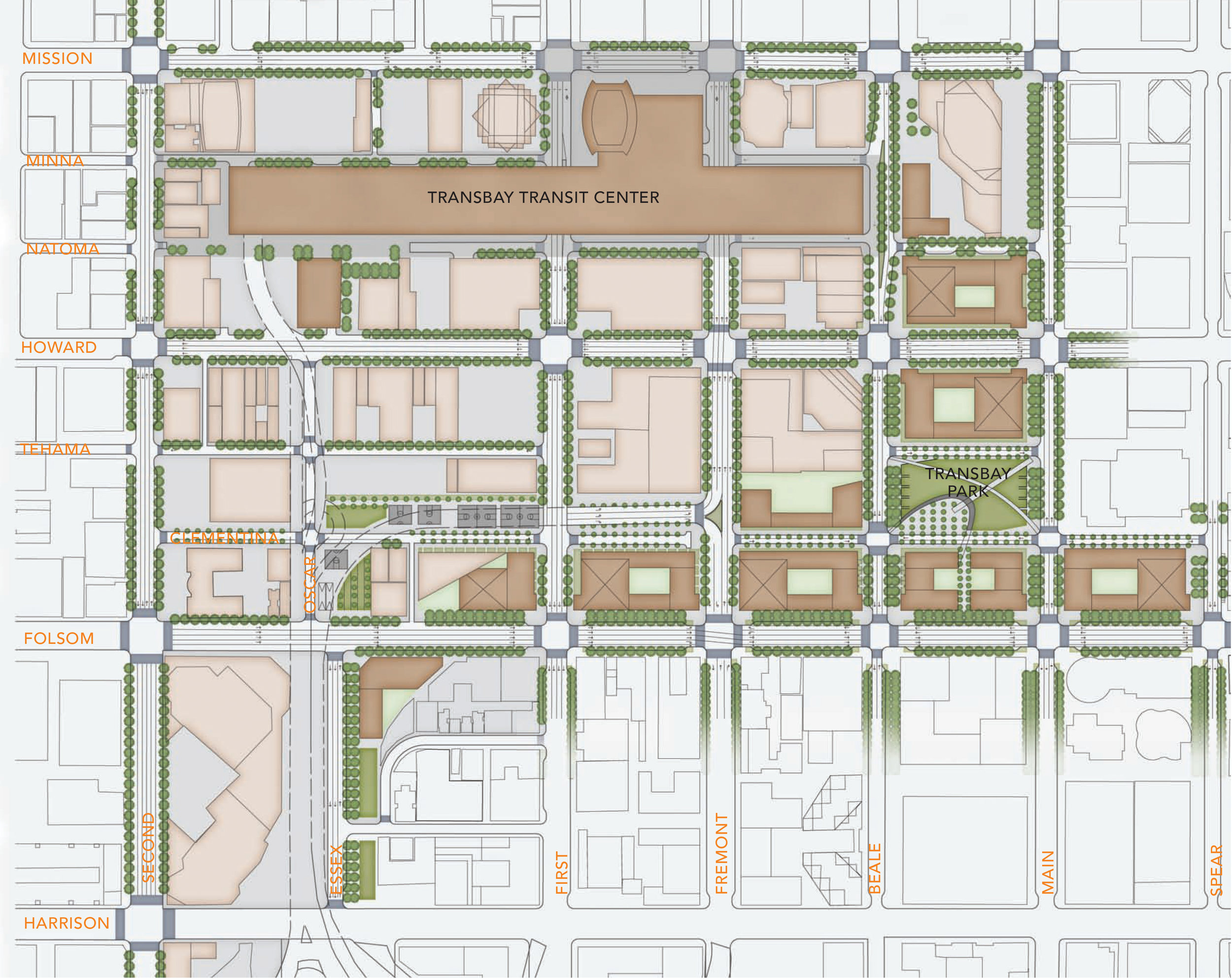 The former Transbay Terminal was built in 1939, connecting commuters across the Bay Bridge to Oakland and the East Bay by Train. In 1958, the Bay Bridge trains were removed, and the terminal was adapted to service buses. It would not be until 1974 that trains would start moving again across the bay with the opening of BART and the Transbay Tube. However, the underground stations were built for BART, bypassing the former terminal.

Plans to revitalize the downtown area started in the early 2000s. Project master planning began around 2003 or 2004. The plan approved in 2009 zoned to build over nine million square feet with over six million square feet of offices, over four thousand apartments, over a thousand hotel rooms, and 85,000 square feet for retail. 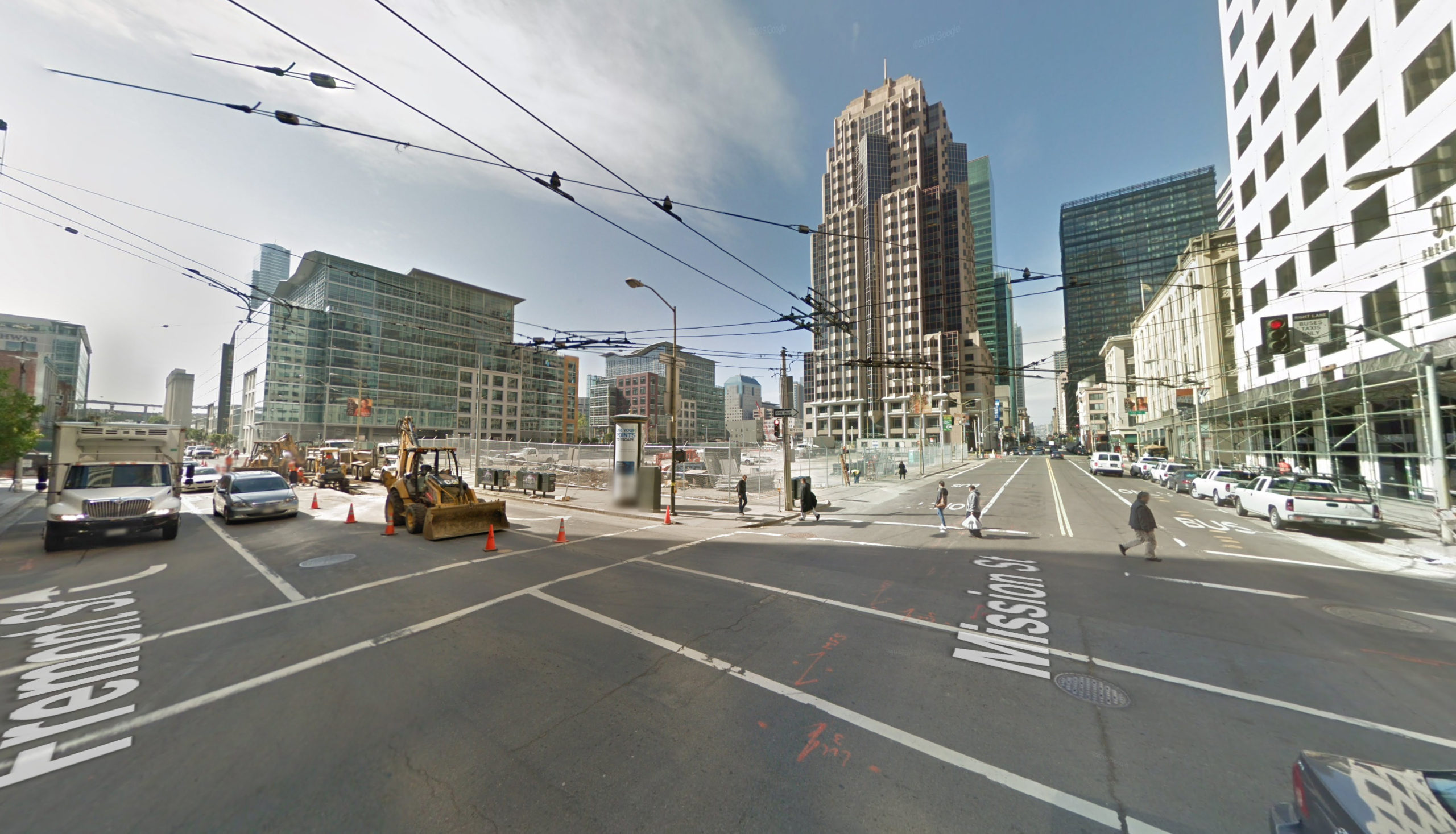 The former Transbay Terminal was demolished in 2011, along with elevated freeways running across Fremont, Beale, and Howard Street and into the former transit center. Construction started on the Salesforce Tower with groundbreaking in March of 2013. The structure topped out in 2017 and opened by 2018.

The development is estimated to have cost $1.1 billion. Boston Properties and Hines were joint developers for the tower. Magnusson Klemencic Associates was the structural engineer, WSP was the MEP engineer, and Hathaway Dinwiddie was the main contractor responsible for putting the building together. Kendall Heaton Associates is the architect of record. 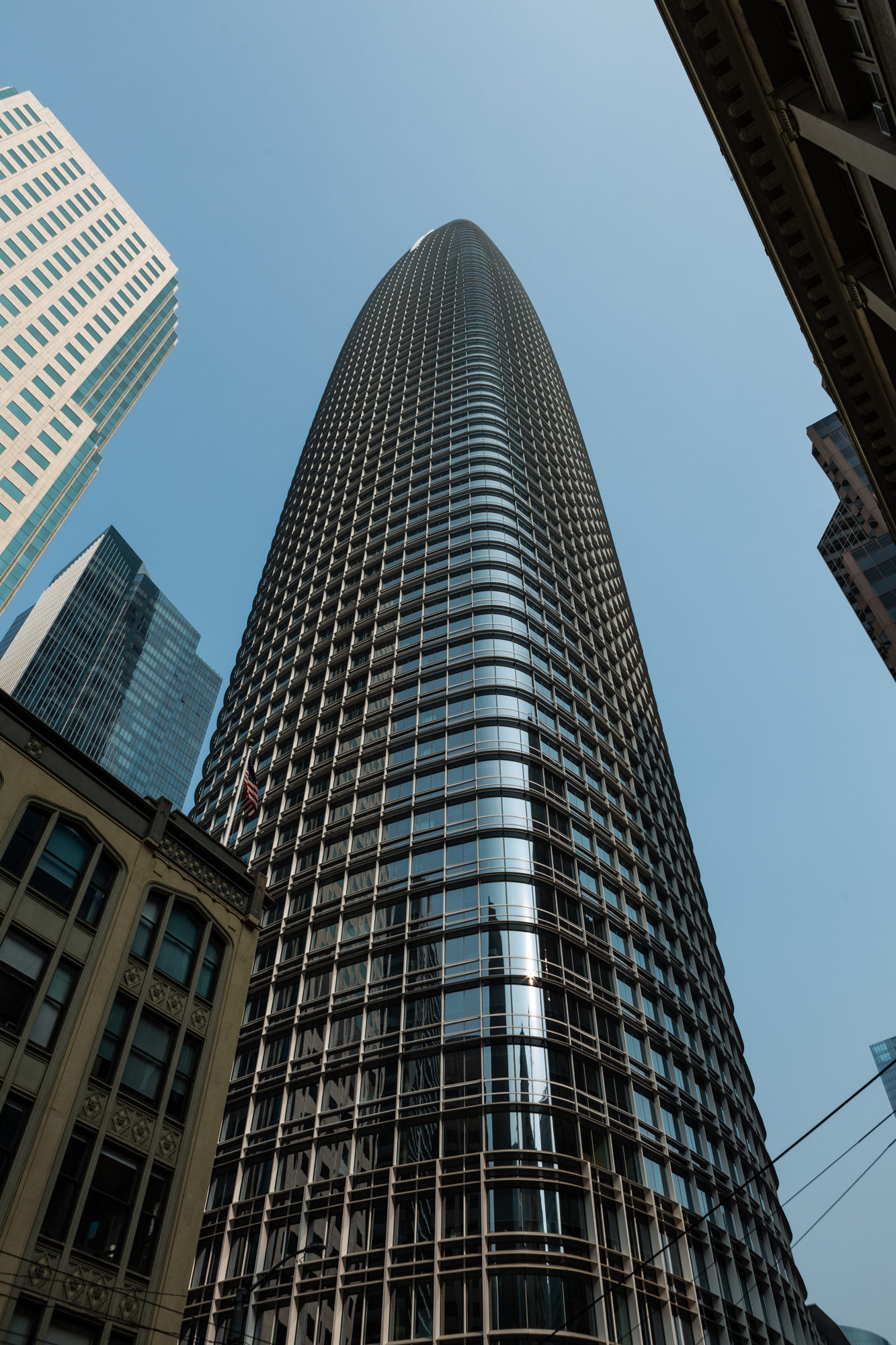 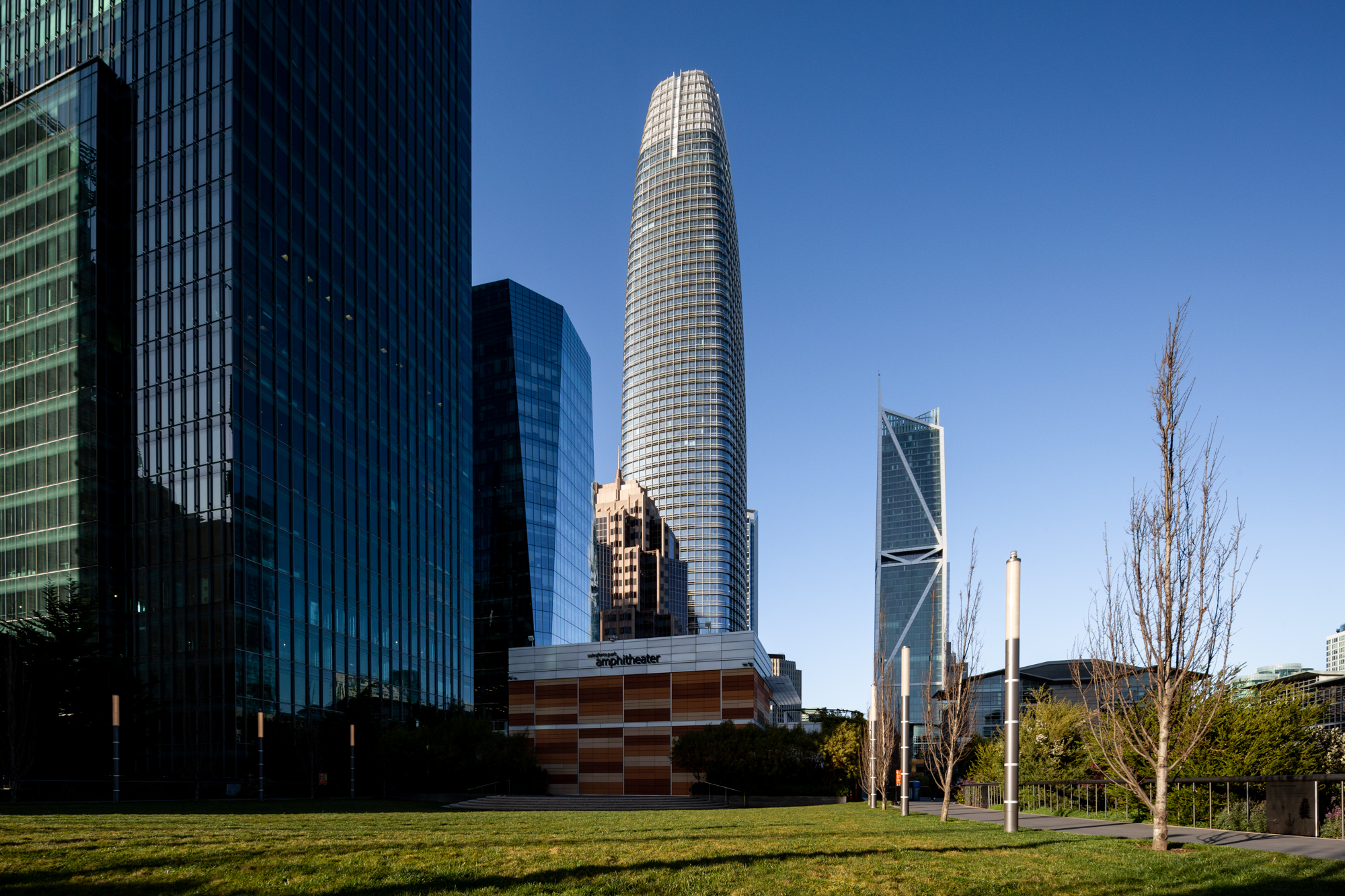 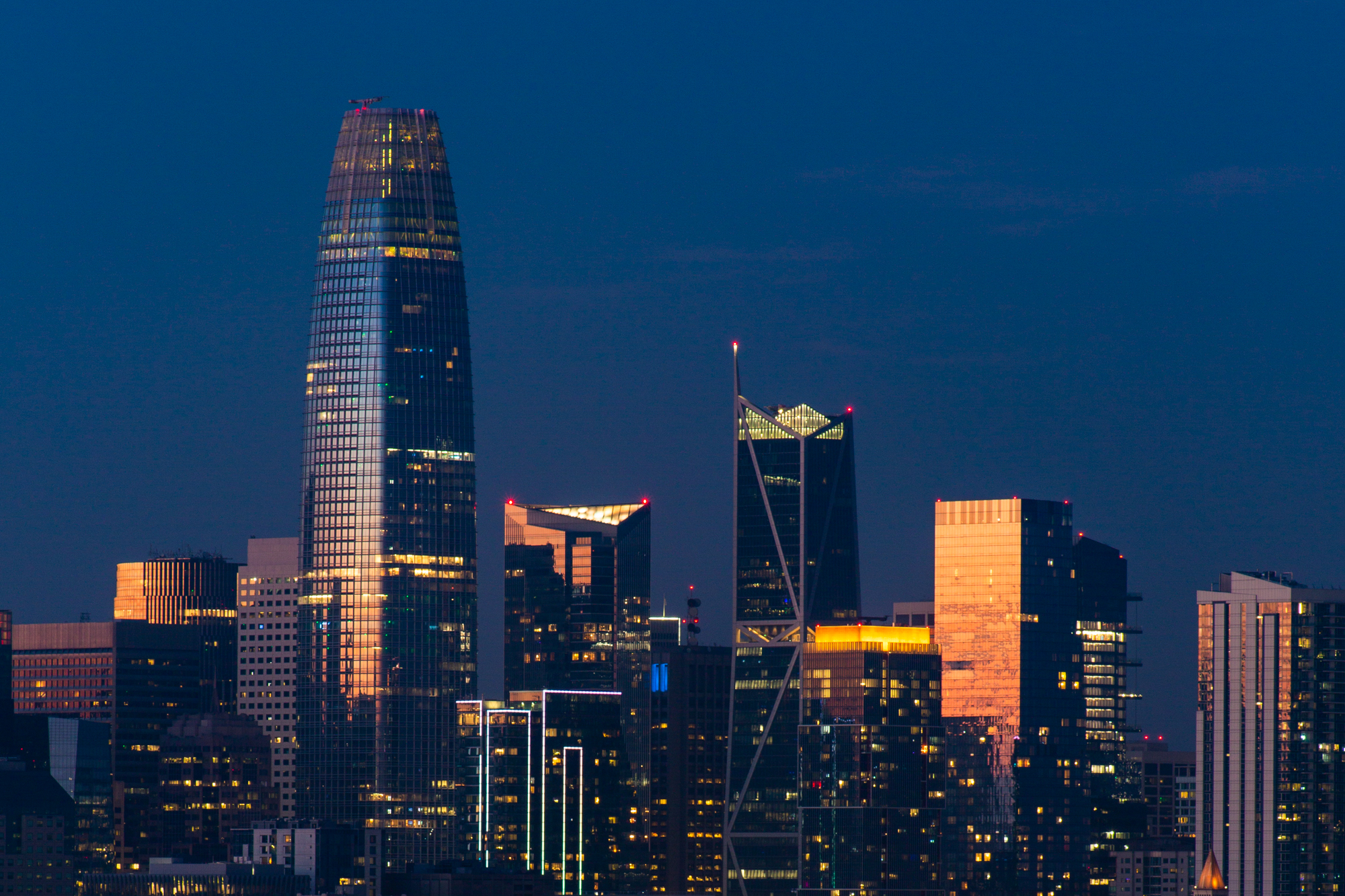 Salesforce Tower next to 181 Fremont, image by Andrew Campbell Nelson 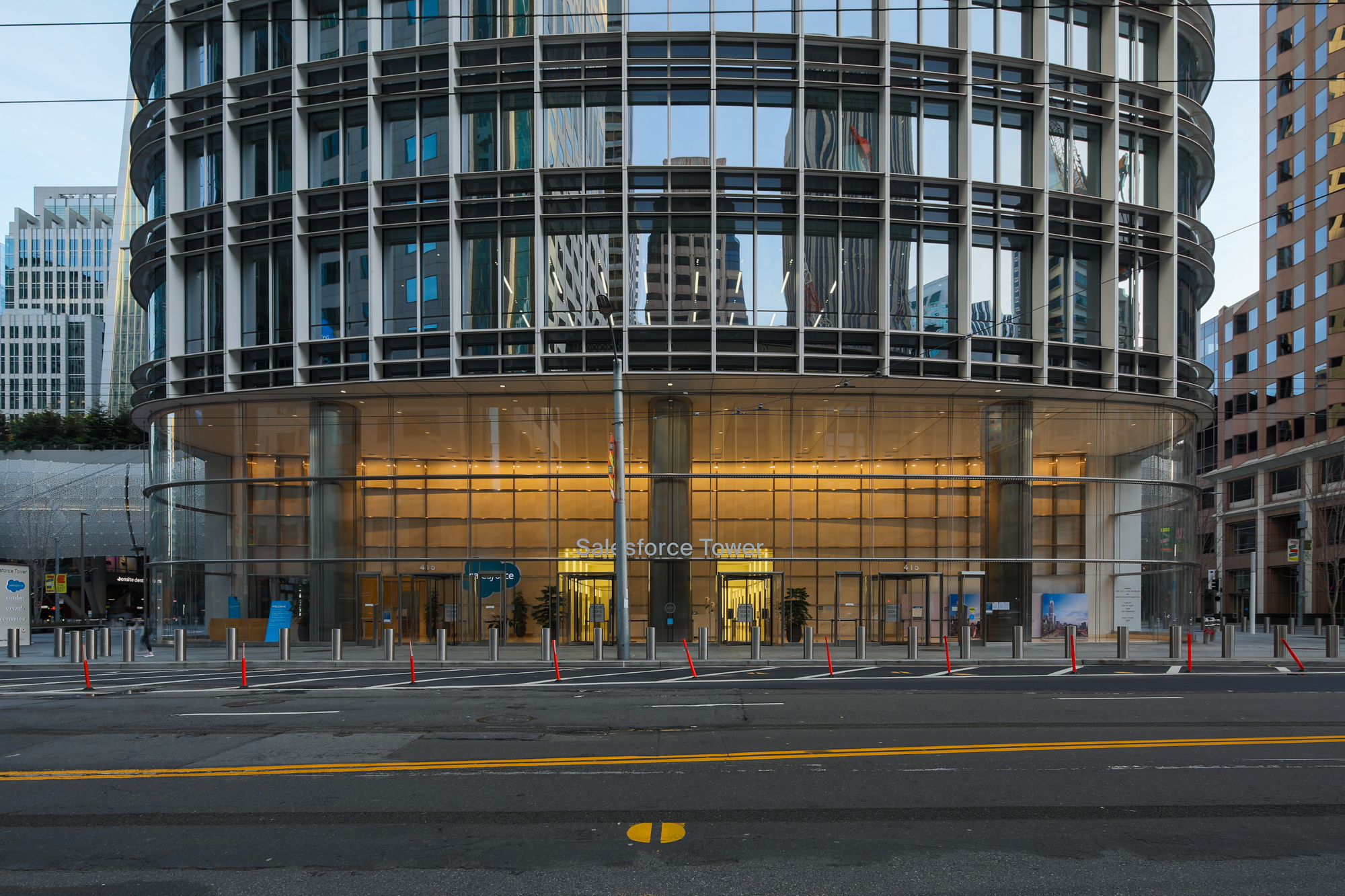 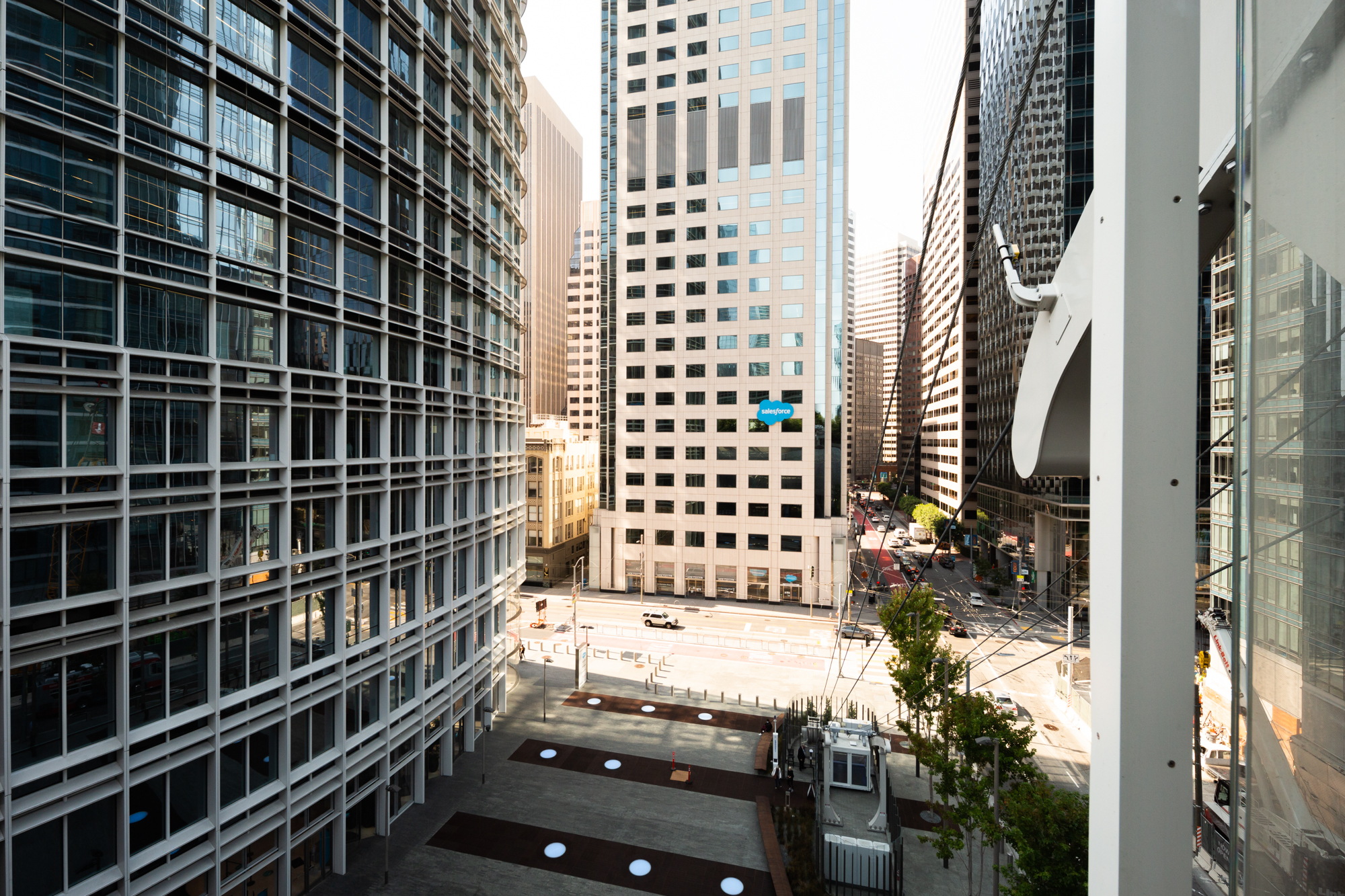 Salesforce Tower base seen from the Salesforce Park, image by Andrew Campbell Nelson

The Salesforce Tower opened as the tallest skyscraper in the United States west of the Mississippi River. The title was not held long, as the Wilshire Grand Center in Los Angeles took over the mantle the same year, rising 1,100 feet tall. 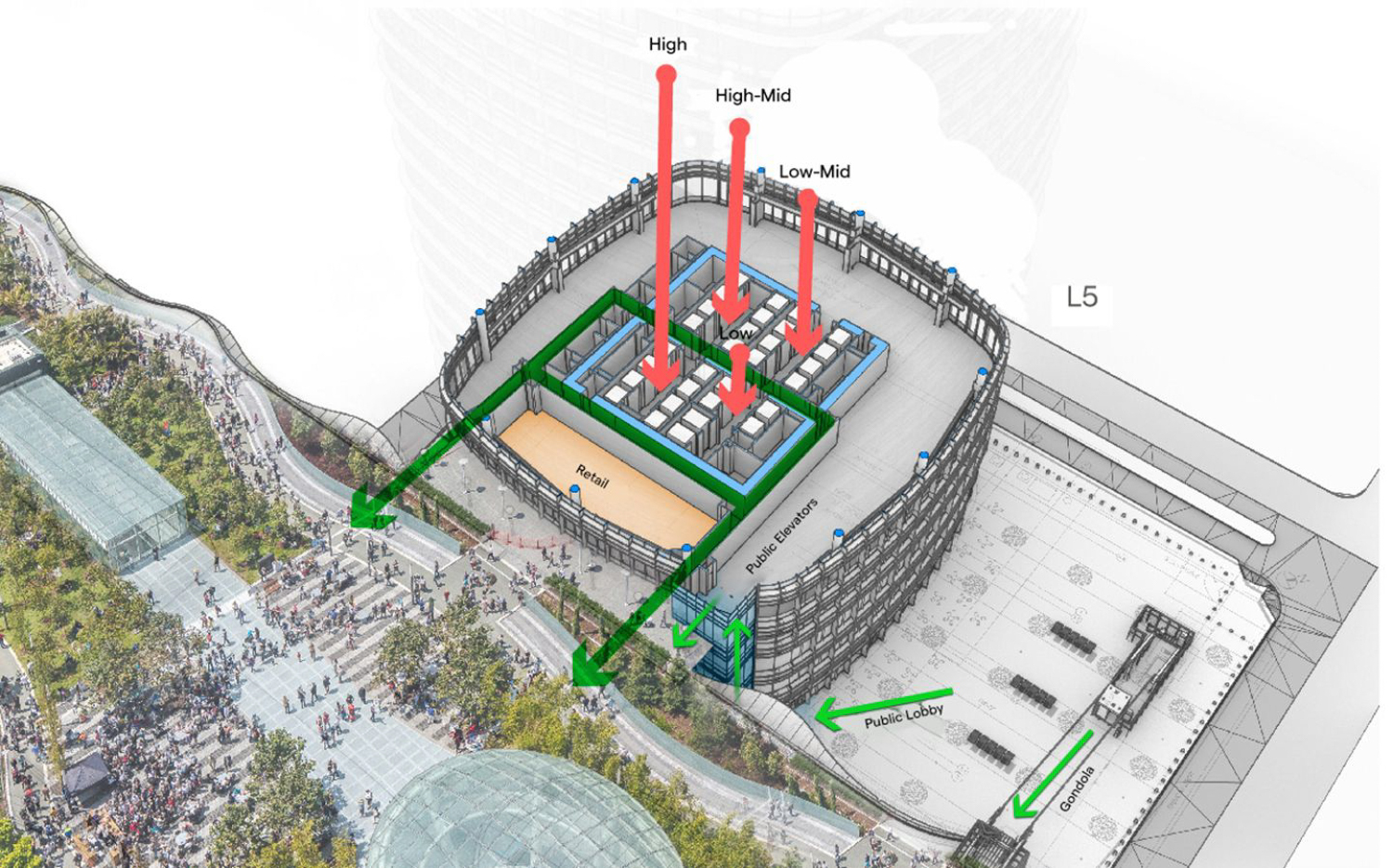 The Salesforce Tower sits on a 14-foot thick concrete slab made with nearly 49 million pounds of material, all poured within 18 hours on the same day. Spouting all the concrete for the foundation has become one of the biggest, longest concrete pours in construction history. The slab holds the building in place, with the foundation strengthened by 42 piles extending 318 feet deep into bedrock. 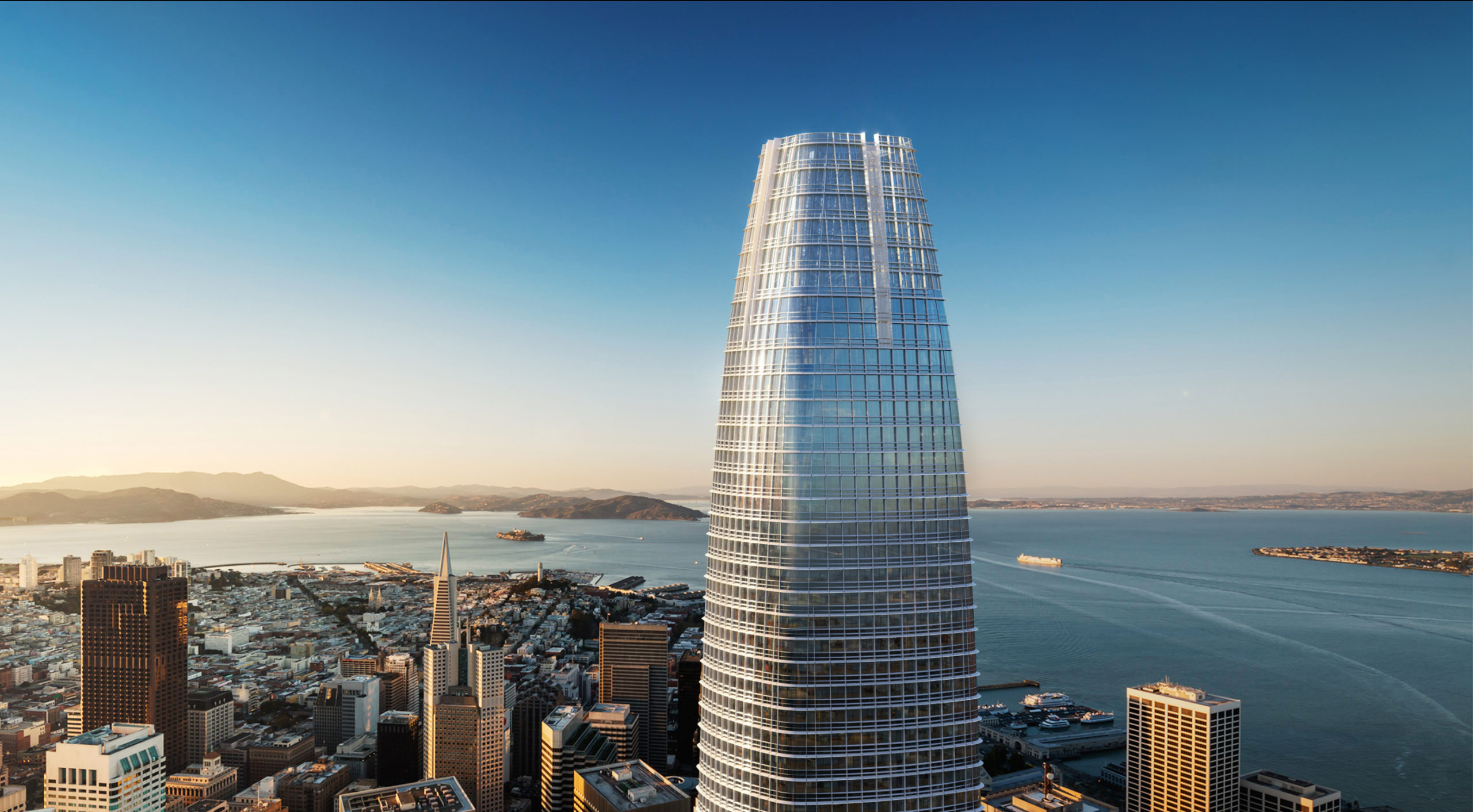 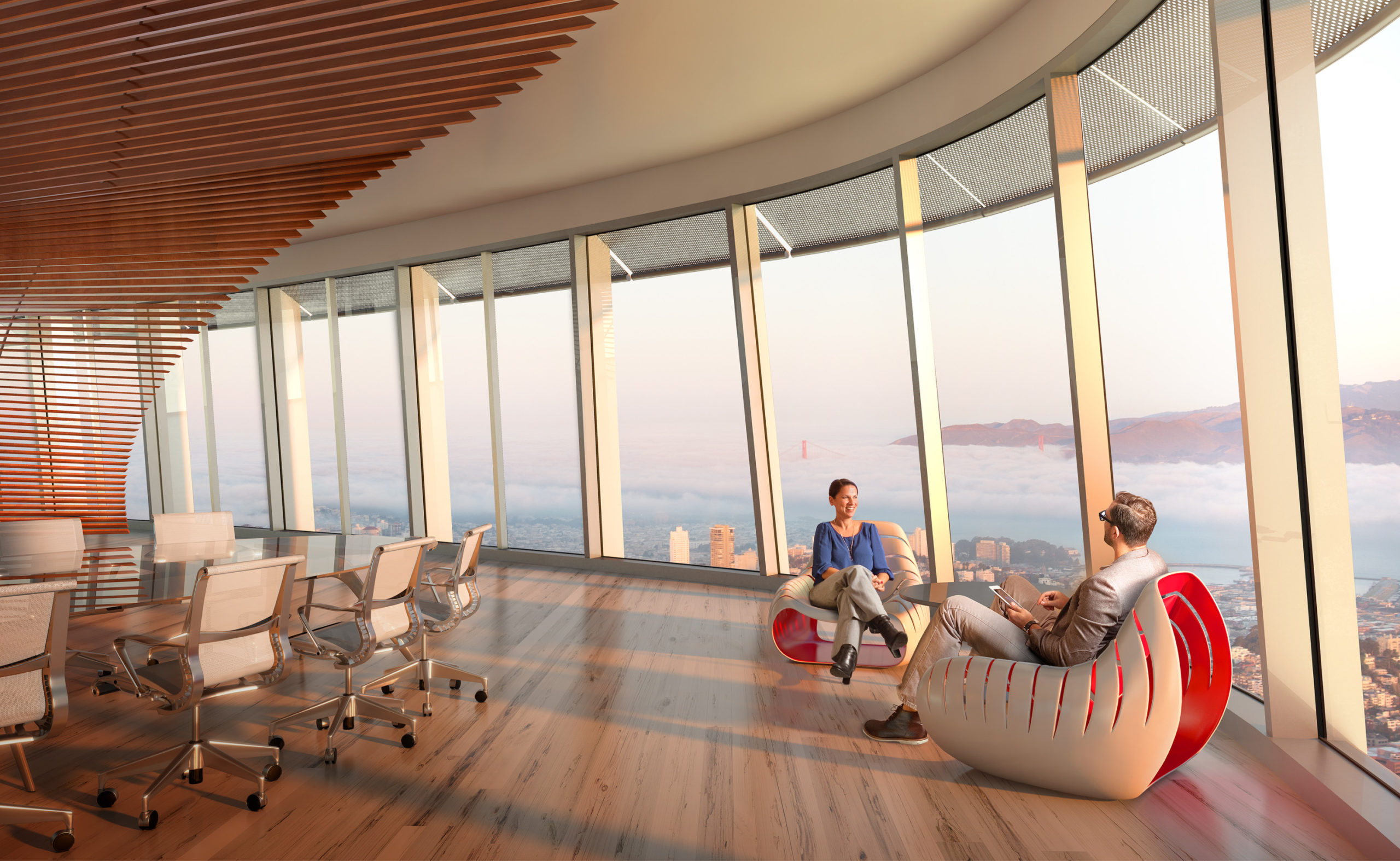 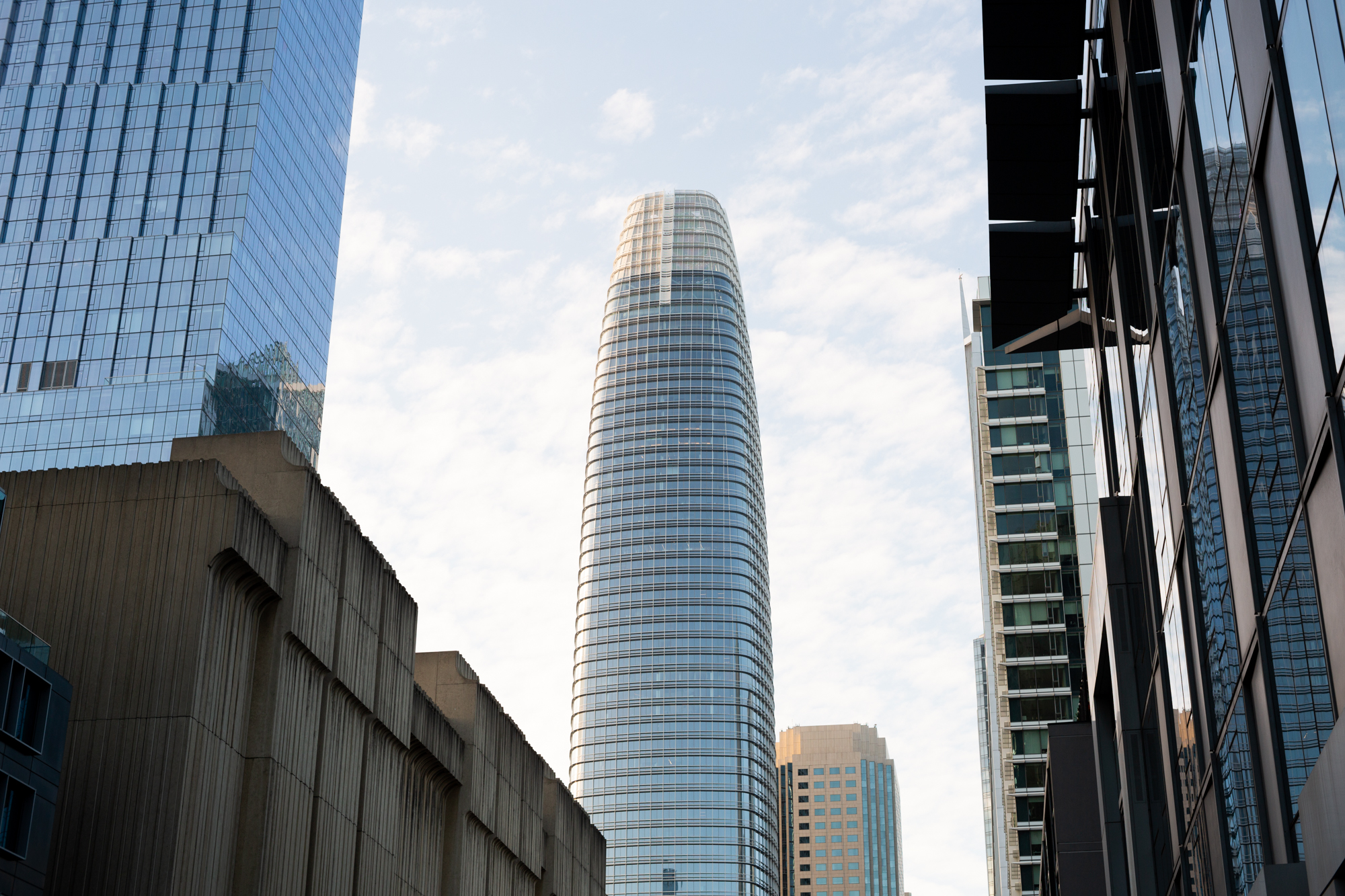 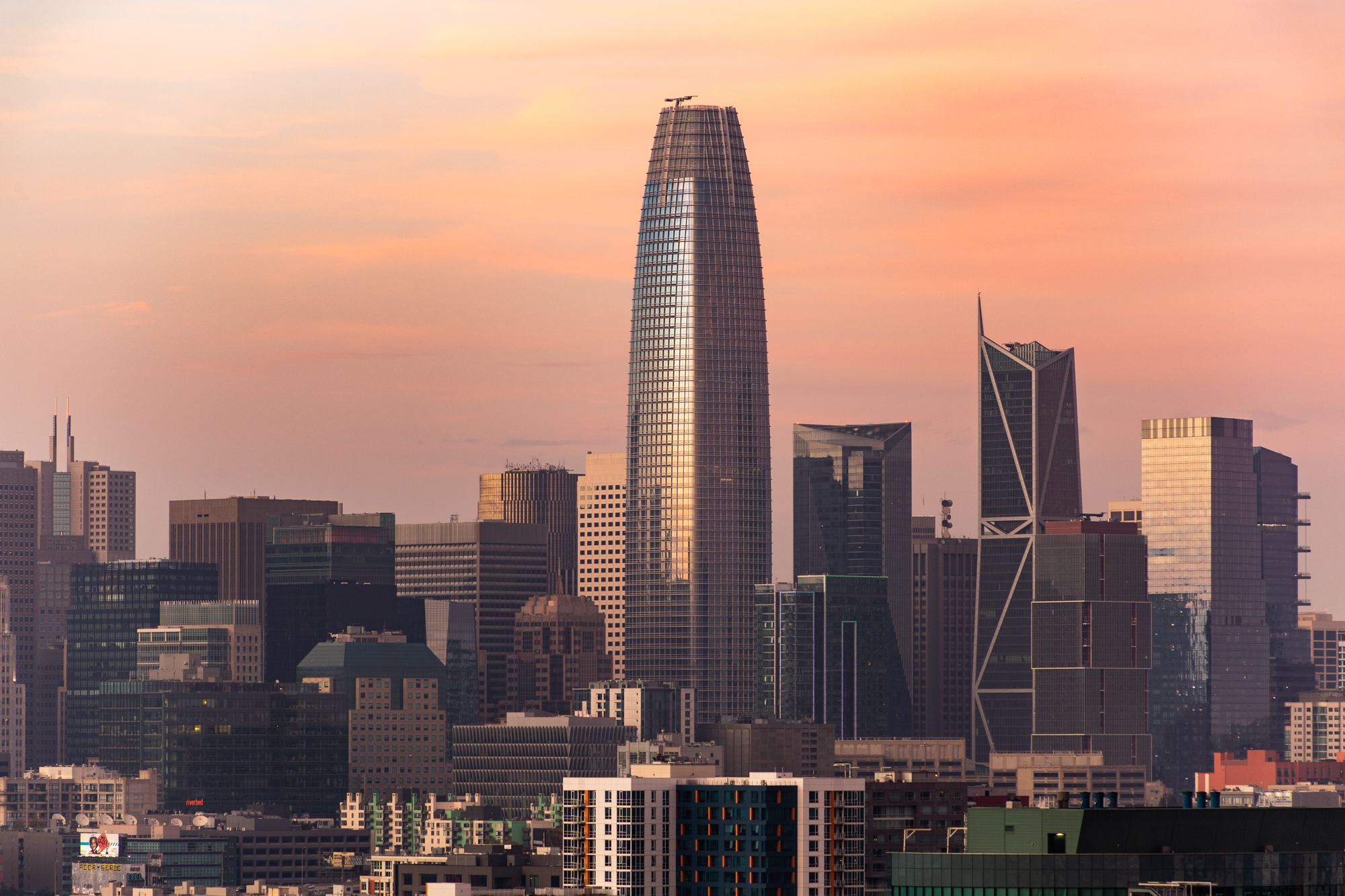 Salesforce Tower at sunset in December of 2020, image by Andrew Campbell Nelson

A lot can be said about the design by Pelli Clarke Pelli. The Salesforce tower was one of the last designed by the firm’s namesake architect, Cesar Pelli. Though many mock the structure for its suggestive shape, it contributes to a wider history of architecture. 415 Mission reflects the Argentine-American Architect’s forays with modernism, postmodernism, and the influence of an unbuilt proposal by Eliel Saarinen in 1922 for the design competition of the Tribune Tower in Chicago. 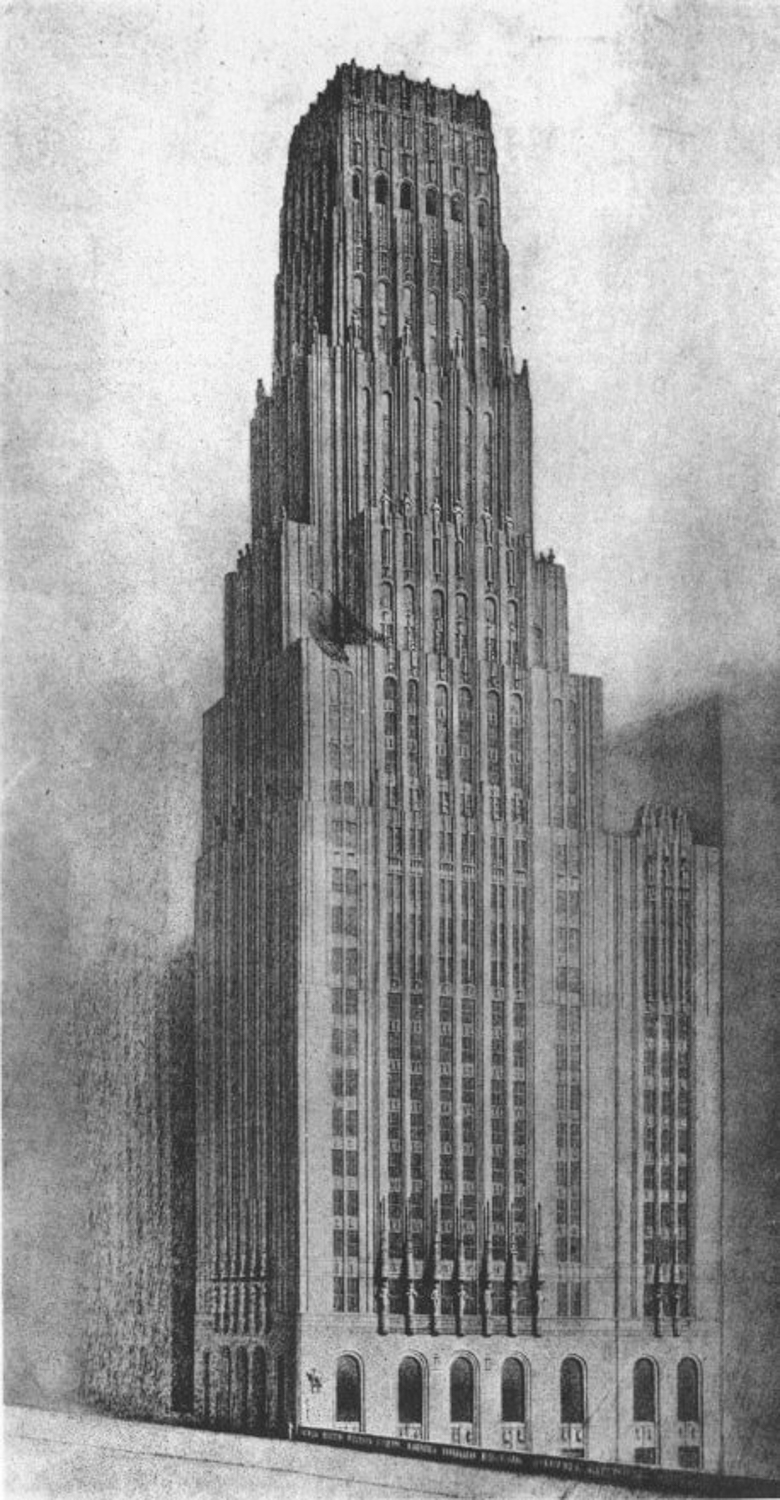 The staggered tower drawn by Eliel Saarinen came as revolutionary for the field of architecture. The stepped facade imbued the verticality of the skyscraper with a neo-gothic flare, setting a precedent that many would follow. The first tower built in San Francisco directly inspired by Saarinen’s proposal was 140 New Montgomery Street, finished in 1925. The design was again rearticulated for 235 Montgomery Street. 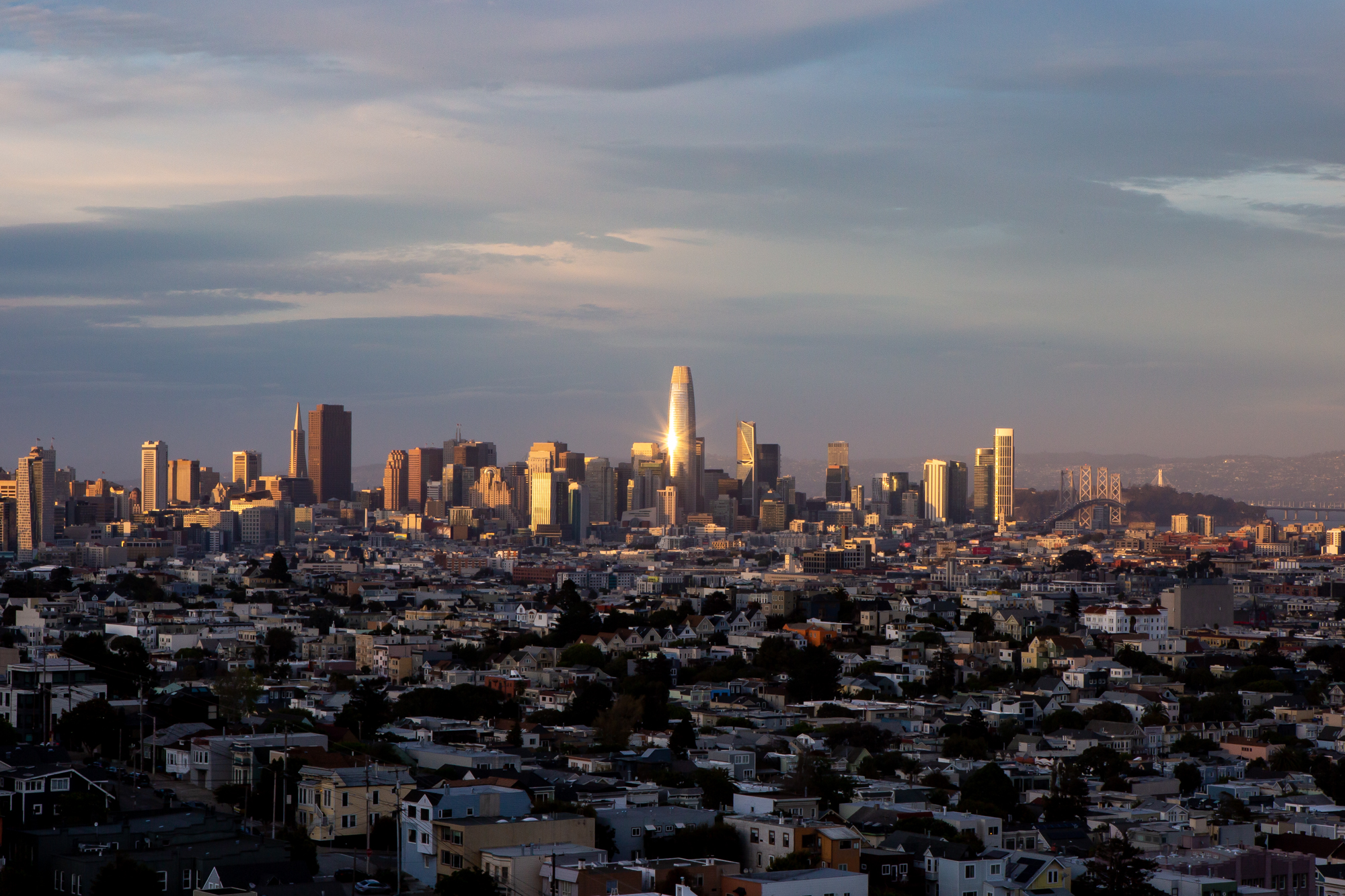 Before establishing his own practice, Pelli worked as a project designer for Eliel’s son, Eero Saarinen. The influence can be seen with Pelli’s design for the Petronas Towers in Kuala Lumpur, the International Finance Centre in Hong Kong, and even 30 Hudson Street in New Jersey. Pelli was drawn to the stepped tower and tapered crown. However, the Salesforce Tower stands apart from the rest for its simplicity.

As written by the Pelli Clarke Pelli architecture firm, “Its gentle, curving form evokes lightness and enthusiasm with layers of graceful curves and rounded glass corners that reach beyond the top floor and appear to dissolve into the sky. “

2 Comments on "Number One: The Salesforce Tower in SoMa, San Francisco"