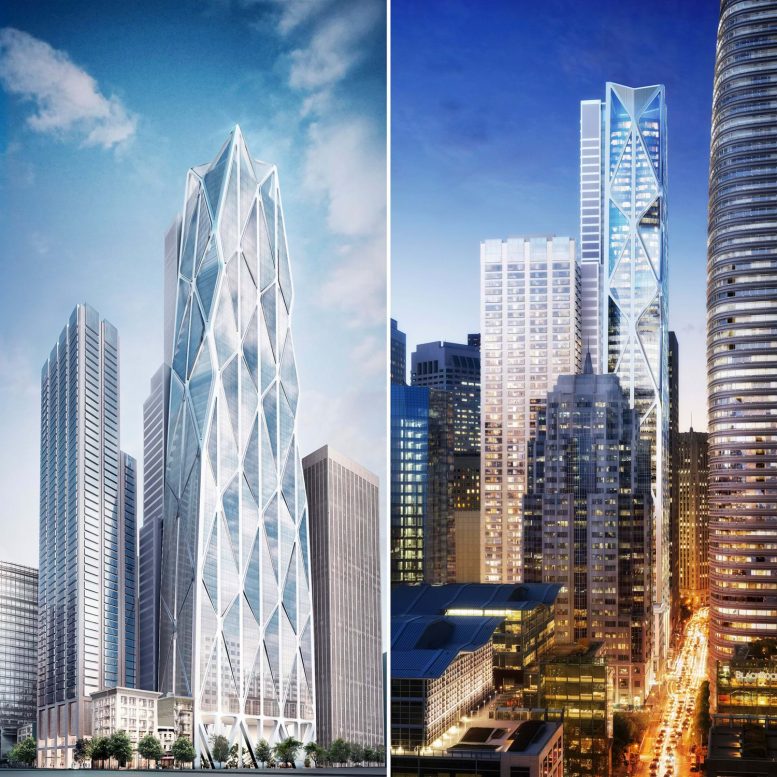 Oceanwide Center side view and frontal view, rendering of design by Foster and Partners

In January of 2021, the Oceanwide Center in San Francisco was expected to become the second tallest tower in the Bay Area. Construction was put on hold in October of 2020, and subsequent issues throughout 2021 have imperiled Oceanwide’s plans. However, foundation work is complete, and there remains hope that a new developer could pick up and finish the highly anticipated 910-foot tower designed by Foster + Partners. 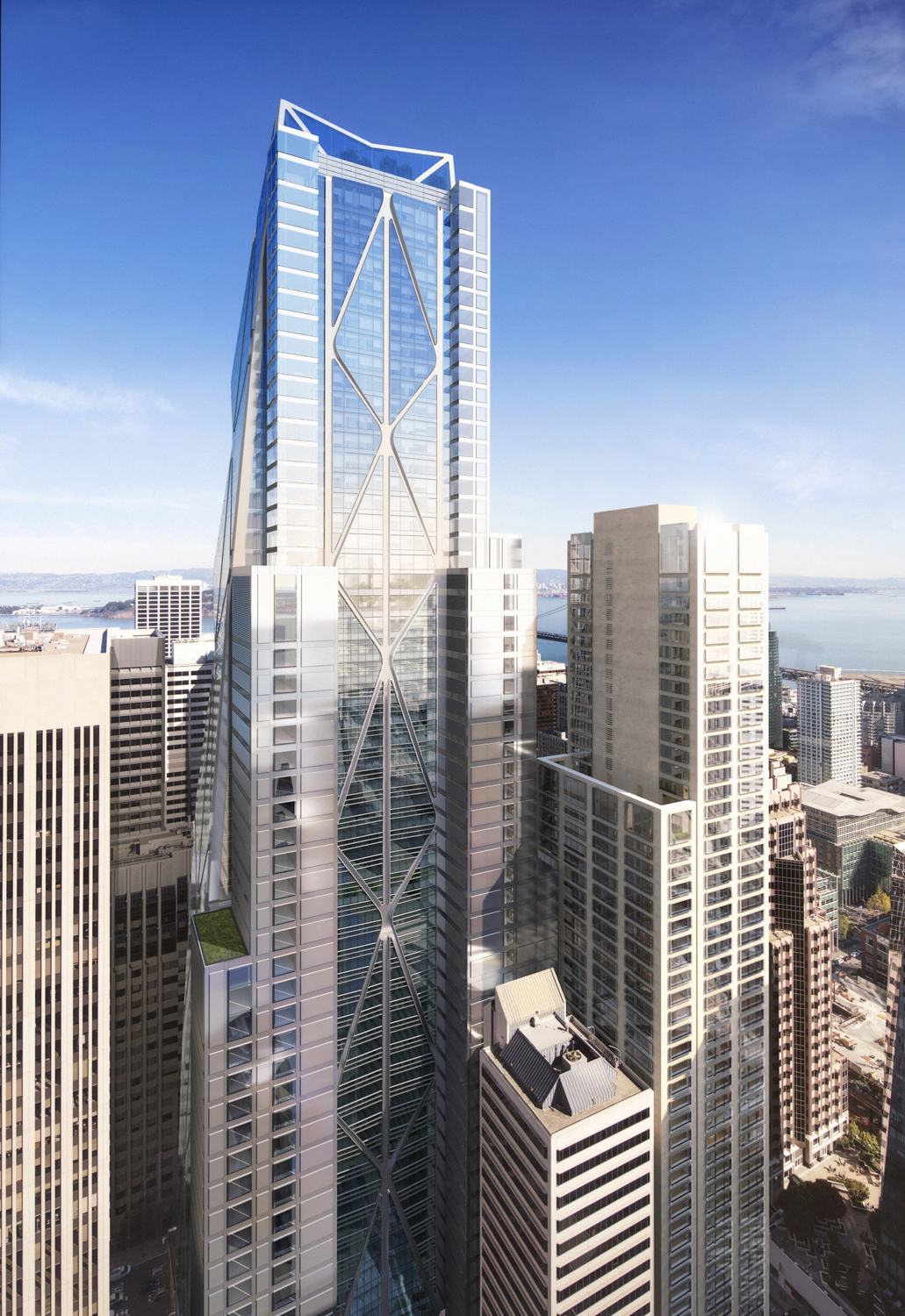 The original plan for Oceanwide Center would create two towers yielding 2.1 million square feet, with 1,040,400 square feet of offices, 798,400 square feet for 280 apartments, 245,900 square feet for the Waldorf Astoria, and 12,500 square feet of ground-floor retail. Of the residential units, a third would be affordable housing, and parking would be included for 350 vehicles and 525 bicycles. In addition, the two historic buildings at 76-78 and 88 First Street would be retained and renovated. 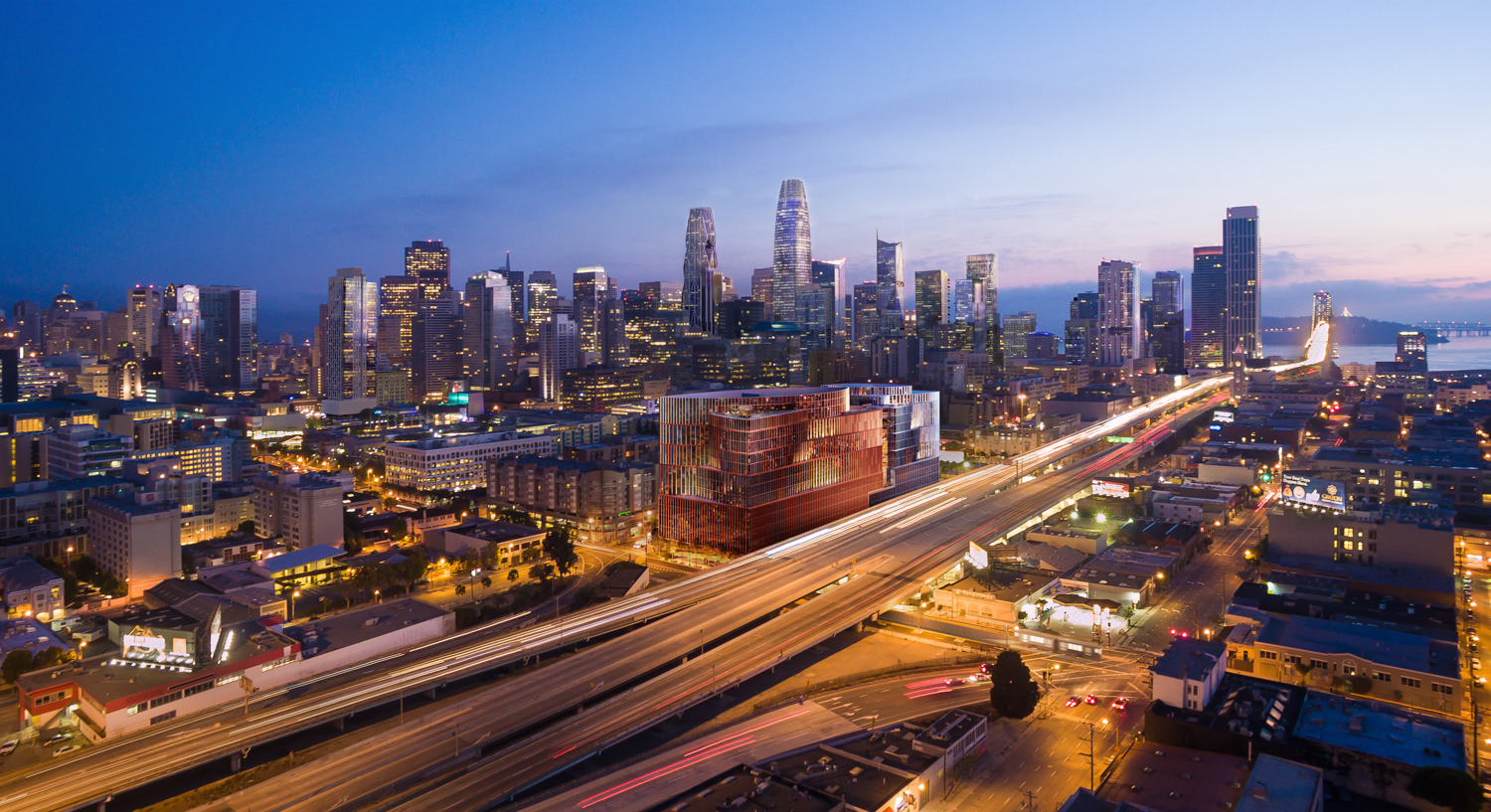 725 Harrison Street with the Oceanwide Center and Salesforce Tower in the background, design by HOK Architects 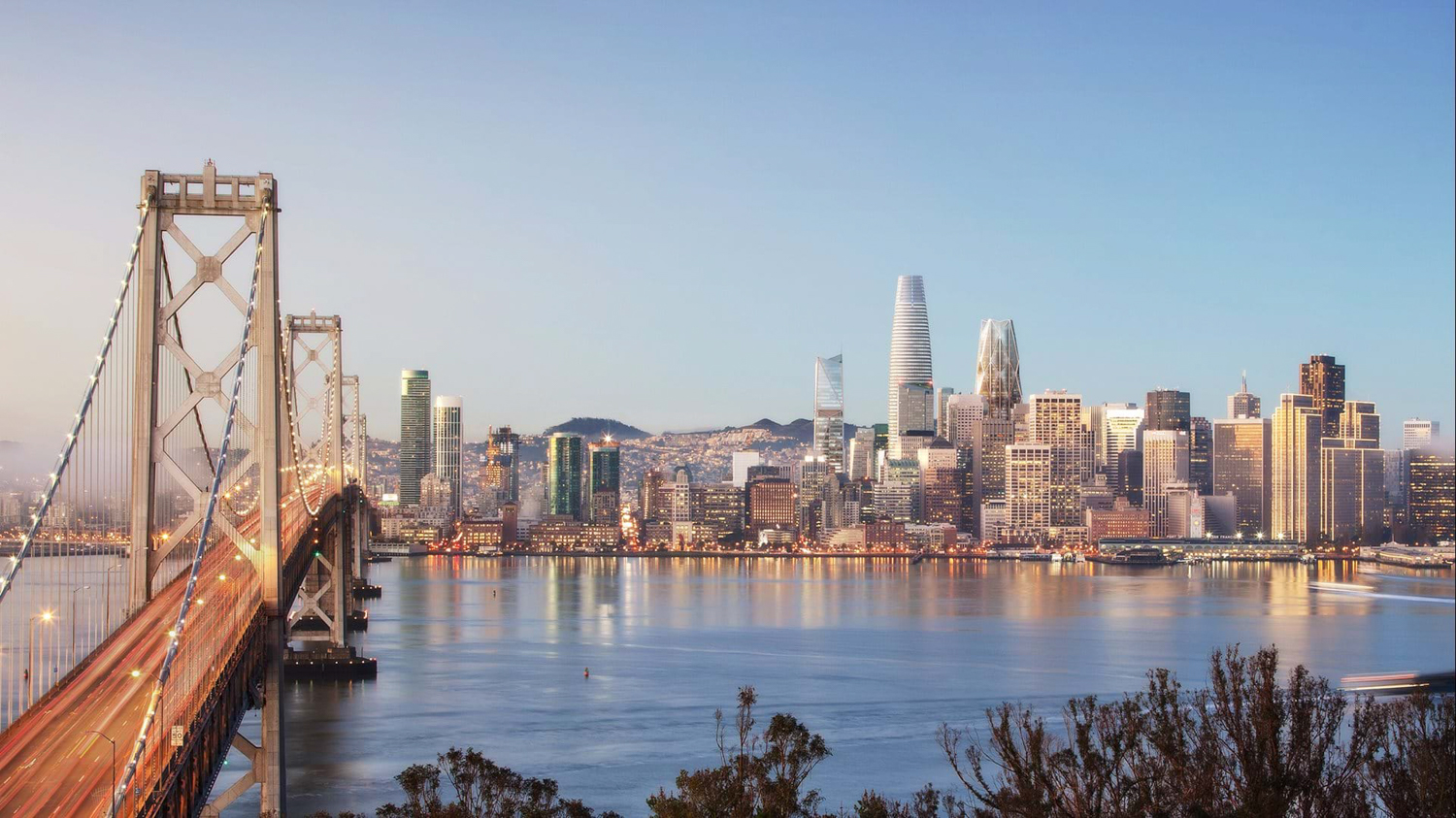 Oceanwide Center in the San Francisco skyline, rendering of design by Foster and Partners 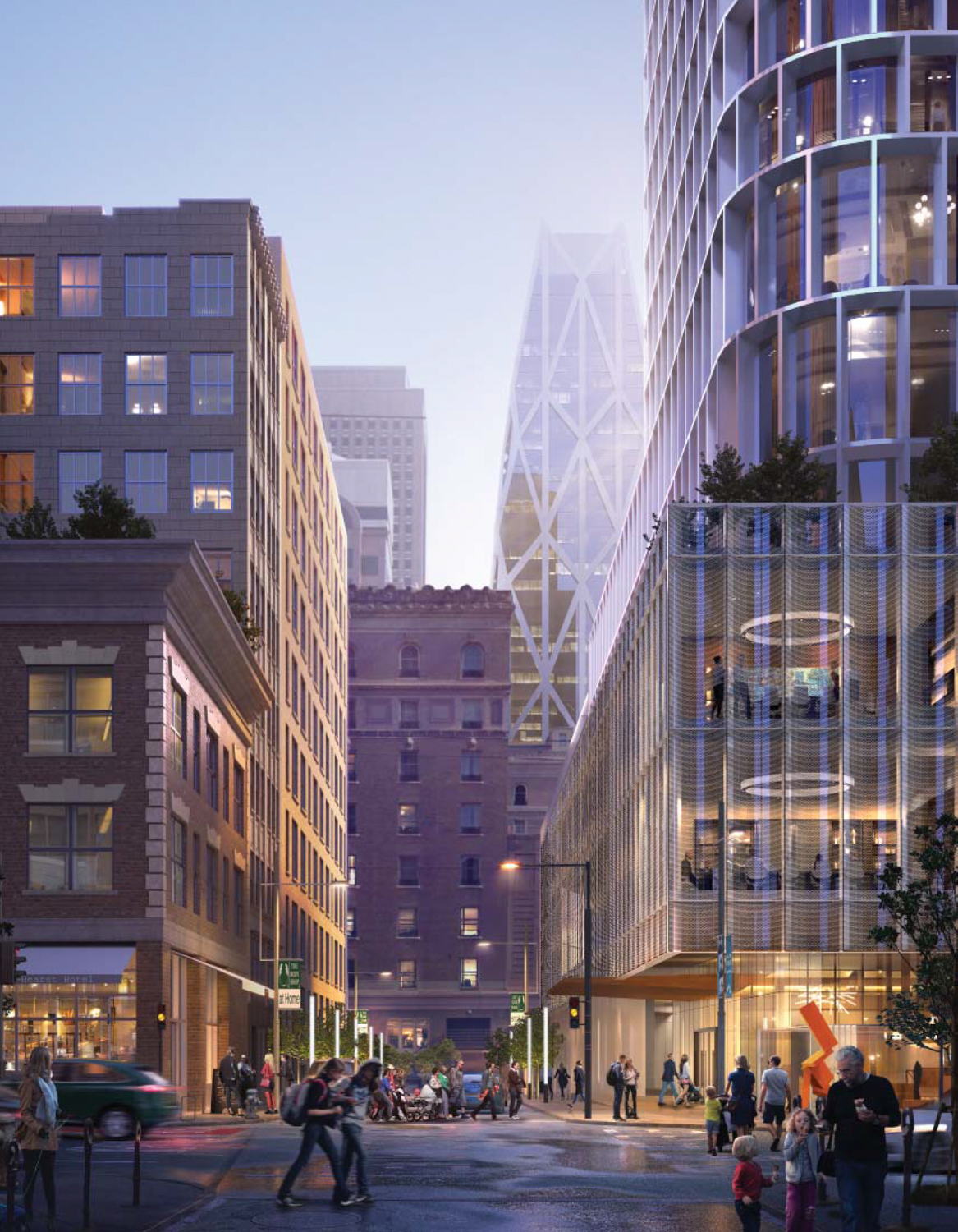 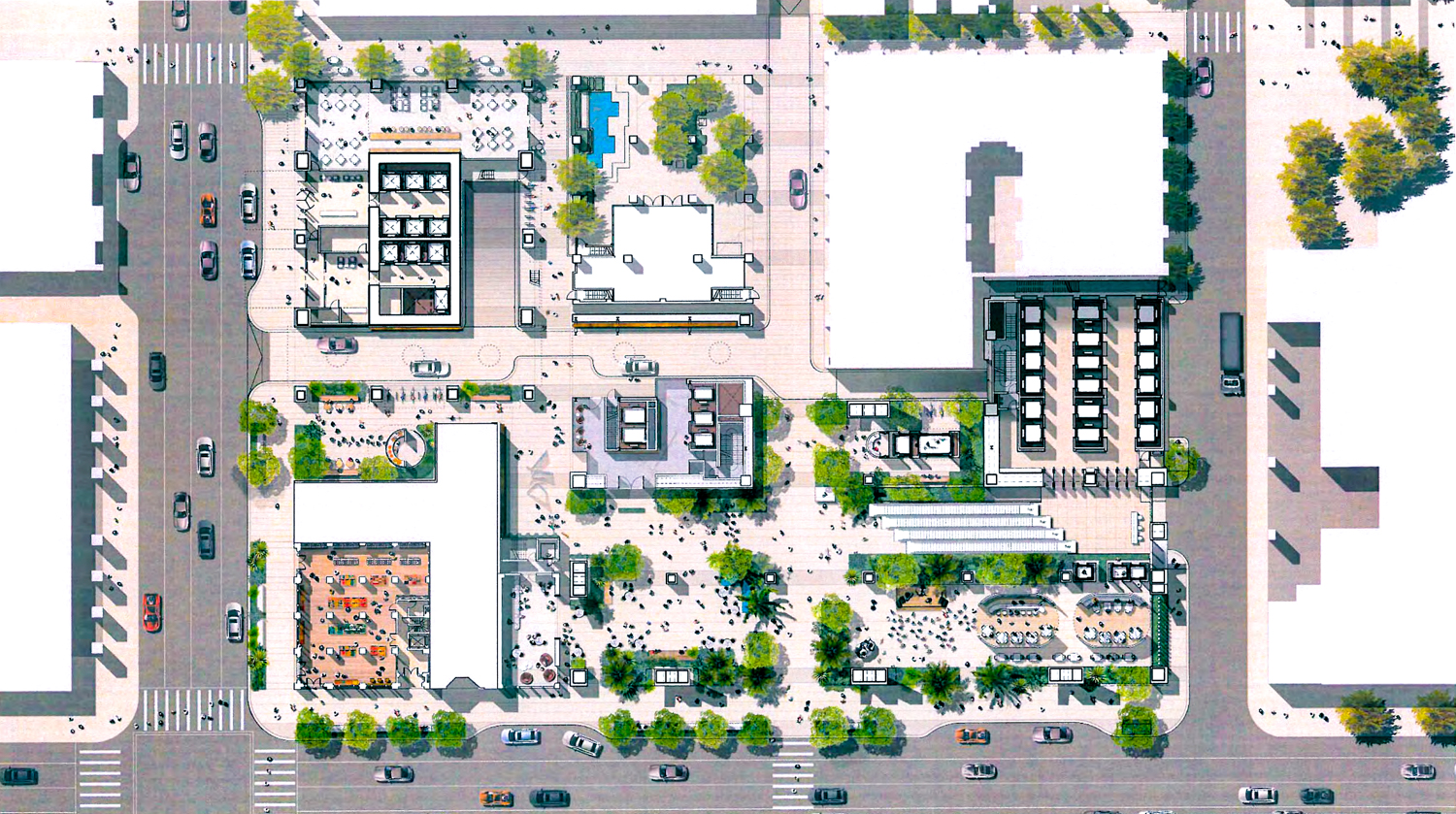 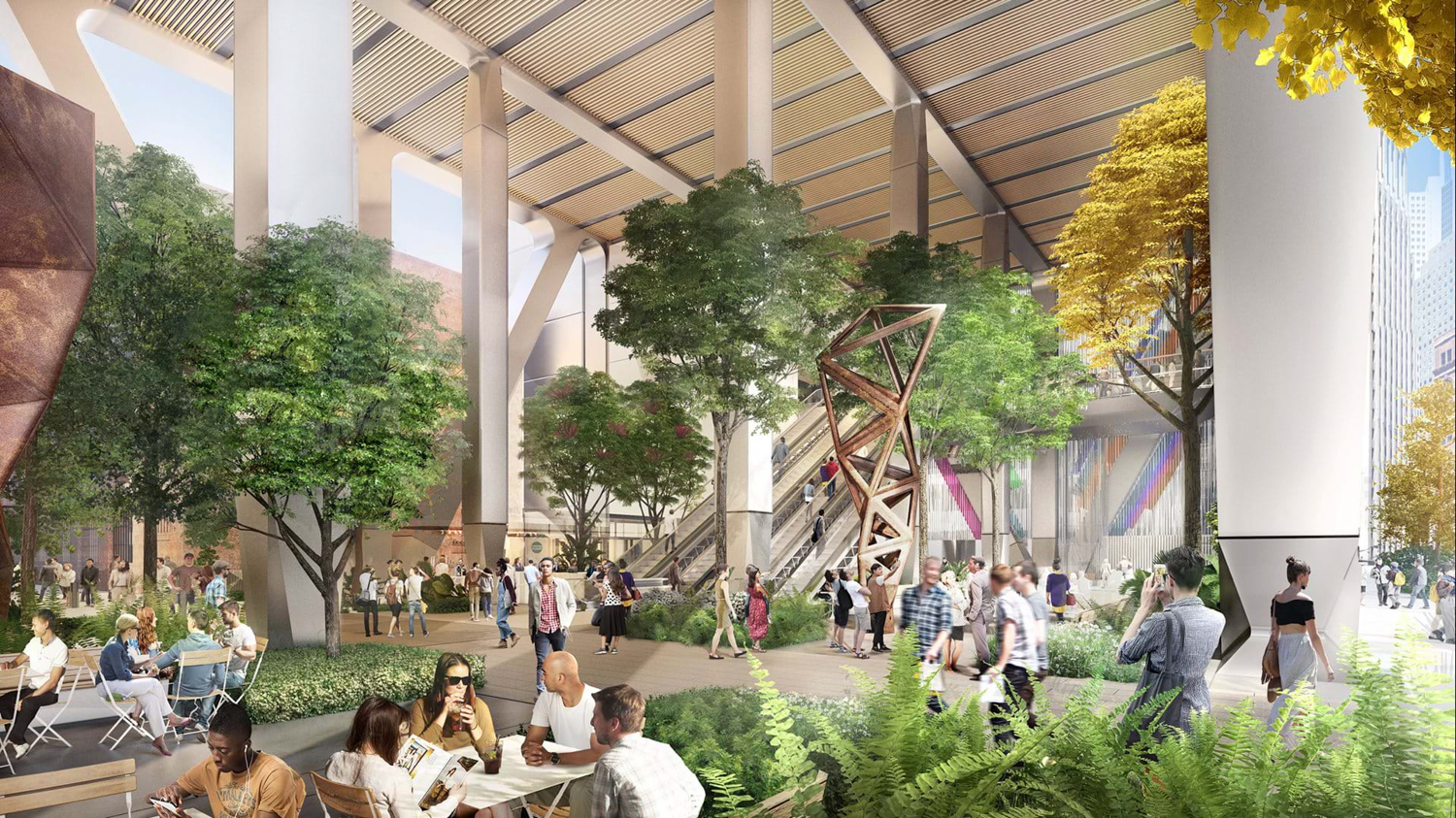 Oceanwide Center public plaza with seating, trees, and sculptures, rendering of design by Foster and Partners 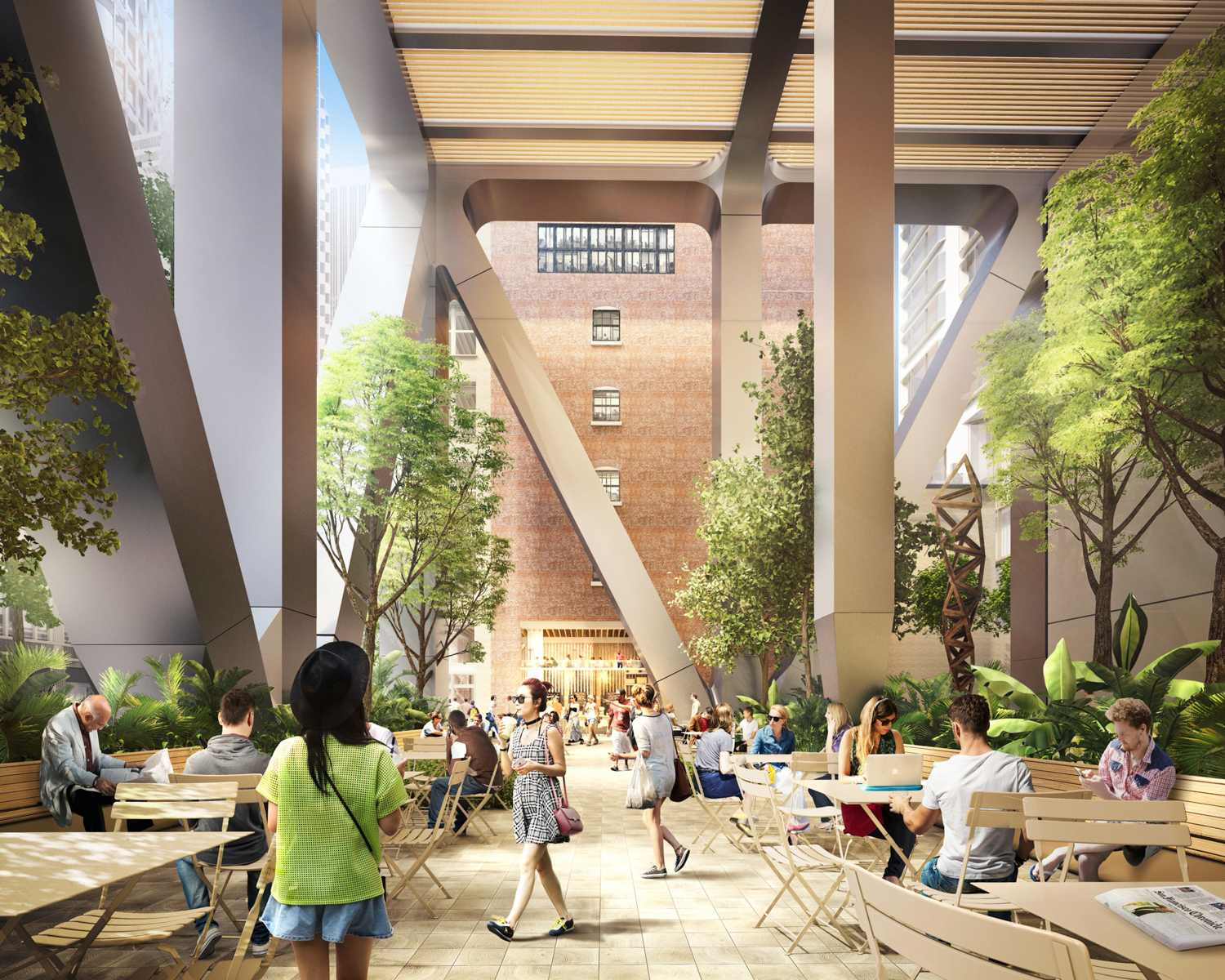 Oceanwide Center base plaza, rendering of design by Foster and Partners

50 First Street would rise 61 floors with a pinnacle 910 feet above the streets, while 512 Mission Street would rise 54 floors to be 625 feet tall. Within the taller tower, there would b a million square feet of offices across 34 floors, 124 apartments across 24 floors, and ground-floor retail. The Mission Street tower would create 169 guest rooms and 156 apartments.

The ground level would open up to a 68-foot urban room with publicly accessible open space. The area would feature landscaping, seating, and various other pedestrian amenities. The public space would connect First Street to Jessie Street and Ecker Place, widen Elim Alley, and add a pocket park accessible from Mission Street.

Foster + Partners is responsible for the design of 50 First Street. The undulating facade would incorporate a complex curtain wall framed by steel latticework angled like scales culminating in a spiked crown roof above a sky garden. 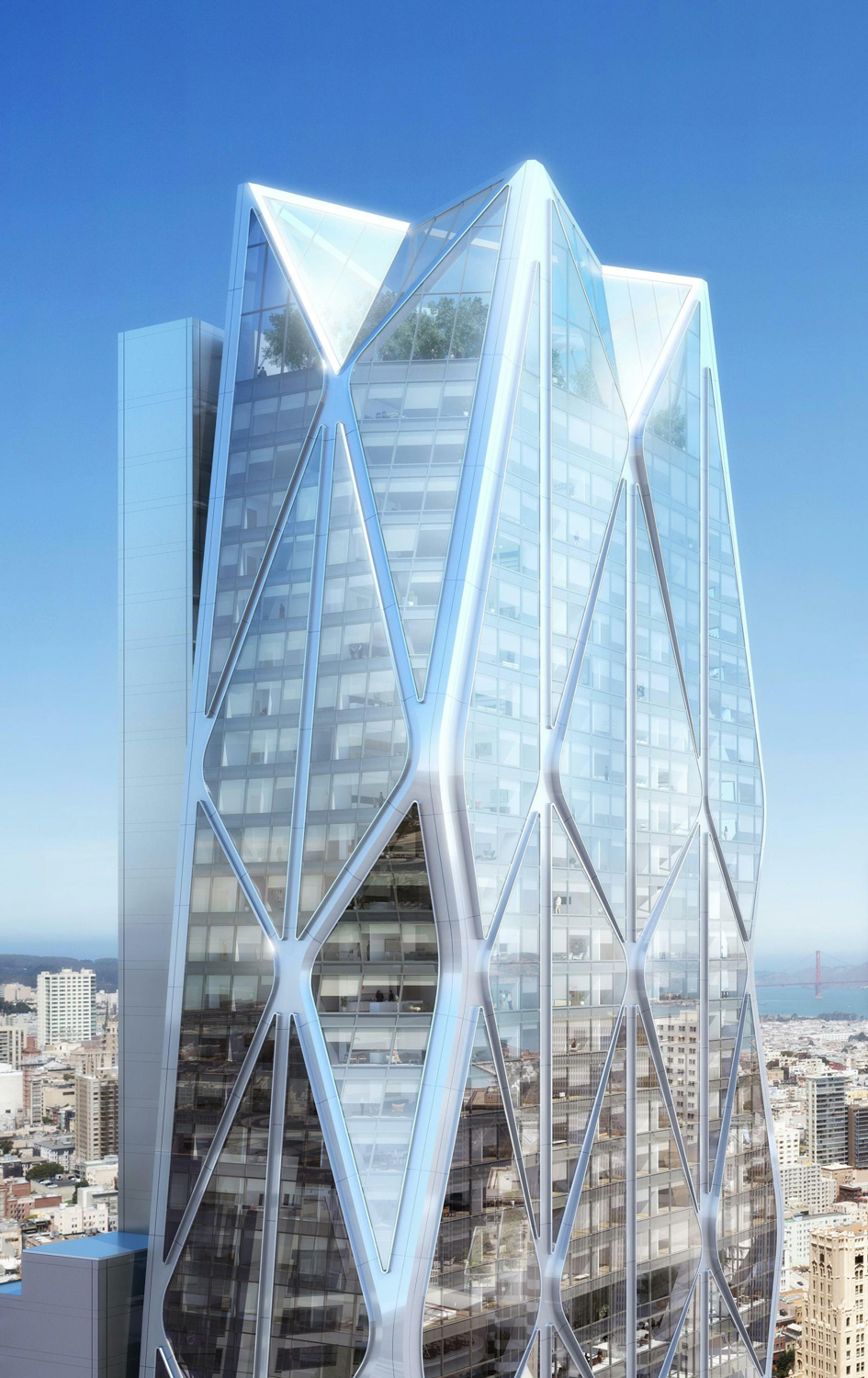 Oceanwide Center top with view of the rooftop terrace, rendering of design by Foster and Partners 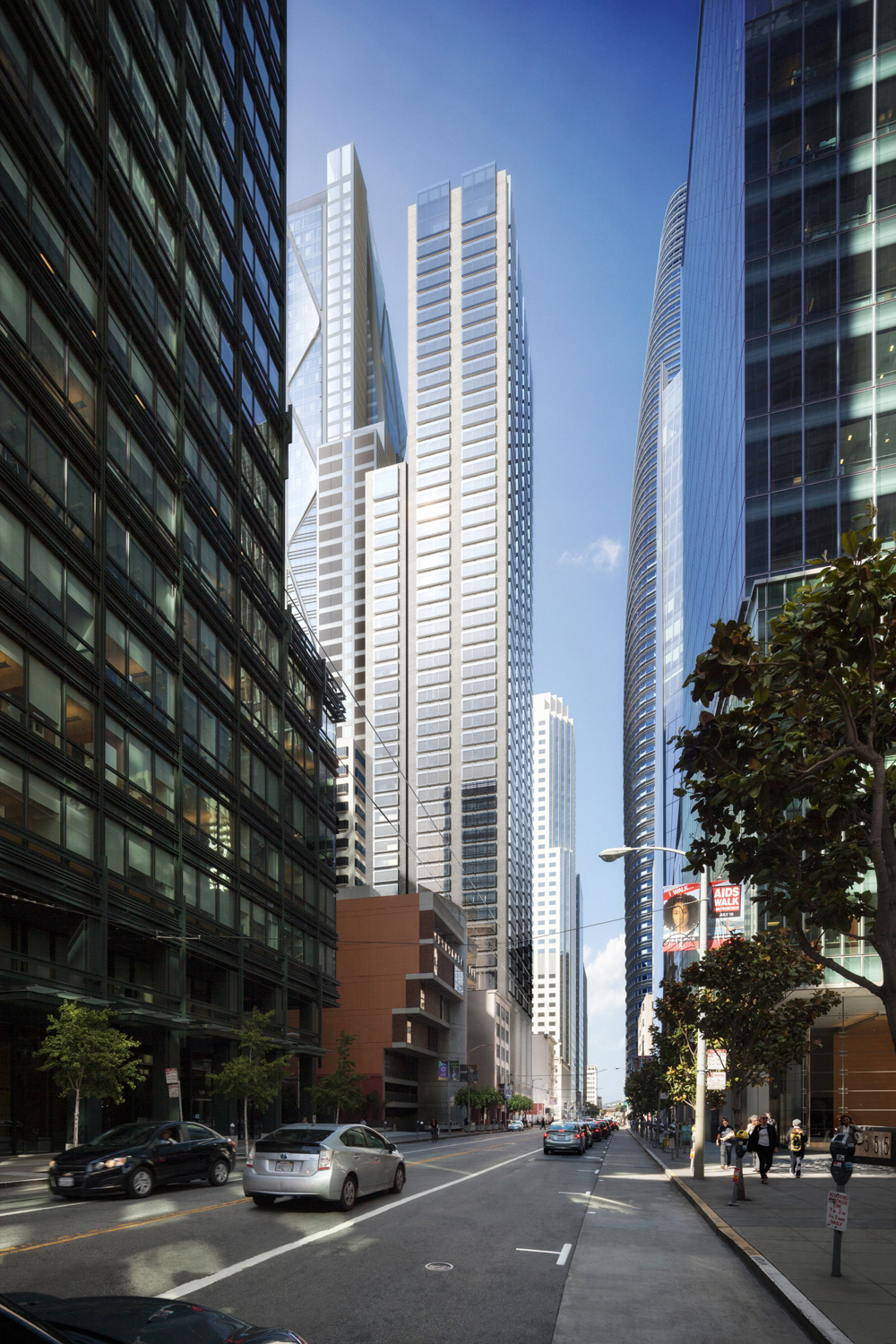 Oceanwide Center hotel at 512 Mission Street, rendering of design by Foster and Partners

In contrast, 512 Mission Street would be a historicized tower clad with stone to resemble the original Waldorf Astoria tower. Heller Manus Architects is responsible for the design, including raised glass box windows offset from the facade. 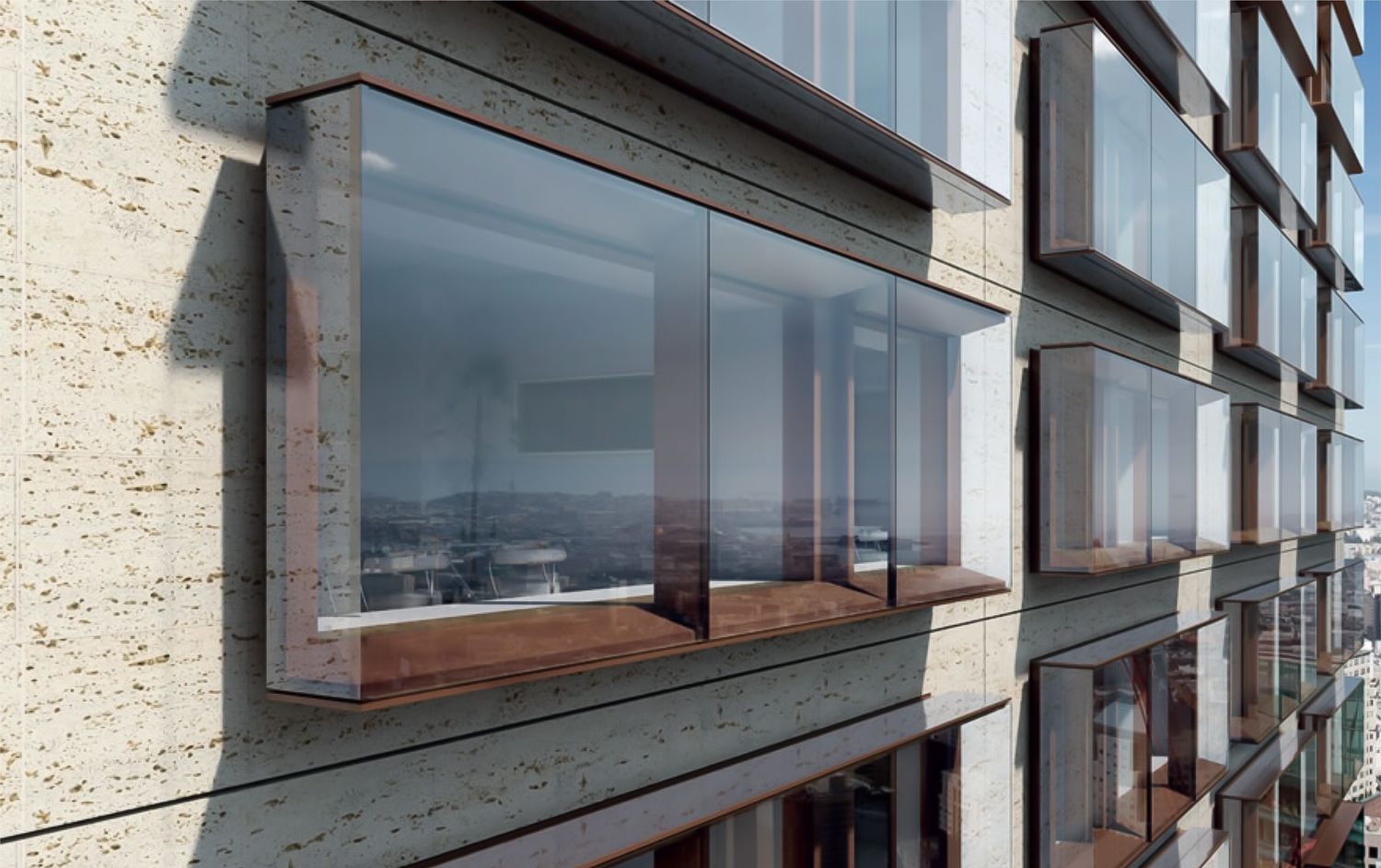 City records show the property sold in February of 2015 for $296 million. Building permits were subsequently filed in October 2015, with an estimated construction cost of $520 million. Construction started with groundbreaking in 2019. Foundational piles have been drilled 400 feet below ground, well into the city’s bedrock.

In 2019, the developer suspended plans for 512 Mission Street. Subsequent news suggests the shorter tower could be reconfigured and may not become the full 625-foot tower initially planned. If built alongside Oceanwide and 50 Main Street, 512 Mission would become the 11th tallest building in the city, between One Rincon and The Avery. 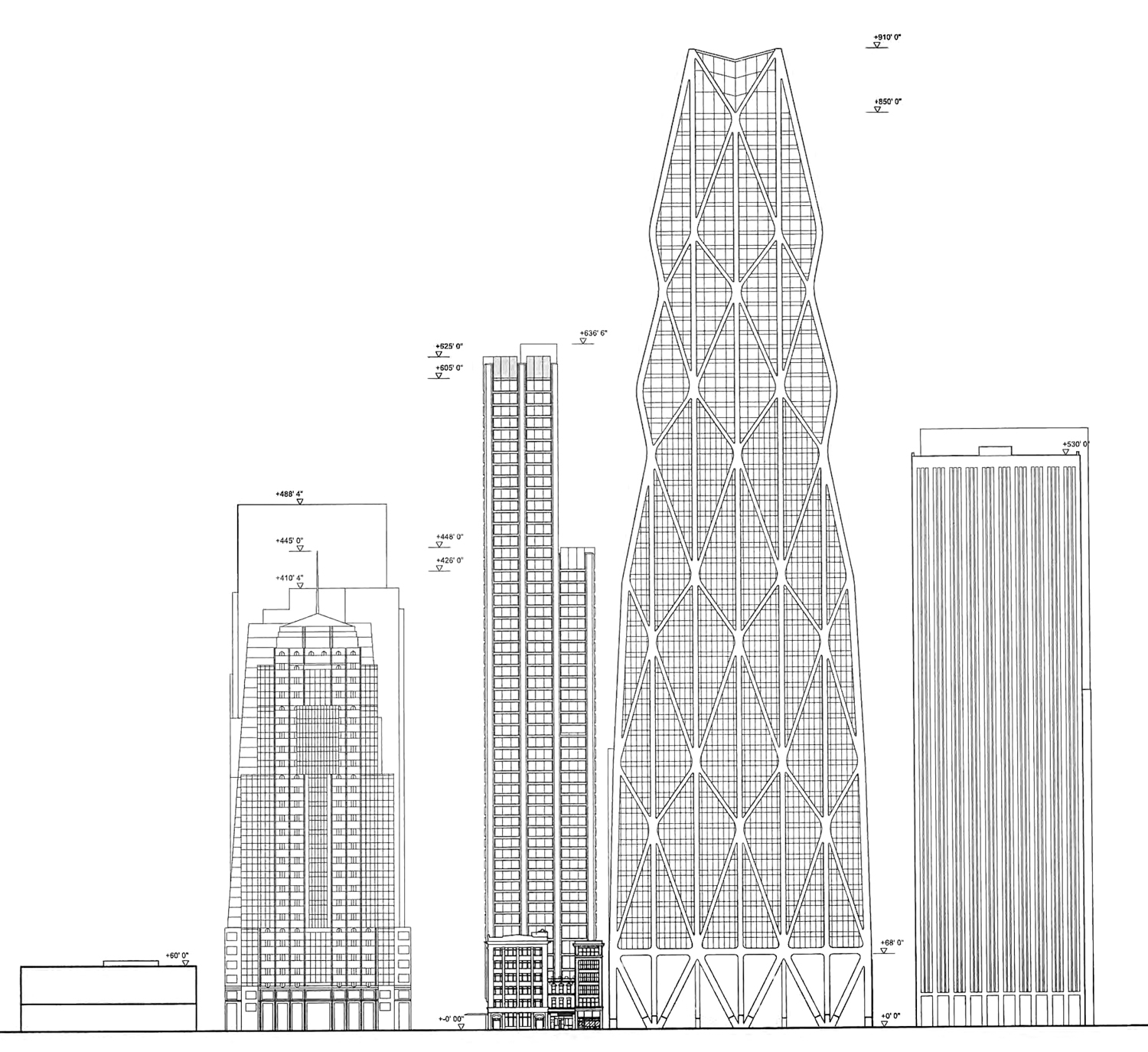 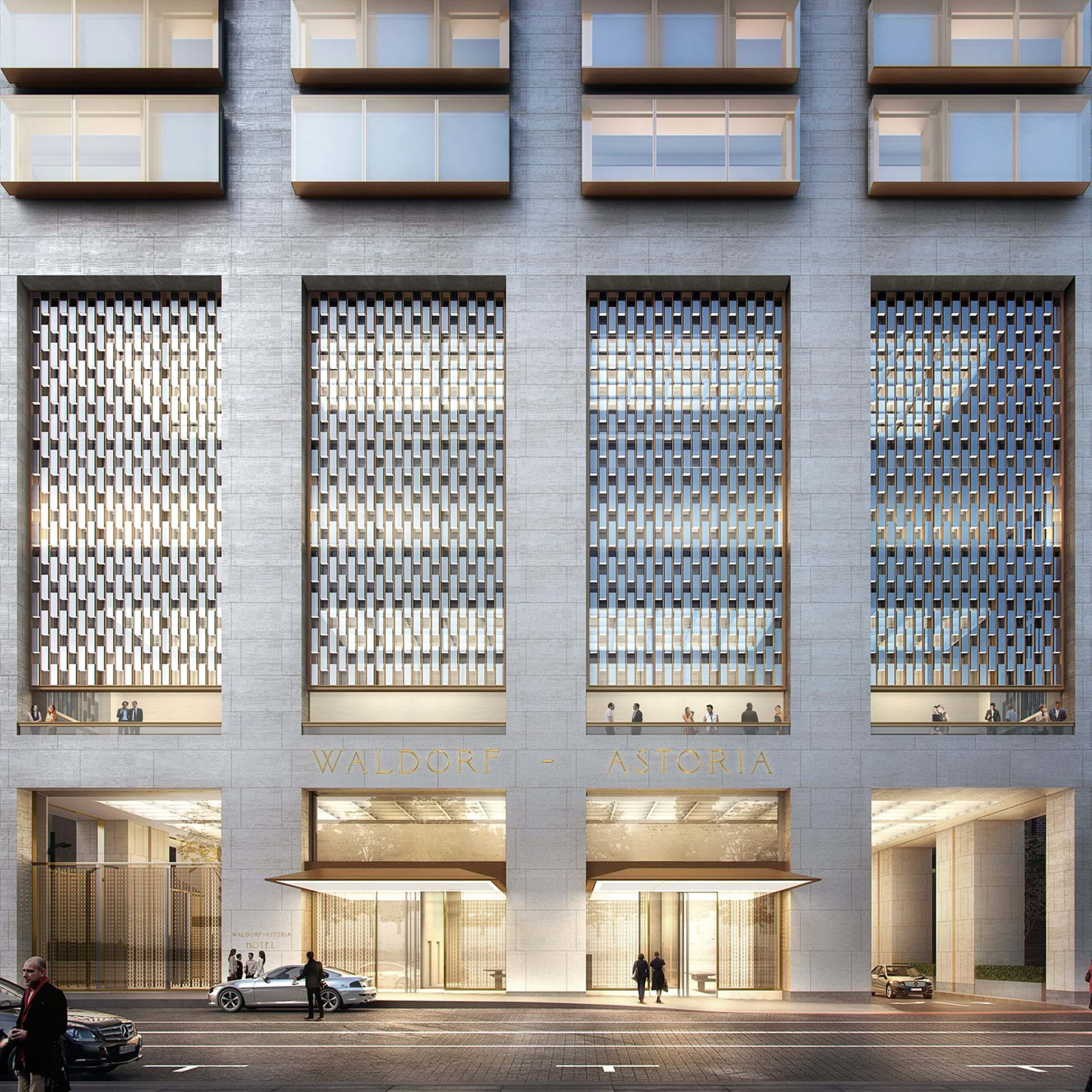 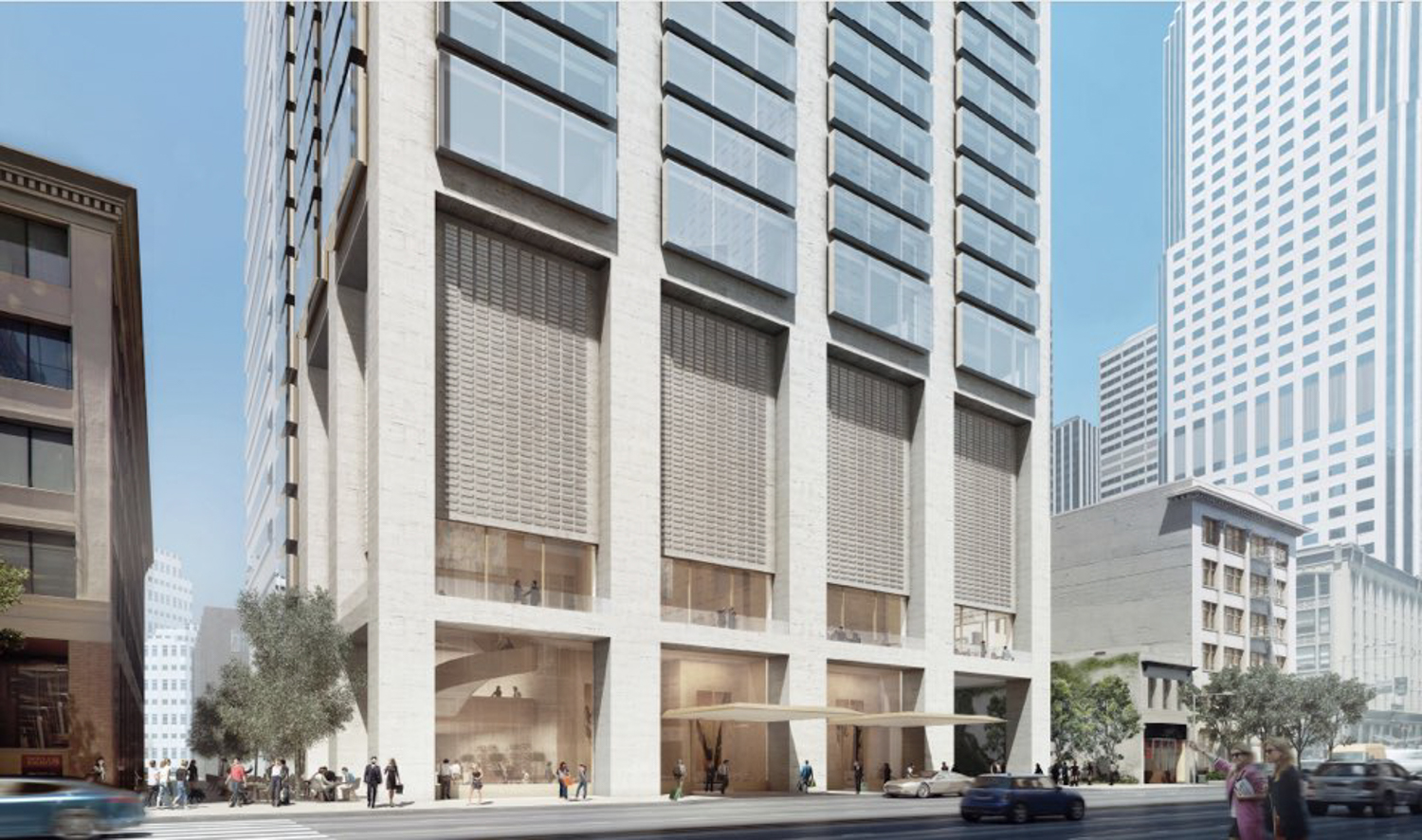 Waldorf Astoria base, rendering of design by Heller Manus Architects

Although the development has been overshadowed by trouble for years, the issues in 2021 began in mid-January, when Swinerton and Webcor announced they no longer were the general contractors building Oceanwide Center. The Chinese developer had not paid the contractor for months, eventually incurring approximately $150 million in unpaid work claims.

Reporting by Laura Waxmann revealed that Oceanwide was considering a joint venture with Boston Properties to save the development in September. The project’s originally proposed 625-foot hotel at 512 Mission Street would be replaced with 109 condominiums.

However, in October of 2021, after defaulting on $334 million, China Oceanwide Holdings’ offshore creditors seized control of the stalled skyscraper project. The issues for Oceanwide Center in America also extend to New York, Los Angeles, and Hawaii. 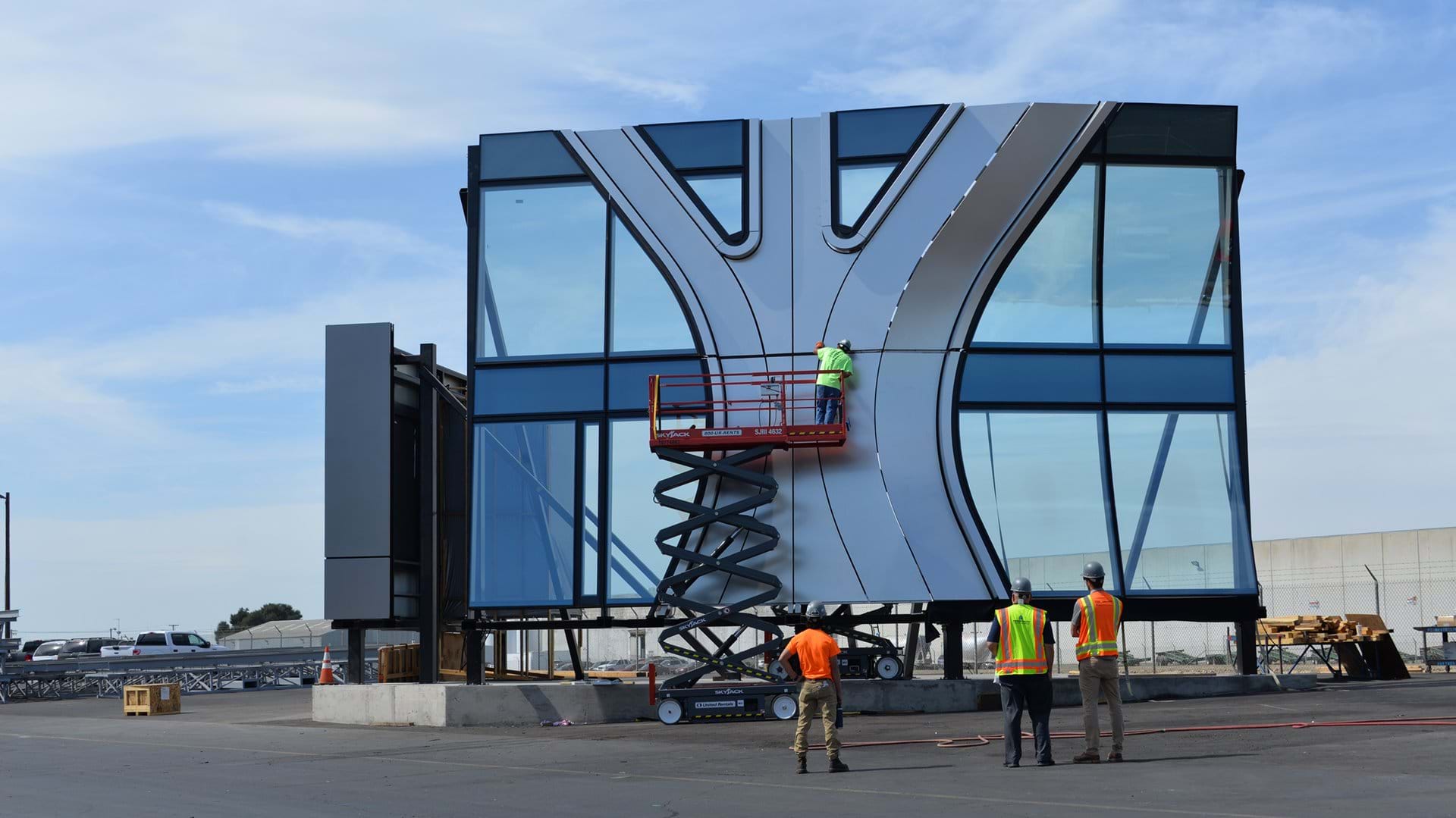 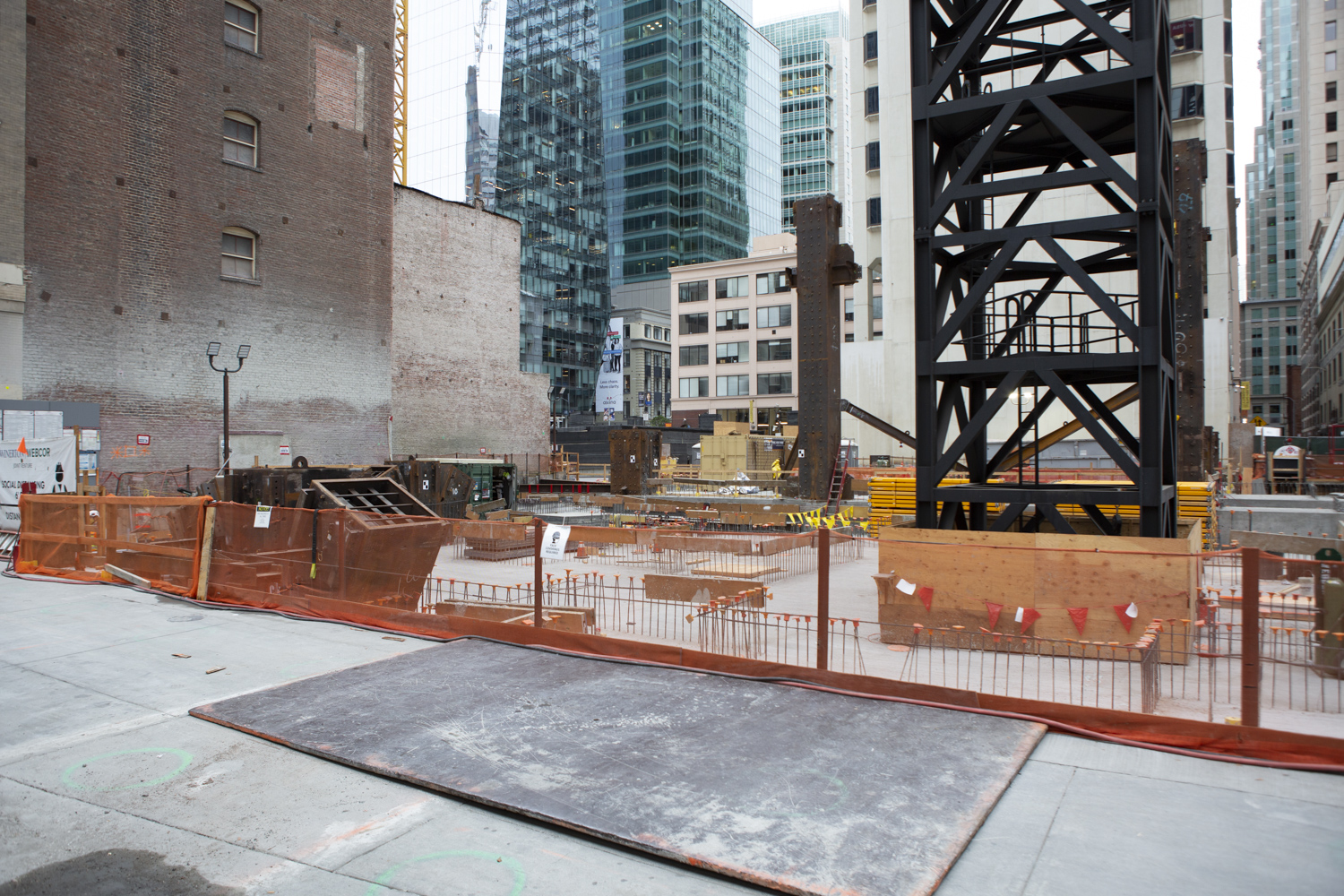 For now, the future of the Oceanwide Center is unclear, even considering the immense capital and manpower already invested in the project. Regardless, it appears the site will be mothballed for the foreseeable future.