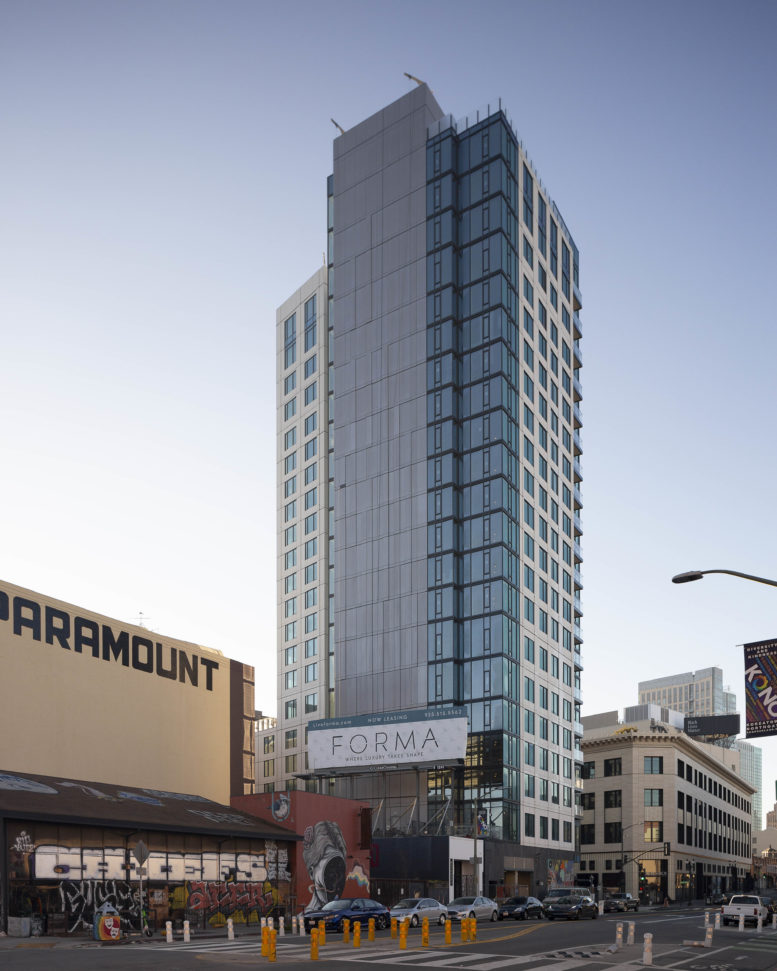 Construction work is wrapping up for Forma, the 24-story residential tower at 2016 Telegraph Avenue in Downtown Oakland. The structure adds 223 new units to the city, which are unambiguously market rate, with studios starting at $2,690 per month and three-bedroom penthouses for $13,190 per month. Holland Partner Group is responsible for the development after taking over plans by Lane Partners. 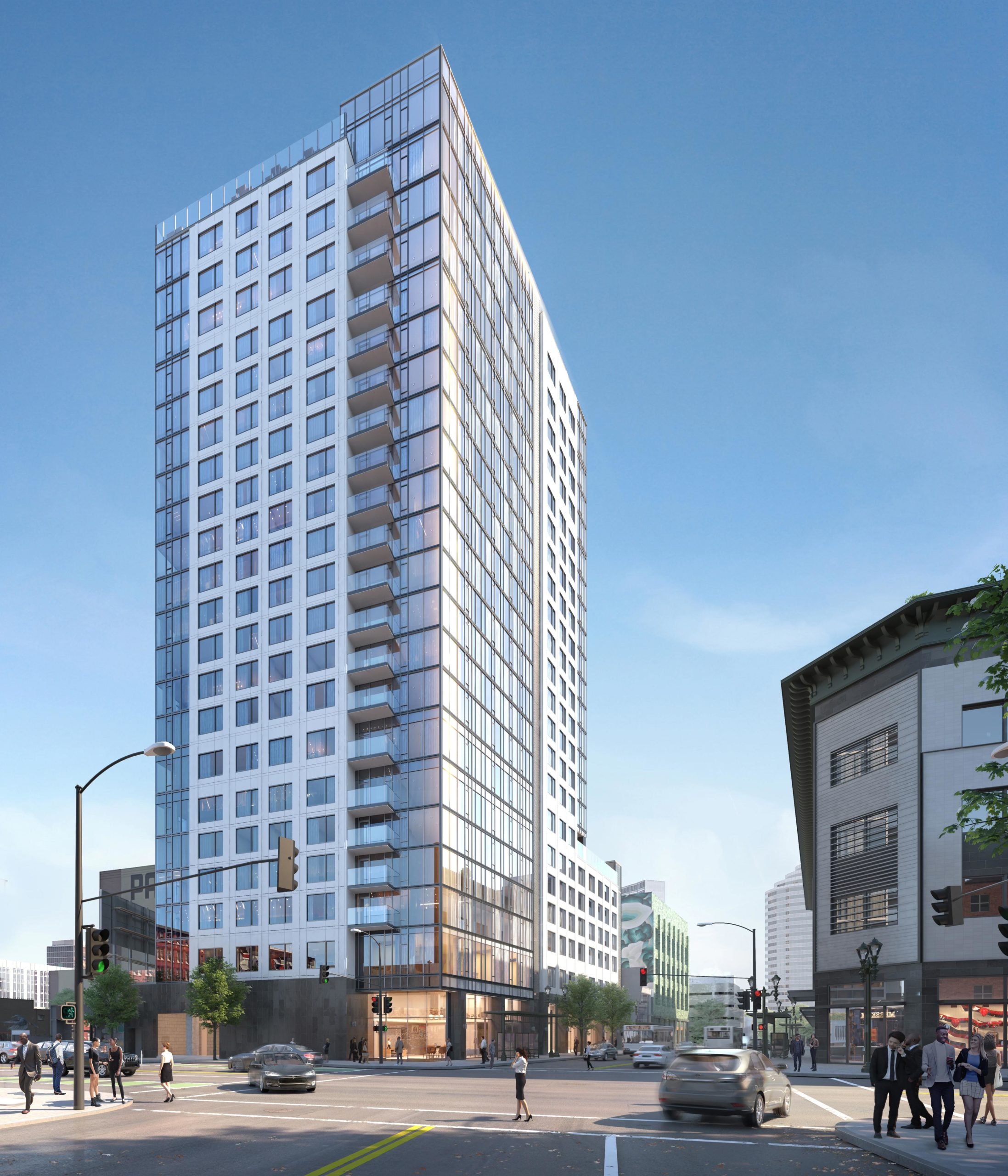 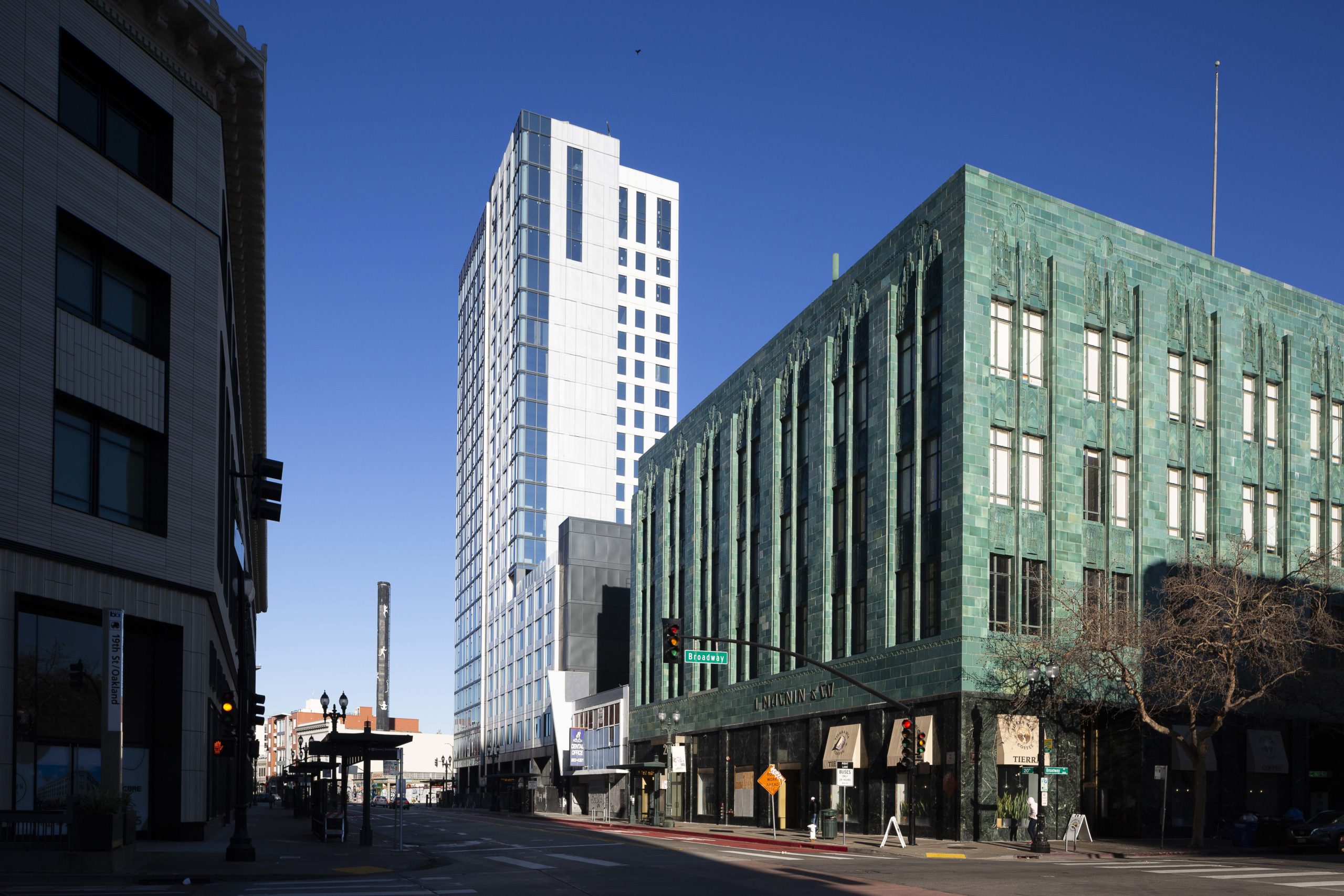 The 200,000 square foot mixed-use building will include a ground-floor residential lobby accompanied by retail space and three levels of above-grade parking. Residential amenities will include lounges with outdoor terraces on the 8th and 23rd floors, providing open-air decks with various activities like grills and a dog run. Inside, there will be bicycle parking, a locker room for parcels, a fitness center, dining spaces, and conference rooms. Units will also include a washer and dryer. 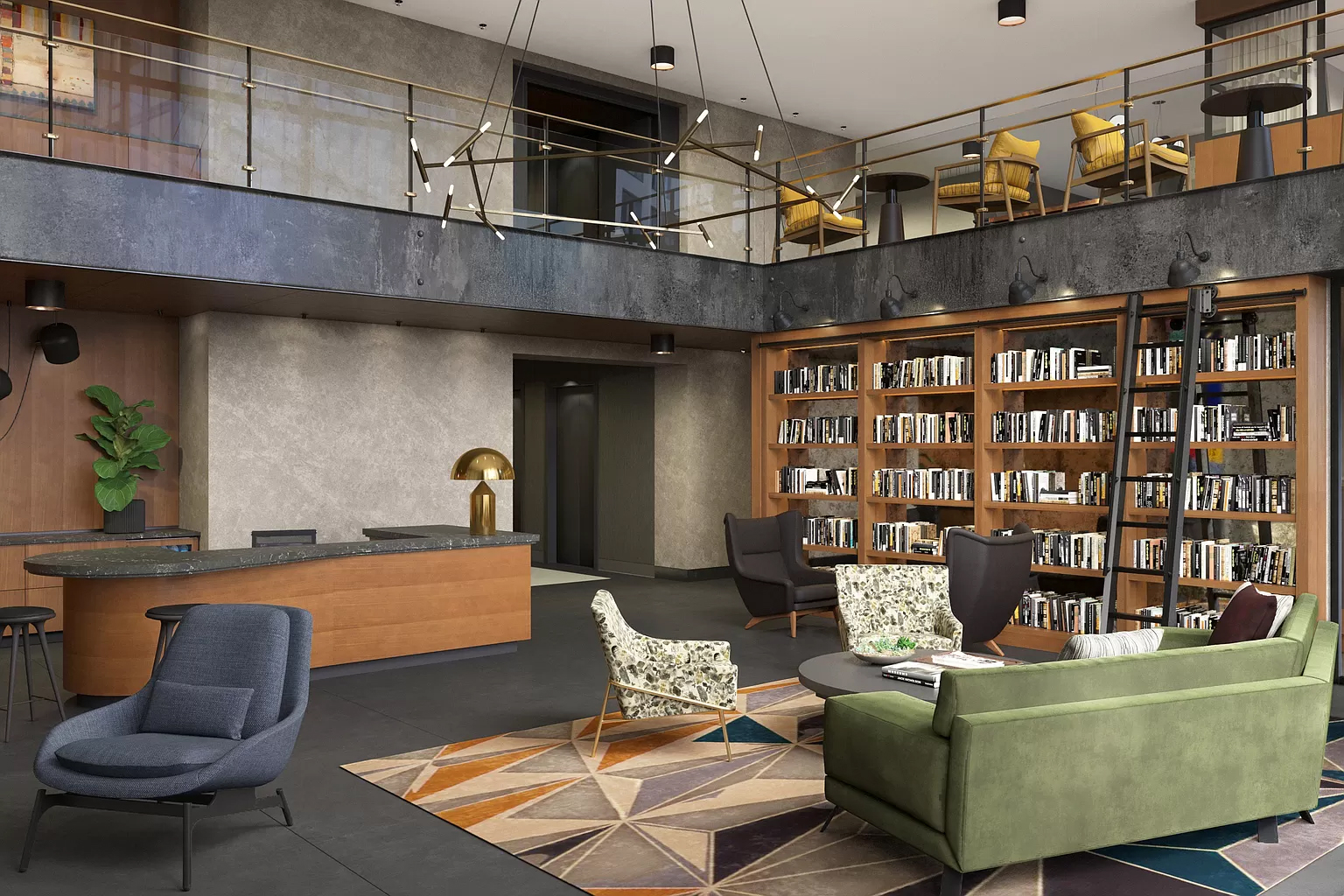 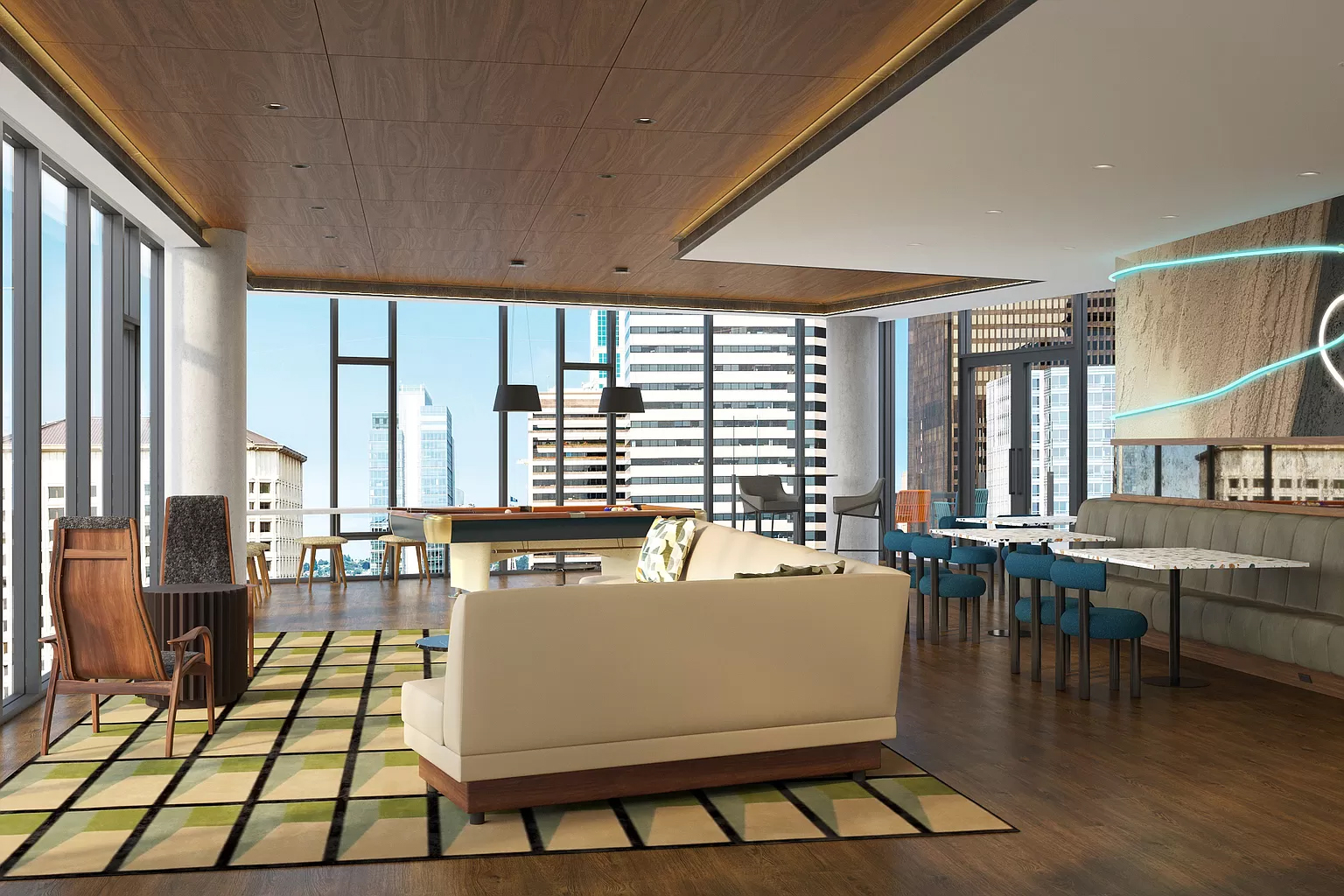 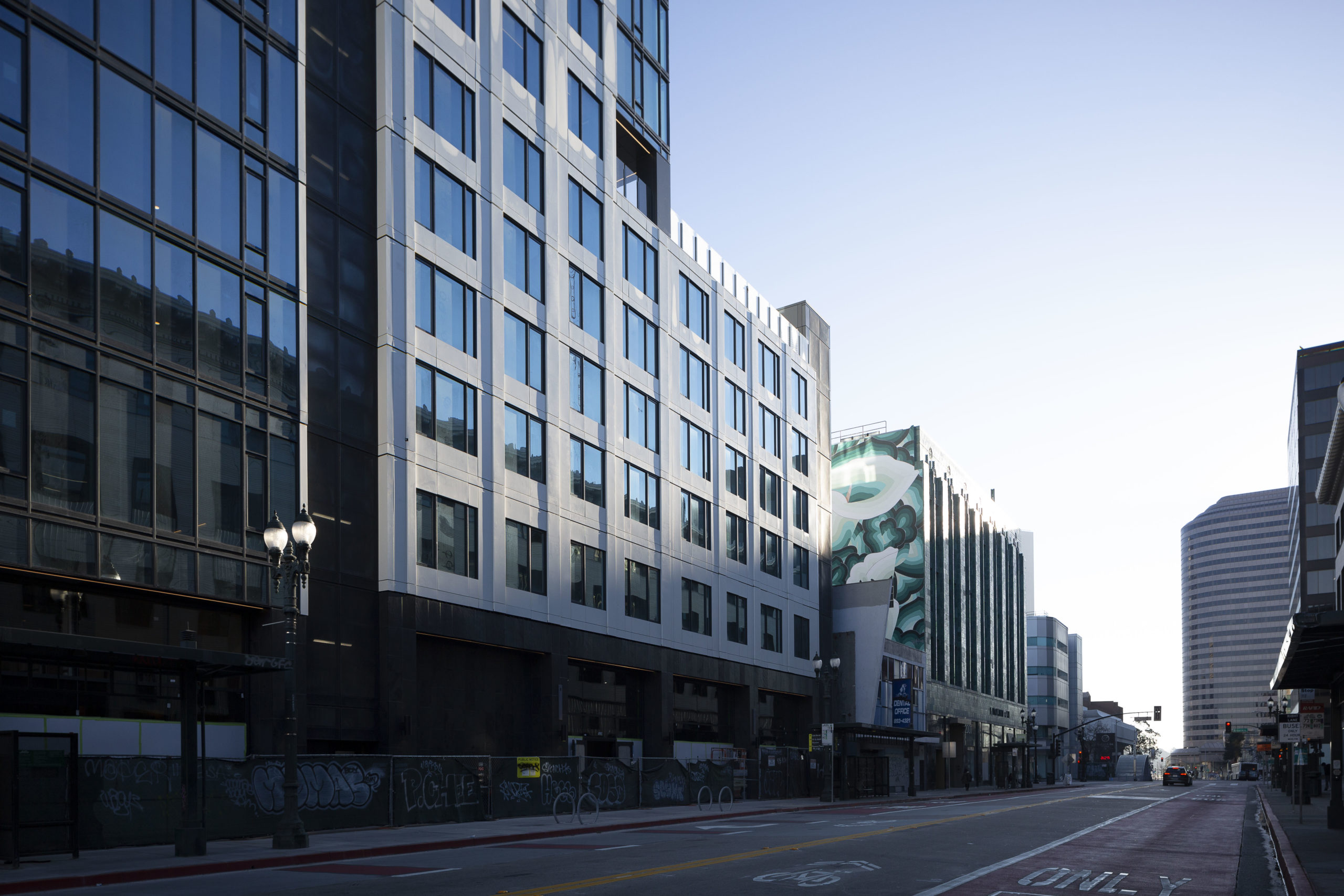 The construction pipeline contains yet more projects by SCB. These include 2359 Harrison Street, which is expected to break ground soon, 1900 Broadway, where construction is making significant progress, and the Lake Merritt BART Development in collaboration with PYATOK. 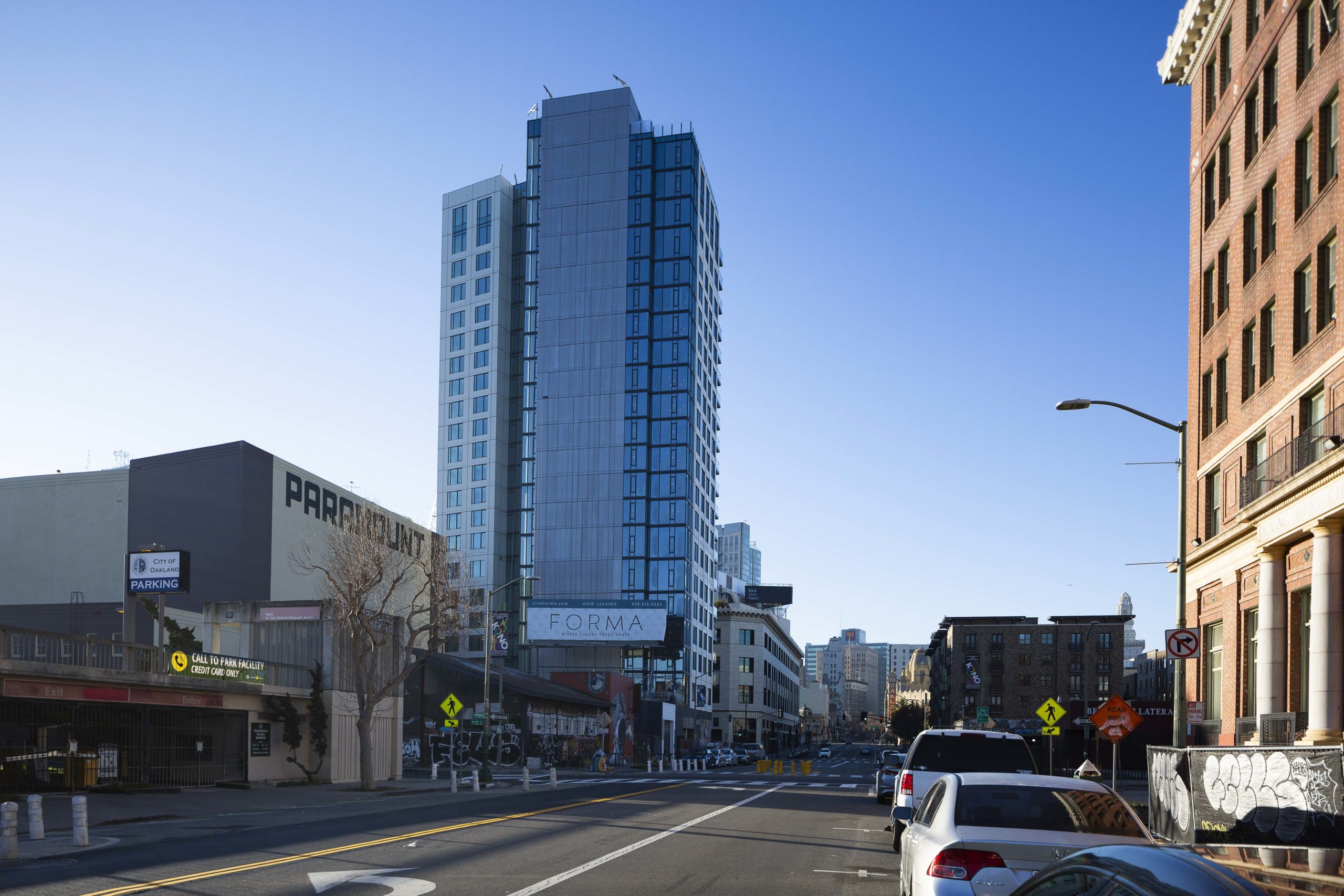 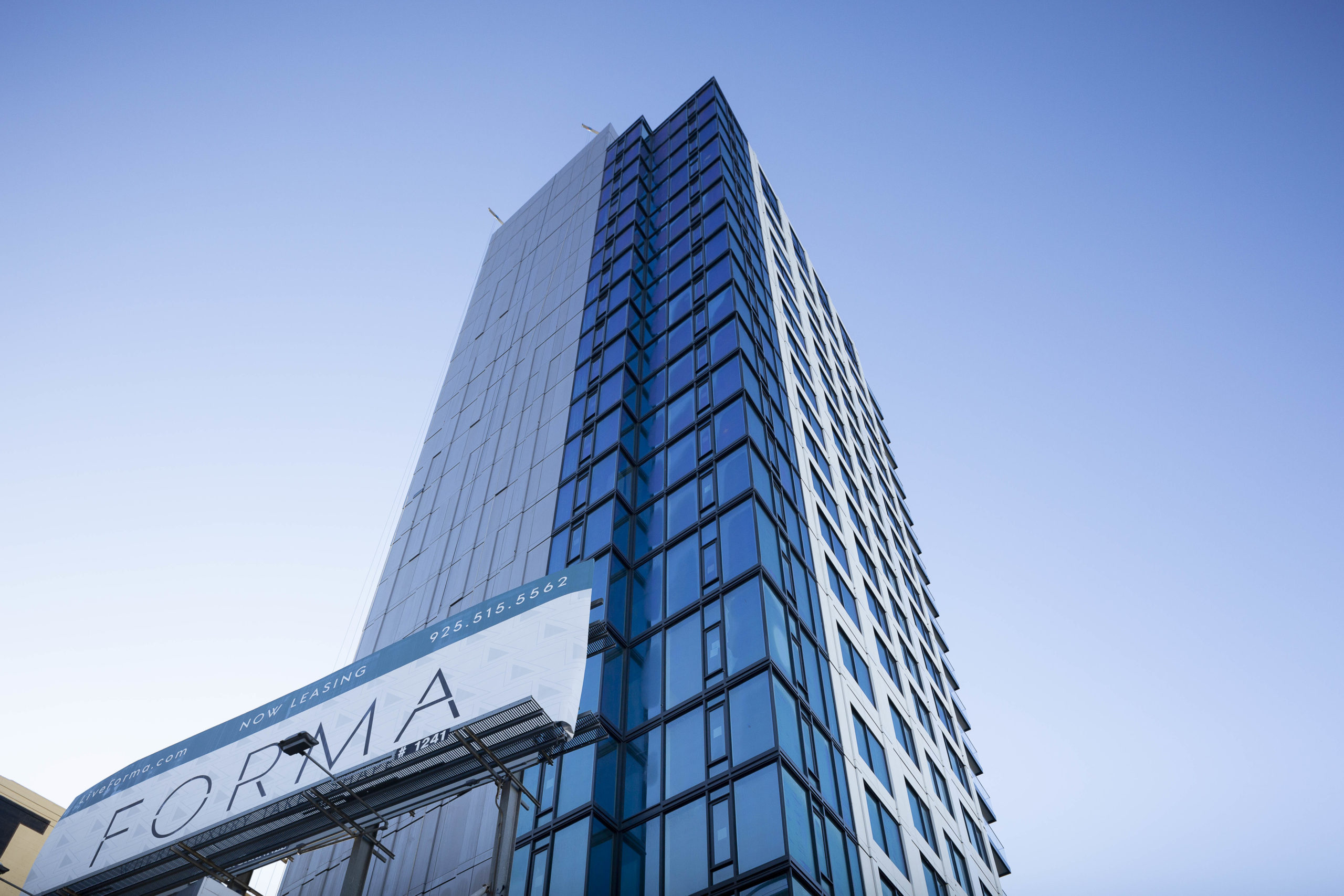 2016 Telegraph Avenue looking from the base up, image by Andrew Campbell Nelson

The property is located within the Uptown district, where Oakland Redevelopment Agency has plans to promote entertainment and retail around the 19th Street BART station. Built on a former parking lot half a block from the transit stop, 2016 Telegraph Avenue is capturing the market of affluent techies and families by public transportation without displacing existing homes. 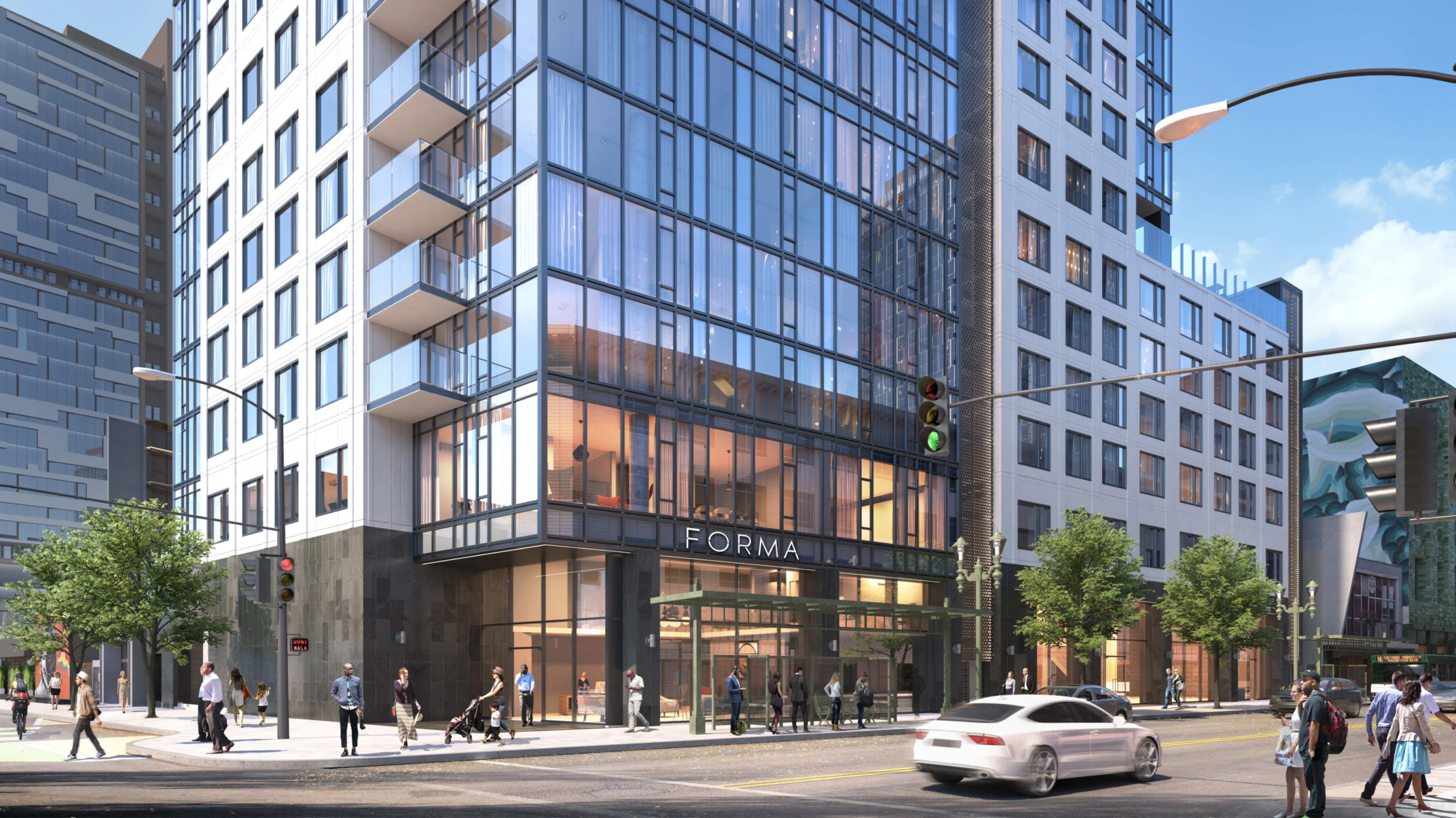 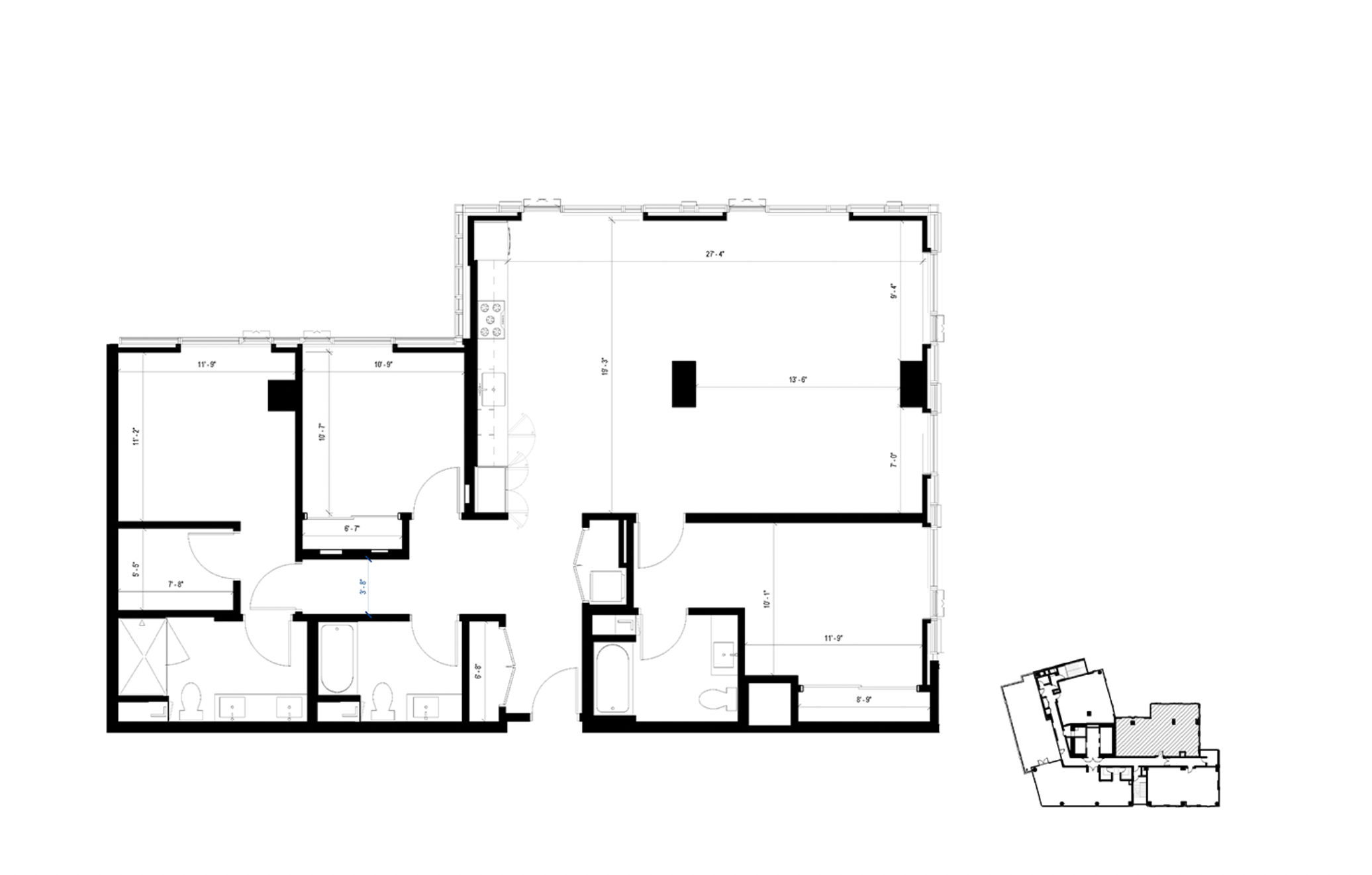 Promotional material for Forma pitches it as “an apartment community centered in one of the world’s most prolific art scenes; a direct extension of the vibrancy that lies just beyond the front doors.” Units are expected to be available by late March. For more on available units, see the project website here. 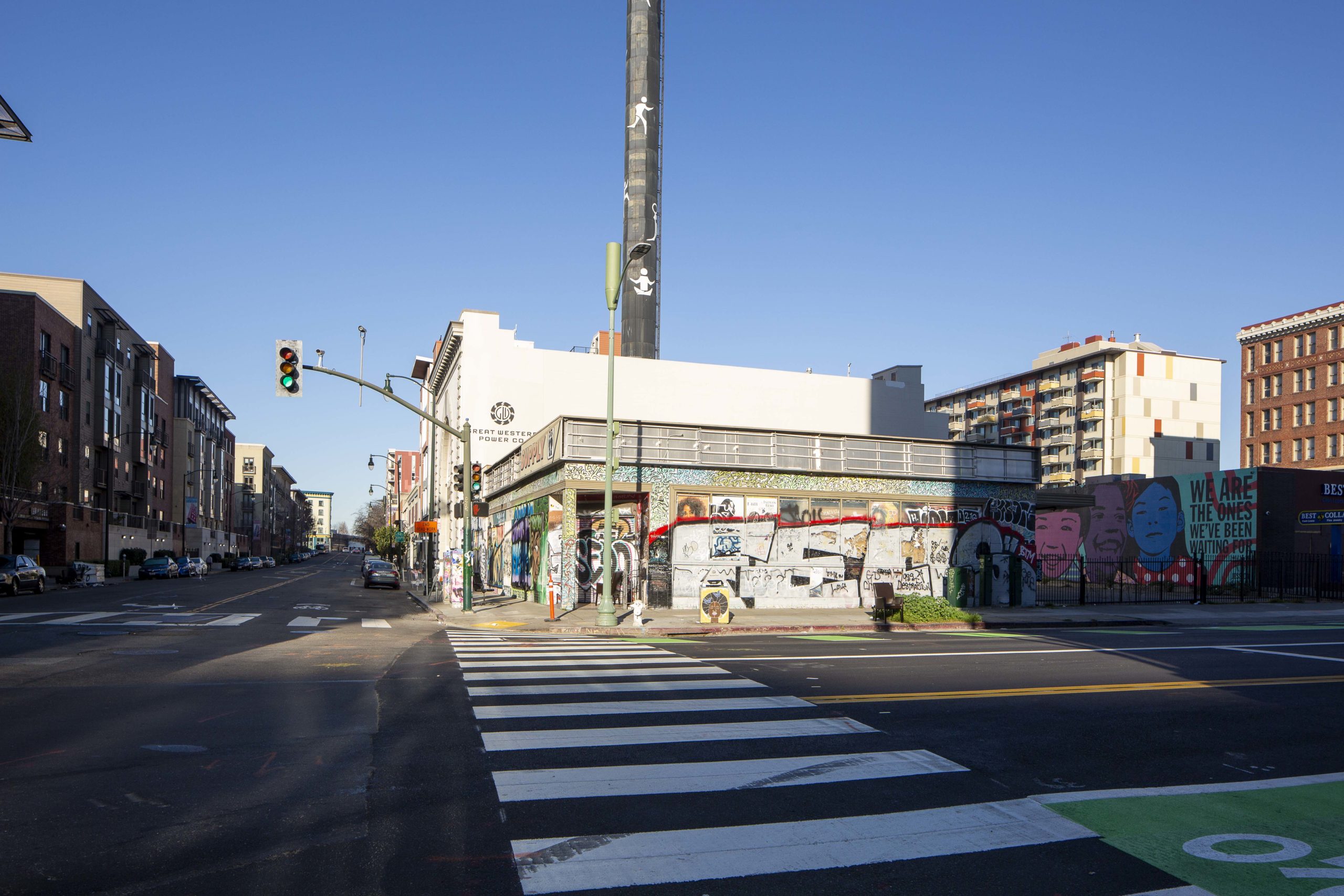 Demolition has not started yet for the project’s second shorter tower at 2015 Telegraph Avenue. We last reported that foundation permits were filed for the project in November 2021, revealing the plans will now be managed by the X Company, a Chicago-based co-working real estate developer. Construction is expected to start this year.

Be the first to comment on "Construction Wrapping Up, Leasing Starts for 2016 Telegraph Avenue, Downtown Oakland"