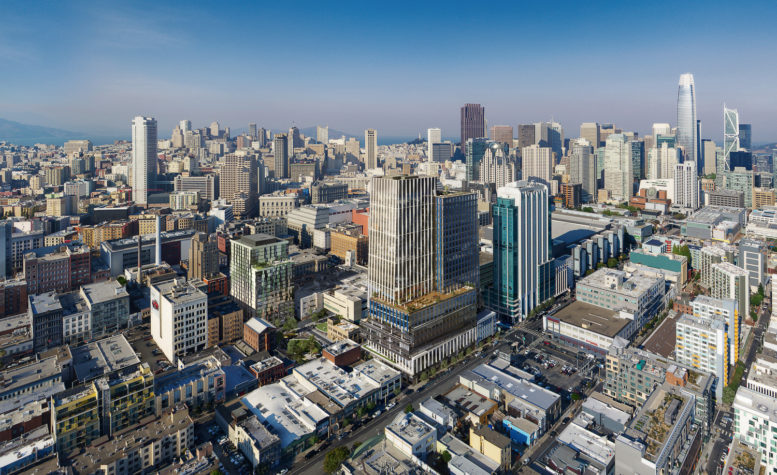 Brookfield’s 5M is officially open. The ribbon-cutting event was held yesterday, with San Francisco Mayor London Breed and other speakers in attendance. For over a decade, the project has been in the works to replace four acres of surface parking with the city’s newest office tower, a 302-unit apartment complex, a park, and adaptive reuse of historic buildings. 5M, named for the adjacent intersection of 5th and Mission Street in SoMa, is a joint development with Brookfield and Hearst.

At the event, Mayor Breed expressed joy at the project’s opening, sharing that “from affordable housing to new outdoor space and cultural programming, this community-led project addresses a wide range of neighborhood needs that for too long have been neglected. I want to thank Brookfield Properties and the entire SoMa community for their continued work and commitment to the future of this neighborhood.” 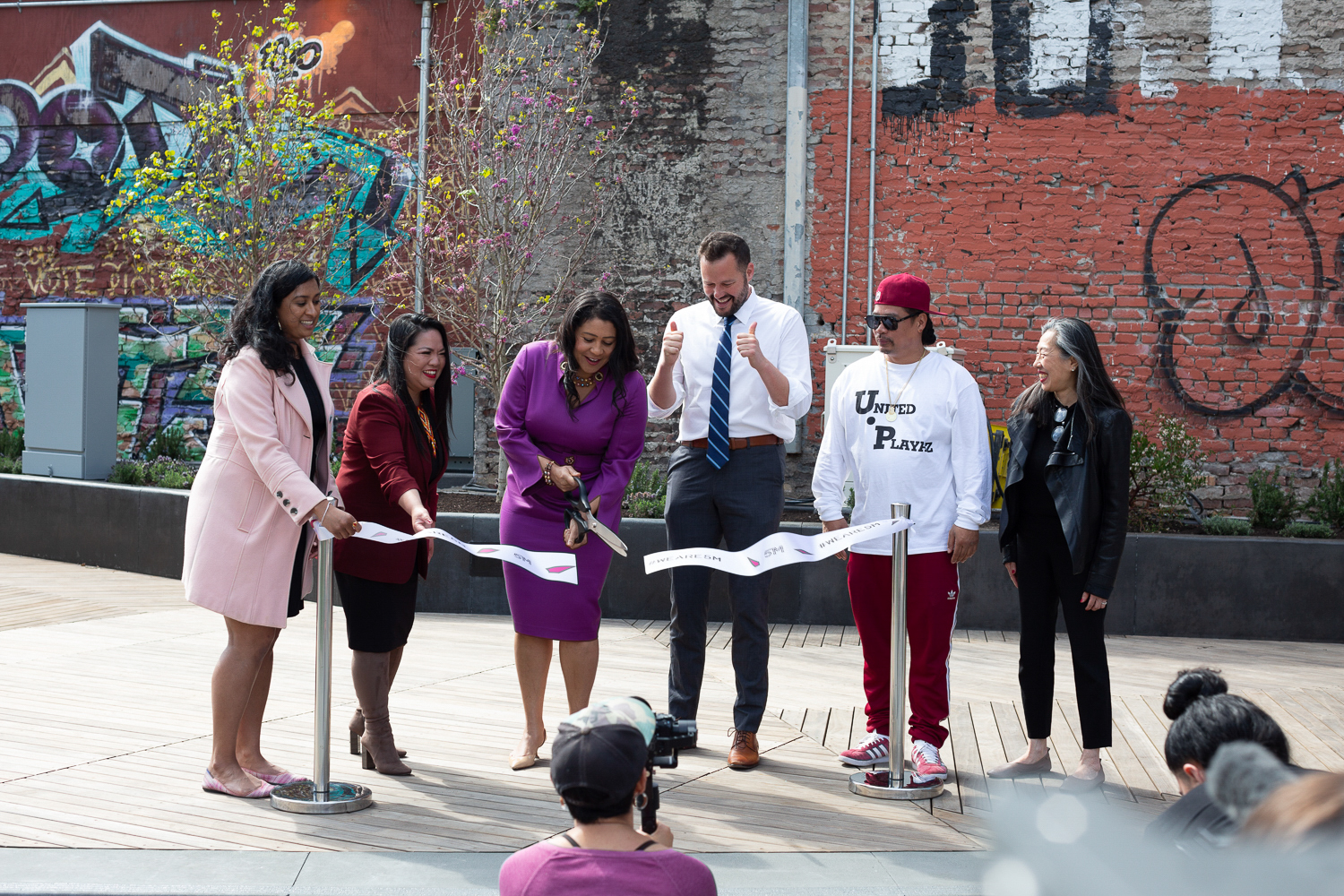 Among the community benefits that Brookfield can boast is more than $76 million dedicated to the public, aided by the 5M Community Advisory Committee of residents, nonprofits, and local businesses. Funding has also been given to the Old Mint, across the street from the Chronicle building. The adaptively reused historic Dempster Building at 447 Minna Street has been donated by Brookfield to Community Arts Stabilization Trust, i.e., CAST, for the institution’s programs with arts, culture, and education. The property is a new home for PUSH Dance Co, which performed at the beginning of the event, and Women’s Audio Mission, both arts non-profits. 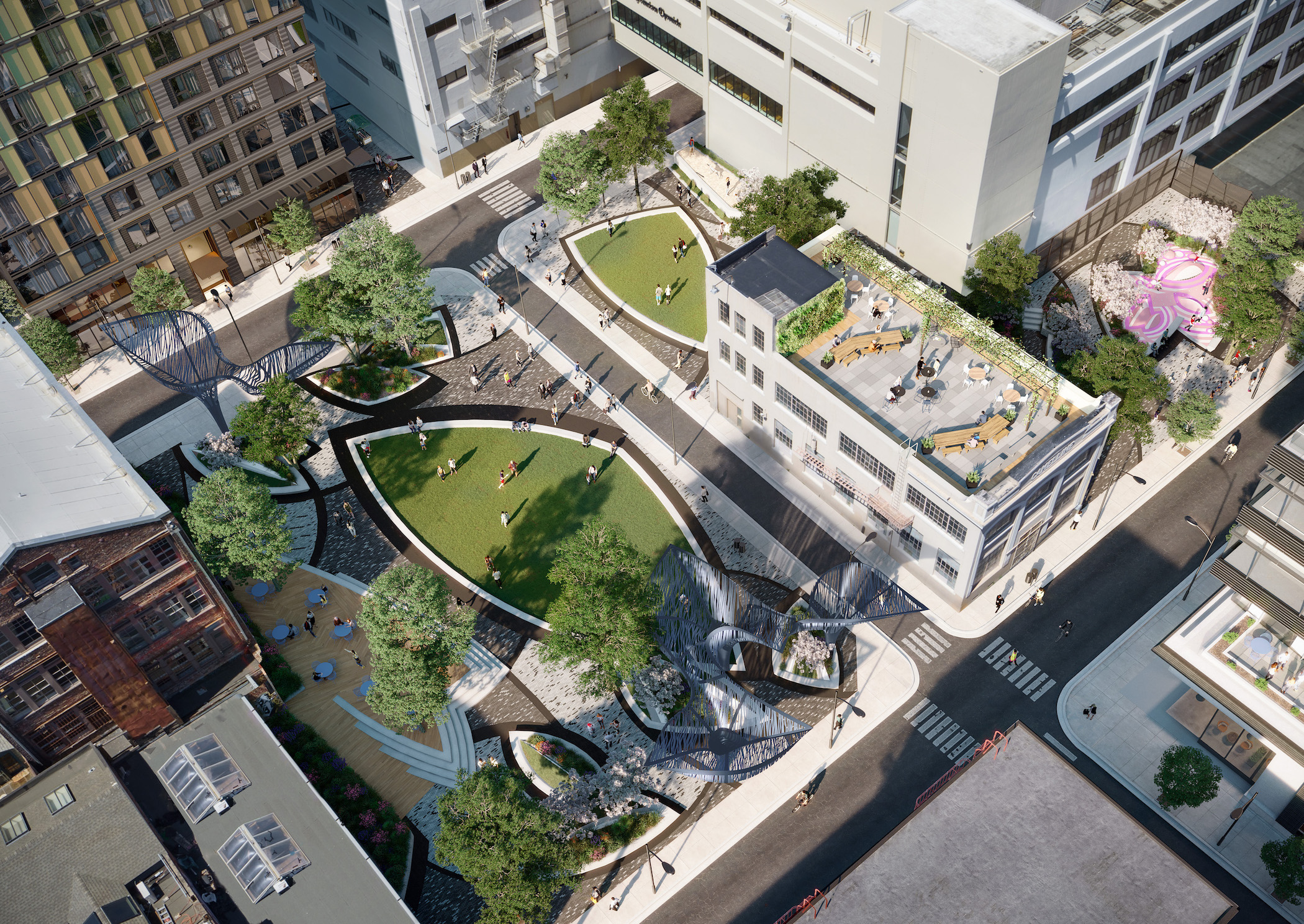 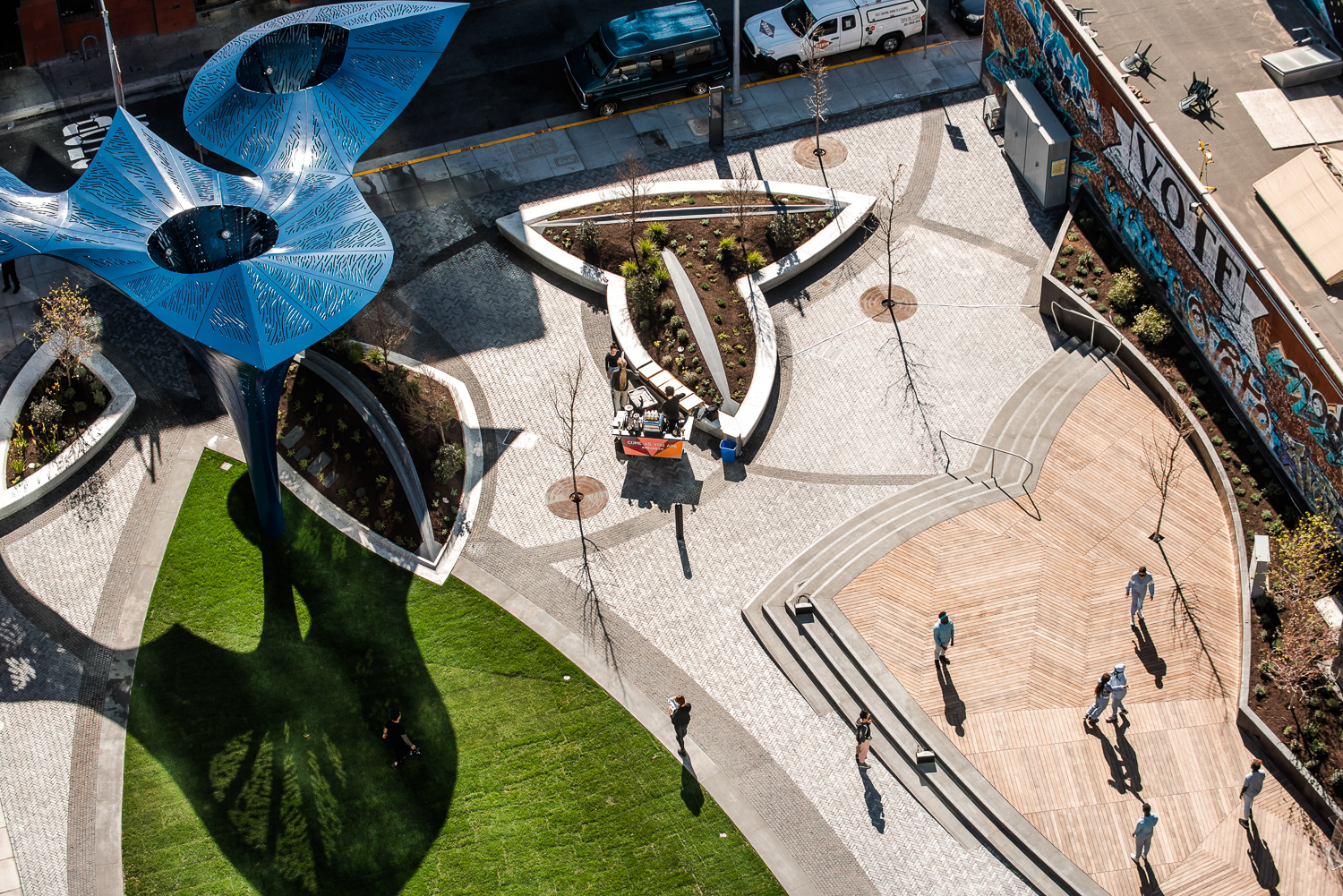 Additional money went to funds for the Arts and nonprofit endowment, local neighborhood organizations, and programming for Bessie Carmichael. Infrastructural improvements were made to increase pedestrian safety in the area, and the developer committed to the city’s First Source Hiring and Project Labor Agreement programs.

Highlighting this investment, the Senior Director for Development for Brookfield, Swathi Bonda, emphasized that “5M underscores our commitment to the neighborhood and our belief in how melding creativity, cultural arts, and commerce in unique ways builds stronger communities… It is a place that binds us together to relax, have fun, learn and work–grounded in programming for the arts, music, and cultural activities.”

What has opened today includes the office tower at 415 Natoma, The George at 434 Minna Street, Camelline, the Dempster building, and the public parks. While the components delivered by Brookfield have opened at 5M, next will be another residential tower and new offices by Hearst. Hearst is still expected to construct a 400-unit residential tower dubbed N1 and restore the old Chronicle building. 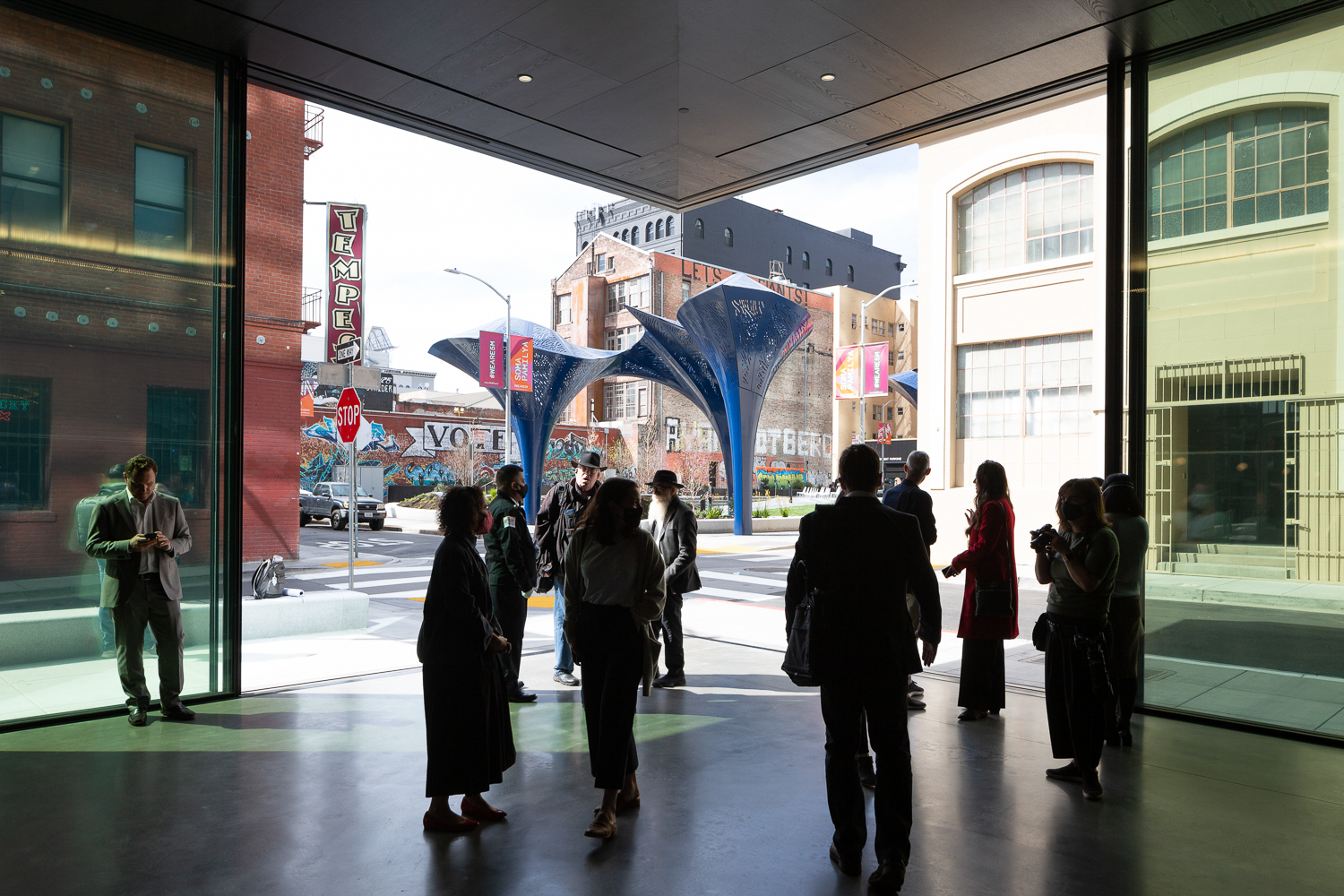 The Parks at 5M seen from the public entrance into 415 Natoma, image by Andrew Campbell Nelson

SITELAB Urban Studio is responsible for the project’s master plan. The firm came to the project with the mandate to cultivate the arts and neighborhood community, including with the Filipino Cultural Heritage District. The firm’s principal, Laura Crescimano, shared at the event that “5M is inspired by SoMa and its network of alleys, 5M’s design weaves together a tapestry of neighborhood history, arts, and business with new public space at the center.”

At the heart of the project is The Parks at 5M, formerly known as Mary Court East and West. Spanning 26,100 square feet, The Parks is the city’s largest ground-level privately owned public open space. The $20 million POPOS, which Brookfield will provide with 24/7 security, includes landscaped knolls, a performance space, a children’s playground, a dog run, and two 30-foot tall steel canopies that act as shading and a wind dampener. 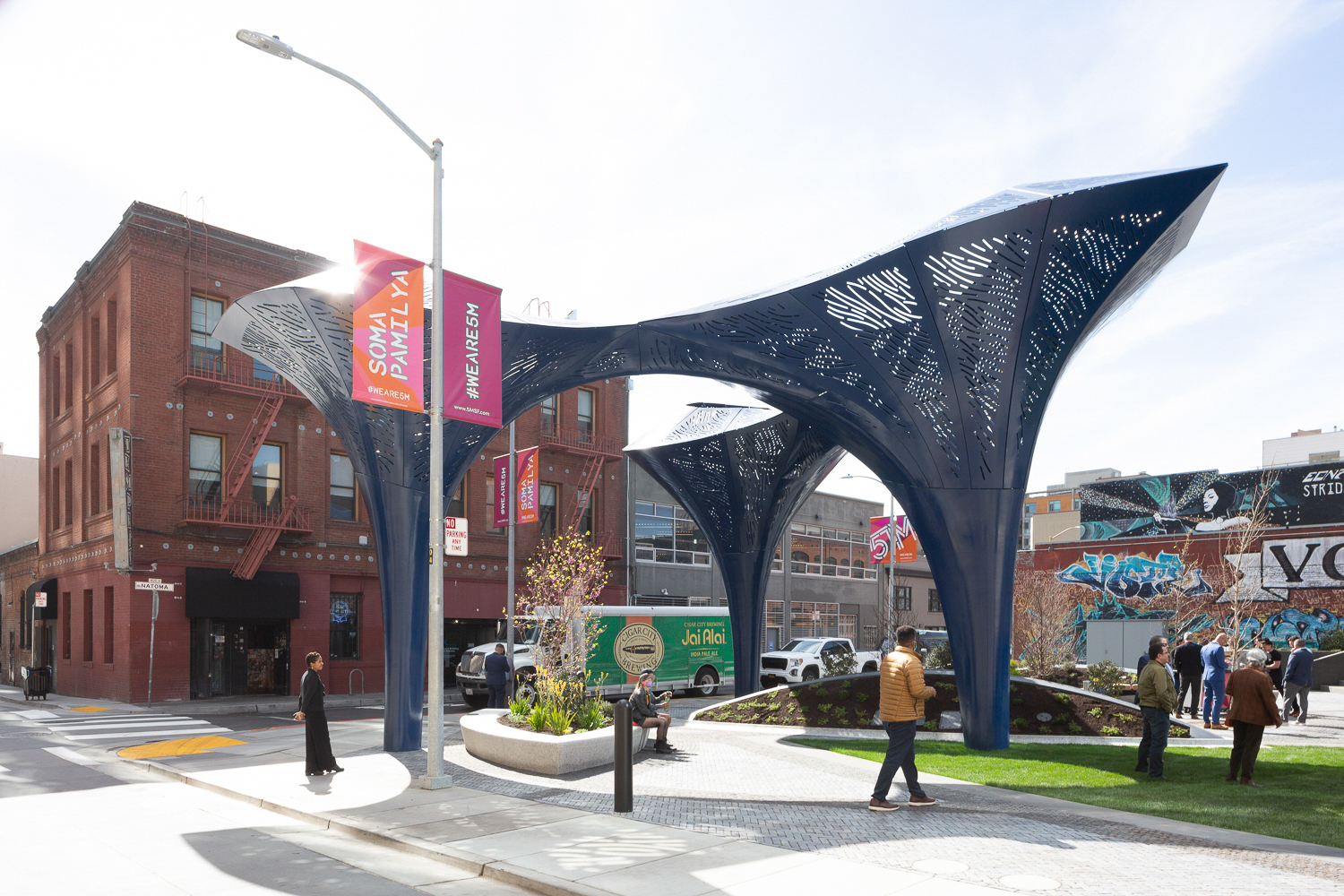 30-foot tall structures in The Parks at 5M, image by Andrew Campbell Nelson

The park also serves as a prime focal point for the new buildings, with a door directly into The George’s public lobby and a massive corner-building entrance into the interior lobby of 415 Natoma, another POPOS space. !melk and Cliff Lowe Associates are the landscape architects.

“The Parks at 5M help fulfill a civic need for more open spaces in the neighborhood for residents to play, socialize and celebrate,” said San Francisco Supervisor Matt Haney, who represents the neighborhood around 5M. “The diversity of offerings and opportunities here created a special place that benefits people of all ages and backgrounds.”

The pinnacle for the project is indeed the office tower, 415 Natoma. The 25-story building stretched 395 feet tall to yield 640,000 square feet of rentable office space and a public open space lobby connecting to the Parks. The building also included parking for 122 cars and 140 bicycles. 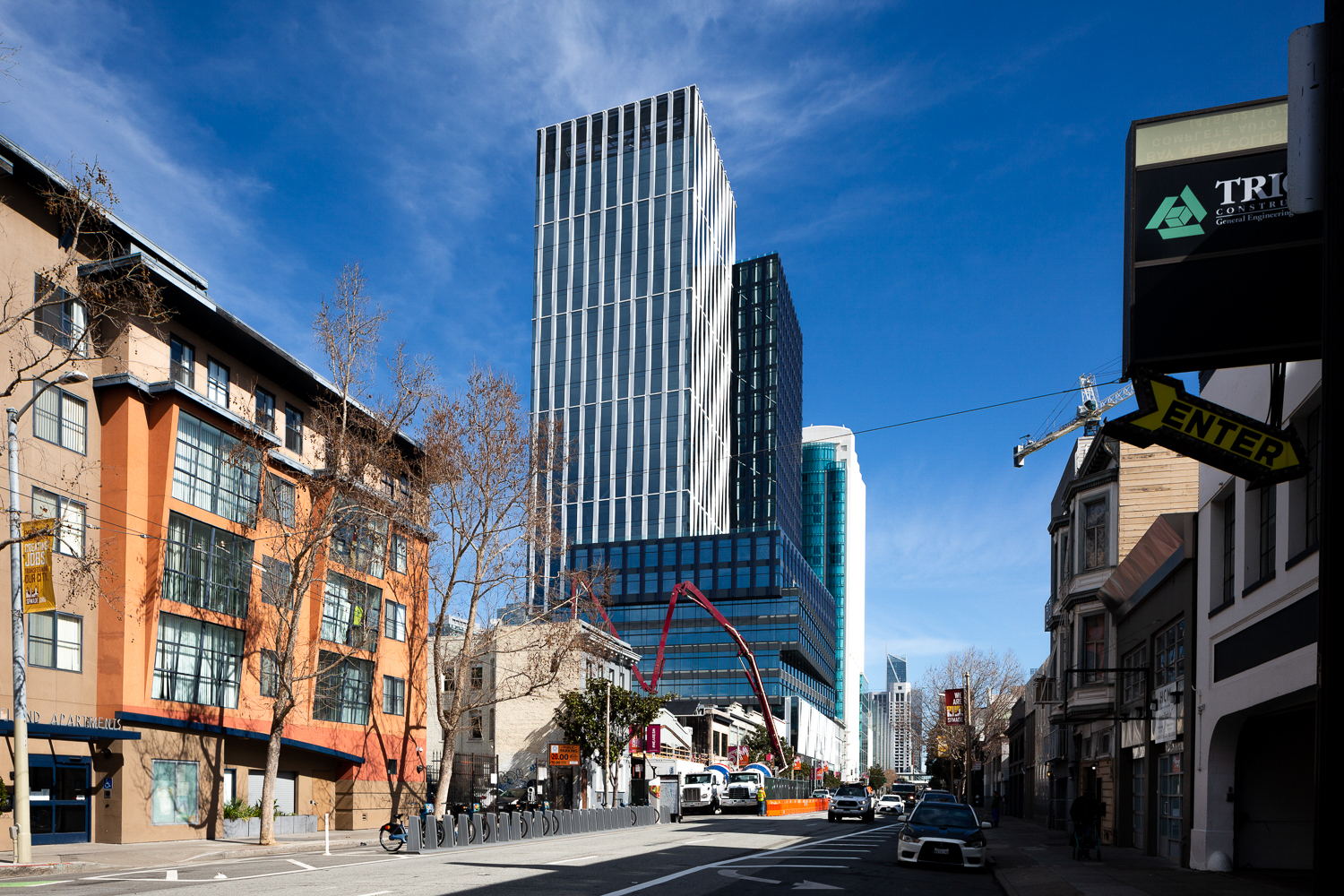 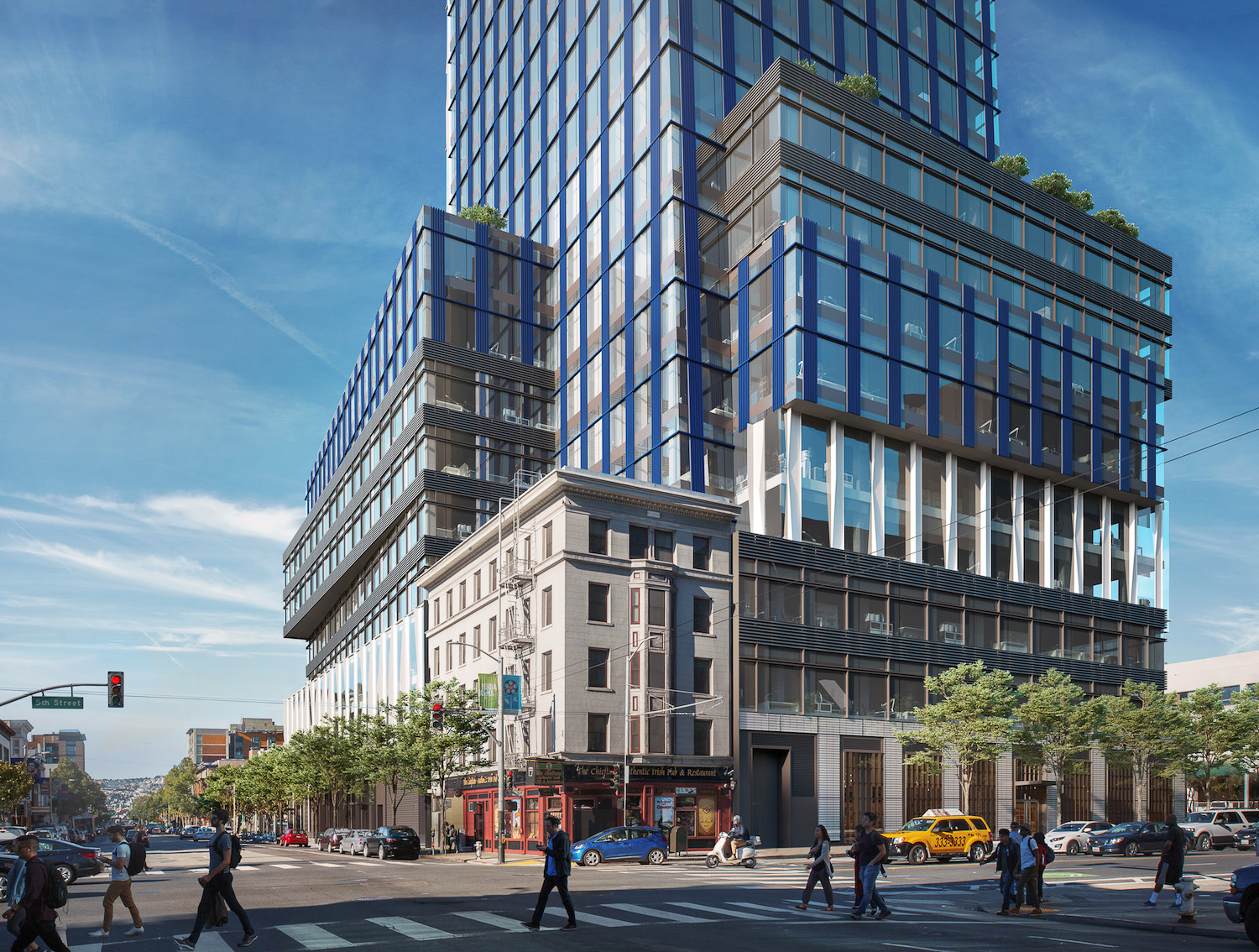 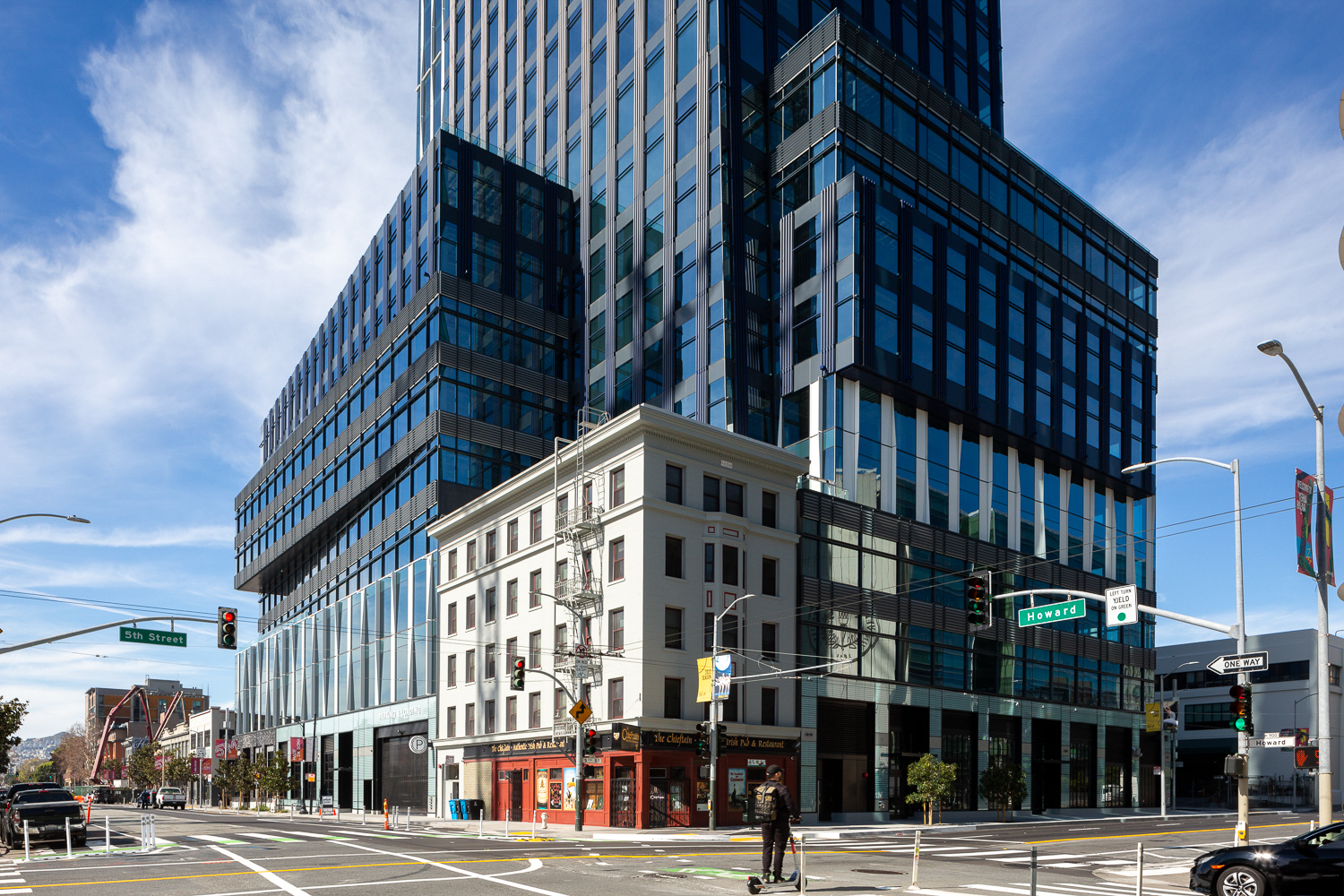 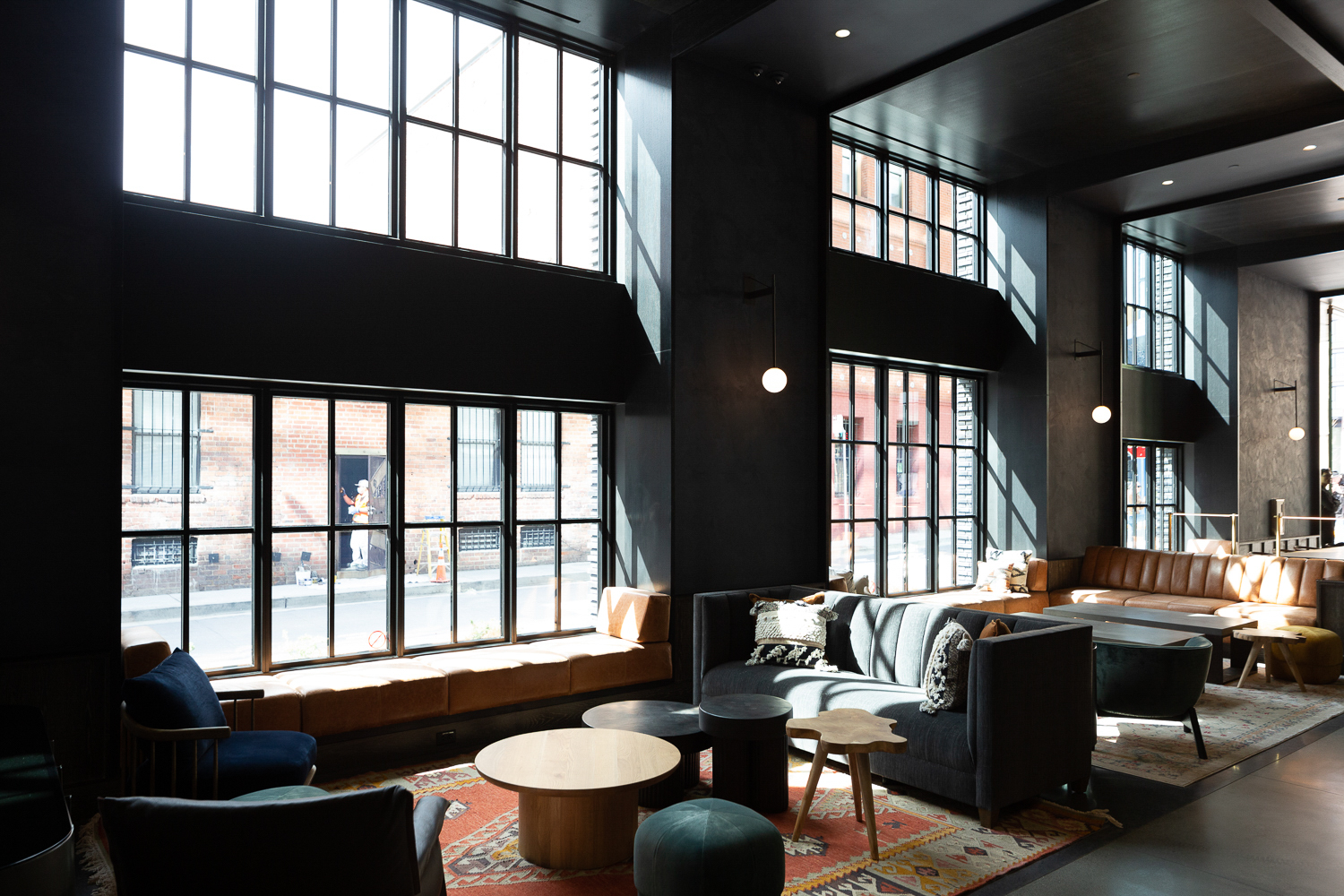 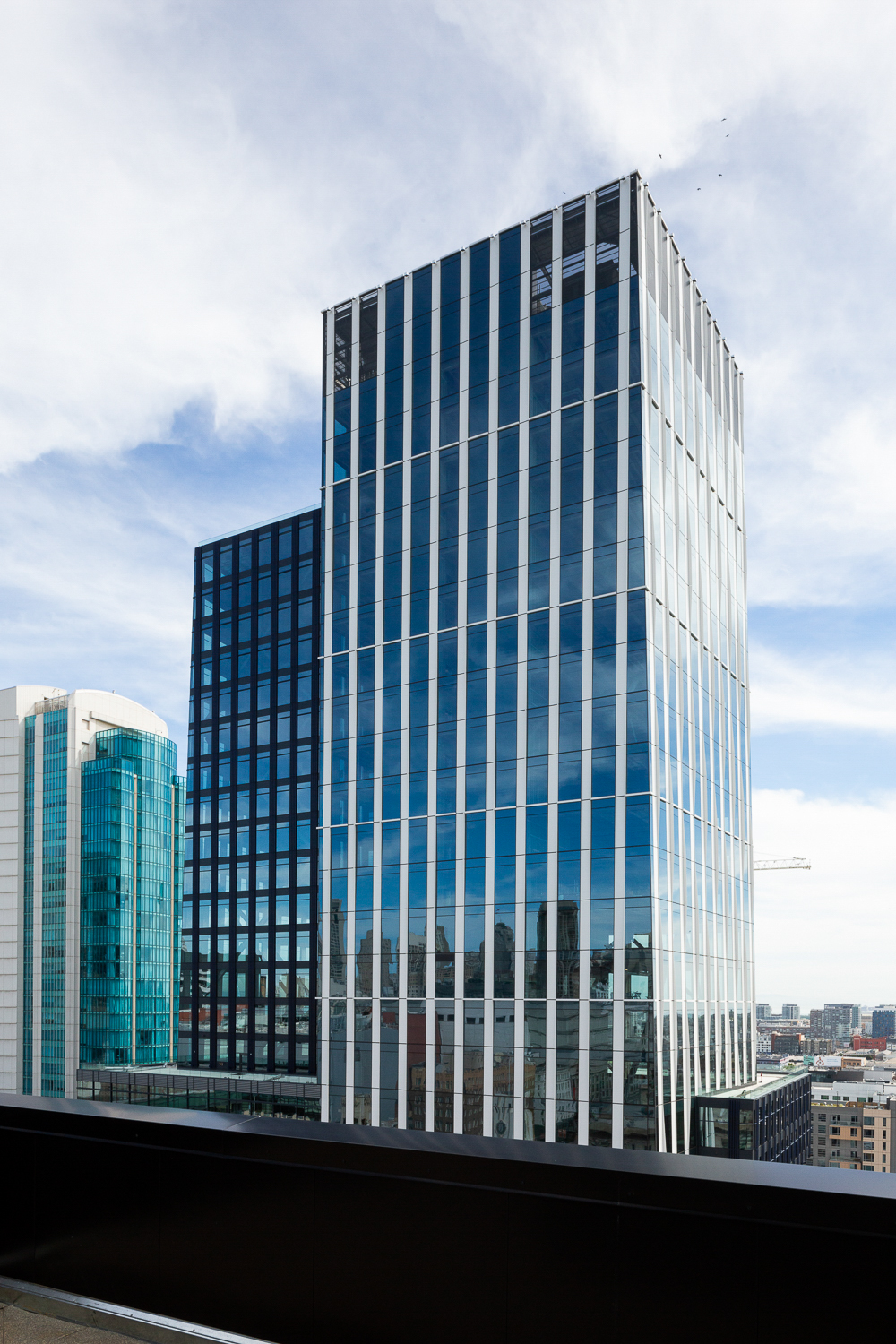 415 Natoma as seen from The George, image by Andrew Campbell Nelson

The Grand Opening comes on the heels of good news for 415 Natoma, the 25-story office tower designed by Kohn Pedersen Fox and House & Robertson Architects. Brookfield Properties announced in mid-February that Thumbtack, the company running a home services website, is leasing a full floor in the new office building.

Cutter MacLeod, Director, Asset Management for the Bay Area at Brookfield Properties, commented that “Thumbtack has been a fixture in SoMa since its inception in 2008, and we’re excited that 415 Natoma can provide them with all of the ingredients necessary to make a modern, healthy space for their team members to thrive.” 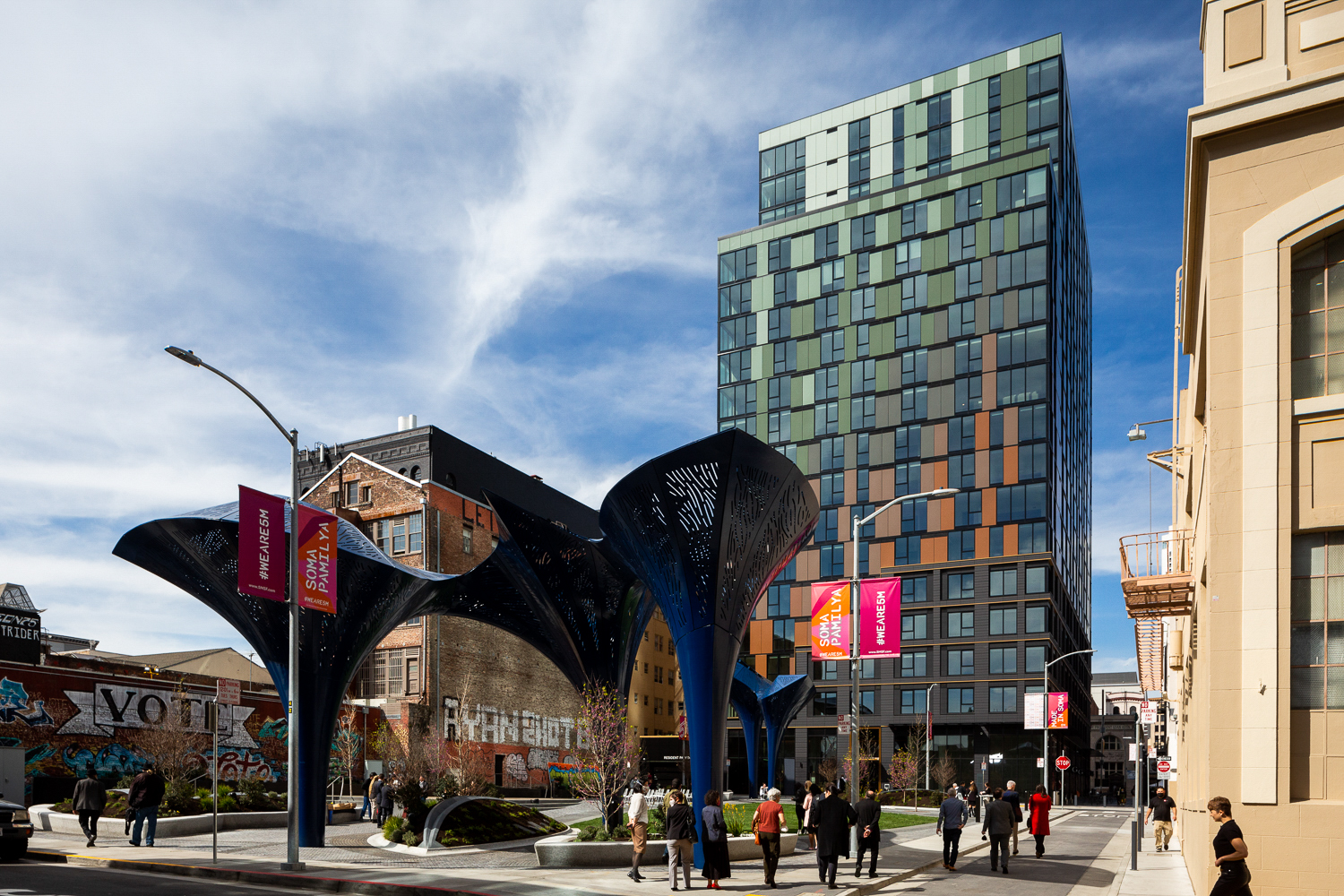 The George as seen from The Parks at 5M, image by Andrew Campbell Nelson 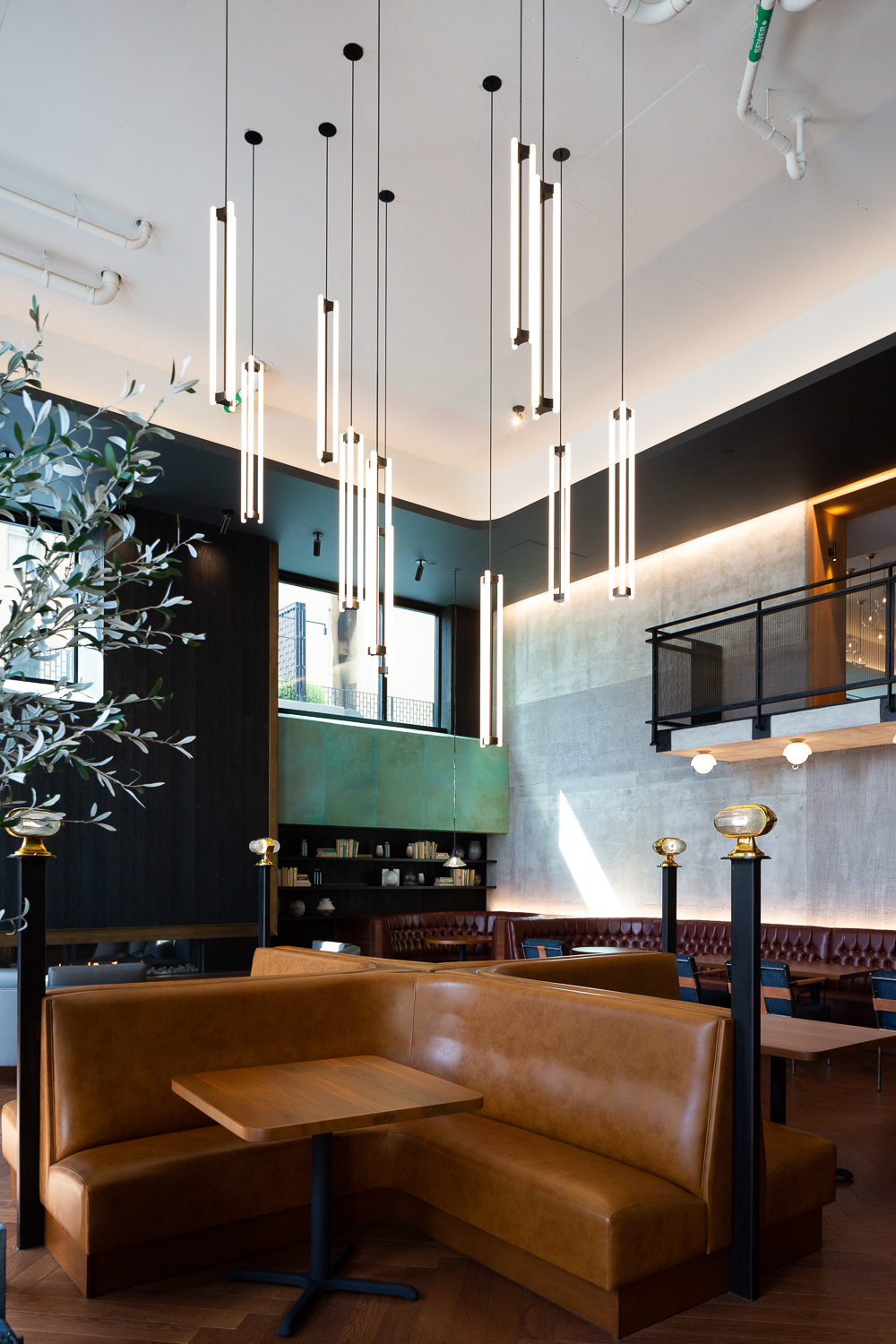 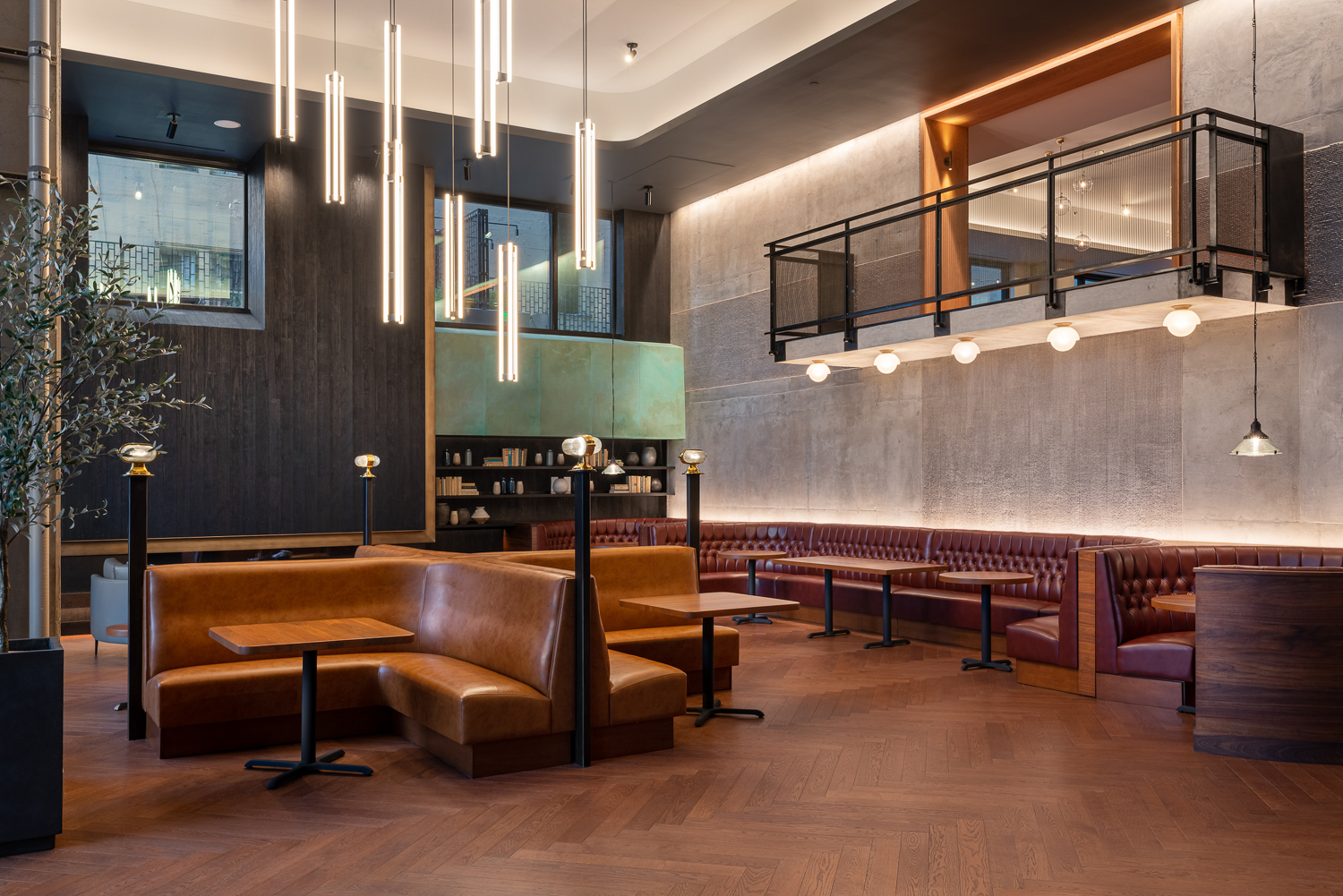 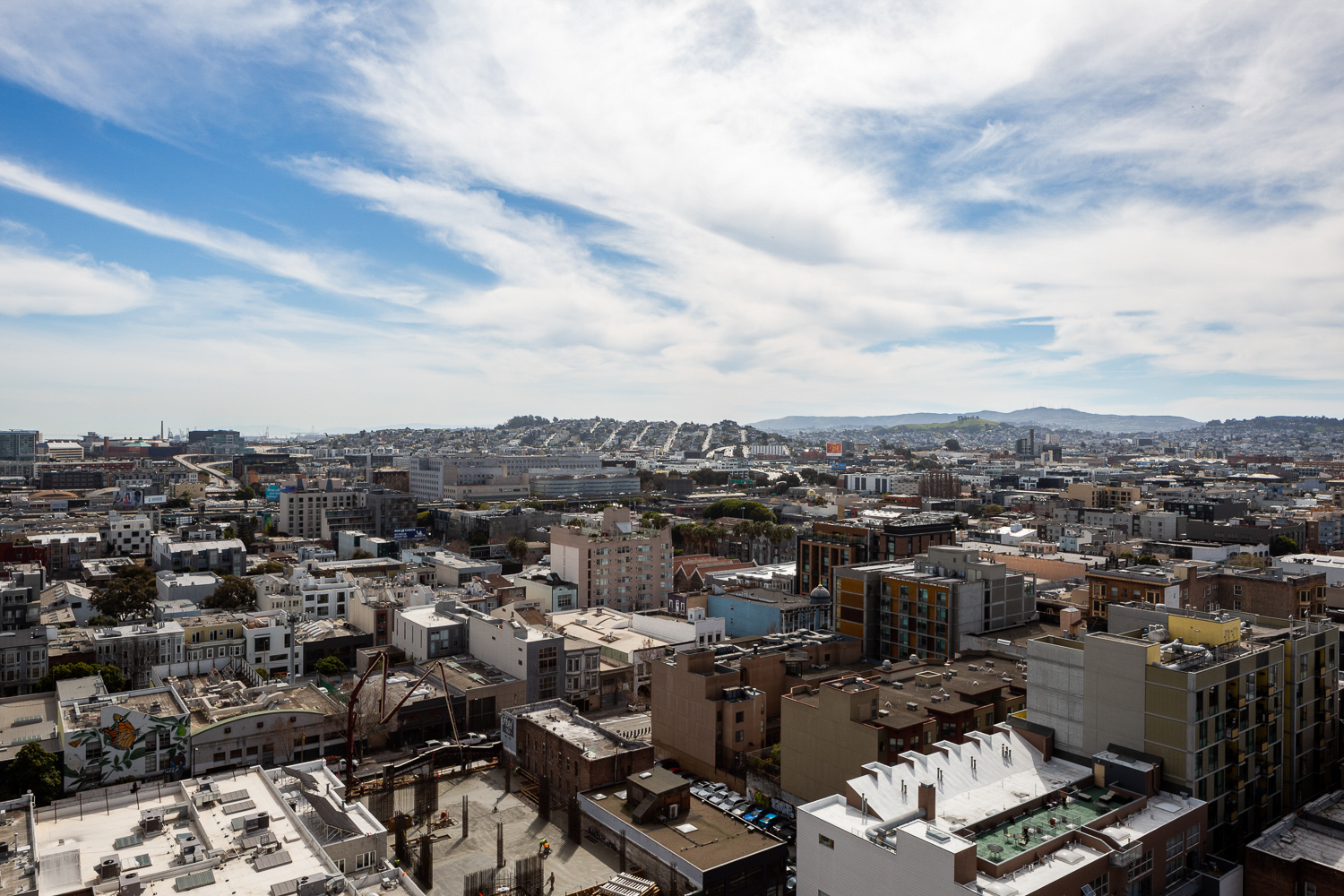 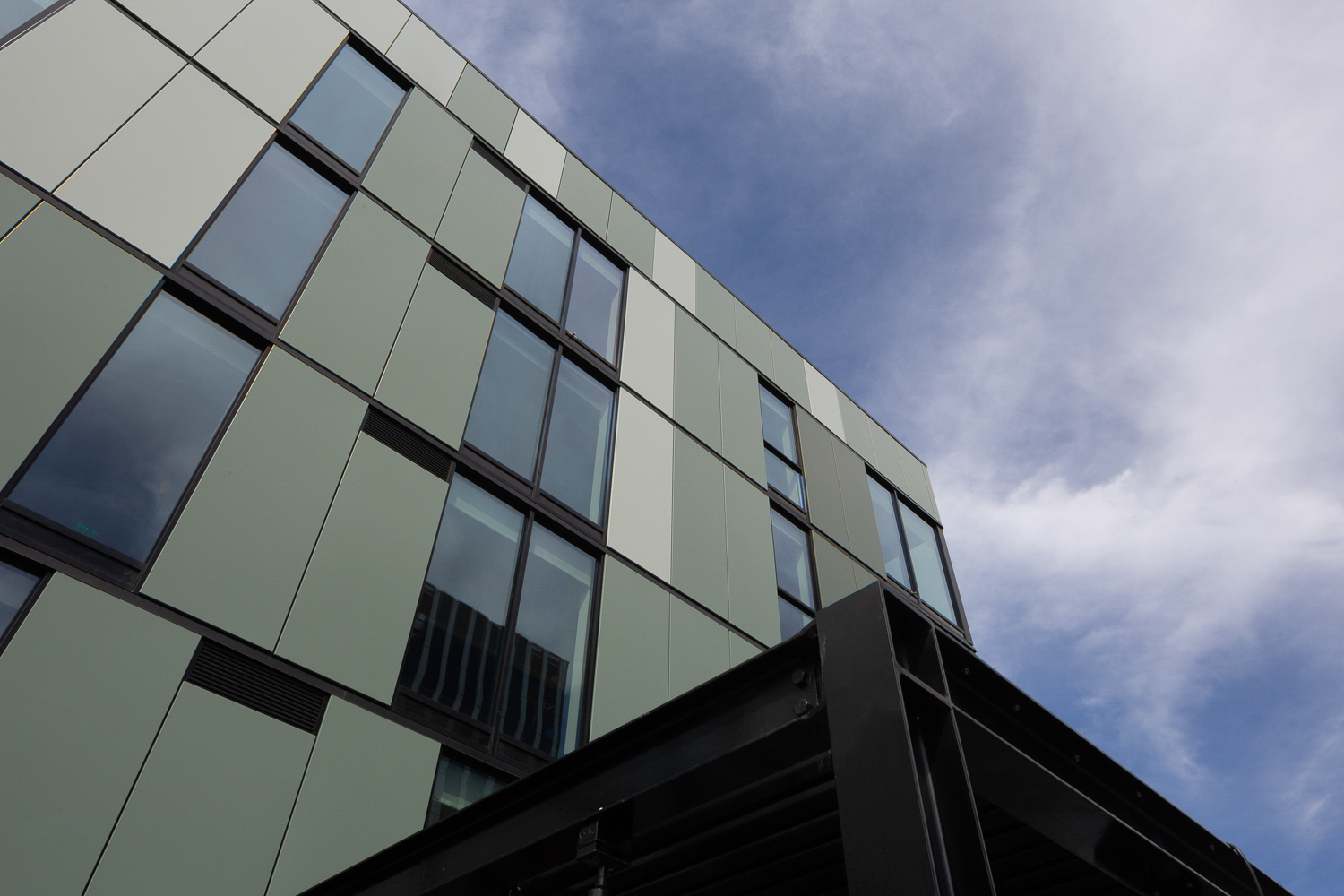 The structure includes 302 units, of which 211 are being leased at market rate, and 91 as affordable housing for middle-income households earning between 100-150% of the Area Median Income. Project amenities will include a 16th-floor clubroom, fitness center, resident’s bar, lounge, private event space, and artwork by local women, BIPOC artists, and other artists.

Ankrom Moisan Architects is responsible for the design. The facade includes a mix of windows and colored panels, mimicking the gradient of oxidizing copper. Beside the tower is North Mary Street, a new pedestrian-only paseo with outdoor seating available beside space for a new cafe and 4,600 square feet of retail.

According to Brookfield, “the George derives its name from the boutique Hotel George that welcomed guests since the 1930s, and is now today the Chieftain Building.” Leasing has already started, with prices for the publicly available apartments now rent for between $2,675 to $5,785 per month. Unit sizes range from 387 to 1,052 square feet each. 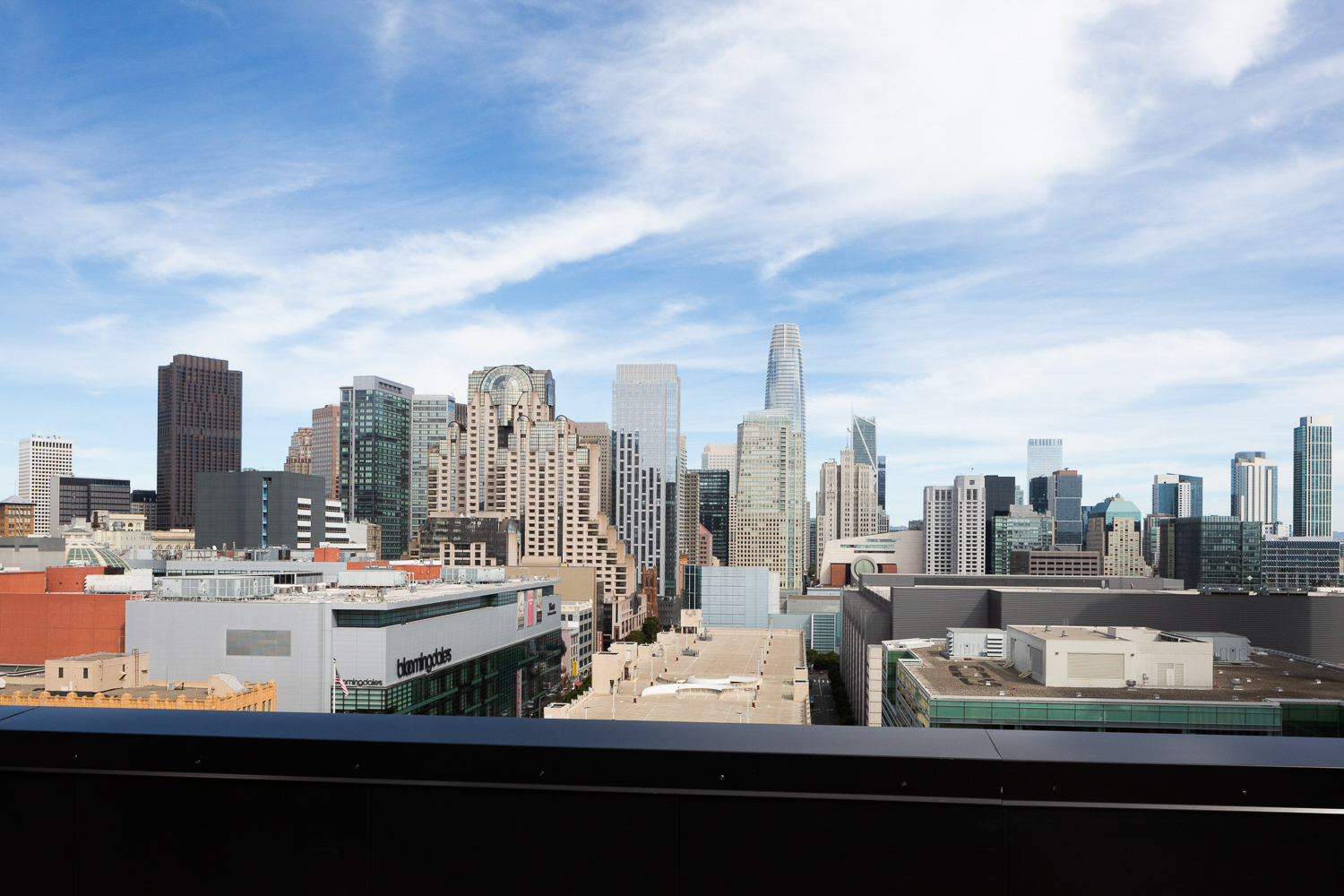 Brookfield’s 5M development components created 1,200 construction jobs and have opened the capacity for 4,100 new jobs with offices, retail, and other space. In the immediate area, construction is moving ahead for 921 Howard Street and 960 Howard Street, adding more new housing to the city aided by state density laws.