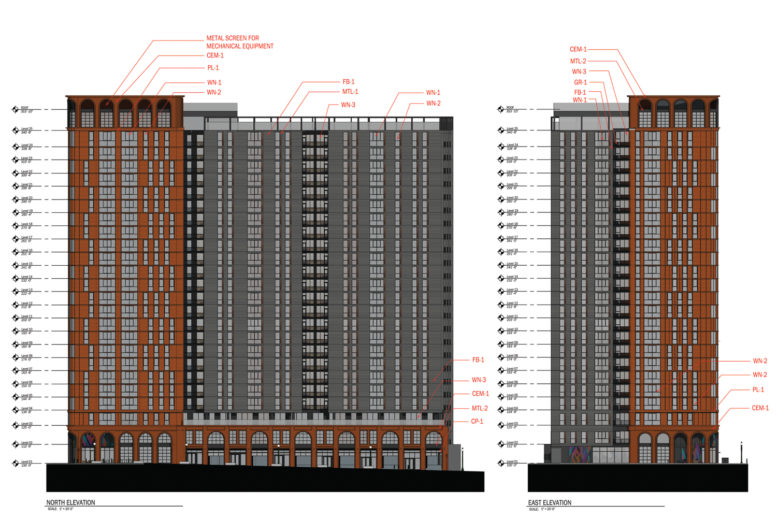 Increased plans have been filed for The Hub, the mixed-use tower at 2128 Oxford Street in Downtown Berkeley, Alameda County. The application has nearly doubled in residential capacity while the height has been raised from 17 to 25 floors tall. On top, a rooftop bar and restaurant will offer commanding views of the surrounding region and, potentially, two more similarly-tall buildings. Core Spaces is the developer.

The roughly 260-foot tall structure will yield over 665,000 square feet, with 650,500 square feet for residential use and 15,800 square feet for commercial retail. Inside, the building will feature 551 apartments, of which 49 would be restricted as affordable housing. 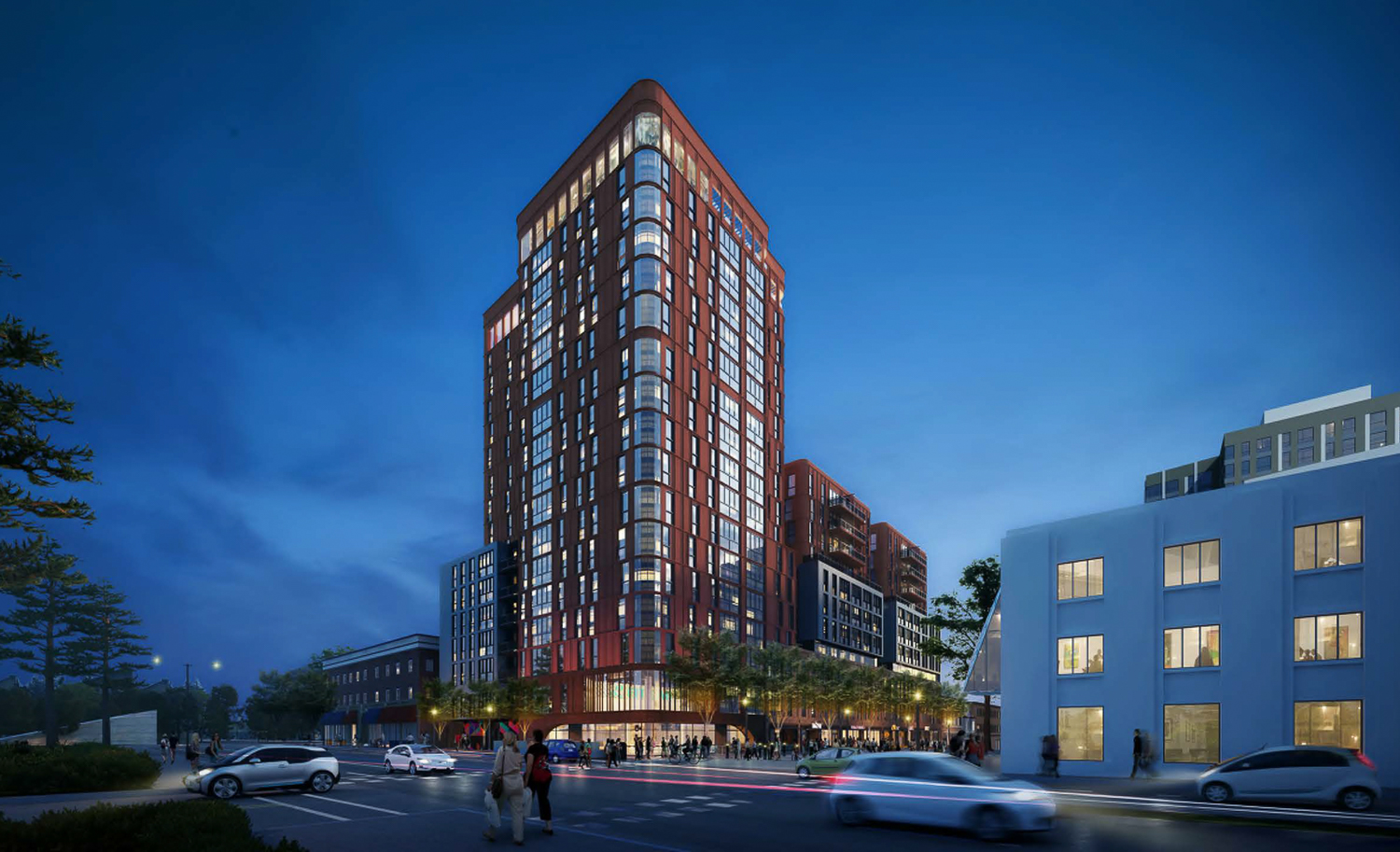 DLR Group is the architect. Facade elevations provide new insight into the proposed design. The building will sit on an articulated floor plan that maximizes light exposure for units while creating a more dynamic exterior. The overall massing has been increased to a level height, with a tower implied by reddish cementitious panels and a rounded corner overlooking Center and Oxford Street. Facade materials will include cementitious finish exterior panels, plaster, bronze and black metal panels, and brick veneer.

The elevations published this week by the Berkeley Planning Department from DLR Group and Core Spaces provide a two-dimensional perspective on the project. The future final design is likely to include greater detail and design features similar to what was first published by the project team. 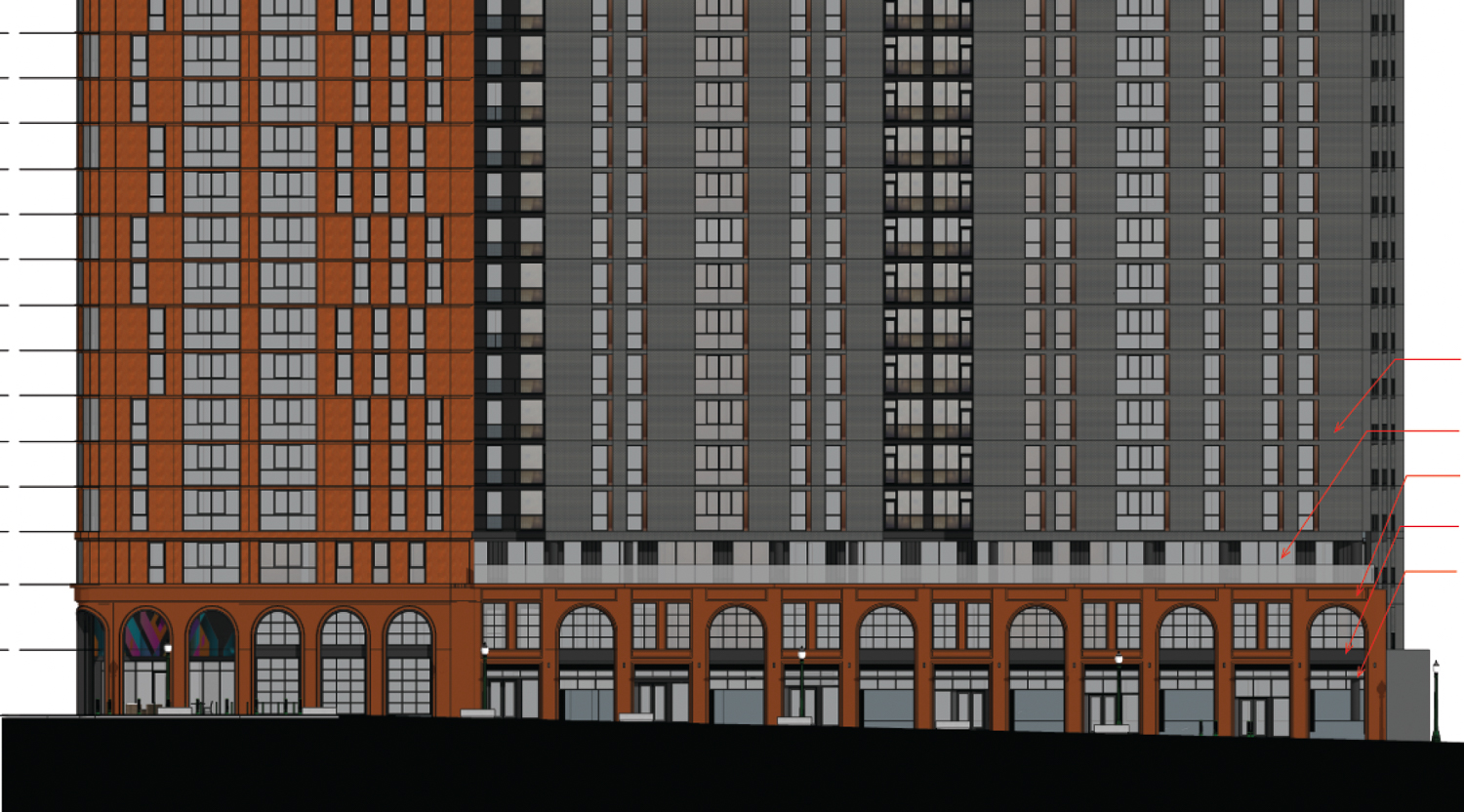 The lot is at the corner of Center Street and Oxford Street, half a block from the Downtown Berkeley BART Station entry intersection where Berkeley’s current three tallest buildings stand. These are the 186-foot SkyDeck, the 176-foot Wells Fargo Building, and the 168-foot Residence Inn by Marriott at 2129 Shattuck Avenue.

Adjacent to SkyDeck at the corner of Shattuck and Allston, PGIM plans to build 2190 Shattuck Avenue, another residential tower whose height bumped up to 260 feet this year. The Trachtenberg Architects-designed tower aims to create 326 new homes. 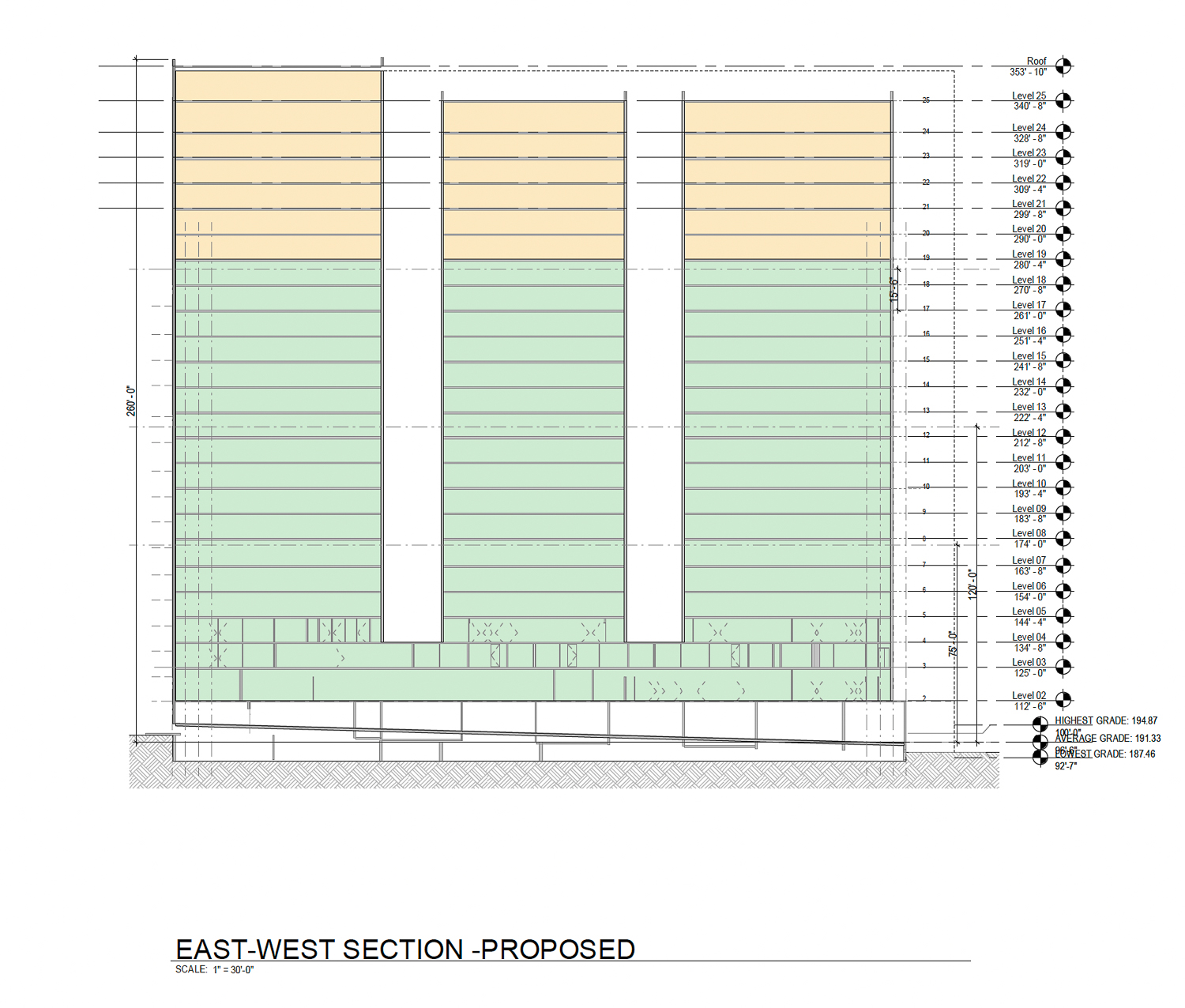 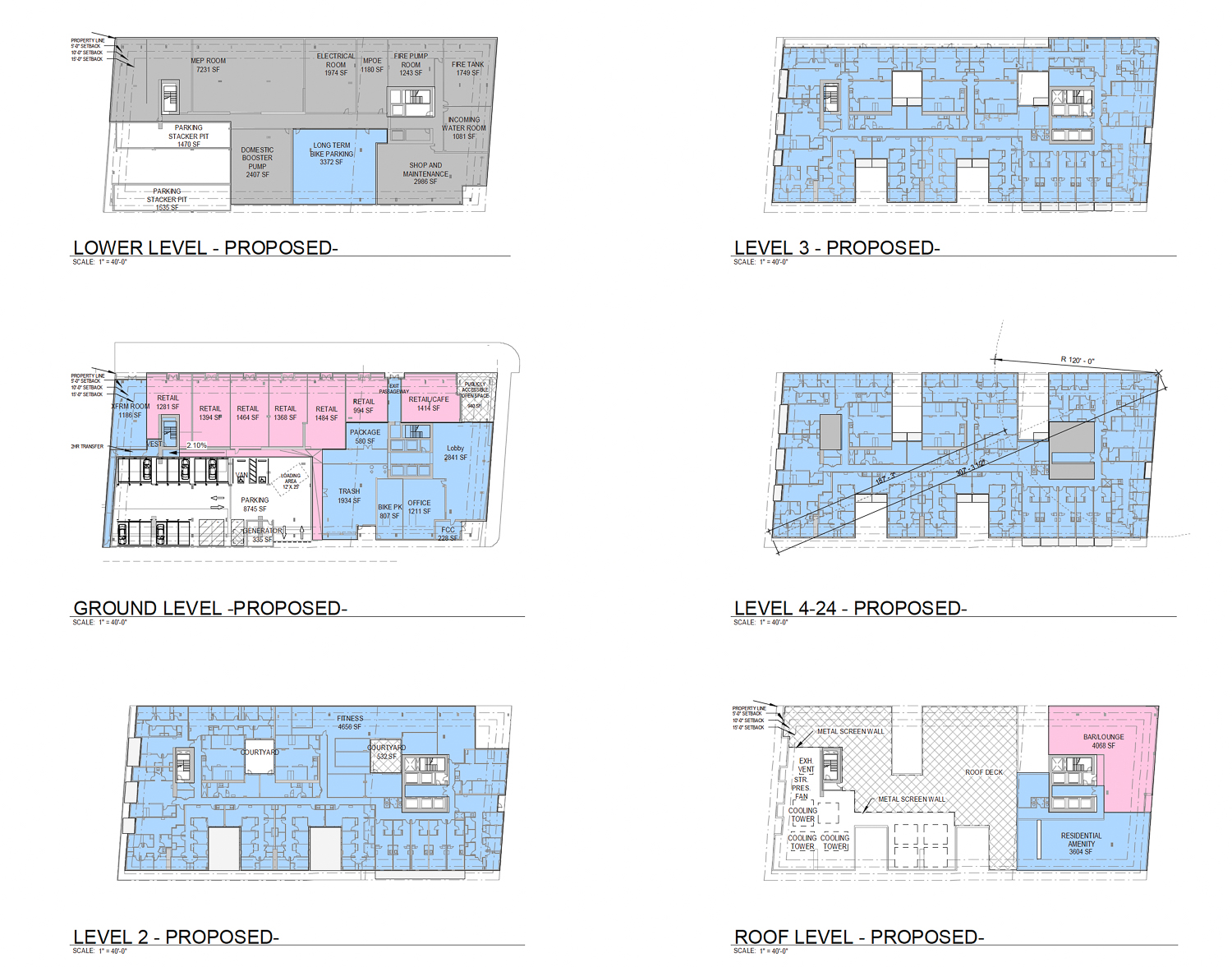 Plans for the tallest proposed building for Berkeley were revealed, with renderings published yesterday. 1974 Shattuck Avenue is poised to rise 277 feet tall, creating 297 homes from a small lot at the corner of Shattuck and University. The application is led by NX Ventures, Rhoades Planning Group, and Trachtenberg Architects.

The structure will include a sizable quantity of bicycle parking, a move that will promote public transit and reduce the city’s carbon footprint. Long-term residents parking will be included for 550 bicycles, with 40 short-term residents spaces and ten short-term commercial bicycle spaces. Parking will be included for 44 cars in a size-efficient stacker pit accessible from ground level.

The commercial space will span six continuous commercial condos and a corner-spot space earmarked for a hypothetical cafe tenant. The rooftop is poised to feature an open-air deck connected to the residential amenities and a 4,070 square foot bar and lounge offering views across the city. A publicly accessible plaza will be opened on the property corner. 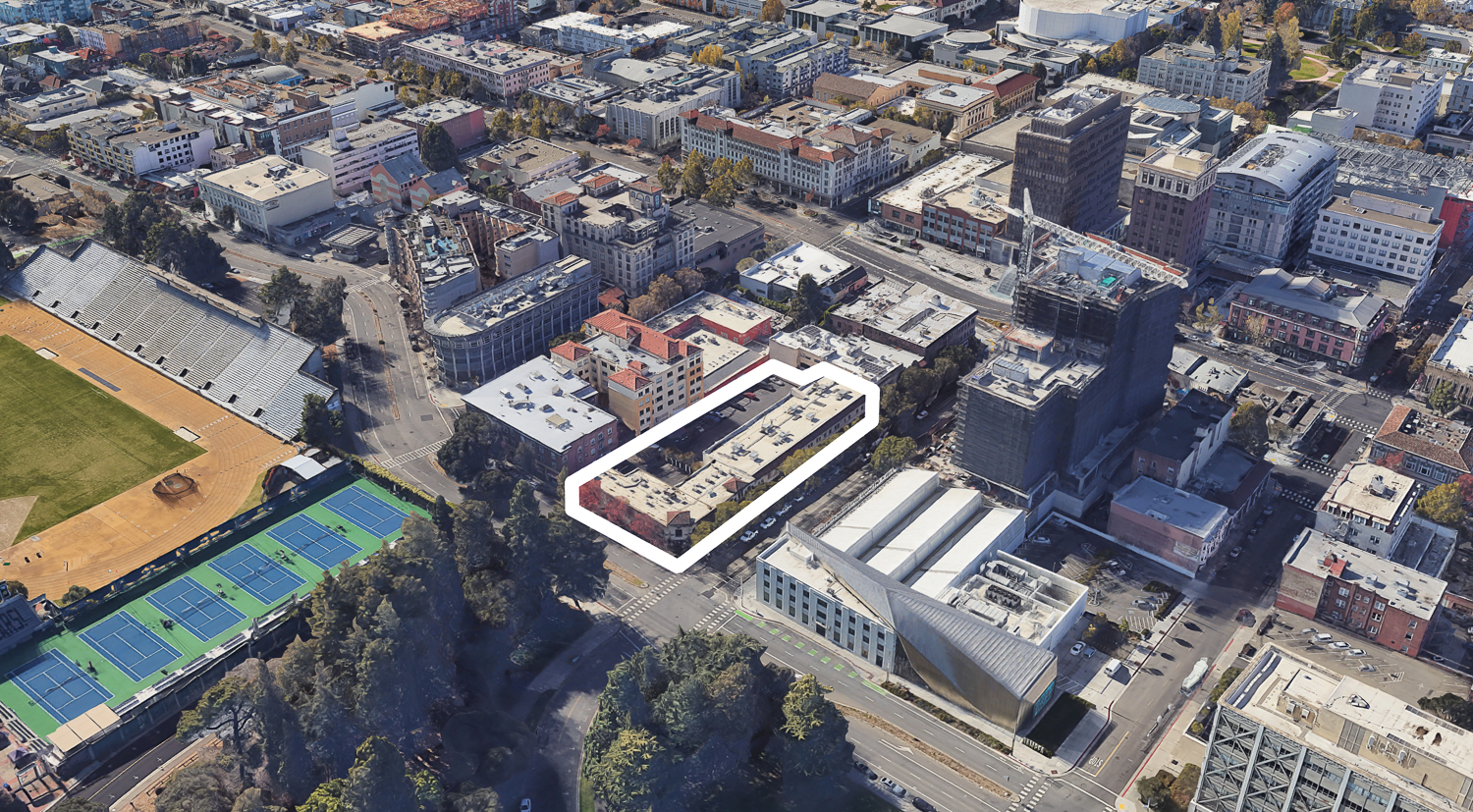 The application makes use of Senate Bill 330 for a streamlined approval process. Developers hope to qualify for the State Density Bonus program, which requires affordable housing in exchange for benefitial zoning waivers that increase residential capacity.

Rhoades Planning Group is managing land use, Site Design Group is responsible for the landscape architecture, and Kimley-Horn is consulting on civil engineering.

An estimated cost and timeline for construction have not yet been revealed. SFYIMBY has reached out to several members of the project team and has not received a comment as of the time of publication.