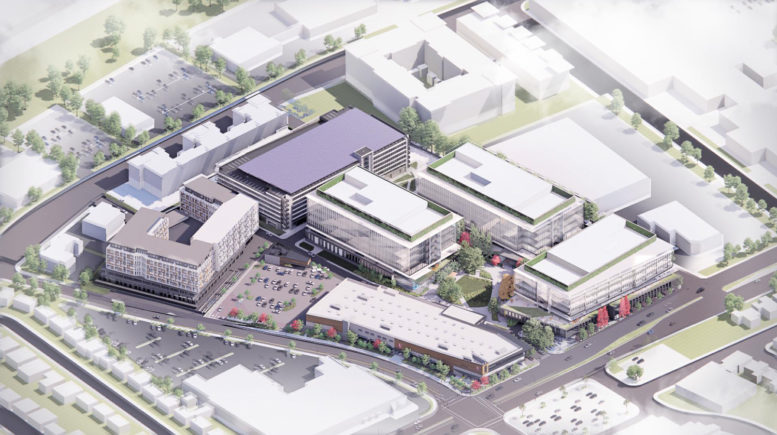 The South San Francisco Planning Commission is scheduled to vote today on plans for a three-parcel mixed-use development project at 180 El Camino Real, close to the San Bruno BART Station in San Mateo County. The proposal, phase two for the block, will create 183 new homes and 750,000 square feet for life sciences. Steelwave is the developer. 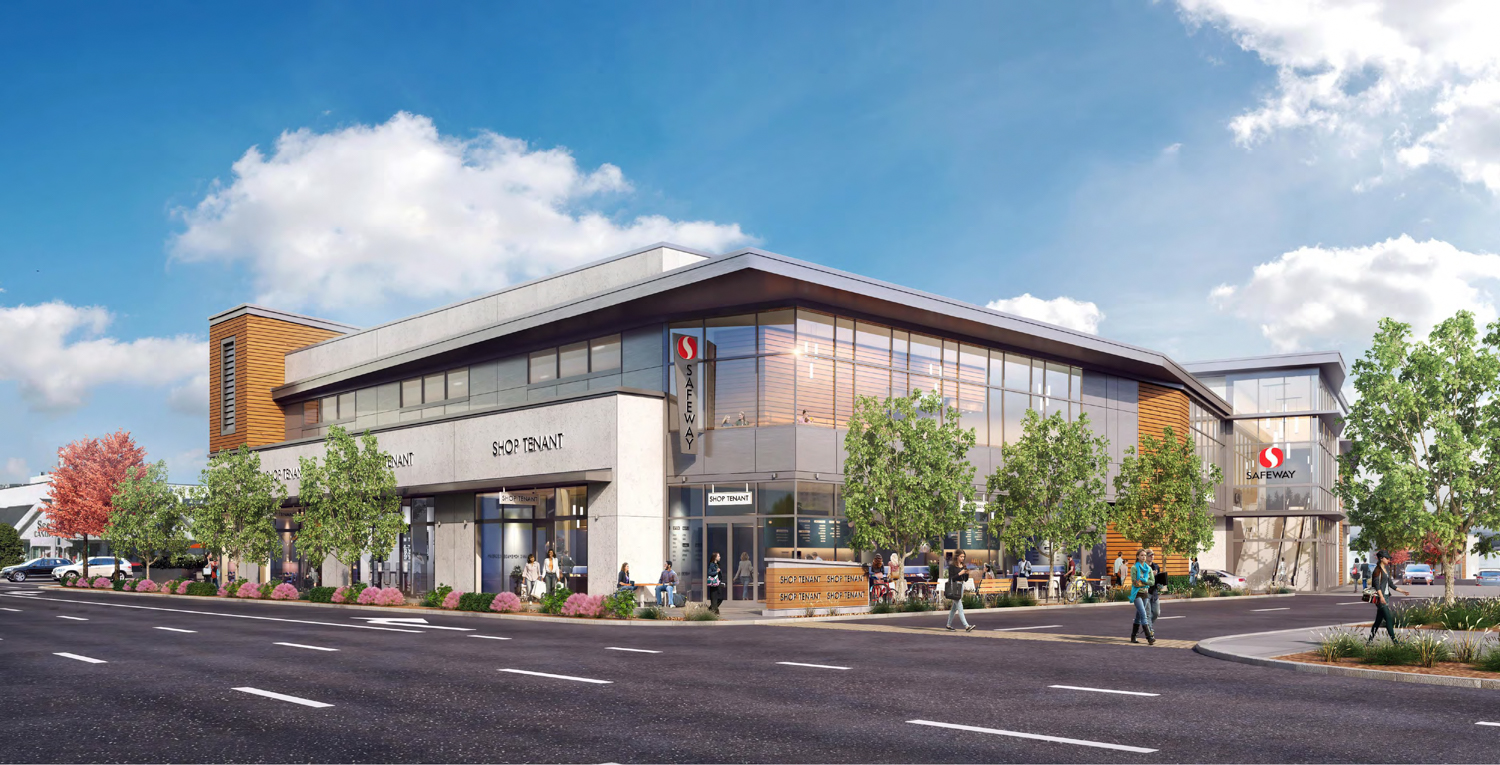 The 14.5-acre property is currently occupied with a vacant 141,000-square-foot strip mall and surface parking. The site will be divided into four lots, of which one has already been approved in a separate plan. Adjacent to the Project, SteelWave is building a 74,000 square foot Safeway anchored retail center previously covered by YIMBY, approved in 2021, and will commence construction in September 2022.

For today, Steelwave will present plans for the remaining three lots, with plans to build a new life-science campus, 183 homes, parking for nearly 1,800 cars, and 2.5 acres of public open space. The project design is led by one of the world’s most prominent architecture firms, Skidmore, Owings & Merrill. SOM is currently working on several other projects across the San Francisco Peninsula, with another project, 121 East Grand Avenue, to be reviewed by the Planning Commission in the same meeting today. 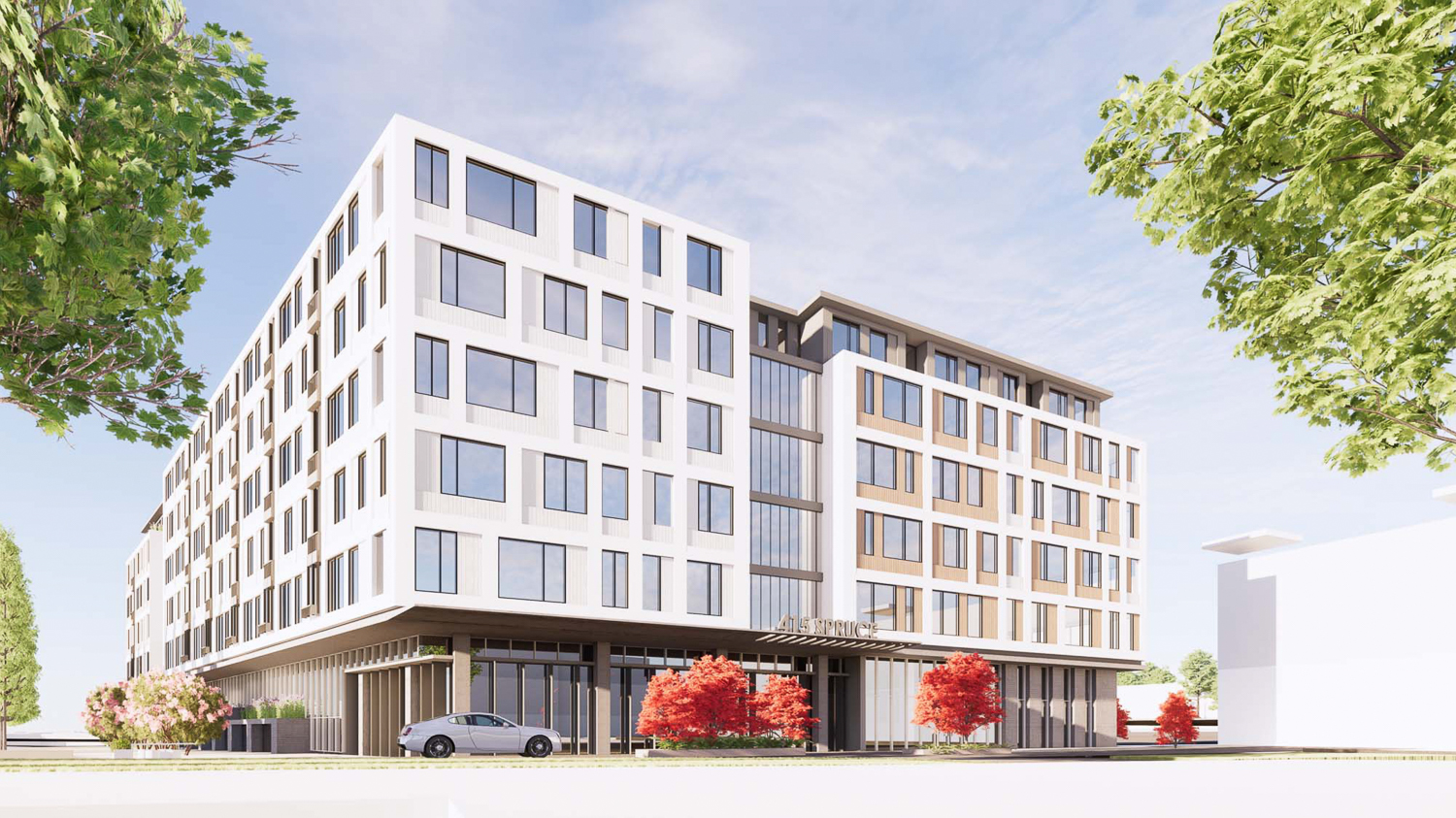 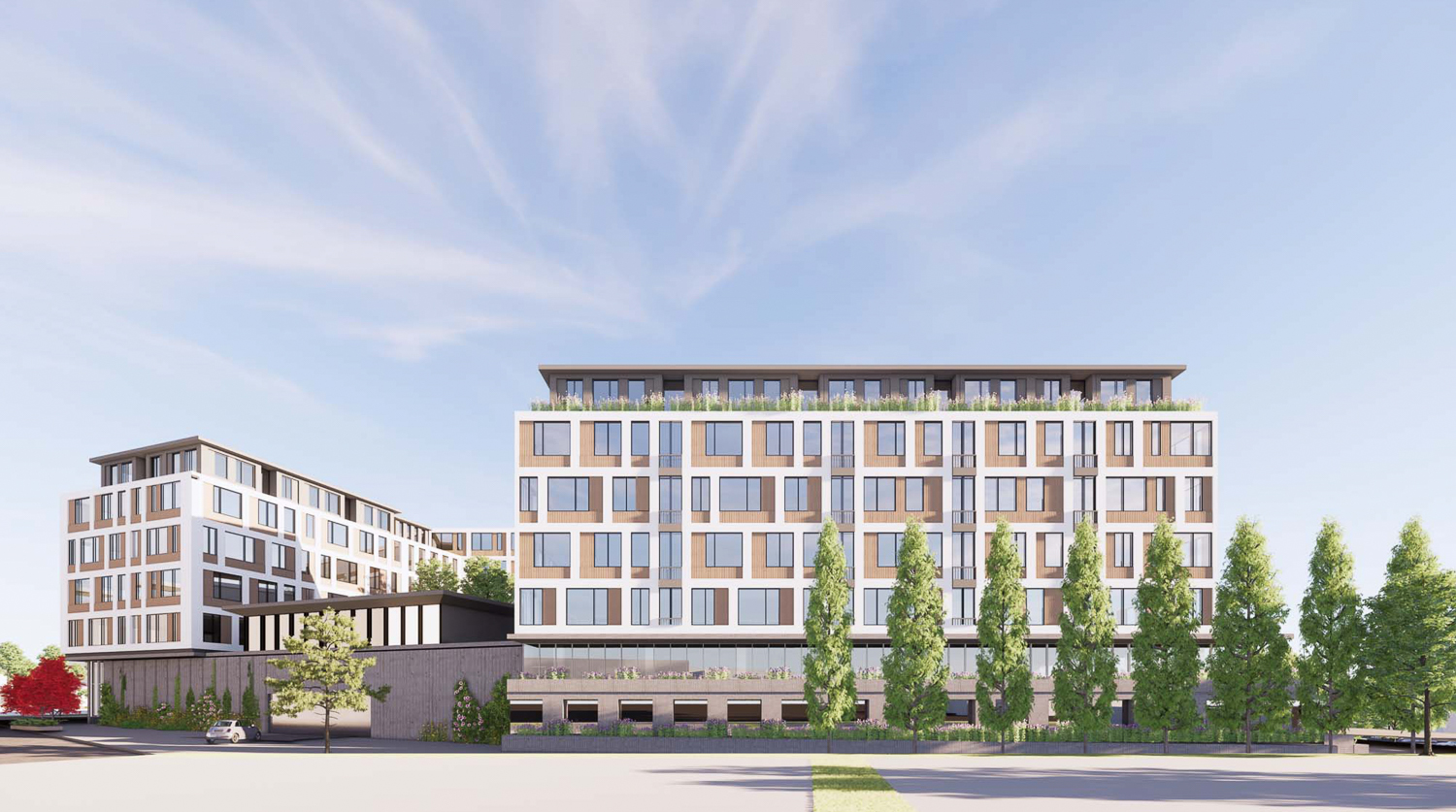 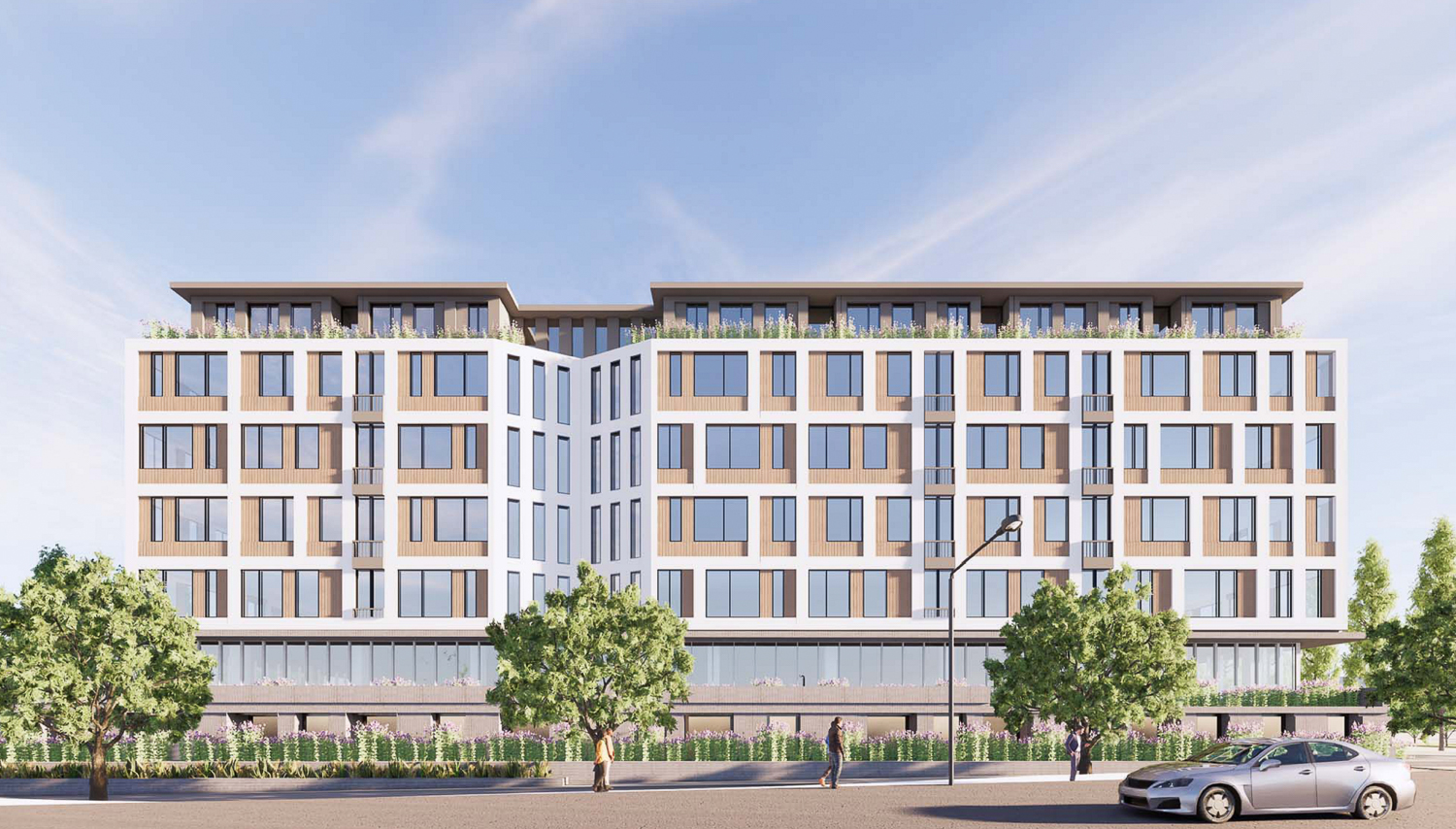 On the 1.9-acre Lot B, the 85-foot seven-story apartment building will yield around 276,480 square feet with 205,990 square feet for housing and 61,000 square feet for the 290-car garage. Additional parking will be included for 92 bicycles. Unit sizes will vary with nine studios, 109 one-bedrooms, 54 two-bedrooms, and 11 three-bedrooms. there will be 27 affordable apartments with nine units for very-low income households and 18 units for low-income households. Additionally, a $12.5 million fee will be collected from the office project for future affordable housing. Renderings show the apartment will be addressed as 415 Spruce Avenue. 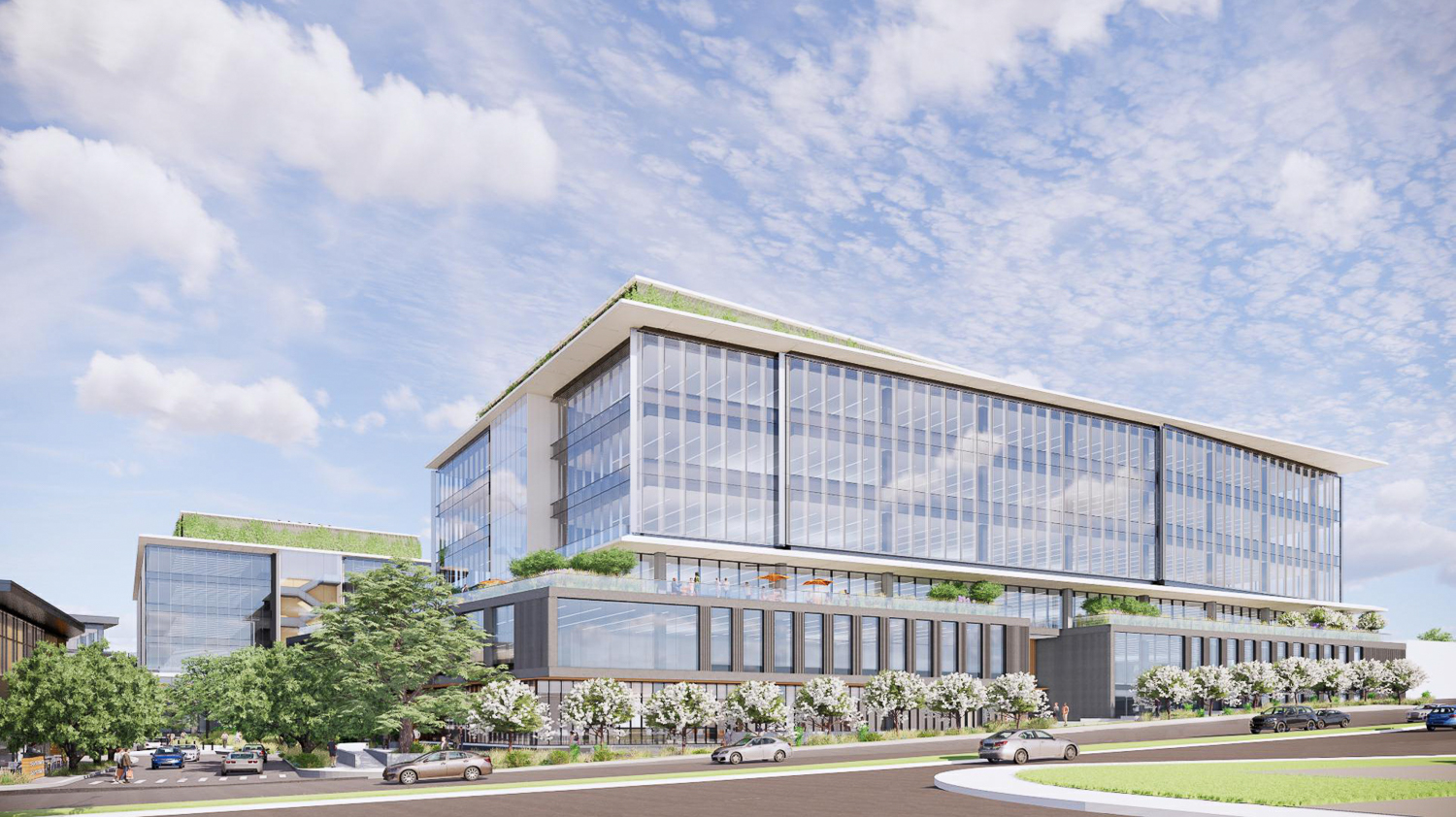 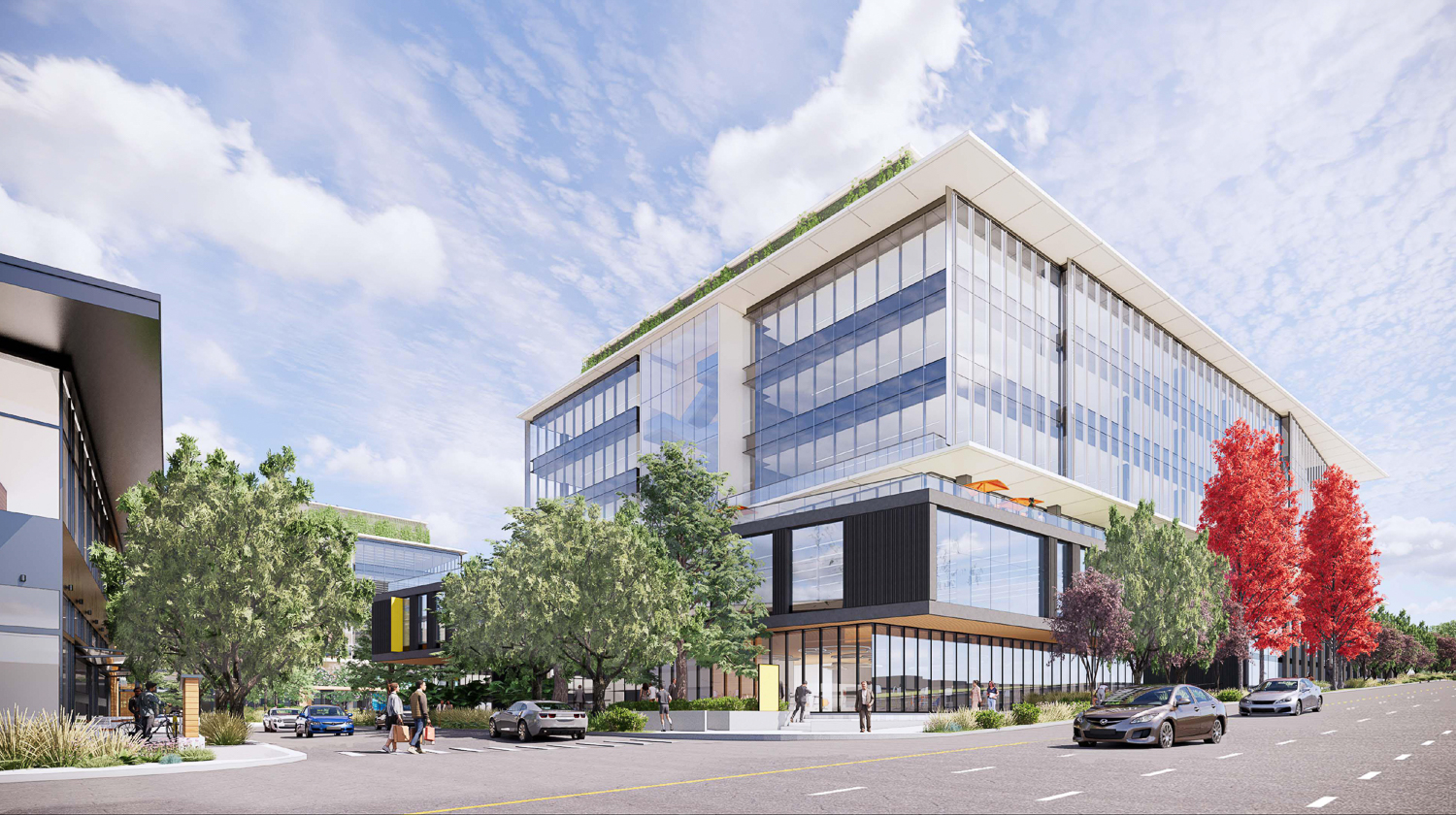 The roughly six-acre Lot C will be developed with three six-story office buildings. Each building will rise 109 feet tall with generous ceiling heights, containing between 223,000 and 256,000 square feet each for a sum of 747,980 square feet. Building 1 will include a communal conference center, an indoor/outdoor cafe, a restaurant, and a private athletic club. 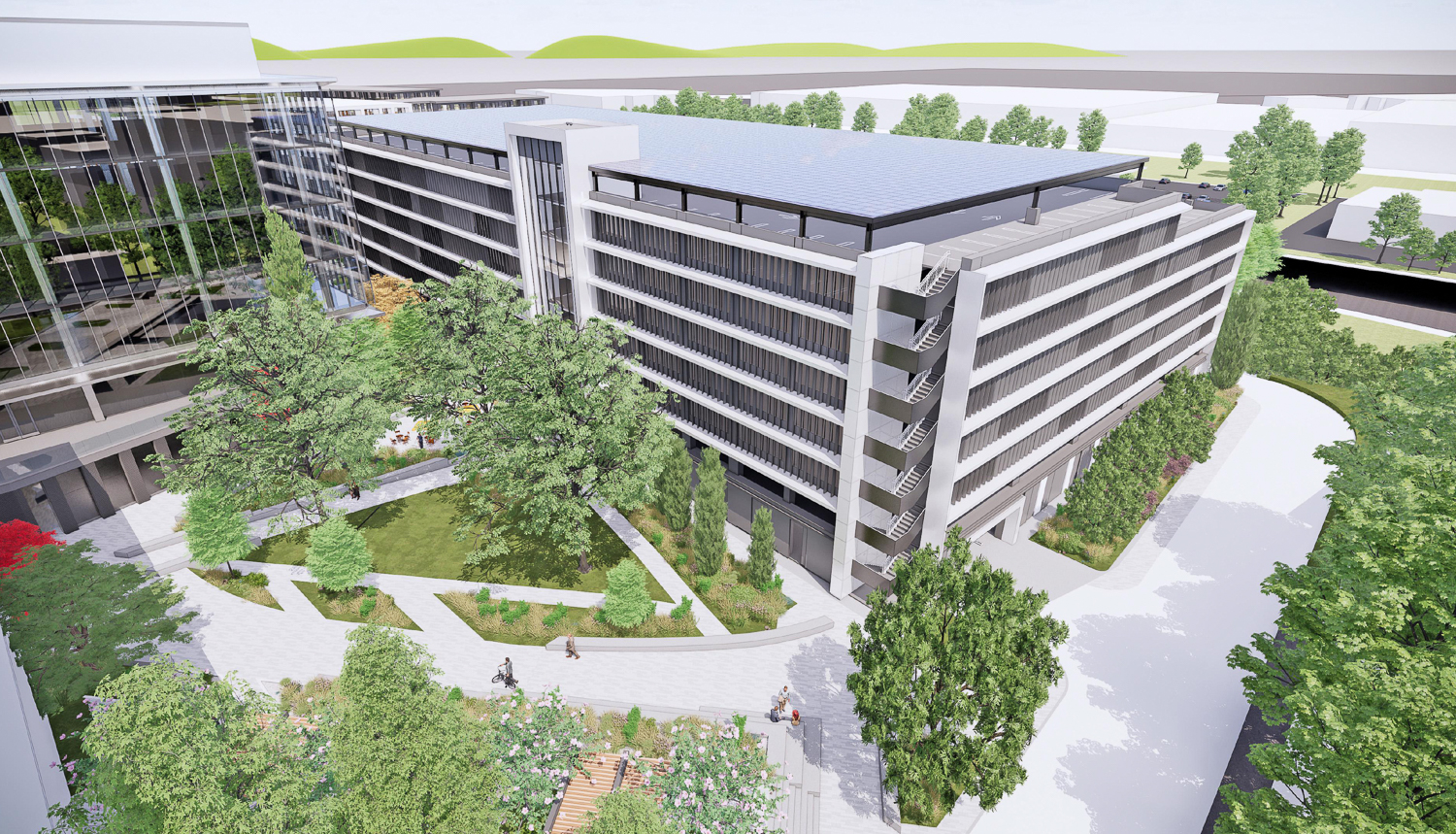 Steelwave plans to cover Lot D with an eight-story garage spanning 465,500 square feet with a capacity for 1,540 vehicles and 156 bicycles. In total, the three proposed lots will create parking for 1,793 cars.

Before construction starts on the proposal in front of the planning commission today, Steelwave is set to begin work on the 74,000 square foot commercial hub on Lot A, with 10,000 square feet of retail shops and 64,000 square feet for the new Safeway store. Additional parking will be included for 197 cars. Lowney Architecture is designing the store. Work is expected to start next month, with completion by November 2024.

SOM is the project architect. The offices will be clad with curtainwall glass framed by protruding metal awnings. Textured Glass Fiber Reinforced Concrete finishes will wrap around the office podiums to enhance the pedestrian experience. The housing exterior will be articulated with an irregular gridded skin made of cementitious panels, aluminum, cast-in-place concrete, and wood flair. 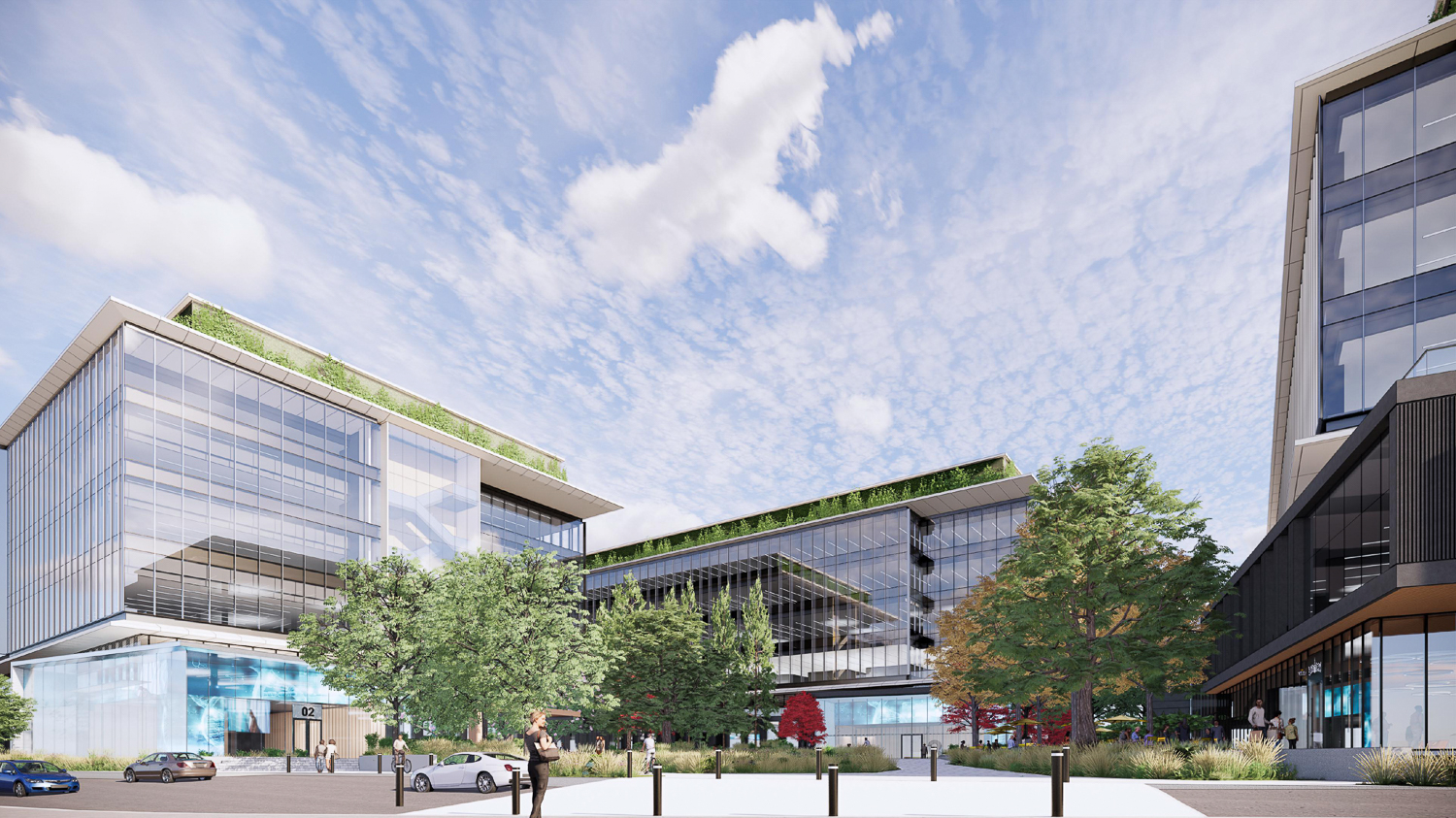 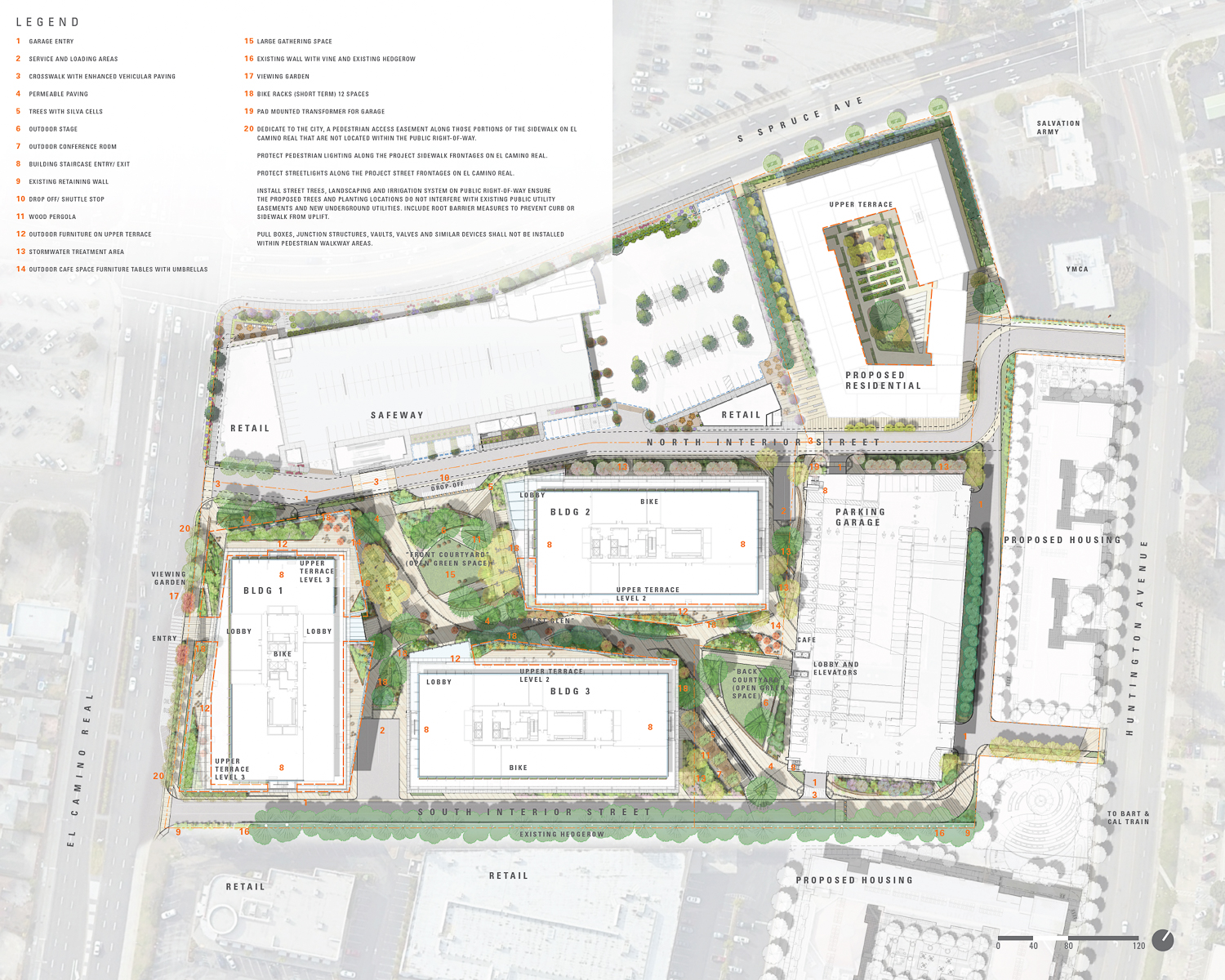 Carducci Associates is the landscape architect. Much of the open space will be situated by the three offices and the parking garage. The front courtyard is surrounded on three sides by the offices, while a back courtyard will provide a landscaped open space close to the south interior street. The two courtyards will be connected by the “Forest Glen” corridor, creating “a forest-like feeling achieved through tall pines accented with deciduous red maples and London plane trees,” as described by the project plan set.

Pedestrian pathways will create a pleasant network connecting all six structures, with a drop-off area and courtyard facing the Safeway and pathways connecting the apartments to the public open space. Landscaped amenities will include furniture, stormwater treatment areas, outdoor cafe seating, a large gathering space, viewing gardens for a peaceful backdrop visible from the cafeteria, short-term bike racks, and a wood pergola. 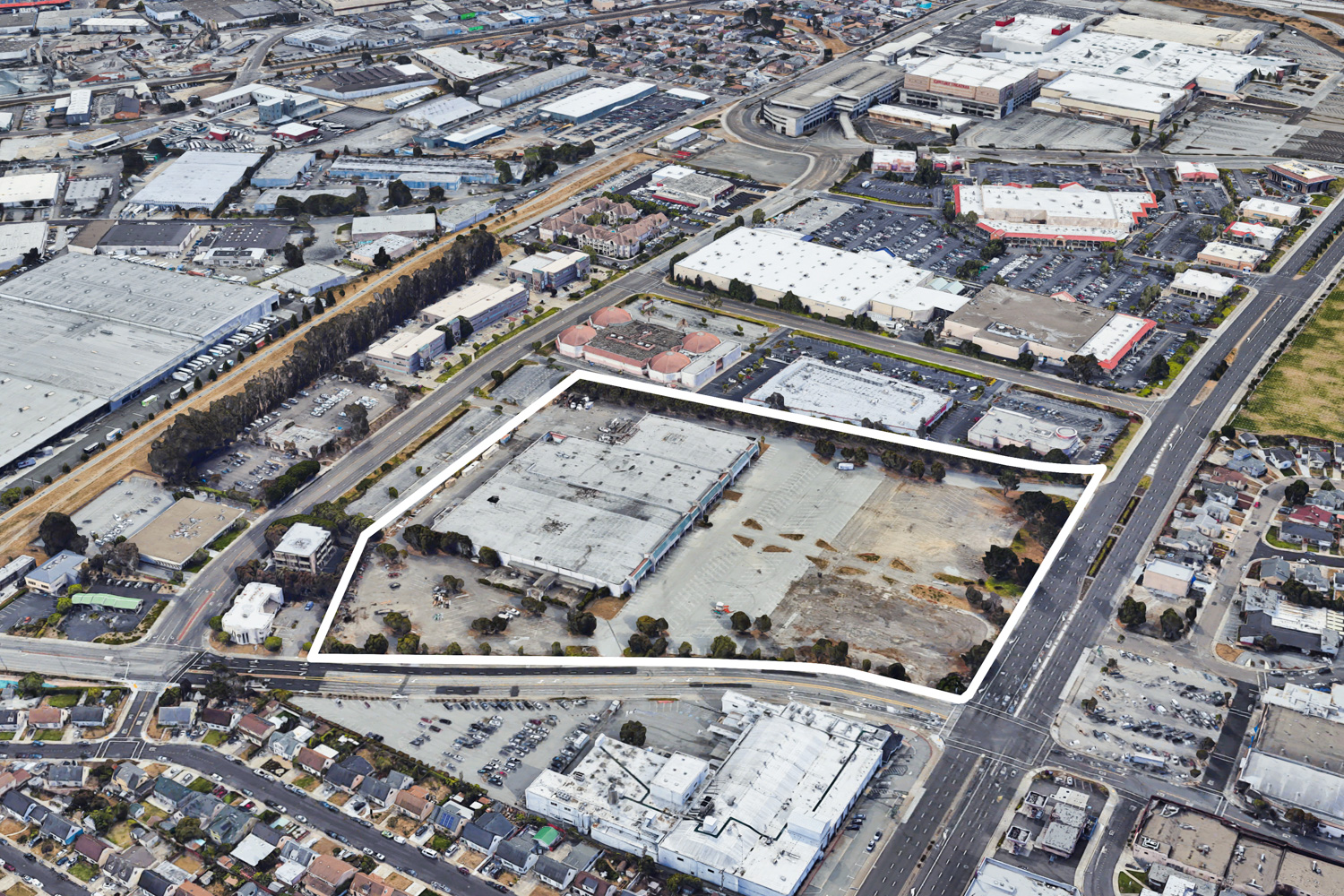 The property is a 15-minute walk away from the San Bruno BART Station, walking by several big-box retail stores, restaurants, and the Shops at Tanforan mall. The South San Francisco Caltrain station is nearly two miles away, or 15 minutes by bicycle.

The project was approved by the Design Review Board in mid-May and the San Mate County Airport Land Use Commission a month ago. Construction is expected to last 34 months from groundbreaking to completion.

The Planning Commission meeting is scheduled for today, August 18th, starting at 7 PM. For more information about how to attend, visit the city website here.