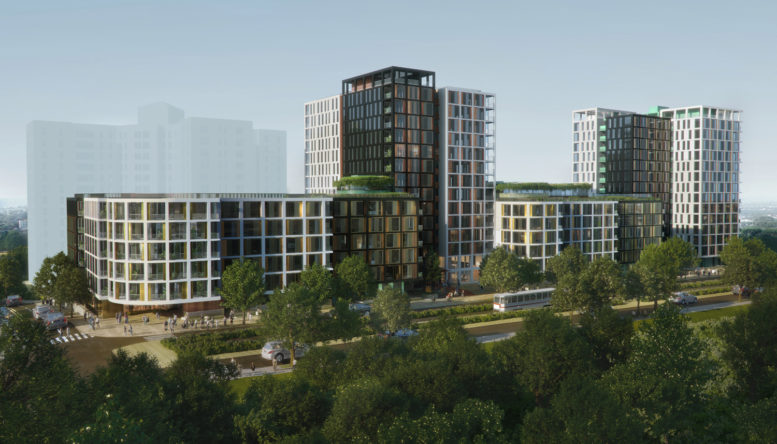 New renderings have been published for three new buildings with 896 units in the urban redevelopment of Parkmerced in San Francisco. The structures constitute Phases 1C and 1D, the last two subphases of the first leg of construction. Maximus Real Estate Partners is developing the 152-acre master plan.

The recently revealed images show the proposed design for Blocks 3W, 4, and 21S, with a combined residential capacity of 896 units with parking for 642 cars and 461 bicycles. 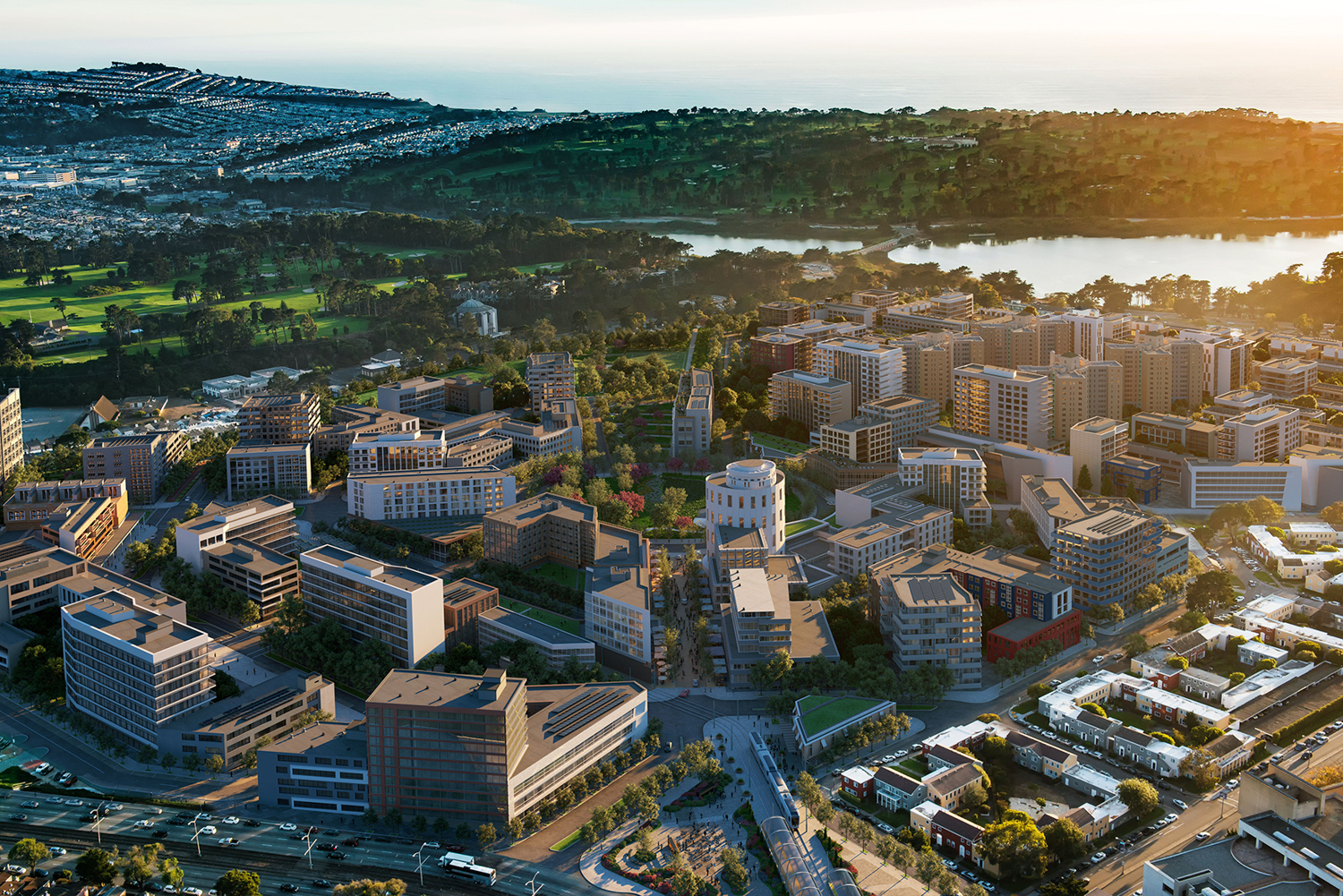 Park Merced full build-out aerial overview with massings and a view of , rendering by Parkmerced 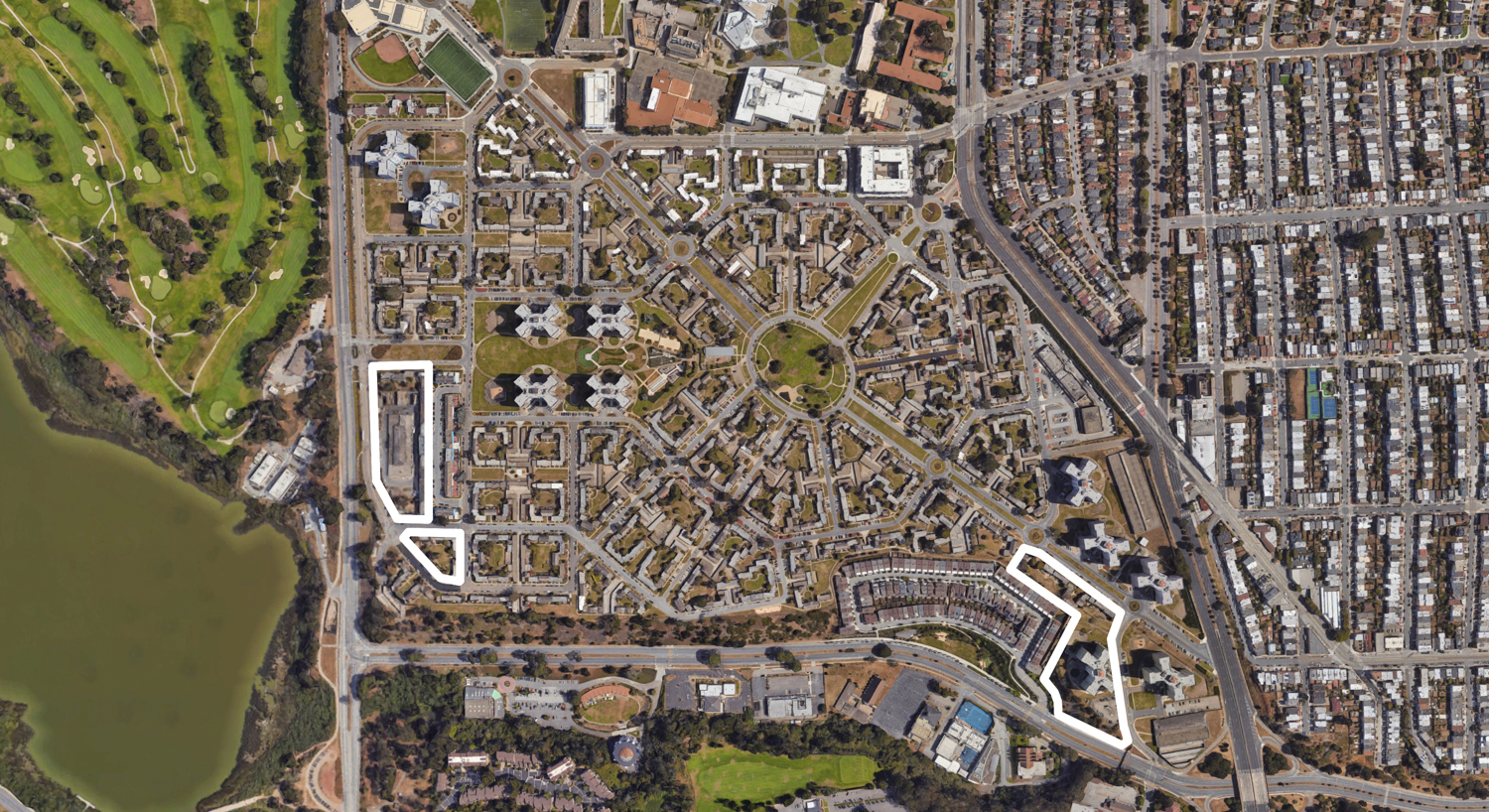 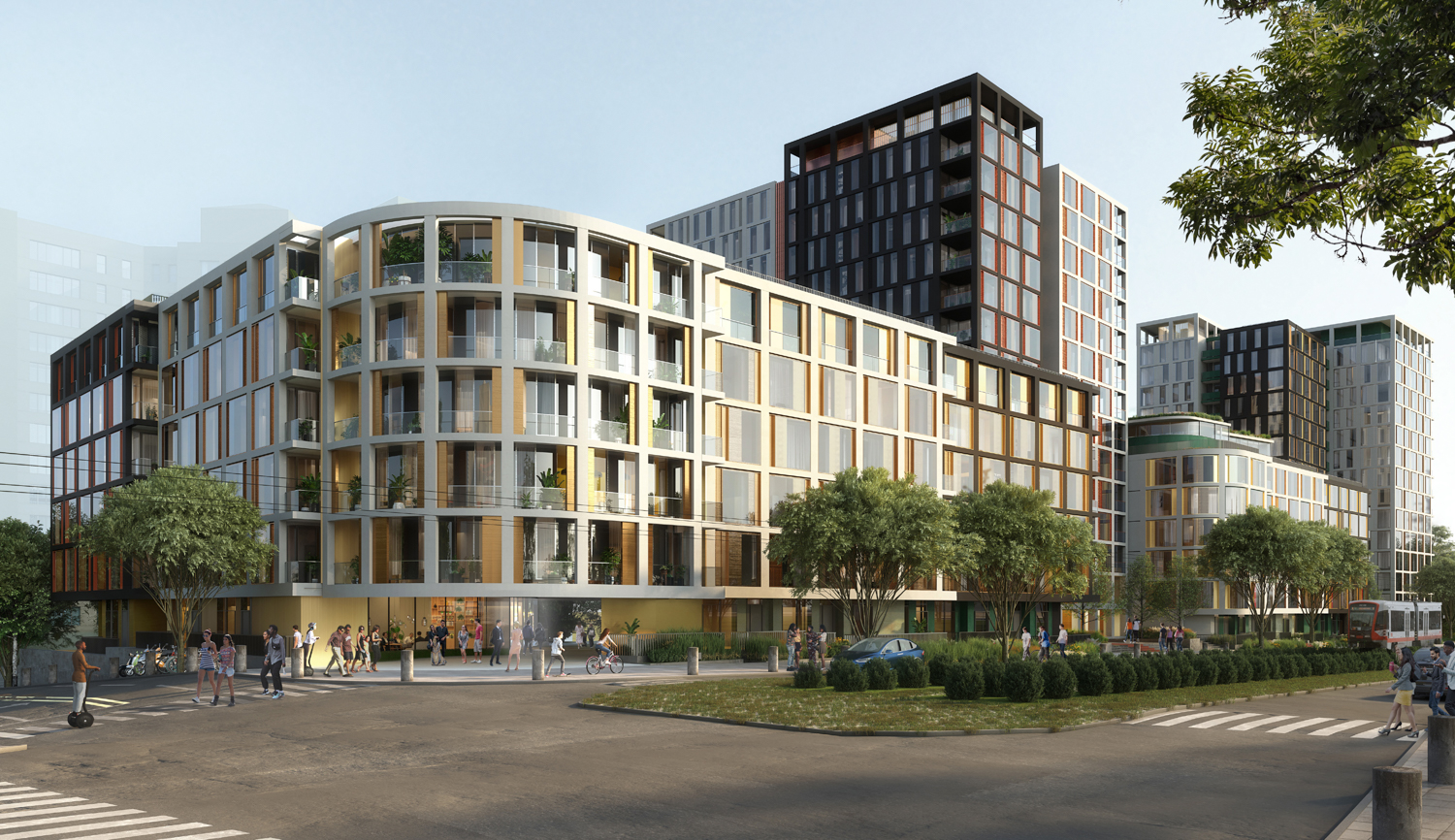 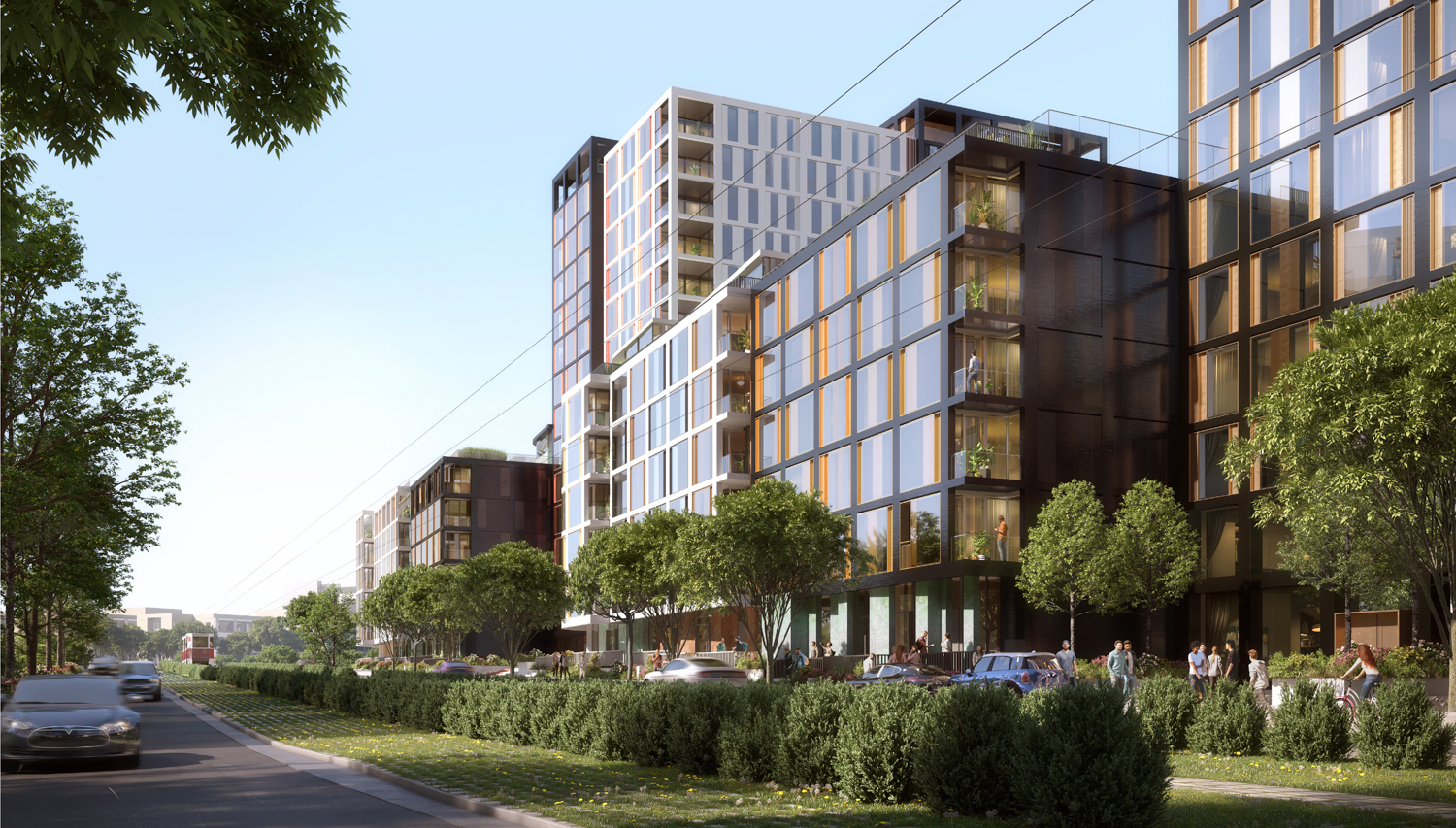 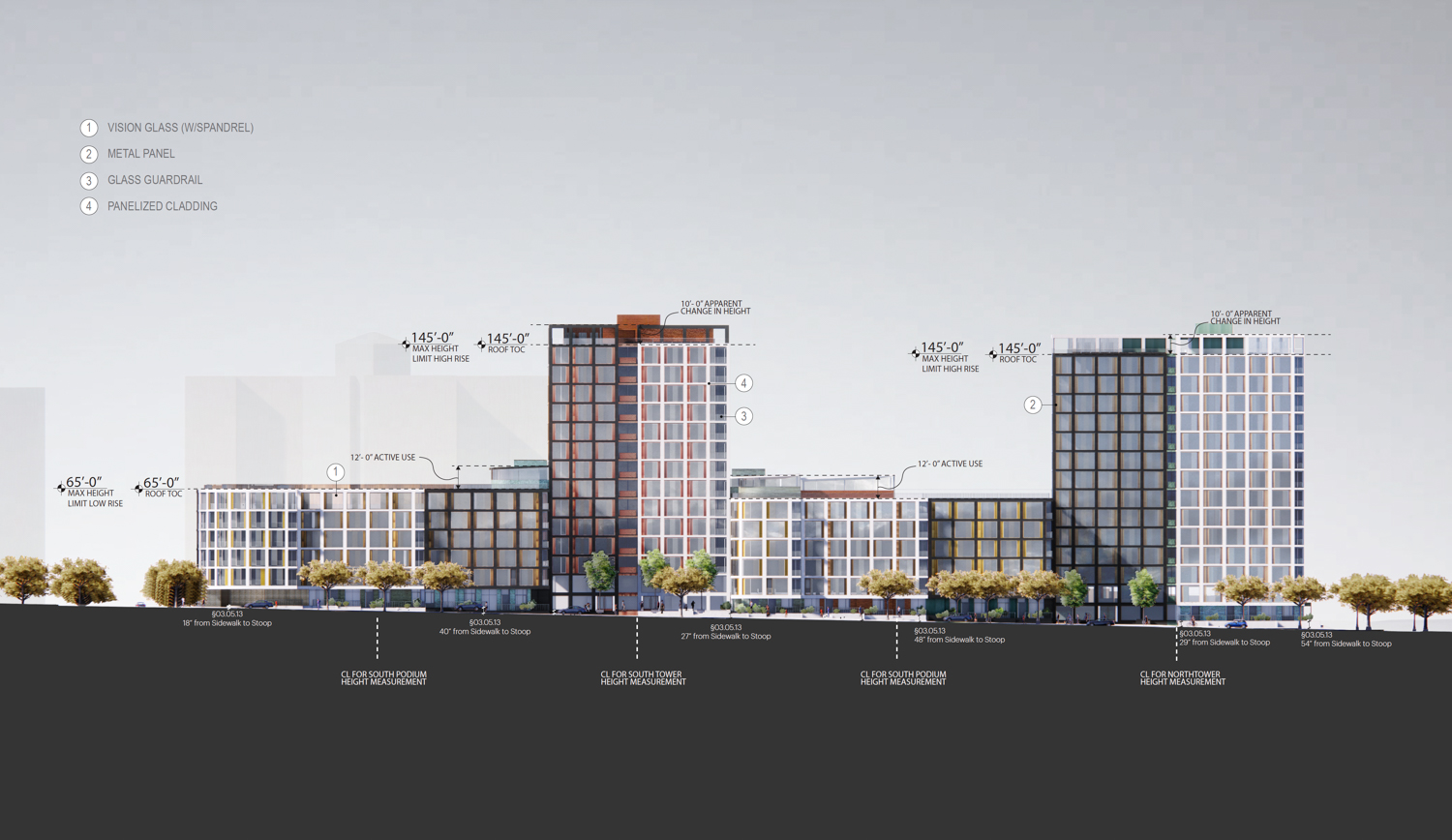 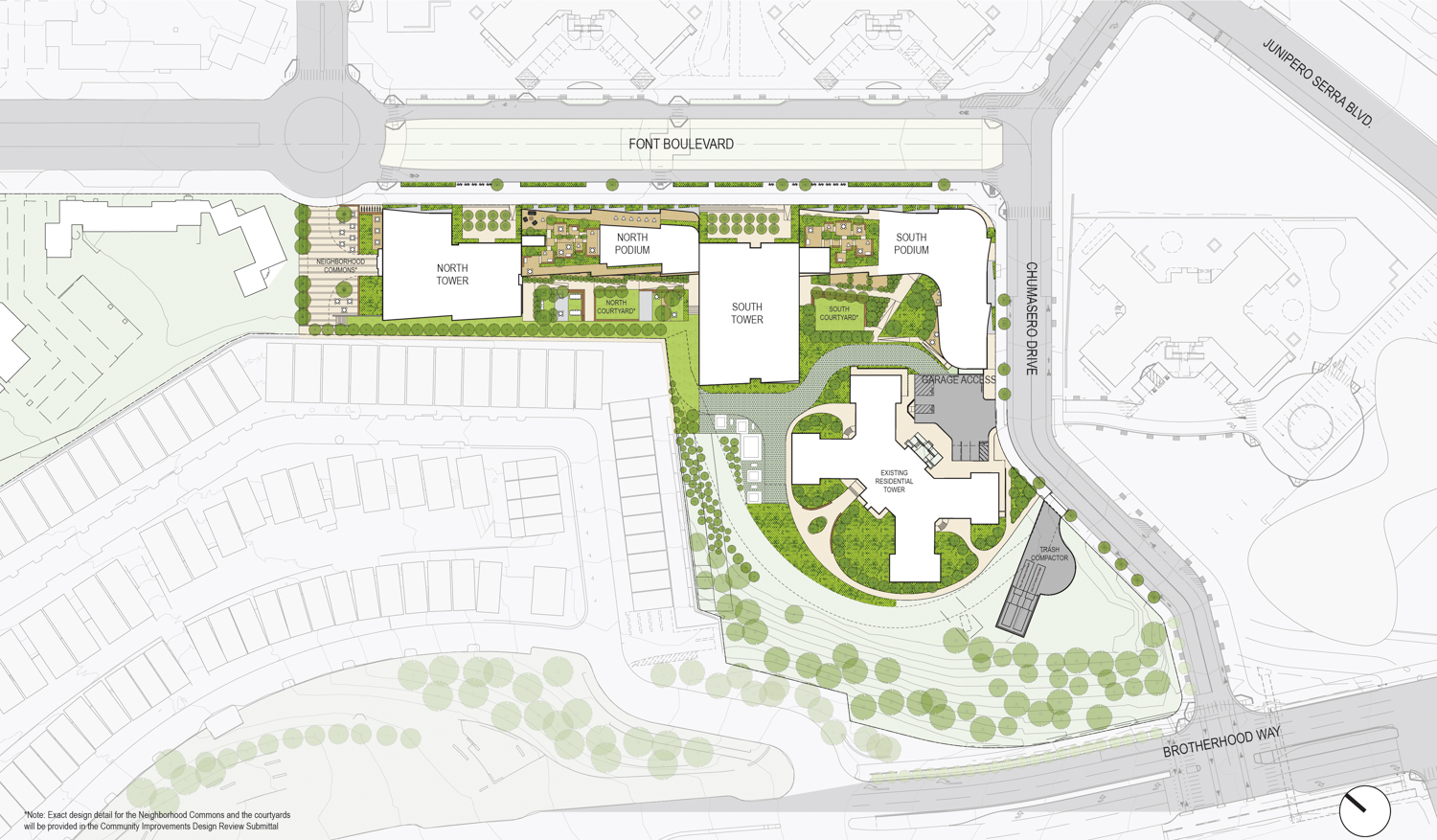 The most striking new renderings published are for 101 Font Boulevard on Block 21S. The 14-story structure is scheduled to rise during Phase 1D, creating 471 new apartments. The 145-foot tall structure will yield 551,160 square feet with 449,310 square feet for housing, 17,050 square feet of amenities, and 108,970 square feet within the basement for mechanical facilities and the 153-car garage. Additional storage will be included for parking 240 bicycles.

Kohn Pedersen Fox Associates is responsible for the design, which includes two towers connected by a six-story podium. The north tower will have 154 units, the south tower 174 units, and 143 units spread across the podium. Apartment sizes will vary with 183 studios, 126 one-bedrooms, 95 two-bedrooms, and 67 three-bedrooms. 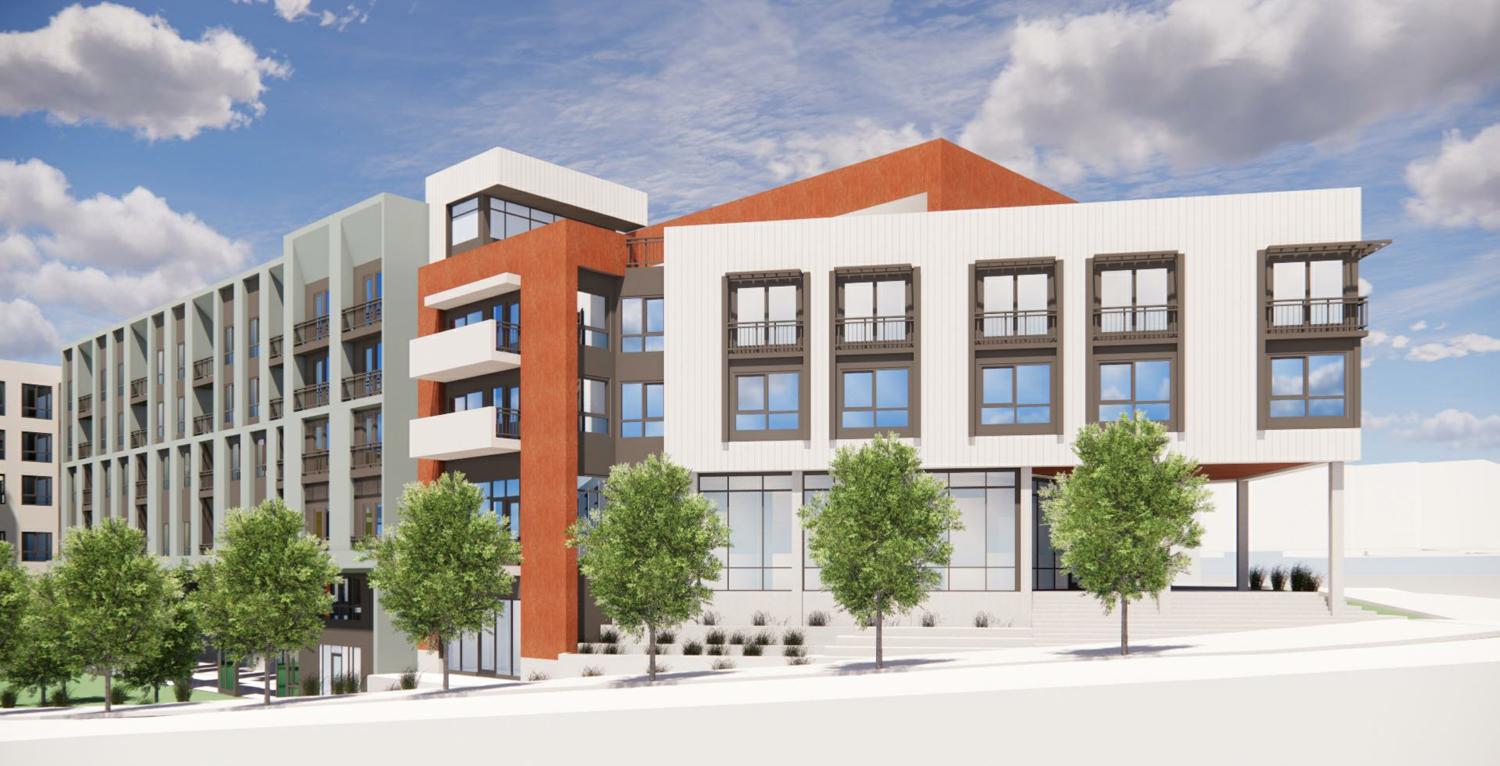 On the far west edge of Phase 1C will be Block 3W, addressed as 99 Higuera Avenue. The 274-unit project is designed by BDE Architecture. According to the project documents, BDE worked “to scale down the project’s perceived size, the building is divided into three distinct masses each with its own architectural style.” Each style is divided by a mid-block pedestrian paseo, increasing pedestrian connectivity from Vidal Drive to the alley.

Unit sizes will vary with 31 studios, 91 one-bedrooms, 119 two-bedrooms, and 33 three-bedrooms. Of the 274 total units, 108 will be new market-rate apartments, while 166 will be offered as replacement housing for existing households.

Residential amenities will include two ground-level courtyards and two common roof decks with commanding views of the adjacent Lake Merced to the west and Twin Peaks to the northeast.

Facade materials will include cement plaster, metal siding, and board siding. Architectural variation will be achieved with facade treatment, railings, and decorative features. The project will use durable wood panel finishes. 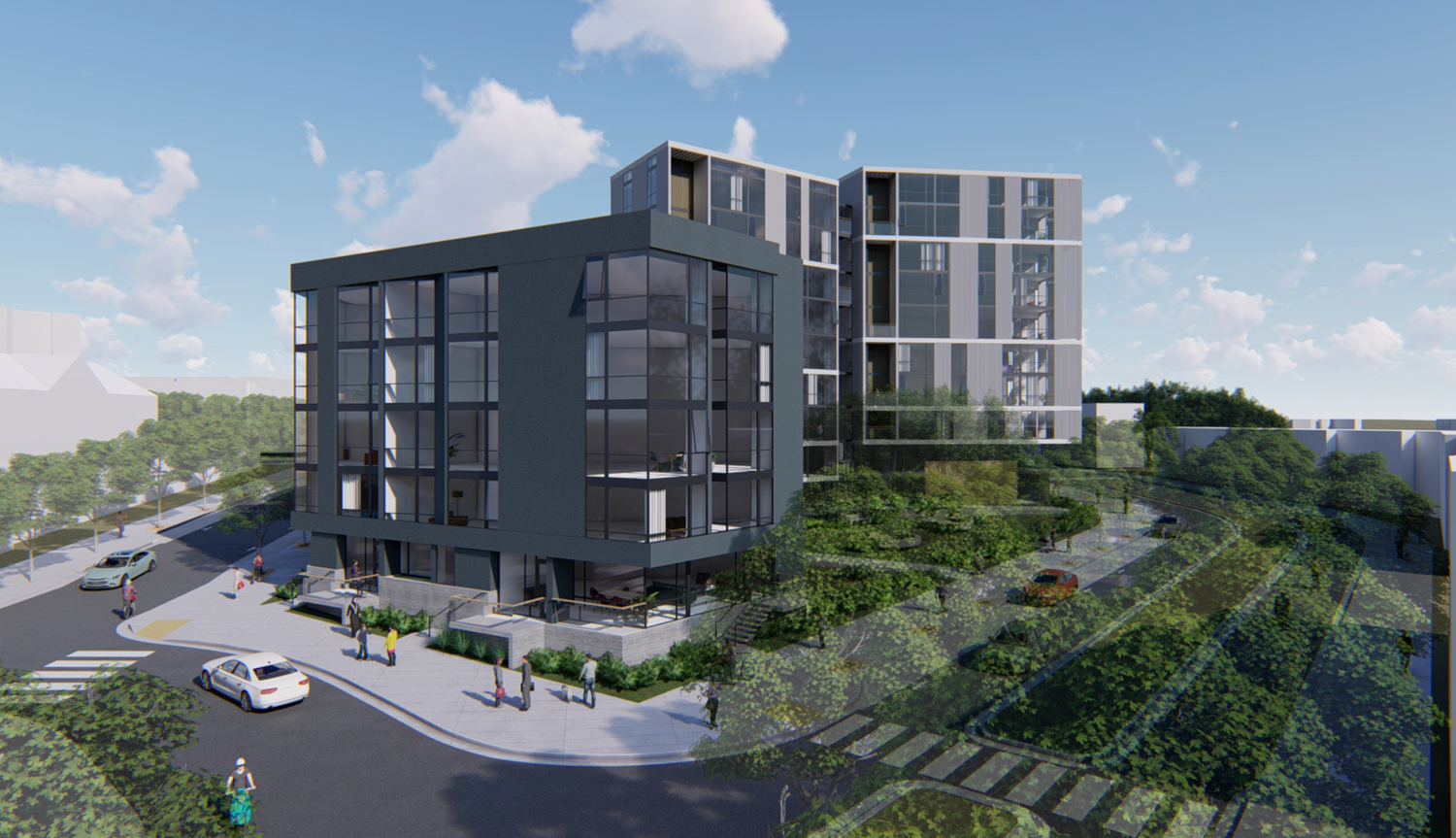 600 Arballo Drive from the corner of Garces and Vidal, rendering by Kennerly Architecture 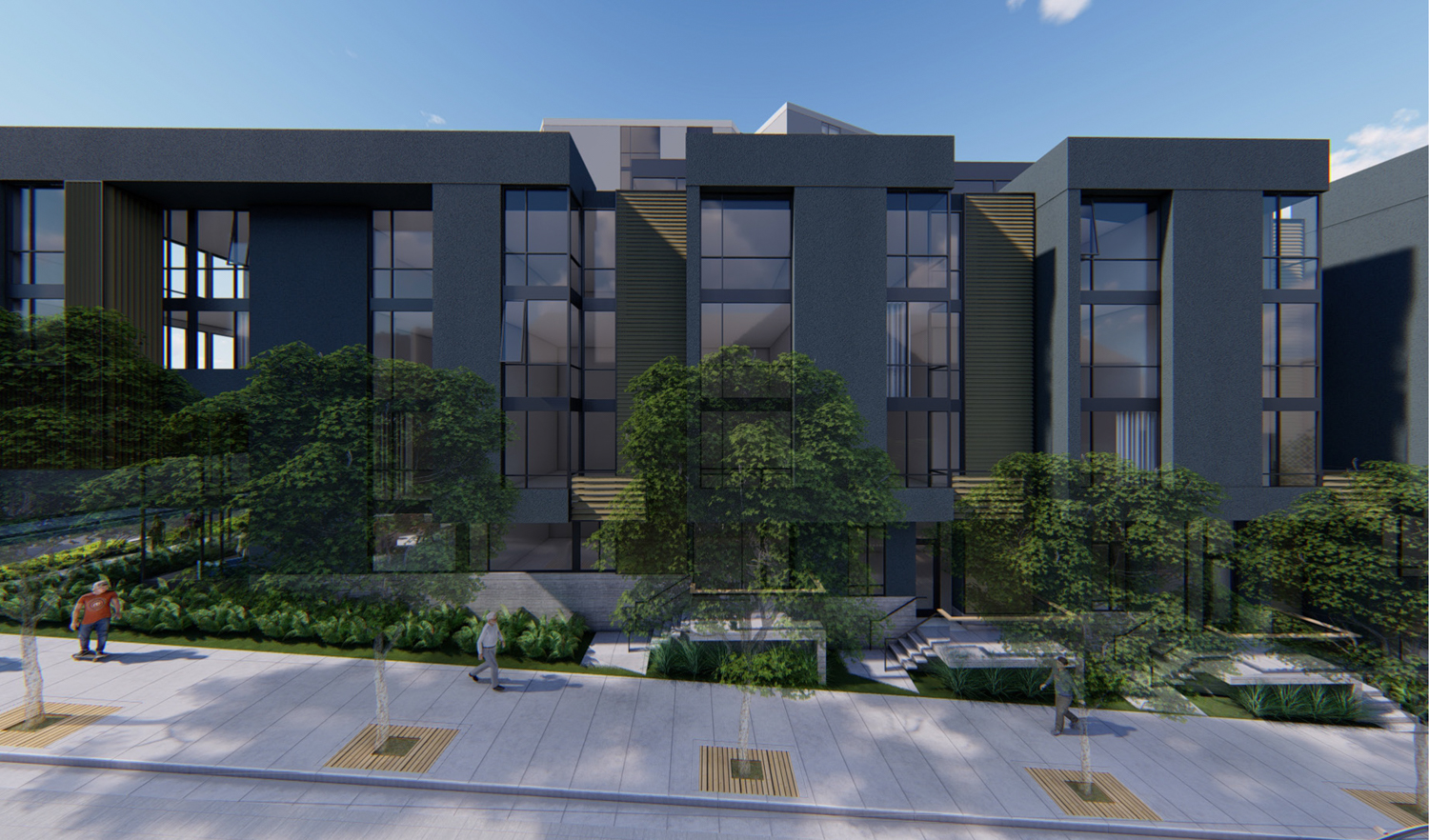 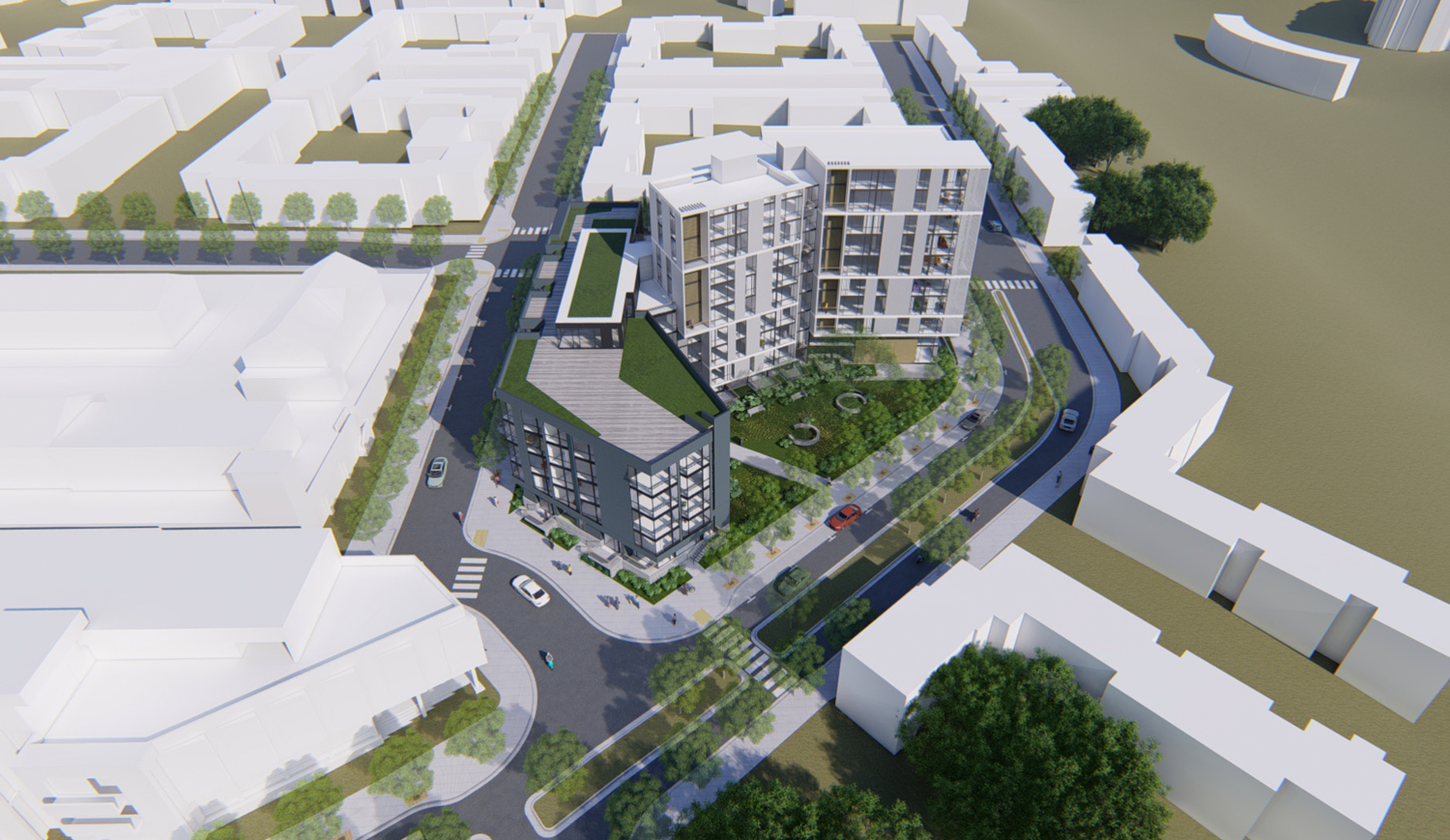 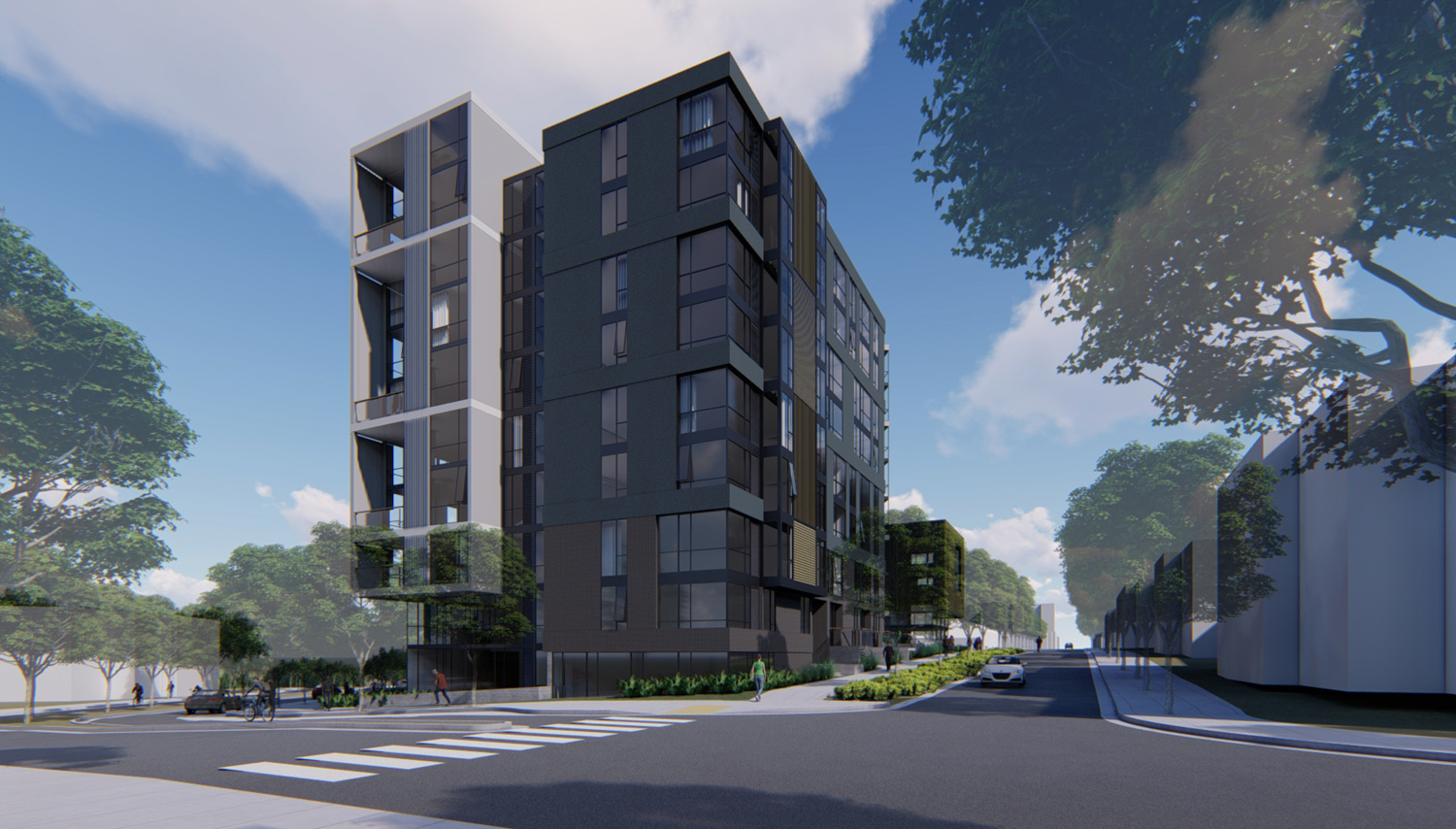 600 Arballo Drive from the corner of Vidal and Arballo, rendering by Kennerly Architecture 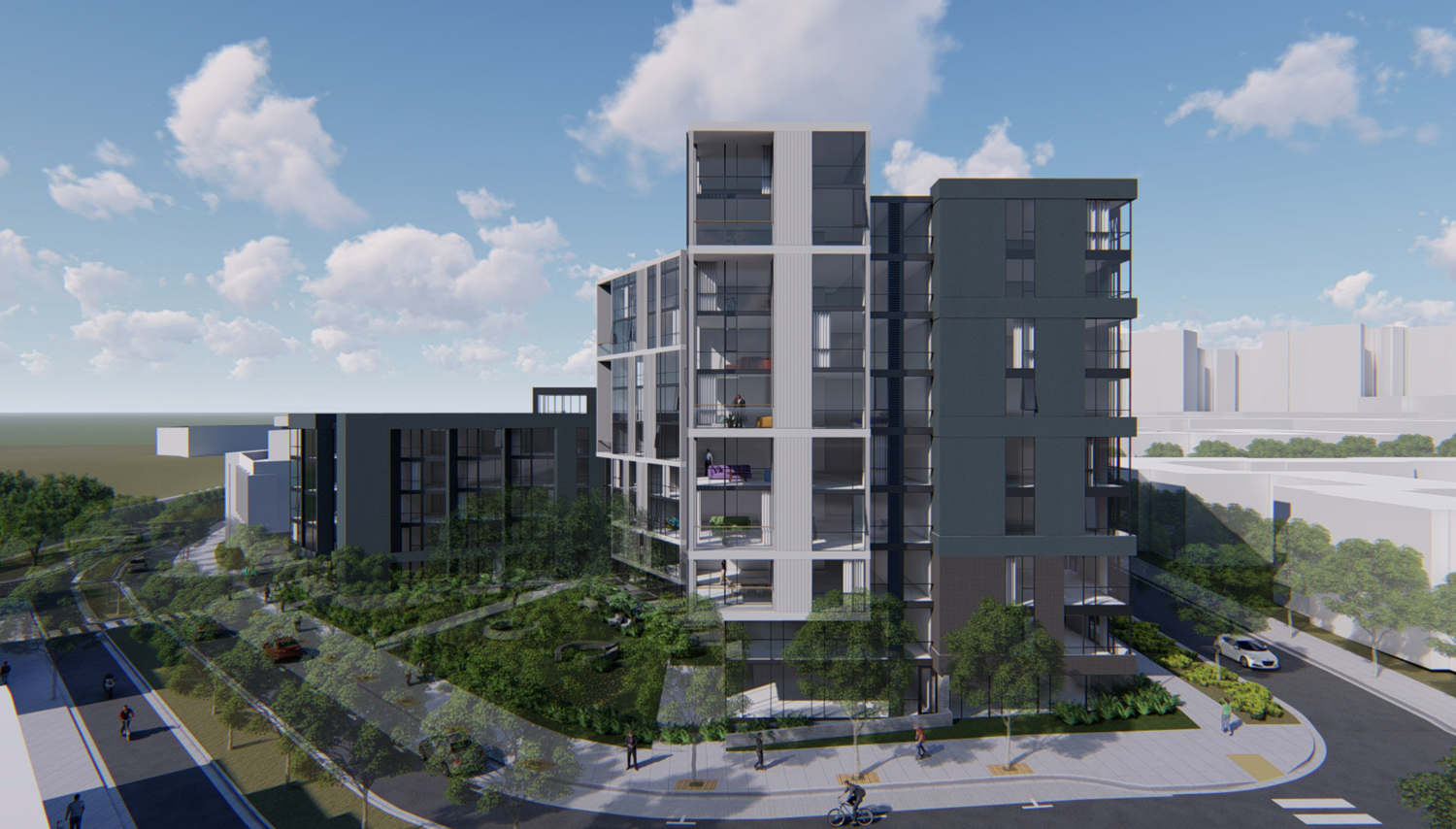 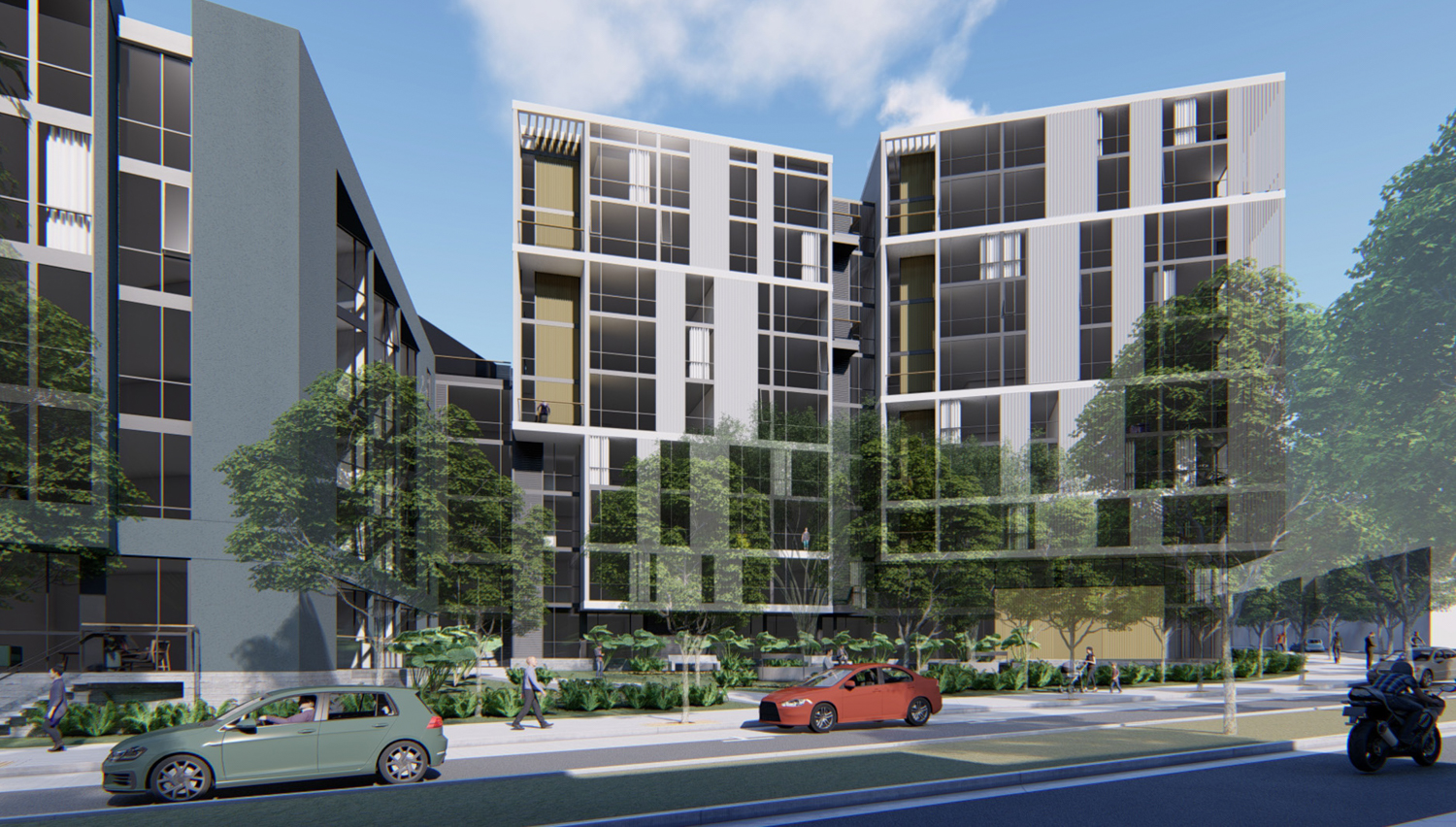 The final new building revealed with the document dump is the 151-unit Block B4 at 600 Arballo Drive. The 85-foot tall structure will yield 152,170 square feet, primarily for housing. Unit sizes will vary with 40 studios, 42 one-bedrooms, 46 two-bedrooms, and 23 three-bedrooms. Parking will be included for 84 bicycles and no cars, helping achieve the project’s goal of being transit-friendly.

Kennerly Architecture & Planning is responsible for the design. Residential amenities will include a lounge, fitness center, and co-working spaces. A landscaped ground-level courtyard and roof decks will offer distinct open space for relaxation and entertainment. 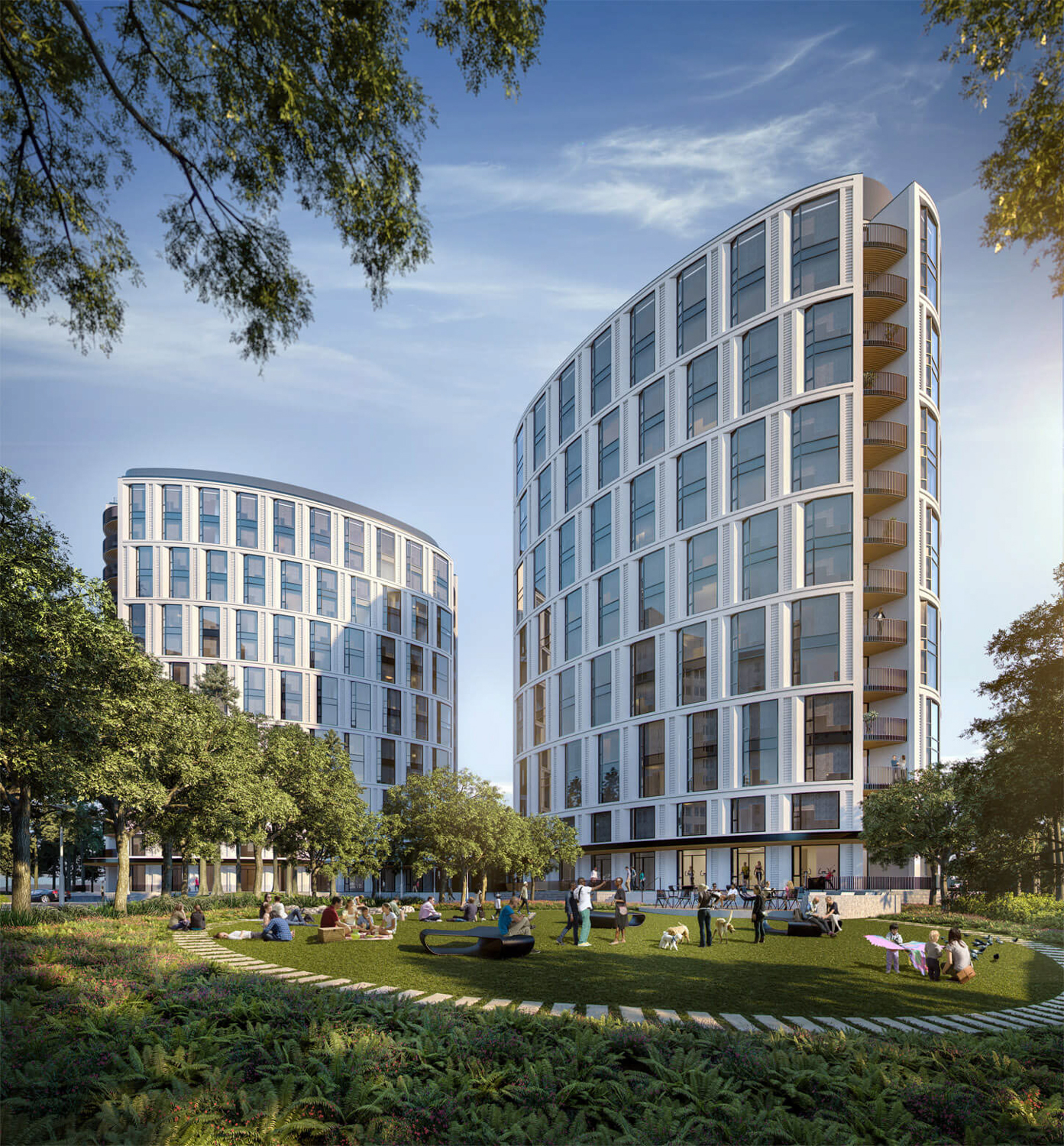 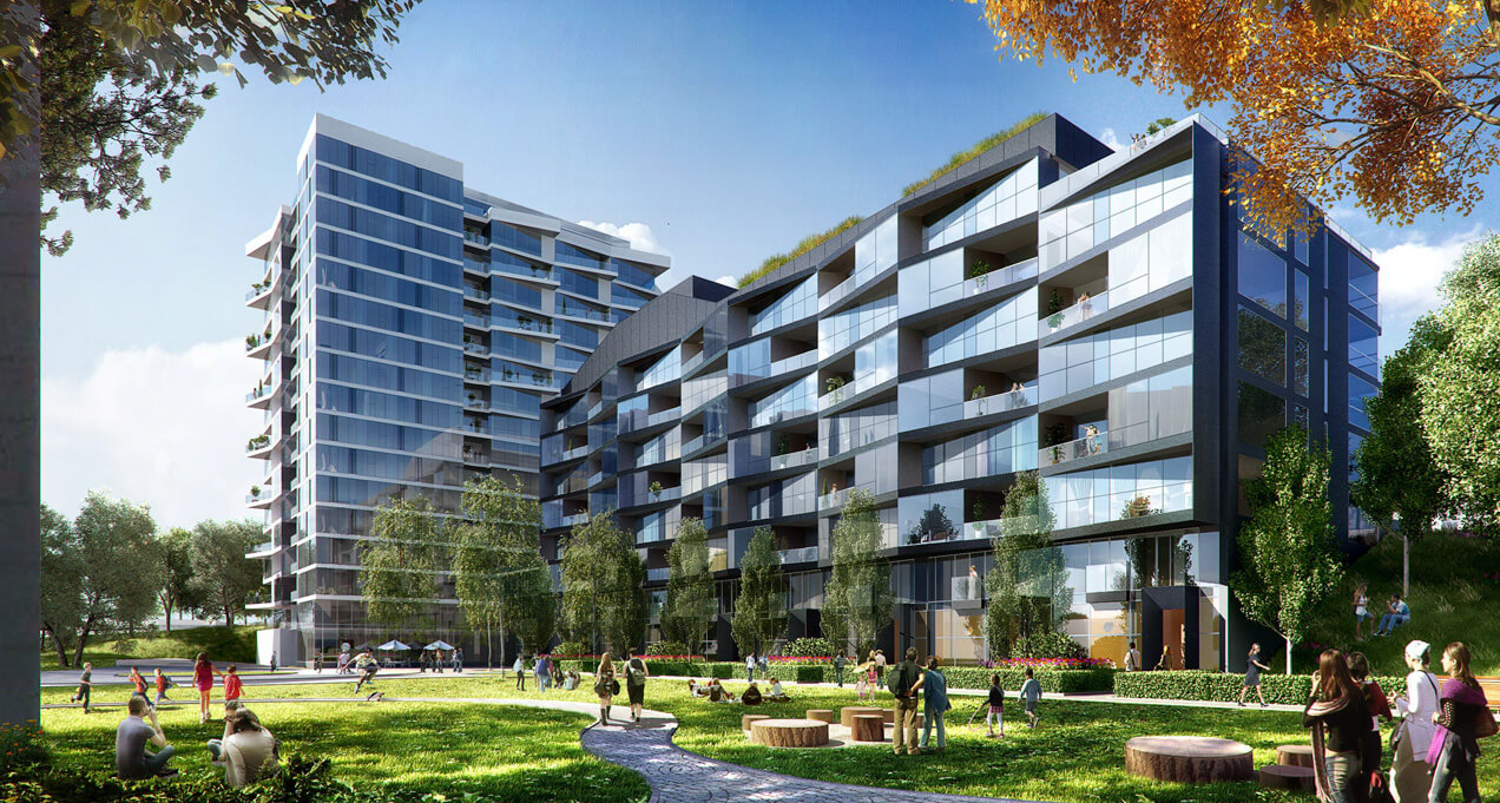 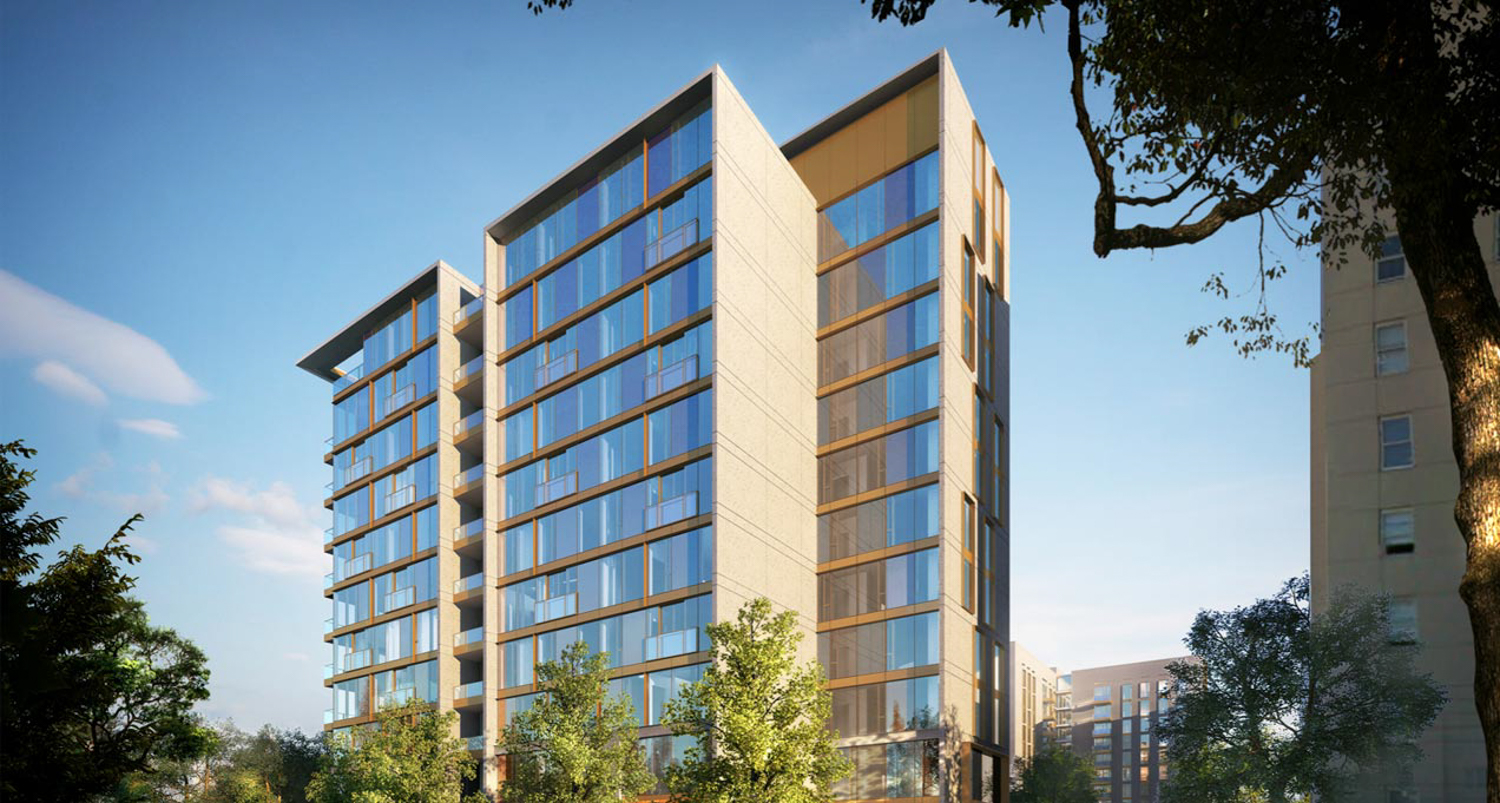 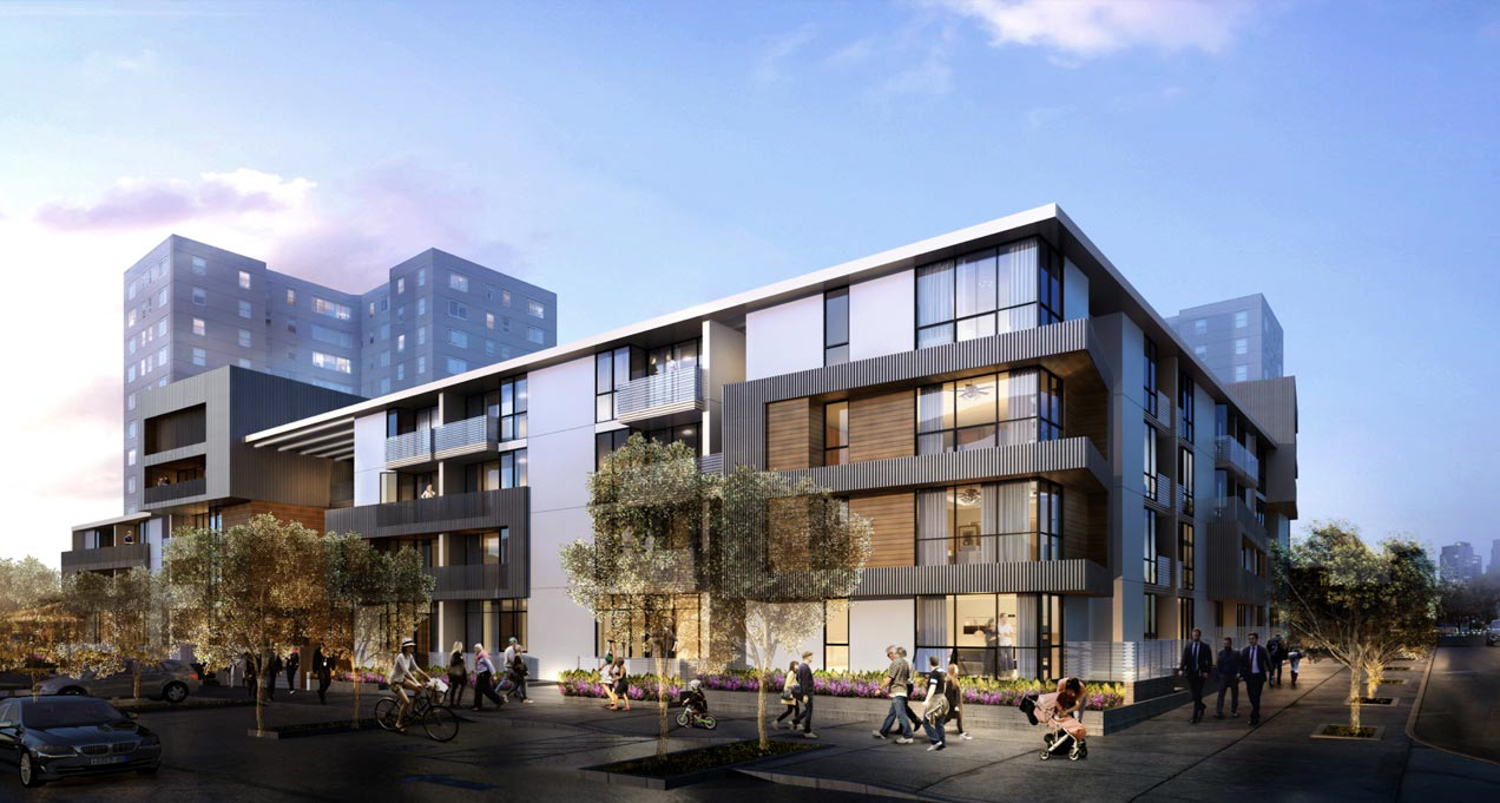 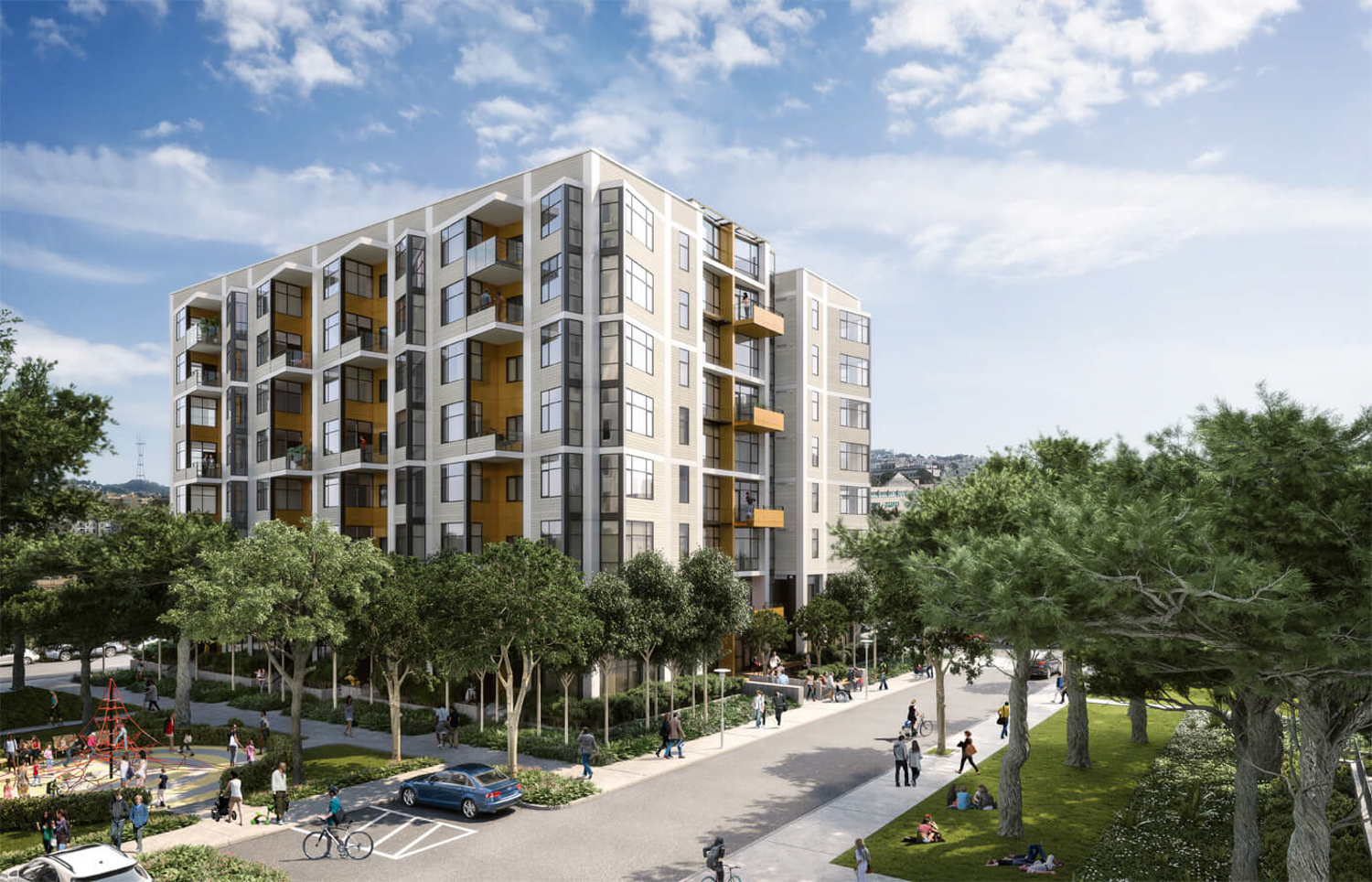 The first stage of construction will be phases 1A and 1B. The two phases will reshape four blocks on the eastern and western ends of the master plan. Construction will add around 1,013 units across five new buildings designed by separate architects. Once complete, the buildings will offer replacement housing for the residents affected by Phases 1C and 1D.

Parkmerced was originally developed between 1941 and 1951 to become a ‘Marvel of Modernism’ with 3,221 units for veterans. The property was designed by architect Leonard Schultze and Associates, with landscape architecture by Thomas Church and Robert Royston. 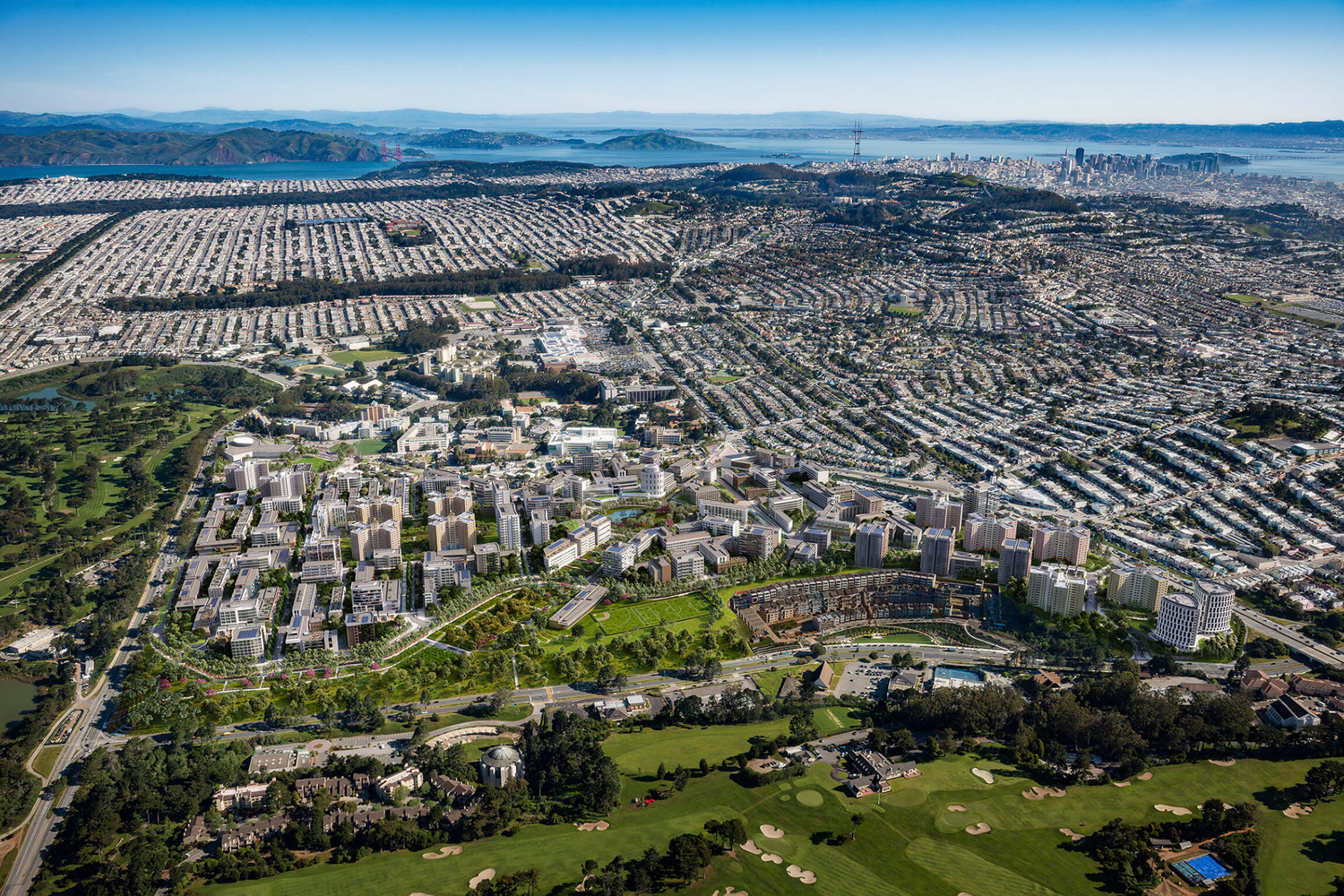 The master plan by Skidmore Owings & Merill aims to reinvent the area with a thriving pedestrian-oriented neighborhood. The project will connect to the city with two new MUNI light rail stations, bus shuttles connecting residents to BART for regional transit, and dedicated bicycle paths across the 152 acres.

The property will offer significant amounts of vehicular parking, with below-grade garages and dedicated garage structures on the west side of the site. There will be some blocks without car parking, particularly around the project’s ‘social heart’ area by the central round-about.

Park Merced full build-out aerial overview with massings and a view of , rendering by Parkmerced

The project is among several large masterplans across San Francisco that would reshape large swaths of land with a high-density neighborhood by transit. However, like many, it has been delayed for years. Maximus was able to secure new entitlements for the 152-acre neighborhood back in 2011 with Board approval. The plan was refinanced in 2014, and the City approved phase one in June of 2015, with construction expected imminently. The project was poised to start construction later in 2015, and again in 2018.

After the delay, Maximus secured $1.775 billion for refinancing Parkmerced in 2019 with Barclays, Citi, and Aimco. The firm expected to secure construction financing in early 2020, with groundbreaking expected by last year. The progress was delayed. YIMBY has contacted Maximus for a new estimate of when construction may start on Phases 1A and 1B. We have not received an answer as of the time of publication.

The project is located just south of the Stonestown Development Project. Brookfield is currently in the early process of planning a 2,900-unit redevelopment of the mall’s parking facilities. The development will create roughly a dozen new structures across 30 acres, of which six will become open space. Construction of Stonestown is expected to last around ten to twenty years. Once complete, both developments hope to create a new hub of density connected by public transit with the rest of the city.