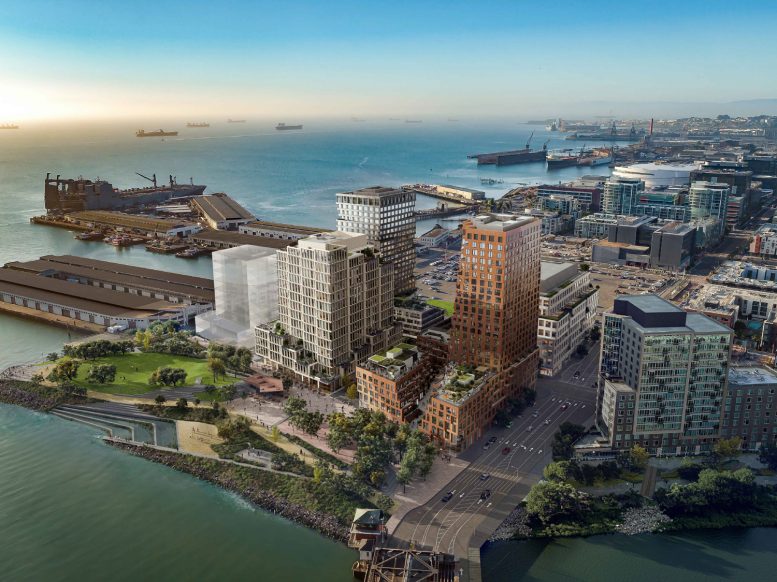 Construction work is moving forward at speed for Mission Rock, a dense mixed-use project reshaping 28 acres of former parking along the San Francisco waterfront in Mission Bay. Concrete is in place for the podium for The Canyon to introduce Mission Rock’s first housing across 24 floors. Next to The Canyon, facade installation has started for Visa’s new headquarters, as the financial corporation’s President, Ryan McInerney, recently reaffirmed plans to remain in San Francisco. 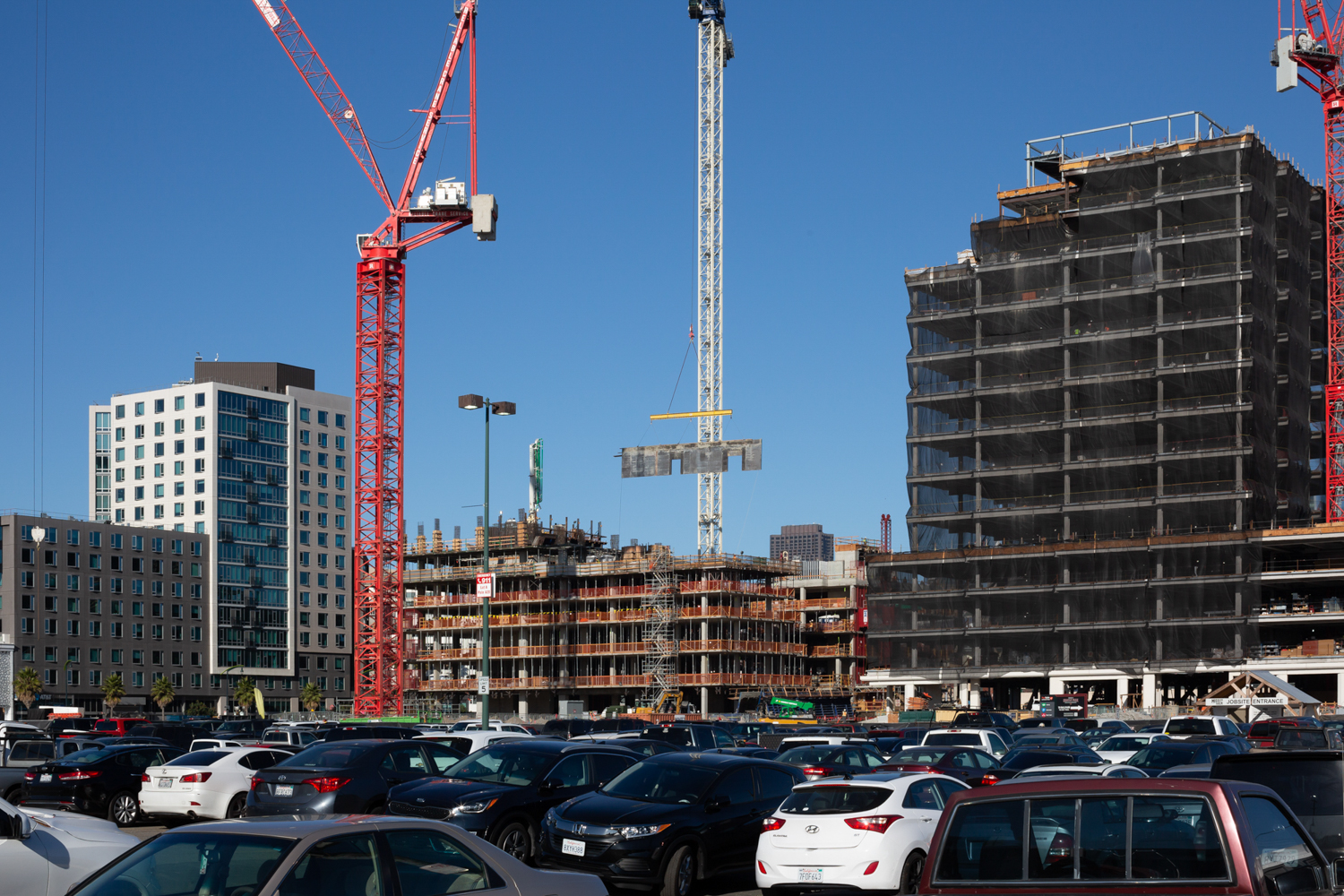 The Canyon construction progress seen from the existing parking which will eventually be redeveloped in future phases of Mission Rock, image by Andrew Campbell Nelson 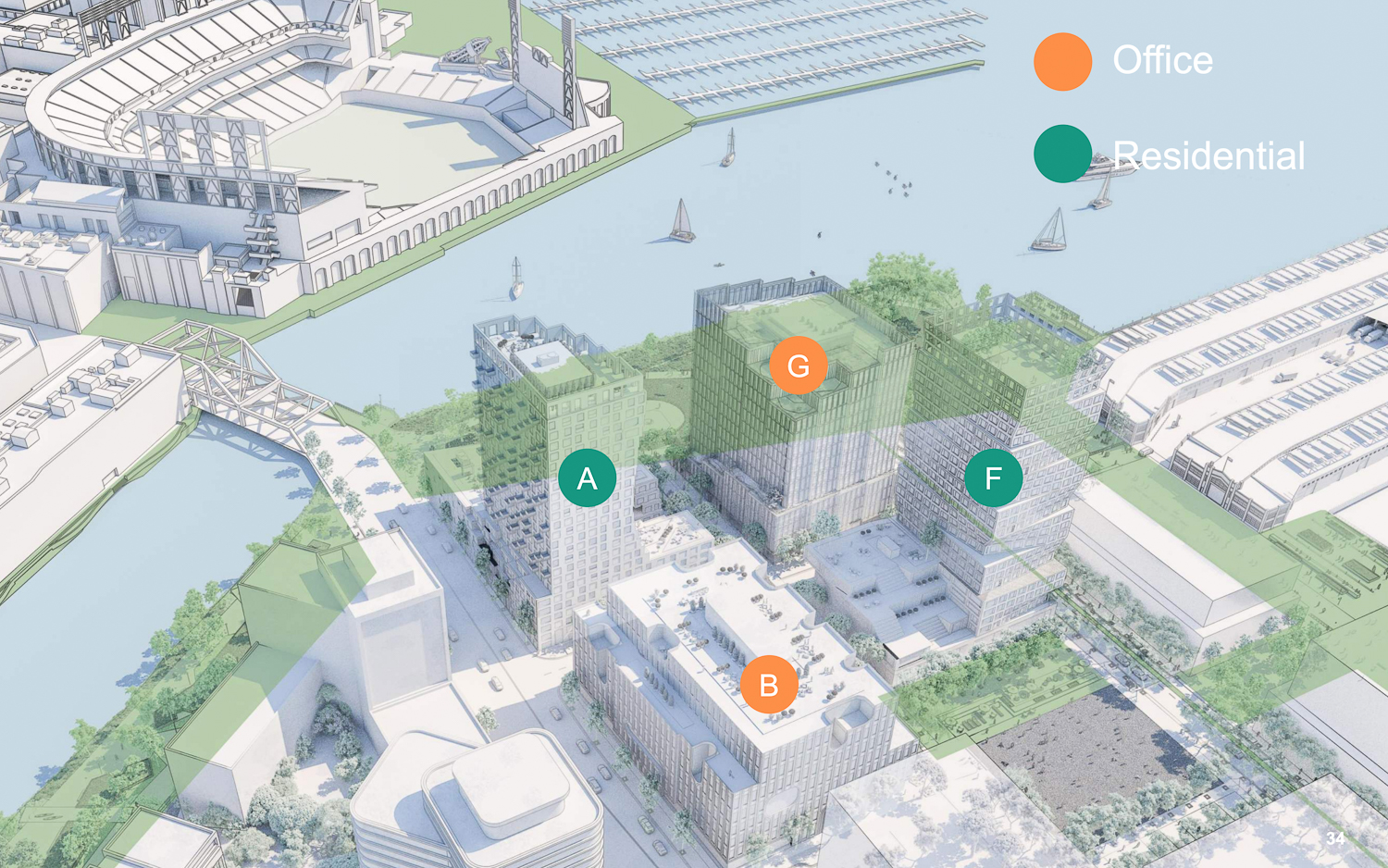 The Mission Rock development is led by Mission Rock Partner, a joint venture with Tishman Speyer and the property owners, The San Francisco Giants. At full build-out, the 28 acres is expected to create roughly 3.6 million square feet of floor area with approximately 1,200 new homes, up to 1.7 million square feet of office space, 150-250,000 square feet of retail or entertainment, parking for 3,000 vehicles, and the rehabilitation of Pier 48 for a new use. Landscaping across the project will open up eight acres of public parkland. Around two-fifths of all units are expected to be affordable housing to help lower and middle-income households. 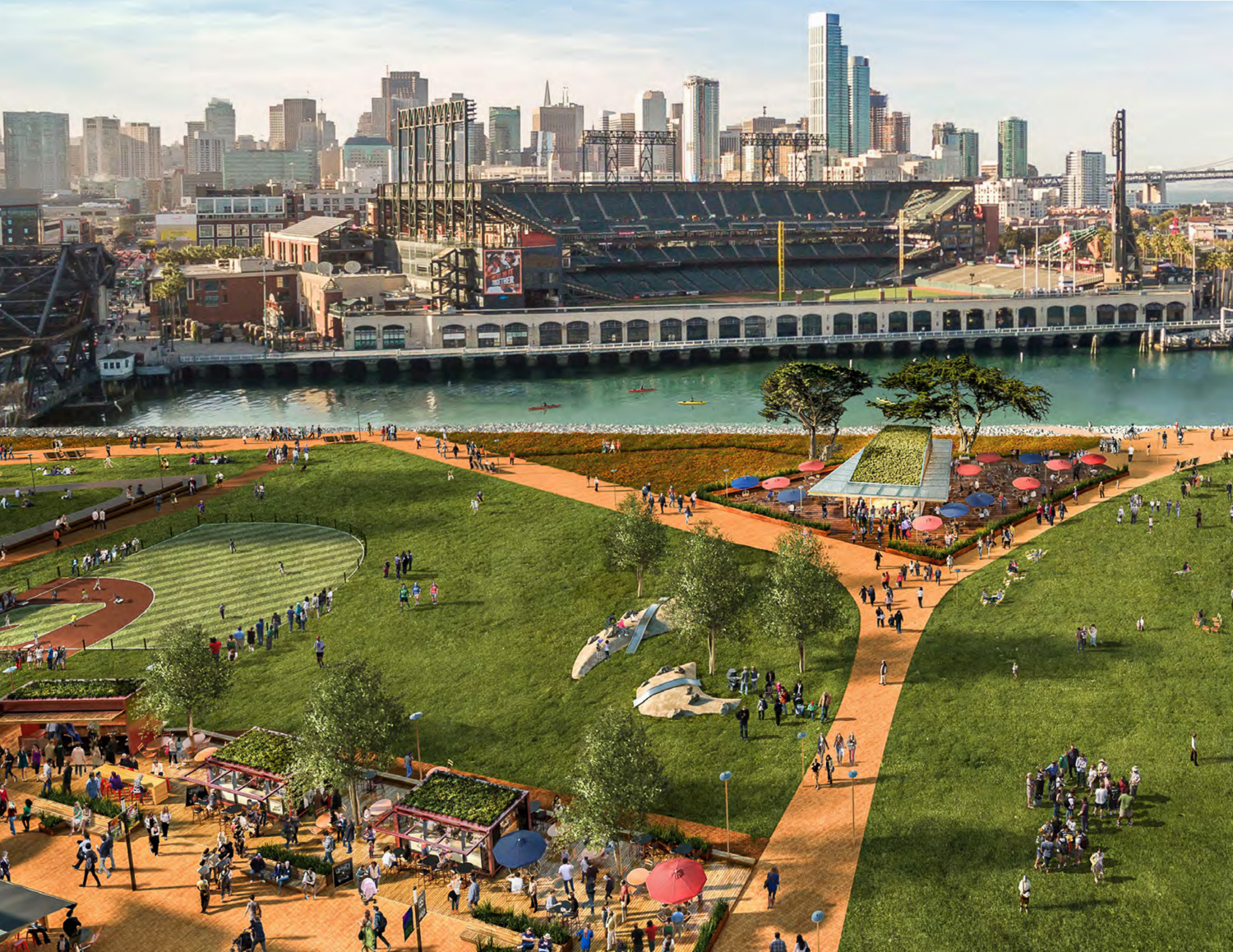 Phase One will also see the construction of a waterfront promenade called the China Basin Park. The park will be designed by SCAPE in partnership with Miller Company and Min Design. The urban landscape will look across McCovey Cove towards the Giant’s Oracle Stadium.

Parcel A: The Canyon

Overlooking the waterfront, The Canyon at Parcel A is a mixed-use tower with affordable and market-rate housing, shops, and office space. With 282 homes total, 179 will be offered at market rate and the remaining 103 as affordable housing. Across the building, 18,850 square feet will be created as open space.

Already, the structure’s 60-foot concrete podium expresses the whole structure’s eventual design inspiration. The Canyon is designed by MVRDV, an international architecture firm based in Rotterdam, a port city in the Netherlands. According to the firm, they took inspiration from the city’s “rigid grids with a daring natural topography.” The facade materiality was also inspired by the state’s unique rock formations.

San Francisco-based Perry Architect is the associate architect. GLS Landscape | Architecture is the landscape architect, BKF Engineers is the civil engineer, and Magnusson Klemencic Associates is the structural engineer. 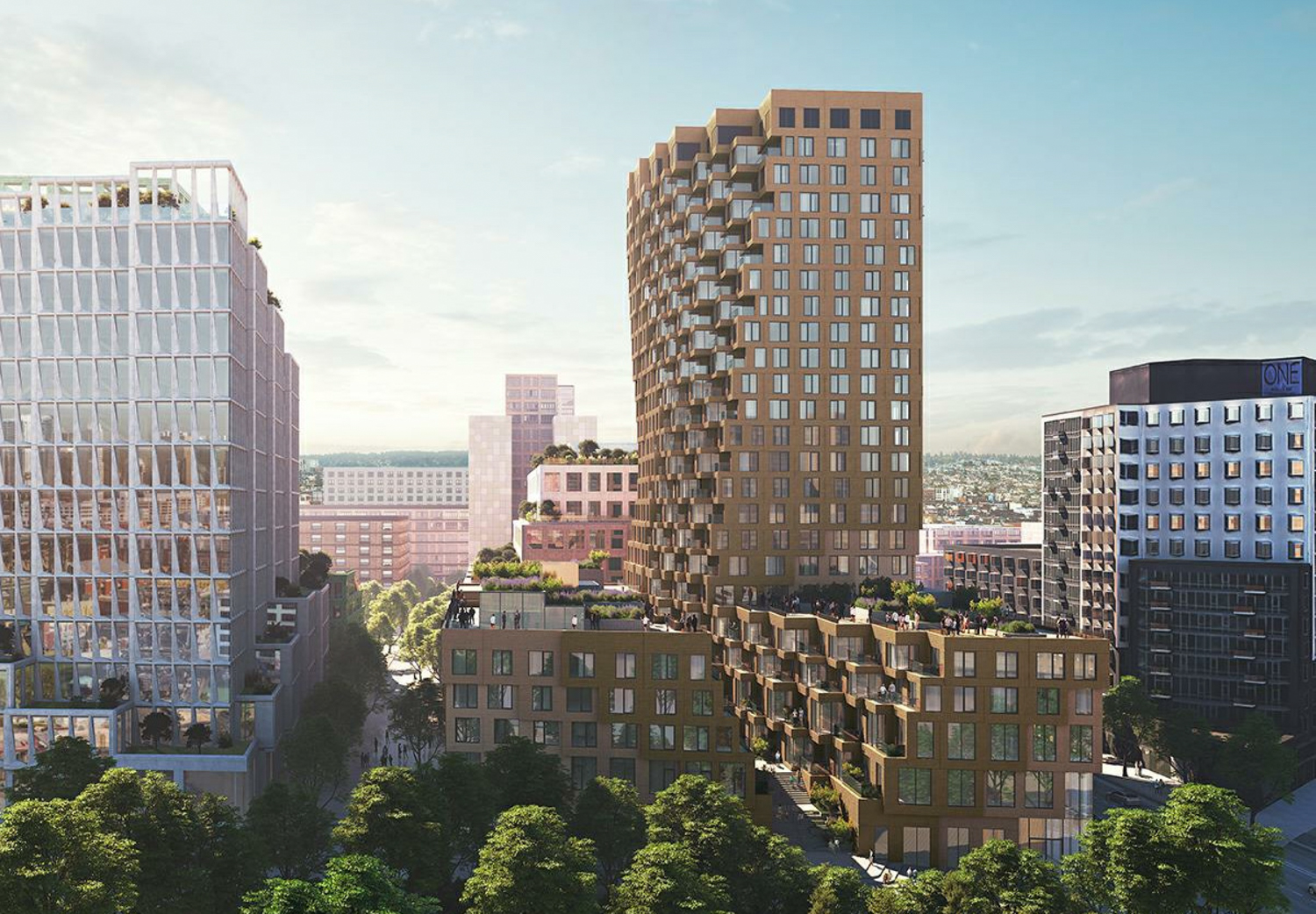 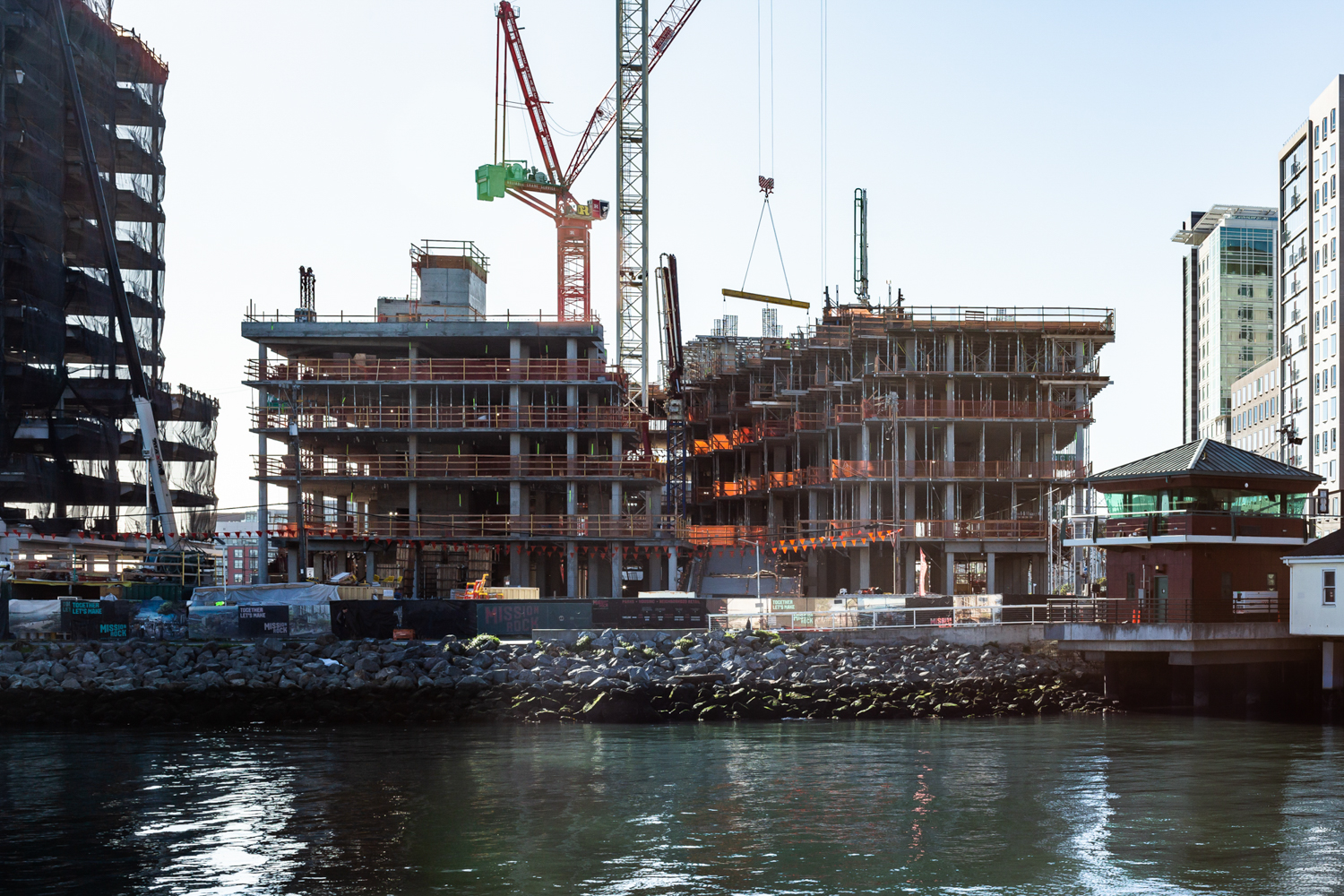 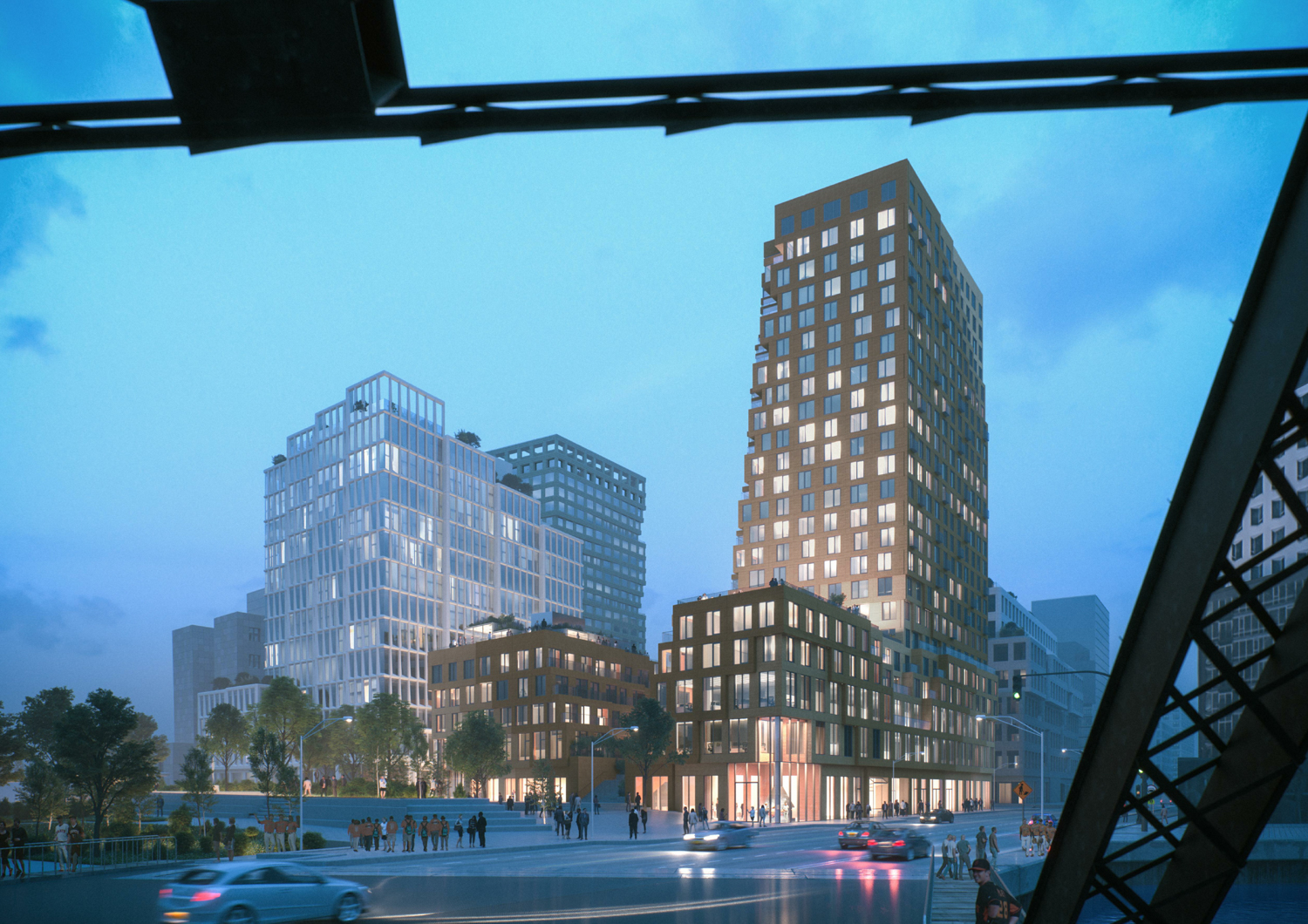 The Canyon at dusk, design by MVRDV 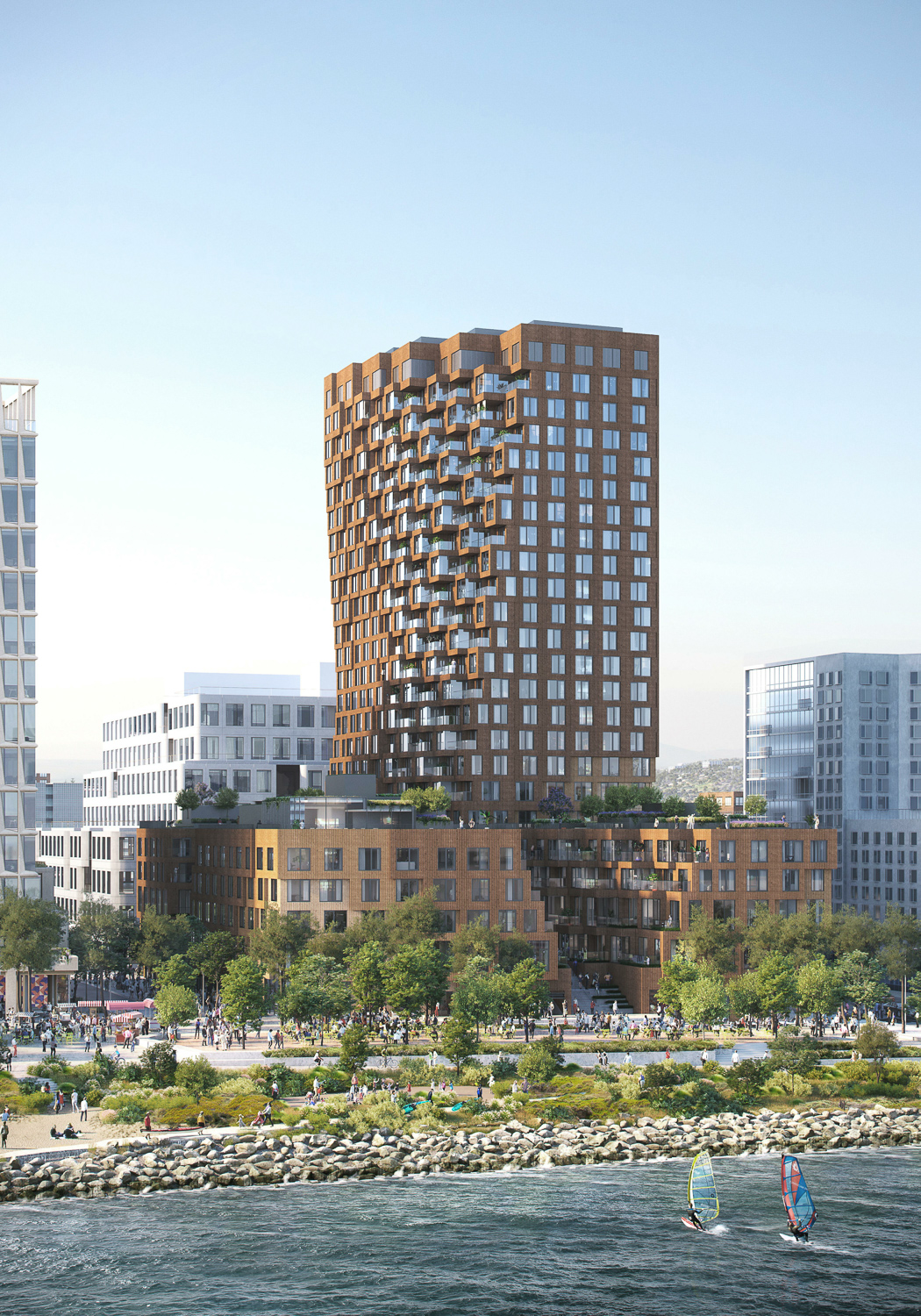 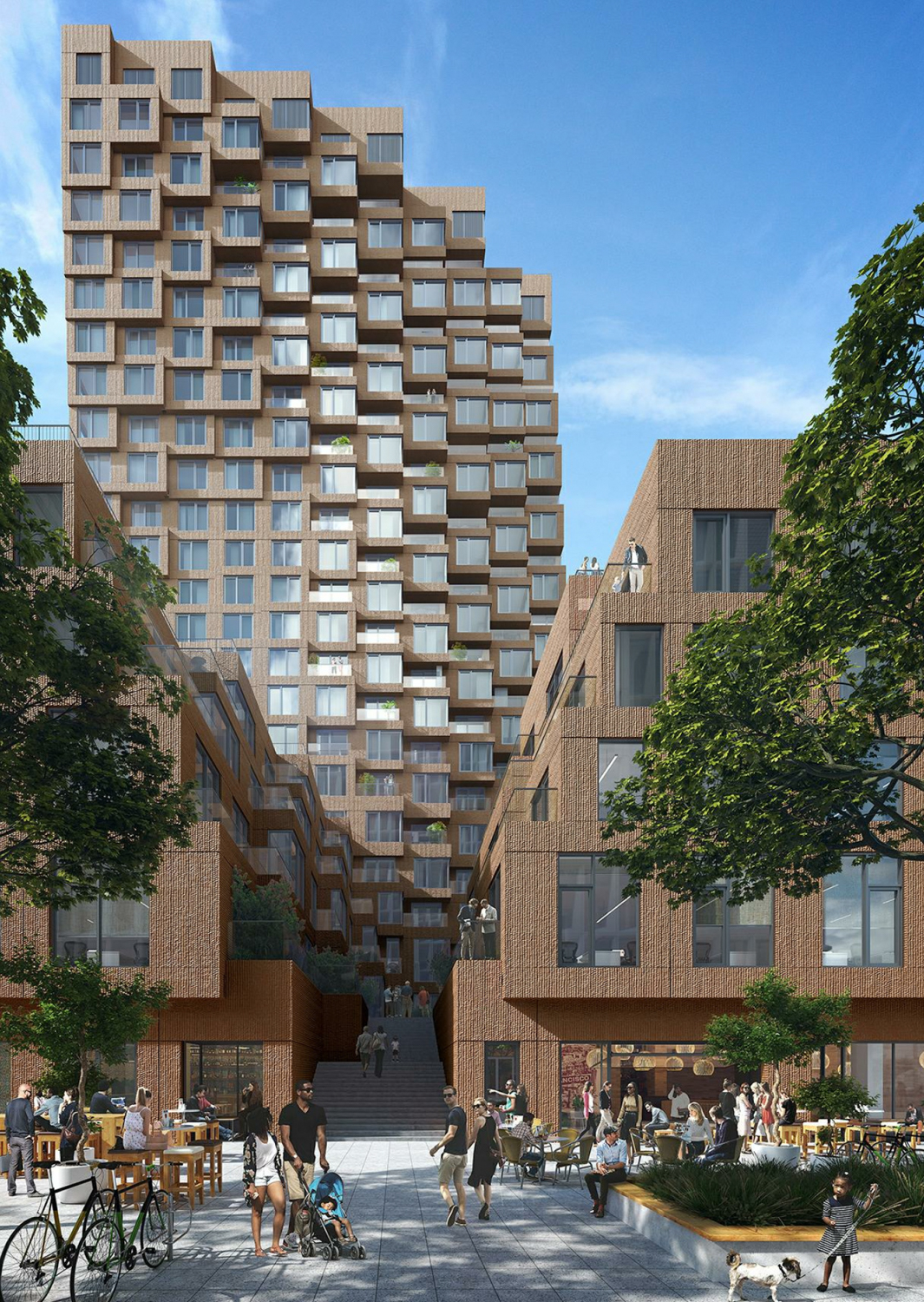 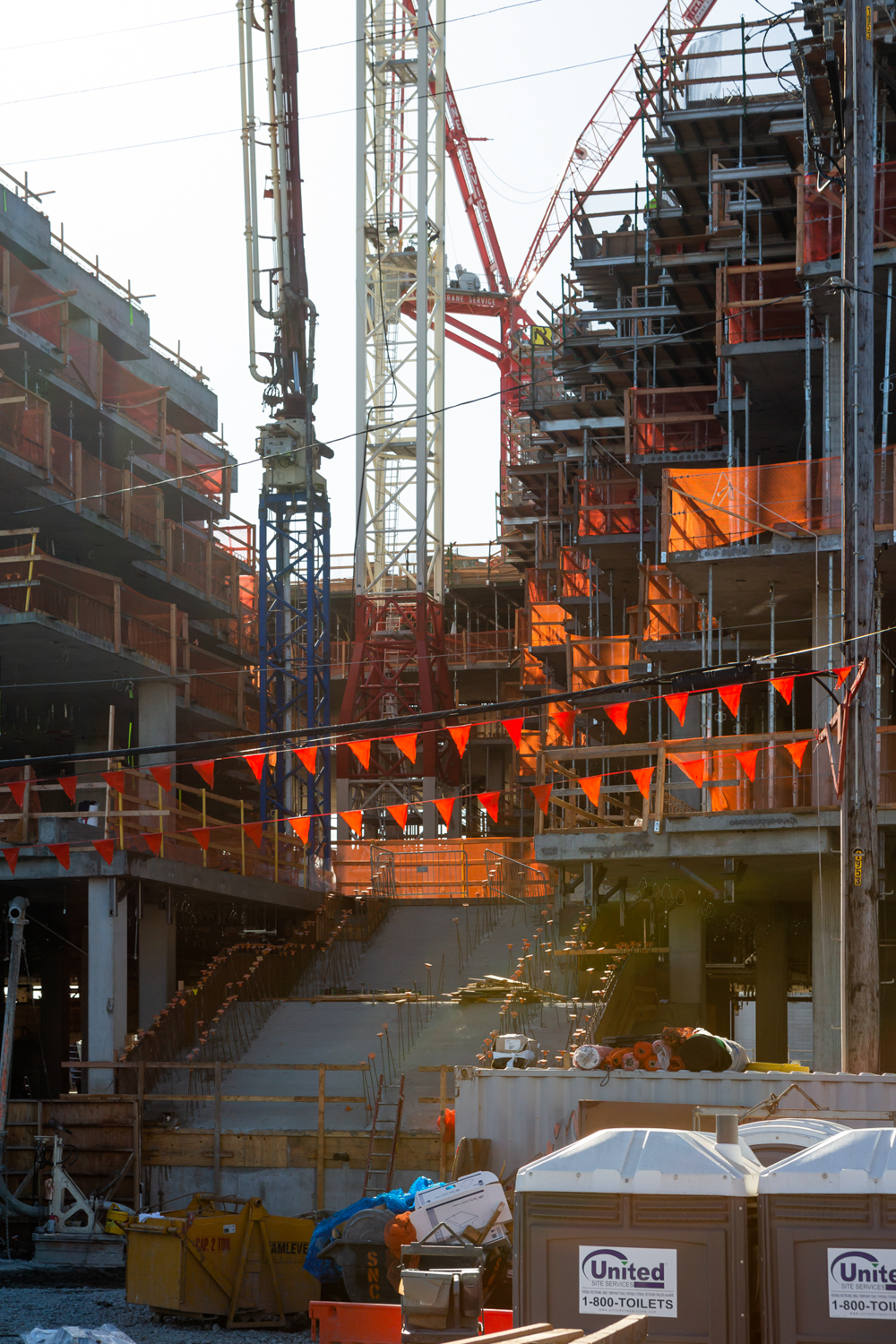 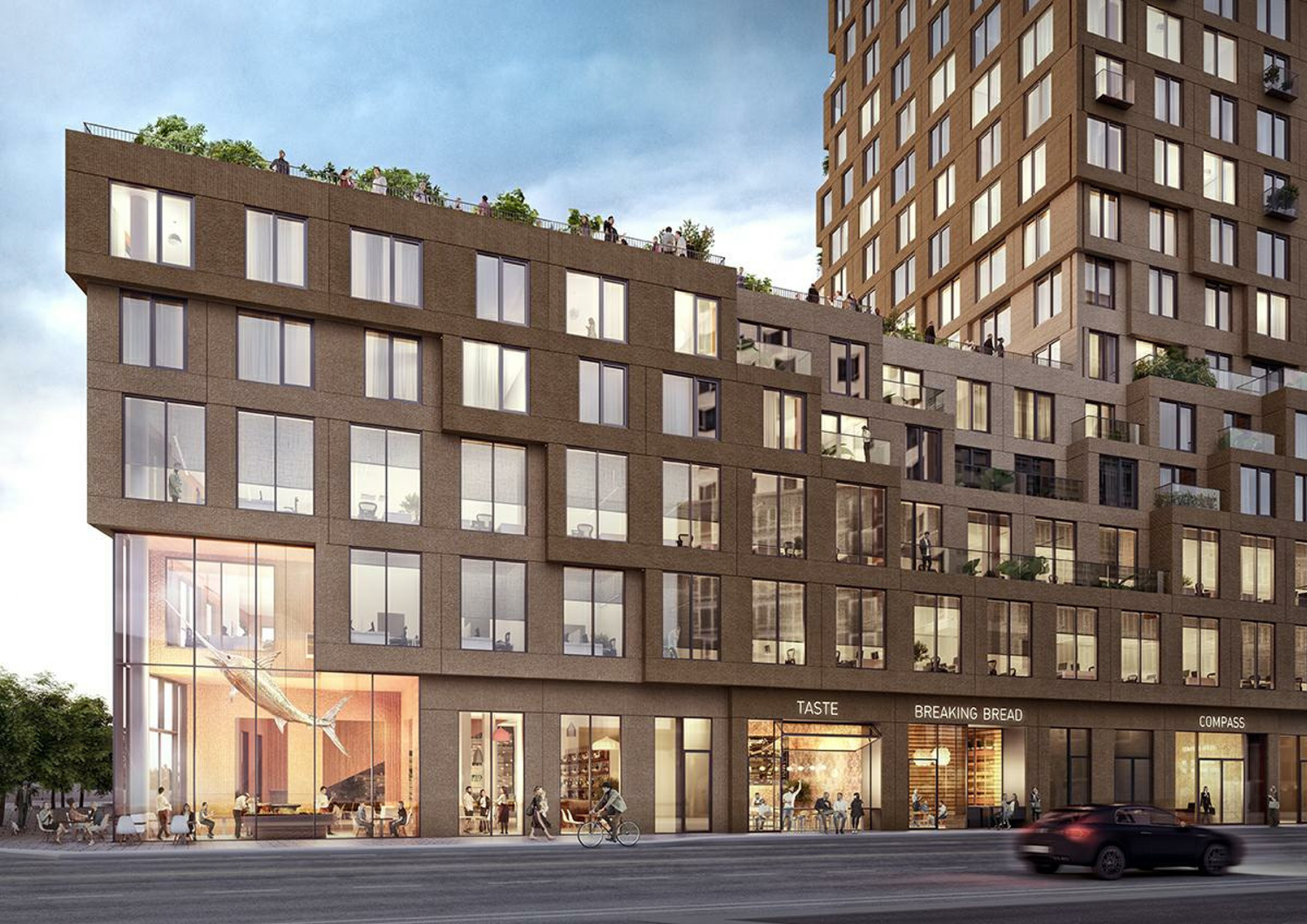 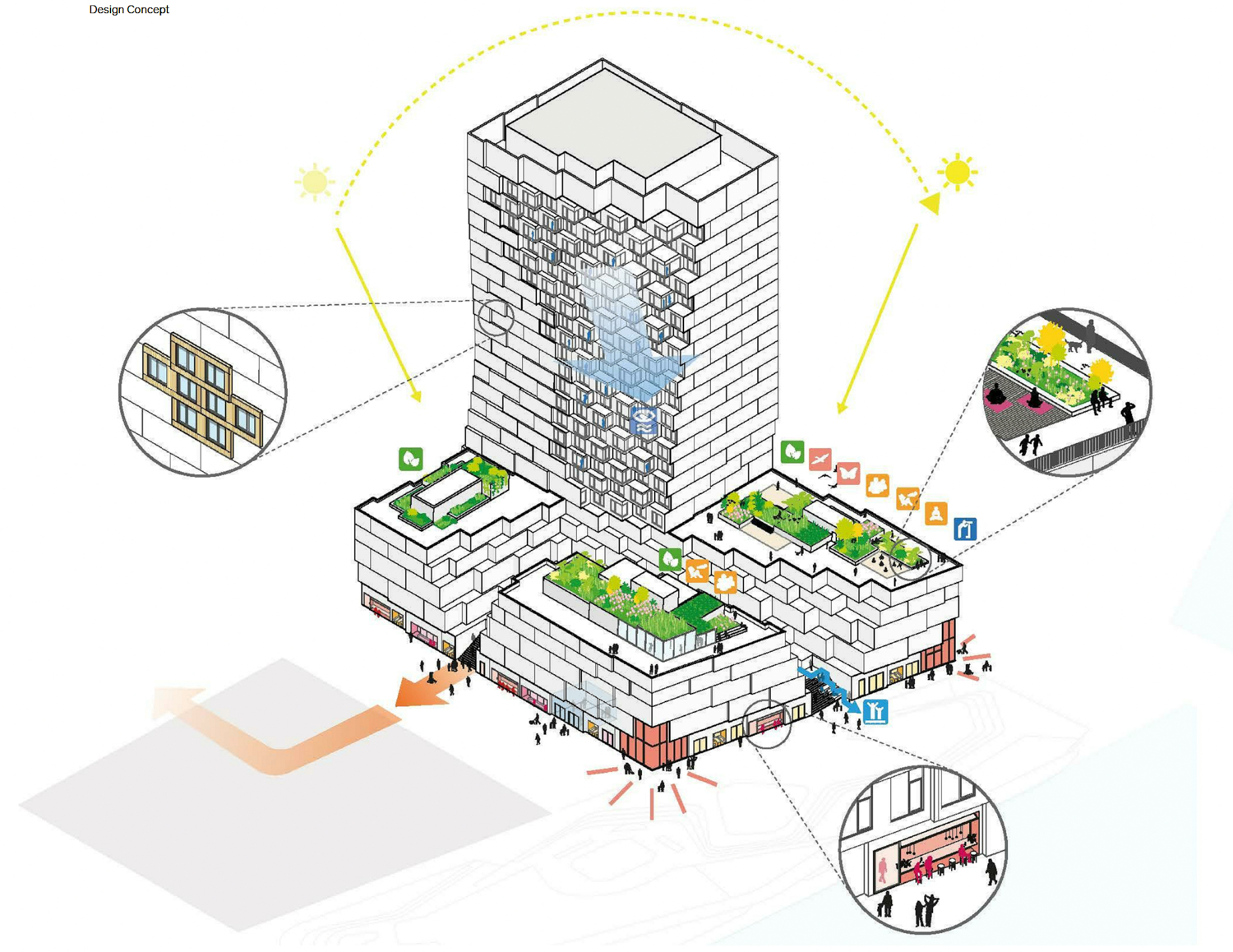 The Canyon elevation, design by MVRDV

The new headquarters for Visa has already topped out at Parcel G. Rising 209 feet above street level, the building will yield 299,600 square feet with 283,320 square feet for office use and 16,280 square feet for ground-level retail. Employees and retail guests will find 119 bicycle parking spaces, while employees can use the 24 lockers and four showers on-site.

Copenhagen-based Henning Larsen Architects is responsible for the design in partnership with Y.A. Studio and Adamson Associate Architects. GLS Landscape Architect is also to be the landscape architect. The project is aiming to receive LEED Gold certification.

Much like The Canyon, the design for Parcel G refuses to be monotonous. The base is wrapped with a stepped podium and small terraces populated with greenery. The stepped motif continues along the top of the 13-story tower, with each step coinciding with a setback in the facade.

In an exclusive interview with Business Journal’s senior reporter, Mark Calvey, the president of Visa confirmed that the firm will remain in the city. Amid speculation that many companies are moving out of the city, President Ryan McInerney reaffirmed their plans to move their headquarters from San Francisco to Mission Rock. The move was first announced in 2019 with a press release which also revealed that “Visa will completely redesign its Foster City campus into a state-of-the-art facility to create a collaborative and inspiring environment for our Product and Technology teams.”

Construction is expected to finish by late 2023, with a capacity for up to 1,500 employees. 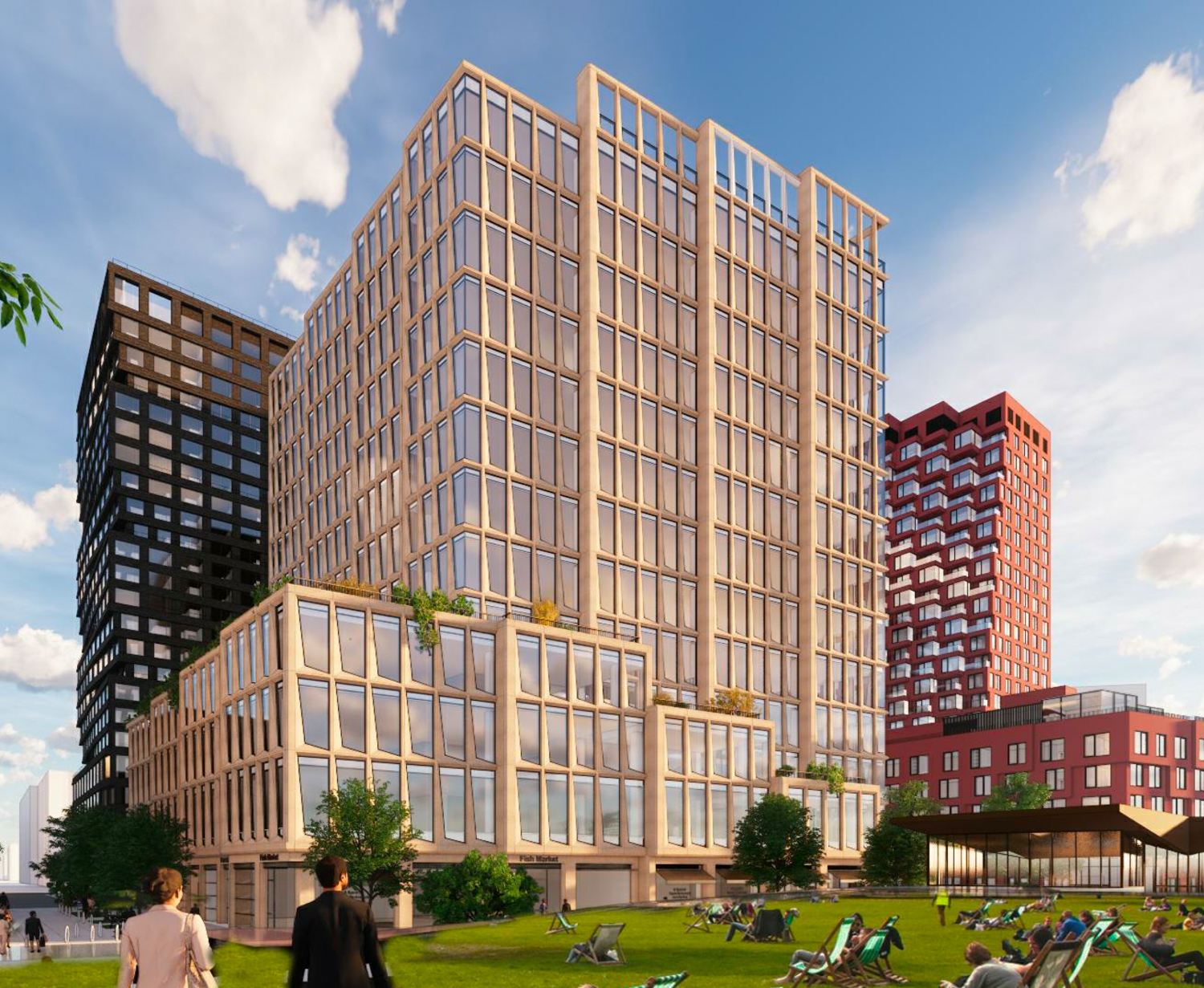 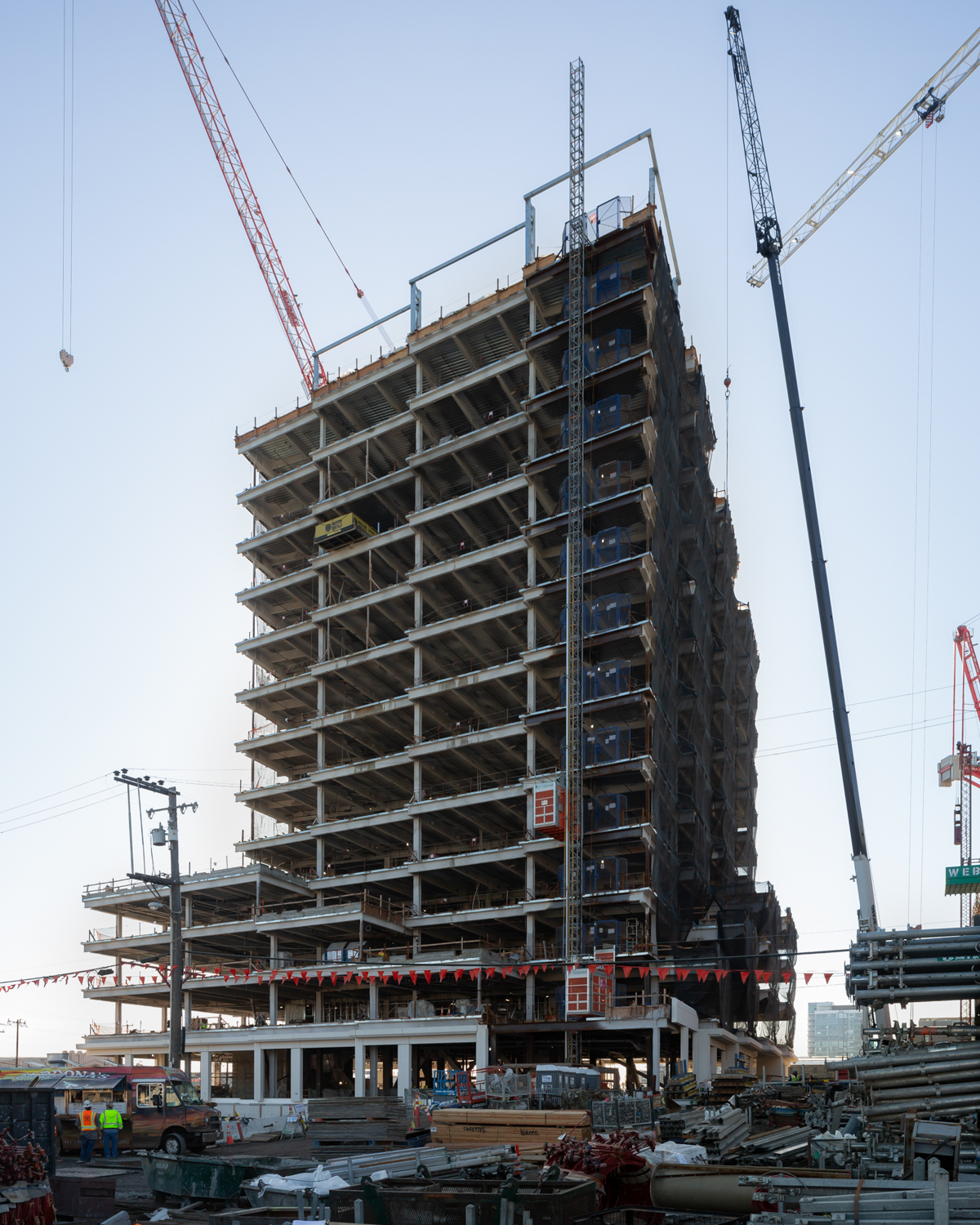 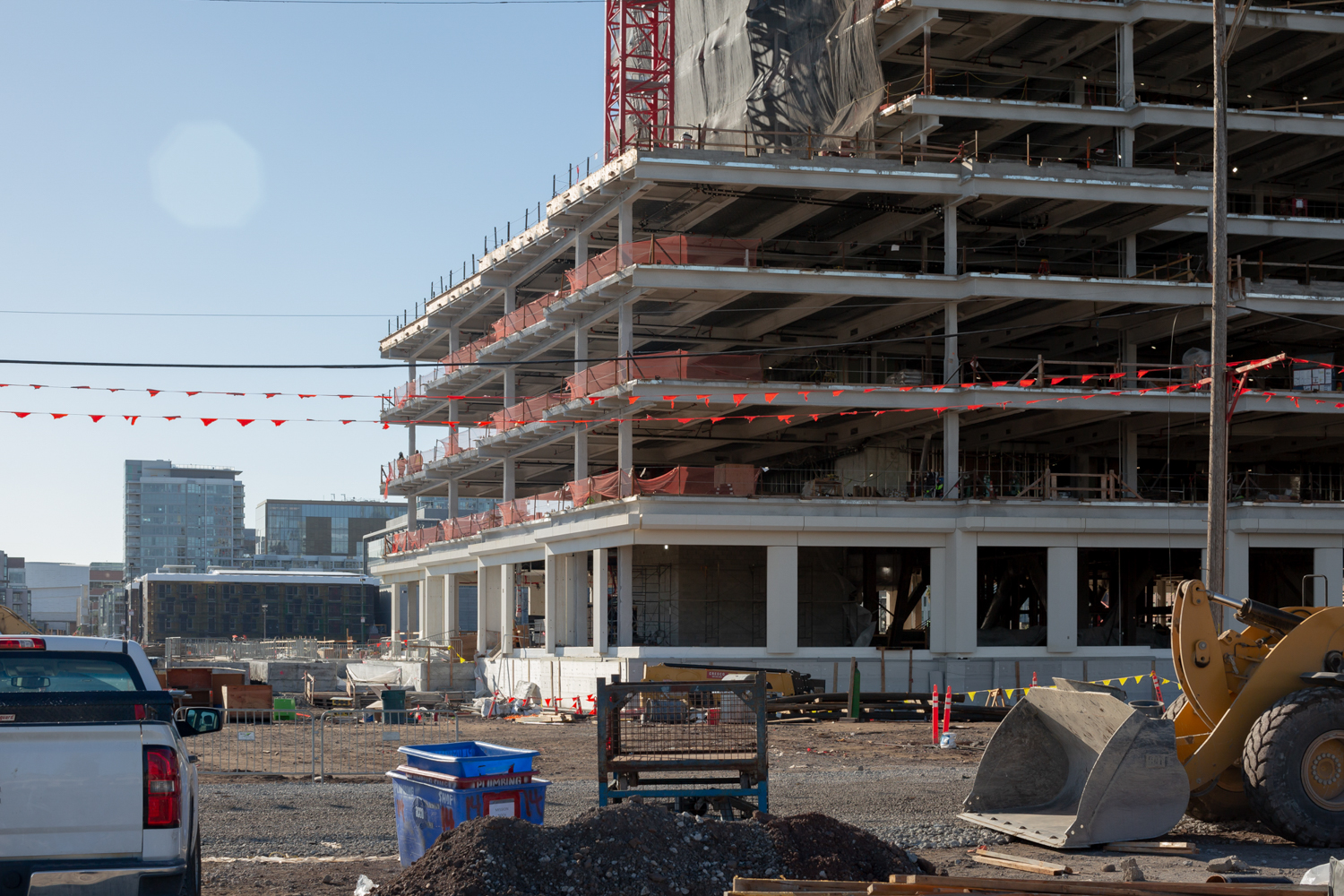 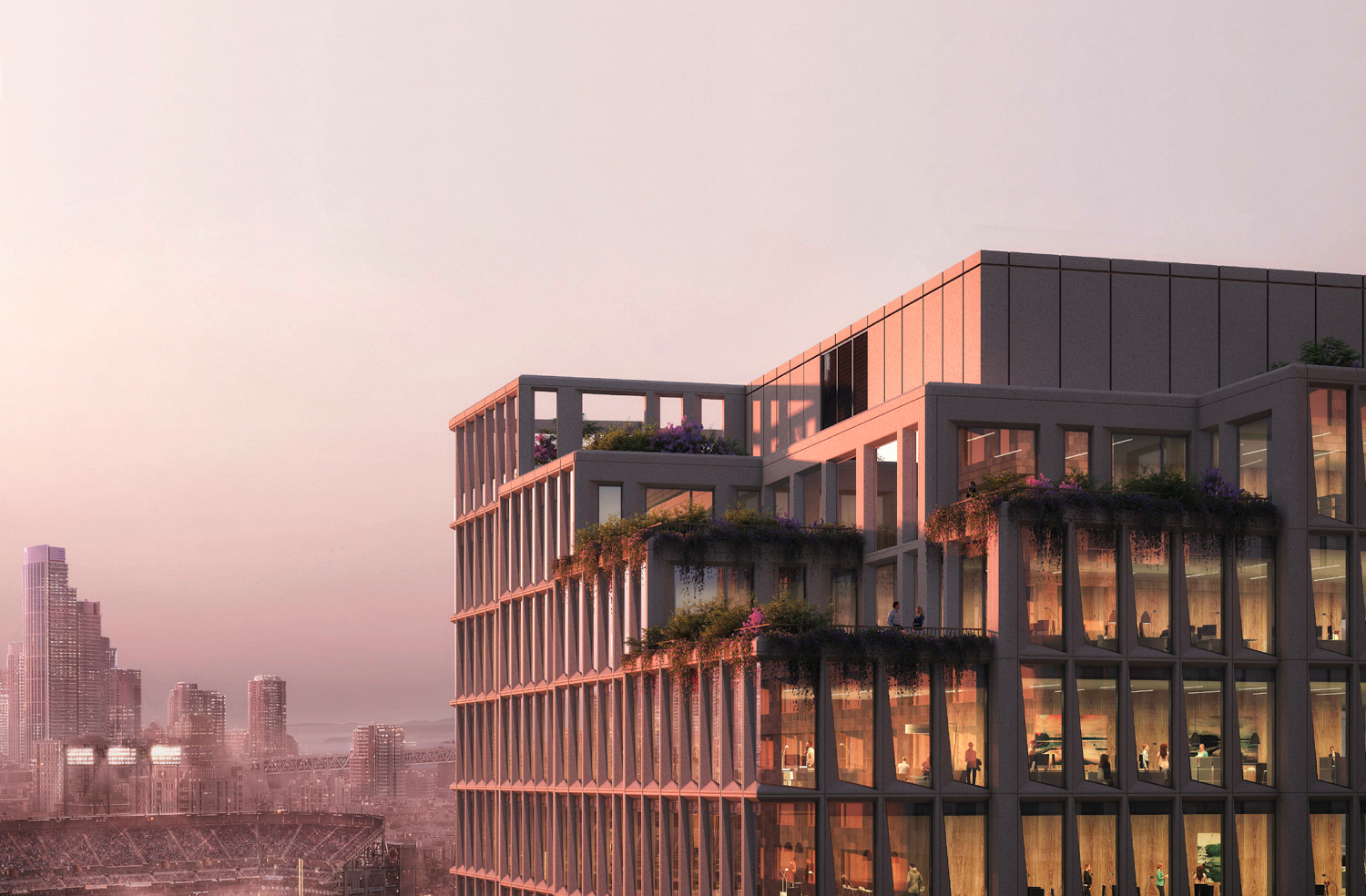 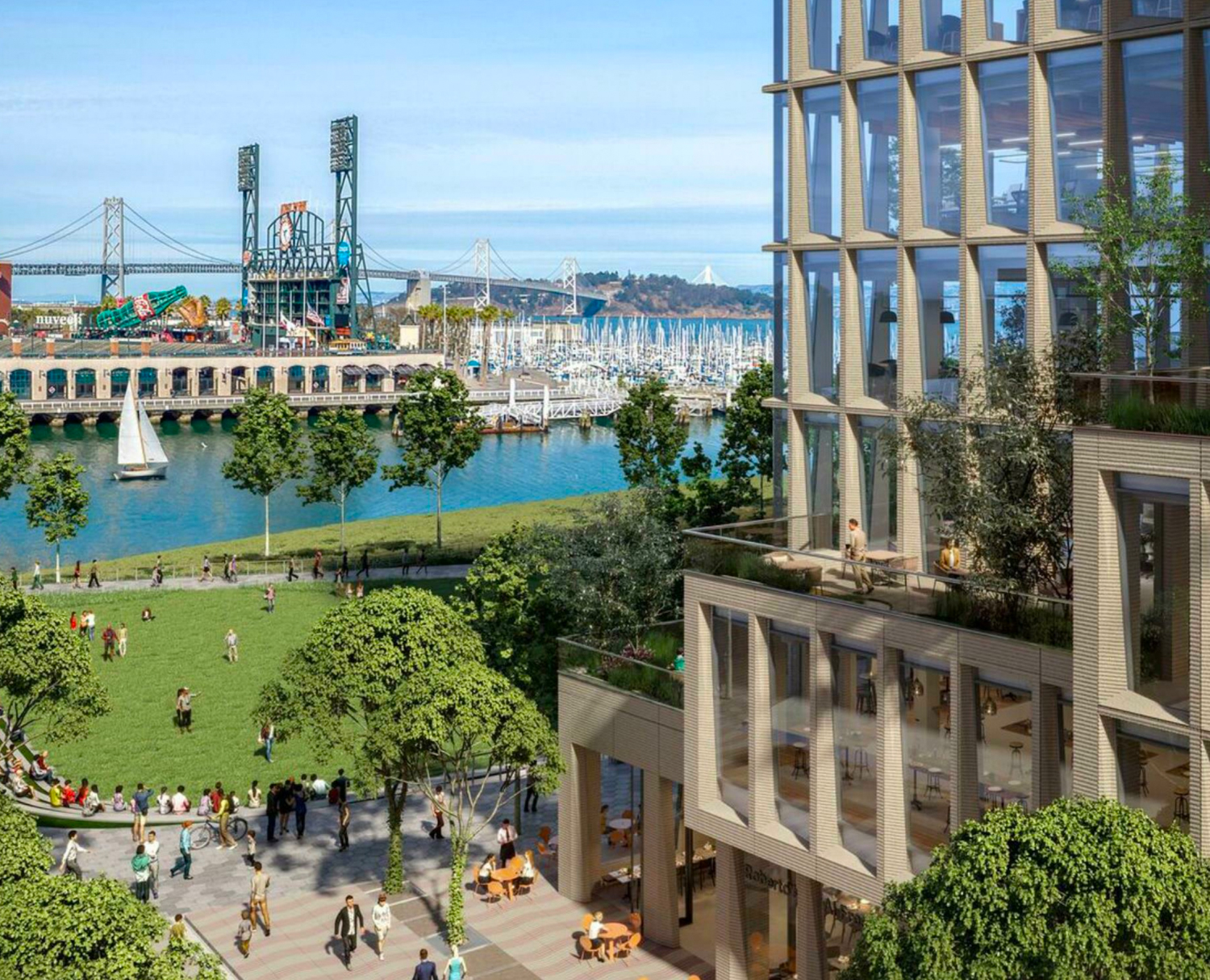 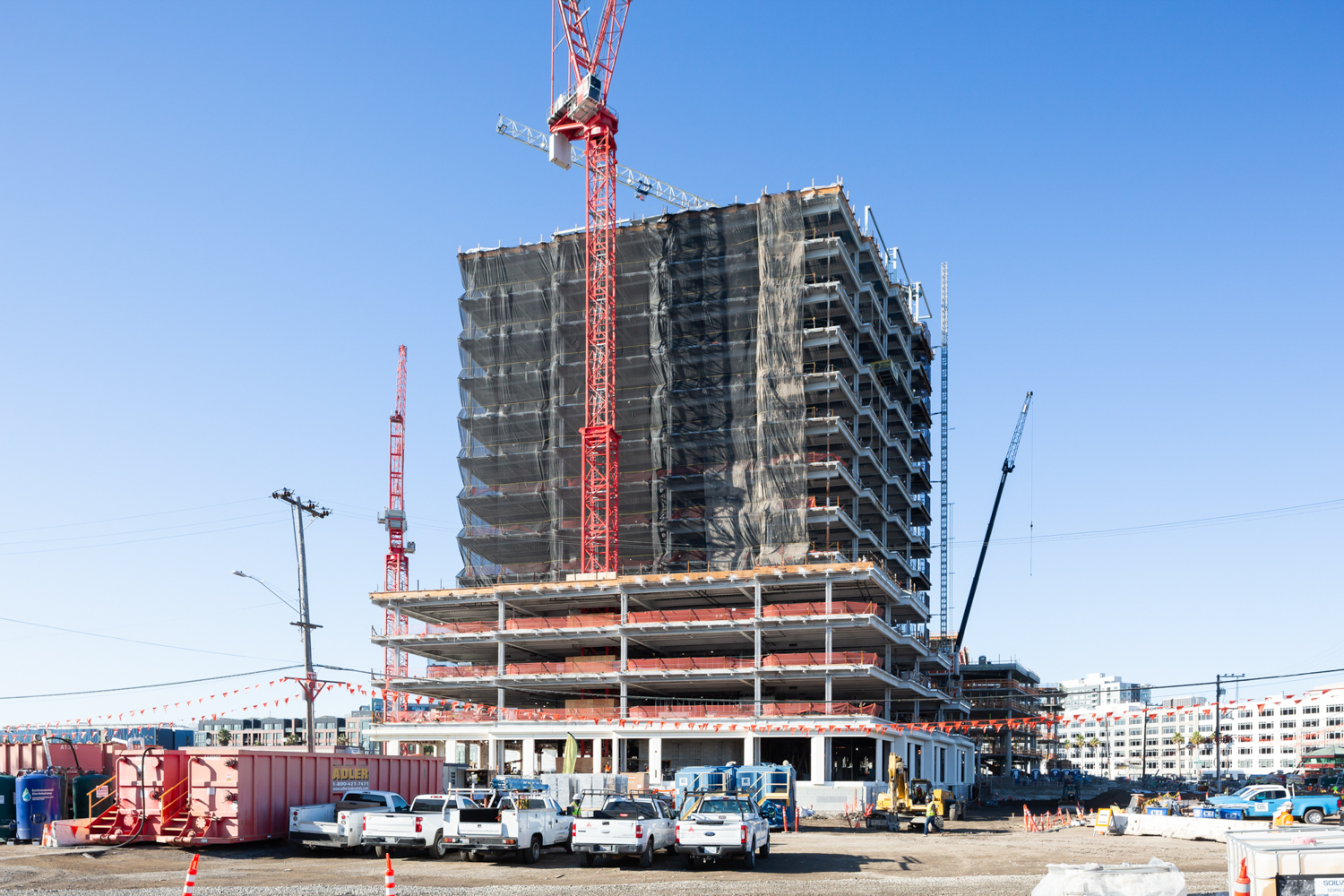 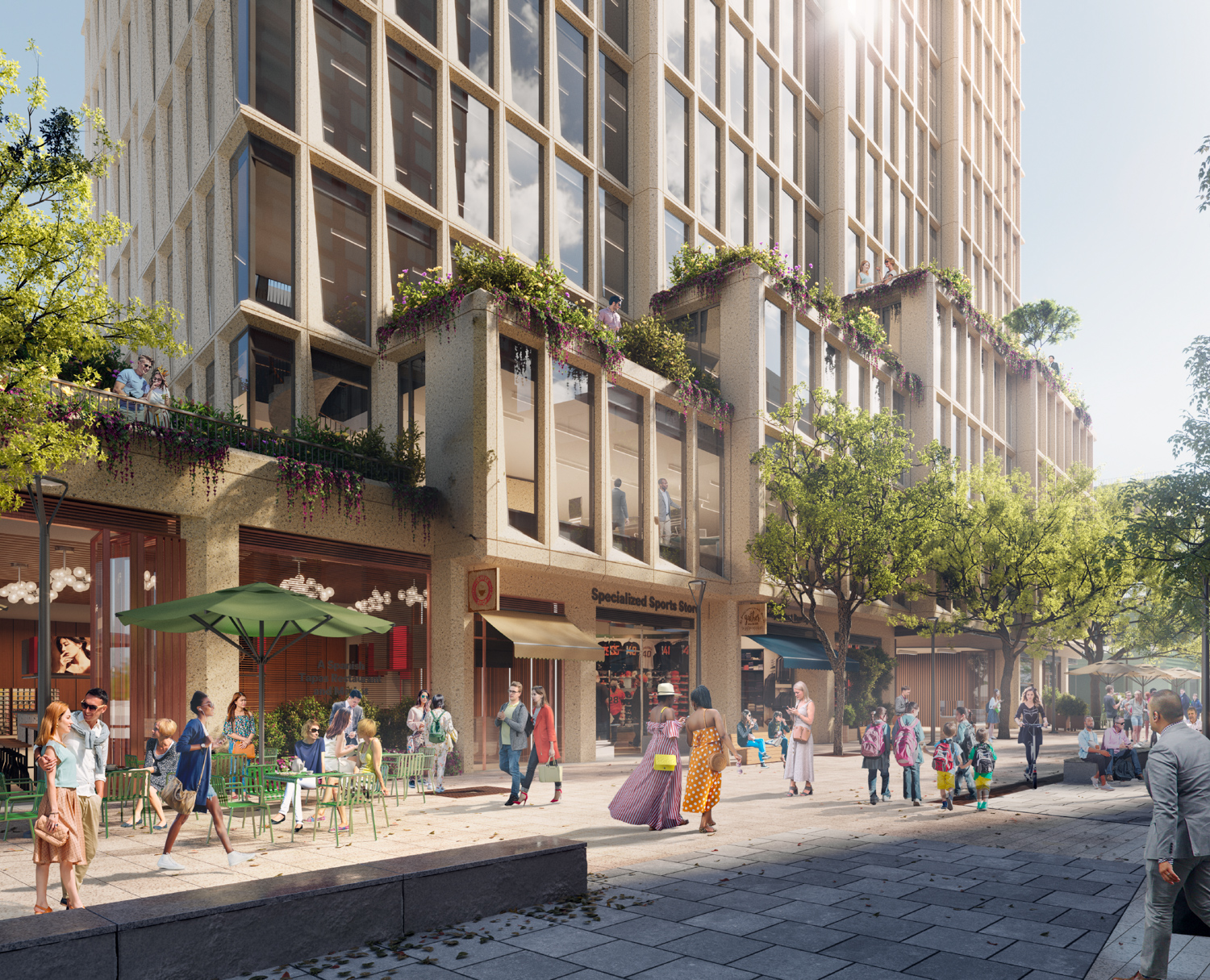 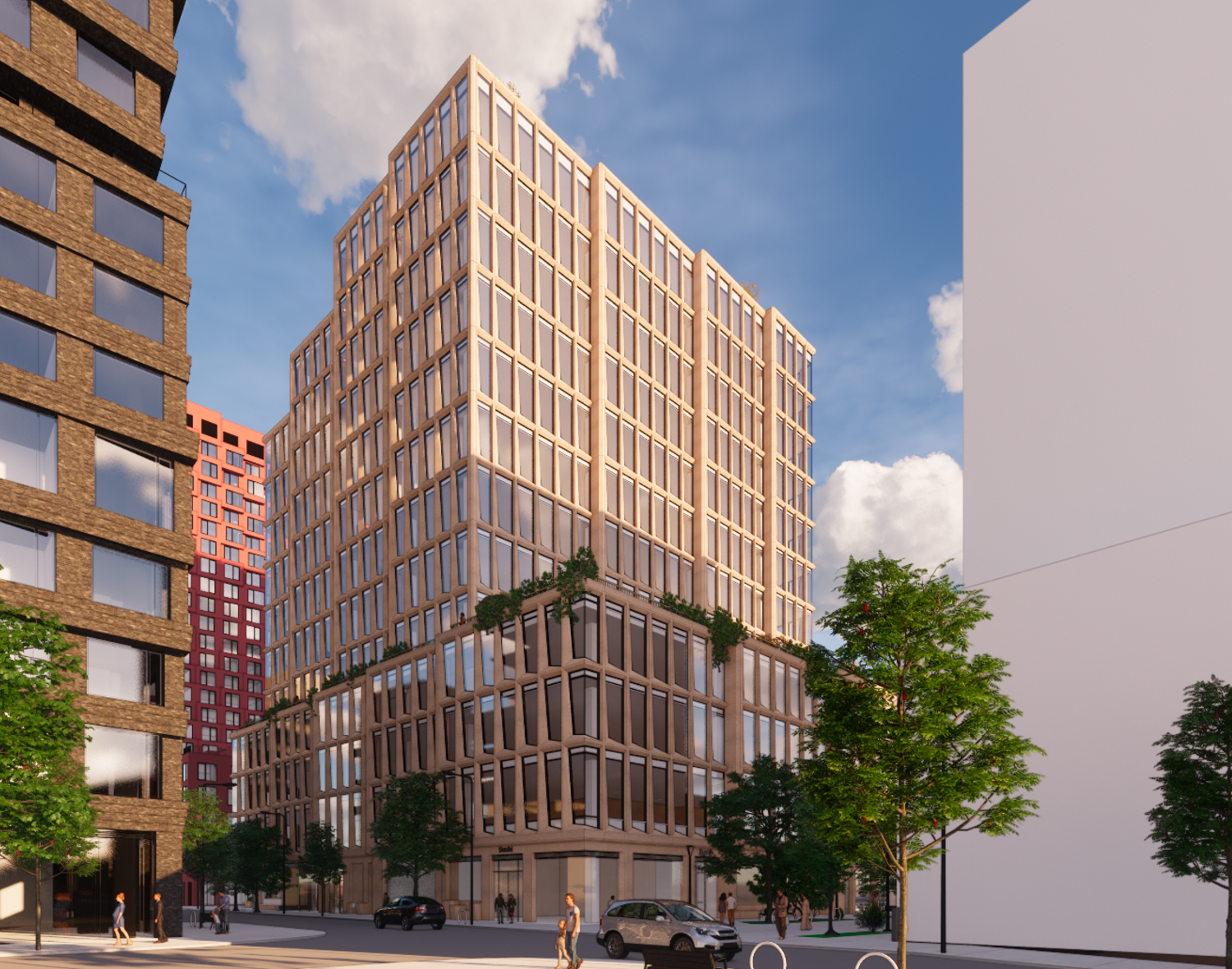 Parcel B by WORKac is an eight-story office building that is expected to host a biotech company. The architects collaborated with Y.A. Studio and Adamson Associate Architects. Breakthrough Properties will assist with the life science real estate. According to the project developers, crews have “recently completed pile driving and the superstructure is beginning.” The building is expected to be working on interiors by the final quarter of 2022. 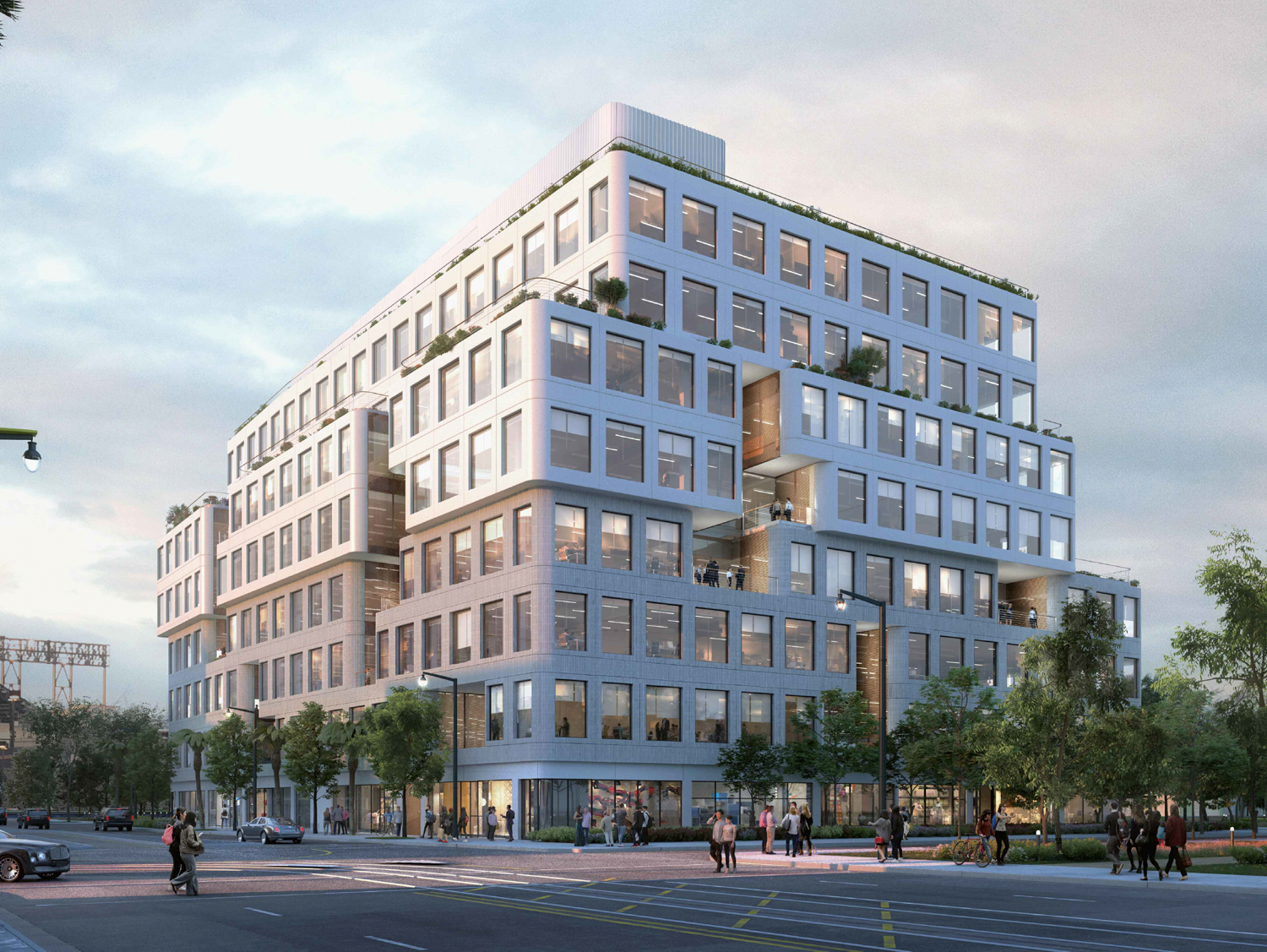 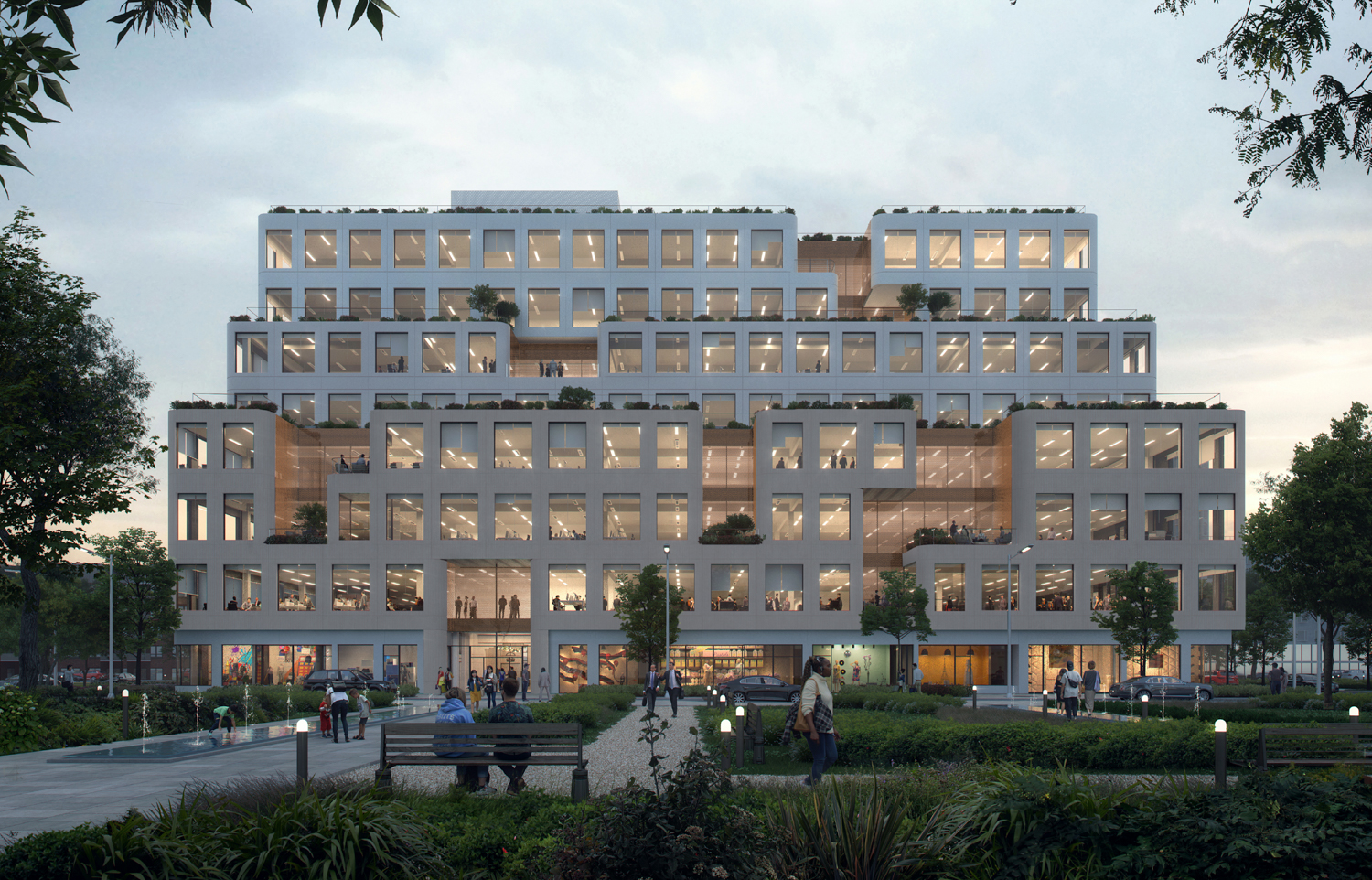 Mission Rock Parcel B, view from the shared public way at dusk 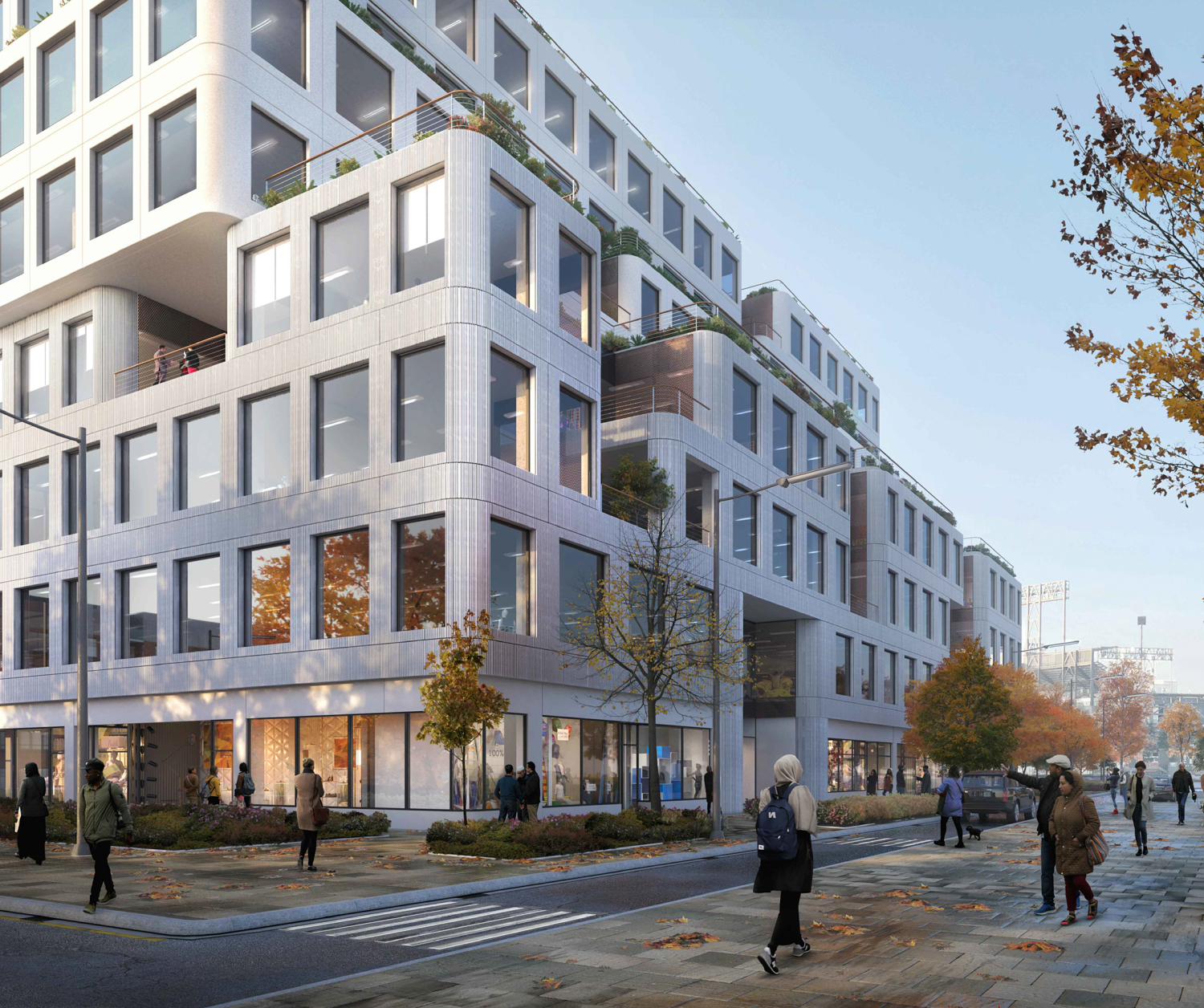 Parcel F is to be a 240-foot tall residential tower with 255 apartments and ground-level retail. The design architect will be Studio Gang, best known in the Bay Area for the flowing Bay Window design at MIRA. The following is a design description published by the design studio:

Reinterpreting the typical tower podium, the building’s base is carved with steps leading up to a mesa-like space with sunny planted terraces and raked seating. The terraces offer views of the activity in the main public square below. At ground level, shops and cafés bring their own unique character to their storefront, further contributing to the neighborhood’s lively public realm. The mesa also houses the amenity spaces for the entire neighborhood.

Construction has not yet started on Parcel F. 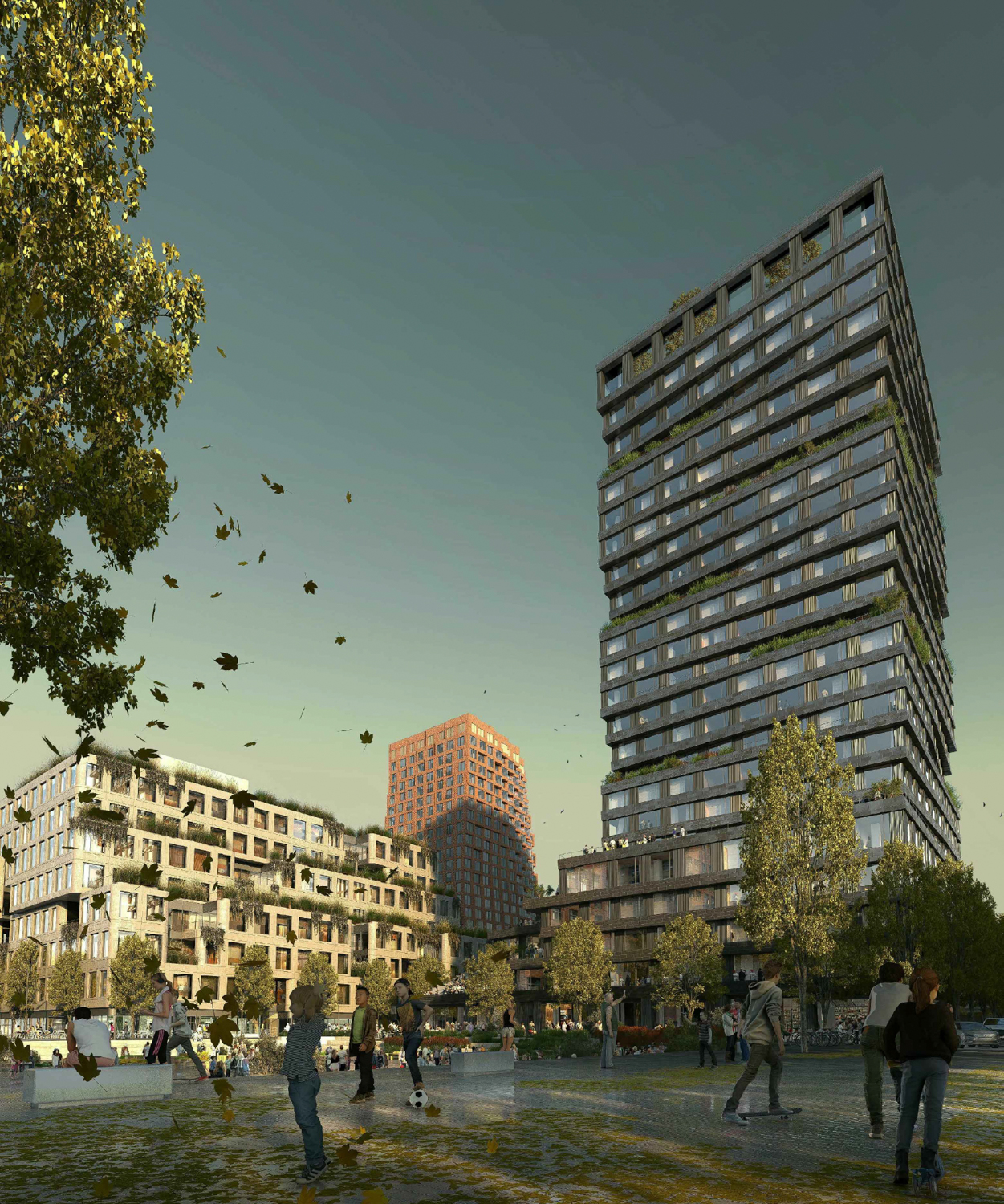 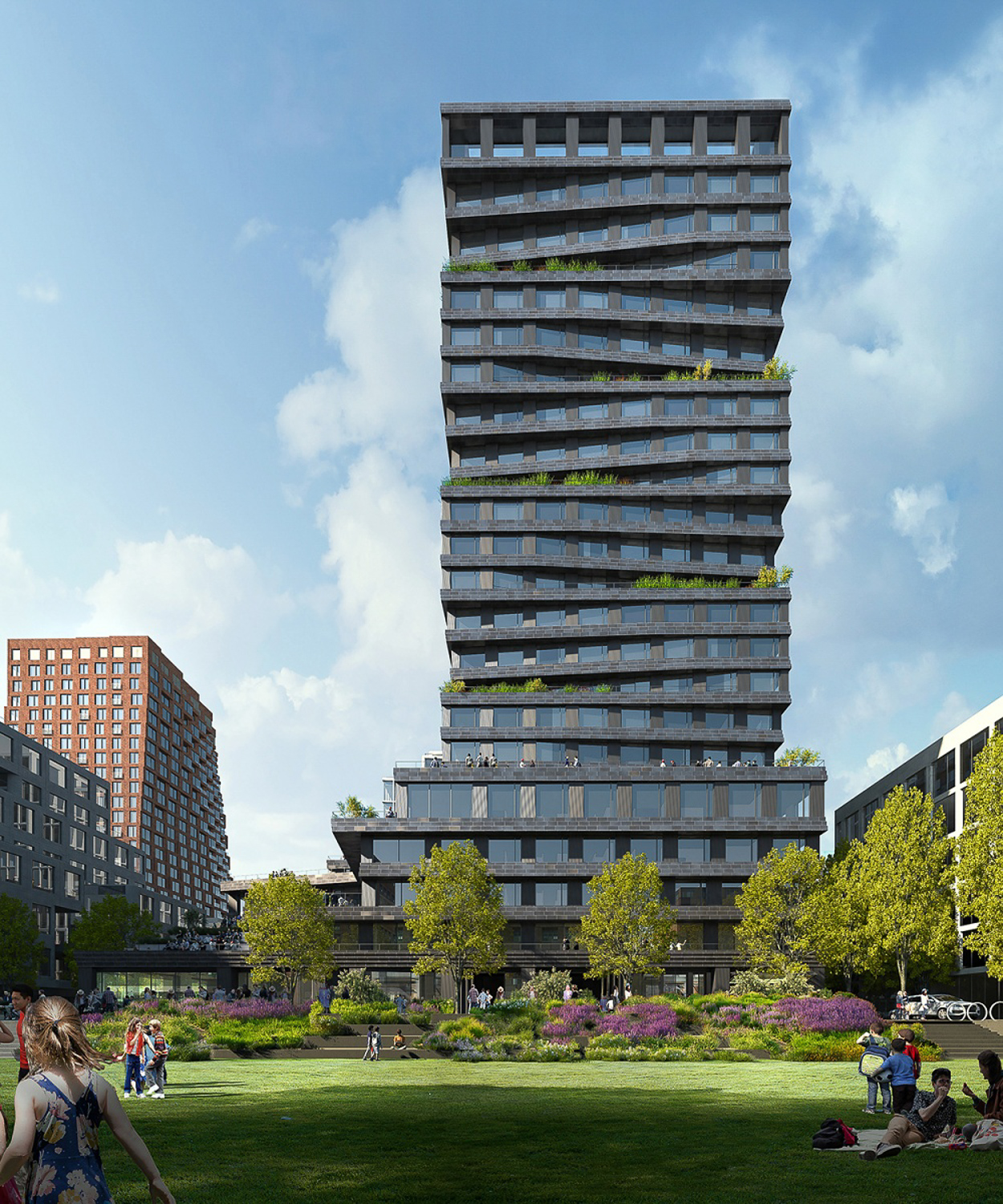 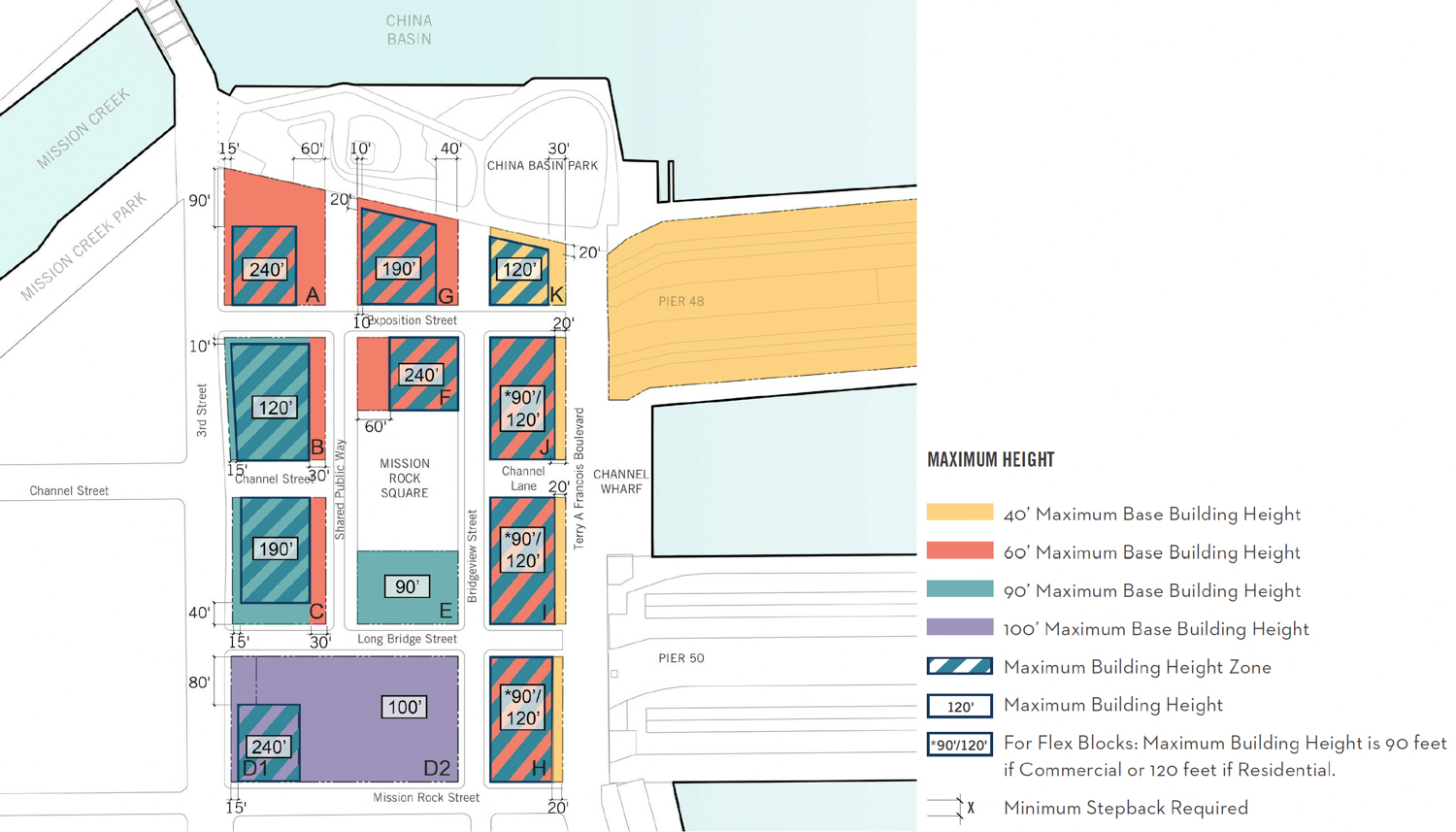 So far, only phase one of construction is underway. Parcels A, B, F, and G comprise the four-structure phase to create 537 apartments and over half a million square feet of office space. Parcel G is expected to be the first to finish, currently set for late 2023. According to building permits filed in late 2020, construction on phase one is expected to cost $380 million. However, that price tag excludes other major development costs.

Phases two, three, and four are expected later, with a certain schedule for construction not yet established. Phase two will create parcels C, D1, and D2. Phase three will include half of Mission Rock Square and Parcels E and K. Phase four will finish mission rock, creating parcels H, I, J, and Channel Wharf.

UPDATE: SFYIMBY has added more accurate information about the construction progress for Block B.